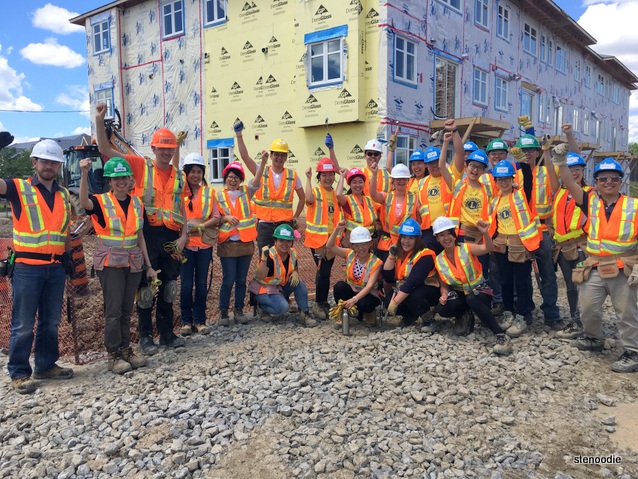 Habitat for Humanity at 140 Pinery Trail

This past Saturday, I participated with the Toronto Trillium Lions Club in our first volunteering event with the Habitat for Humanity to work on one of their current build sites.  “Habitat for Humanity Canada is a national, non-profit organization working towards a world where everyone has a safe and decent place to live.”

I had always heard of Habitat for Humanity as a wonderful non-profit organization where volunteers can help build houses and I was always intrigued to be able to help out with a project.  My wish came to fruition when the Toronto Trillium Lions Club decided to pick this as their next event to volunteer and participate in.  I RSVPed “yes” right away when I saw the event come up because I was interested in doing this for the first time.

Luckily, our team was able to reach our fundraising goal of $2,000 ahead of the Saturday in which we were going to go to the build site.  This goal attainment allowed us to have a pizza lunch, habitat T-shirt, and online photos of our day (the site coordinator would take them for us).  100% of the money raised went directly to the building project.  I’m really glad that we were able to pull through as a team to raise $2,123. 🙂

On the Monday, Priscilla and I carpooled to the site at 140 Pinery Trail.  (Thanks for driving, Priscilla!)  Once there, we would be helping out with the construction of 140 Pinery Trail,  the largest building project in the organization’s history, a 50 unit townhouse development!  It was quite exciting!  We would be there from 8 a.m. to 4 p.m.  We made sure to dress appropriately by wearing long pants, socks, and a T-shirt (although long sleeves were recommended). 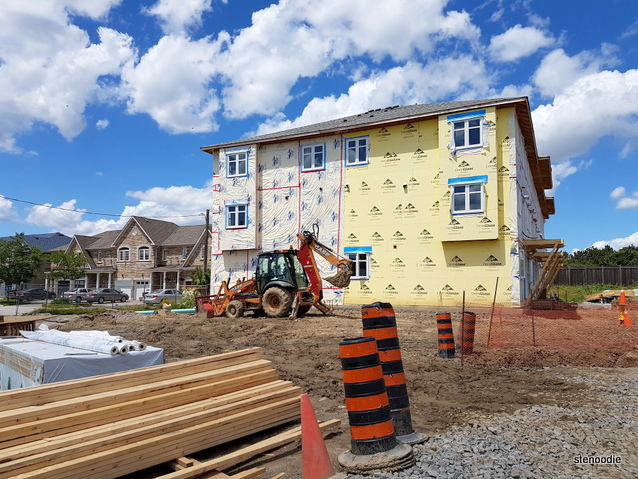 The Phase 1 building of 140 Pinery Trail

We arrived early before the start time of 8 a.m. (at around 7:45 a.m.).  We were actually the first ones there!  We took advantage of this by taking some selfies in front of the sign and of the site.  I also checked out the porta potties at this time. XD 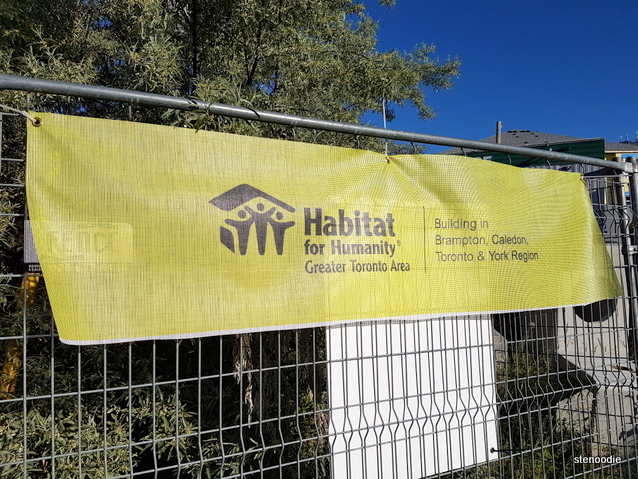 Habitat for Humanity banner outside the site

We were in for a treat of a day.  It had been raining cats and dogs the previous day and even throughout the week there had been substantial scattered rain clouds as well.  For this Saturday on June 24, we were treated to beautiful and clear skies and temperature at a high of 26 degrees.  It was the perfect weather to be working on anything outdoors! 🙂 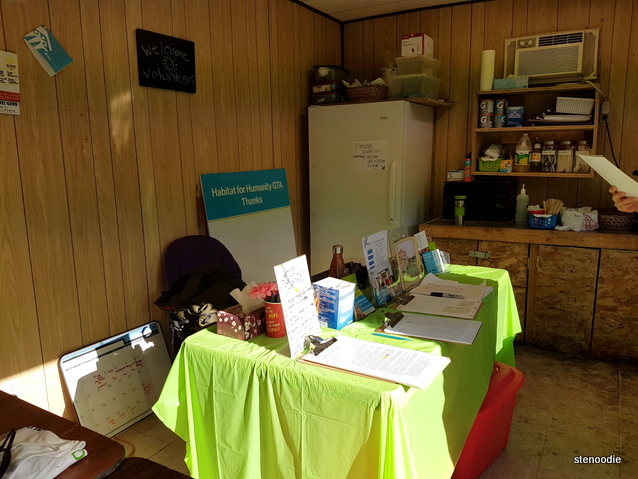 The sign-in desk at the trailer for volunteers

Once the club members and other volunteers arrived by 8 a.m., we got suited up.  In fact, Laura, the Site Volunteer Coordinator, greeted us first since we were early.  She took us to the volunteer sign-in desk in the trailer and we read the waiver and signed in.  From there, we wrote our name on a sticker, chose a hard hat from the big bin to wear (stuck the sticker to the hard hat), and then suited up with steel-toe safety boots, a tool belt, safety goggles, safety vest, and gloves.  I liked how they had all of this equipment available for us so volunteers wouldn’t have to worry about getting something like safety boots in order to be able to volunteer.  We also picked up a hammer that we would be needing for the day.

I found the tool belt so handy because even though I put my giant water bottle in one of the pockets, it didn’t feel heavy at all since the weight was against my hips.  Now I can understand why construction workers can put a lot of tools in their tool belts and yet not feel too burdened down by the weight.  The hammer also hung securely in its own hook on the left. 😀 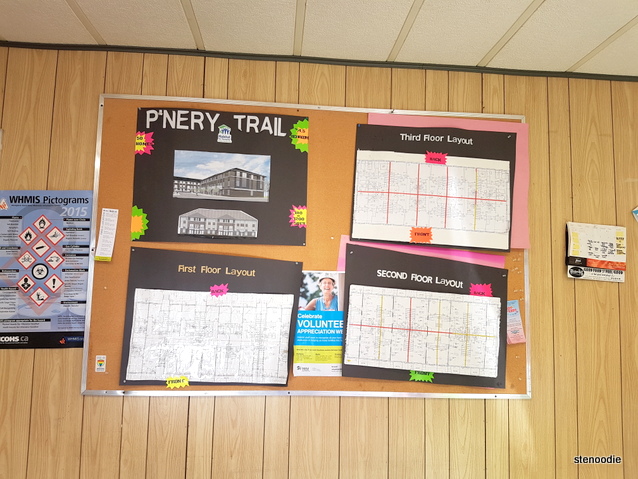 The floor plans for 140 Pinery Trail

Once everyone was suited up, we began the day with a welcome, the rules for working that day, and a cheer.  It was a pre-written cheer to hype up the day and allow everyone to bond together on this task.  Laura did include the “Toronto Trillium Lions Club” in it too though which was fun.  We followed Filip who led us throughout the day to complete the construction.  (We were going to do framing that day.) 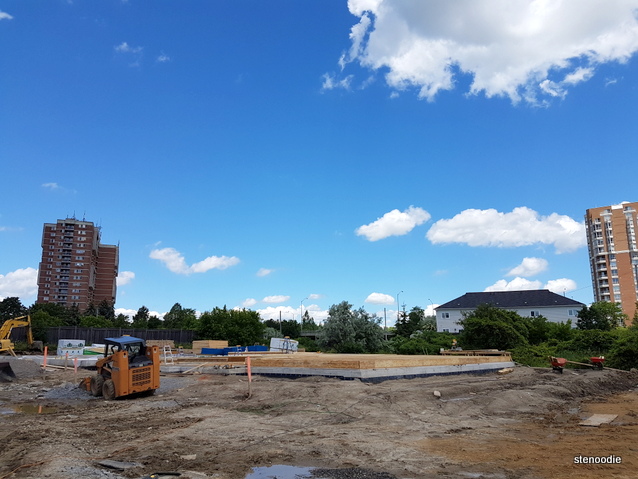 We were at first split up into two groups.  In my group, we were attempting to maneuver wood blocks and pieces from the foundation area before we could start cutting the wood pieces with the power saw.  This took a bit of time to adjust all the wood parts to fit the grooves in the ground to provide a stable and level foundation for the power saw to sit on.  We moved the wood blocks and I also helped move a large piece of wood as the cover for the ground.  It was really heavy!  We had to be careful when walking to avoid having our safety boots stuck in the mud since it had been raining heavily in the previous days and there were huge puddles in the ground.

(Looking at the power saw, I felt very intimidated.  Everyone’s hands and ten fingers are important but especially for my job as a court reporter, my ten fingers are my bread and butter — in fact, I’m writing on my stenograph right now to write this blog post — and thus I really didn’t feel comfortable risking my bread and butter for this volunteering job.  I informed Sana about it and she said she was glad that she told me and that I could measure the pieces and didn’t have to cut.  Phew.) 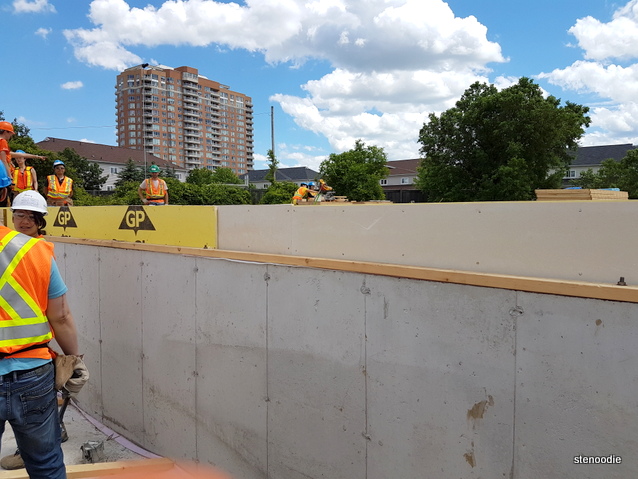 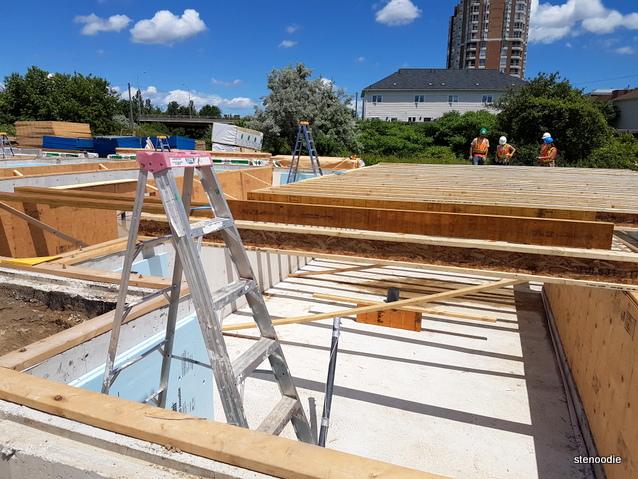 After a while though, I was called to the other group to help out with the hammering of the boards and insulation for the framing.  This allowed me to use my hammering skills; of which there is nil.  XD.  I’ve never done construction work before and hammering walls is quite foreign to me.  Long story short, it takes a lot of strength to hammer the nails into the existing wood frames!  My arm got quite tired after ten hits or so.  It didn’t help that the wood was quite hard to hammer into and the long nails would sometimes get twisted.  In addition, the angle of the spot for the bottom nails was an awkward one.  Later when we hammered in the insulation sheets, the nails went in much easier. 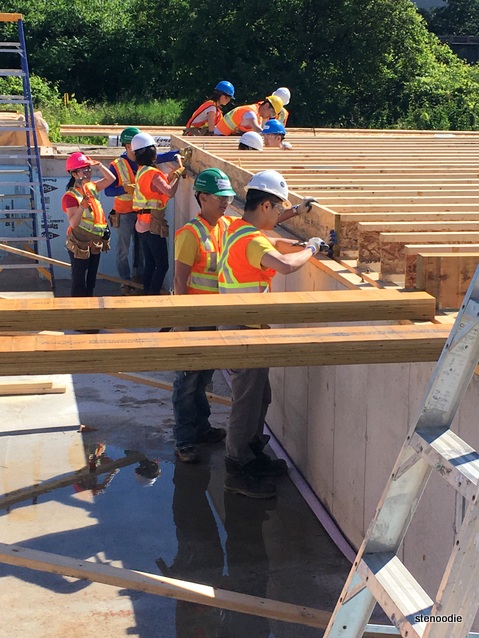 You can see me shielding my eyes in mid-work…

We had a short break at 10 a.m. where we went for snacks in the trailer.  There were lots of cookies and baked goods provided for us! 🙂  I’m glad there was a break because it was getting quite hot outside in the direct sun!  (They also provided sunscreen for us when we were suiting up.)

After the snacks, we continued working on our tasks.  The sun was high up in the sky by this point and while it was certainly a nice day to work outside, it was getting really hot too.  I switched my task by holding the wood beams in place while the other guys nailed the wooden boards in.  This helped a bit with the sun because I was on opposite sides of the structure where the sun was behind me.

When noon came around for lunch time, the pizzas from Pizza Nova had already arrived and set out on the table in the trailer!  This was great timing and planning on Laura’s part.  Yay!  The pizzas were delicious and the selection that they ordered was varied!  (Hawaiian, pepperoni, bruschetta, veggies.)  So delicious! 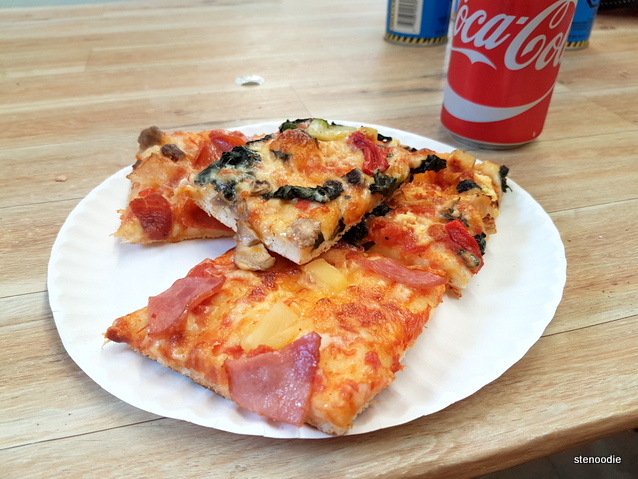 After lunch, we took a nice group photo in front of Phase 1 of the homes.  (We were working on Phase 2.)

(Laura also told us at the onset that this was a very meaningful community too for the fact that the first group of residents who currently live in the homes that Habitat for Humanity have grown-up kids now who also can volunteer to make the second “generation” of houses for Habitat for Humanity.  It was indeed a community project!) 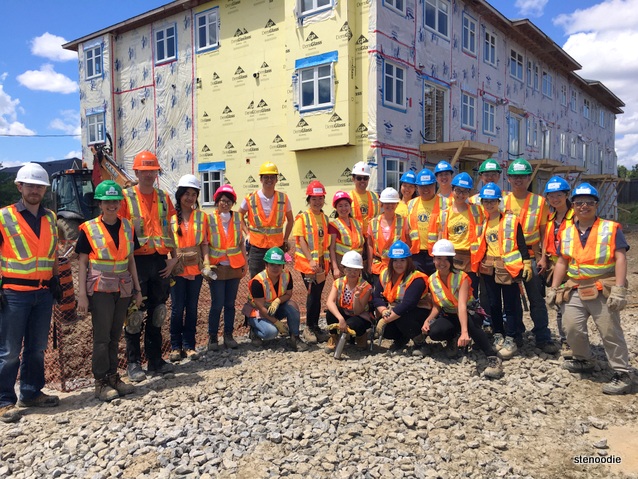 Thank you for the photo, Laura!!

After lunch, the clouds had come out and it was much nicer to work outside since the sun would sometimes hide behind the clouds.  The occasional shade helped a lot with shielding the direct sunlight.  (You can tell that I’m not an outdoors person lol).

We continued more of the same tasks after lunch.  We proceeded to work on the framing and this time since we were done the first part of the hammering, we started to cut out the wooden beams to put into place.  This took some time and lots of measuring.

By 2:30 p.m. or so, we had another break (it reminded me of the recesses and lunch breaks during elementary school :)).  This time, Laura was so kind and brought us ice water, Fudgesicles, and Popsicles too!  It was a well needed break for some sustenance.  Construction is all hard labour! 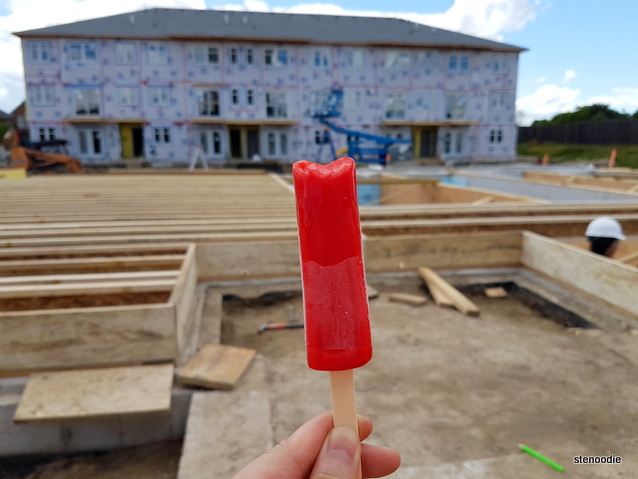 Enjoying my strawberry Popsicle during our second break

After our second break, we continued working for another hour before it was clean-up time.  I was very happy to be done the day and survived. 😀 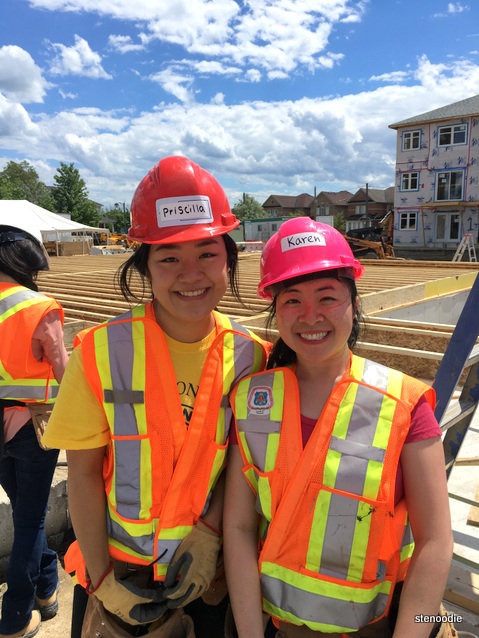 Yay! Our first time volunteering at Habitat for Humanity! Thank you Laura for this photo!

Throughout the day, I actually had to visit the first aid trailer twice because I found out that I had a splinter in my hand.  The first one was in my palm and the second one was in my pinky.  Both times were found in my left hand.  I made the newbie mistake of wearing my gloves the other way around and that’s what caused the first splinter. XD  (I’m not sure how the second splitter happened.)  Luckily, I was able to pull the splinters out using the tweezers from the first aid kit.

By 4 p.m., we were out of the construction gear and back to our original street clothes.  We were all sweaty, hot, and thirsty.  It was a really good day to volunteer with Habitat for Humanity to see what goes into building a house.  (Two of our club members actually helped out with the interior of Phase 1 by cutting out insulation sponges too.)  It was really valuable and an amazing first time experience.  I would say that I’m extremely grateful and appreciative of the work that goes into building a house.  It’s really not easy!  Secondly, I would say that I definitely know that I do not enjoy outdoor work or construction type of hard labour.  I’m not good at hammering nails and I also realized that I really dislike working outdoors.  I’m also not as physically strong as most other people which makes hard labour tasks even more difficult for me to complete.  Direct sunlight is not something I enjoy for long periods of time and having a really bad allergic reaction to pollen this spring didn’t make being in the outdoors any better. 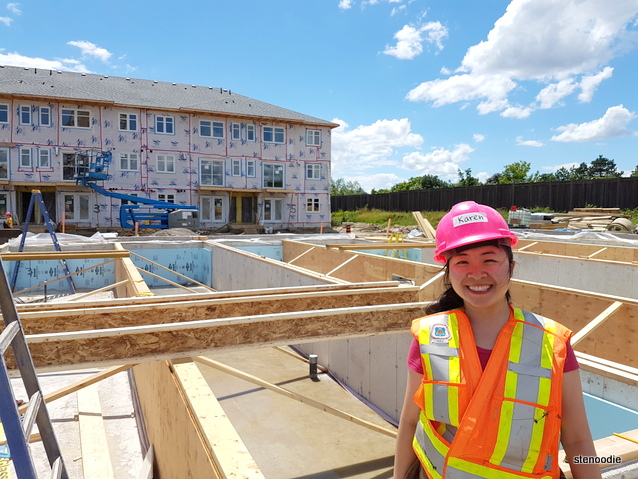 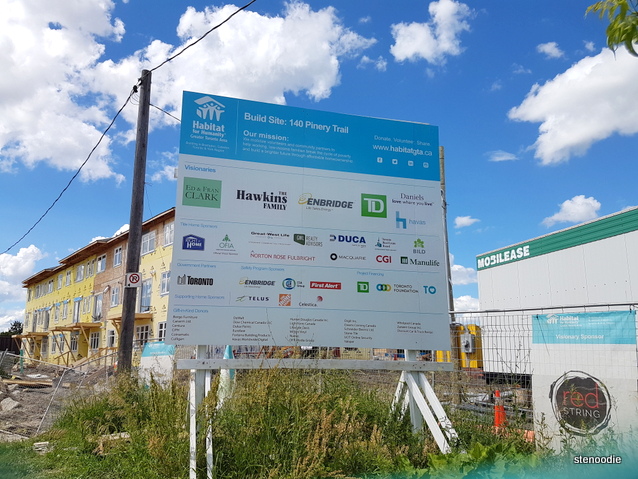 Thank you for this wonderful experience!!

I can’t say that I won’t volunteer with Habitat for Humanity again but I hope that the next time I help out, it will be for an indoor portion of the house (maybe something like painting walls because I’ve never done that before either). 😀

(Laura was the best site coordinator we could have had.  She was so genuine, friendly, and nice.  She made the whole experience that much better.  She lovingly provided us with snacks, water, and support if we needed it.  She also took so many amazing photos for us too!)

And thus, that’s the end of my very long-winded recap of the first time I volunteered with the Habitat for Humanity.  Thanks for reading! 😀

So cool: You can click here to check out their live camera and keep up-to-date with progress at Pinery Trail.  More photos from the day taken by Laura can also be seen here.