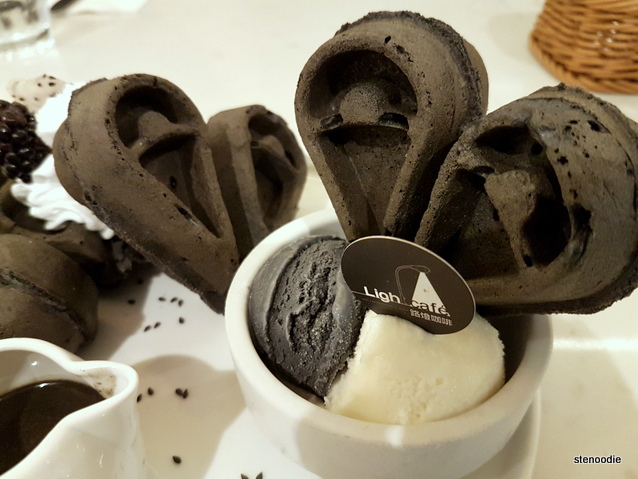 On Friday evening, my girls and I met up for dinner at Light Café.  I had seen photos from Light Café pop up since last summer on social media and since then had always been intrigued to go to try it out.  It’s a Taiwanese-inspired café with savory items like hot sandwiches, mini pizzas, salads, soup, and baked potatoes as well as lots of desserts.  In fact, their desserts are the main draw of this restaurant I would say.  They hail from Taiwan with three locations and their Toronto location is their first one outside of Asia. 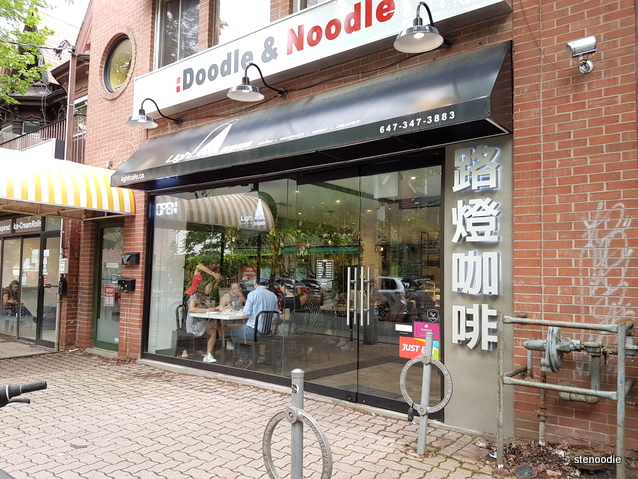 I had heard that reservations were recommended here so I made a booking for us four for 6 p.m.  When we walked in that night, there were indeed a lot of people there already and I’m glad that we had a table available for us right away.

Seating and ambience inside

It was really cute inside with a wall full of greenery and lights that were encased in a currently trending “grid”-type lights. 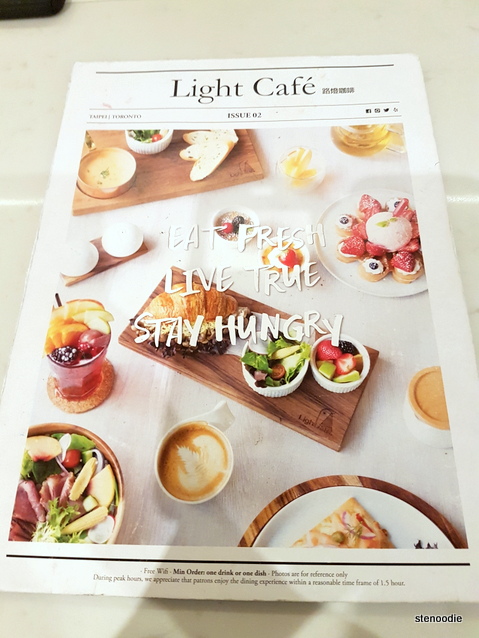 We looked through the menu and my friend noted that their mains weren’t particularly worth it or on the higher end of the price value depending on the type of things that were being served.  As well, we noticed from the entrance that they stated “cash only” which I had forgot to inform my friends about when I made the reservation.  Thus, half of us weren’t going to order much and then decided to order just dessert instead.  (They have an ATM on site but which service charge is $3.  That’s the price of a TTC ticket, a.k.a not worth it to get cash from there.)

(Their menu reminded me of the Cha Me. Cha menu design.)

Anyway, we all decided to just order desserts here since their desserts were outstanding and have dinner elsewhere.  (Nothing wrong with eating desserts before dinner. :))

After we placed our orders, the items came out in a staggered fashion.  For example, my dessert came out first, followed by one quickly.  However, the next two desserts took a while even though another friend had ordered the same thing as me.  Daphne was the most disappointed because hers was last to arrive and by then, we could have been halfway done our desserts already.  Perhaps they can work on timing to bring out all the desserts out at the same time knowing that we were ordering separately and not sharing desserts? 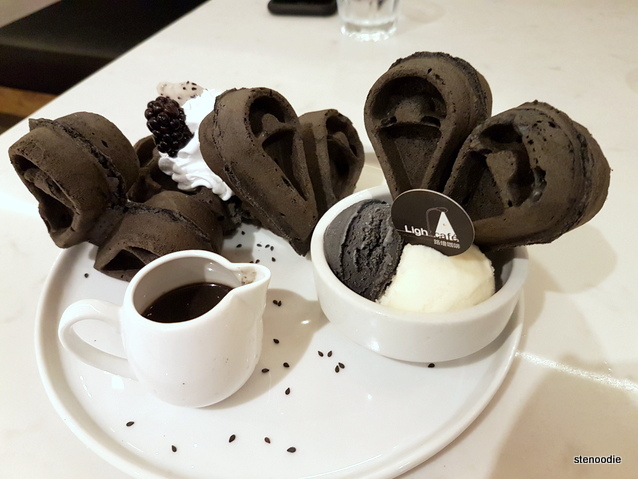 Anyway, I ordered the Charcoal Black Sesame Waffle.  This was a definitely “feature” of their restaurant after having seen this dish all over Instagram.  It came with a scoop of black sesame and vanilla ice cream in a small dish.  The highlight of this dish is that all of the waffles are shaped like hearts.  There was also a mini pitcher of black sesame sauce to drizzle over the waffles.  There was a piece of dragon fruit and one blackberry on some whipped cream too.

I really enjoyed the black sesame ice cream!  It was really flavourful.  However, for Lina’s portion, it had started to melt really quickly, which was a disappointing part because Lina detests melted ice cream. 😦

I thought that the waffles were pretty good; they were not too mushy or hard and were easy to eat through with the ice cream and black sesame sauce.  It was a lot for one person though and I even gave one waffle heart to Clarissa.

I tried the Strawberry Mille-Feuille that Clarissa got and it was quite good!  It looked like a pastry tube with cream and strawberries on top, a scoop of strawberry ice cream, and a pipette of strawberry sauce.  The pastry was really flaky and good! 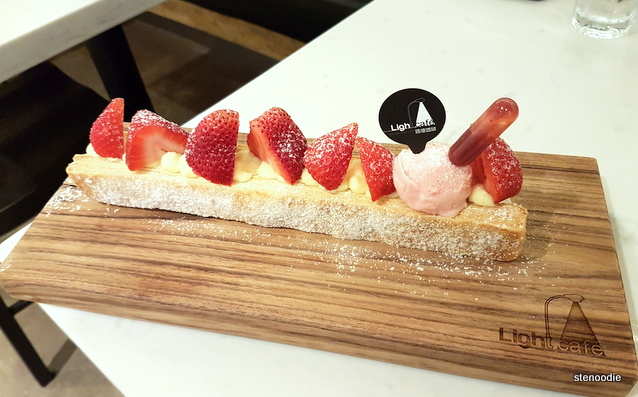 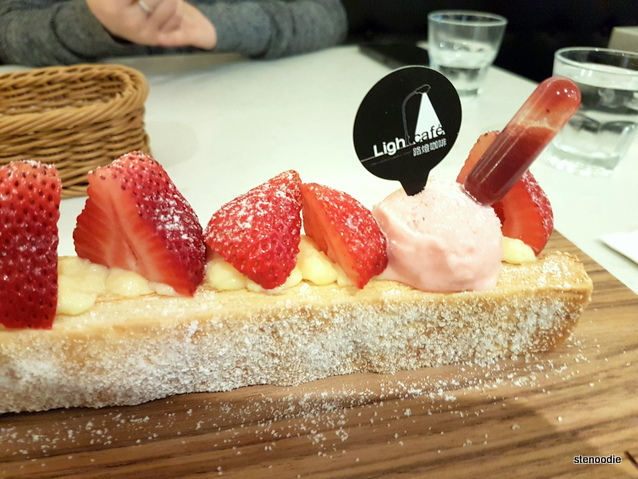 Close-up of the Strawberry Mille-Feuille

Daphne got the Choco-Banana Mille-Feuille.  This was also a pastry tube with chocolate sauce, bananas, chocolate, and a pipette with chocolate sauce instead to drizzle on top of the dessert.  It was very rich and Daphne was super full from it at the end that we actually didn’t need to get dinner elsewhere either. 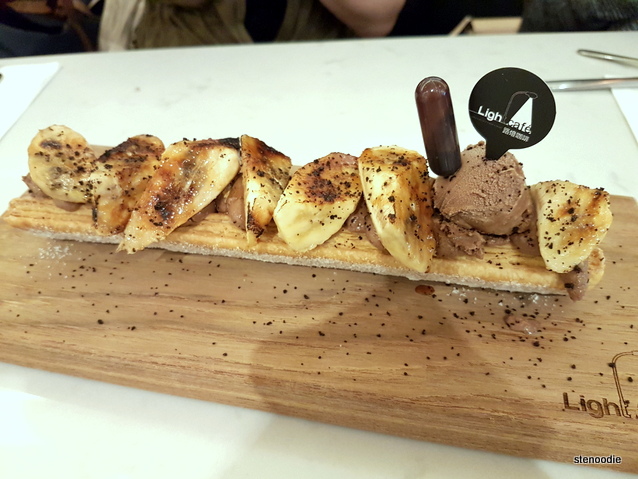 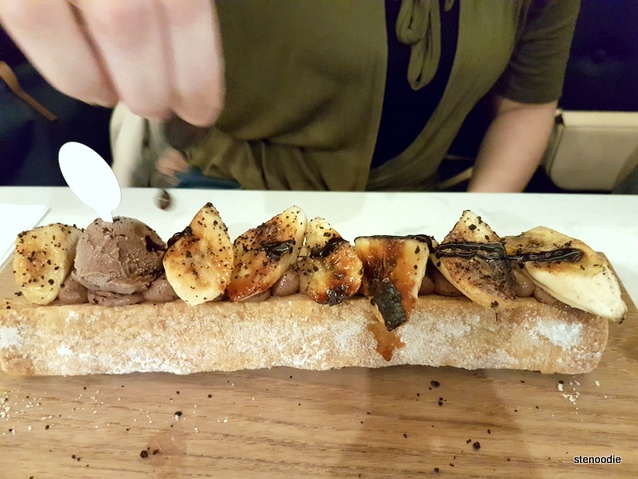 Squeezing the chocolate sauce onto the Mille-Feuille

Overall, I’m really glad that I got to try Light Café finally.  All things considered, I thought that it was a really cute café, definitely fit for instagramming due to its aesthetically pleasing creations and modern stylish environment.  However, while my dessert was good overall, I did think that Light Café is a bit of a gimmicky restaurant.  Their draws are their desserts and possibly some of their savory items.  I can also see this restaurant in a place like Hong Kong where plenty of cafés are styled the same way.

I’m not too sure what to add to my first impression of Light Café..  Maybe I’ll find myself here again to make a better judgment.

(Also, I think that if Light Café wants more business, perhaps they should provide credit and debit payment options too.  In this age of convenient cashless and electronic currency, who carries that much cash in their pockets?  If a customer is ill-prepared for the ‘cash only’ option, they will find themselves ordering less from the menu than they would have been if there had been alternative payment options [exactly what my friends did on this visit — they ordered based on what cash they had in their wallets].  Furthermore, a $3 transaction fee for the ATM is much costlier than other on-site ATMs…)