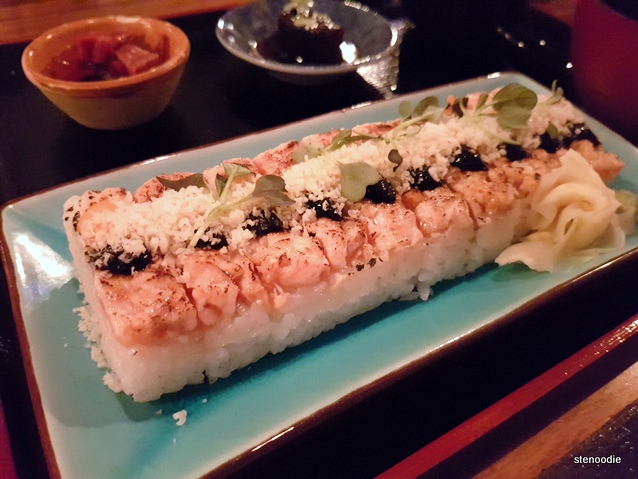 After our long and arduous trip back from New York, we headed back uptown to Yonge and Finch area and decided to eat at Hashi Izakaya.  I had won an online contest back in February where my prize was a $25 gift card to Hashi Izakaya.  (The contest held by @frances.menu had three prizes: one $100 gift card, one $50 gift card, and one $25 gift card — I won the last one.)  After I had been picked as one of the three winners, I sent a private message to Hashi Izakaya to confirm my prize and inquire about the details for the prize redemption.  They got back to me promptly and informed me that I could go to the restaurant at any time to claim it and that I just needed to provide my Instagram ID for identification. 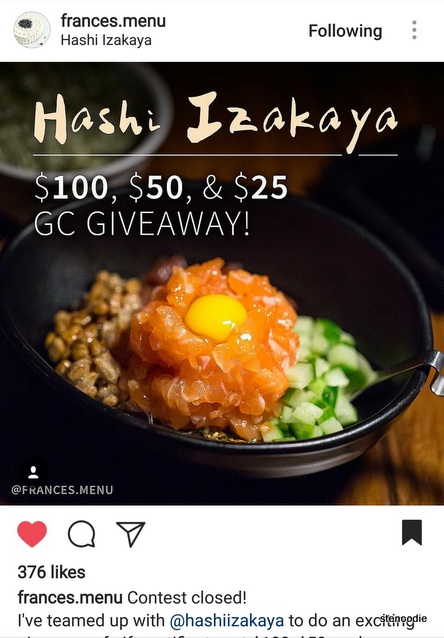 Screenshot of the contest on Instagram held in February 2017

Thus, it worked out that Ken and I were able to have dinner here since we were already in the area. 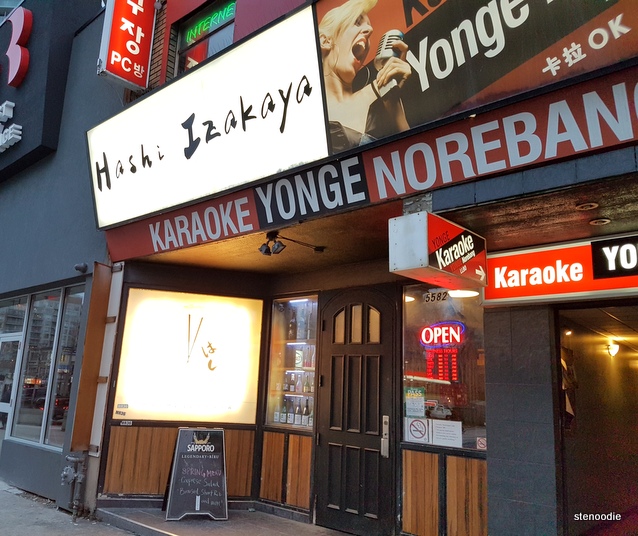 I was so excited to be finally able to try this place!

Hashi Izakaya is a Japanese izakaya that serves drinks and small tapas dishes for sharing.  When we walked in, I was surprised with how dimly lit it was.  It was appropriate for an izakaya though because I know some of them have low light to fit with its mood and ambiance. 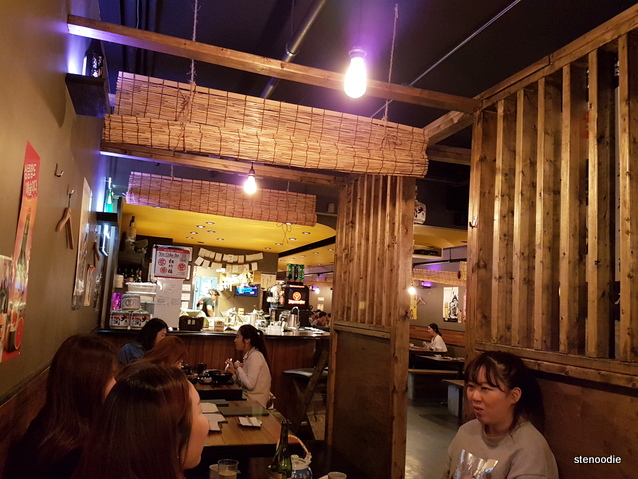 We were greeted after a little bit of time since the staff seemed to be busy with other customers.  Once we were acknowledged, we sat at one of the open booths near the front of the restaurant.

Before we placed our orders, I informed the server about the contest prize and opened up my private message about the prize thread to show him.  He seemed a little perplexed about it and asked if he could take my phone and the message to show it to his superiors.  I was fine with that; I trusted the staff to take care of my phone in that short period of time (or at least I hoped so XD). 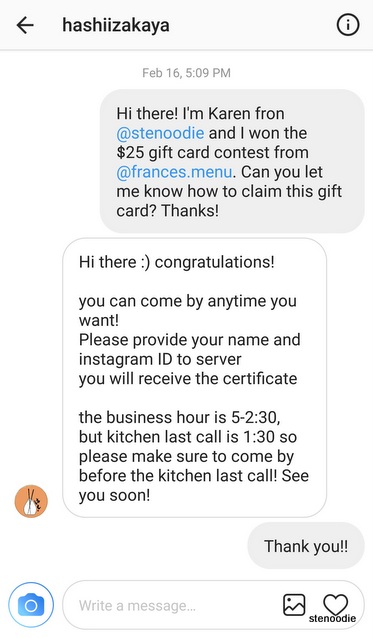 He came back and told me that the prize and offer wasn’t valid anymore because their promotion period was over.  Ugh, when I heard this, I was already annoyed.  It is one of my pet peeves to go to a restaurant after having won their contest prize and get denied on the spot.  Like I have mentioned in another one of my contest redemption posts at a restaurant, it’s not like it is my intention to bring inconvenience to the restaurant but that if the restaurant has agreed for an influencer to host a contest for them, they absolutely need to acknowledge it when the prize winner goes to the restaurant to claim the prize.  Otherwise, it’s not only inconvenient and embarrassing for the prize claimer but it looks bad on the management as well.

Anyway, I stood my ground because it was absolutely clear in the message that Hashi Izakaya stated that “I could come at any time to claim the prize” so how is it that I wasn’t able to claim it?  I told him there were three prizes and that I was one of the three — I was the only one who won the $25 gift card.

He went away to speak to a female staff.  She came back with my phone and finally acknowledged my $25 gift card and was able to take our order at that time too.  Phew.  But anyway, the fact that I had to write about this shows that it wasn’t a smooth process in any case.

We actually weren’t too hungry so we used up the gift card and ordered three items to share.  We ordered the Spicy Sashimi Salad, Salmon Natto, and Salmon Hako Sushi from the Teishoku Set.  Their menu actually had a lot of variety of unique izakaya items and torched sushi too.  However, we weren’t really in the mood to splurge since we were tired from a long bus ride and simply wanted to eat.

The first to arrive was the Spicy Sashimi Salad.  This had diced sashimi and greens with a sweet-chili dressing.  While I found the greens to be very fresh in this salad, I didn’t think that it was overall that spectacular.  But then again, it’s really just sashimi salad so unless there was something really extra about it, it was mediocre. 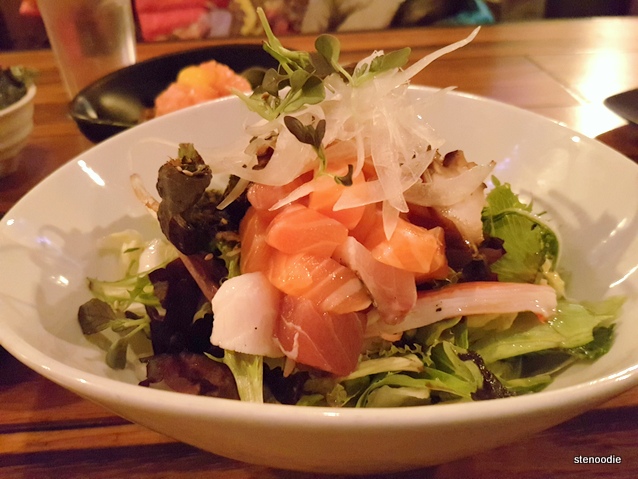 The Salmon Natto arrived with seaweed on the side.  It came with diced cucumber and a quail egg yolk.  I have eaten this before most recently at that time at the uptown location of Kinton Ramen.  This Salmon Natto was a smaller in size in comparison to that one but was more flavourful (not as bland).  I remember that there was nothing too special about it either. 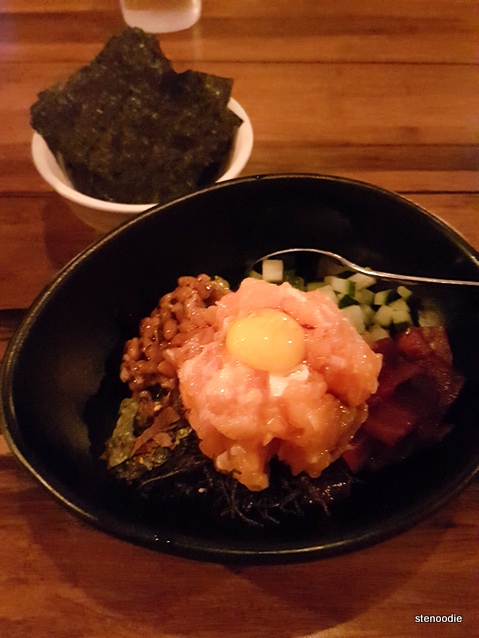 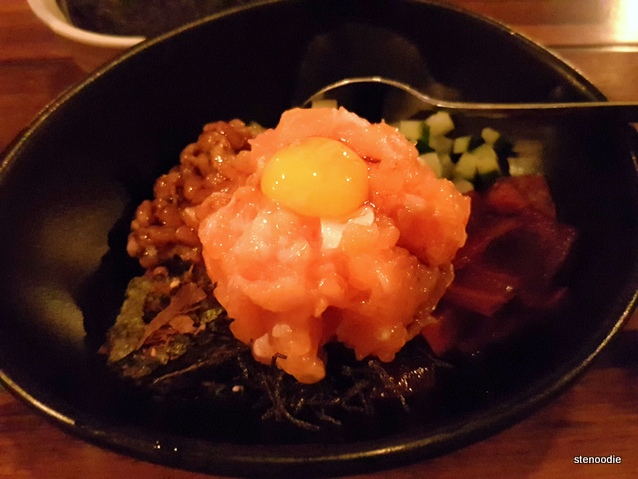 So pretty, that yolk 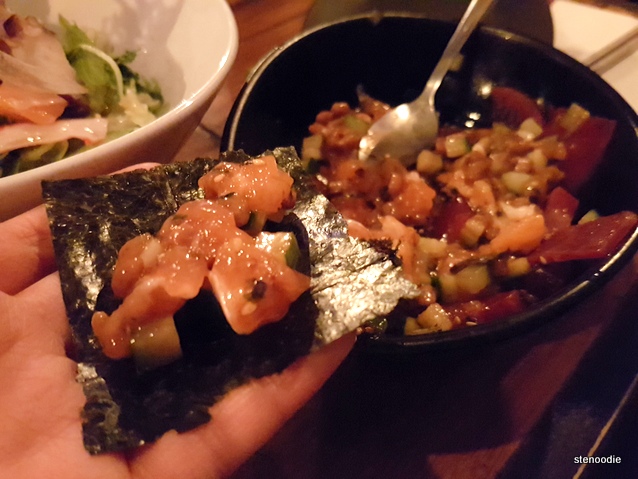 To eat it, you mix it up and serve it on a piece of seaweed 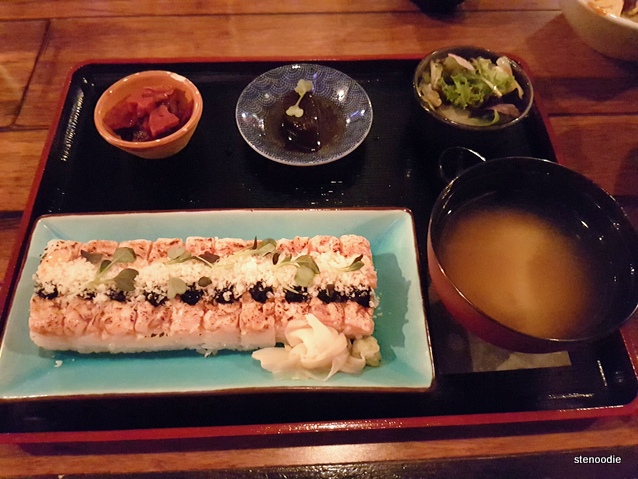 The Salmon Hako Sushi from the Teishoku Meal Set was a torched salmon box-sushi.  The set arrived on a tray with miso soup, salad, rice, and two side dishes.

I was really impressed with this Salmon Hako Sushi!  It was pressed sushi which meant it was “box-shaped” and was really delicious!  There was something about it that was so tasty, soft, and done really well.  This was the best dish of the night.

After about an hour of eating, we were satisfied with the food and happy to head home.

Although I didn’t initially have a good start to the meal, I think that Hashi Izakaya has some really good menu items.  After going there, I realized that I should have tried their “Creamy Pork Belly” dish as I heard that one was really good.  I don’t think I’ll return any time soon though because I thought their prices were a little high and there are just so many restaurants in the neighbourhood of Yonge and Finch that I would want to try something else next time.  Thank you again to Frances for hosting the contest and to Hashi Izakaya for honouring the contest prize!

FTC Disclaimer:  Although Hashi Izakaya provided the meal partially free of charge via winning an online contest, the opinions expressed here represent my own and not those of the restaurant or contest host.

5 Responses to Dinner at Hashi Izakaya