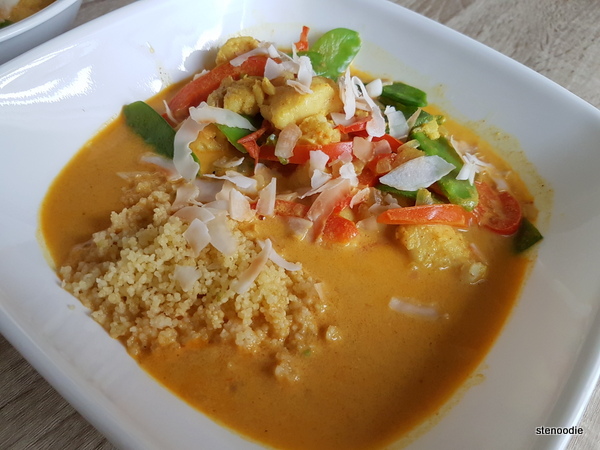 November 15, 2017:  This was the first meal of this type from Chefs Plate that I made!  It was a Thai Fish Curry in a Coconut Broth with Snow Peas and Lime Couscous.  This was different since it was a broth and it was curry!  I hadn’t made either one of these from any of the Chefs Plate recipes before. 😀

It had difficulty level of “easy” and a prep time of 30 minutes.

I’m glad that something of this caliber had an easy recipe to follow and make. 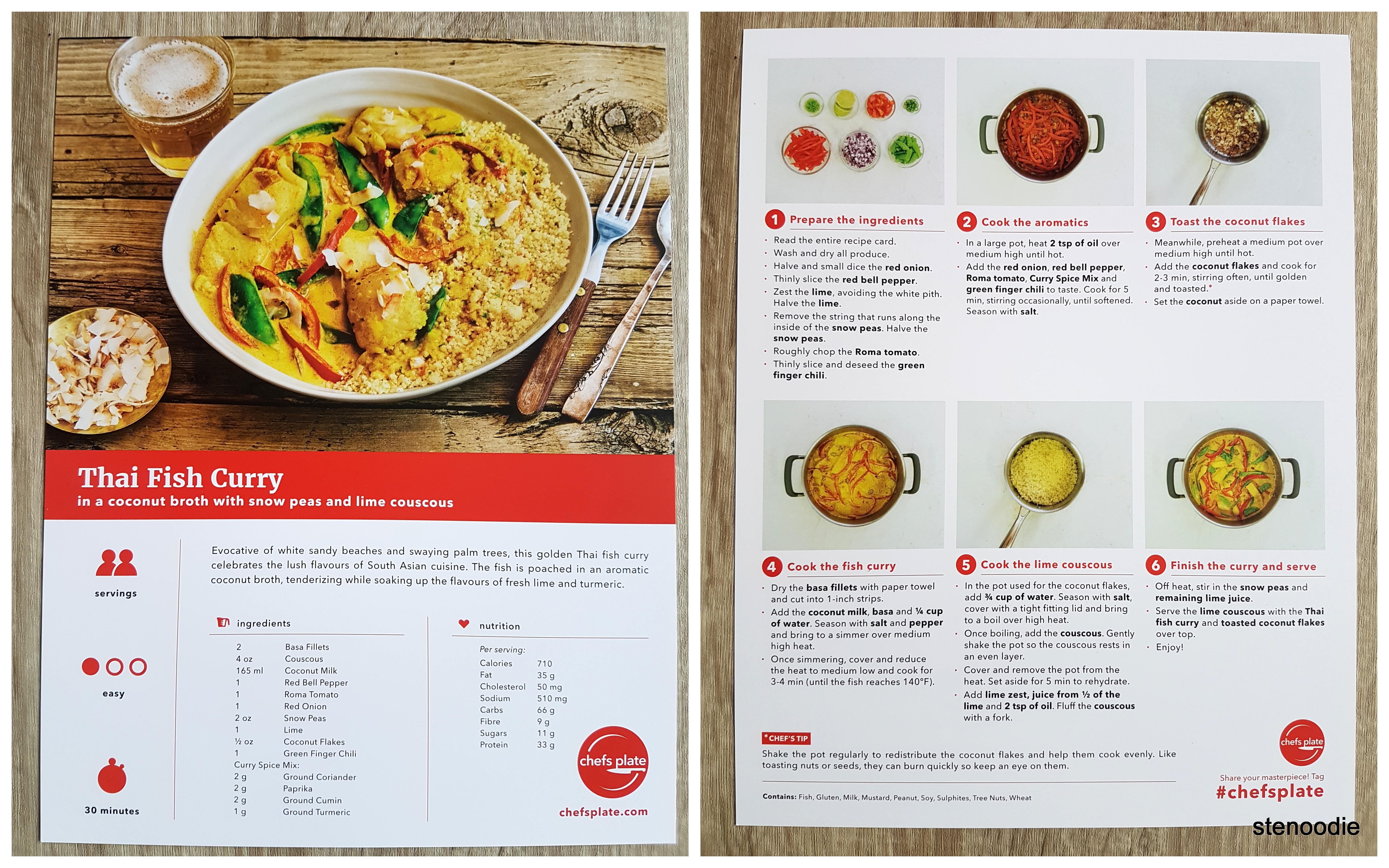 As usual, all of the ingredients in the Chefs Plate packages are locally sourced and delivered fresh. 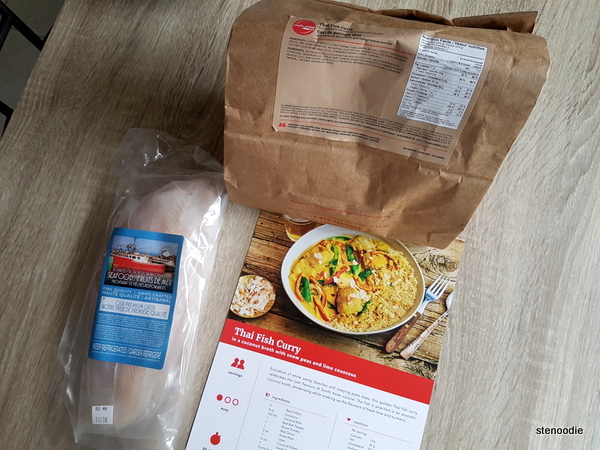 Package for the Thai Fish Curry 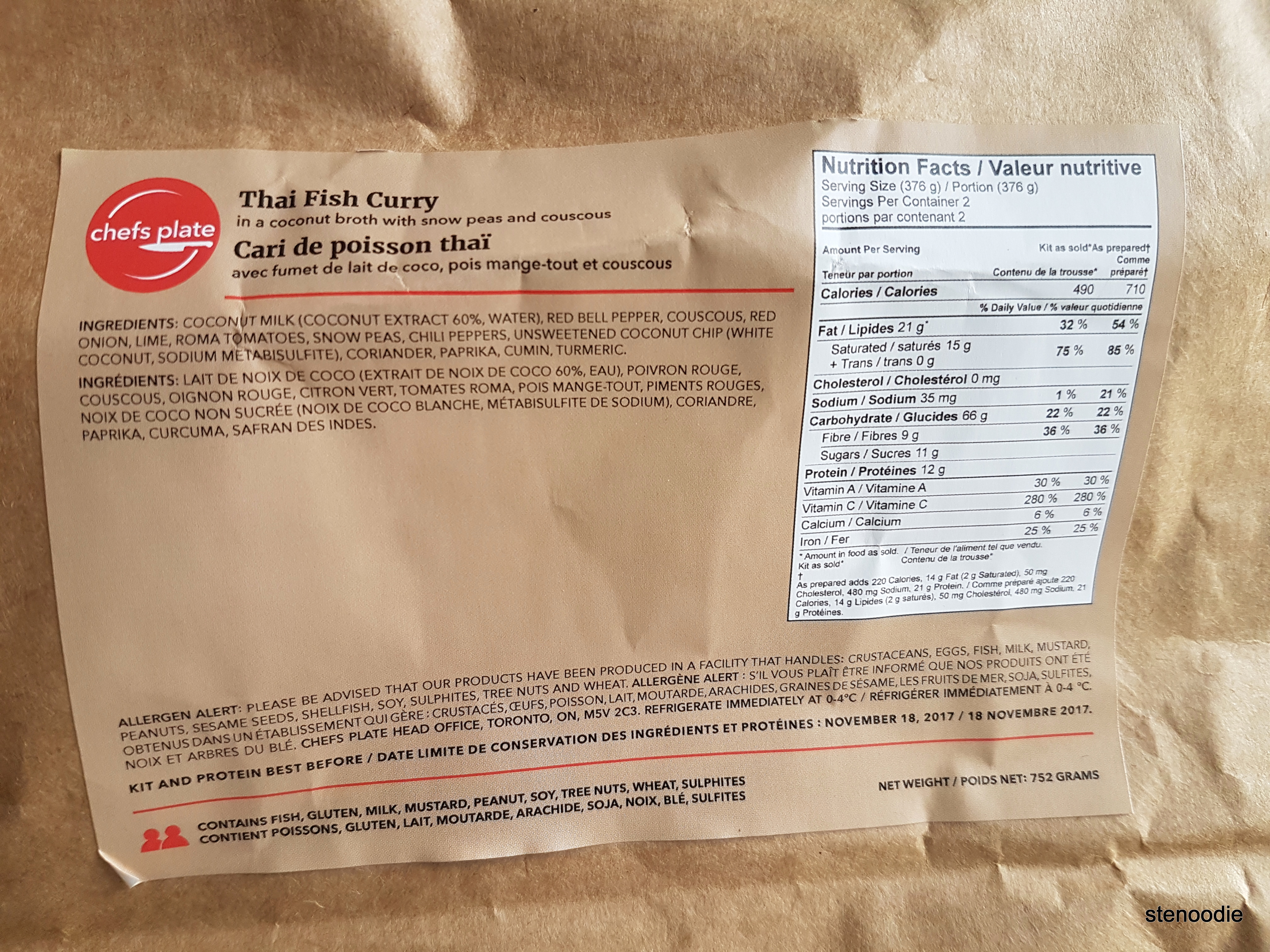 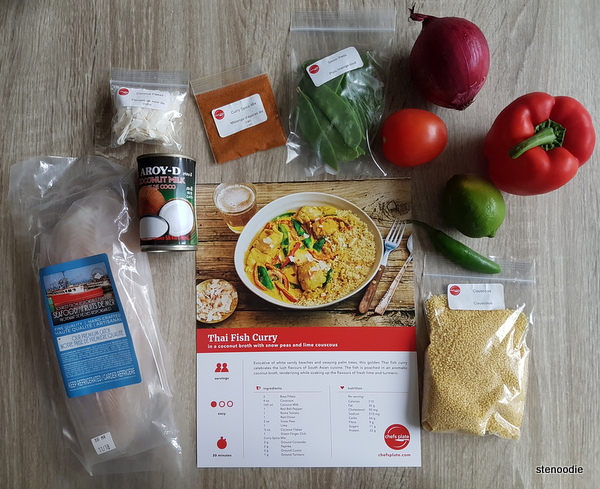 So many fresh ingredients!

First, prepare the ingredients by slicing and dicing the produce as specified in the recipe card. 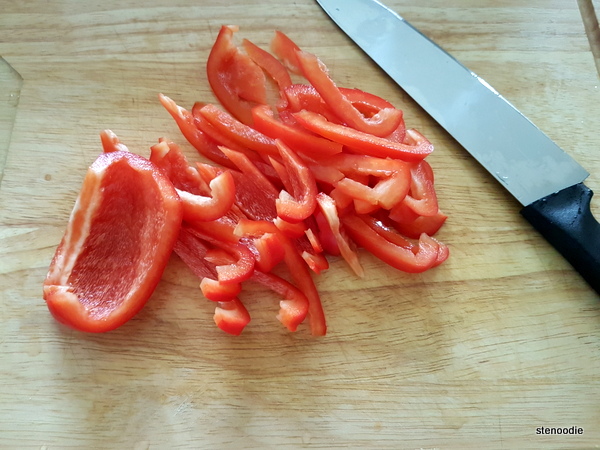 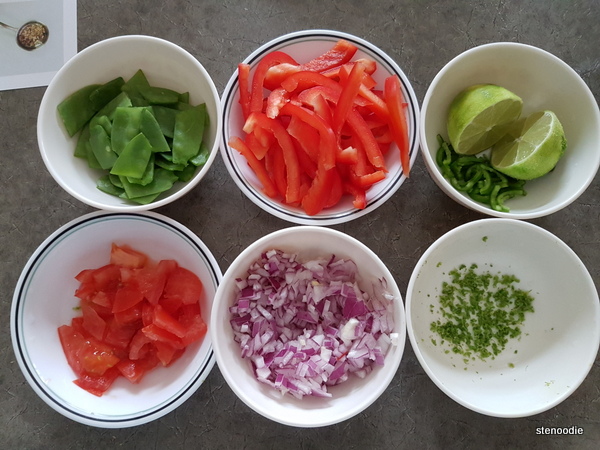 All the ingredients prepared! 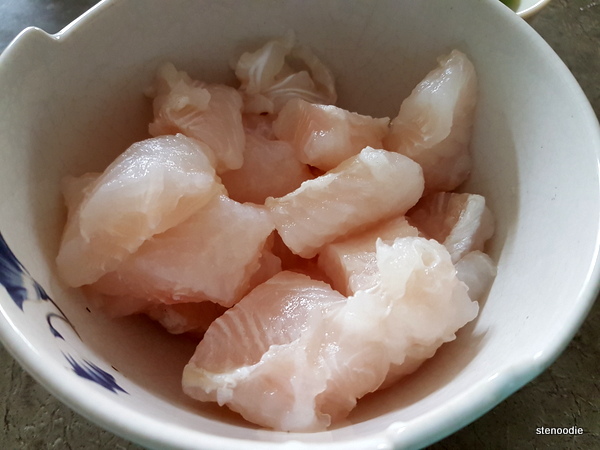 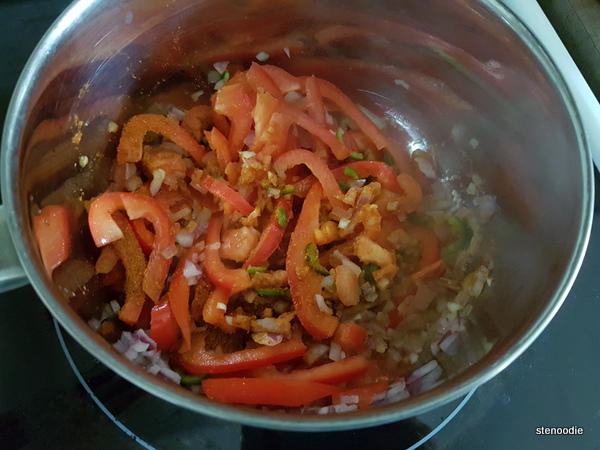 In another pot (we actually used a medium-sized pan which worked just fine), toast the coconut flakes.  This was my first time cooking with coconut flakes.  These smelled so good as they were being toasted but I took them off of the pan early because I didn’t want them too toasted/too dark in colour.  These were left on a paper towel to set. 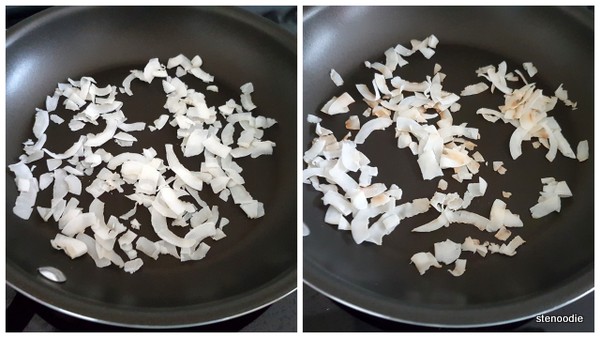 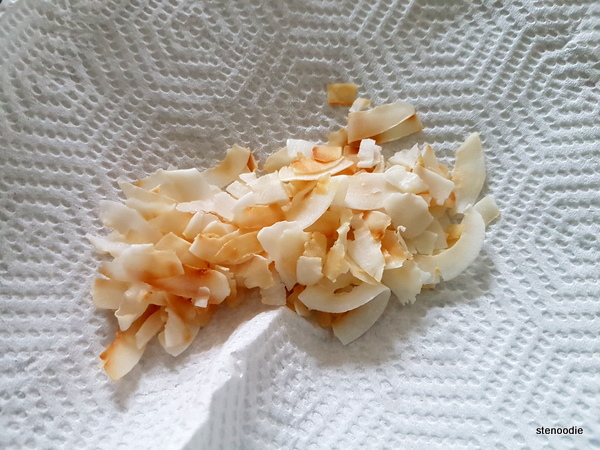 Such a pretty light brown colour

The next step was to cook the fish curry.  The basa fish fillets were added into the pot along with the coconut milk, a quarter cup of water, and seasoned with salt and pepper.  I might have added a tad more water than required so it did take a while for the pot to boil and simmer. 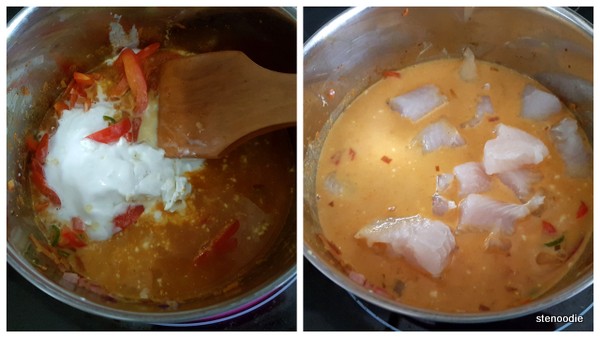 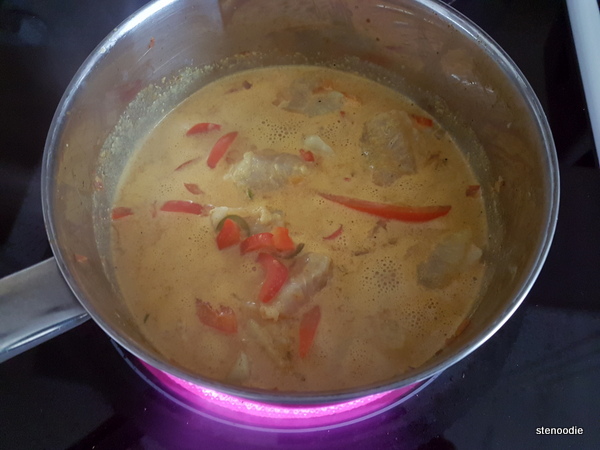 Waiting for it to boil 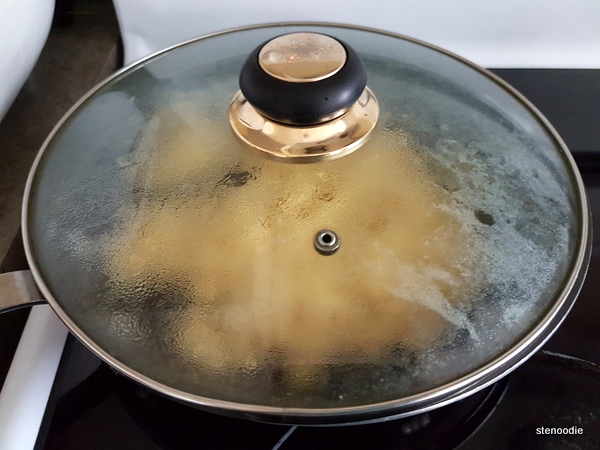 Cover on top of the couscous

Then in the same pot (or pan) used for the coconut flakes, cook the lime couscous.  I’m pretty sure this wasn’t my first time making couscous as I remember eating it in another meal before.  I was reminded of how easy it was to cook couscous — and fast too!  All you have to do is boil a bit of water, season it with salt (if you want) and then throw in the couscous once the water boils.  Make sure the little grains are evenly distributed in the pot, slap on the pot cover and then let simmer for five minutes to rehydrate it.  After this, add in the lime zest, juice from half of the lime, and 2 teaspoons of oil (we used olive oil).  Fluff it with a fork and it’s done! 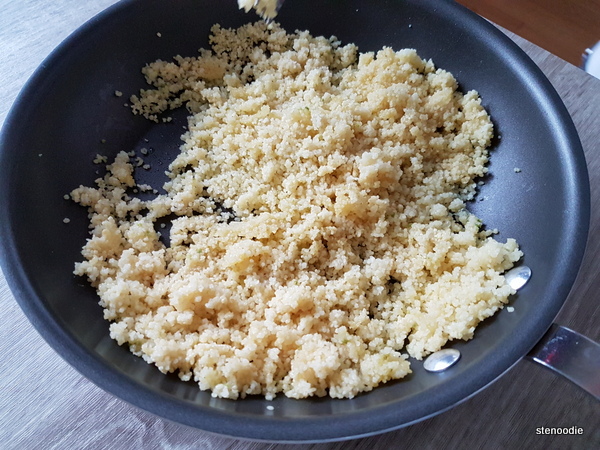 Done! This was so easy to make

After removing the curry from the stove, add the snow peas and remaining lime juice too. 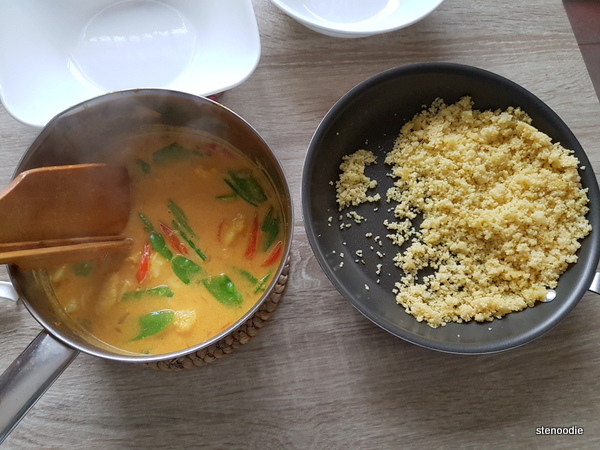 Both ready to be served! 😀

We brought out our large white bowls (which we almost never use except for these photographed meals) and served the curry and couscous together in the bowl. 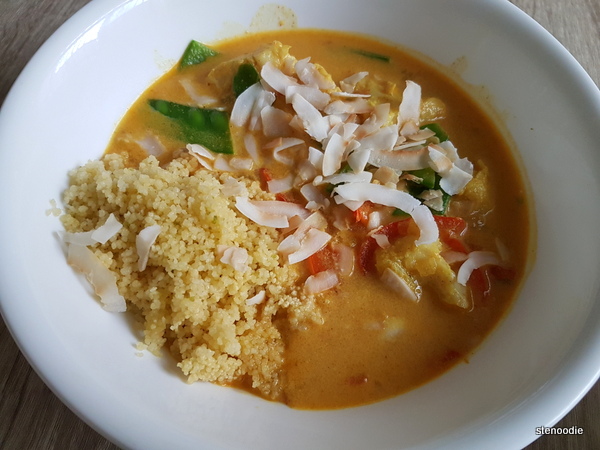 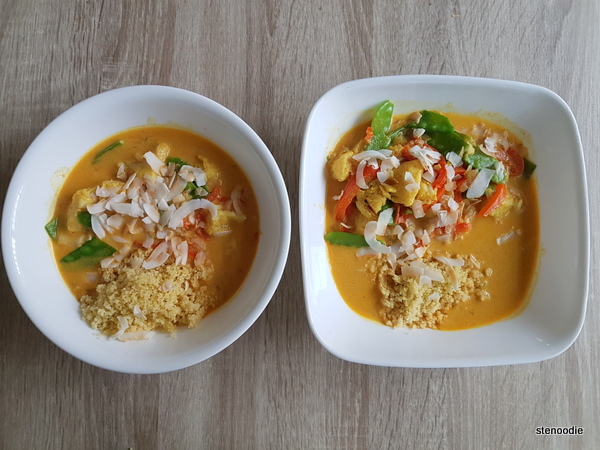 Mmm, I have to say that this was a really delightful and tasty meal!  The curry wasn’t spicy at all.  It smelled strongly of coconut milk and was very smooth.  Even the green finger chilis that were added to it didn’t provide any extra heat either.  What I liked was the combination of the coconut broth with the curry and the lime couscous.  You really tasted the lime in the couscous — what a genius way to pair the broth.  The acidity of the lime plus the milkiness of the broth went together so well!  The basa fillets were good and soft.  The snow peas were so crunchy!  It made a lot of sense to only add them in towards the end when the pot is removed from the heat.  The toasted coconut flakes were also a good addition to the bowl; it was crunchy when eaten by itself and chewy when submerged into the broth.

If you want to try Chefs Plate for free, click this link and four plates of food will automatically be added to your online cart!  All you have to do is choose the four plates; their roster of plates changes every week! 😀

(If the link doesn’t work — and I don’t see why it shouldn’t — you can always input the promo code, #freeplatesfromstenoodie, to receive the free plates too!) 🙂