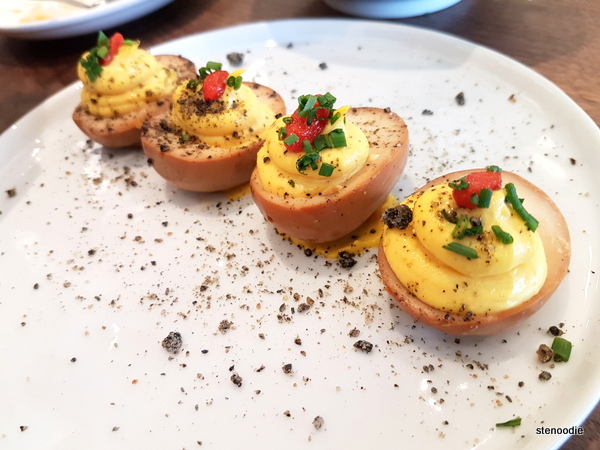 May 19, 2018:  As the trend of Japanese fluffy pancakes hits the Toronto area this year, I saw that Cafe Bon Bon was another restaurant that served the fluffy soufflé pancakes and so I wanted to try them out for myself too.  (The only other cafe that I’ve had these fluffy pancakes from thus far is Hanabusa Cafe.)

Thus, my boo and I walked into Cafe Bon Bon, a newly opened Asian fusion restaurant cafe in the plaza of Times Square at Highway 7 and Leslie in Richmond Hill, on a Saturday in the afternoon around 4:40 p.m.  It was a really modern and cute cafe.  It seemed like a place to go with your a few friends for high tea or snacks.  There weren’t a lot of tables actually.

Panoramic view of the restaurant from where we sat

After we were seated, we received water from the server.  Our water glasses were these very minuscule water glasses that I’m sure if you were very thirsty, even two or three glasses weren’t going to be enough.  They were cute though. 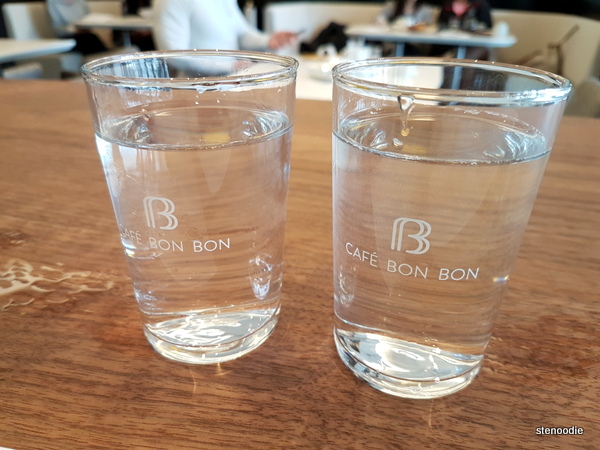 We ordered the Deviled Tea Eggs and 48H Short Rib Donburi.  The prices weren’t cheap here.  In fact, they were quite steep for the items that were being offered.  I’m guessing it’s to cover the cost of the high rent at Times Square?  Anyway, it’s because of the steeper prices that we didn’t order much more than a snack and a bowl especially since we were going to try the pancakes at the end. 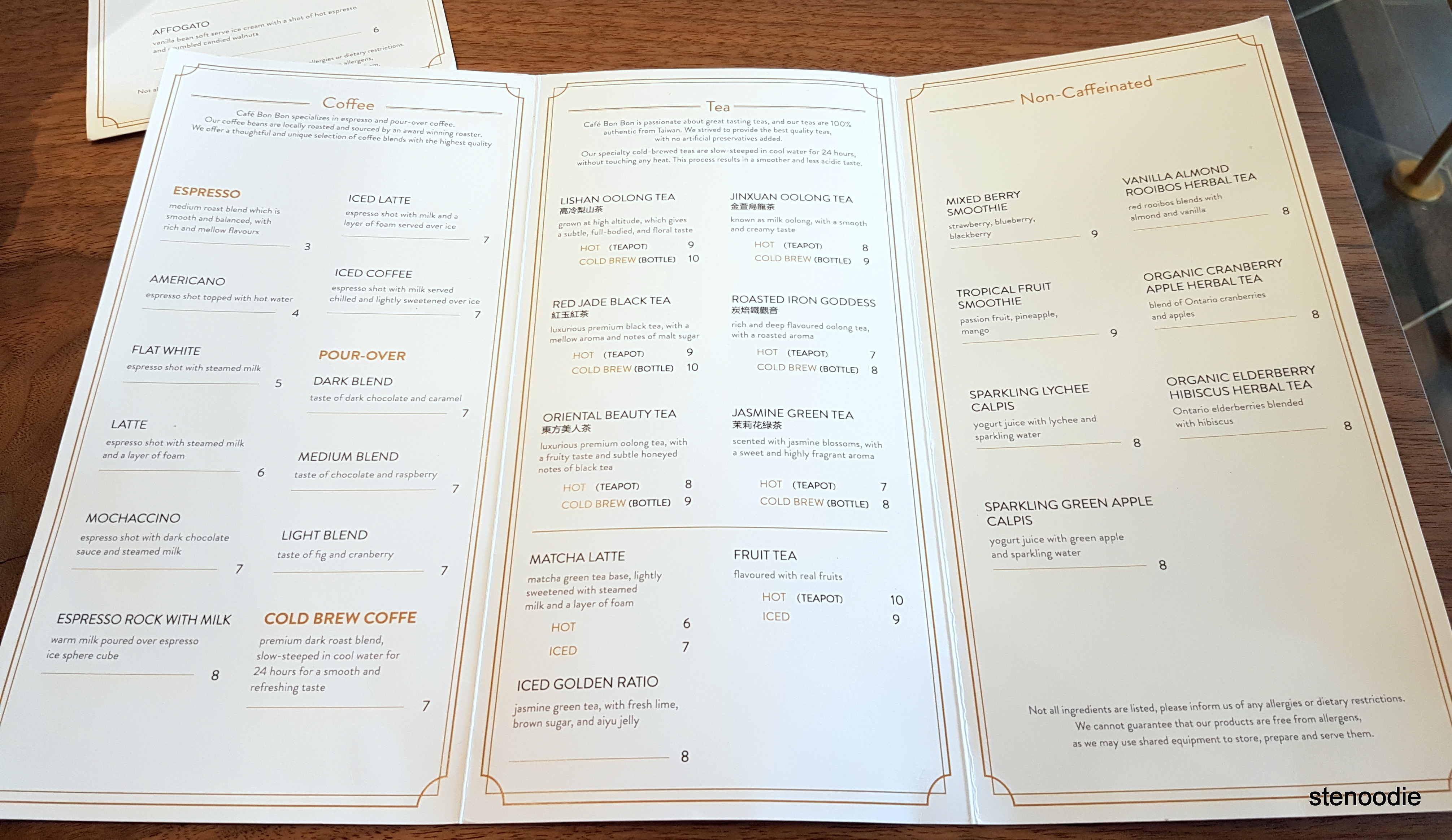 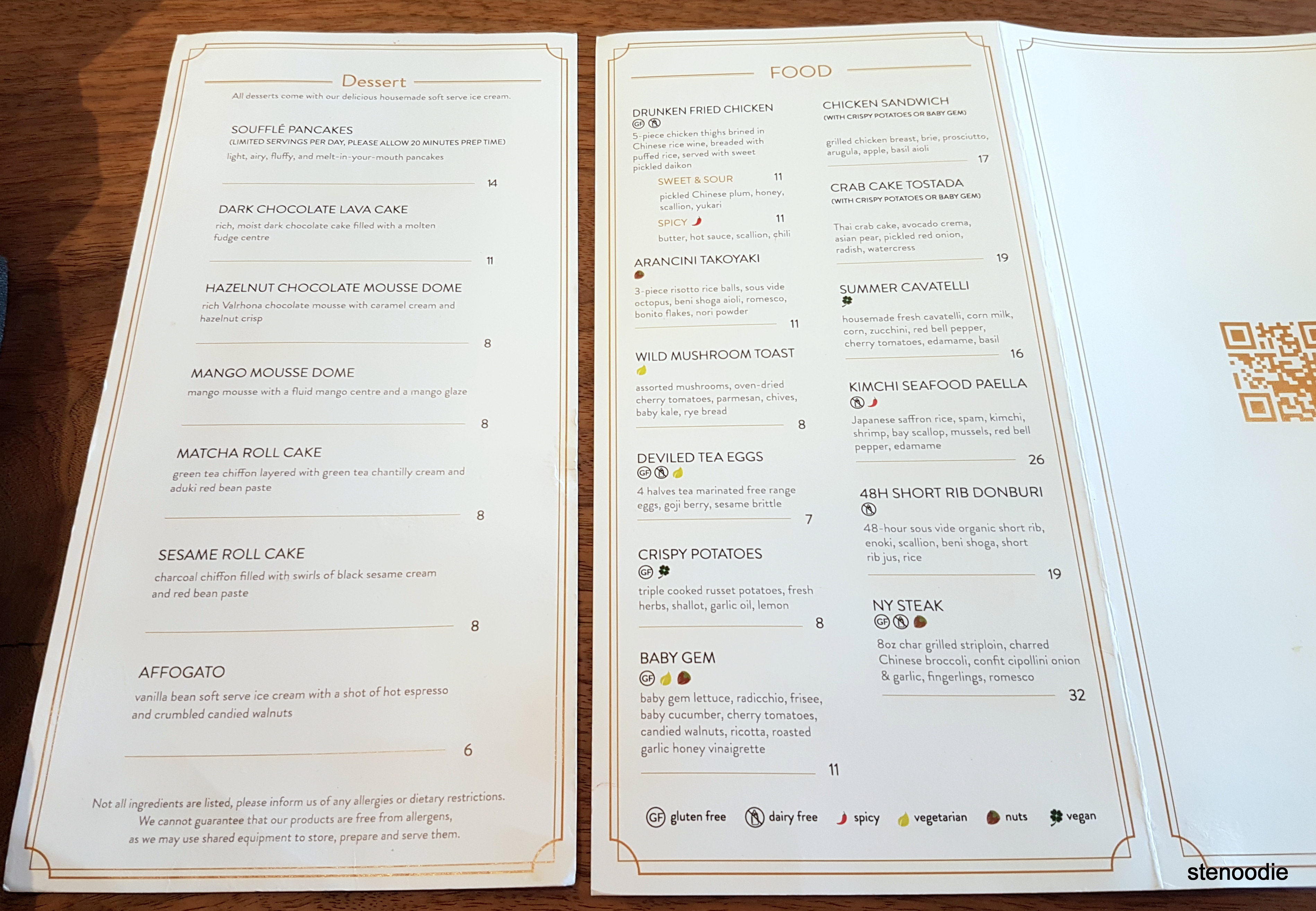 (I had actually wanted to try their Kimchi Seafood Paella but for $26, that was way too unreasonable.  I had also looked around the restaurant and saw the paella dish from someone else’s table — the portion wasn’t very big so in my opinion, it definitely wasn’t worth trying for that price even though I had heard good things about it.)

Ken ordered an Americano.  It was cute that the glass of milk was made to be slanted. 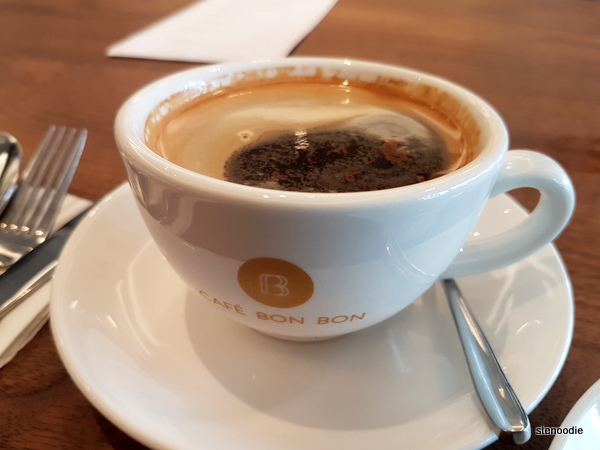 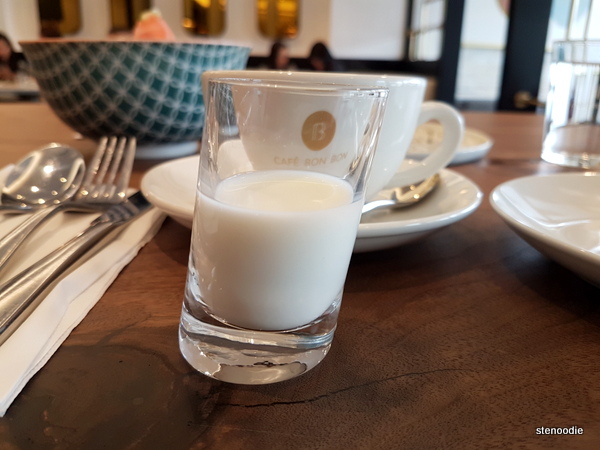 Cute slanted glass for the milk 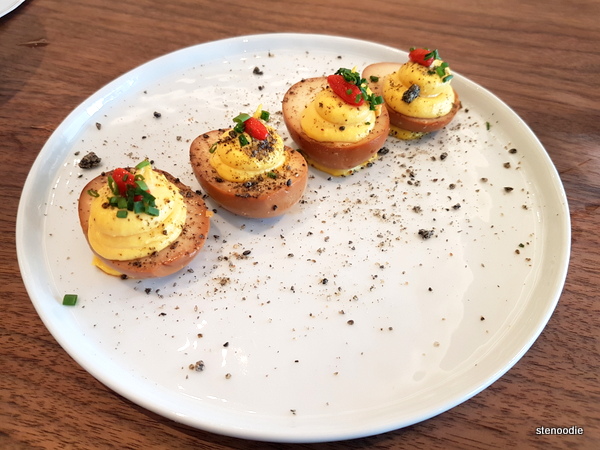 The taste of the Deviled Tea Eggs were quite good too and it was so unique to have the contrasting semi-sweet sesame brittle on top of it.  The taste of the tea marination in the eggs was apparent. 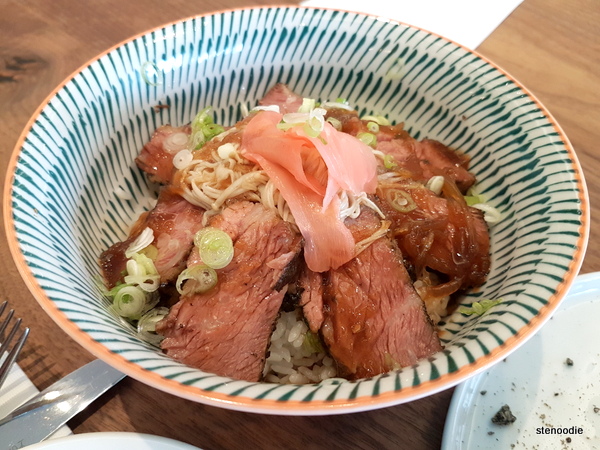 The 48H Short Rib Donburi was a 48-hour sous vide organic short rib with enoki, scallion, beni shoga (Japanese pickle), and short rib jus over a bowl of rice.  The portion wasn’t very big but I guess it’s enough for one person to enjoy.  I loved the super tender and well-seasoned short ribs here!  It was tremendously delicious and I was so surprised!  Even the rice was tasty too because it had soaked up the short rib jus.

The server came over a few times during the course of our stay to refill our water glasses.  Also, upon seeing that we weren’t done our main dishes yet, they inquired if we wanted the pancakes after we were done our savory dishes first which was much appreciated. 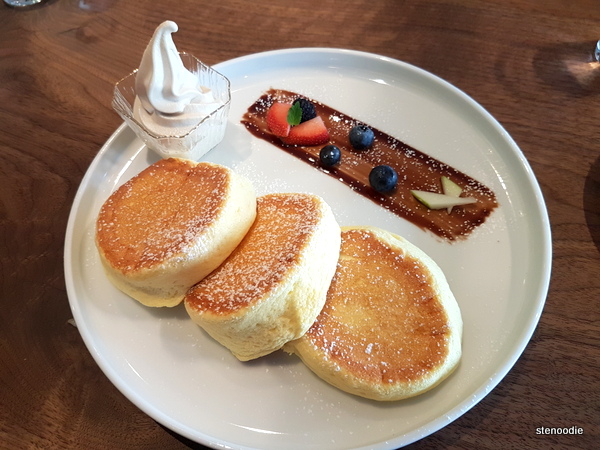 When I ordered the Soufflé Pancakes, I asked if they had any flavours for it but they only had one flavour.  (I was reminded of the ones at Hanabusa where they had many different flavours of pancakes available.)  The pancakes require 20 minutes from ordering to be served and are described as “light, airy, fluffy, and melt-in-your-mouth pancakes.”

The pancakes didn’t jiggle or wiggle when I tried to shake the plate.  It came with a smear of chocolate on the plate with some various fruits on it.  There was also a container of ice cream on the side.

I thought that the pancake tasted all right and wasn’t as good as the one I had at Hanabusa Cafe.  I was disappointed that it didn’t jiggle. 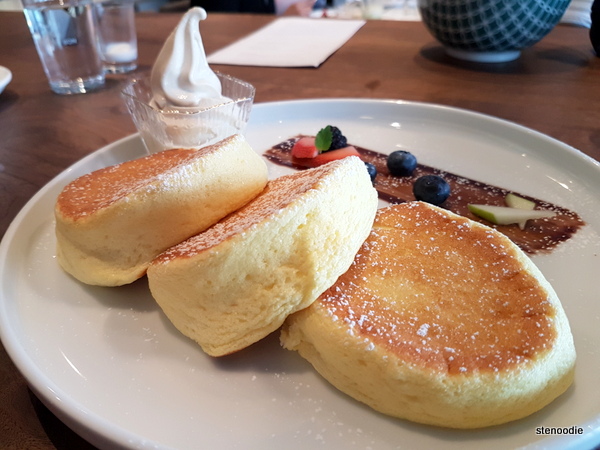 When stacked like this, of course they’re not really going to jiggle

As it was their soft opening at this time, they had a promotion where if you shared a photo of their food on your social media account, you would get 10% off the meal and also a free ice cream.  Thus, we had two small cups of the same flavoured ice cream as that of the soufflé pancakes.  I remember the ice cream melted really quickly. 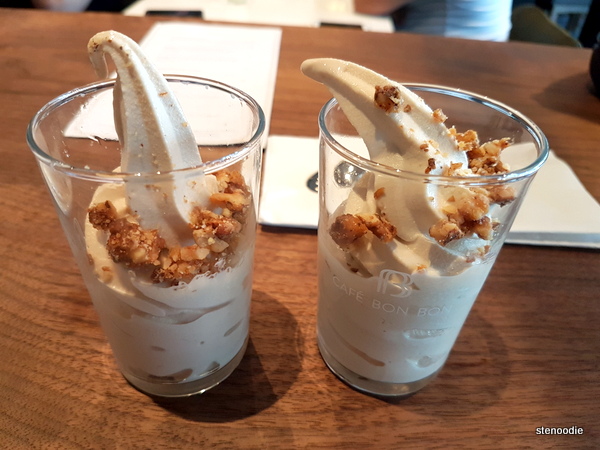 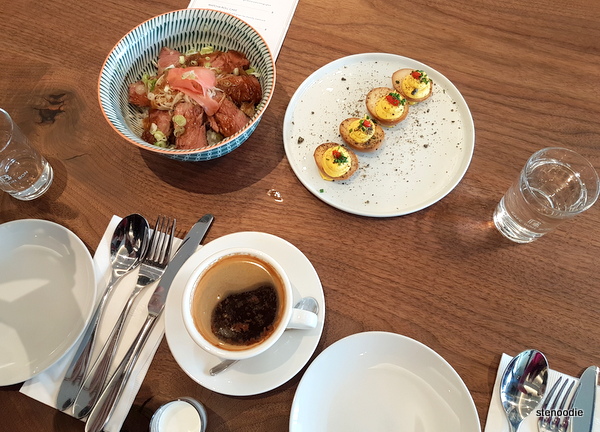 You can see the sizes of the dishes in this photo 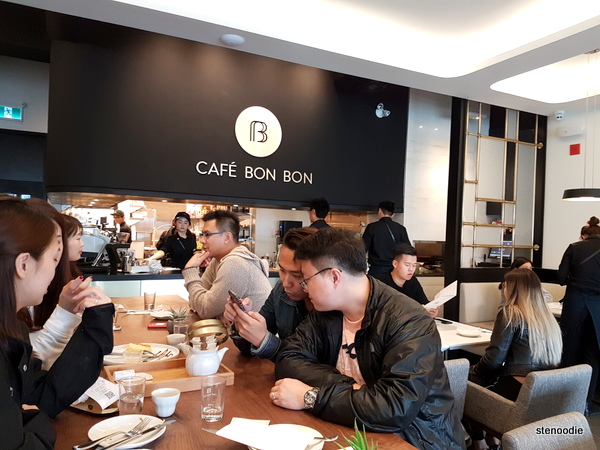 Lots of people were here on a Saturday afternoon

I can’t see myself returning to Cafe Bon Bon any time soon.  The savory dishes tasted really good but the prices were just too astronomical. 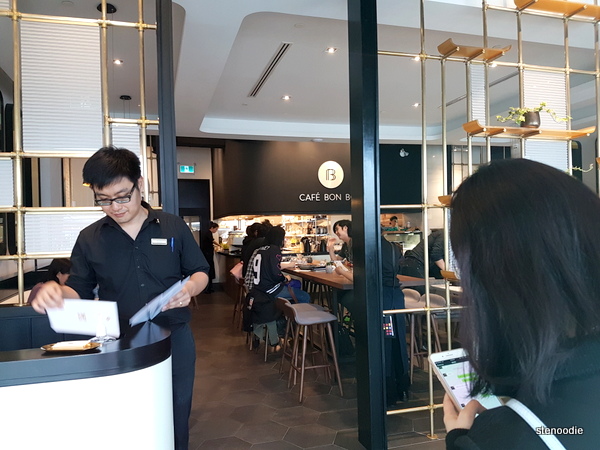 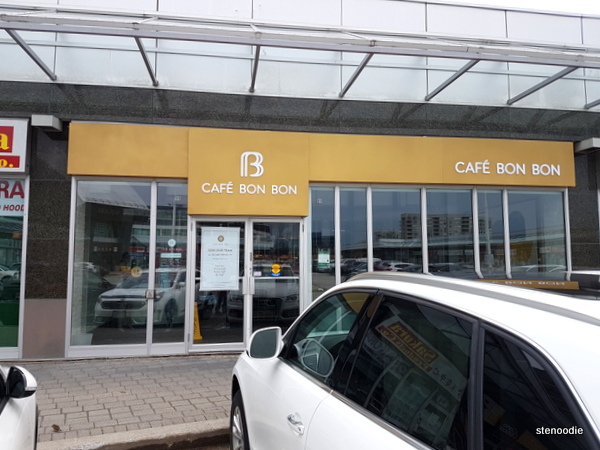 Located at the Times Square Plaza