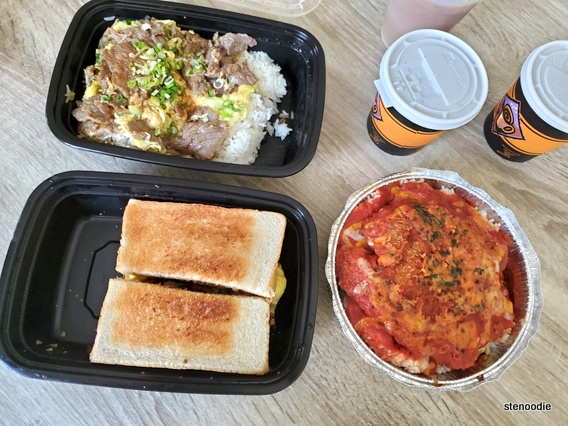 We actually dined at this restaurant sometime after they opened earlier last year before the pandemic hit, but that blog post is part of the backlog that I still have to post, so this one serves as the first one about it.

We were feeling for some authentic Hong Kong style cafe food and decided to order from Cha Kee (茶記) Restaurant for an early dinner.  The first Cha Kee Restaurant that opened is in Richmond Hill at 280 West Beaver Creek Road, Unit #30 (where the former location of Fav Cafe was).  Since then, Cha Kee Restaurant has actually opened up a second location in Markham (at the plaza of Bur Oak and Kennedy Road).

(When Cha Kee Restaurant first opened, there was immediate immense hype about the restaurant and for good reason too.  There’s not a lot of authentic Hong Kong style cafe restaurants in the GTA area or at least one that serves beautiful runny scrambled eggs and other classic comfort Hong Kong style food the way they do.)

I perused their online order website which was available in both Chinese and English and easy to browse with photos of their items.  It was actually 5:30 p.m. at this point and  although I was in the middle of finalizing my order, a note on the website suddenly said “Not accepting order”.  I realized only at that point that the restaurant closes at 6 p.m.!  No wonder.

We called them anyway to see if there was a last ditch effort to order.  The Cantonese-speaking lady on the phone told me that the last order was actually 5:30 p.m.  It was 5:35 p.m. when I called.  Oops.  I was ready to hang up and try ordering another day, but she asked me what I wanted to order.  I told her my order and I overheard her asking the chefs in the kitchen if they were available to make one more order despite cleaning up already.  I guess they wanted to take our business, so our order was accepted.  Yay!  We were told to pick up our order in 15 minutes.  She also asked if we would be paying in debit or cash.  Cash payments for takeout orders had a 10% off (for most items).

We ordered the Beef & Eggs on Rice, Satay Beef with Eggs Sandwich, and Baked Pork Chop.  All three items came with a coffee or tea, of which we ordered an iced coffee and two hot lemon waters. 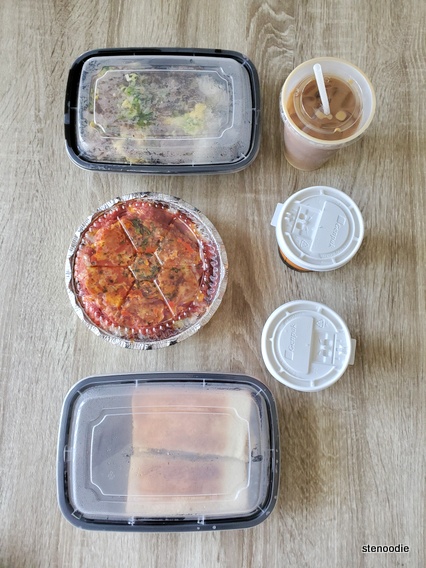 The three items we ordered from Cha Kee Restaurant 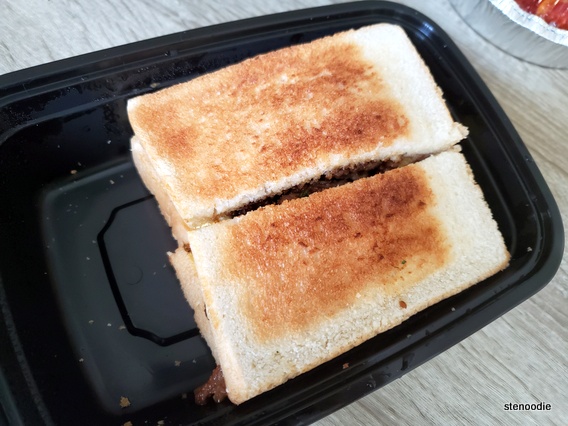 When Ken came back from picking up the order at the restaurant, I was so ready to dig in.  Unfortunately, the Satay Beef with Eggs Sandwich was not served like how they showed it in photos on their website or social media.  I expected the sandwich to sit upright in a paper bag for easy eating — it’s a first world problem, I know.

Because the sandwich was placed in the sealed black plastic container, it meant that during the commute time (about 10 minutes’ driving), the hot sandwich caused a lot of condensation and turned a tad soggy.  This sandwich is best eaten at the restaurant when it’s served hot and fresh. 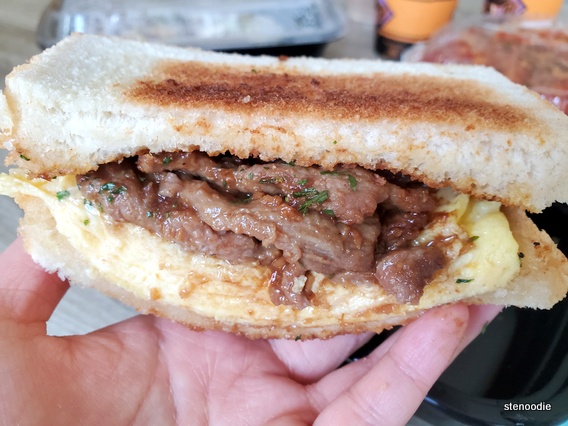 I wish the beef was in thinner slices

The white bread was toasted and thick though; a good thing.  The soft scrambled eggs would have tasted better at the restaurant when served fresh.  The satay beef didn’t have much satay flavour to it in my opinion and wasn’t as smooth and silky as I expected.

My feedback for this sandwich’s delivery method is to put it into a waxed paper bag or at least a container with holes in it so that the sandwich doesn’t become soggy on the customer’s commute home. 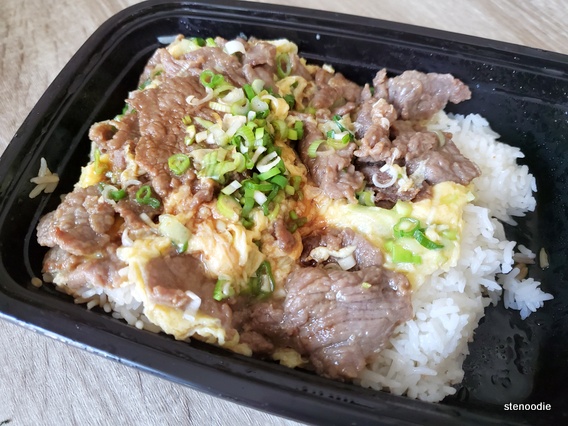 The Beef & Eggs on Rice (had I realized that Ken chose this dish, I might have ordered another type of sandwich so that we wouldn’t have two of the same toppings, but in the rush of placing our order, I didn’t make the connection) was exactly like the sandwich except that it was on rice.  Ha…  The scrambled eggs here were a bit more runny though and tasted better that way.  The beef and scrambled eggs combination though was tastier here with the rice.  There were some chopped green onions on top of the dish too.

We felt that the portion was a tad on the small side and that if we had this as a dine-in dish, the portion would have been larger.  The rectangular plastic container could only contain so much compared to the rice bowls at the restaurant. 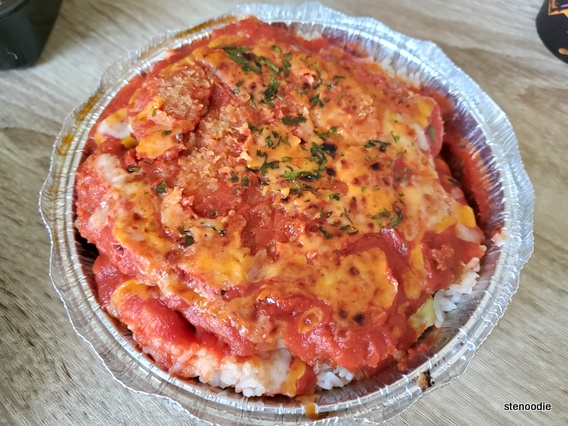 The Baked Pork Chop dish was served in an aluminium container and looked good on presentation.  However, while the pork chop was indeed tender, I thought that the rest of the rice was quite bland.  The rice wasn’t fried rice but just plain white rice.  There also wasn’t a lot of cheese in the dish, which typical Hong Kong style baked pork chop dishes would have a lot of.  There was more tomato sauce than I expected.  Thus, I wasn’t a fan of this dish.

(On a side note, if you want to eat a REALLY delicious baked pork chop dish, head to The Golden Horse Restaurant instead.  Their signature pork chop dish is to die for.  It’s so delicious with fried rice [with scrambled eggs], melted cheese, and savory tender pork chops.)

All in all, I realized from this takeout order that the dishes from Cha Kee Restaurant are best eaten freshly ordered at the restaurant — at least for the beef and egg items we ordered.  The 10% discount though for cash payments was a nice perk.