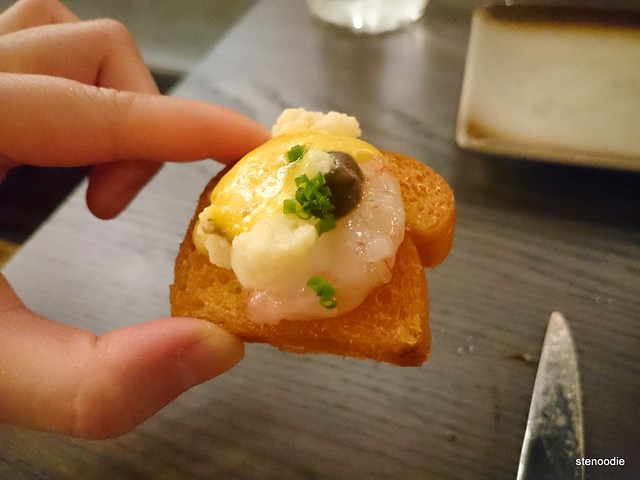 Located at 241 Spadina Ave in Toronto

I’ve been hearing a lot about this restaurant ever since it opened recently.  R&D is located in Chinatown in downtown Toronto and is opened by the winner of the first ever MasterChef Canada cooking game show TV series, Eric Chong, and multiple Michelin star restaurant owner, Alvin Leung, (nicknamed Rebel and Demon respectively; hence the restaurant name).  My friend Betty and I arrived here on a Monday evening for an early dinner at 5 p.m.  We made reservations, but the place didn’t start filling up until we finished eating at 7 p.m.

The decor of the restaurant is really nice.  After you walk past the bar with some nice chairs and tables that seem apt for lounging, the inside of the restaurant reaches deep into the end.  Our host seated us in the main dining area where all of the comfy chairs and artwork were. 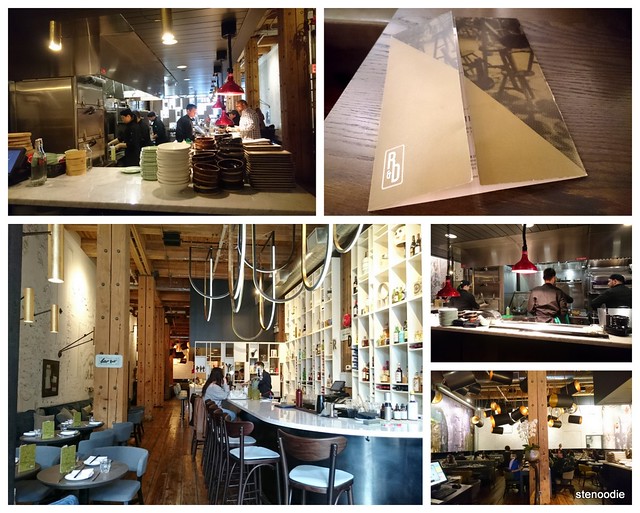 I already knew that I wanted to order the Shiitake Polenta Fries after Jess highly recommended it to me.  We ordered a number of dishes that night to share as most of their dishes are tapas style.  R&D is a Chinese-Canadian fusion restaurant so many of the classic Canadian dishes contain elements of Chinese cuisine in them. 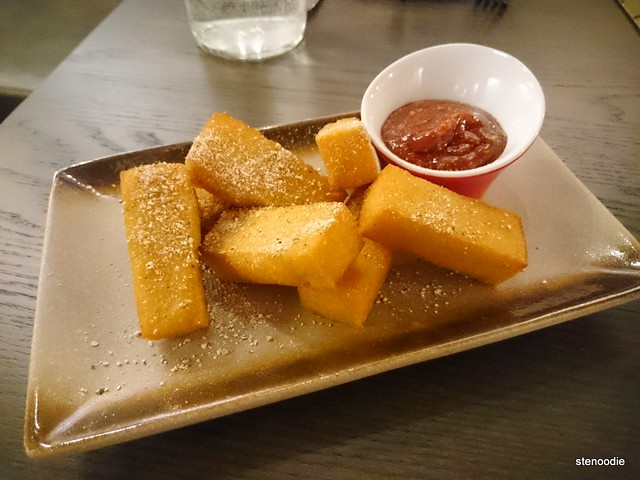 The Shiitake Polenta Fries was the first to arrive since we ordered it as we were contemplating the rest of the menu.  The fries were cut into thick rectangles and freshly fried.  When you picked it up with your chopsticks, you could smell the strong aroma of shiitake mushrooms.  When you bit into it, the shiitake powder on top of the fries was tremendously strong and delicious.  The outside layer is very crispy and the inside is polenta that is mashed into a crumbly texture.  It was absolutely delicious!  It was served with mushroom ketchup but I found that it was more delicious to eat the fries by themselves.  This was a very good appetizer to try! 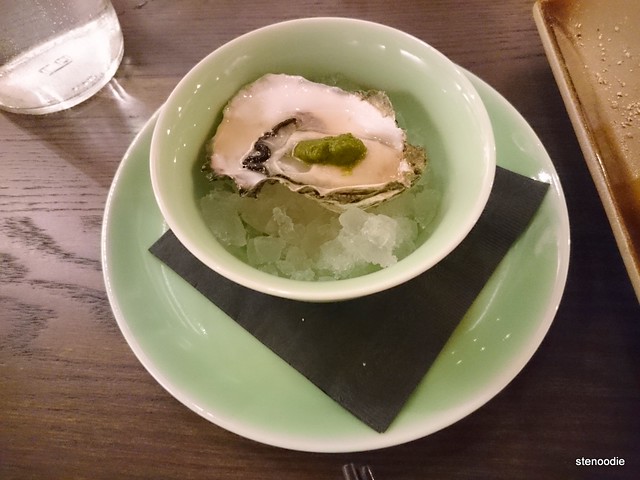 I wanted to try a freshly shucked oyster so I ordered one for myself.  It was presented in a cute little bowl and plate combination where the single oyster was nestled above some ice.  There was also ginger, scallions, and lime on it.  It was a very plump and fat oyster that tasted good but nothing too spectacular. 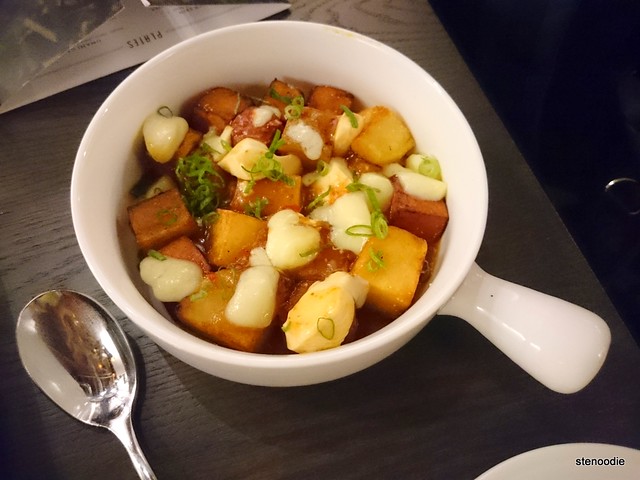 Betty ordered the Poutine to try that was in Mapo style with bean curd.  Ma po style in Chinese is typically made with some spice and bean curds and is a great dish to mix with rice to eat.  I found that the presentation was again so cute; it was in a little white ceramic pot.  You could see the cubes of potatoes cut neatly with the cheese melted over everything.  There were really soft tofu squares embedded throughout the poutine as well.  However, as much as I love poutine, I found that this dish wasn’t exceptionally delicious.  The cheese and soft tofu was great but it wasn’t too tasty for me.  The potato cubes were a little mushy.  I would have preferred actual fries instead of potato cubes. 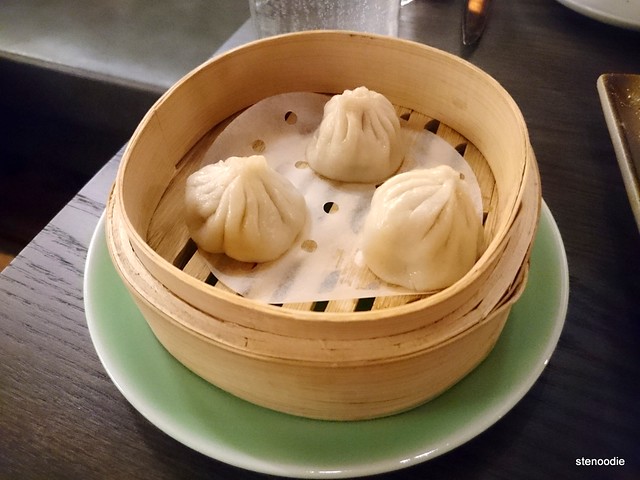 I wanted to try at least one item from the Modern Dim Sum section so we got the Little Dragon Buns.  You could get them either with the spicy sichuan lamb or chicken tom yum fillings.  I chose the spicy sichuan lamb buns.  I thought the name was a bit of a misnomer because I actually thought they would be white steamed buns.  Instead, they were dumplings!  It was pretty good though and it was definitely a little spicy with a gamey lamb flavour but not too much.  I liked how the hot juice from the dumpling had to be sucked out and was very tasty. 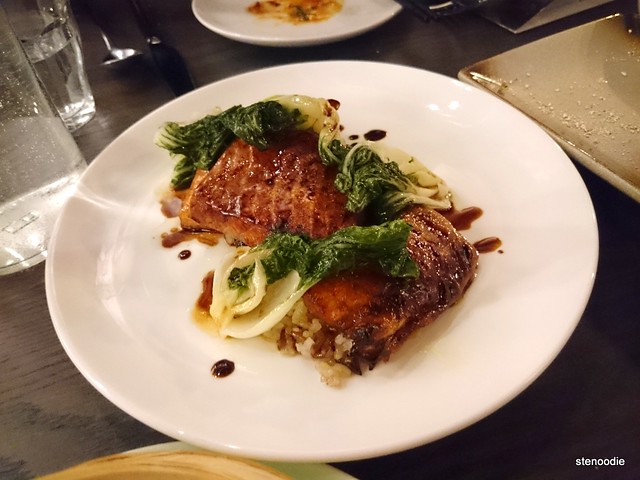 Lastly, before we got to desserts, because I wanted to try out one more dish, I picked the Shrimp Toast (also part of the Modern Dim Sum section).  It came with three pieces and were little morsels of deliciousness!  This was the surprise dish of the night that I ended up absolutely loving. 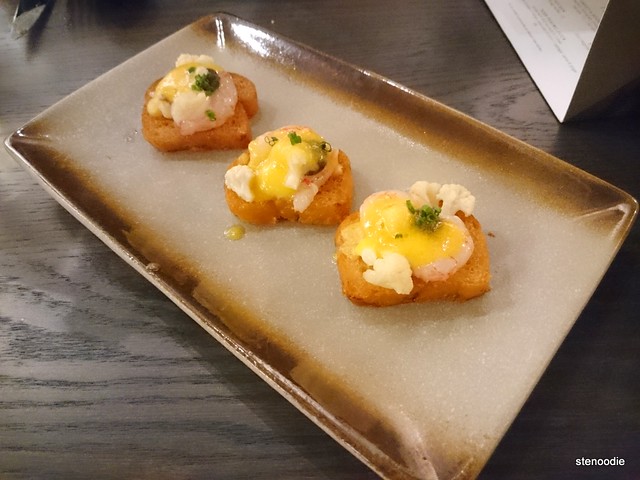 The Shrimp Toast contained spot prawn, black truffle, cauliflower, preserved duck egg, and English mustard.  It turned out that the prawn was actually raw and when you bit into the little toast, it was crunchy with a big burst of flavour.  The prawn, because it was raw, tasted like ebi shrimp to me.  It had a gooey flavor.  When this was mixed with the preserved duck egg and English mustard, it was a fantastic combination of flavours in the mouth.  I loved it even though it was so small. 😀

Eric actually won the CTV MasterChef competition with the Lobster Chow Mein dish.  I didn’t get to try it this time.  I would like to try that next time I visit and also their much-talked about and much-ordered General Sanders’ Chicken (it is similar to chicken and waffles except that they serve with HK style egg waffles — how unique!). 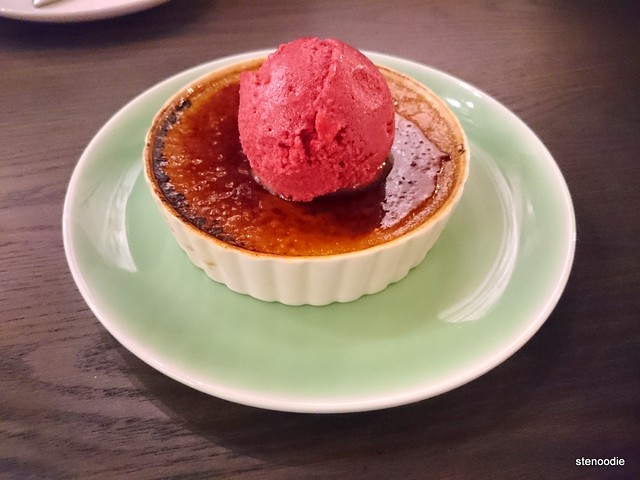 For dessert, we shared the Coconut Sugar Crème Brûlée.  It was a beautiful dessert that was decorated with a scoop of sour cherry ice cream on the top.  It was also a delicious dessert!  The crème brûlée was made nicely with a perfectly light glazed top.  You couldn’t taste much coconut sugar, or at least we didn’t, but the cream was so smooth.  I really, really liked it.  I also really liked the tartness of the sour cherry ice cream that accompanied it.  It was a great fit! ^_^ 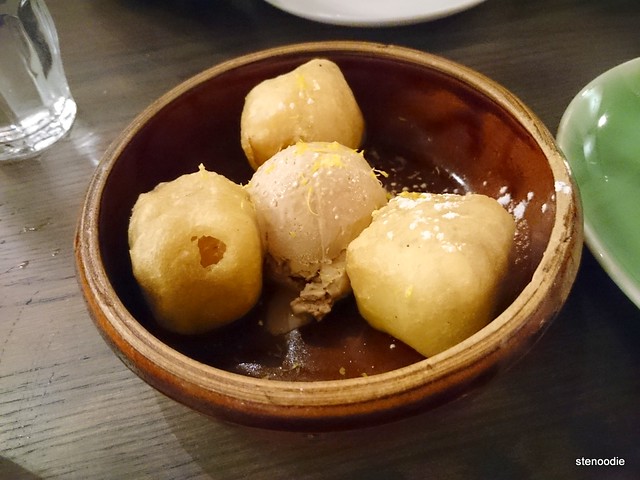 On the other hand, the other dessert that I tried was the Crispy Smoked Milk that turned out to be not that great.  It sounded like a unique choice to me.  This dessert was similar to those fried milk Chinese desserts that you see often (like I had here).  For this dessert though, the result was that the fried milk tasted very smoky and I didn’t like that at all.  It almost tasted like it was burnt!  The malted milk ice cream was pretty good though.  I wouldn’t recommend this dessert since it tasted so odd.

Before we left, we were able to get a picture with the winning chef, Eric Chong!  It was so nice that he actually came out from his open kitchen area where he was cooking to take a picture with us.  Mind you, we had to wait a few minutes until his hands were free, but we really appreciated that he came out to shake hands with us and ask us how the food was like along with the picture.  We were also lucky that we were able to meet him that night because Eric doesn’t work in the restaurant daily. 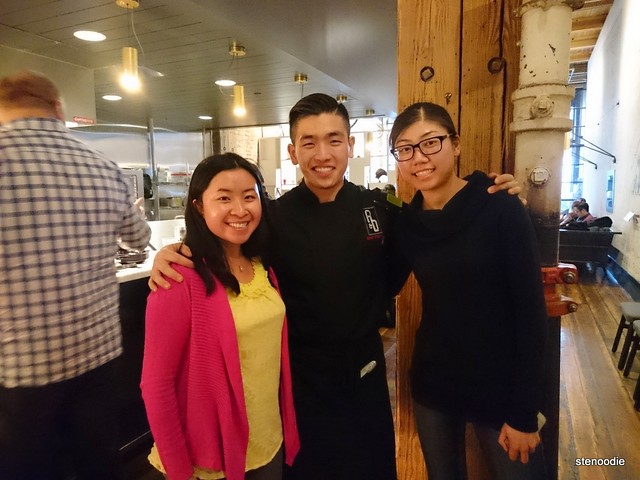 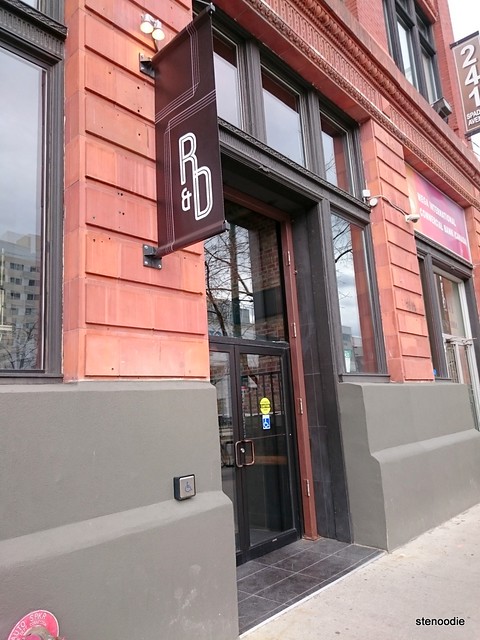 Nestled in the heart of Chinatown on Spadina

R&D is a restaurant I would return to so that I can try the rest of his signature dishes as well as try a couple more dishes on the menu.  I love fusion dishes and this restaurant did most of the items quite well! 🙂

3 Responses to Dinner at R&D