Media Tasting on the Patio of Tapagria Spanish Tapas Restaurant 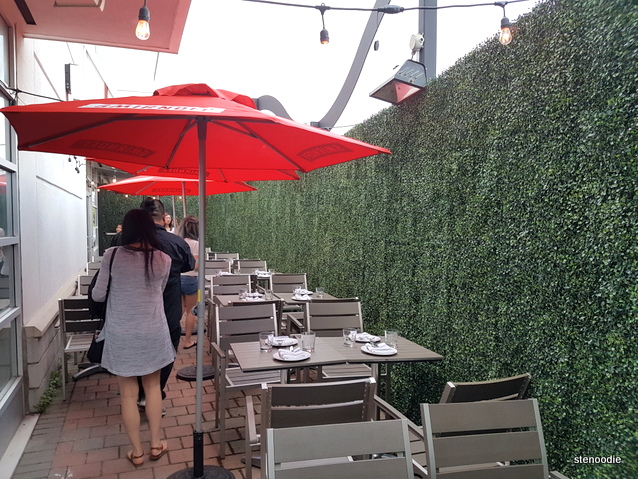 “It’s all about the new patio!”  That’s what we were told when we were invited to Tapagria Spanish Tapas Restaurant last Thursday for a media tasting.  This was part of a dual event that DKLoEvents hosted for us (the first part was next door at It’s a Bao Time — blogged here).  🙂

I had been to Tapagria Spanish Tapas Restaurant before.  I had been here for dinner with two friends back in 2015 when it first opened — you can view that blog post here.

I was excited to return again to try out what they were going to offer us as part of the media tasting and in particular to see their new patio.  There aren’t a lot of restaurants that offer patio seating in the uptown area — patios seem to be more of a popular thing in downtown Toronto.

After we were completed our part one tasting at It’s a Bao Time, we slipped into the patio of Tapagria Spanish Tapas Restaurant via a “secret passageway” ;).  It was so convenient! 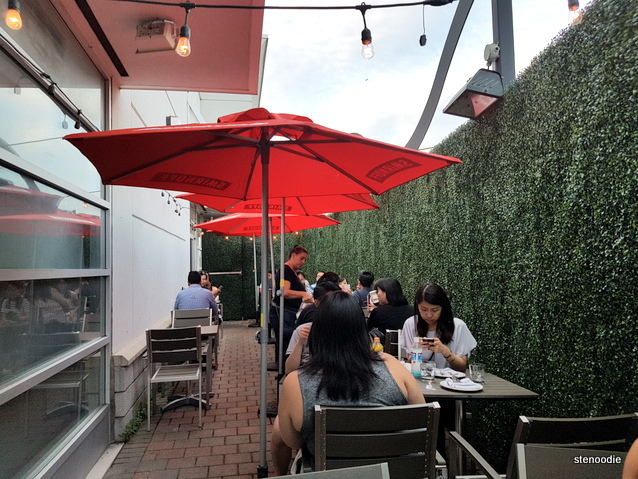 I really admired the look of this little patio that Tapagria had created for its customers.  There was an artificial green wall of shrubbery that helped maximize privacy and give the patio space a nice touch of chic modern look.  It was an elongated space for some outdoor tapas and sangria (it’s only recently that I learned that that’s how the name “tapagria” came about — tapas + sangria.  How creative! :)).

We took a seat at a table of our choosing at the patio.  There were large red umbrellas shading us from the setting sun’s lights and there were naked lightbulbs twinkling above us.  It really was such a beautiful patio space! 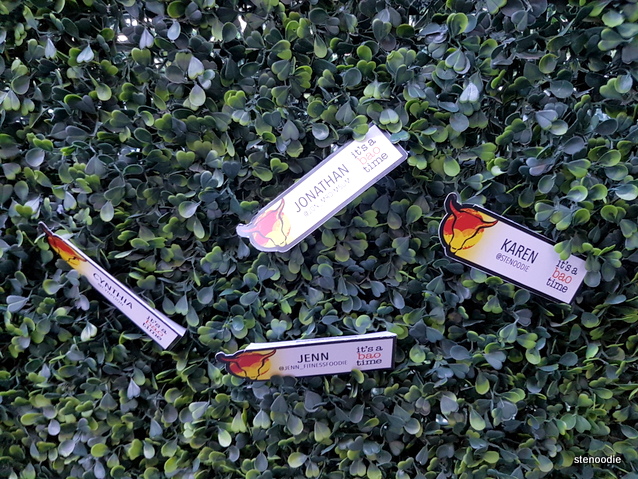 Jen had an idea of sticking our name tags to the artificial green wall… and her idea just STUCK (get it? :P)

Everyone received one drink ticket in which we could choose one drink out of four:  sangria, beer, white wine, or red wine.  Of course, I chose the sangria to stick with the Spanish theme. 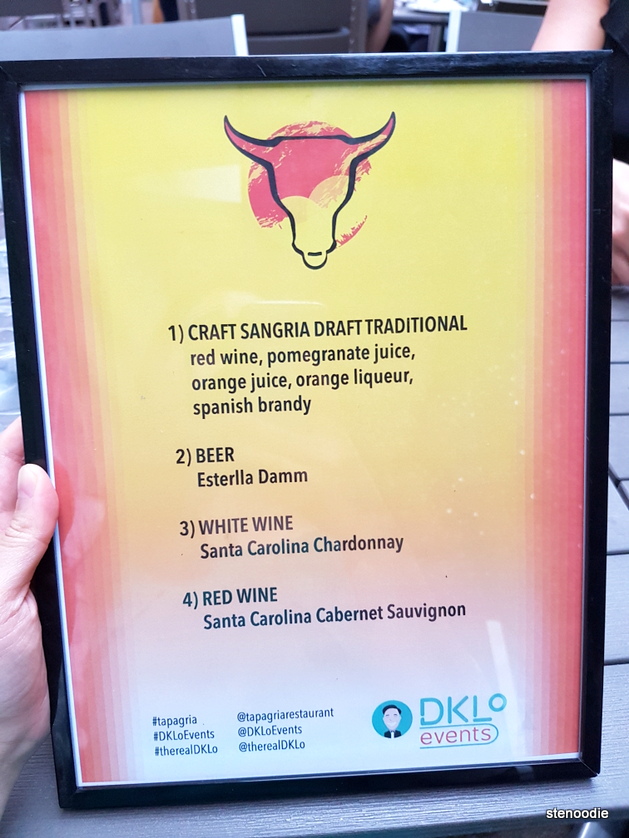 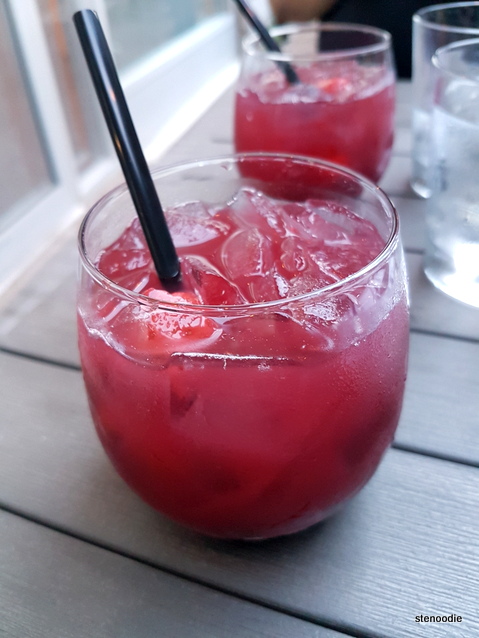 The Craft Sangria Draft Traditional was made with red wine, pomegranate juice, orange juice, orange liqueur, and Spanish brandy.  It was a strong drink at first sip and then the ice cubes diluted the drink a little bit.  It was really nice to enjoy a cold drink on the patio.  We were there during really nice weather that evening too; calm, no wind, no humidity.  It was perfect.

A pre-selected number of tapas arrived on our table to share with our tablemates.

I really enjoyed the Spanish Meatballs!  This was my second favourite item of the night!  These Spanish meatballs were covered with cheese and tomato sauce.  I liked these so much because they were so mushy, tender, and full of flavour!  One of the best meatballs ever!  Also, the cheese on these were melted and delicious.  Mmm, so good! 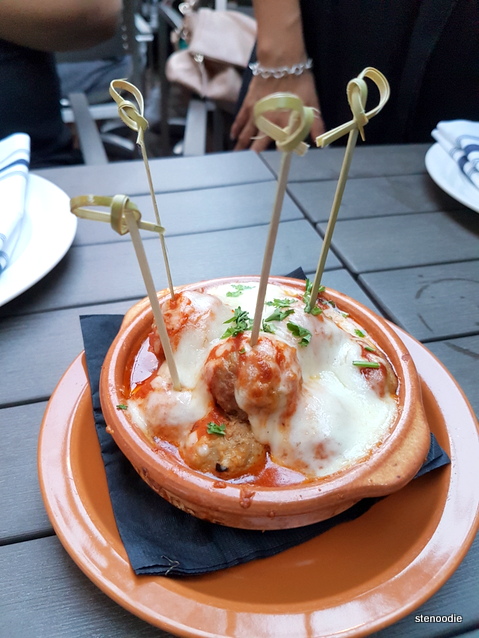 The Mediterranean Octopus was served with bread.  The majority of everyone was so full from the previous tasting at It’s a Bao Time that our tablemates didn’t even touch the bread.  The octopus was cut into small bites and fitted with twine toothpicks. 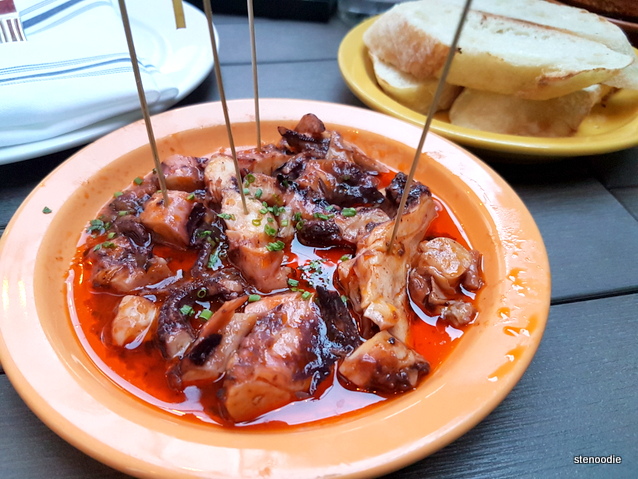 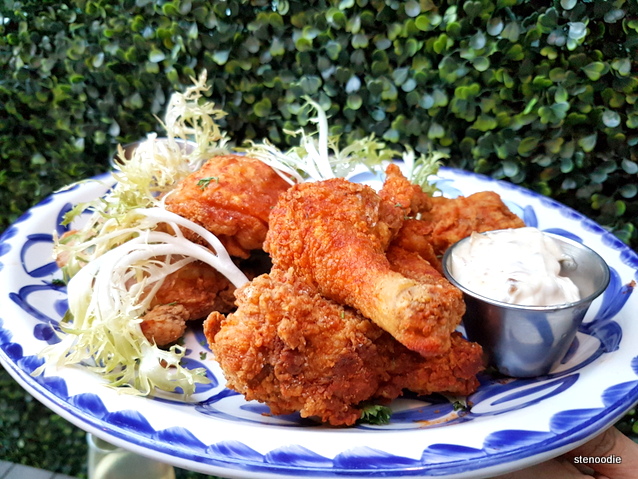 Mmm, this was the top favourite item from everyone that night:  The Fried Chicken!  This not only tasted amazing but was presented beautifully too on a blue and white patterned plate.  There were two sauces, a red hot spicy one and a creamy one.  I love fried chicken that is well breaded and fried and this one was perfect.

The fried skin was fried to a nice crisp so that when I bit into it, even my tablemates heard the crunchiness of it.  The skin was slightly seasoned too.  It was great!  Best of all, the inside of the chicken was very moist and tender.  Whether pairing it with the creamy sauce or the hot sauce or not, the fried chicken was delicious.

To finish off our tapas style dinner, we enjoyed the Churros with Dulce de Leche.  The dulce de leche had a thick creamy consistency and went well with the churros. 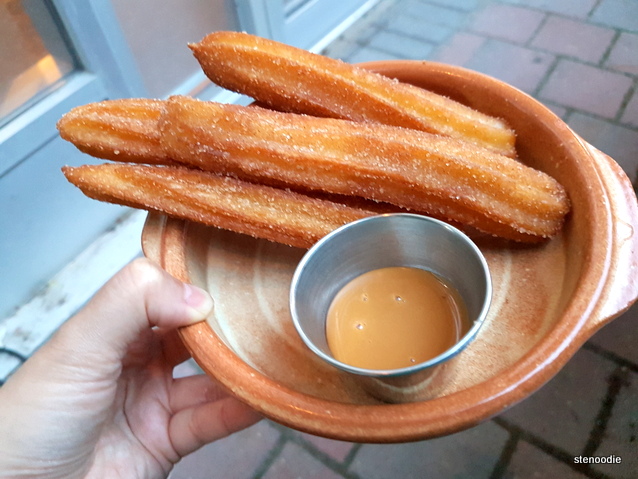 What a beautiful night it was to enjoy a tapas dinner (part two) on the patio!  Thank you so much Darren for hosting the event and to the staff at Tapagria Spanish Tapas Restaurant for having us!  (Although Darren hosted the dual event for us that night, we paid $15 per person for the event.) 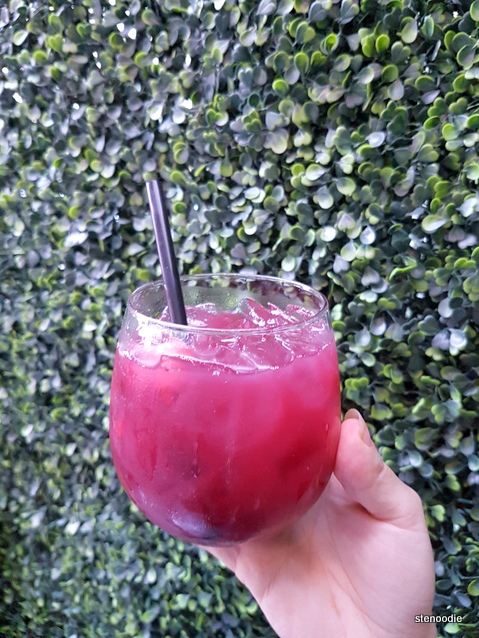 Red sangria against the green wall 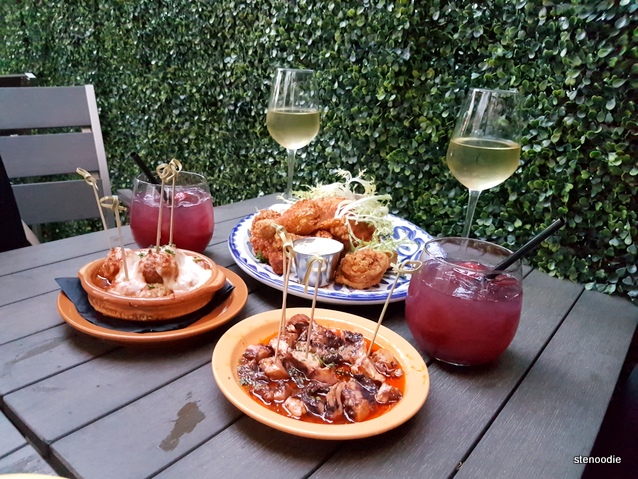 Our lovely meal on the patio 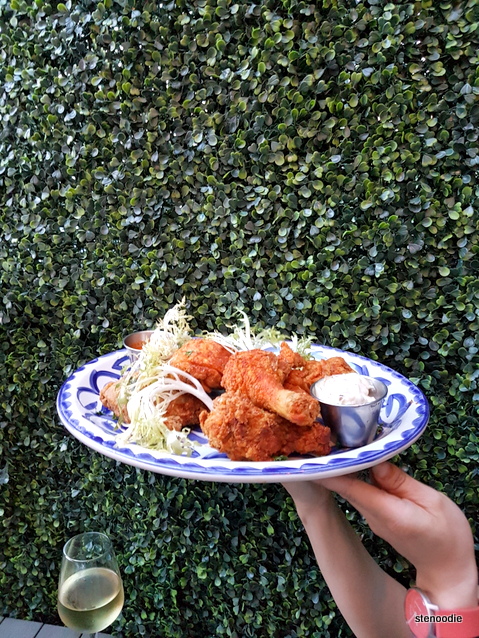 FTC Disclaimer:  Although DKLoEvents and Tapagria Spanish Tapas Restaurant invited me to a complimentary tasting, the opinions expressed here represent my own and not those of the companies.