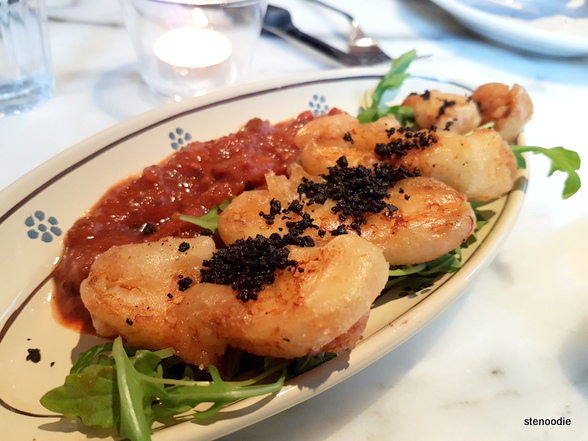 Thanks to us leaving early from work and the original restaurant that we wanted to go to being full, we took Nancy’s advice and headed to Sud Forno for dinner at around 6 p.m. on a Wednesday night.  I didn’t even know this gem of an Italian restaurant existed in the Financial District area!  (Although it’s closer to the Yonge Street side and probably isn’t as prominent.)

We walked in and got a table right away (we didn’t make reservations).  Since the hostess astutely noticed that we had luggage with us and the restaurant was on the second floor, she kindly directed us to the elevator.  Before heading into the elevator though, I noticed how beautiful and intricately modern the first floor space was (I later learned this was the Italian cafeteria-style “la Mensa” for grab-and-go items or a quick meal for breakfast or lunch).  It was so nicely designed and felt so homey. 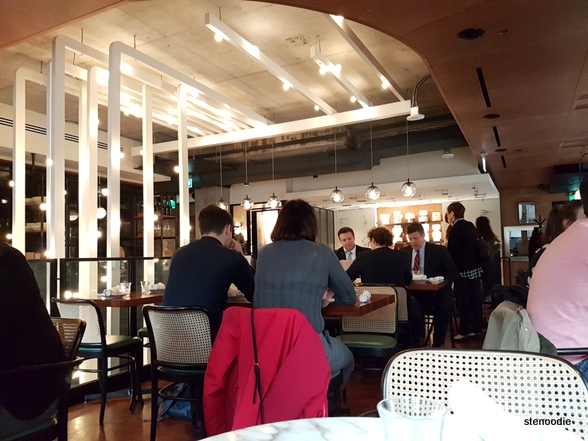 View of the second-floor restaurant

We got a nice corner seater on the second floor “Da Geppetto” dining room, which overlooked Yonge Street and Temperance Street.  It was such a cozy spot!

Upon looking at the fold-out paper menu, I was surprised and impressed that the menu seemed similar to ones I’ve seen in Rome, Italy with the “primi” and “secondi” choices.  (In Rome, it’s all about the first and second plates and not so much about the appetizers and mains.) 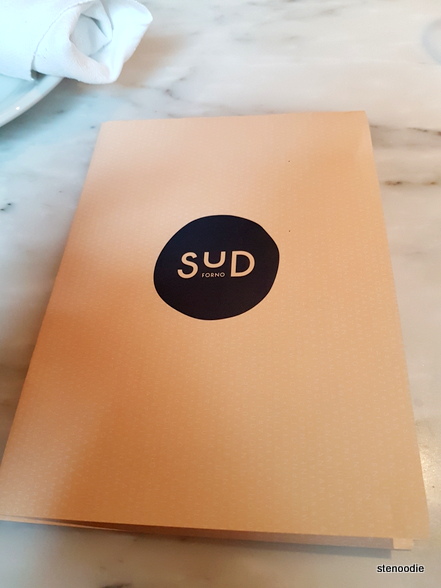 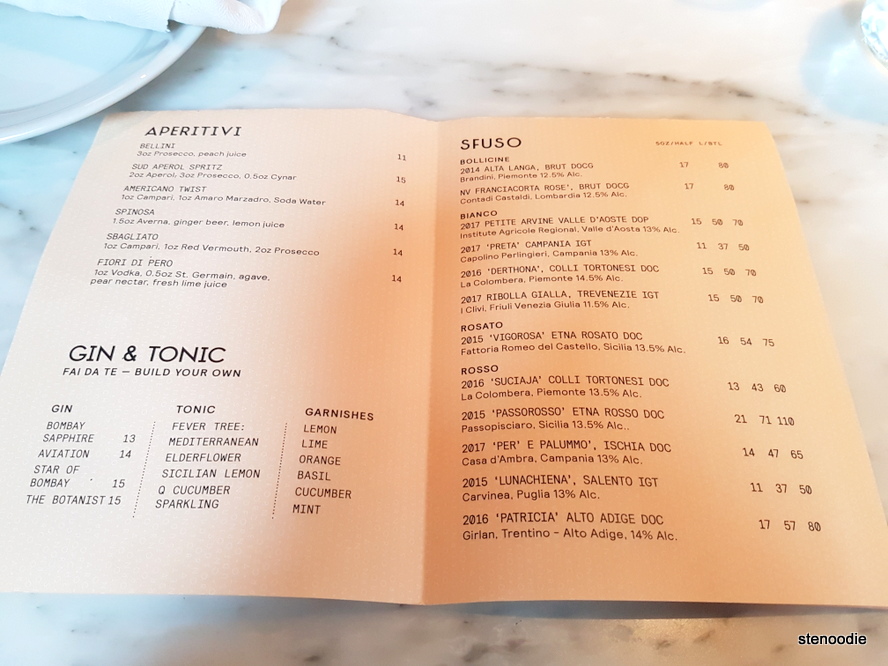 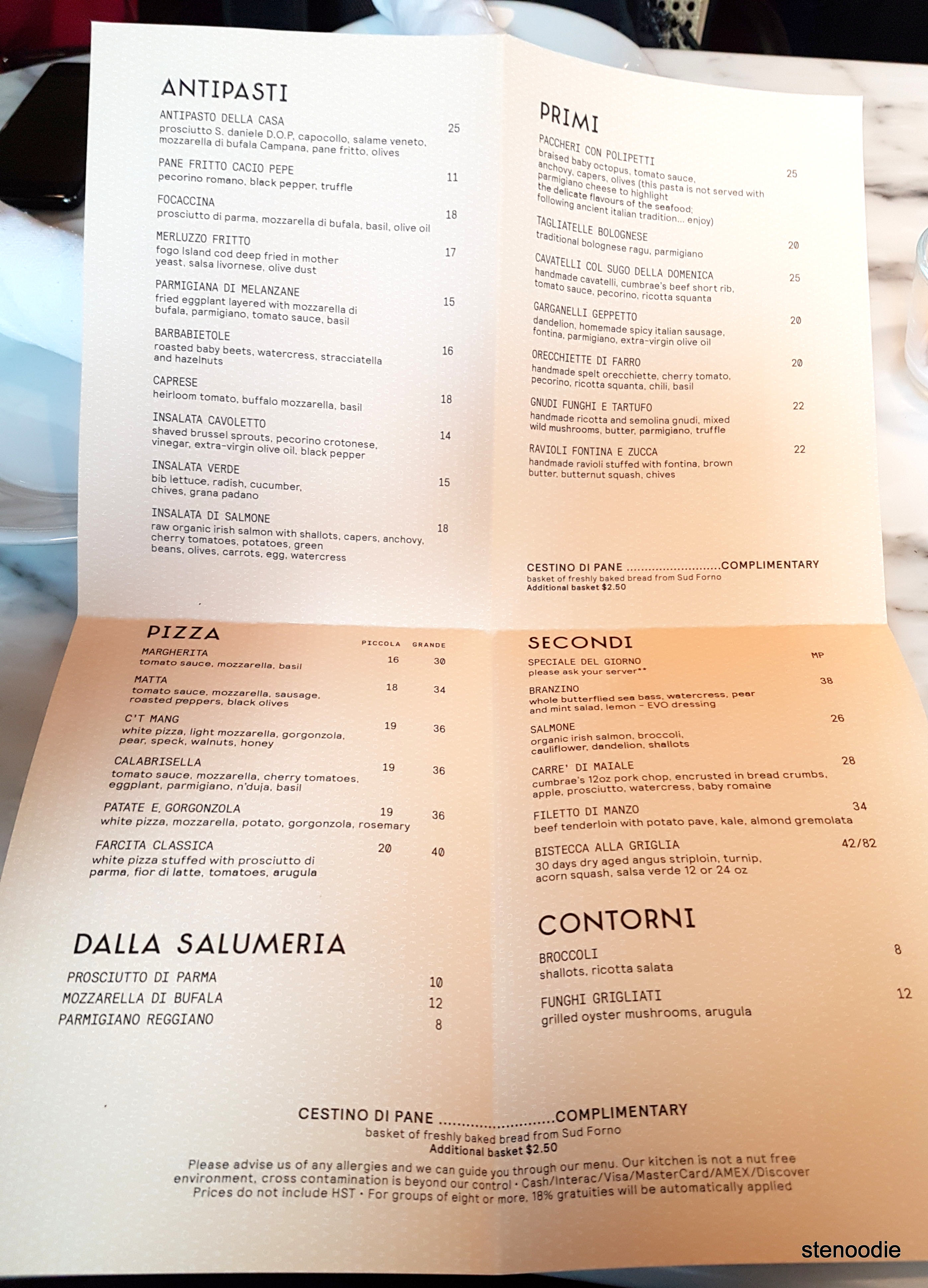 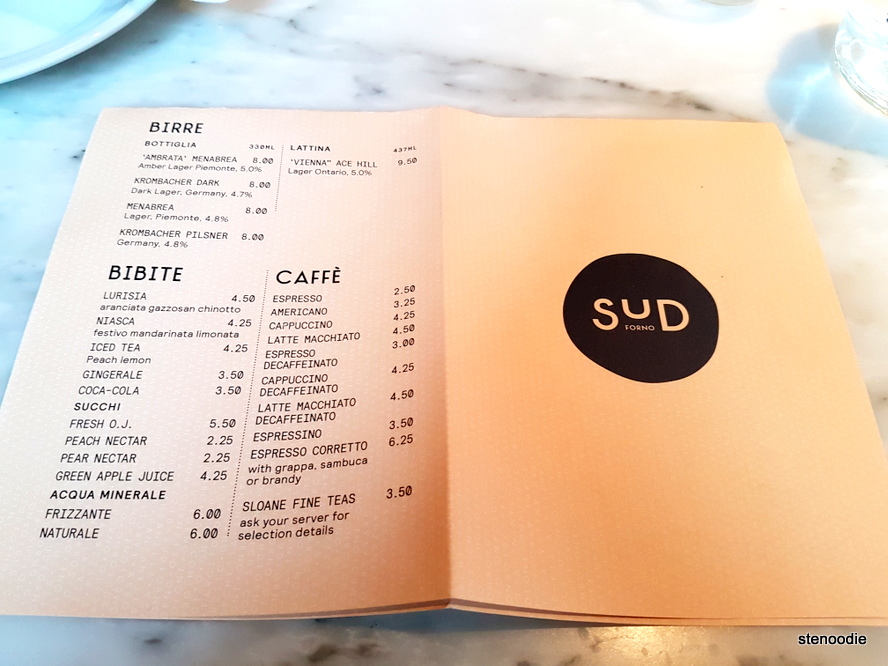 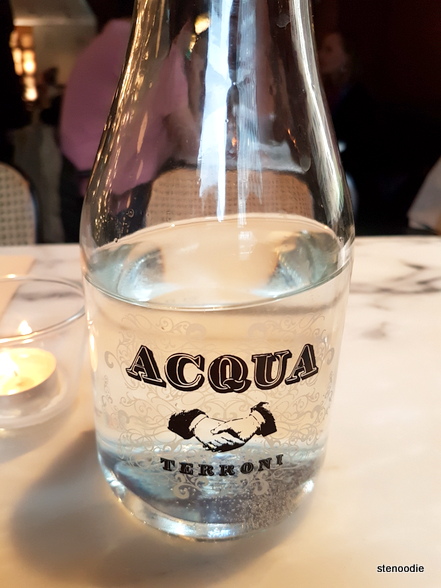 Water bottle on our table

I was so impressed that I definitely wanted to try the menu to the fullest.  Neither of my tablemates that night wanted any sides to their main dish, but I went for the Merluzzo Fritto antipasti.

We were first given water for the table (I noticed how the water bottle showed “Terroni”.  It was then I found out that Sud Forno is actually a sister restaurant to Terroni!  Fond memories of that restaurant rushed up when I saw that.

We were also given a cloth basket of bread with a container of olive oil.  The bread was nicely fluffy and soft in the middle while the crust was a tad hard.  The olive oil had a slight bitter aftertaste, which I was not used to. 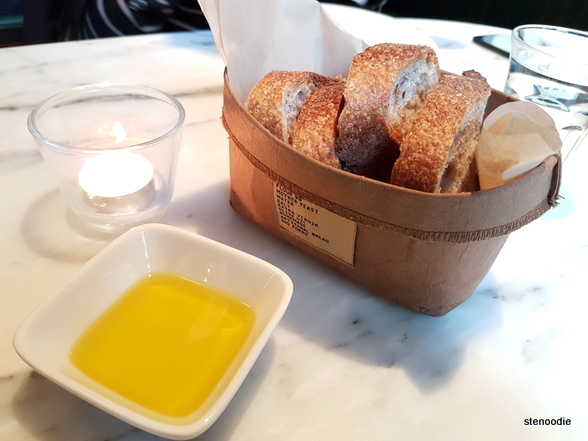 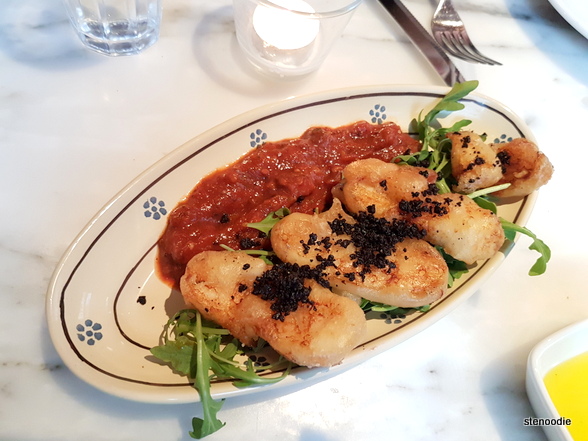 The Merluzzo Fritto had four pieces of Fogo Island cod deep fried in mother yeast with salsa livornese and olive dust.  It was a nice antipasti dish, and I dug in right away.  It’s not until I started working more this past year that I realize why people unwind by eating after a full day of work.  It’s just so relaxing.

The cod was nicely fried and I liked the salsa livornese on top.  The greens on the side helped to break up the oiliness as well.  I really liked this dish!

For my main, I chose the Orecchiette di Farro pasta from the Primi section of the menu.  Once I saw that they had orecchiette on the menu, that was pretty much an automatic order for me.  I really enjoy this type of pasta and wanted to see how they prepared it and its taste. 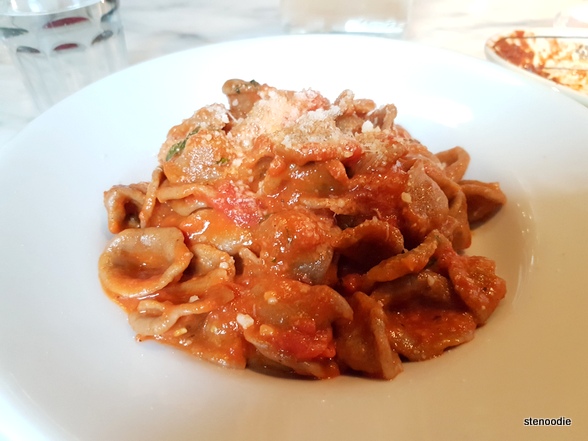 The Orecchiette di Farro was handmade spelt orecchiette with cherry tomatoes, pecorino, ricotta squanta, chili, and basil.  It was actually a simpler dish than I expected.  It was literally orecchiette pasta, cheese, and tomatoes.  I had been trying to avoid eating nightshades for the past year, but this dish was an exception.

I was so impressed with the texture of the orecchiette!  It was afraid that the pasta might be too al dente for my taste, but it was perfect.  It was slightly chewy and firm but thoroughly cooked.  The sauce accompanying the pasta was ample and had a slight heat to it as well.  Even though I preferred no tomatoes with my meal, the cherry tomatoes were cooked to be soft and plump.  It was really nice.

My dish was more than enough for me, and I packed the rest to go in a paper container.  I love it when restaurants use environmentally friendly containers! 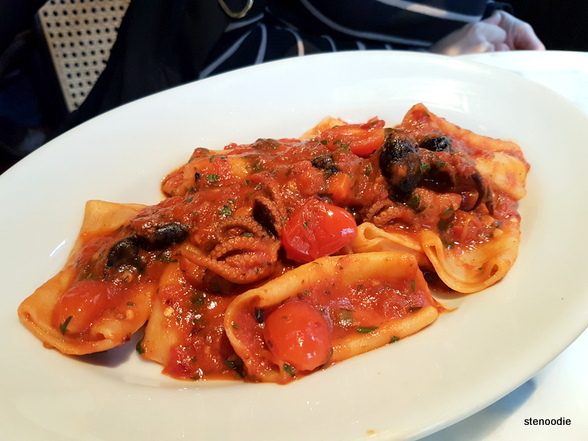 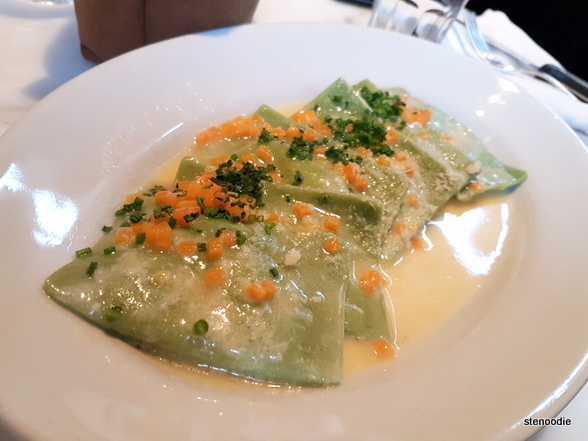 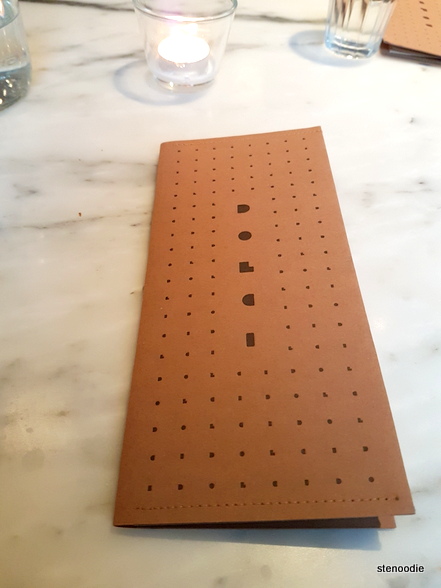 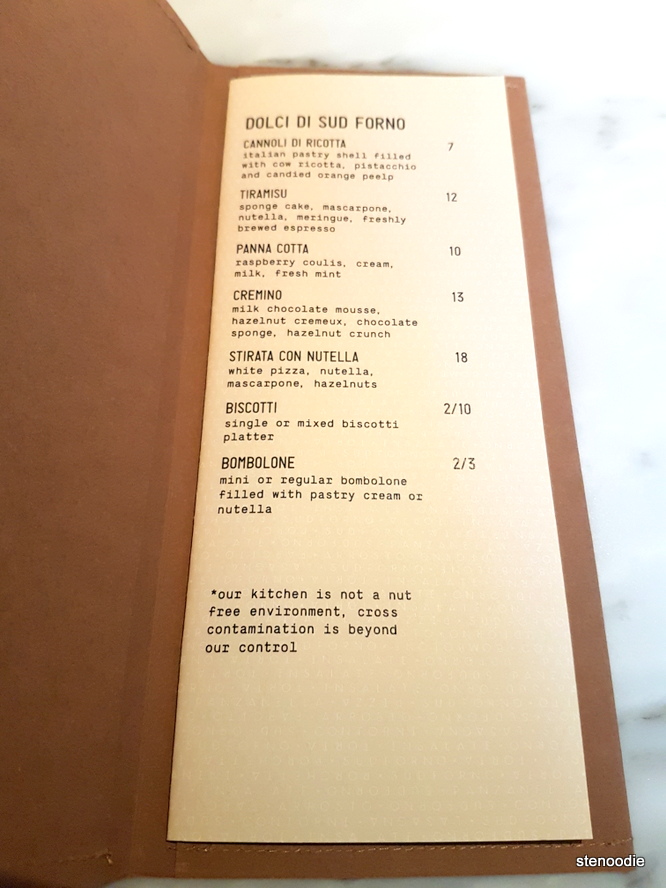 While Nancy ordered a Latte, me and Christal both opted for the mini Bombolones on the recommendation of Nancy and the server.  While she chose the Nutella option, I selected the vanilla pastry cream. 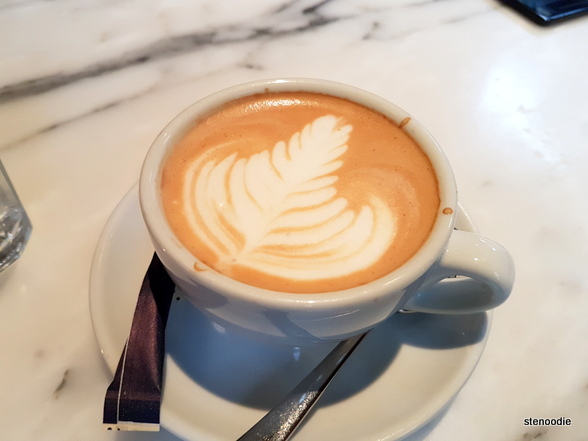 Each mini Bombolone was befitted on the dessert plate with some fruit on the side.  I can describe this dessert as a cream puff!  The pastry cream inside my mini Bombolone was delicious and so smooth!  They have a larger version too at $3. 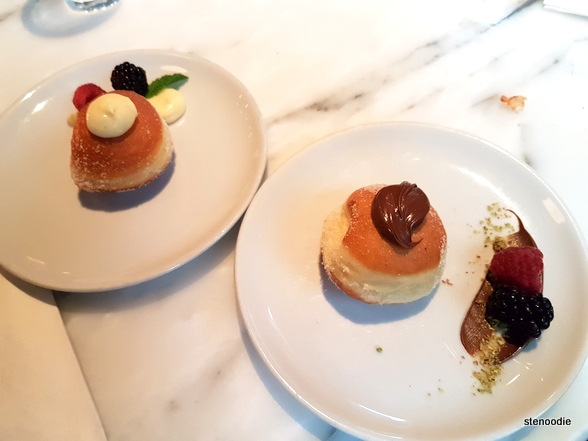 2 Bombolones, one with Nutella and one with pastry creme 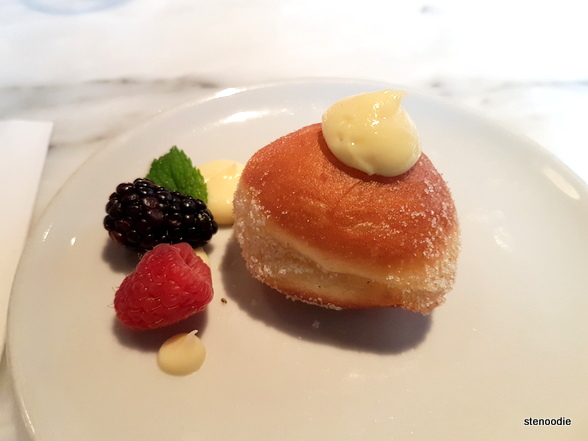 I enjoyed the visit here at Sud Forno so much!  I definitely want to return again to try more of their dishes on their menu.  All of their dishes seem so authentic, and I was greatly impressed with both of the items that I chose that night (the dessert was great as well). 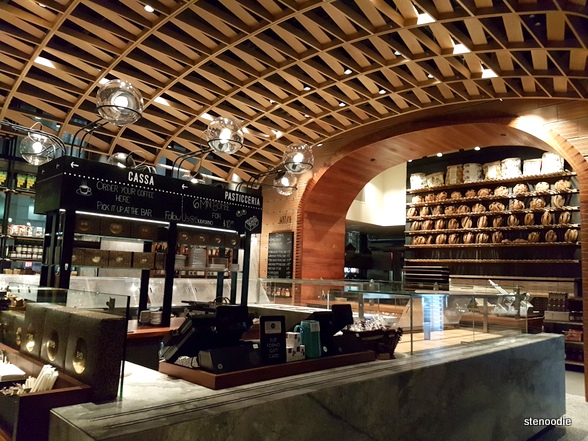 Our server was rather cold and unfriendly that night.  She didn’t even come over to check up on us after our mains were served to ask us how the food was.  And isn’t it kind of expected that the staff in these types of restaurants would do that?  Luckily, the food runner was really nice and smiley that night.  Nevertheless, the wonderful food, atmosphere, and company I was with more than made up for the lack of service.

It appears that Sud Forno has a second location on Queen Street as well!  I’m so surprised that I hadn’t heard of the name Sud Forno at all prior to this visit! 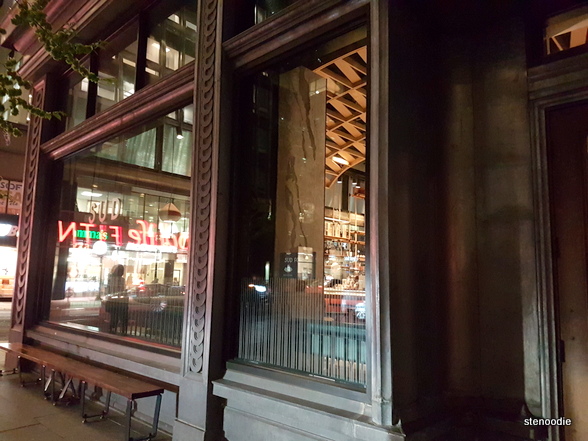 It’s on the corner of Yonge Street and Temperance Street