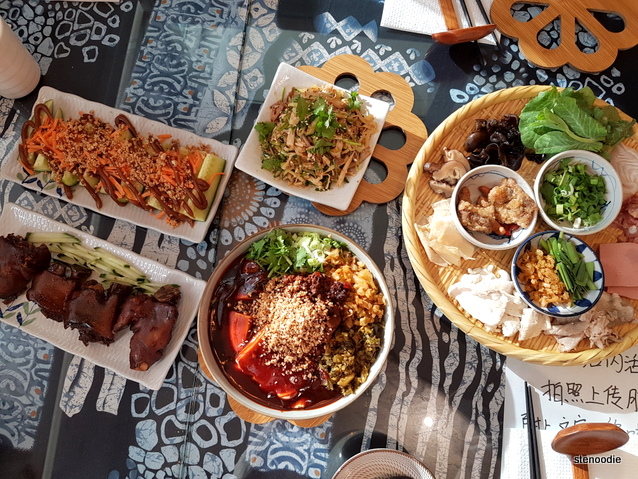 This past Wednesday, I was invited to Origination Noodle for a private tasting thanks to Sweven Media.  I arrived promptly at 6 p.m. and was the first one to arrive even before Minnie, the hostess.

Origination Noodle House is located at 633 Silver Star Boulevard and takes over the unit that used to be a previous noodle house (blogged here) as well as several other reincarnations of Chinese and Japanese restaurants.  (Does anyone believe in feng shui?! :P)

Anyway, the new owners had renovated the new place nicely and Origination Noodle House actually has a first location in downtown Toronto in Chinatown.  This is their second location expanded to uptown in the best part of Scarborough/Markham since it caters to many of the locals living nearby.  Origination Noodle House serves Yunnan rice noodles in traditional cross bridge style as well as dry savory ones that you mix up.  They also had a large variety of appetizers, drinks, and desserts too that are all traditional to what is local in Yunnan.  The co-owners, Clover and Bruce, are from Yunnan and bring these flavours directly from the province in China. 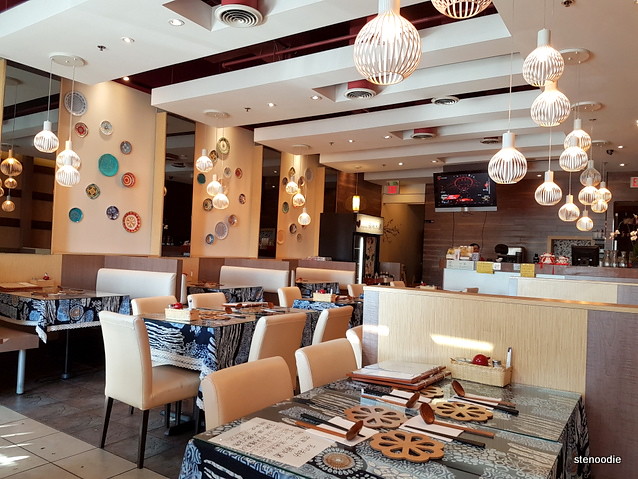 Their interior gave such a warm and cozy vibe!

I really liked the interior of the restaurant.  They designed it with lots of small details so that the entire space felt very homey.  There were coloured ceramic plates arranged nicely on the wall, clean and crisp design on the lights, and even the table cloth was brought directly over from Yunnan. 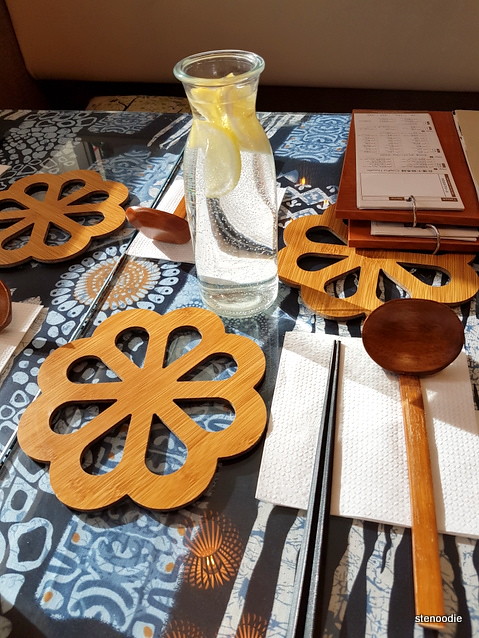 Since my mom and I were the first ones here, we were directed to sit at the table closest to the right side corner of the restaurant.  We looked over the menu while we waited and were served a pitcher of lemon water.  Not long after, Minnie arrived and introduced herself to us.  She welcomed us and introduced some items on the menu to us to pick and choose from.  At this time, another set of food instagrammers arrived and sat at the table next to us (hi @myfoodnation!). 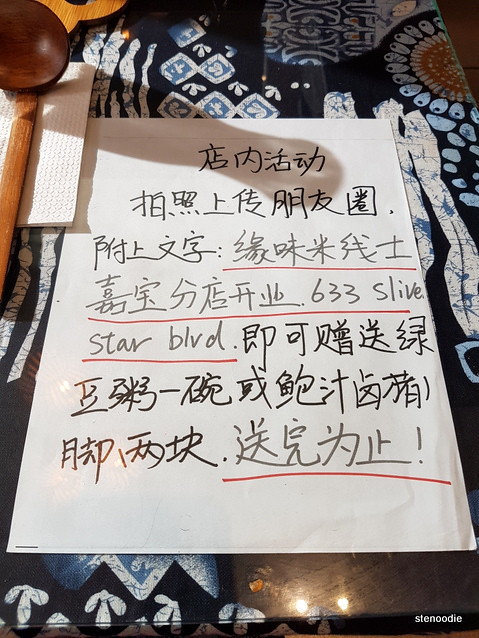 This says that if you post a photo on social media with their address, you can redeem a free item on your next visit!

As we were picking our items, Bruce, the co-owner arrived into the store and said hi to us.  He gave each of us a brief explanation about how Yunnan cross bridge rice noodles came to be.  I’m glad that he decided to explain the story twice to us separately because I wasn’t able to hear him at first when he sat at the other table. 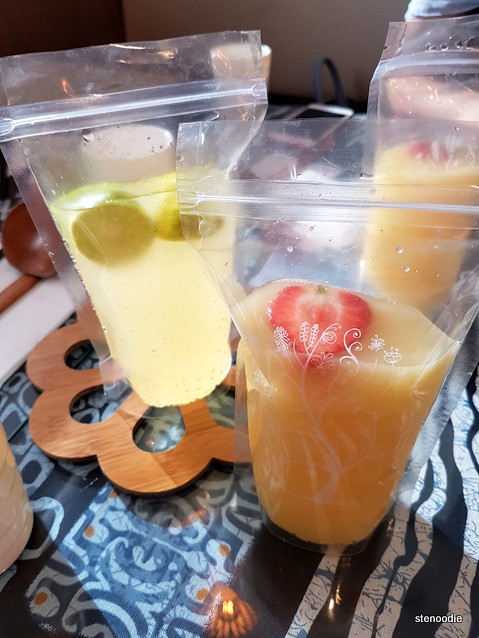 The first to arrive for the drinks weren’t the drinks we had picked from the menu but a special drink that Bruce was intending to bring out to their customers soon.  It was characteristic of the drinks in a plastic bag that some locals in Asia will be familiar with.  We tried two flavours, a mango soda with a strawberry in the bag and a lime soda with two limes in it.  It was definitely a soda drink and was sweet yet refreshing.  Tony gave the idea to Bruce that they should freeze up the drinks so that it becomes more like slush and will probably become a great idea for the downtown customers to enjoy on a hot day.  Bruce was really intent on listening to what we had to say. 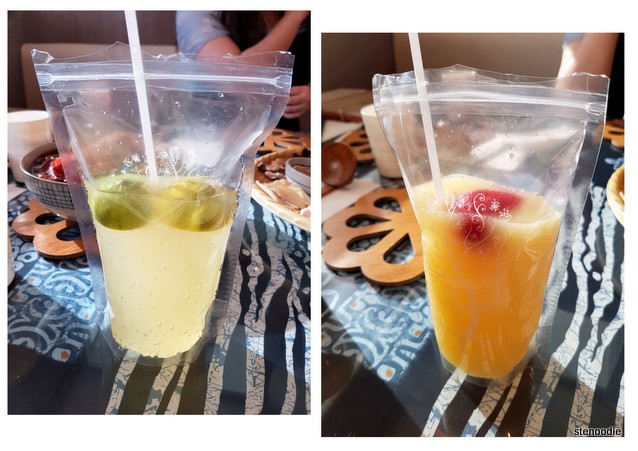 Lime and mango with strawberry soda drinks in a bag 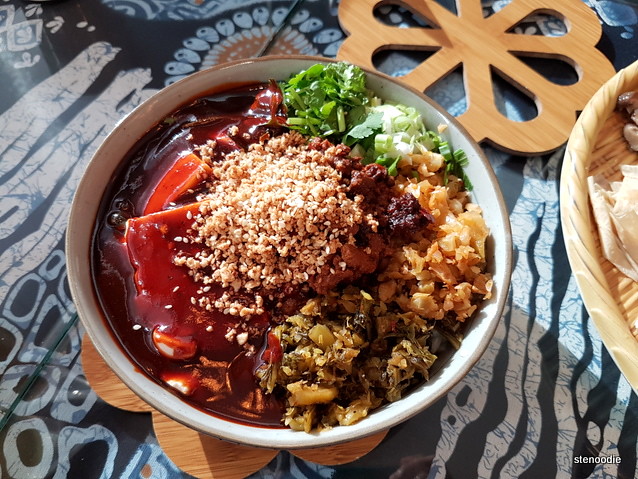 Then our first main noodle dish arrived.  It was the Tofu Rice Noodle with tofu, pickled, and minced pork that Bruce recommended.  He told us that this was a very popular choice among the younger crowd because it had bold flavours.  It was a beautifully assembled dish with a lot of toppings on it!

When we finally got around to trying it (because we were waiting for more food to come in order to take the photos together and also because Bruce kept talking to us, I didn’t feel comfortable starting to eat yet…), the noodles were very, very flavourful and indeed bold in flavours.  At certain times of the month, I crave for meaty and salty food and during such a time, I would definitely choose this to eat!  There were a lot of minced pork that was already heavily seasoned on top along with the pickles so that when you mixed it together with the dry noodles at the bottom, all the rice noodles got all of the sauce too.  I had never had tofu in my bowl of rice noodles before but this was a really good fit!  The big tofu chunks were incredibly silky soft! 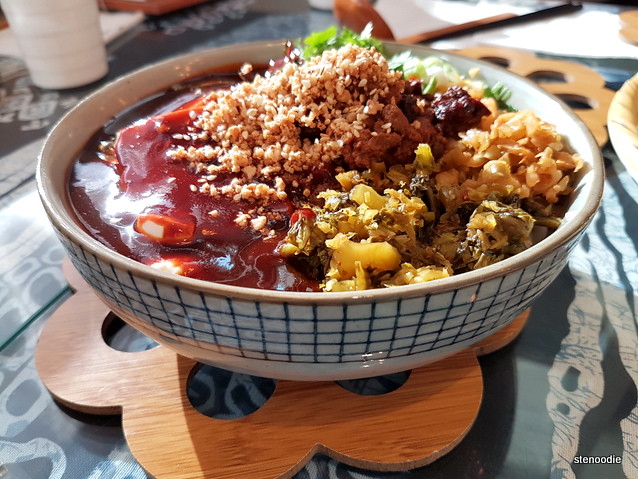 Wow, this is such a huge portion for one person!

After mixing it up and devouring it

Minnie ordered the DIY custom made CutePot Noodle where you could add any type of soup, two toppings, and noodles to create your own noodle bowl.  You can see that she has added a lot of wontons and beef into her bowl.

CutePot Noodle with wontons and beef 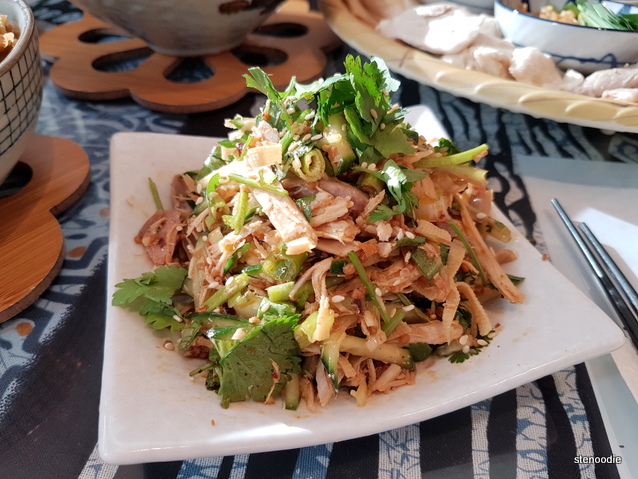 Next up, we had the appetizers arrive at our table.  The Chilled Shredded Chicken with Chinese vinegar, green onion, and tofu slices presented as a delicate mountain that looked so good!  I love shredded chicken in general and this one was strongly flavoured with the tofu slices characteristic of Yunnan tastes.  It was good but I did wish there were more shredded chicken in the pile.

The Cucumber Salad with Soy and Sesame Sauce was a great appetizer to break up the bold seasoning in the dishes that we had.  The chunks of cucumber were covered with a lot of shredded carrots and a soy and sesame sauce that appeared like peanut butter.  The sauce was a little overwhelming for me but overall because the cucumber was so fresh, it made for a very unique salad. 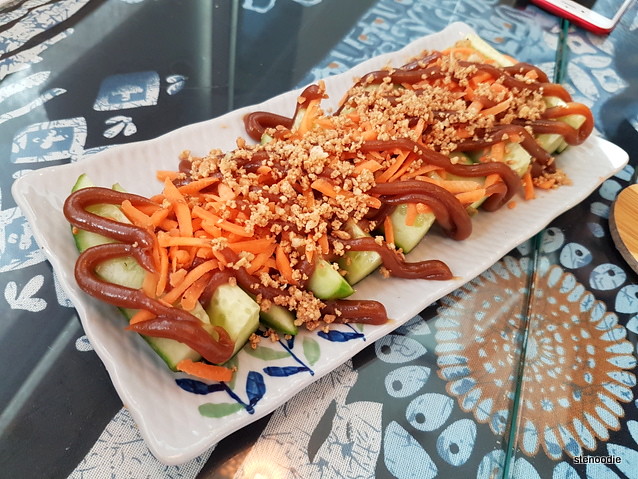 The Marinated Pork Hocks were very delicious.  I’ve had these before in other restaurants and this was made the way they should be; well seasoned and not too fatty. 🙂 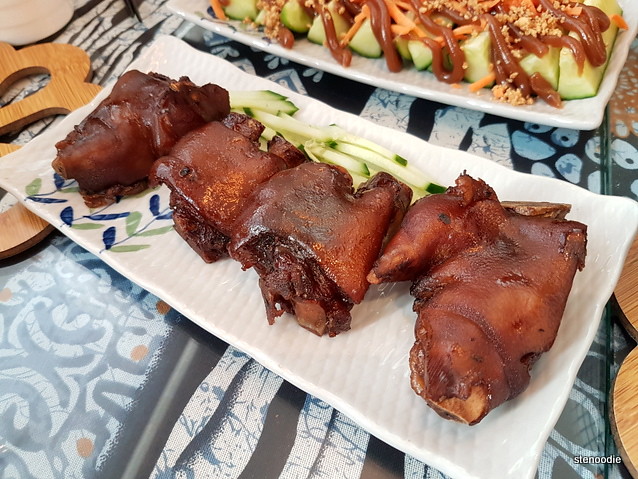 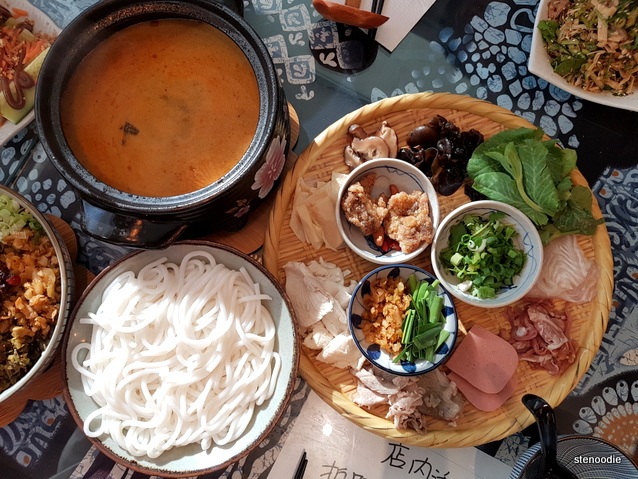 (I loved this traditional weave basket that the toppings came in!) 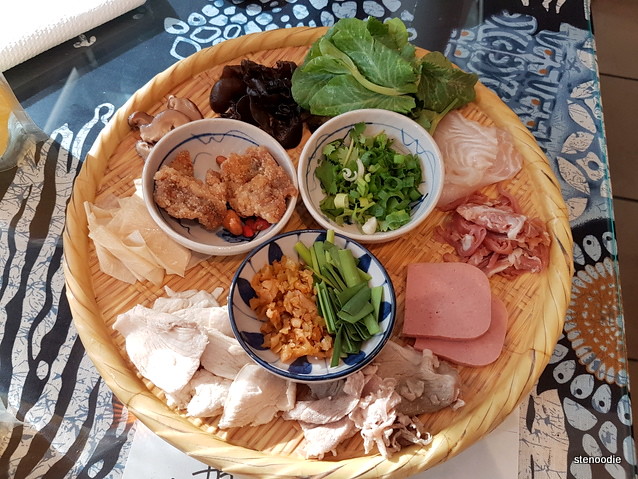 Toppings for the Origination Rice Noodle

If you know how traditional Yunnan rice noodles are served, you know that the rice noodles are first cooked and arrive in a plate separate from the uncooked toppings/ingredients.  Then, a really hot steaming bowl of soup is served in front of you and then one by one, you add the ingredients in quickly into the pot.  The noodles are then added last.  When it came to completing this process of the Yunnan rice noodles, they let us photograph the bowls of food first and then because we took longer than was necessary, Bruce actually took the soup back into the kitchen and returned with one that was hotter for us in order to retain the original experience.  (If the soup was left out for too long due to photography, then the ingredients and noodles would be subpar due to lowered temperatures.)  Unlike some restaurants who leave you to do the process yourself, Bruce did this for us (which I liked). 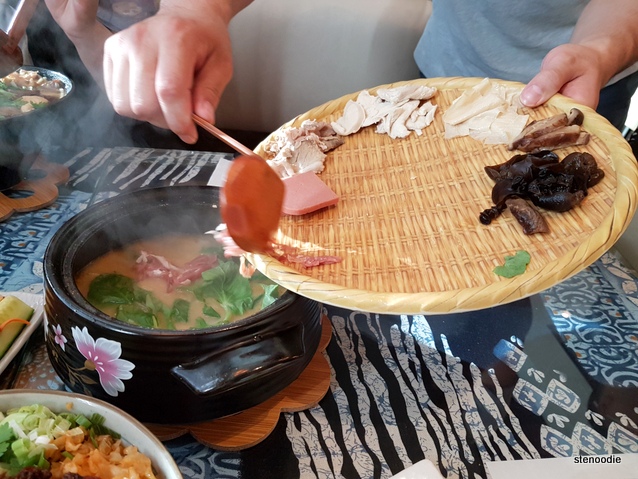 Pour in all the toppings first into the steaming soup broth 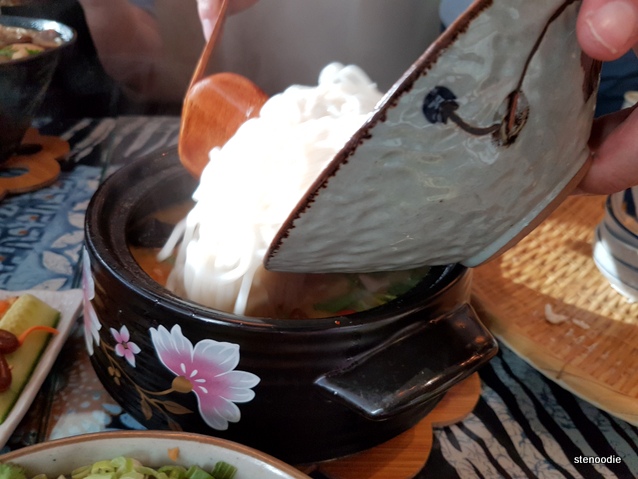 Pour in the rice noodles next 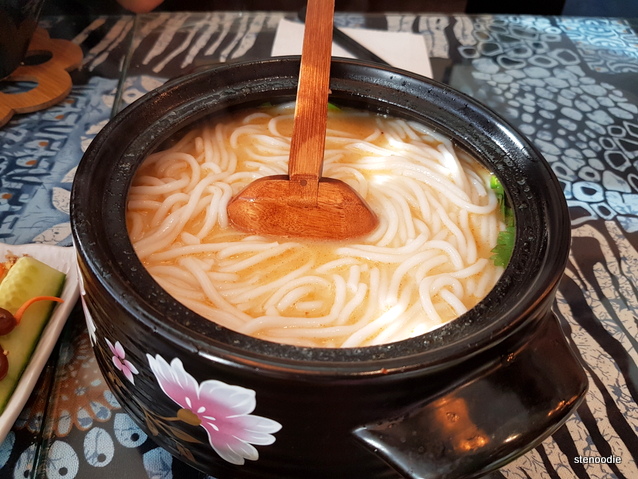 Wait 30 seconds and then you can eat!

Anyway, once this was all done and it came to eating the bowl of Yunnan rice noodles finally, the noodles were soft and as Tony put it, actually “fully cooked”.  I enjoyed the Tom Yum Goong broth and didn’t find it too spicy at all.  The ingredients might have been left in there for too long because I thought that the chicken was a bit rough.

It was a huge portion!  I believe that if I ordered that for myself, I wouldn’t have finished it.  Minnie also informed me that customers can actually refill the rice noodles on an unlimited basis!  (Some customers even refill the noodles and then take the rest home as leftovers.) 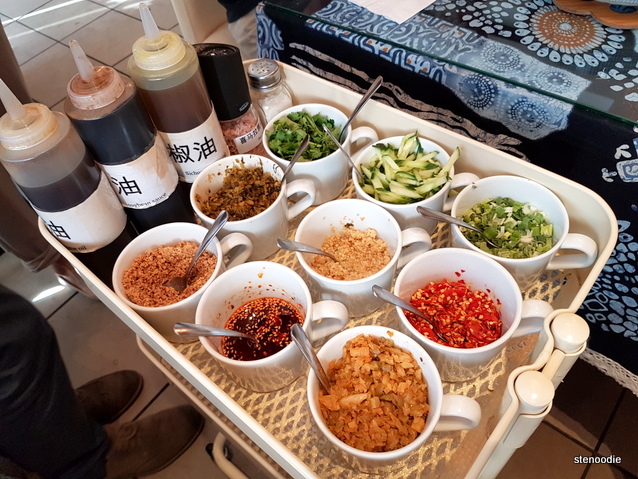 Nat and Tony were nice enough to share one of their extra noodle dishes with us too to try.  This was the Yunnan Style Fried Rice Noodle with Pork.  This was definitely a very good tasting fried rice noodle dish and I was able to see why they recommended it to us to try. 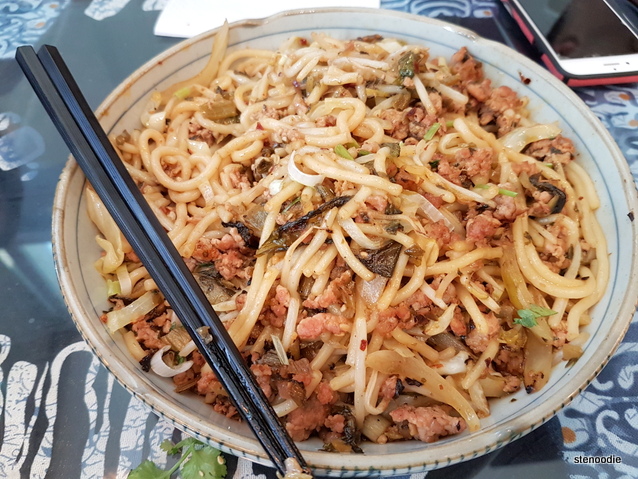 Very last but not least, we were able to try their in-house desserts as well.  We tried the Stewed Lotus Seed & White Fungus.  At first, my mom and I were planning to share one portion as one bowl was more than enough for us to try it out (my mom was also very full at this point).  However, after Minnie took a sip of her portion of this dessert and realized it was too sweet, she gave me her entire portion too.  Thus, my mom and I each had one bowl to ourselves. …

This Stewed Lotus Seed & White Fungus dessert is such a traditional Chinese dessert and so nourishing for anyone that eats it.  It was full of white fungus that was thoroughly melted and the dessert smelled and tasted richly of rose as well.  I loved the little ceramic bowl that it came in.  After a while though, it was a little too sweet.  This is a great dessert to share. 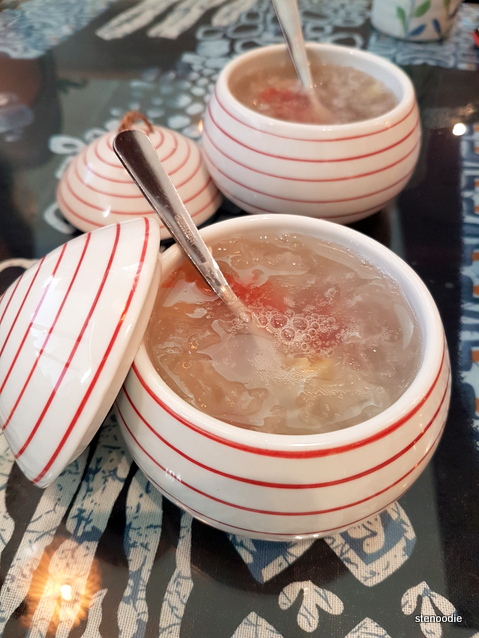 It was packed with so many ingredients! 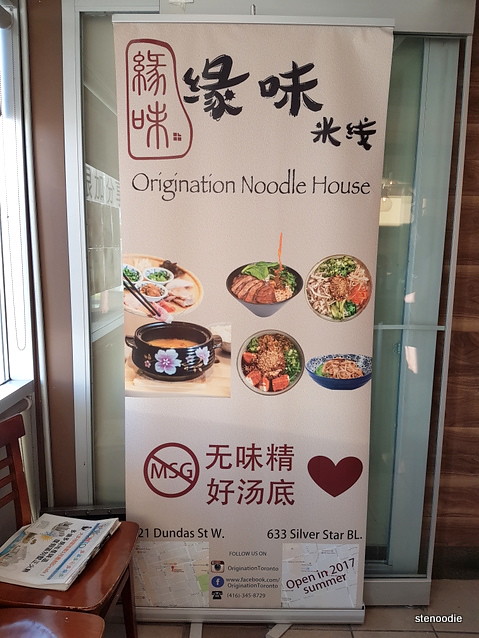 All in all, it was a very generous and marvellous tasting at Origination Noodle House.  I have to thank Sweven Media for inviting me to this new Yunnan rice noodle house to try out their food.  For future tastings, I hope that the co-owners will speak to us after the meal to ask for our feedback and comments instead of sitting in front of us during the whole meal.  I felt very self-conscious and unable to properly enjoy my food thoroughly because I felt the need to socialize and give feedback.  It actually made for an awkward situation for me during the entire meal.  I’ve never had the restaurant owners just sit in front of me during a tasting before and expect conversation (as least that’s what it felt like to me).  Otherwise though, looking back, the food at Origination Noodle House was thoroughly authentic of the Yunnan flavours and culture.  Clover and Bruce really show their passion through their care and commitment towards building their restaurant empire.  I wish them all the best! 🙂 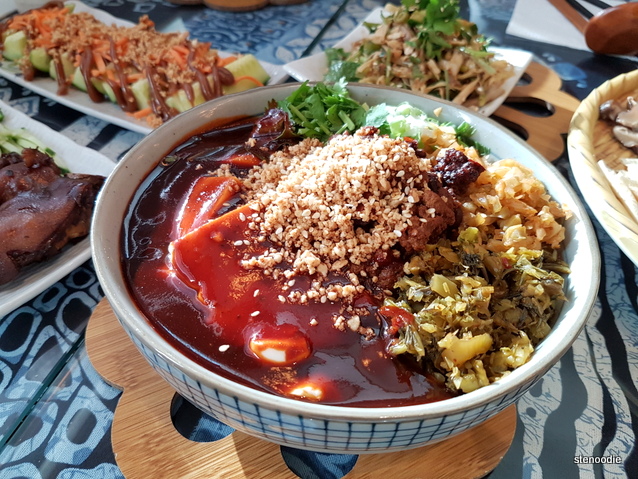 Such a wonderful meal! 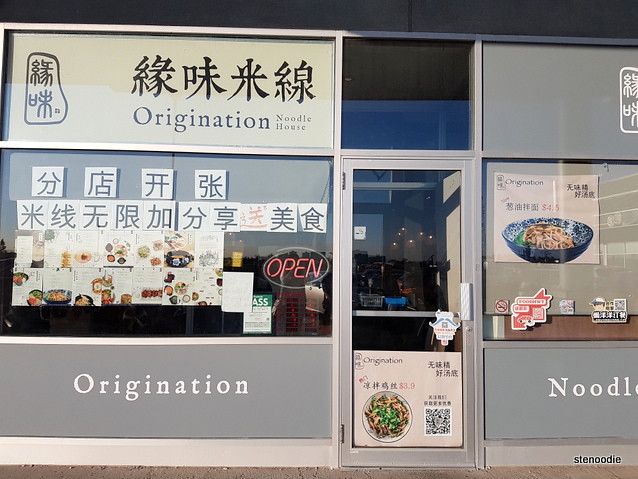 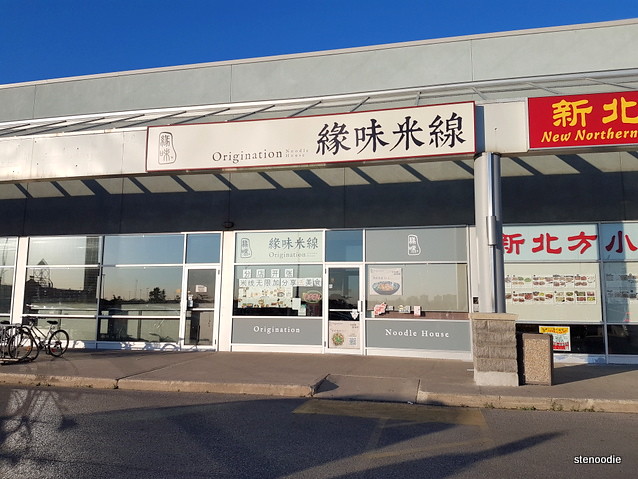 (I don’t think any of Clover, Bruce, or Minnie realized or were aware that it was a potentially awkward situation for us to dine like that.  It seemed that the co-owners were very, again, intent on observing their clients eat and to receive feedback.  I can only assume though.) 🙂

FTC Disclaimer:  Although Sweven Media reached out and invited me to a complimentary tasting at Origination Noodle, the opinions expressed here represent my own and not those of the companies.