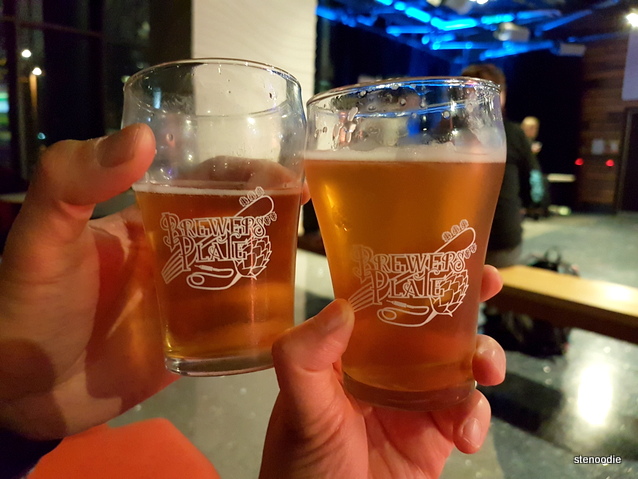 May 4, 2017:  Brewers Plate is a rock and roll themed event that celebrates local restaurants, chefs, and brewers by offering an unlimited food and beer sampling experience while raising money for a great cause — War Child Canada.  War Child Canada helps children in war-affected communities reclaim their childhood through access to education, opportunity, and justice.  War Child takes an active role in raising public awareness around the impact of war on communities and the shared responsibility to act.  You can visit warchild.ca to learn more.

This was my first time attending Brewers Plate (apparently, this was their 10th anniversary!).  I attended as a media guest and brought a plus one with me too.  The event was from 6 to 11 p.m.  Since the event was on for so long during the evening, Ken and I actually didn’t arrive until 8 p.m. since he was finishing some tasks at work first.  This turned out to be a very rainy and windy night.  The walk to the Corus Quay Building left us a little rain-soaked!  XD 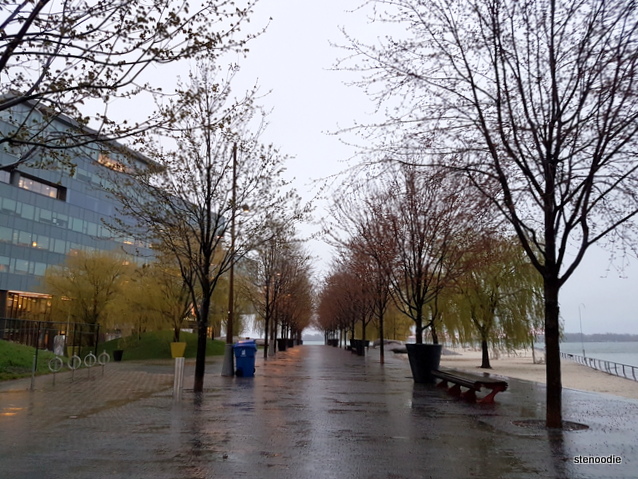 This was also my first time to the Corus Quay Building which was right beside the Toronto Harbourfront.  It was too bad that it was raining so much that evening otherwise I’m sure we could have taken advantage of some patio weather too.  There were a lot of people inside already when we arrived. 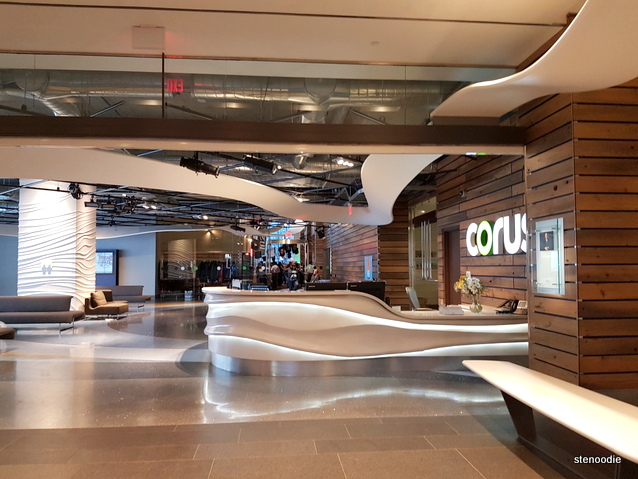 We checked in with the hostesses who were manning the check-in table and also received our drink glasses for the night.  This was like the Food & Wine Expo where we received a souvenir drinks glass for the beer we would be trying out that night.  I liked that there was a free coat check for us too! 😀 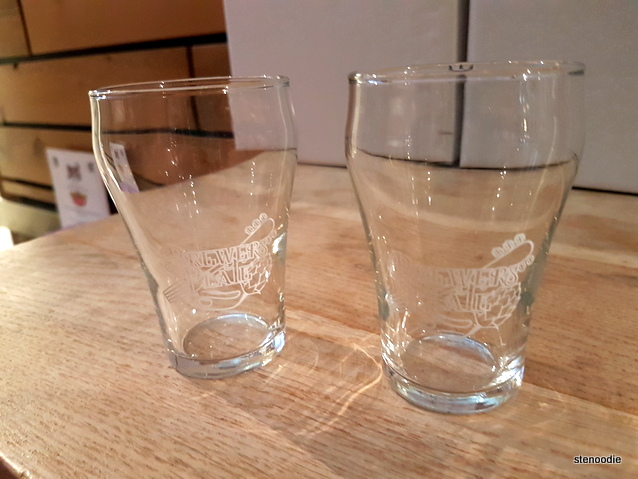 Brewers Plate glasses for the drinks ahead

We were hungry so we immediately scoped out the free food.  It was an unlimited food and drink event so I was quite looking forward to seeing what was available. 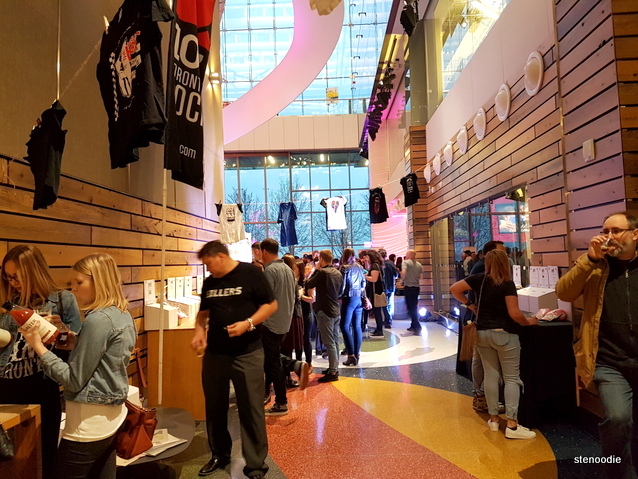 So many people were there! 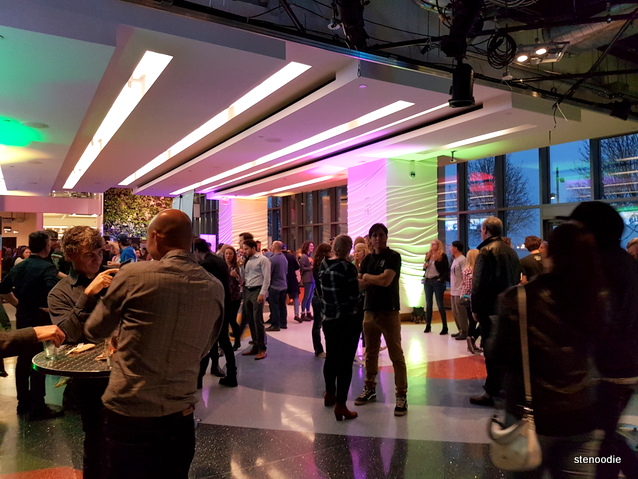 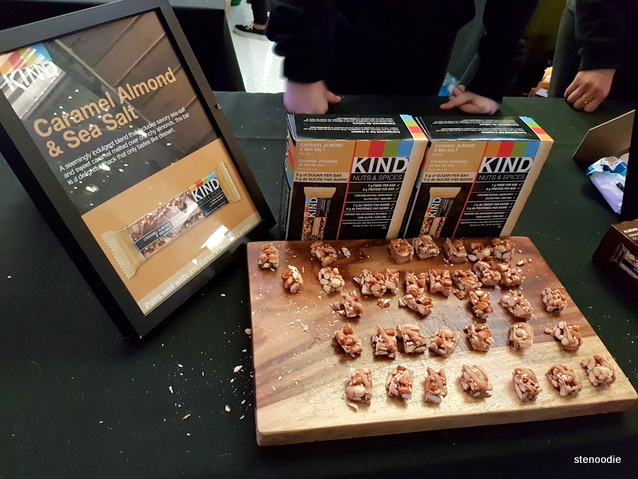 First, we nabbed a Caramel Almond & Sea Salt bite from the KIND granola bars.  I quickly realized that although the event was slated to last until 11 p.m., by arriving after 8 p.m., a lot of the vendors were finishing up their samples (Nooooo).  By the end of the night though, we still accumulated a good amount of food sampling (there were drinks all night long; no worries about the drinks running out at all lol) but I do think that if we arrived earlier, we would have tried more food. 😀

I tried a raspberry macaron from Le Dolci but I’m not sure why the lady there didn’t give Ken a macaron too after I got mine.  XD. 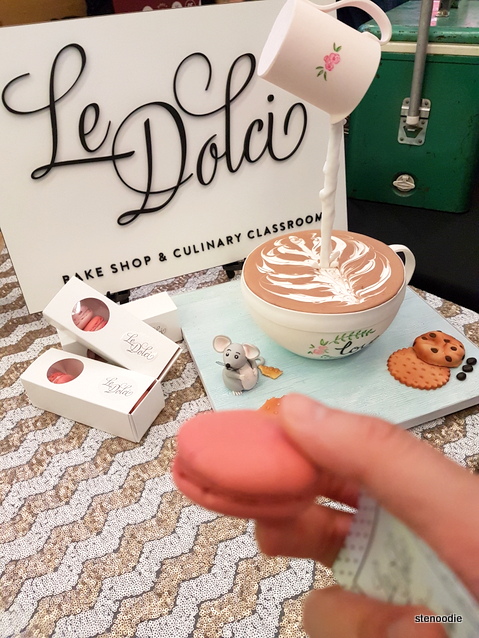 We had a meatball focaccia sandwich that was quite good.  The meatball was yummy.  We went back for seconds too since they still were serving some. 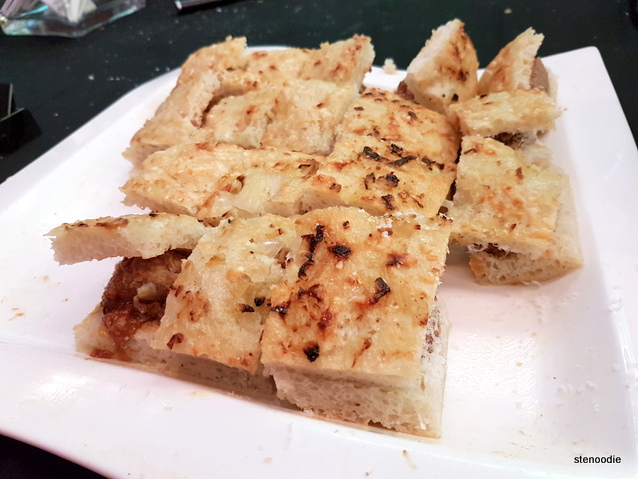 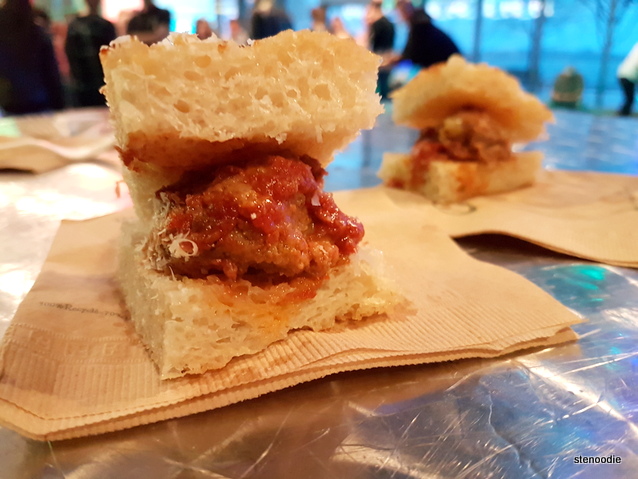 Our first drink of the night was the beer from Collingwood Brewery which I have enjoyed before. 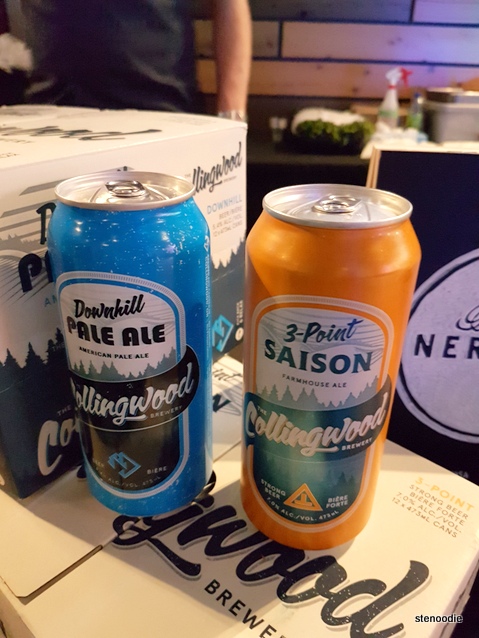 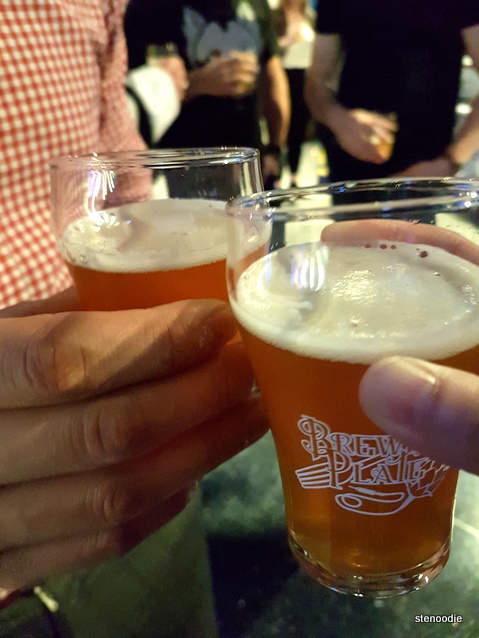 Cheers! Our first drink of the night

As we were lining up, the cheese spread samples ran out as we got to the front of the line.  Boo.  Fortunately, we tried the meatball on a crostini though from Ted’s World Famous BBQ as we watched it being cooked in front of us.  It was good. 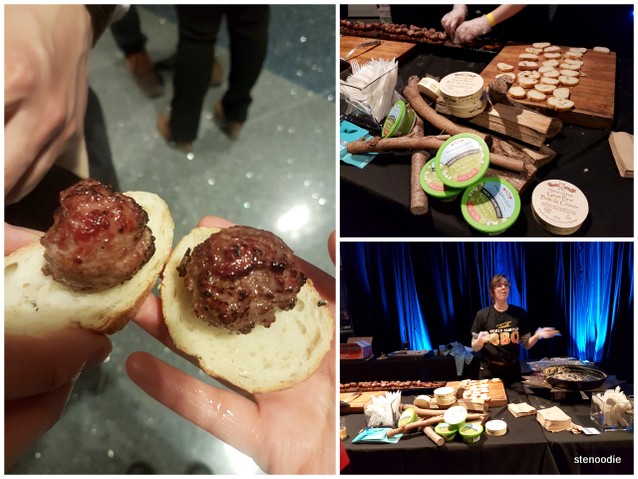 Mmeatball on a crostini from Ted’s World Famous BBQ

Some Brickworks Cider (I’ve also had this before). 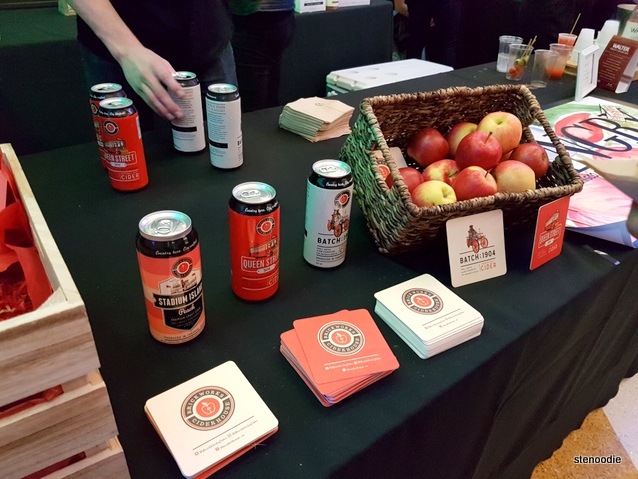 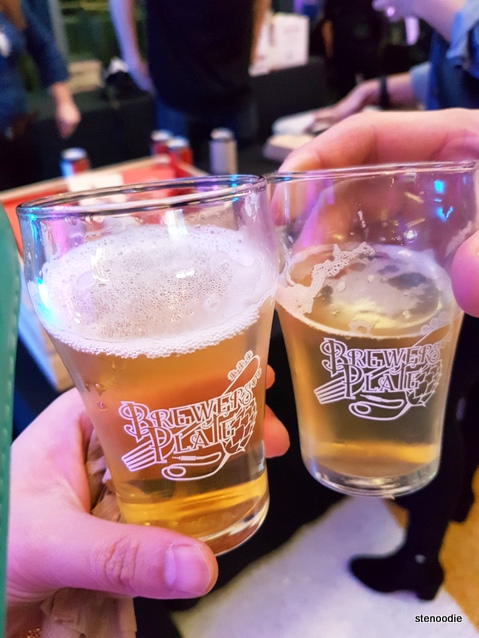 As we headed towards the other side of the room where there was a large green floor-to-ceiling wall, there was more food there.  We got a plate of sliced sausage with crostini and salad. 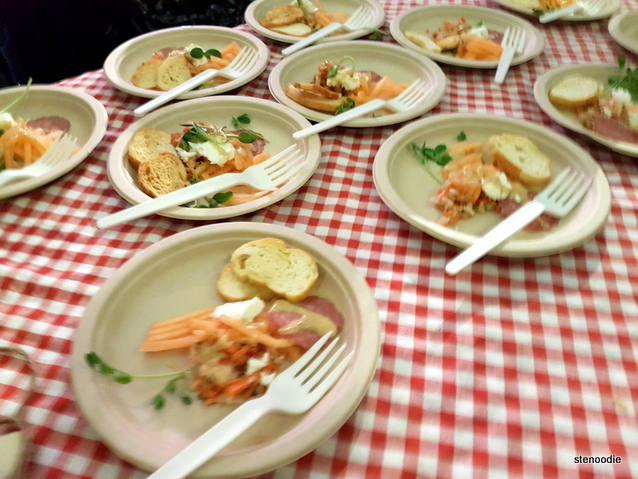 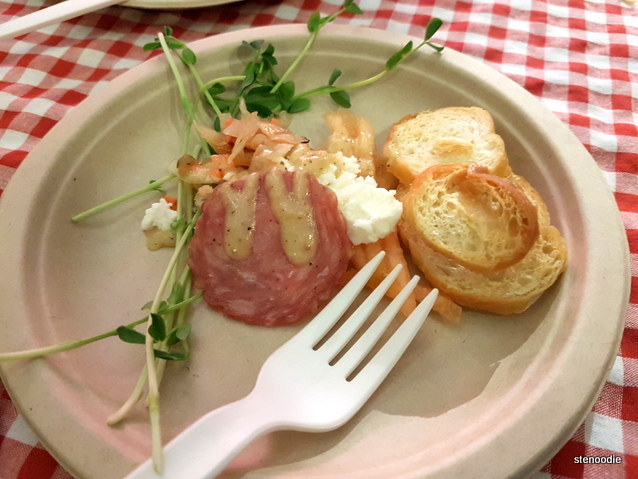 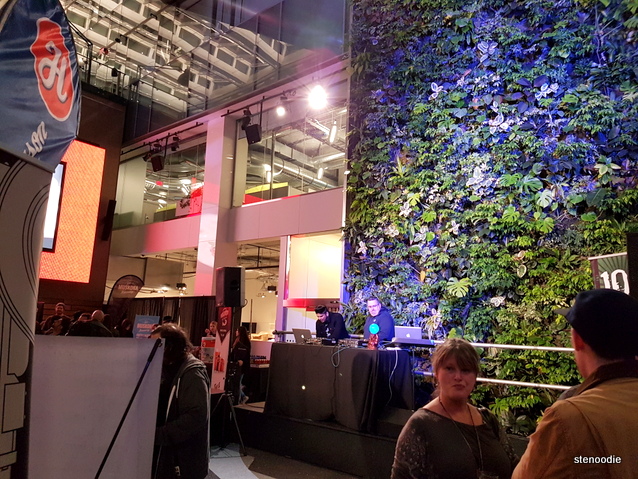 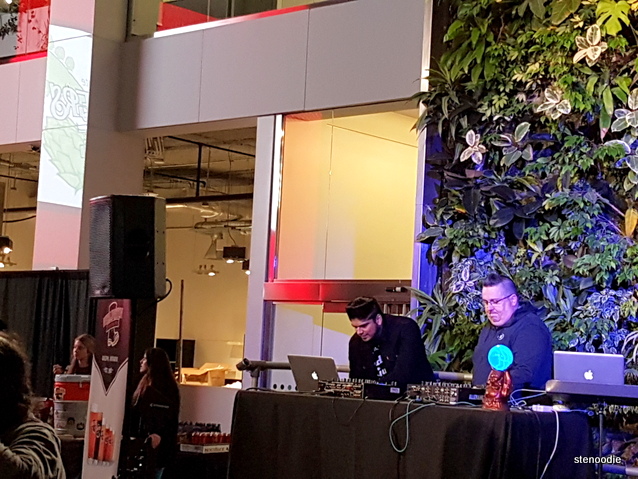 Heirloom Toronto served up some dessert, a Whipped Goat Cheese Cheesecake, that was available in three flavours and incredibly delicious!  This was very unique too to have goat cheese in a cheesecake.  The three flavours were Woolwich dairy goat cheese, Wild blueberry preserve, and Brown sugar caramel. 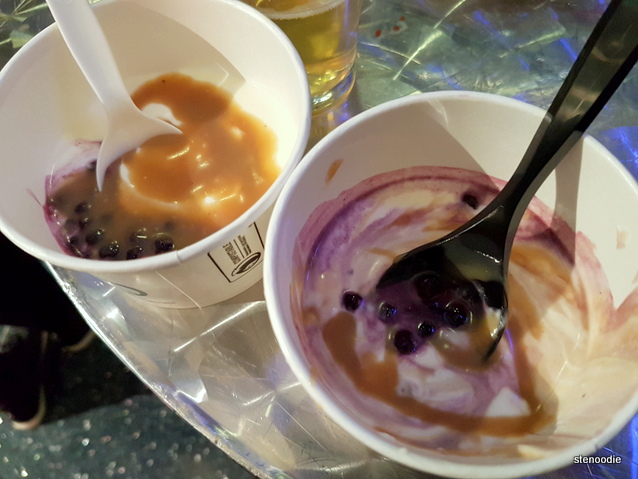 We also tried the Hunter’s Terrine from Globe Bistro.  The terrine was made with elk, beef, and pork with wilk leek aioli and pickled mustard seed.  This was quite good and substantial! 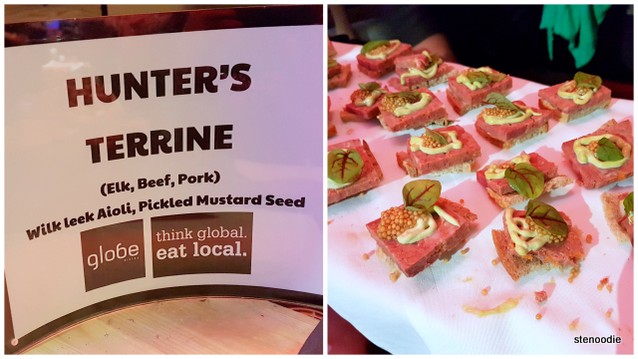 We tried the Vanilla Sea Salt Artisanal Dark Chocolate too from Chocosol. 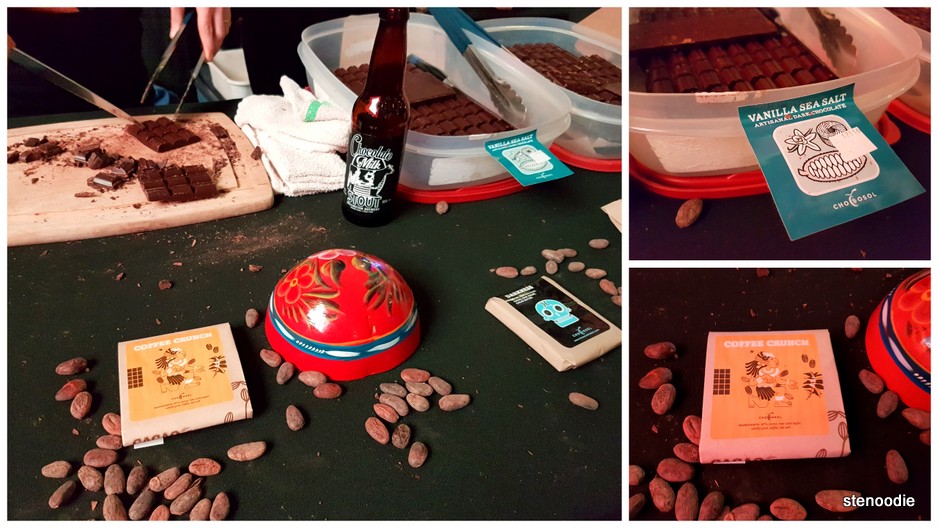 We had some cheese from Cheese Boutique.  They had a lot of cheese on their board for sampling!  Gouda and old cheddar :). 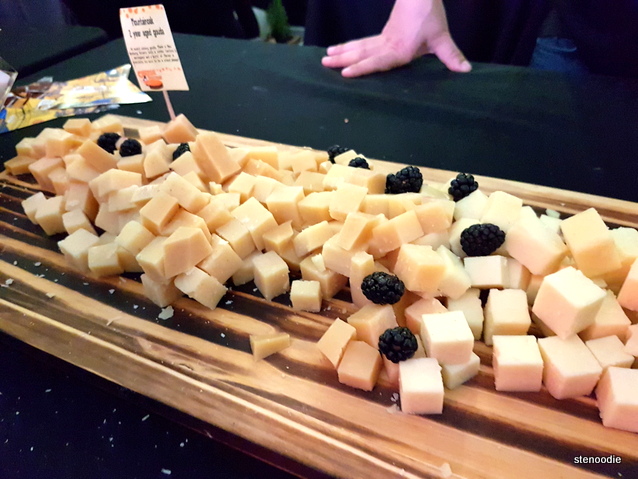 The vendor for Old Tomorrow Beer served up some apple compressed in mini goat cheese cones and topped with Caledon Hills wildflower honey too.  It was interesting. 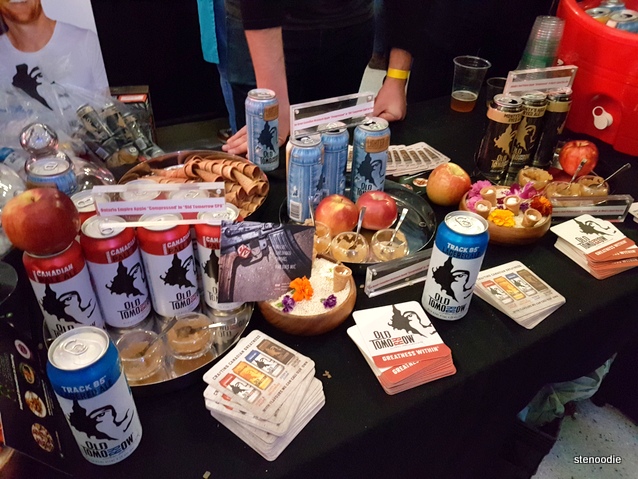 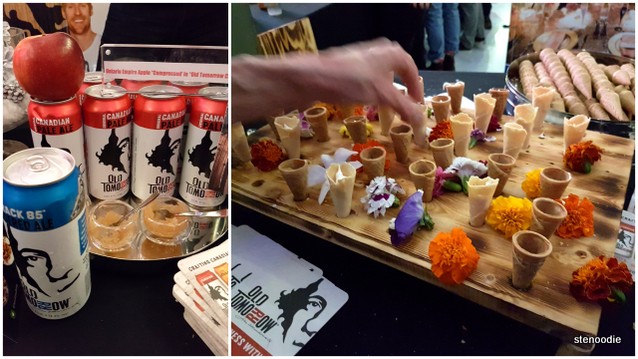 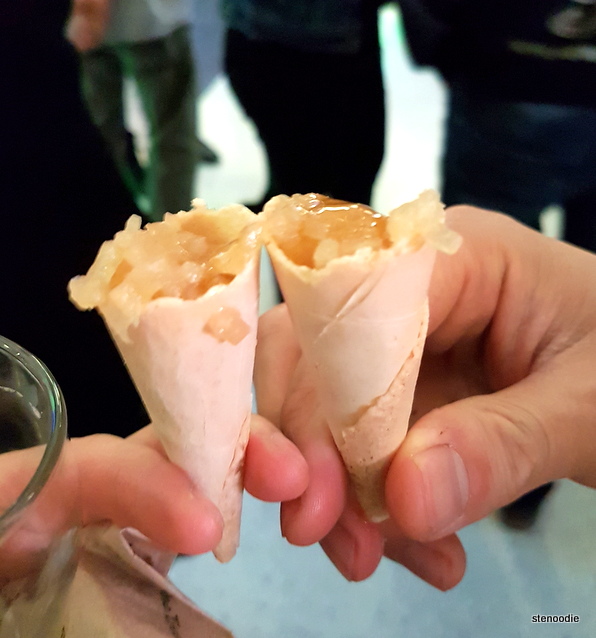 We got another drink at the MacKinnon Brothers Brewing Co. 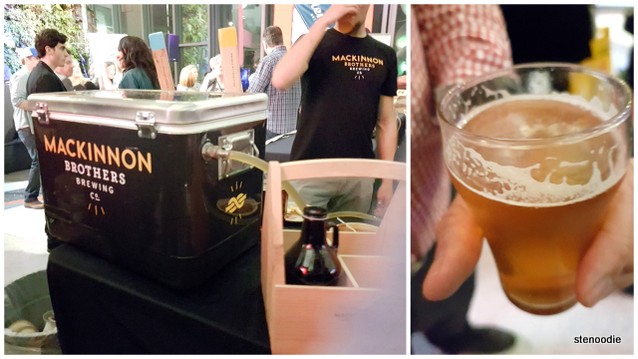 Last cheers for the night 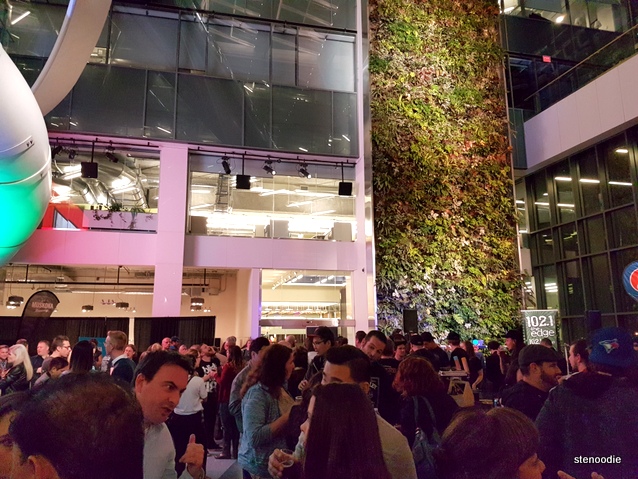 Everyone drinking and eating

It was close to 10 p.m. and we were getting tired so we left after taking a photo in front of their media wall.  There were still a lot of people at the event at this time.  I couldn’t believe how many people there were!  Considering that the price of one early bird general admission ticket was $80 with taxes and fees, I would have expected much more food in bigger portions available.  I’m glad that we were able to try out the food as media guests but more portions of food is never a bad idea.  I also understand that the $80 goes to support the War Child Canada cause.  However, I’m not sure if I would return to the event next year if there were so few selections of food.  I guess we’ll see…

FTC Disclaimer:  Although Brewers Plate reached out and invited me to the event as a media guest, the opinions expressed here represent my own and not those of the organization.

1 Response to Recap of Brewers Plate 2017