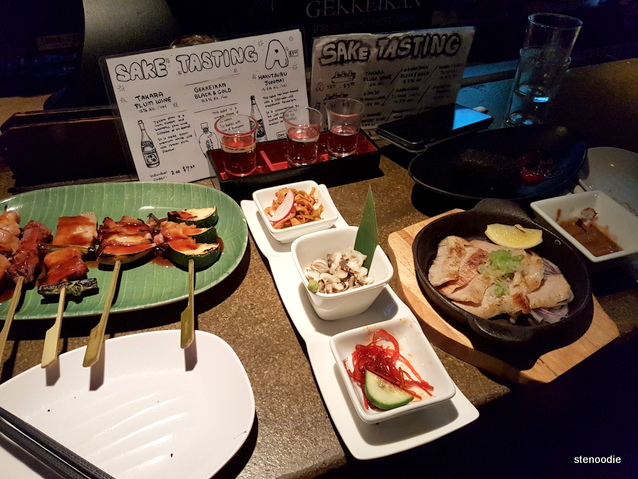 May 6, 2017:  After a brief stint at the Leslieville Food & Drink Festival, we went to Don Don Izakaya for dinner.  I had previously been to Don Don Izakaya many years before.  In fact, it was one of the very first izakayas I had been to in Toronto.  This was my pre-blogging days and even before many other Japanese izakayas had opened up in Toronto.  I had dined here with a friend and remembered the visit fondly because the food was quite good!

Don Don Izakaya is located on the second level building at Bay and Dundas in the heart of the downtown core.  There was an elevator for those who need it as well.  They serve Japanese tapas. 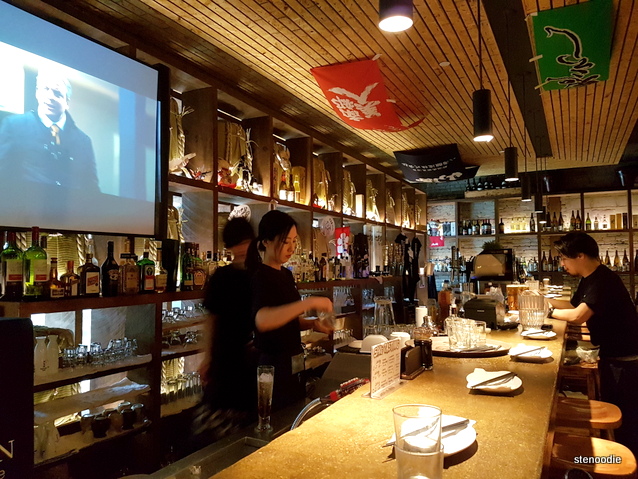 The bar at Don Don Izakaya

When we entered, the staffed greeted us with loud and enthusiastic Japanese greetings.  It was just before 7 p.m. on a Saturday and the restaurant wasn’t full yet.  The hostess led us to sit at the bar in front of the TV where all of the sake and alcohol was.  I preferred to sit at the communal tables to have a better experience (to watch the chefs make the food in the middle of the room); I wasn’t interested in sitting at the bar (I only like sitting at the bar if it’s in front of an open kitchen where there’s something to watch).  However, the hostess said that those communal tables were reserved for parties greater than two people.  Hmm…  I remember being a bit annoyed at this because there were clearly spaces at the communal tables and also I remember sitting there when I was there last time and we were only a party of two too.  Anyway, this isn’t a big deal looking back but I remember at the time being slightly annoyed to have to sit at the bar when I saw empty seats at the tables.  (You can see a party of three sitting at the table in the photo below.  How big of a difference is two people versus three people for them to get a seat at the table and we weren’t able to?) 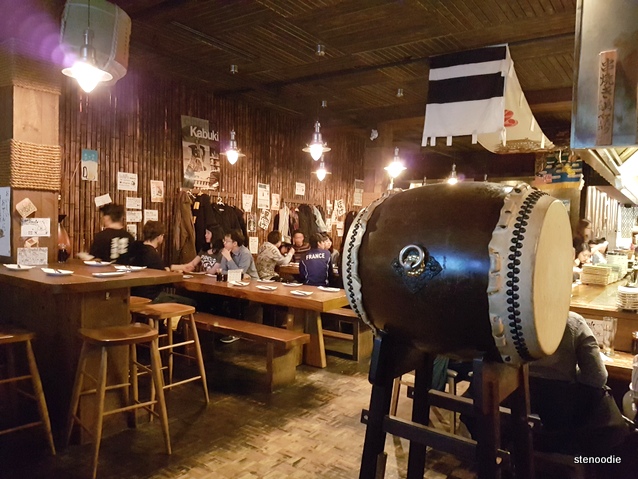 Communal tables in the middle of the room

The sake tasting seemed very interesting to me so we got the A set.  We ordered the DONDON Special Black Croquette, Torched Mackerel, 5 Skewers Combo, Shiokara, Teppan Grilled Fatty Pork, and the Three Seafood Appetizer Set. 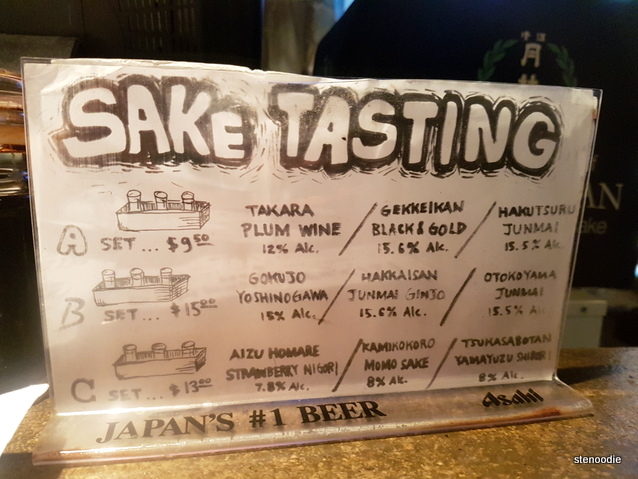 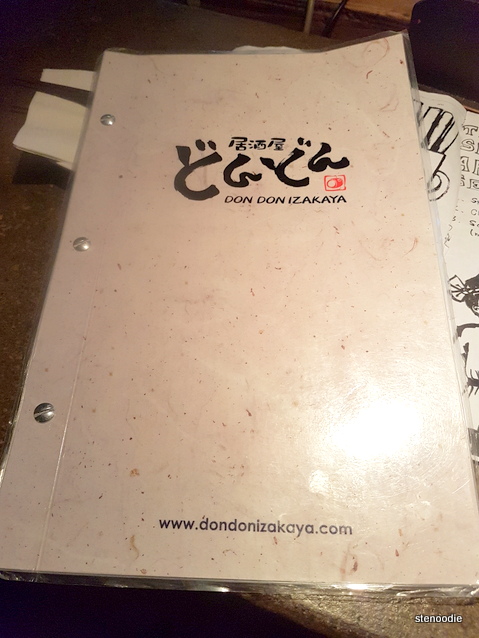 Their menu was very extensive with a lot of tapas! 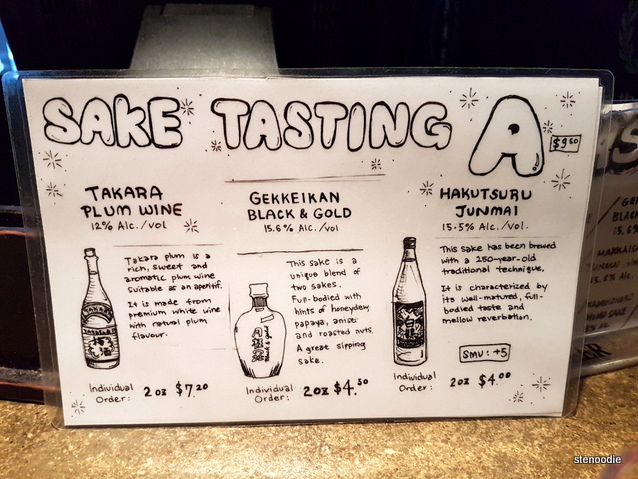 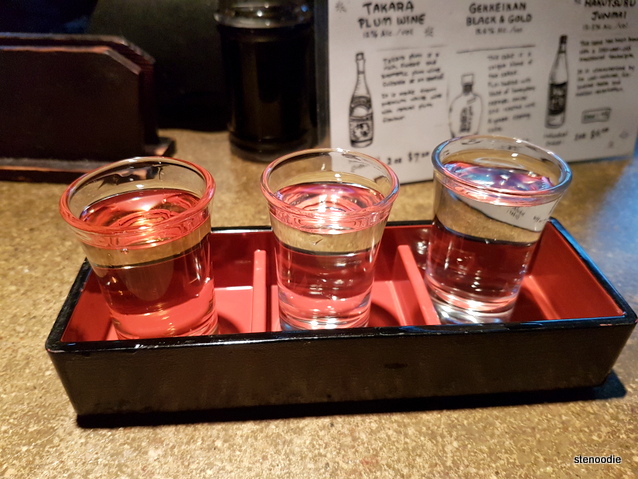 The DONDON Special Black Croquette was made with breadcrumbs, shrimp, and mayonnaise.  It tasted cheesy to me and it was fairly good. 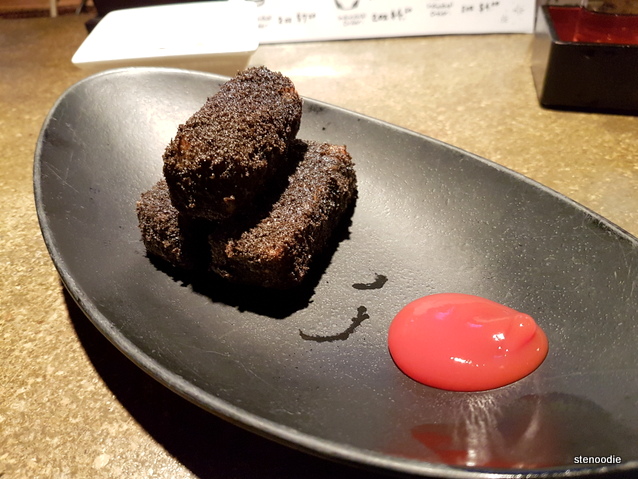 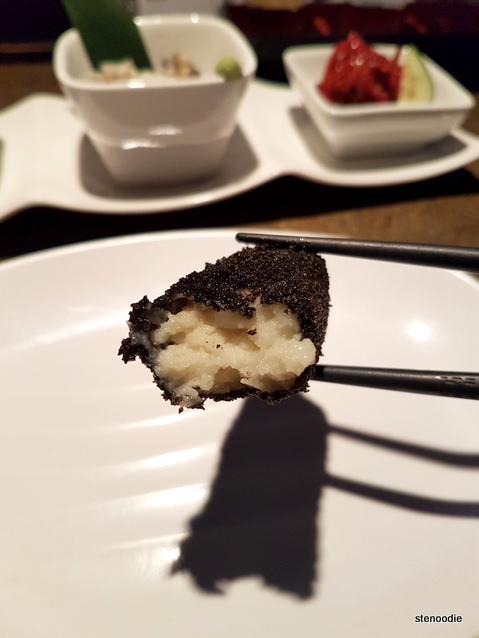 The inside of the DONDON Special Black Croquette

The Shiokara was salted squid “guts”.  It was a really small dish.  It was definitely salty and not something that everyone would enjoy eating due to its distinctive fishy taste.  It was very chewy. 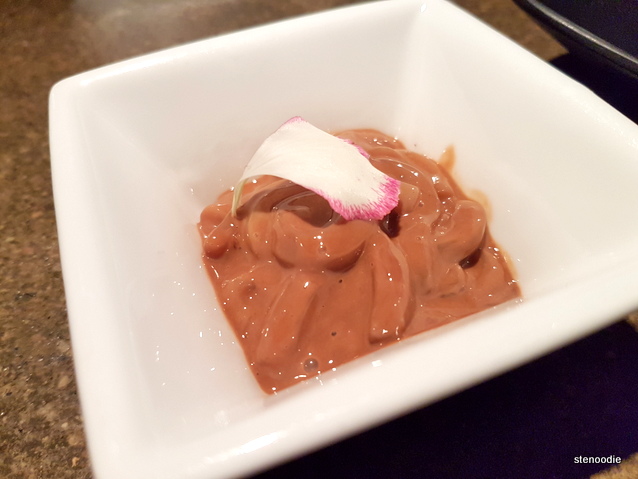 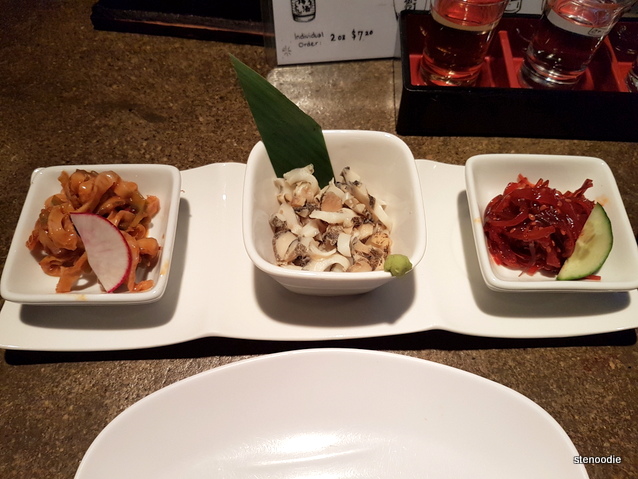 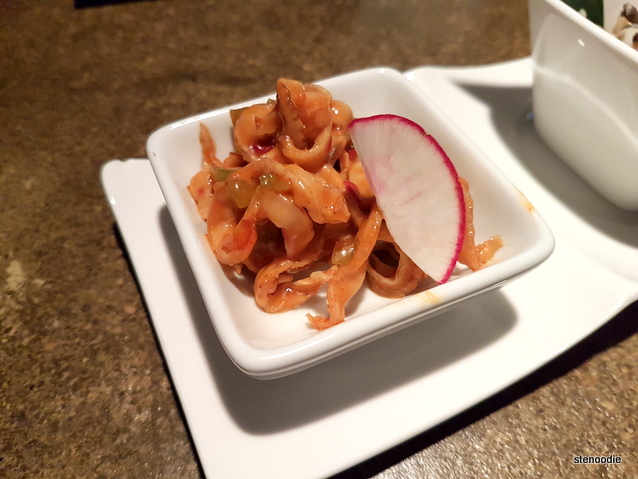 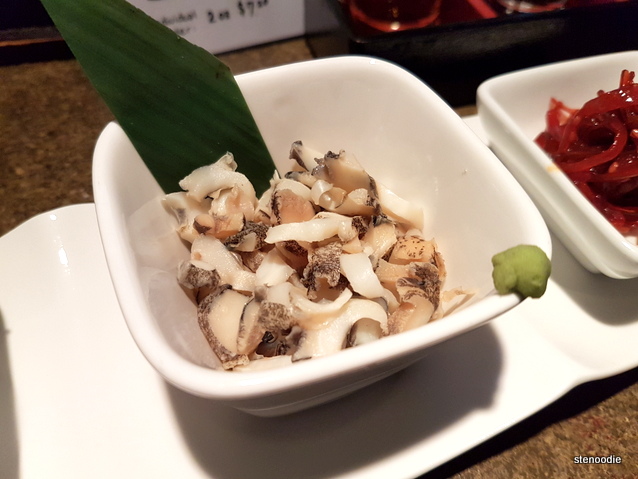 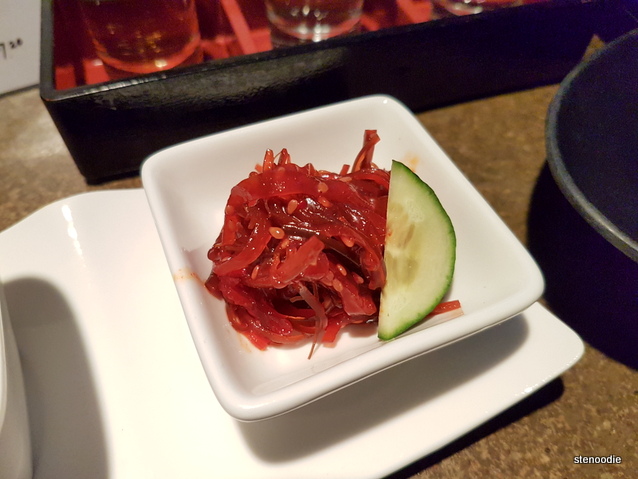 The Torched Mackerel was actually torched table-side.  We watched the torch action happen.  This was a substantial dish where there were a lot of slices of mackerel on the plate!  The mackerel was quite good.  I especially liked the daikon that was on the side. 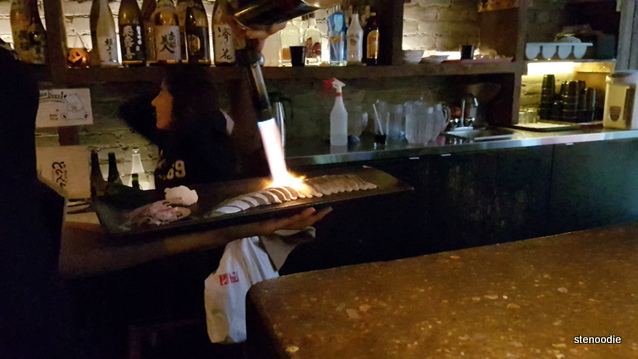 Watching it being torched next to our table 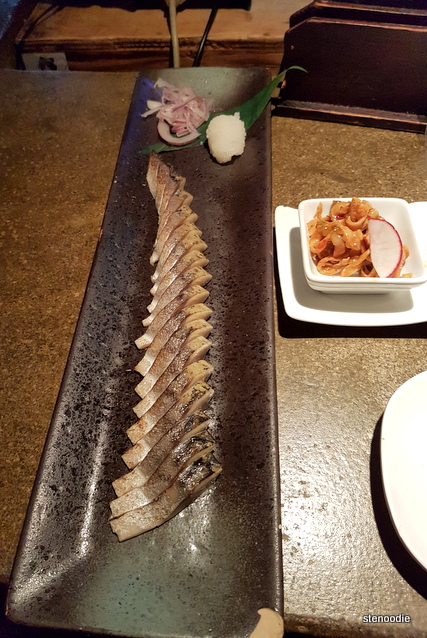 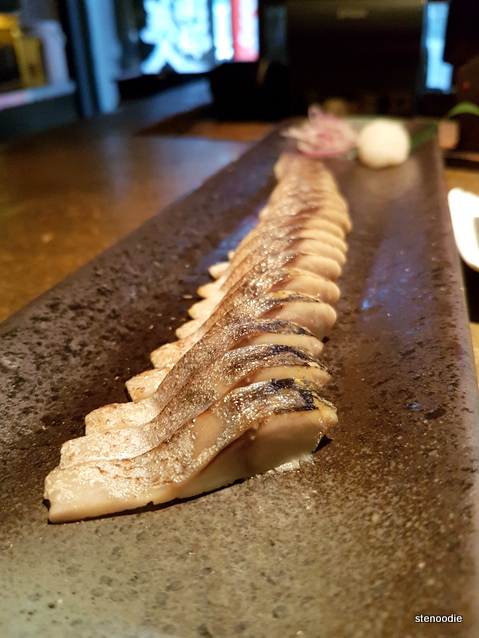 It looked so nice!

I think my favourite dish that night was the Teppan Grilled Fatty Pork.  The fatty pork pieces were served with yuzu and chili pepper paste.  The pieces were very firm and tender! 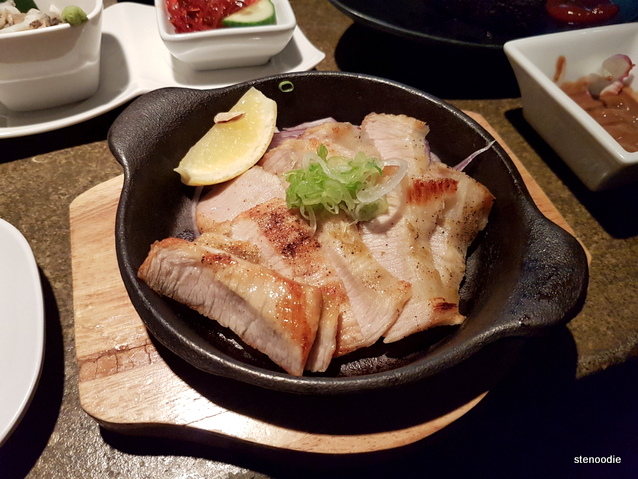 Last but not least, we had the 5 Skewers Combo.  This had chicken thigh, angus beef, pork green onion, zucchini bacon, and oyster-mushroom bacon.  This was quite good and I remember enjoying the vegetables between the skewer meats too. 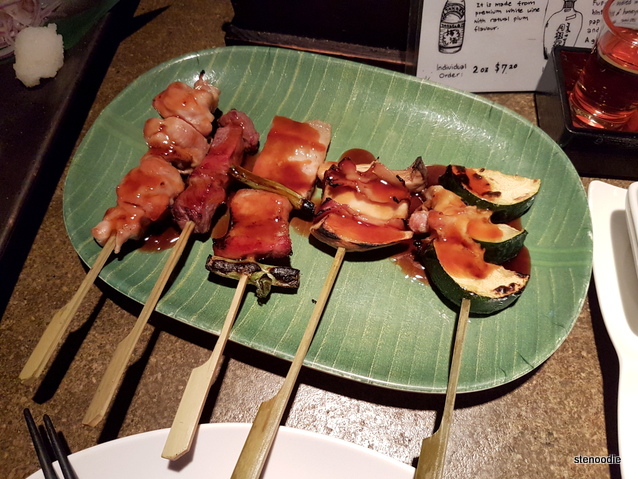 While some of the latter items that we were ordered were good, I still had fonder memories of my first visit to Don Don Izakaya.  I think we ordered more filling dishes the first time I was there and the service was a little better too when dining at the communal tables.

A day later, we realized that we actually left behind our Leslieville drink glasses at the bar of the restaurant.  I reached out to them via Instagram and asked them about the forgotten glasses.  They informed me that they would keep it for me.  I returned a few days later to pick them up.  I’m glad that they were prompt about that. 🙂