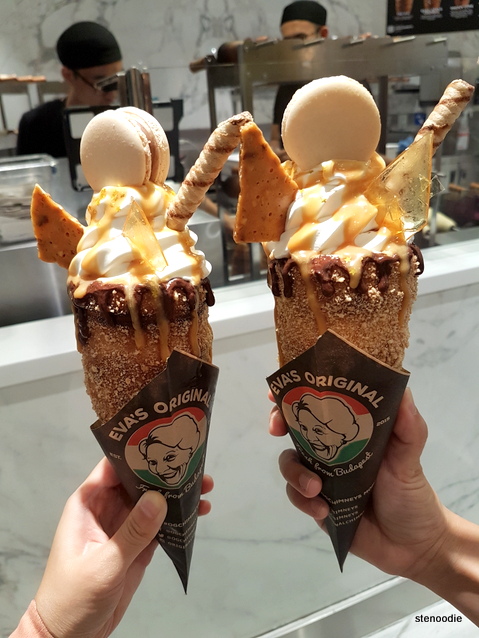 Back in June, I had won a contest from @tastetoronto on Instagram for a free Decadent Drip Cake Cone from Eva’s Original Chimneys (at Pusateri’s Sak’s Food Hall in the Toronto Eaton Centre).  I had completely forgotten about this until Priscilla messaged me last week asking if I wanted to redeem the prize with her (she had coincidentally won the contest too).  It was the perfect opportunity for us to go there together to claim it!

Thus, we went yesterday (a day before the offer would close on August 31) to claim our Decadent Drip Cake Cones.

Pusateri’s Sak’s Food Hall in the Toronto Eaton Centre was only being held until August 31, 2017 and Eva’s Original Chimneys was one of the vendors there.

While looking for the food hall, there were signs all around Sak’s Fifth Avenue promoting their special cone. 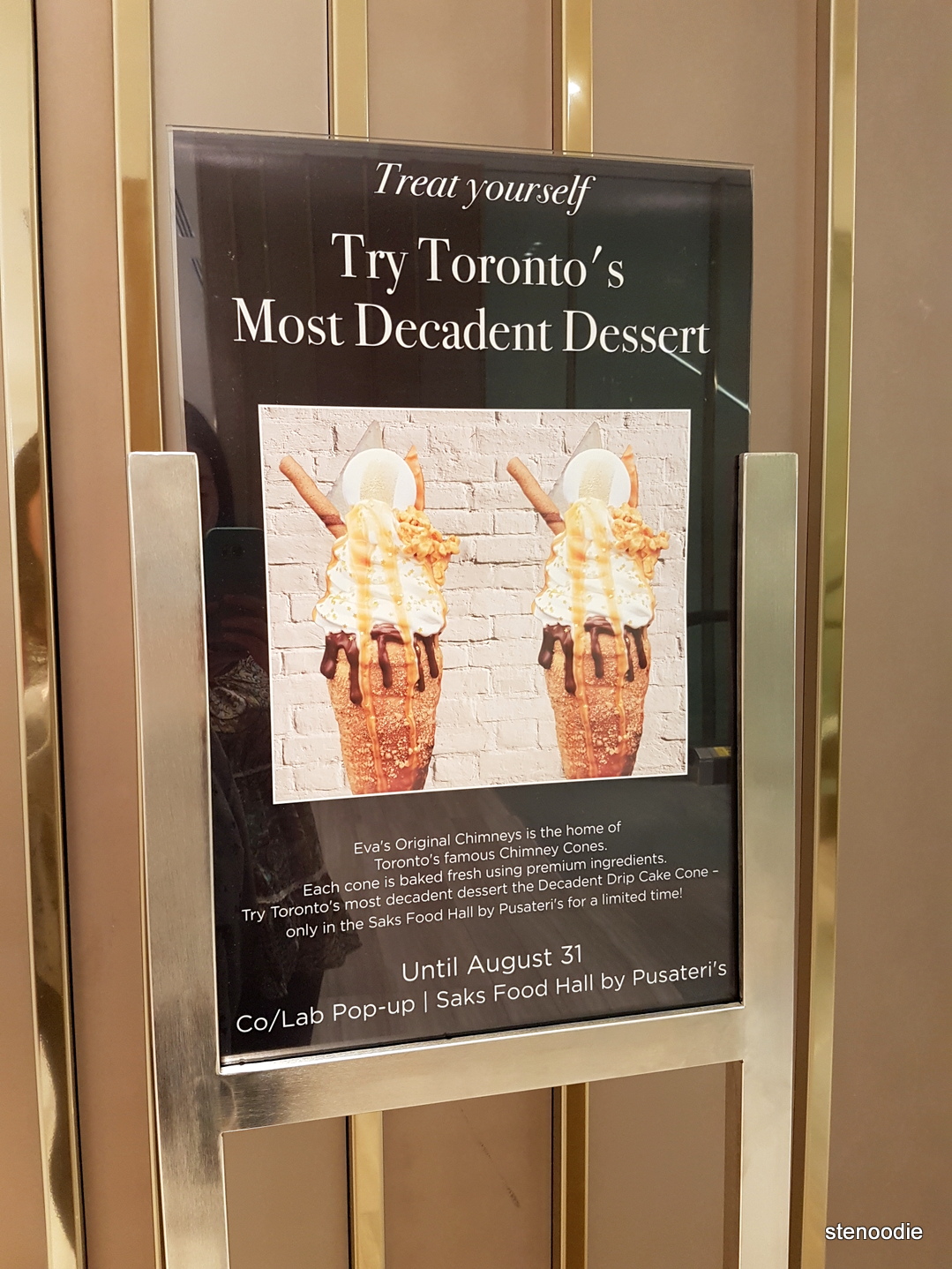 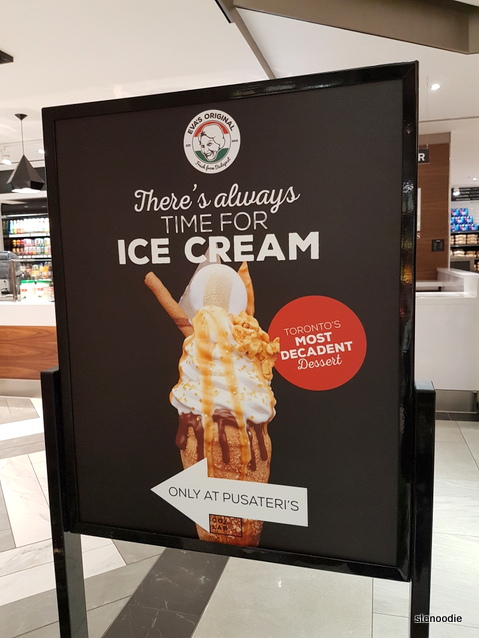 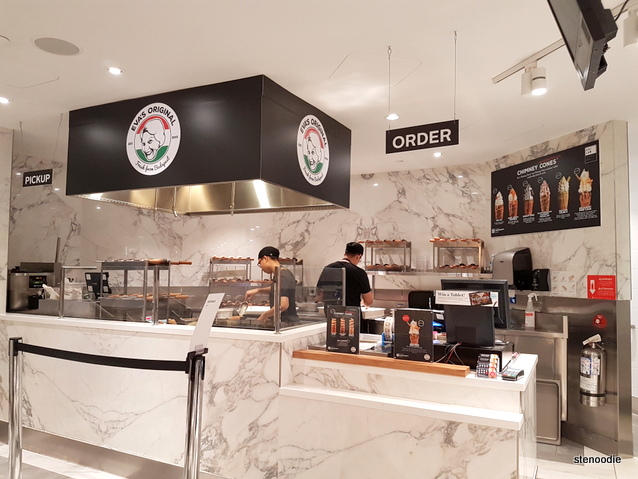 The pop-up shop at Pusateri’s 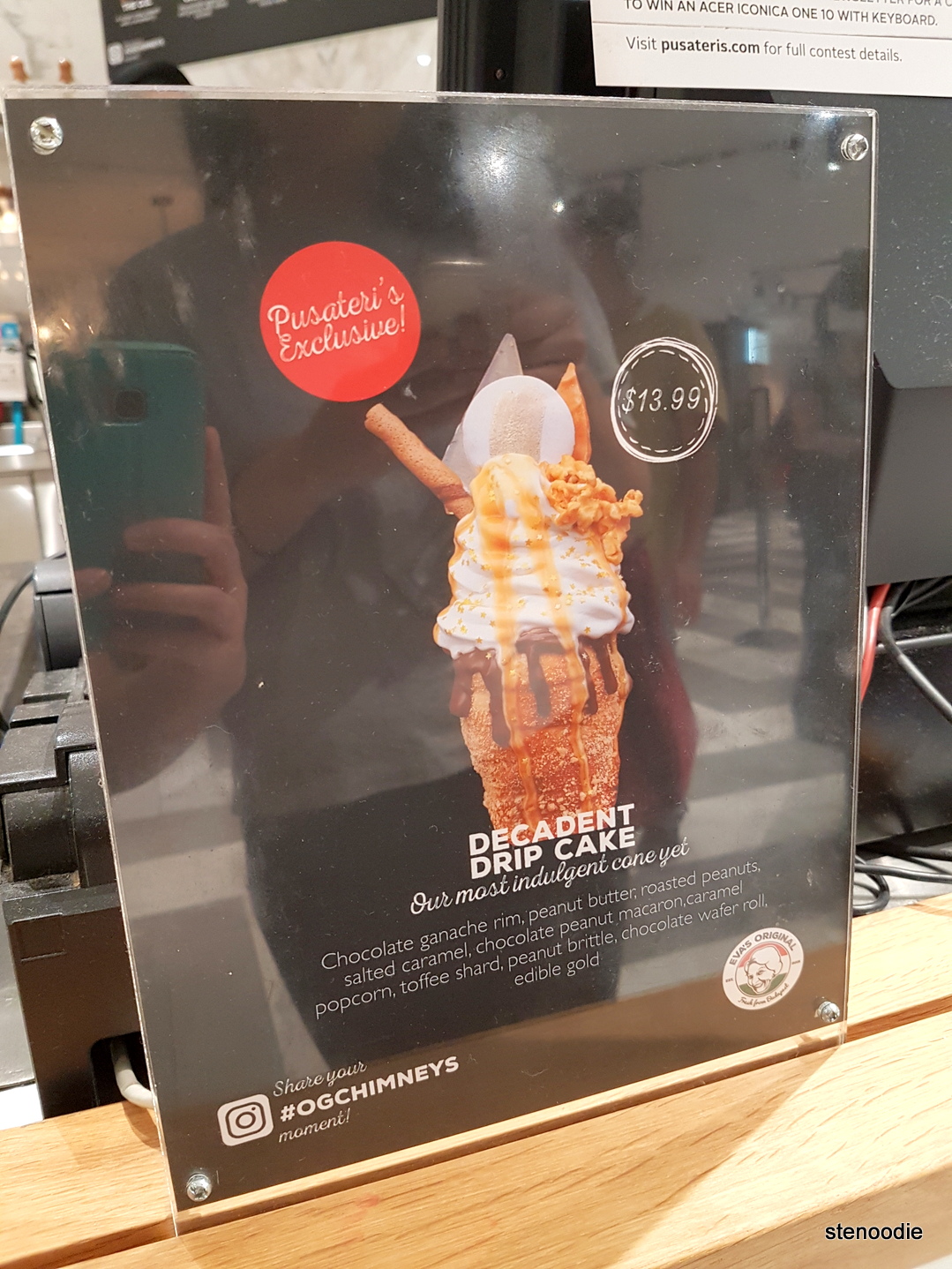 This was the featured chimney cone! 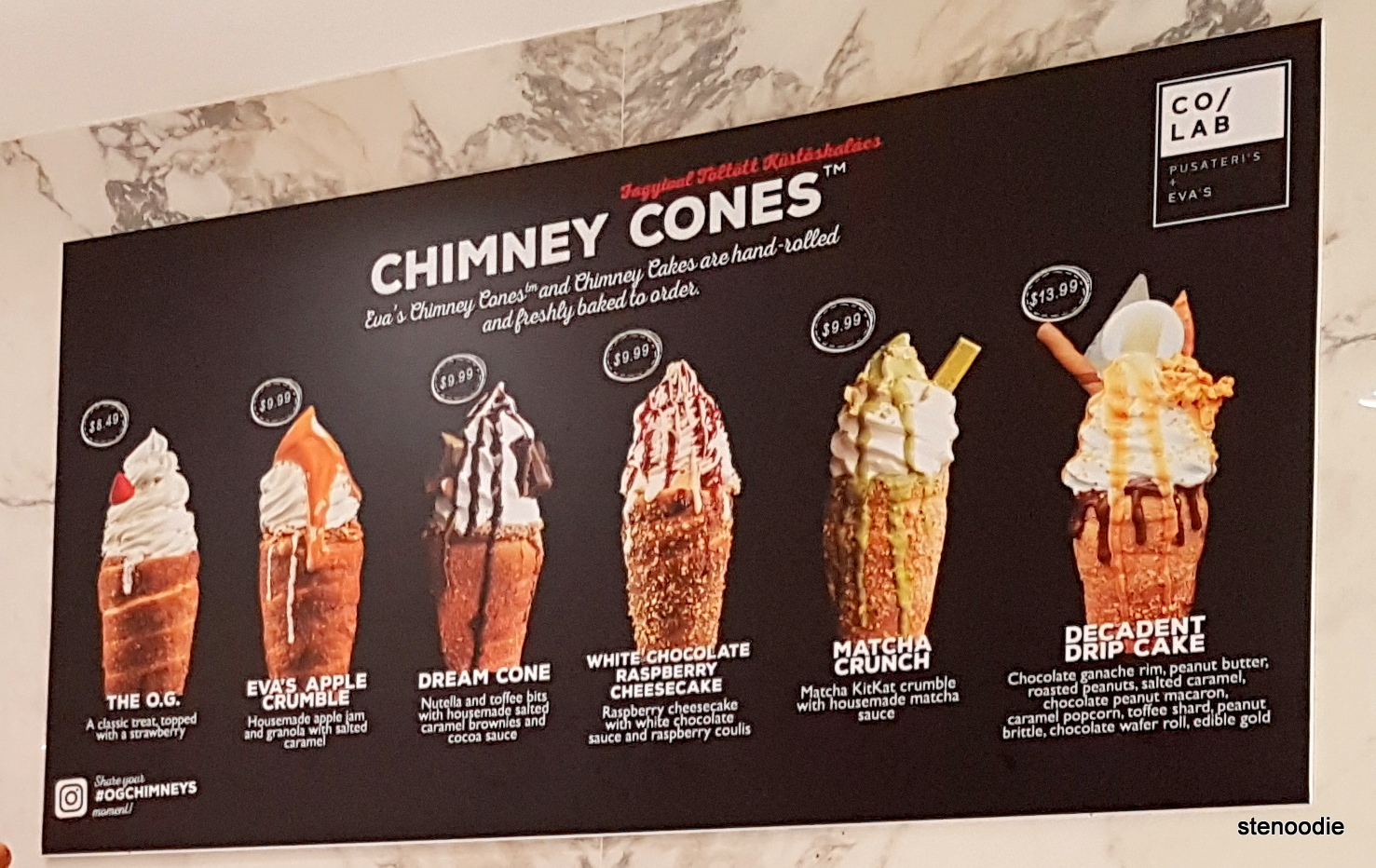 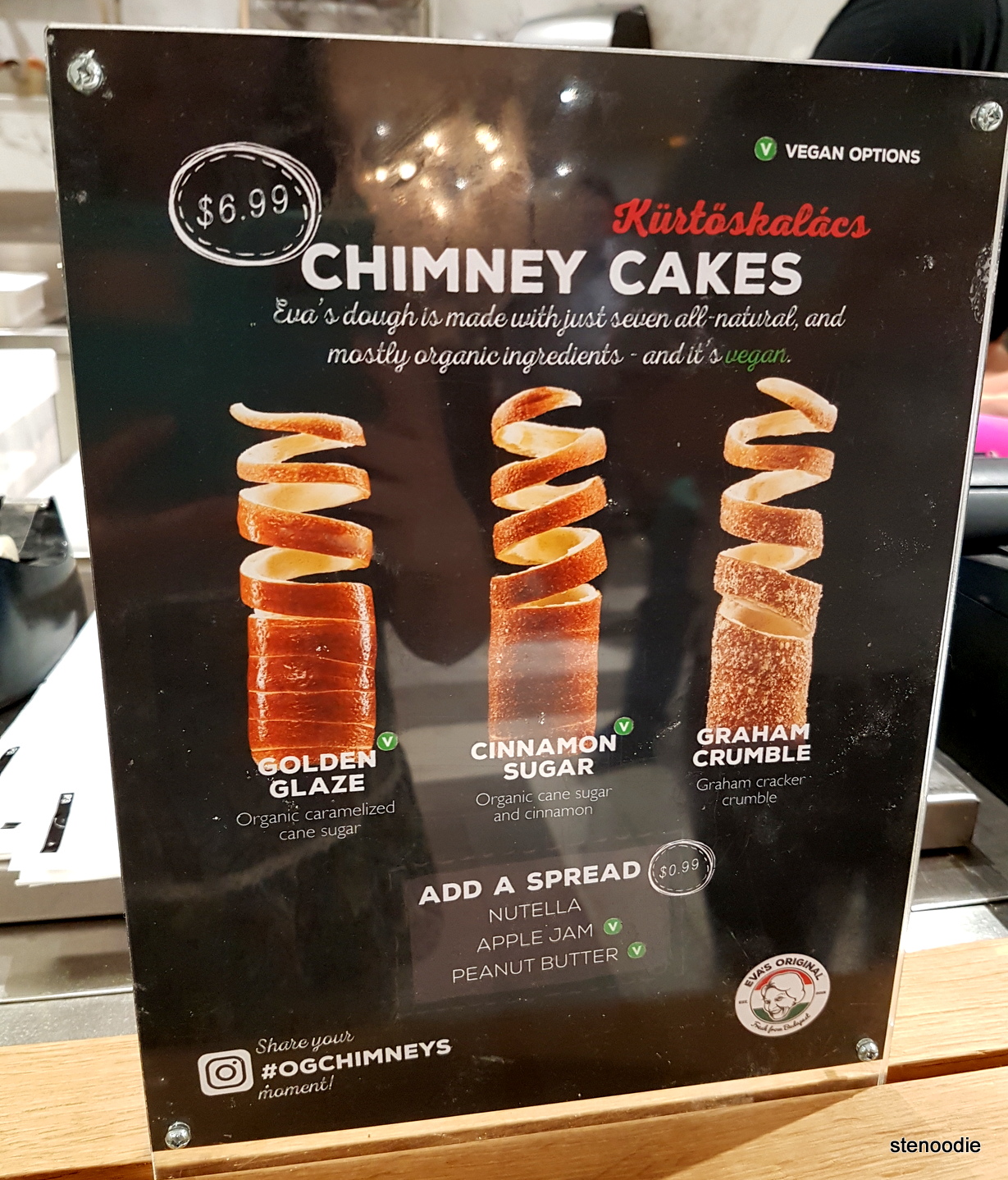 After presenting our message on our phones to the staff at Eva’s Original Chimneys, it did take a while for the staff to make our Decadent Drip Cake Cones for us.  One thing that baffled me was that the chocolate wafer roll that they put on top was from a canister bought from Dollarama.  Uhh… I don’t think food from the dollar store is good enough to consume… 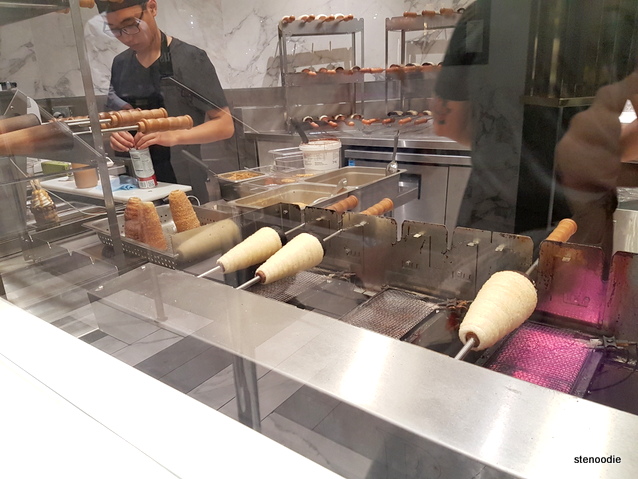 Watching the process of making the chimney cone 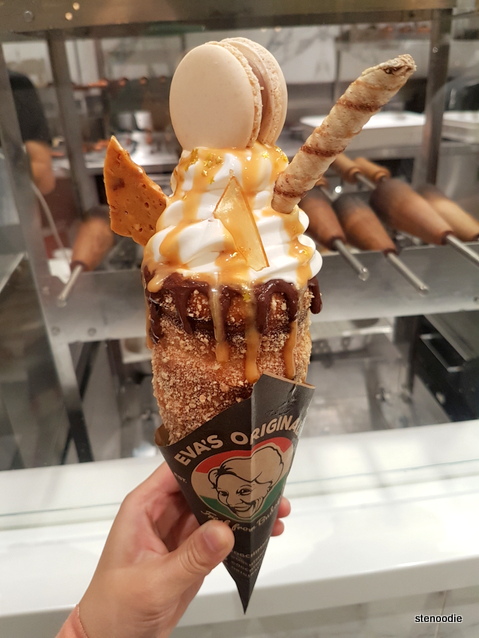 Indeed, it was like a king of chocolate and peanut butter dessert craving all mashed together.  If you don’t like peanut butter or anything caramel-related, you won’t enjoy this cone. 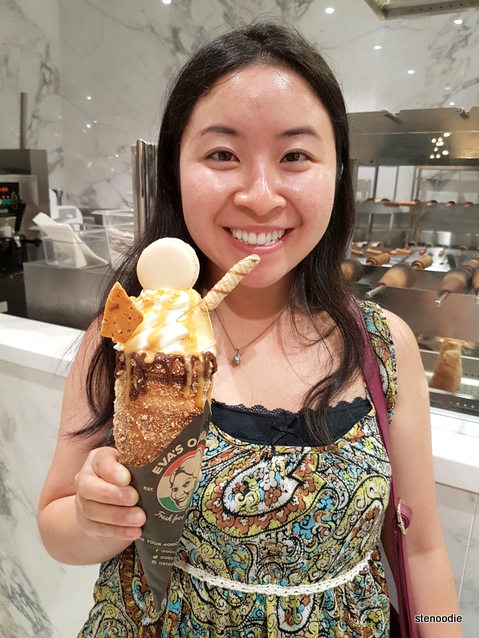 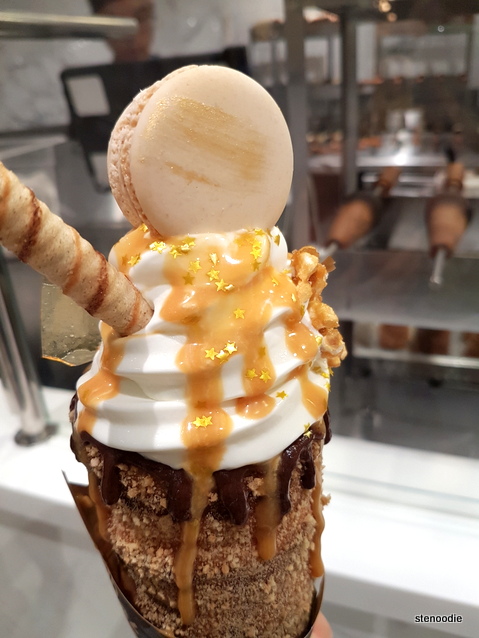 Close-up: you can see the tiny star-shaped edible gold flakes

The chocolate peanut macaron was very soft when I bit into it and its chocolate peanut flavour wasn’t very detectable at all.  At most, it tasted “nutty”.  The chocolate ganache rim was delicious!  It was very dense.  Underneath the real-cream soft serve, there was a lot of roasted peanuts.  This was quite good and would be heaven for a peanut lover.  The caramel popcorn was pretty good.  The toffee shard and peanut brittle were both good.  Once I got to the chimney cone part, I could see that the inside of the cone was spread generously with peanut butter.  It was definitely decadent!  The edible gold stars were cute but didn’t taste like anything.

What I loved most about the cone (just like the original O.G. Cone) was that the real-cream soft serve was so smooth and delicious.  I was surprised that the top parts of the soft serve weren’t actually too cold either and because it was real-cream, it made sense that it didn’t melt right away.  The best part was the soft serve for me!  (I’m not a huge fan of peanuts or peanut butter unfortunately).

Overall, it was indeed a very decadent cone!  For $13.99, you can even share this with a friend to lessen your sugar intake for the day. 😛 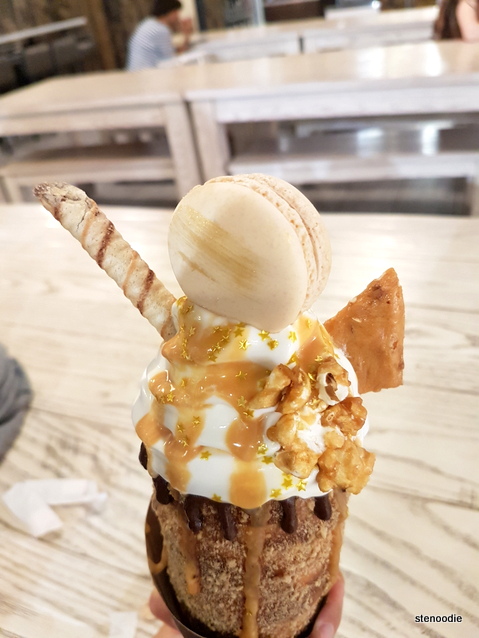 You can see the caramel popcorn here too 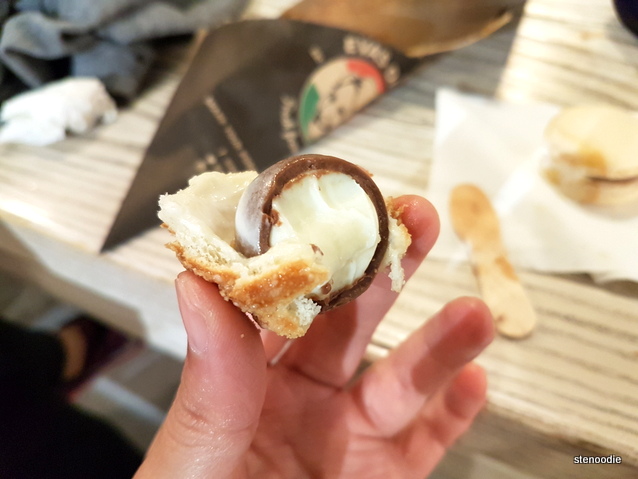 Big chocolate ball at the bottom of the cone

I’m really glad that Priscilla and I made it in time to the Pusateri’s Pop-Up store so that we could redeem our contest prizes before the deadline.  Yay!  Summer treats. 🙂

FTC Disclaimer:  Although Eva’s Original Chimneys provided the product free of charge via winning an online contest, the opinions expressed here represent my own and not those of the contest holder or company.