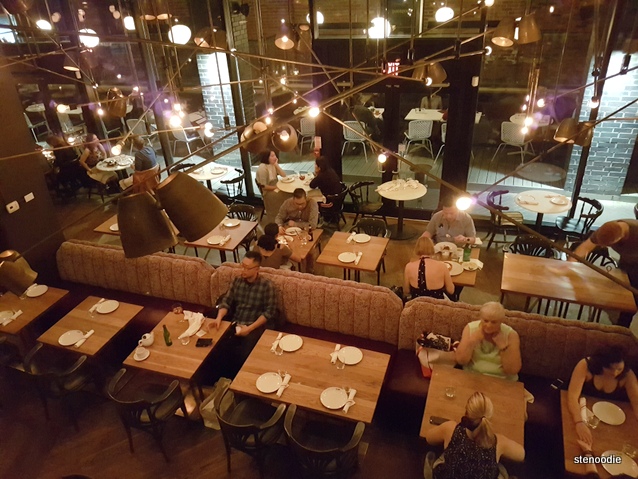 October 6, 2017:  For my birthday this year, Ken surprised me with an authentic Spanish tapas dinner at Patria.  I’ve heard of Patria before and was excited to try it out!  They serve Spanish tapas in a stylish interior hidden past an iron gate on King Street West in downtown Toronto.

Ken had made reservations for us for 5:30 p.m. but since we were running a bit late, he called to inform them.  Upon arrival, the hostess put us at a two-seater table near the front of the restaurant next to the bar.  Immediately, I felt like we were excluded from the main dining area of the restaurant.  All we could see was the doorway of the restaurant and no other customers around us.  After we were served some water and we placed our orders, we actually requested to sit within the main dining room.  I was glad that we did that because our new spot was so much better!  We could see other diners in the restaurant enjoy their food as well as soak in the nice atmosphere of the restaurant.  It was interesting that they had a row of knives hanging on a wall as part of their decor. 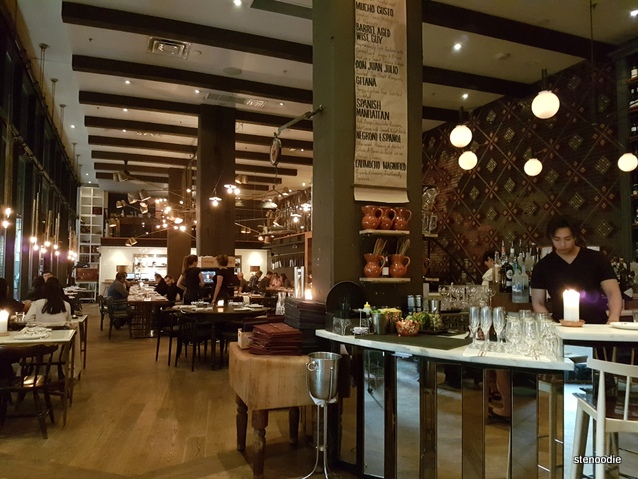 View into the restaurant from the doorway 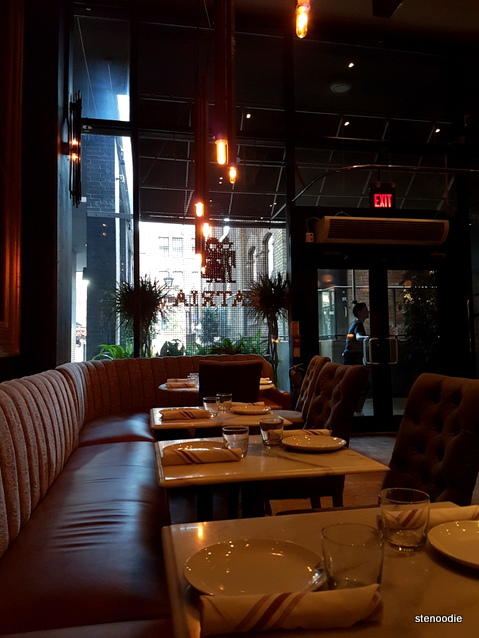 View from our first table 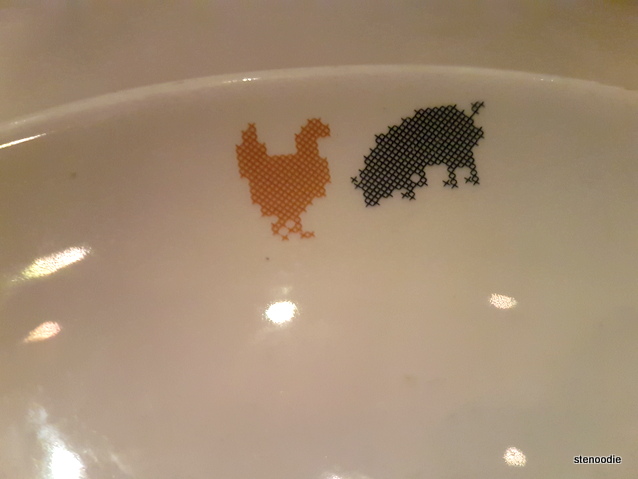 This was on their plates

They had a large assortment of Spanish tapas (small plates), charcuterie, cheese, salads, and larger plates of meats, paella, and sides for sharing too.  We ordered four items from four different categories. 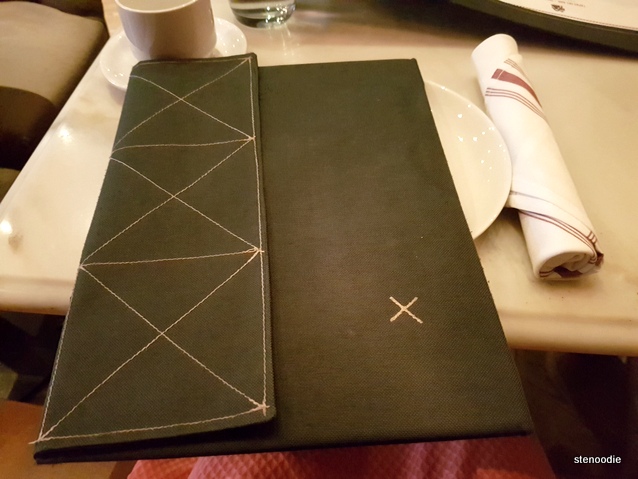 Their menu was bound with really soft cloth cover! 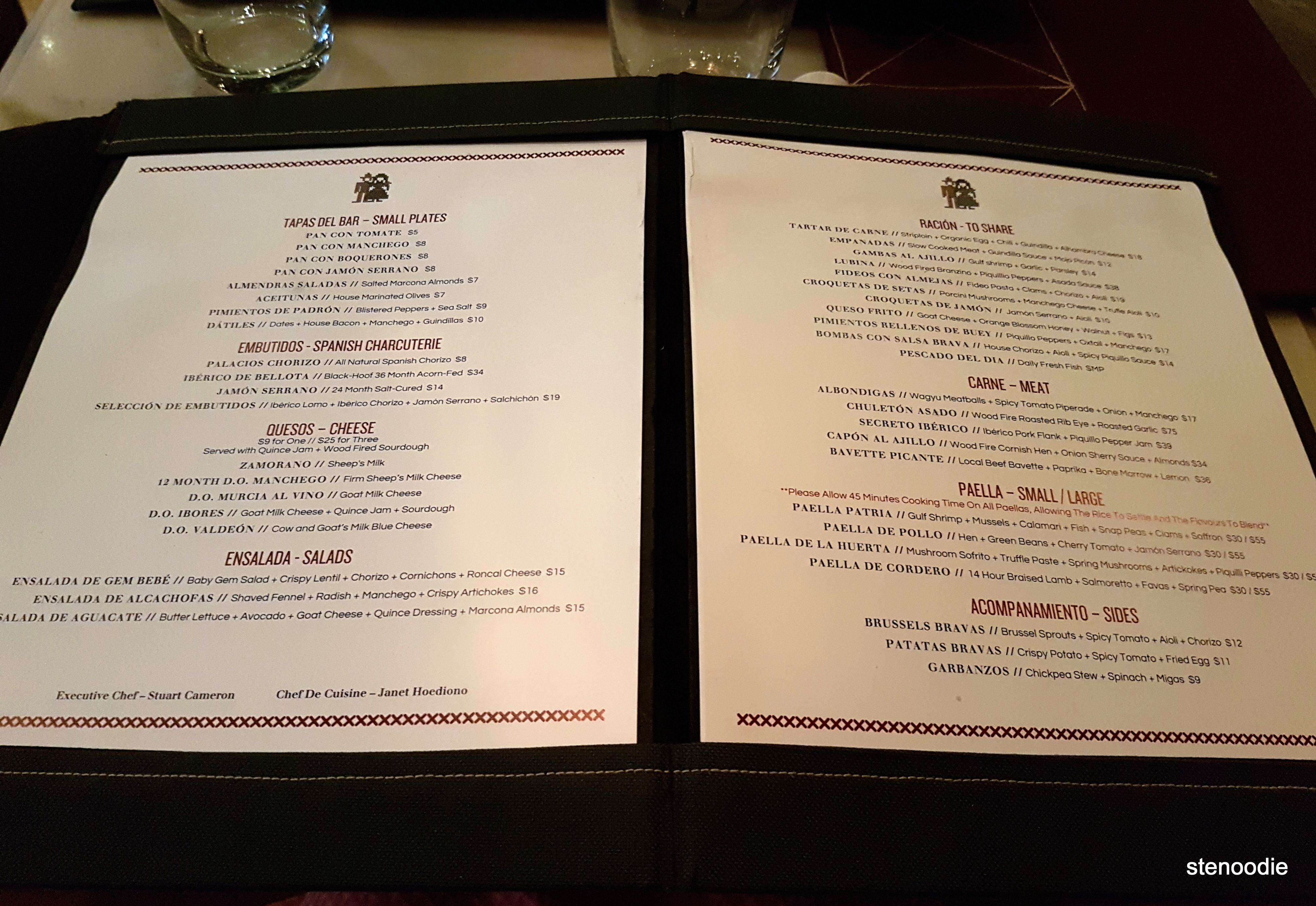 The first to arrive was the Queso Frito, a sharing dish of goat cheese, orange blossom honey, walnut, and figs.  This was a really tasty dish!  The round goat cheese was covered with the orange blossom honey and crispy on its surface.  When Ken cut through the cheese, there was also some hot goat cheese that oozed out.  It was so good!  The walnuts and figs were a good addition to the dish.  I was really impressed with this cheese dish! 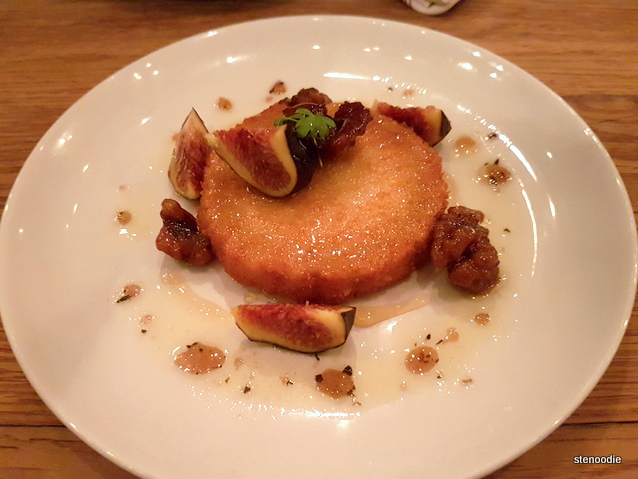 I have had good charcuterie in Spain and the Spanish charcuterie here at Patria sure didn’t disappoint.  We ordered the platter, Selección De Embutidos, of ibérico lomo, ibérico chorizo, jamón serrrano, and salchichón.  Within the platter itself, I couldn’t distinguish which meat was which but all I know is that it was all really good!  I had some preferred ones over other ones but this was such a solid chacuterie platter! 😀 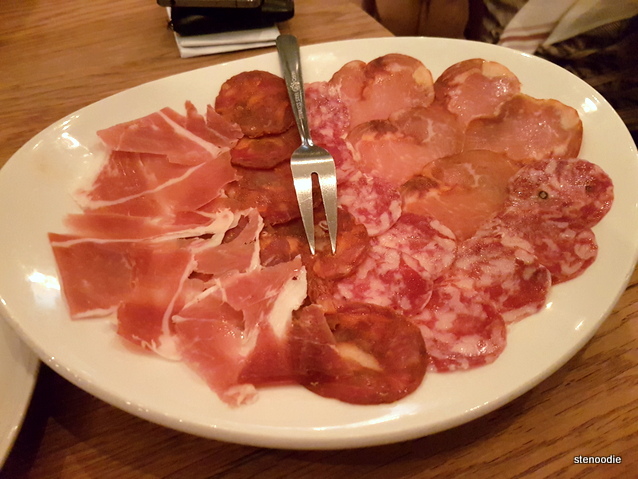 At this time, our drinks arrived (since we had ordered our drinks after settling down at our second table).  I enjoyed a glass of Red Sangria.  It had red wine, port, sweet vermouth, Spanish brandy, spiced poached pear reduction cloves, orange juice, and pear nectar.  It was amazing!  One of those really good red sangrias. 😀 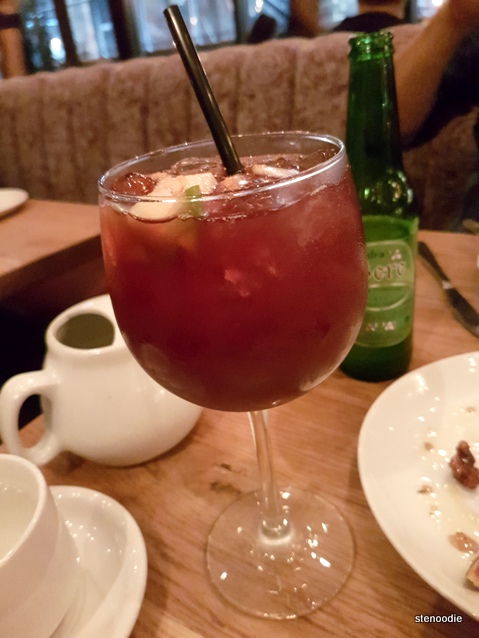 Ken enjoyed a bottle of Sidra Bere, crisp and refreshing apple cider from the Basque Region of Spain.  I wasn’t a huge fan of this rougher tasting apple cider. 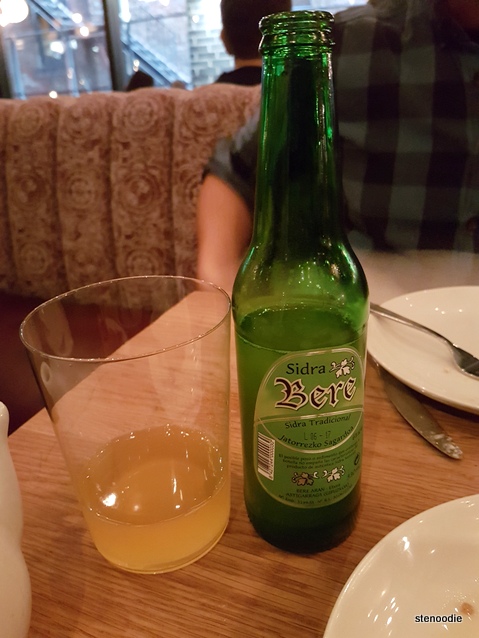 Sidra Bere. $9
-crisp and refreshing apple cider from the Basque Region of Spain

Up next, we received our small plate of paella.  We ordered the Paella Patria which had gulf shrimp, mussels, calamari, fish, snap peas, clams, and saffron.  Mmm, this was an amazing paella!!  It might be one of the best paella dishes I’ve ever had.  It was so full of flavour and the seafood were all so fresh and plentiful.  It was so good! 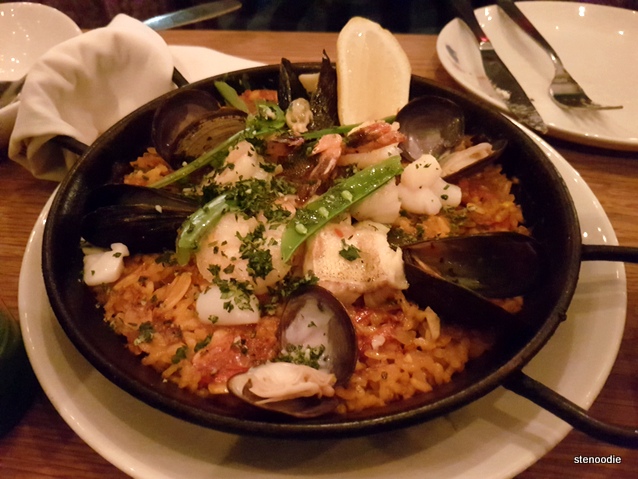 We finished off with a meat dish which was the Albondigas, wagyu meatballs with spicy tomato piperade, onion, and manchego.  Ken really liked the wagyu meatballs!  I thought they were good; the meatballs were very densely packed. 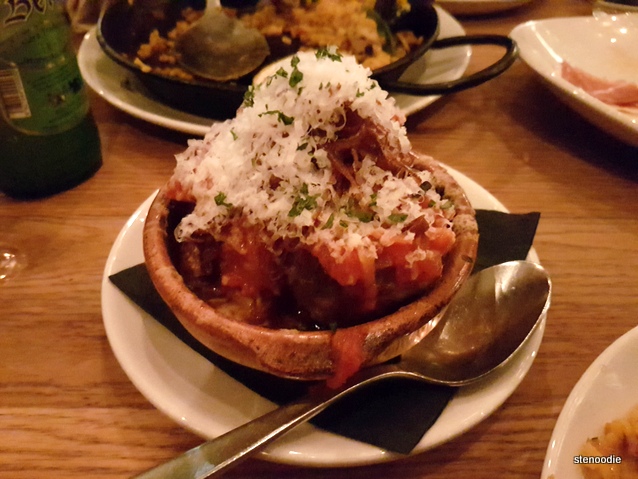 We enjoyed really good and friendly service from our server that night.  He checked us on us periodically and was very upbeat. 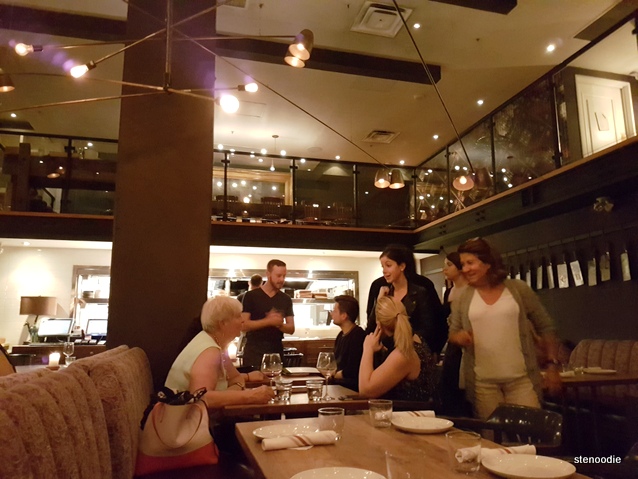 They have a second level seating area too

After this, Ken whisked me away to see the new Cirque du Soleil show! 😀