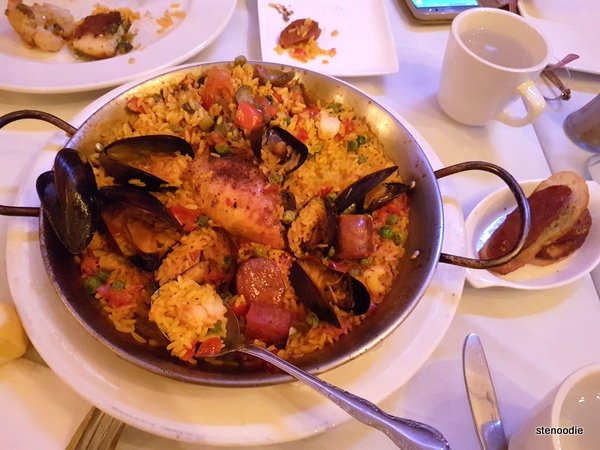 February 13, 2018:  For dinner, we were dropped off at the Grande Allée E area street while the other tourmates went to eat at the neighbouring French restaurant.  We only had less than an hour and a half for dinner before getting back on the bus to go to the hotel.  There was actually a number of restaurants to choose from on the street.

As we passed by Copas, the staff standing in front of the restaurant greeted us and introduced their menu to us briefly.  She highlighted that they were a Spanish restaurant and serve a soup with the entrées.  We had just got off from the bus so we still wanted to look around first.  However, we decided to eat at Copas after all as the other restaurants were mostly pub food, burgers, and sandwiches.

Copas was really nice inside!

Our table of 11 entirely took over one of their two dining rooms.  We had one server serve us.  She was understanding of our needs and was very accommodating and friendly during the visit.  I appreciated her patience especially since not everyone in our party spoke perfect English. 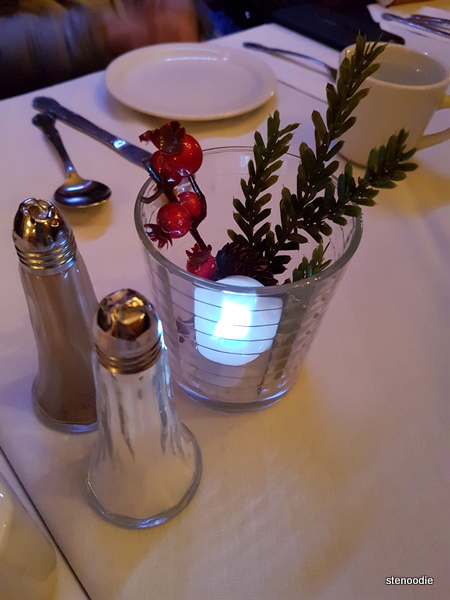 Decor on the table

My mom and I shared the House Paella (from the menu which included soup and coffee/tea) and the Grilled Cod & Chorizo. 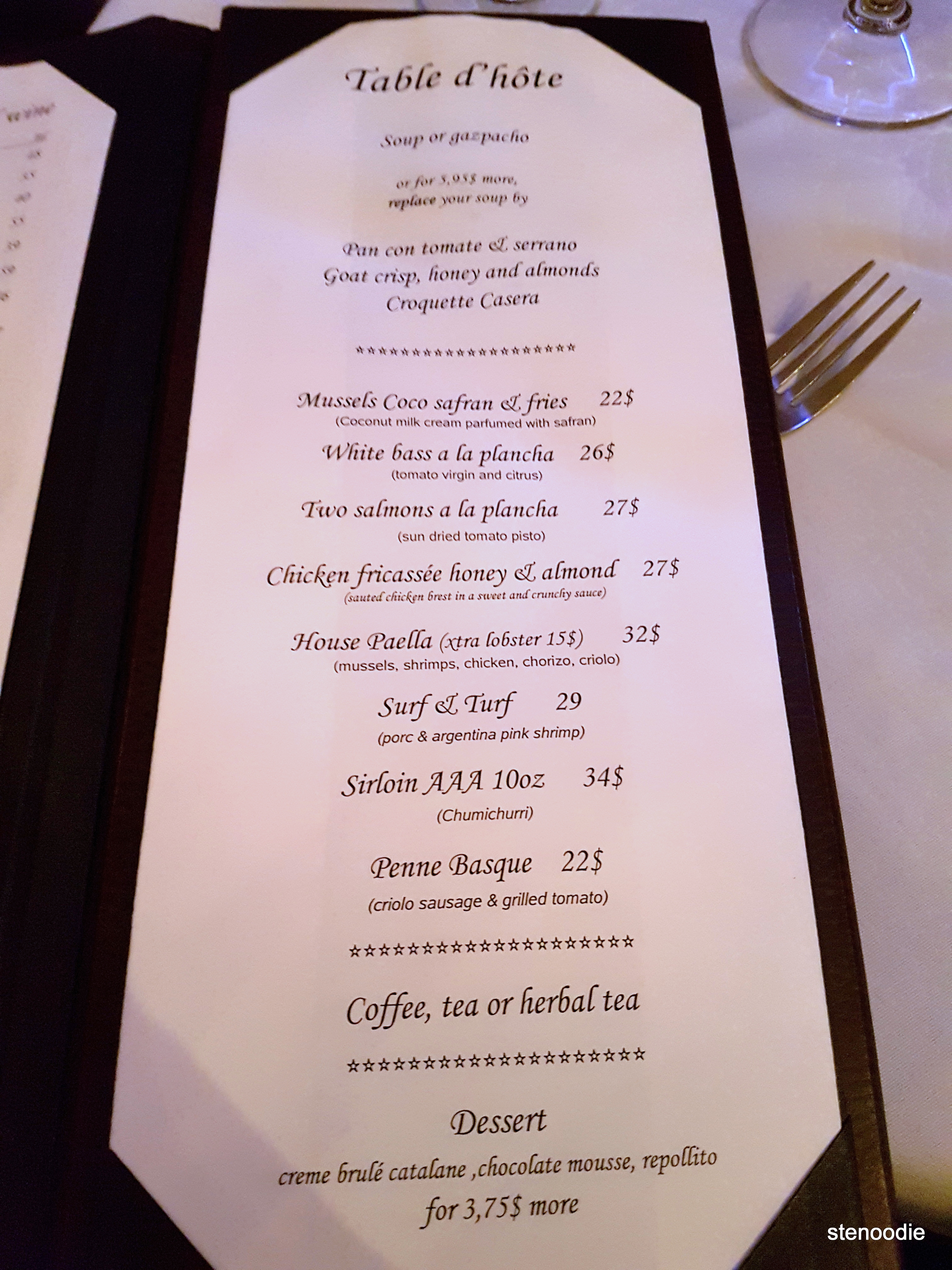 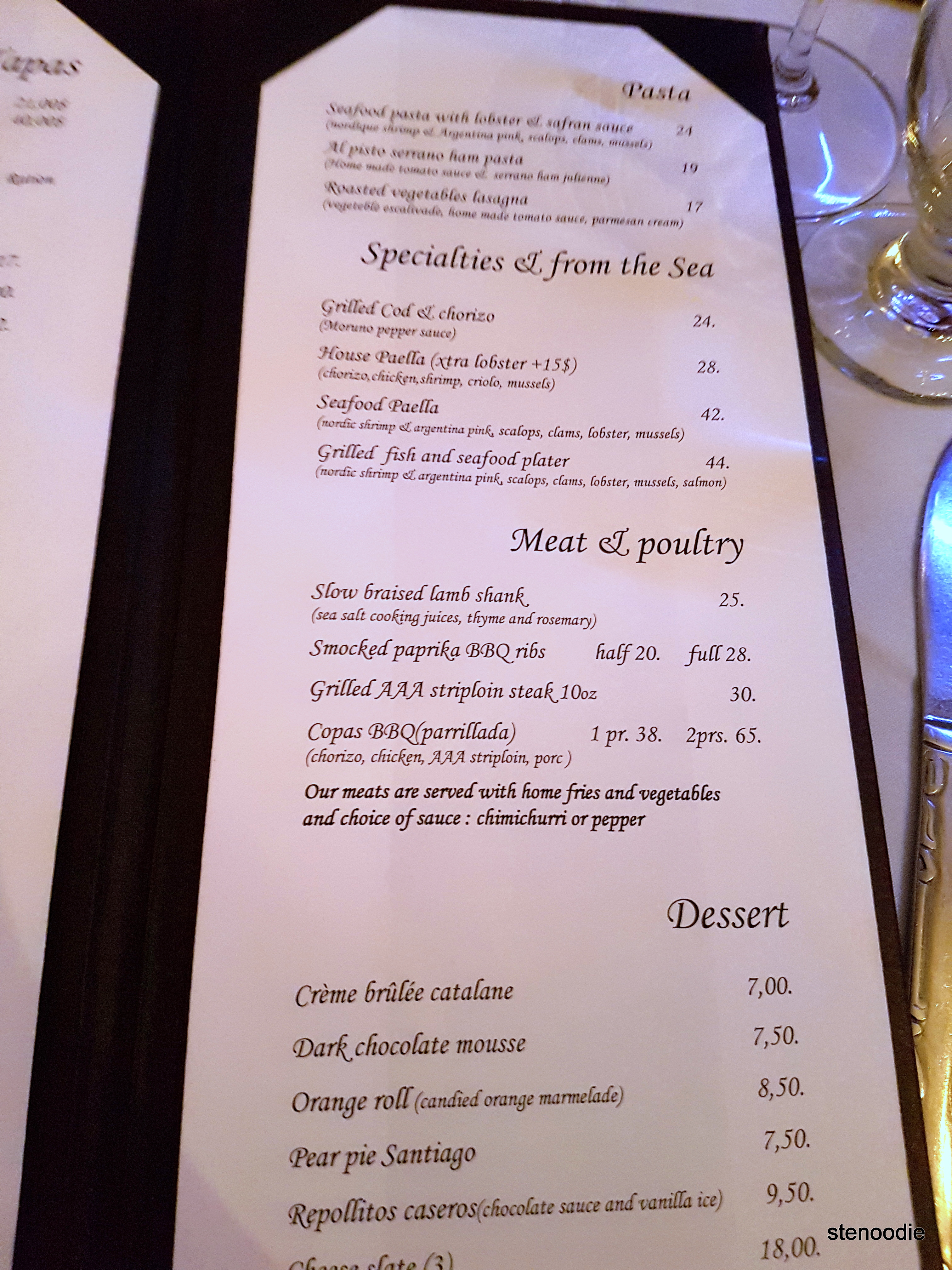 One page of dinner menu

The food arrived by 7:30 ish which was still okay for us to leave by 8pm.  The included soup was a mushroom soup.  It was pretty good and thin in consistency. 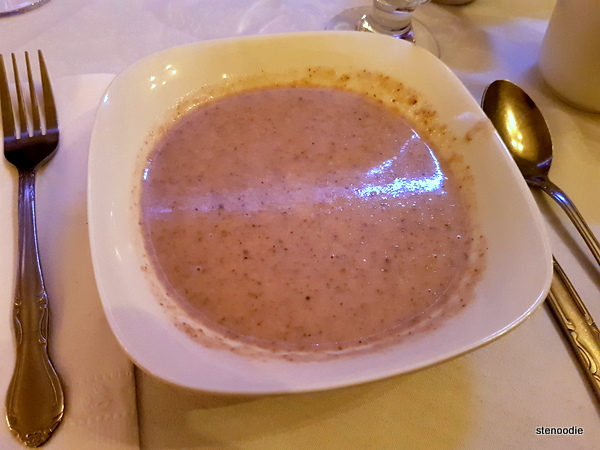 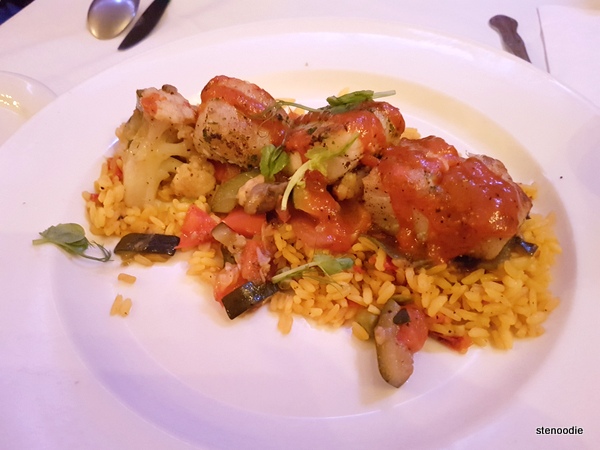 The Grilled Cod & Chorizo was a slightly smaller portion than I expected.  It surprisingly also came with the same paella rice.  The portion was arranged akin to an appetizer.  The chunks of grilled cod were not bad.  I didn’t like how the rice was a bit cold though.  I didn’t see any chorizo in the dish.  I asked the server about it and she asked me if I wanted it separately on a plate.  I said no but thought the dish included chorizo… (hence, “Grilled Cod & Chorizo” name).  She answered that it was just the chorizo sauce.  Hmm… okay. 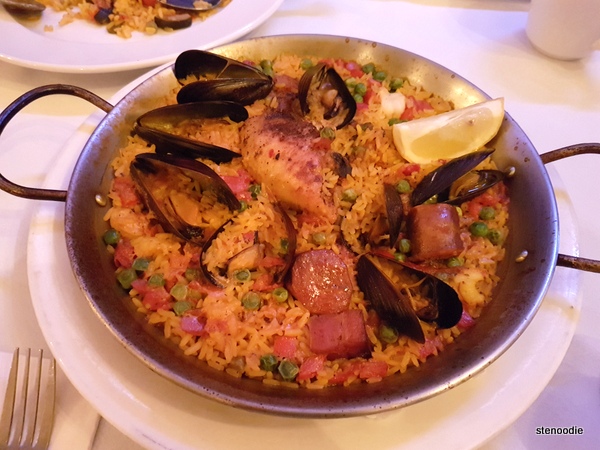 The House Paella arrived.  It had mussels, shrimps, chicken, chorizo, and criolo.  The paella rice in this dish was very hot — kept warm by the pan which the server did warn us was hot.  I still wasn’t a huge fan of this rice despite it being hot because it was a bit harder in texture than my preference.  The chicken thigh was soo tender and delicious though.  The shrimps were few and far in between.  The chorizo meat was hard and a bit salty. 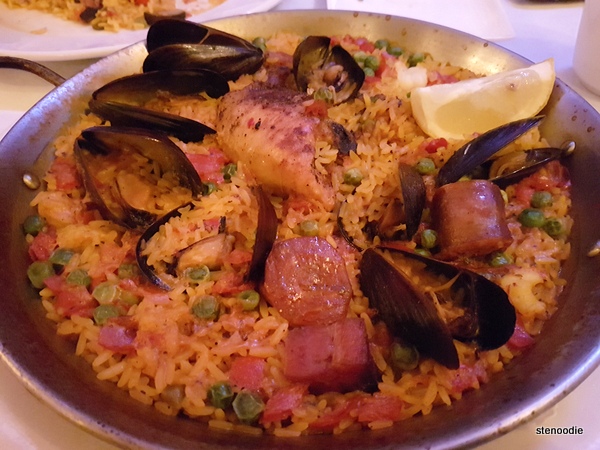 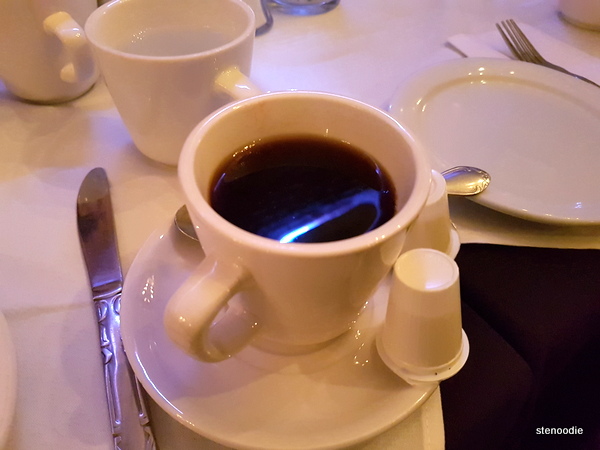 After this, our server actually did follow up with a small dish of chorizo on toasts for us.  This must have been with the Grilled Cod & Chorizo dish.  I liked the chorizo on toast better than it just by itself in the paella. 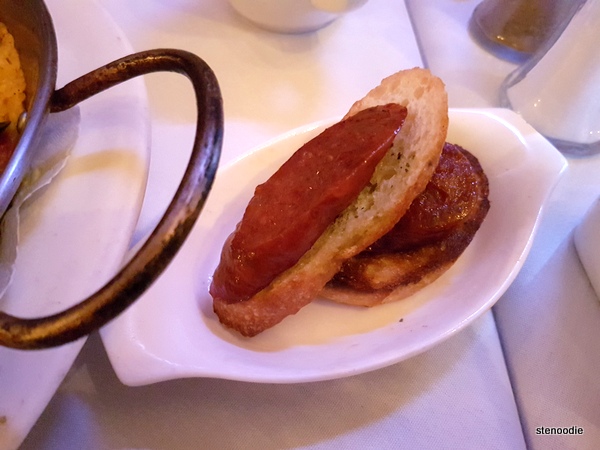 Photos of what my relatives had: 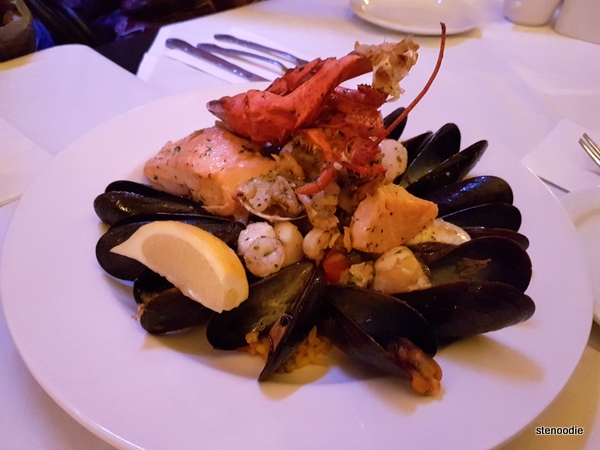 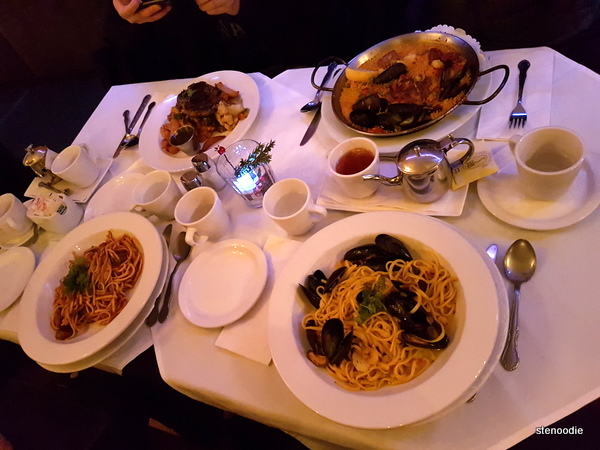 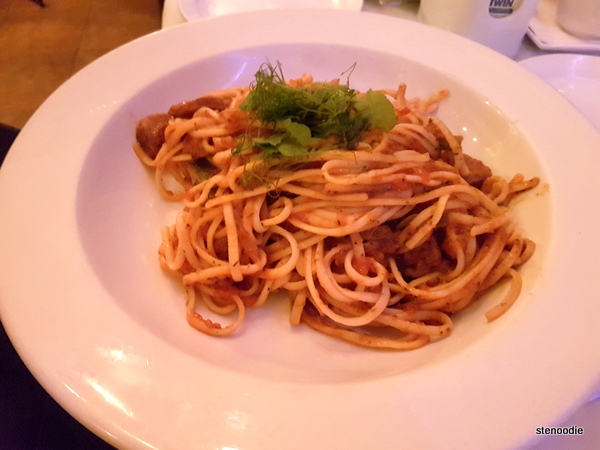 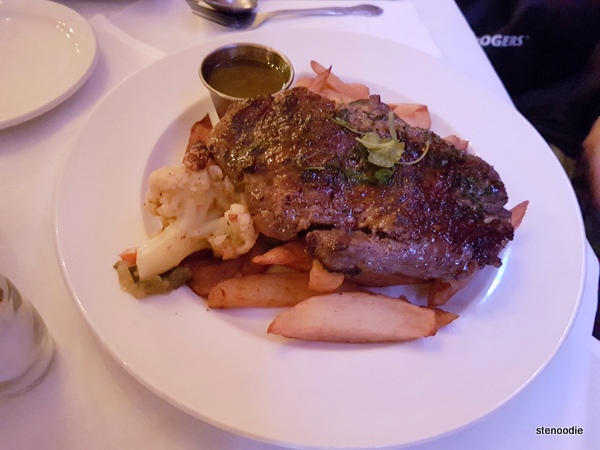 Spaghetti with cream sauce and mussels: 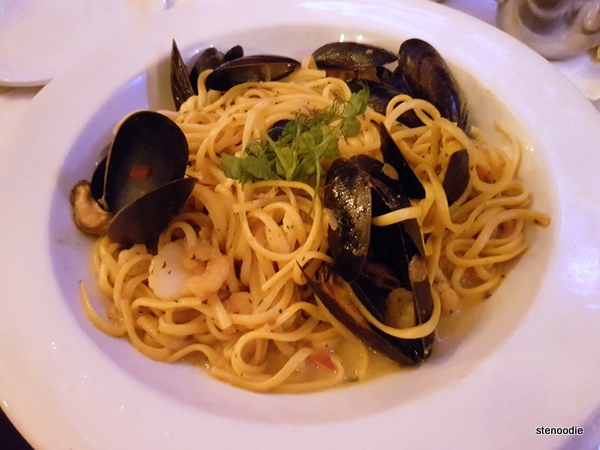 Spaghetti with cream sauce and mussels

We completed our dinner and asked for the bill and were out by 8:10 p.m. to board our bus.  Yay! 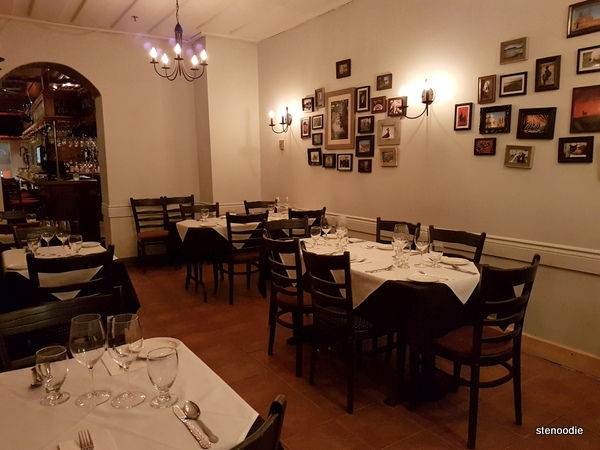 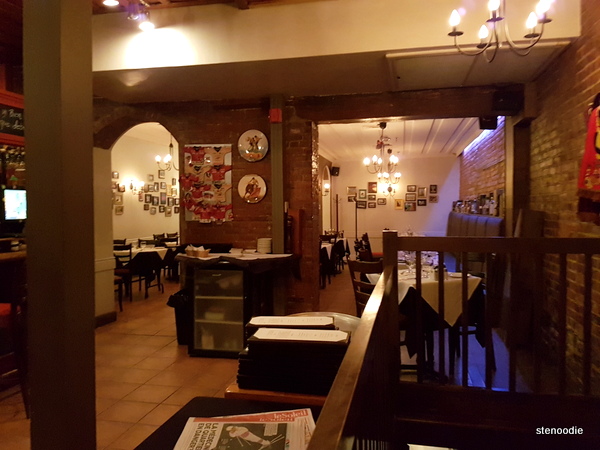 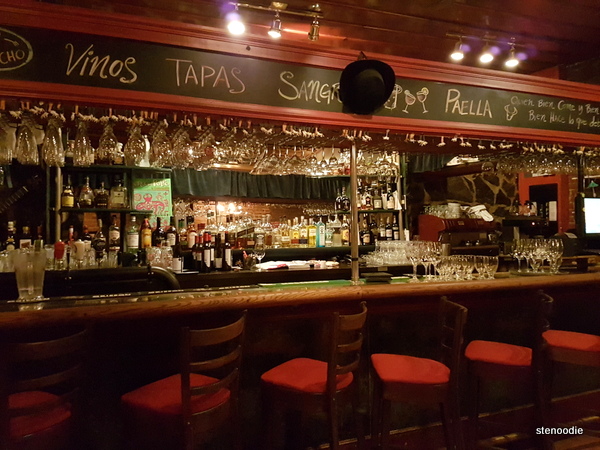 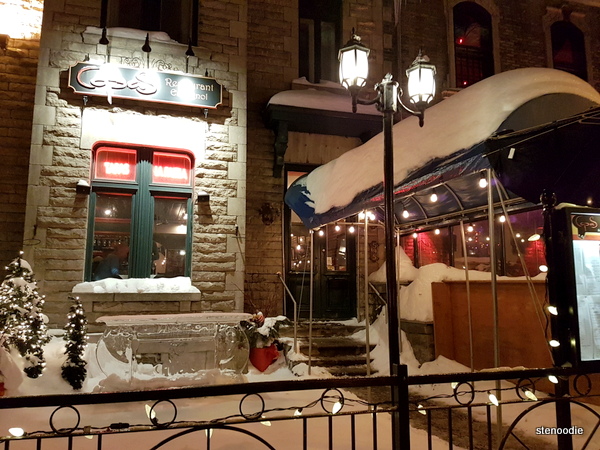 1 Response to Spanish Dinner at Restaurant Copas in Quebec City