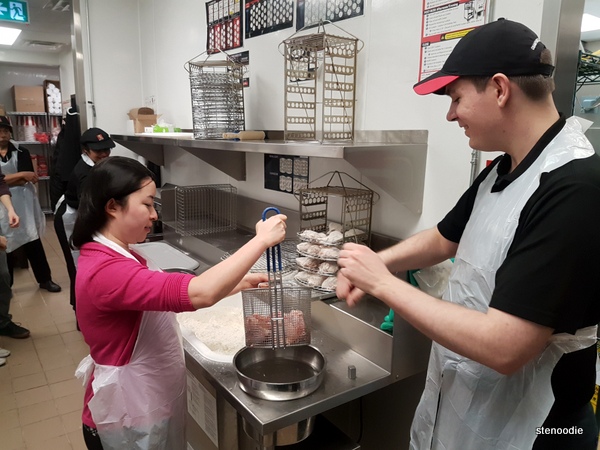 March 18, 2018:  Sometimes it pays to listen to the radio.  It was only because I was listening to the radio while at home that I found out that the KFC Cooking School was accepting students this year!  The KFC Cooking School is actually a one-day cooking workshop run by the official KFC brand where they teach you how to make the finger lickin’chicken.  As a big fan of KFC (no, the other brand starting with a P doesn’t cut it), I was extremely interested and Googled “KFC Cooking School” right away upon hearing it on the radio.  I immediately found the right link and found out that they were bringing back the cooking school this year for one day in just three Canadian cities: Calgary, Halifax, and Mississauga!  I also found out that the afternoon time slots for the class was already all booked save for one spot each.  Since I wasn’t going to go alone, those spots didn’t work for me.  Instead, the only available slot was the 9 a.m. bright and early one.  I messaged my SO and luckily he was interested in going too.  Did I mention that the class was only a $5 registration fee?  It was a total steal to get to experience such a cooking class!  And thus, we registered for the 9 a.m. Mississauga KFC Cooking School.  I was SO excited for it!  And although we were going away on my first press trip that same weekend, I was actually more excited about this! 😀 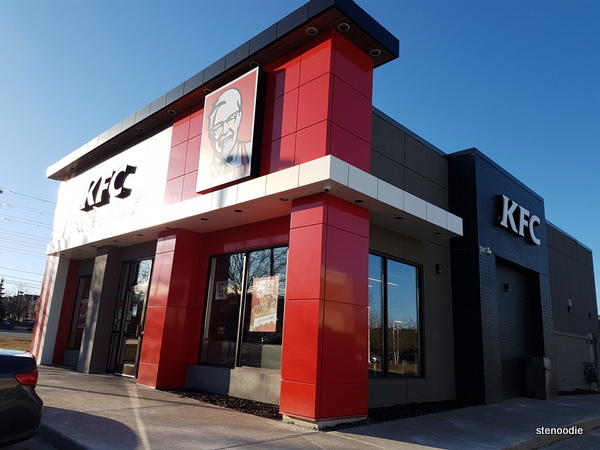 The restaurant was closed down just for us for the better half of the day!

So then on the morning of the 18th, we got up bright and early at 6:30 a.m. and took the drive from Port Hope to Mississauga.  It was a beautiful day with a blanket of fluffy white clouds in the sky.  We were instructed to arrive about 15 minutes beforehand to get ready and surprisingly, there were only six of us in the class.  It was like a triple date actually.  XD

Being in the 9 a.m. class, we were actually the first class of the day.  I liked this because I found the enthusiasm and energy of the staff to be more raw and passionate than say the last class of the day where I’m assuming the staff members would be so much more tired doing and repeating the same thing for the students. 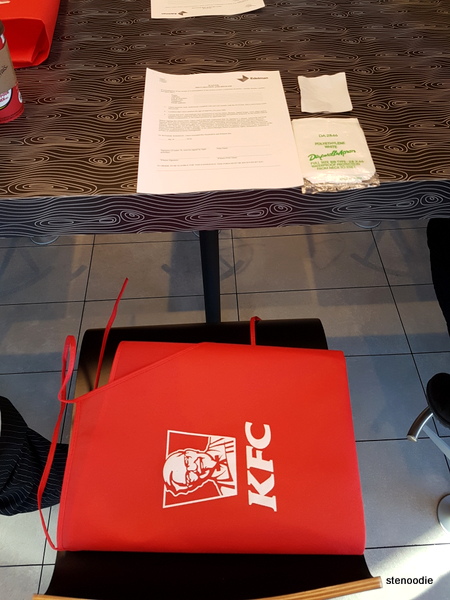 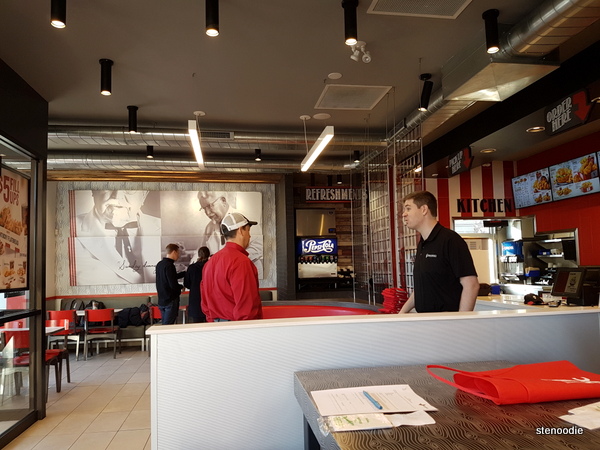 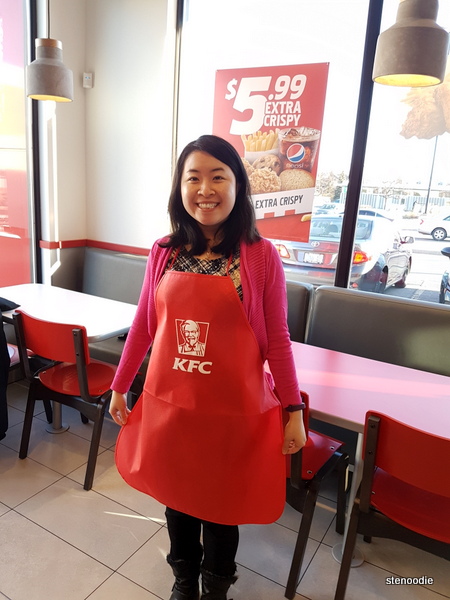 Anyway, upon arrival (there was a security guard in the vestibule and the KFC location was closed that day just for us), we signed our release documents and put on our aprons.  They actually gave us a red KFC branded apron to take home.  During the course of the class though, we wore plastic disposable ones and hair nets so that we could take home a clean apron.

We were first given a handwashing lesson on how to wash our hands thoroughly by singing the Happy Birthday song twice with soap, drying our hands with a paper towel, and then using hand sanitizer.  Then we went to the back of the restaurant where we were shown a quick tour of the facilities.

It felt really cool to behind the scenes of a KFC restaurant! 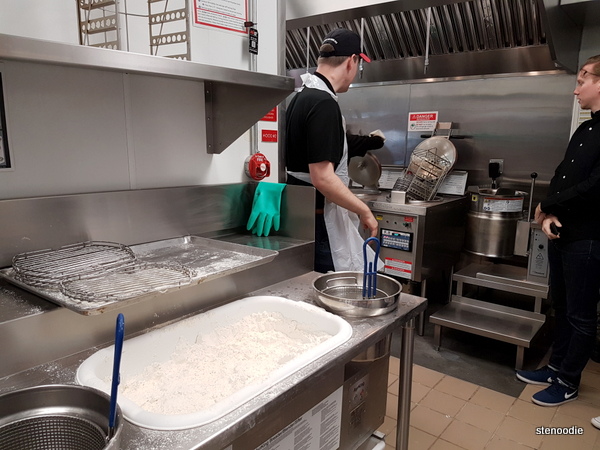 The bulk of the one-hour class was to learn how to flour the Canadian farmed chicken in their 11 herbs and spices fixed with pastry flour (pastry flour is a lot smoother and softer than regular flour).  There was a specific way to do this and they even had names for the process.  I unfortunately don’t remember all of the process names though  XD.  We did wash our hands another time before taking a stab at it.  The process after retrieving it from the refrigerator and inspecting each one to make sure no bones were broken and everything was intact was basically to put the chicken in a quick water bath, turning and draining out the basket in a 45 degree so that the water flowed out, “jumping” the basket of chicken 10 times to get out the excess water, pouring the basket of damp chicken into the mixed pastry flour, mixing it thoroughly in specific steps to coat the chicken with the mix with our hands, taking it out and making sure that all the chicken was coated well, and then put onto a rack for the pressure cooker. 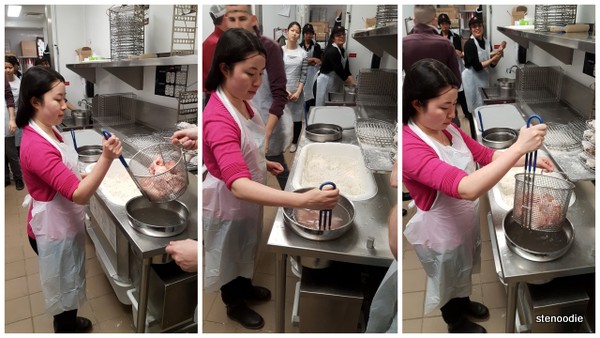 Bathe and drain the chicken 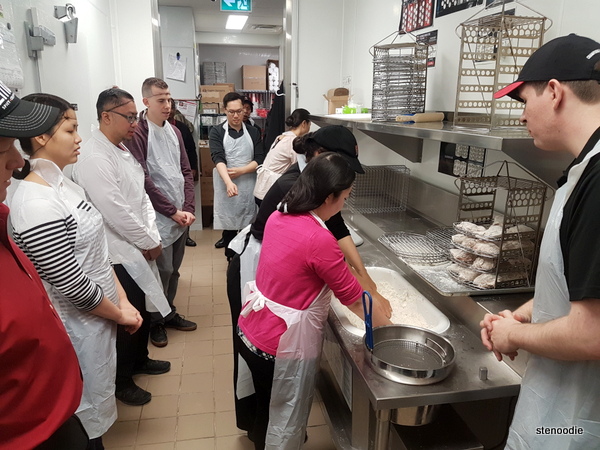 Each person got a turn to try it out 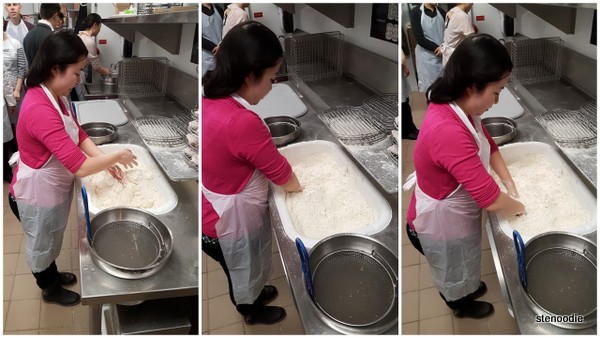 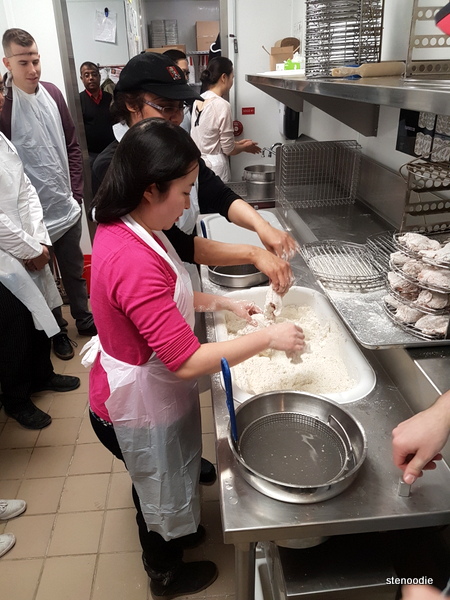 Grab two, clunk against wrists, and place on rack 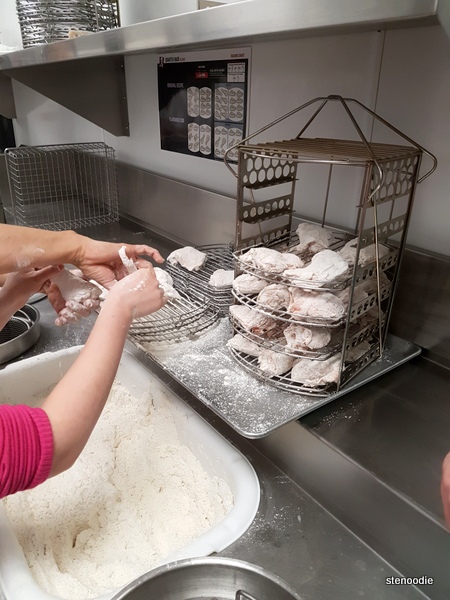 Off you go, chickies

It took about 16 minutes for the chicken to be ready.  It was such a fun and hands-on process.  I really appreciated and liked how the staff were so enthusiastic and eager to take photos for us too.  We didn’t even have to ask!  They wanted to show their process of how the chicken are made each day. 😀  They emphasized that KFC is very proud of their product and this was definitely true. 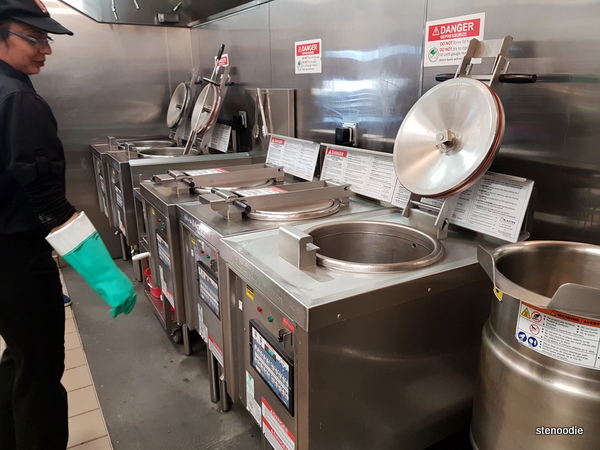 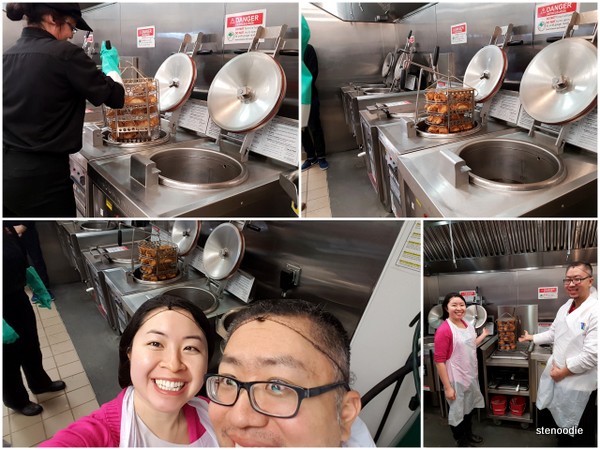 Yelling “Victory!” as the chicken was released 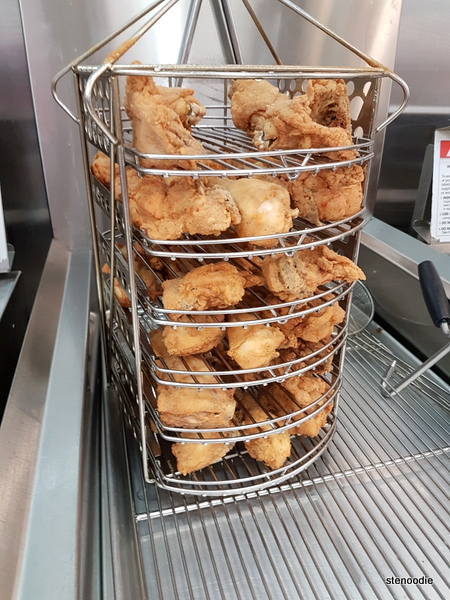 All of our freshly fried chicken! 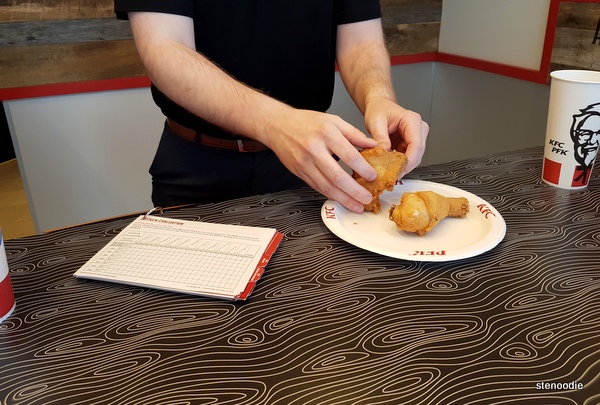 Of course after the class, we got to taste the chicken that we made.  We were also given a fountain drink and fries with gravy.  We also learned briefly about how they check for chicken “doneness” quality — the colour of the skin, whether the skin is crispy enough, whether the chicken was coated thoroughly, if the kidneys and internal parts were removed, and a quick taste test of whether the meat was moist or tender enough.

Eating freshly fried chicken really makes a big difference.  The first few bites of the first piece of KFC chicken I had was so good!  It was probably the best I’ve had since the meat was so moist.  So yummy and having experienced how to make the KFC chicken makes the whole eating experience a lot more meaningful now too.  I actually had always thought the chicken was made through a mechanical process.  I hadn’t realized how hands-on (literally) it was!  I also liked that the chicken was all Canadian farm fresh chicken and not something obscure where I had heard about long time ago about it being “fake chicken”. 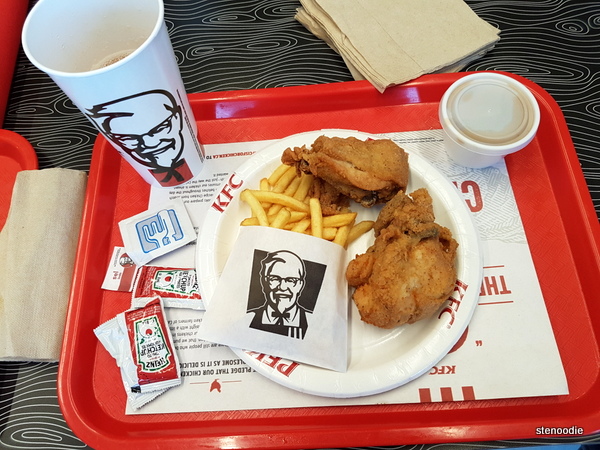 I try not to use lids and definitely not straws these days. They’re unnecessary if you eat mindfully and not on the go 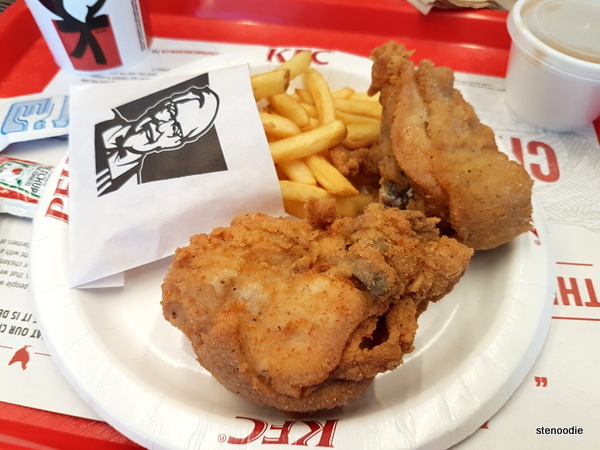 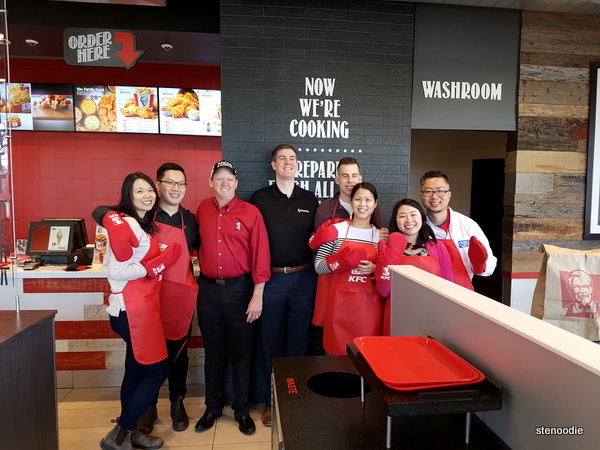 I learned from this experience that as long as you have the 11 herbs and spices recipe and the right pressure cooker, you can also make your own KFC chicken at home too! XD  We were told that two of the 11 herbs and spices were salt and pepper.  The rest are completely secretive and even when they have the ingredients shipped and mixed together, two separate companies do it so the secret is kept safe.

We were also lucky being the first class of the day as we turned out to have made more chicken than expected and each pair of us got to take home a bucket of chicken!  What a pleasant gift for us!  I wonder if the students after us got to take home any extra chicken?  Hmm. 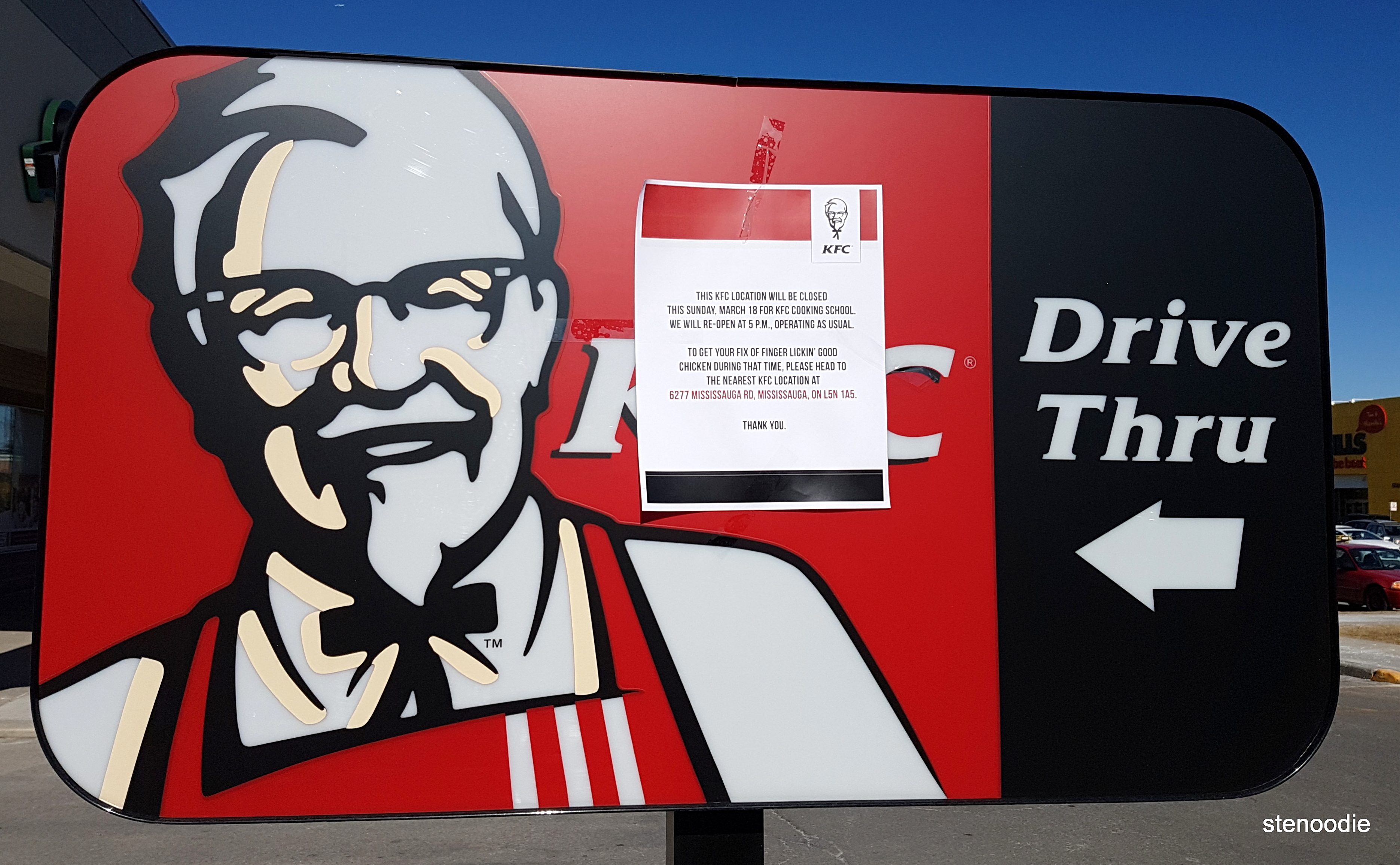 If you are ever interested in learning about how KFC chicken is made or the process, I highly recommend looking out for the KFC Cooking School next year!  I don’t know whether it’s the same time of the year where they would offer it again (if they do), but certainly keep your eyes open.  For just $5 and a meal, it’s definitely worth it in terms of value.  Now every time I eat KFC chicken, I’ll be reminded of this wonderful and fun experience! 😀