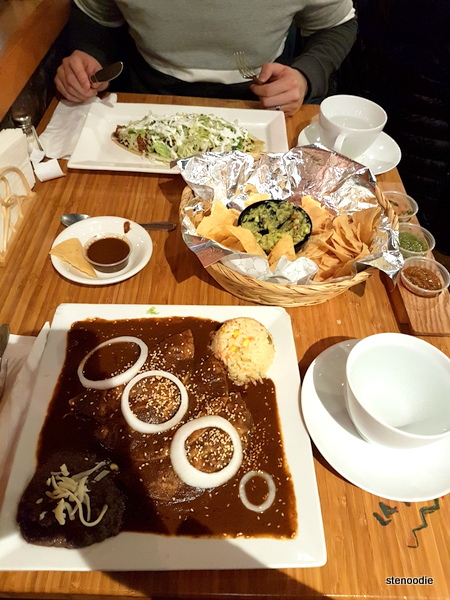 Date night at La Taquizza Restaurant & Tequila Bar!  This is a Mexican restaurant and was one of a few that still had available seating on a busy and cold Saturday night.  We were welcomed in and given a seat near their kitchen where one of us was able to see through the glass panes and glimpse the kitchen staff assembling tacos and quesadillas and other items.  They had a TV on the wall showing the game and there were lots of people dining in.

Their menu was extensive and boasted a lot of authentic Mexican dishes!  The Enchiladas de Mole Poblano caught my eye.  I hadn’t had mole before like this and was curious to try it.  While we were deciding what to order, the really friendly and warm male server (or was he the owner?) indulged our drink orders and asked if we wanted anything to start, like guac and chips.  We accepted the appetizer suggestion. 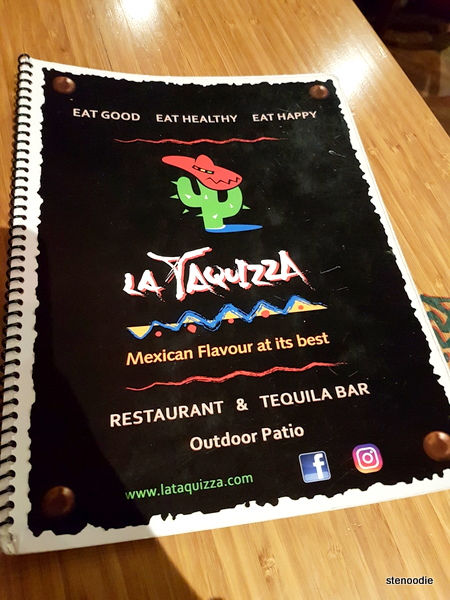 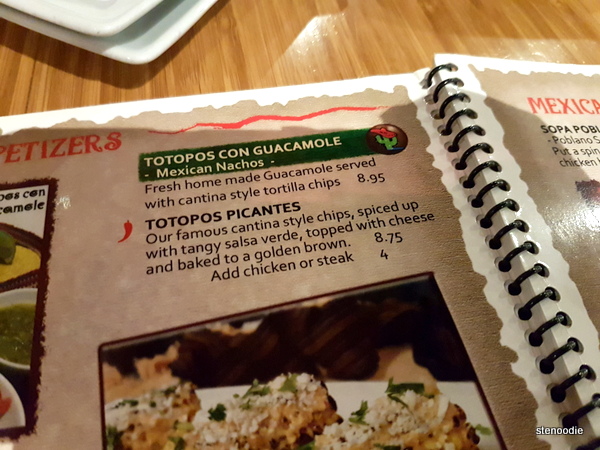 Part of the appetizers menu 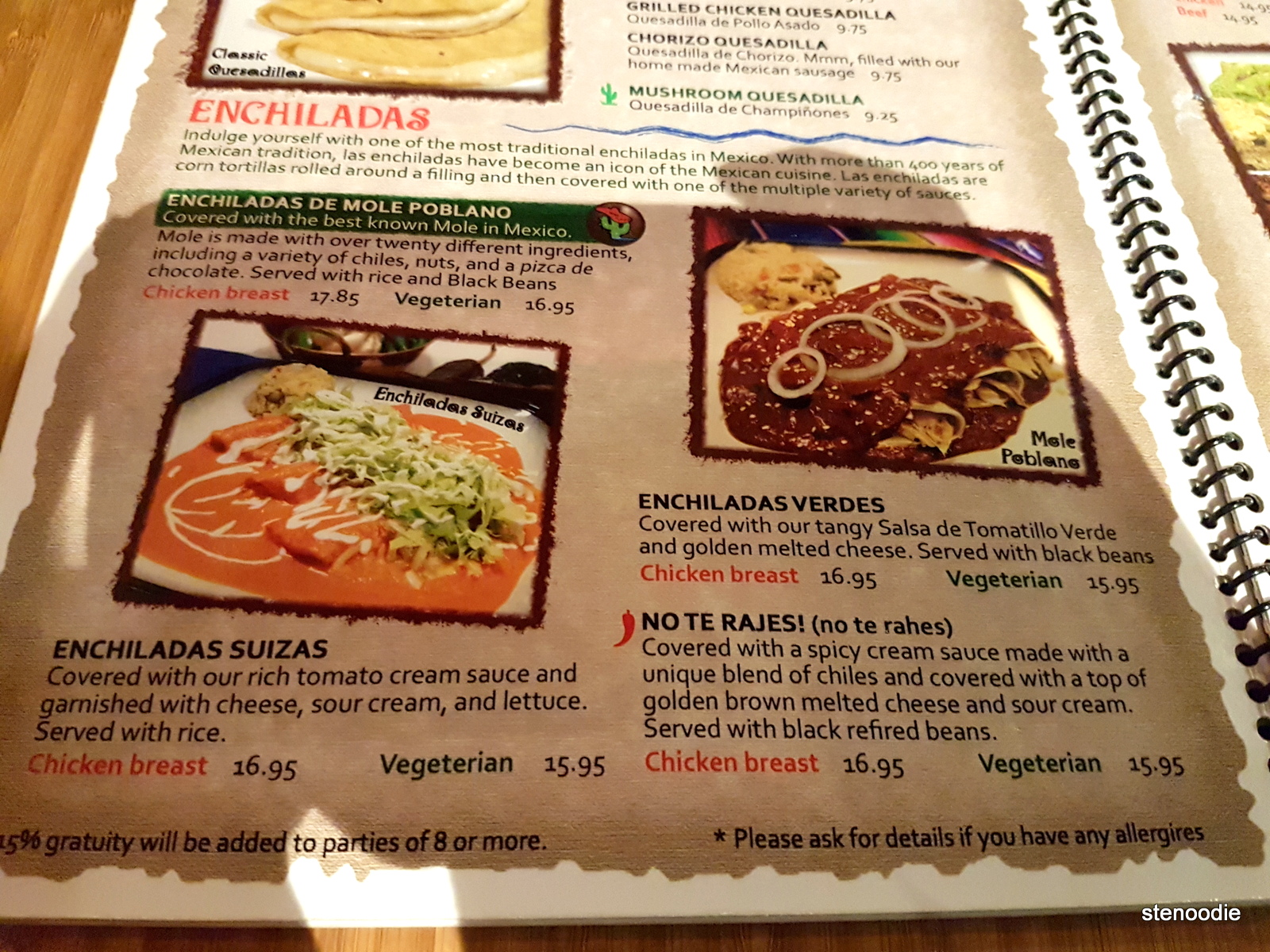 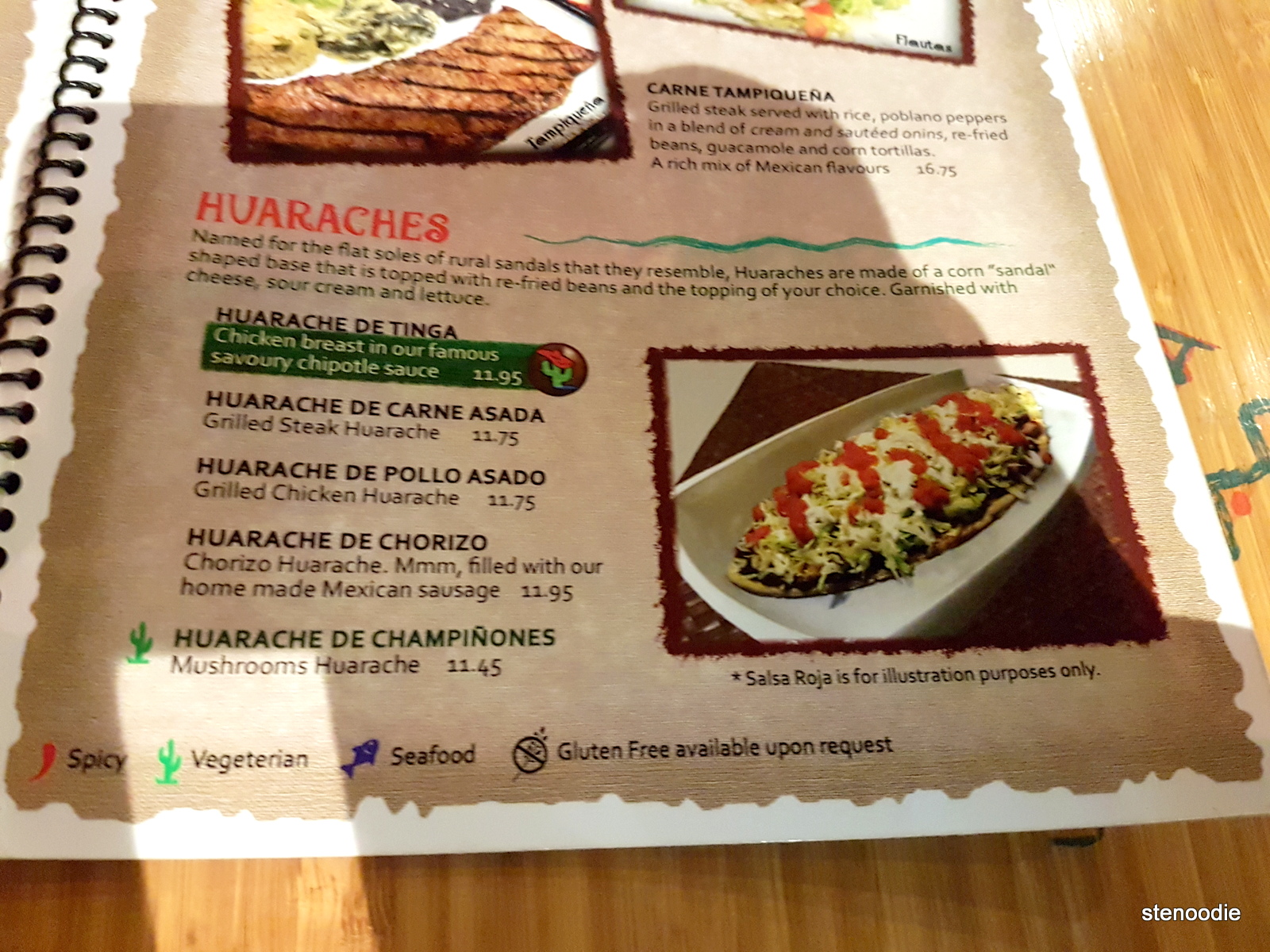 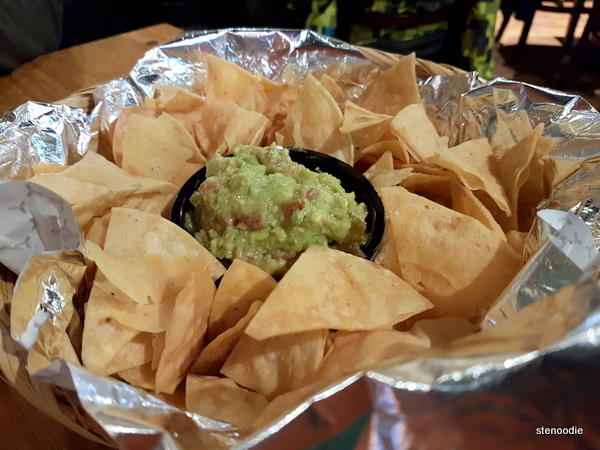 As I returned from the restroom back to our table, the same staff member asked me if I had had mole before.  I said “no.”  He asked me that because mole can be an acquired taste since it’s made with a pinza de chocolate and not everyone enjoys it.  (Mole is made with over 20 different ingredients, including a variety of chiles, nuts, and a pizca de chocolate.)  He asked if I wanted a sample of it first before the dish was served and I was happy to do that.  I really appreciated that actually.

A few minutes later, he brought out a container with mole in it and some tortilla chips for sampling.  The mole was musky and a bit spicy, but I didn’t detect much sweetness from any chocolate actually.  It was definitely a different sauce than what I’ve tried before but it wasn’t unpalatable and I gave him the okay to go ahead with the dish. 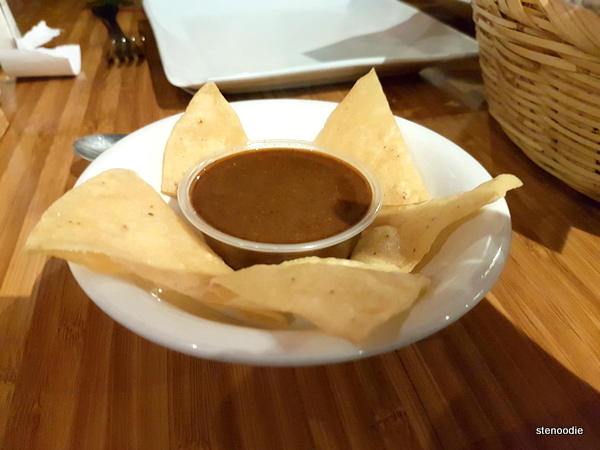 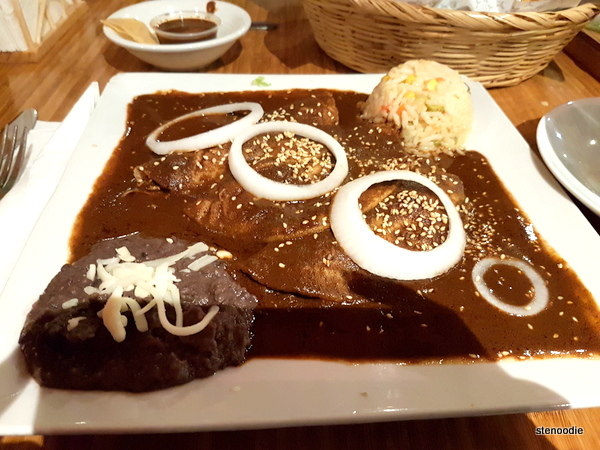 When the Enchiladas de Mole Poblano arrived, it was a large square plate with three enchiladas on it with a scoop of rice and a scoop of black beans at the opposite corners of the plate.  The mole was spread over the entire plate.  Unfortunately, I had asked for the vegetarian version and the chicken breast version was given to me.  I informed the staff member who apologized profusely and then a few minutes later produced the correct vegetarian version to me.  (I really am trying to include more vegetables/eat less meat in my diet.) 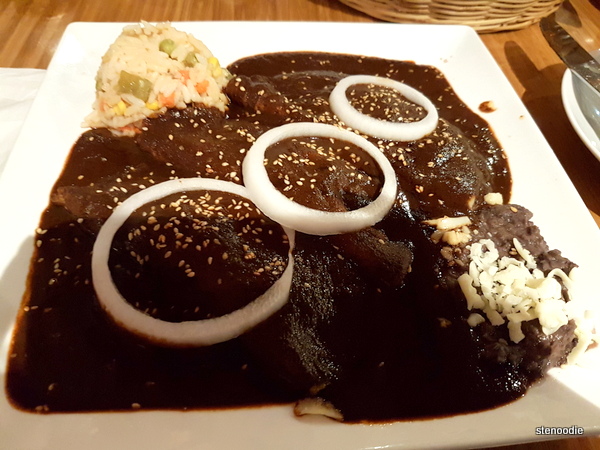 I found that the mole sauce in the dish was actually more concentrated than the sample that was given to me (probably because it was cooked a bit more).  It was slightly heaty and still the sweetness of any chocolate evaded my taste buds.  I enjoyed the very comforting meal.  Within the enchiladas was actually black beans.  I had expected mushrooms or lettuce folded within it since it was a vegetarian version actually, so the black beans were a surprise but they made sense since it was a Mexican restaurant and black beans are so prevalent in their dishes.

I enjoyed the refried beans at the corners of the dish and also the rice.  Ken actually enjoyed the rice the most out of the whole dish.  XD  I did too.  The rice was a good texture and well seasoned.

(I noticed the portions of the rice and black beans were smaller in the corrected dish and there was one fewer onion ring.  XD  I liked the spiciness of the raw onion rings.) 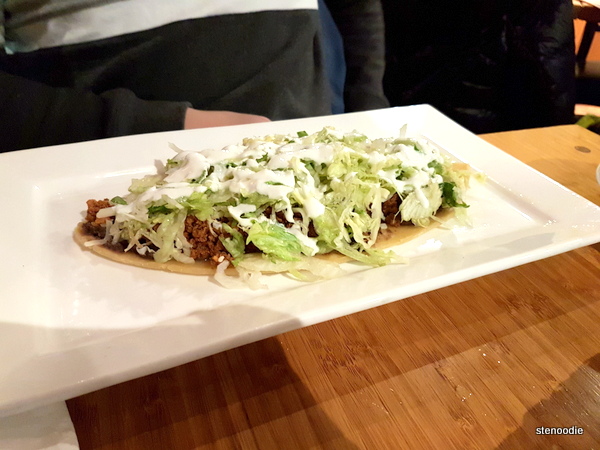 My date ordered the Huaraches dish, a corn “sandal” shaped base that is topped with refried beans and a topping of your choice.  It was further garnished with cheese, sour cream, and lettuce.  Accordingly, this dish is named for the flat soles of rural sandals that they resemble.  This dish intrigued me too since I had never seen it before.  Ken ordered the Huarache de Chorizo which was the huarache topped with the restaurant’s home made Mexican sausage.

The portion was a bit smaller than I anticipated, but still enough for one person.  I wasn’t a big fan of the corn base since it tasted in between the texture of mushy and hard.  The chorizo was mashed up and blended in with the lettuce and cheese.

There was a DIY sauce station too where you could fill up three plastic containers with the sauce of your choice to go with your meal. 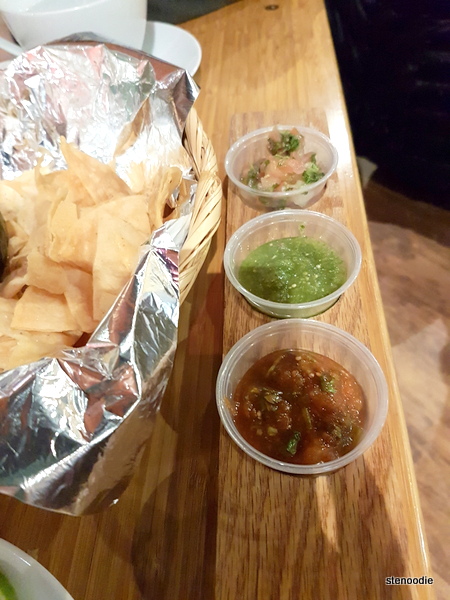 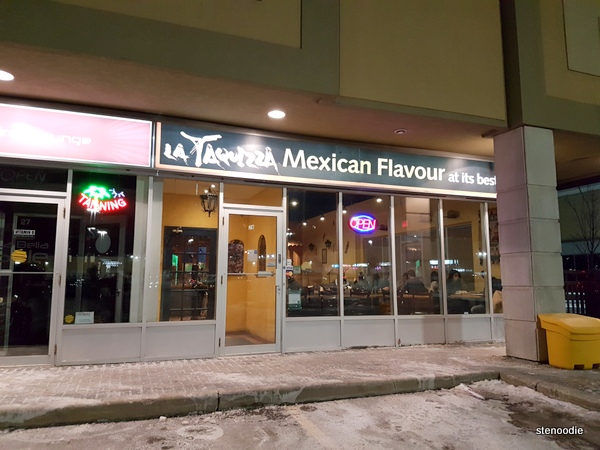 One of the highlights at La Taquizza Restaurant & Tequila Bar was the warm and friendly staff member who made sure we were satisfied during our entire visit.  The food was really good as well.  I don’t eat Mexican cuisine enough, so every time I do, it’s fun to try something new on the menu.  In any case, every Mexican restaurant also prepares the dishes a bit differently too.  It’s a good experience to try them out.