A Milestone and a talk on #Hashtags

A year ago, I would never have thought that I’d be speaking publicly in front of over 300 young entrepreneurs at the North York City Hall.  It’s so interesting to see where life takes you, and so far on this journey, I’ve been honing my communication and public speaking skills.

I’ve always loved public speaking but am always shy about it.  With the right topic, preparation, and practice, I can do it.  I just need to make sure I’m pumped up and nervous enough beforehand otherwise I will be nervous and stumbling during the presentation. 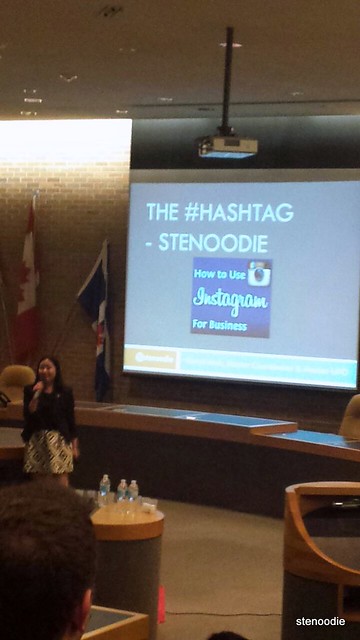 My segment was on using hashtags! 🙂

This was not the first time that I had spoken in front of so many people, per se, but it was definitely the first time I had everyone’s attention for a full 5-8 minutes.  The previous times that I spoke was only for two-three minutes on my personal reflections of the trips that we took.  This time, I had a full topic to myself and I kind of had the reins on what to talk about.  The slides were my own, and the pictures were of my own choosing.

It was a fun night and what a rush it was after the presentation!  You feel like you’re on top of the world.  I wish more people took on public speaking and weren’t so afraid of it.  People think that they’ll make a fool out of themselves or say the right thing and essentially don’t want to get out of their comfort zones.  Well, if you never get out of your comfort zone, how are ya going to grow?!  You’ll always be stuck in the same place if you don’t do something you’ve never tried.  Don’t be afraid to fail because by failing, that’s when we achieve success. 🙂

Thanks again to MB, AC, and the rest of the amazing crew for letting me share a little bit about my story and showing others that it can be done.  Who would have known I’d be speaking a year ago on a stage like this?  Thanks everyone. 🙂

5 Responses to A Milestone and a talk on #Hashtags