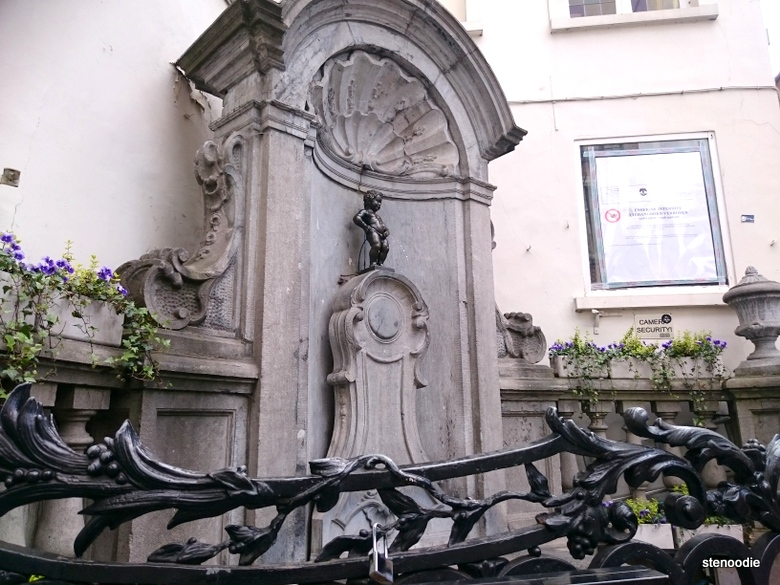 Today was a great day.

Breakfast for the second morning in a row at the Hampton Hotels continental breakfast lounge.

Selection was the same as yesterday with the exception of mini muffins instead of the mini donuts.  Yum! 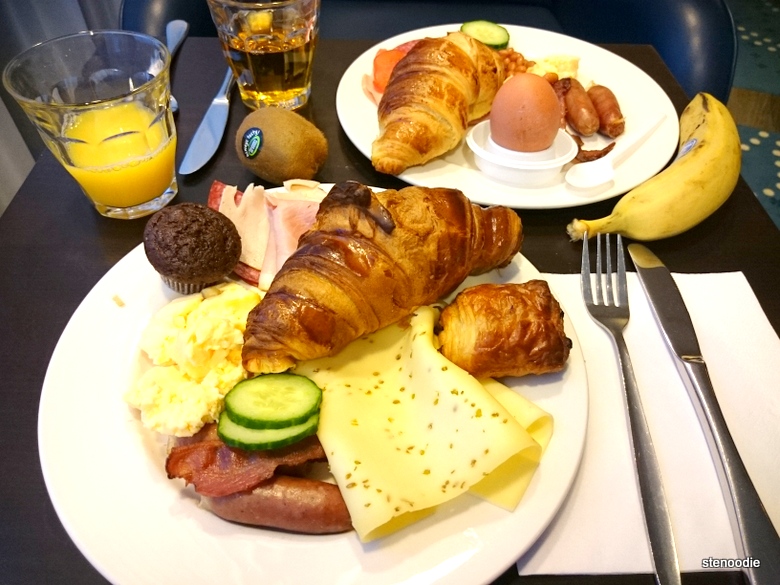 There were a lot more people here today than yesterday.

I also got to try the waffle machine today and it tasted so great and crispy on the edges. 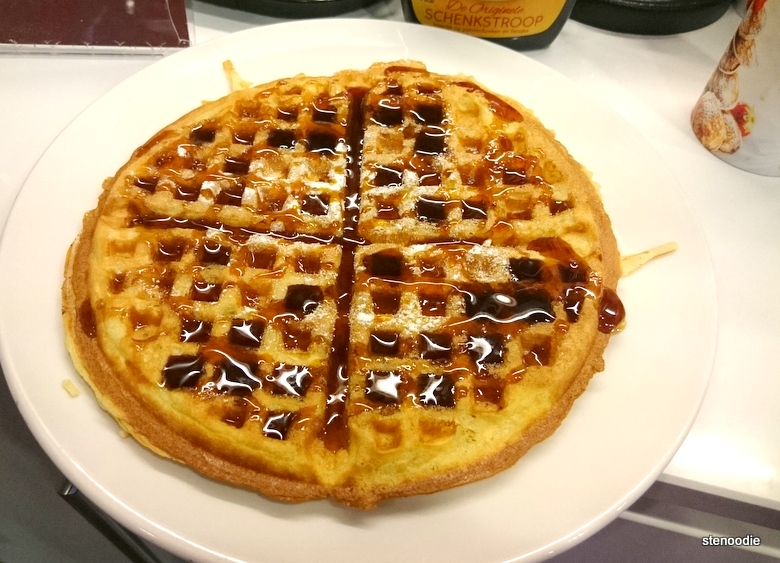 Making my own waffle! 😀

We left 15 minutes later than usual today so I got to enjoy breakfast with Snapchat too haha.

Just as we were in Amsterdam for two days, we drove to Brussels, Belgium instead.

After two hours in the bus (we all passed out), we arrived at a pit stop where the €50 cent ticket to the washroom again resulted in a voucher.  I bought a waffle to try. 😀 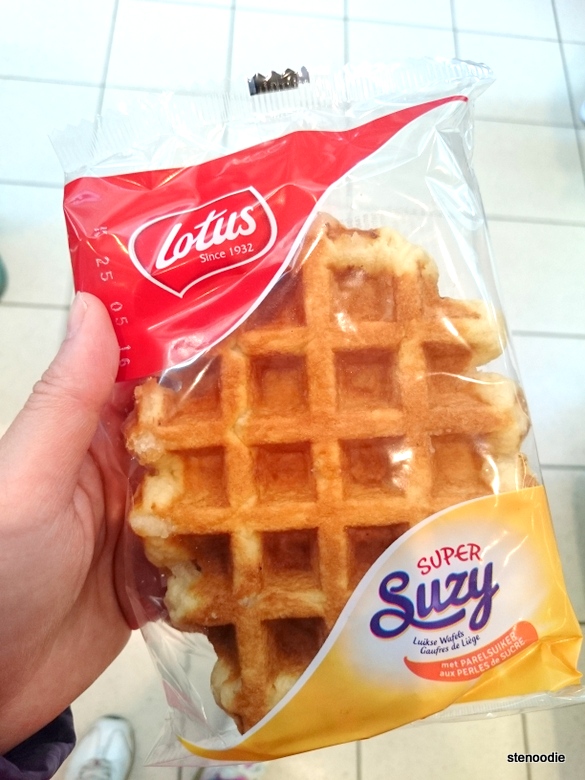 After that, about 40 mins, we arrived at one of Belgium’s tourist spots, the Atomium. 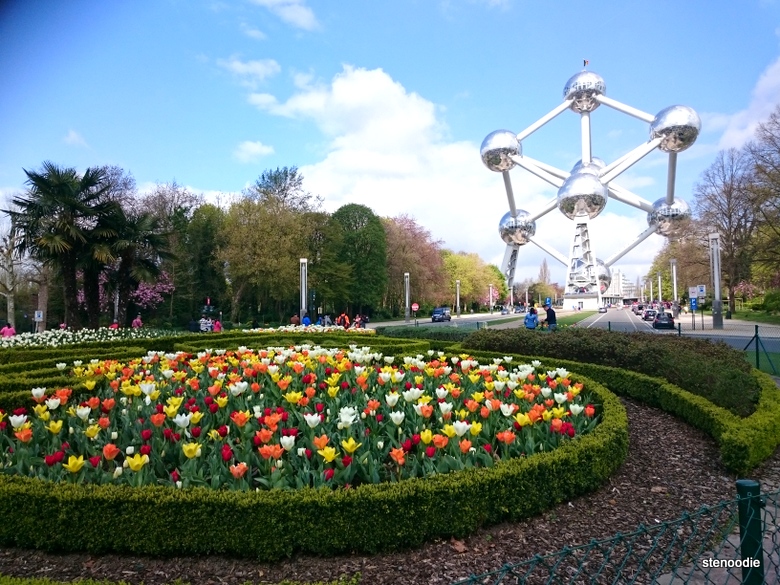 The Atomium in the distance

We really just looked at it from afar and took pictures.  The Atomium contains nine separate capsules that you can enter.

We took some group jumping shots too.  So fun haha 😀

Then we arrive at the city centre of Belgium and walked around. 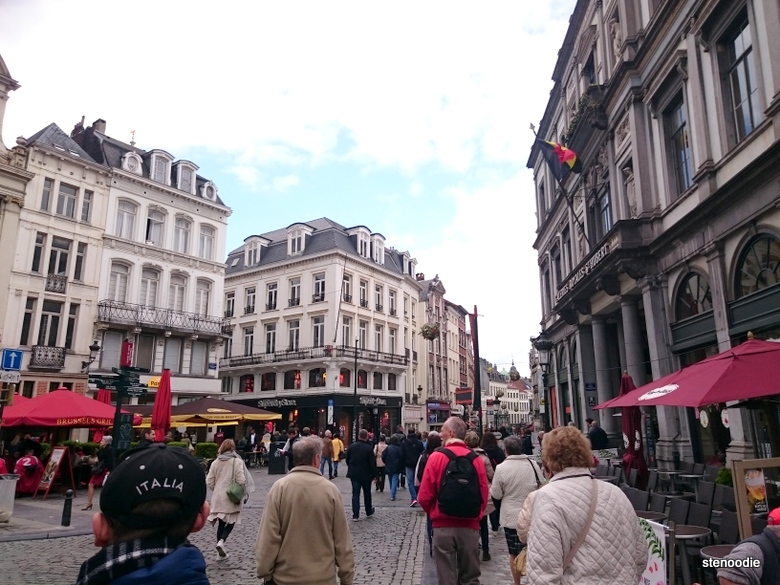 The Galeries Royales Saint-Hubert or Koninklijke Sint-Hubertusgalerijen is a glazed shopping arcade in Brussels. 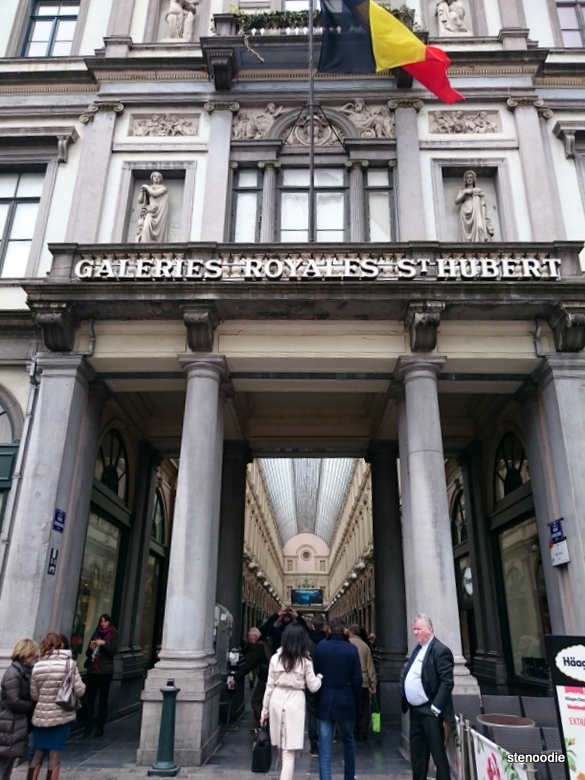 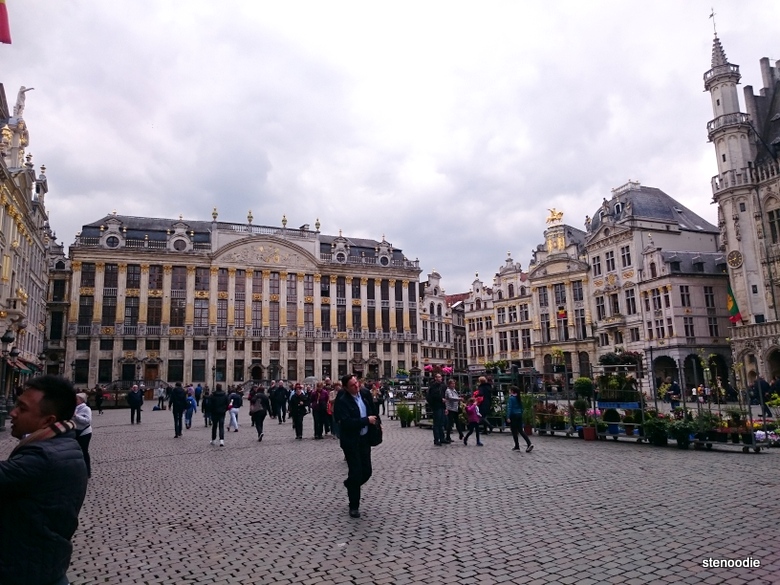 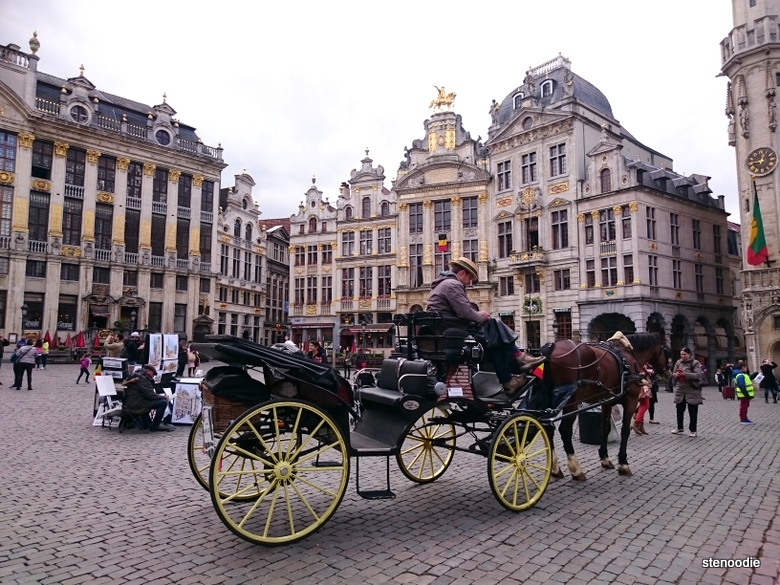 Really hard to capture it all on photos 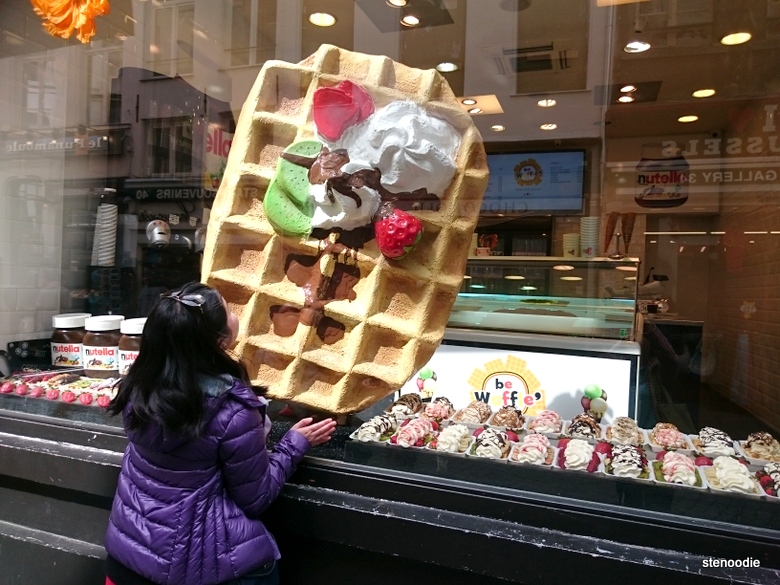 Haha, saw this huge waffle in front of a store :p

The tour guide showed us to Rudolf Braun where we tried some authentic Belgian chocolates.  Yum!!  Sooo good.  I must have taken at least 10 haha. 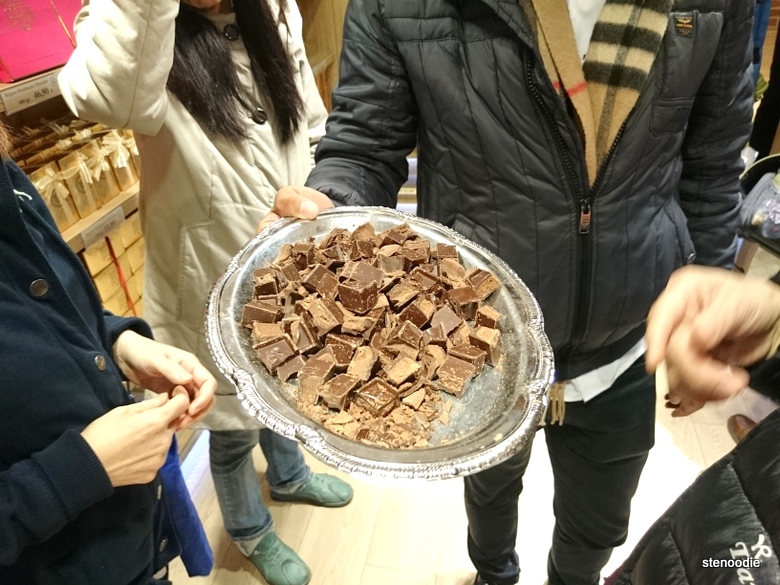 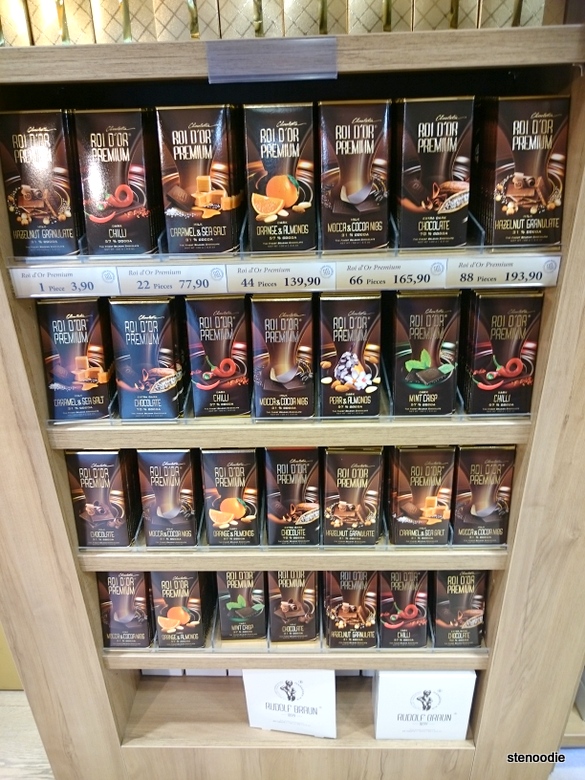 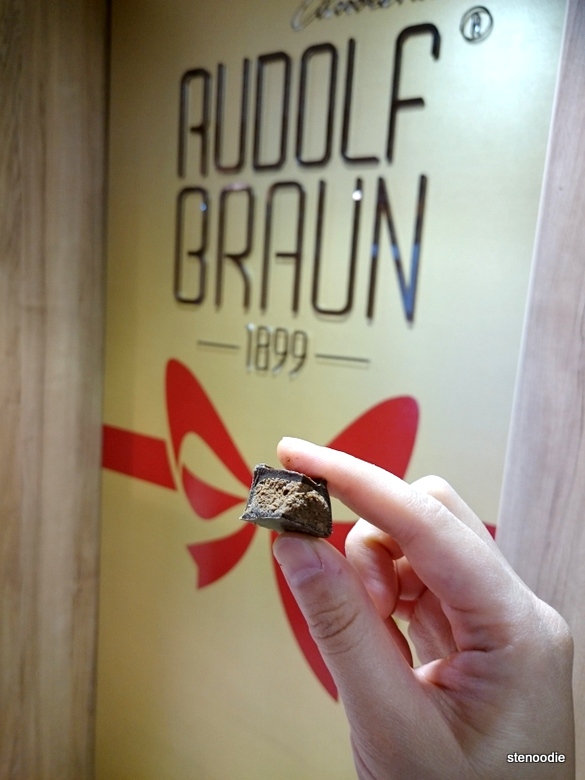 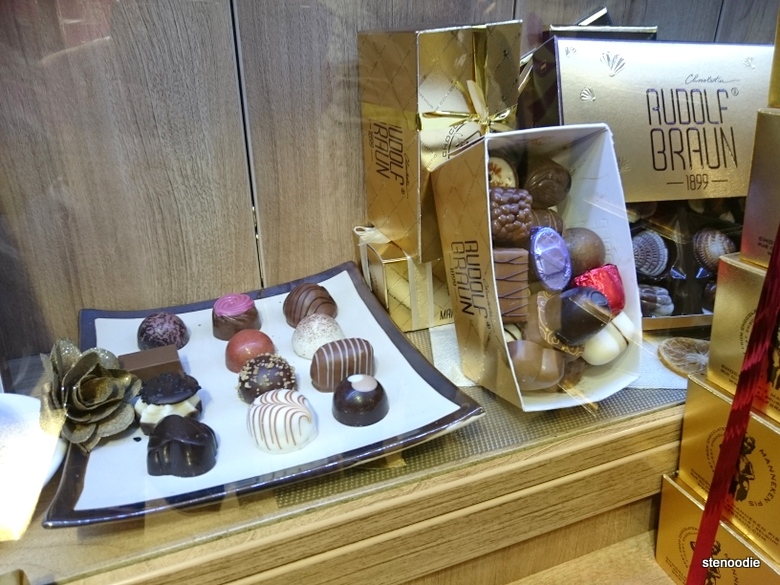 We all bought chocolate since it was 8 boxes for €80 and two boxes of truffles for free.  Yay. 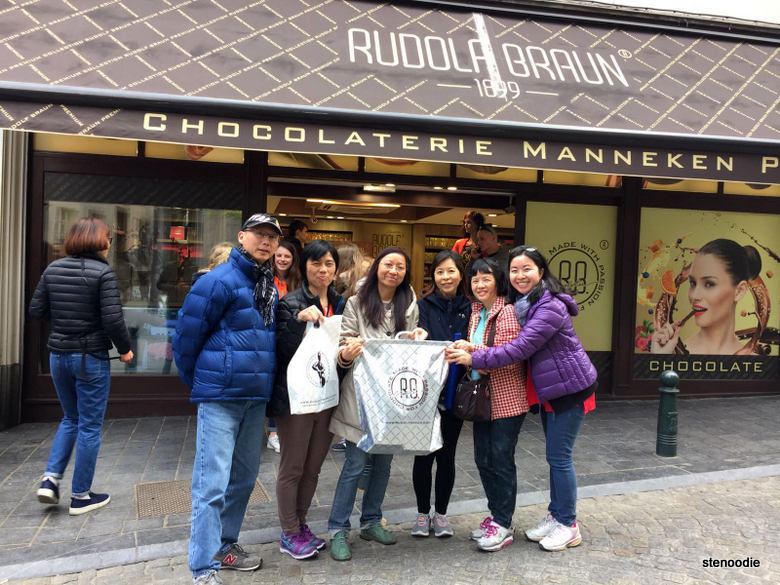 Photo in front of Rudolf Braun

We saw Mannekin Pis, the peeing boy fountain/statue.  The origin of the peeing boy statue is from here.  I remember the first time I got introduced to this sculpture was when I went to the Window of the World in China. ^_^ 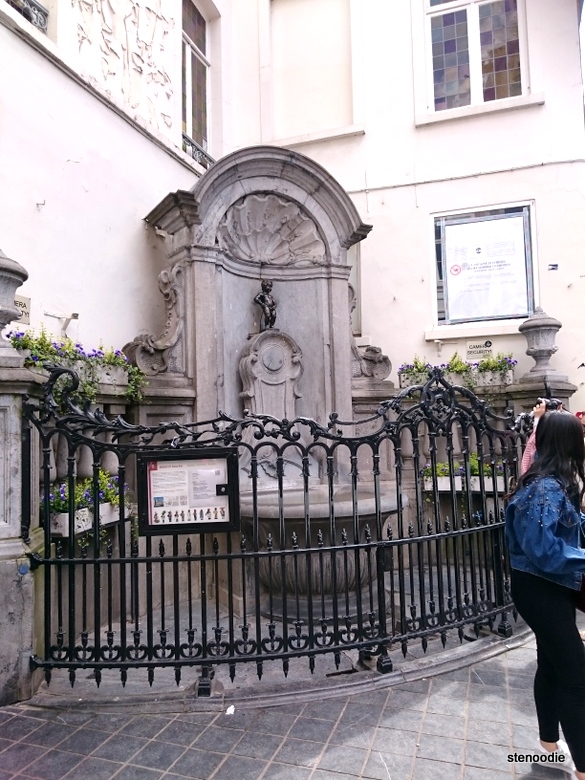 Mannekin Pis in all its glory — no pun intended 😛 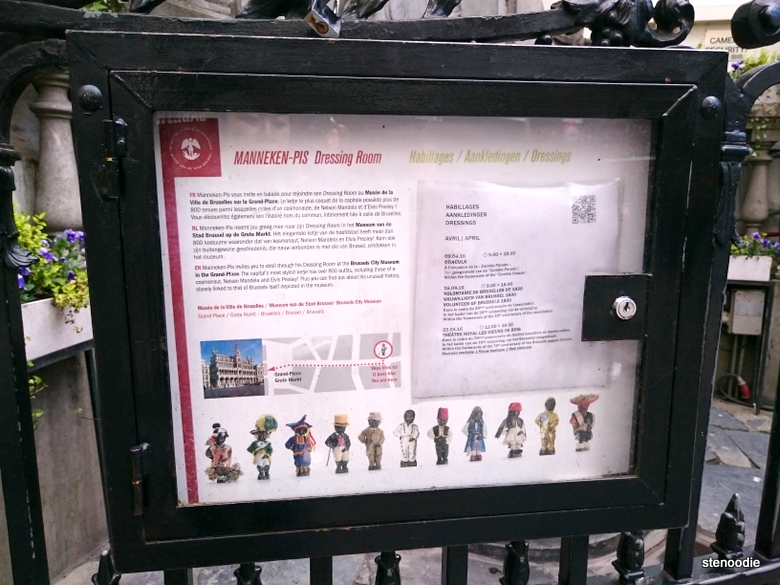 It gets dressed in different costumes but on our visit, it was bare-bottomed 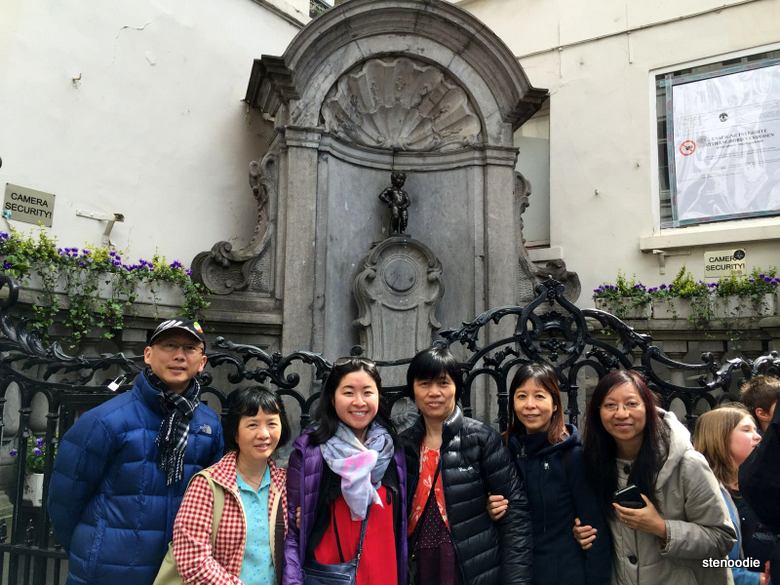 A must-visit in Brussels! 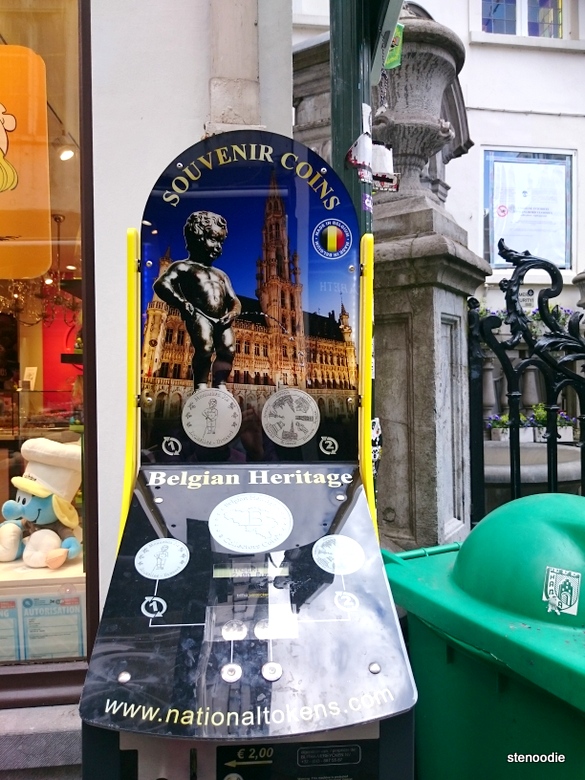 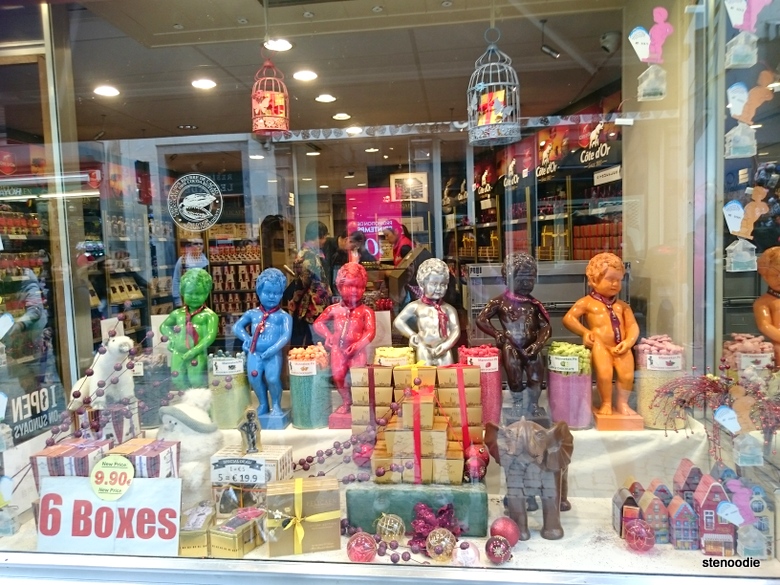 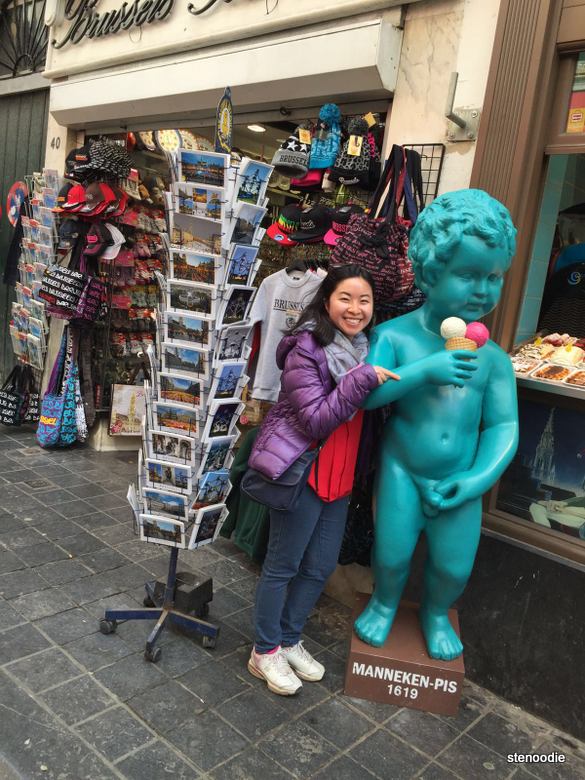 Next up, we went for lunch. Belgium is well known for their mussels and fries combo, so we walked into an alley that was full of seafood restaurants and picked Le Calalou to try. 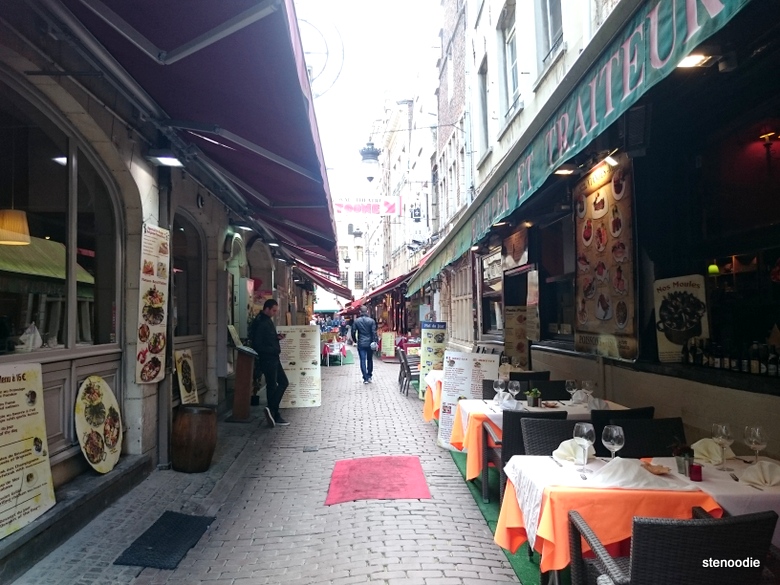 Alleyway of seafood restaurants in Brussels 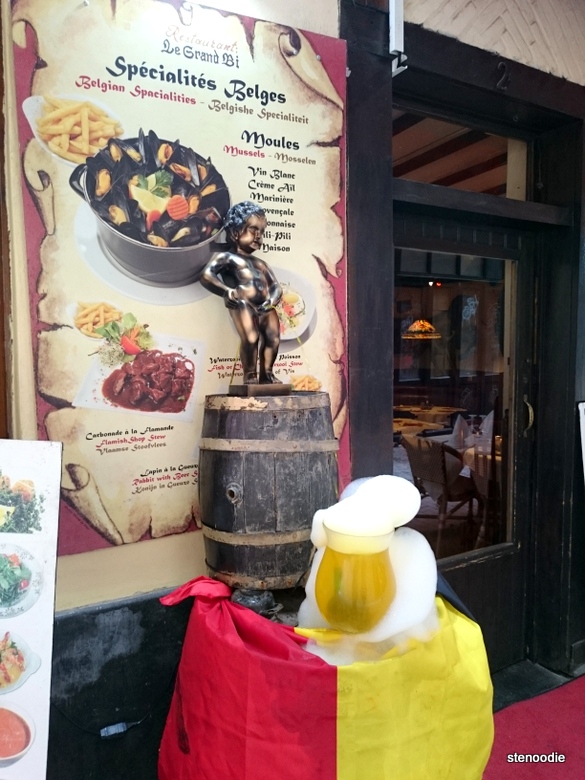 Saw this in front of one of the restaurants 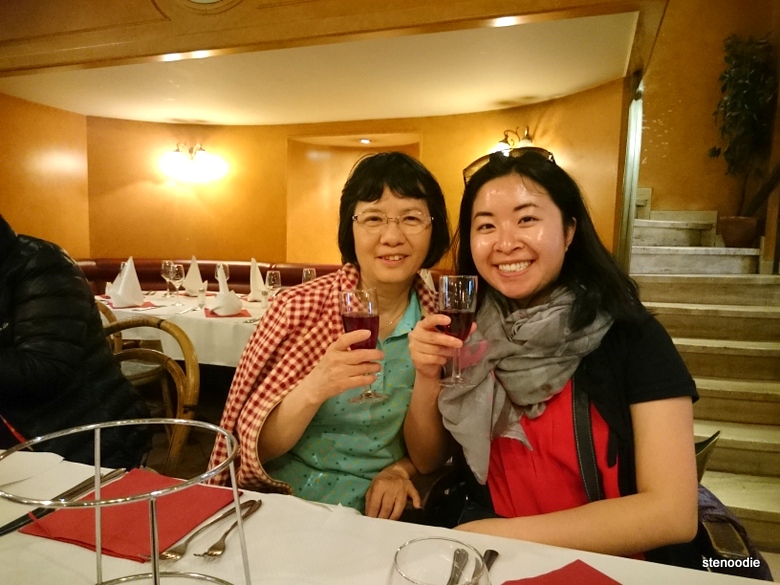 Click here to read the full review and experience of our lunch at Le Calalou.

We ate quickly and then met up at 3 p.m. to return back on the bus.  Before that, I quickly dashed into the nearest cafe that sold waffles to get one for myself to try.  How can I go to Belgium without trying their famous waffles?

Click here to read about the waffles I got from Ijsberg!

Next, we were on our way back to Paris (we didn’t even spend a full day in Belgium).  The trip took about three hours but I didn’t sleep during the whole trip surprisingly. 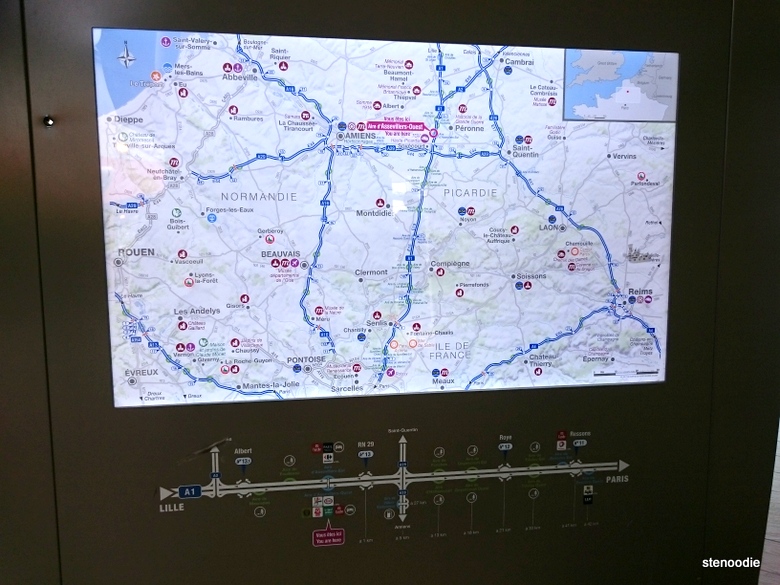 Map during our pitstop back to Paris

After a pit stop where we bought some French snacks for friends and family, we arrived back in Paris.

Unfortunately, we were set to stay at the same hotel as we did on the first two nights.  This time, I got the shorter end of the stick because our room only had one plug outlet, an incredibly tiny shower with a too-high shower head, and weak wifi signal. …sigh.

We settled in with our stuff and then walked out to find dinner.  After considering two other restaurants on the street, we settled on a Japanese restaurant. 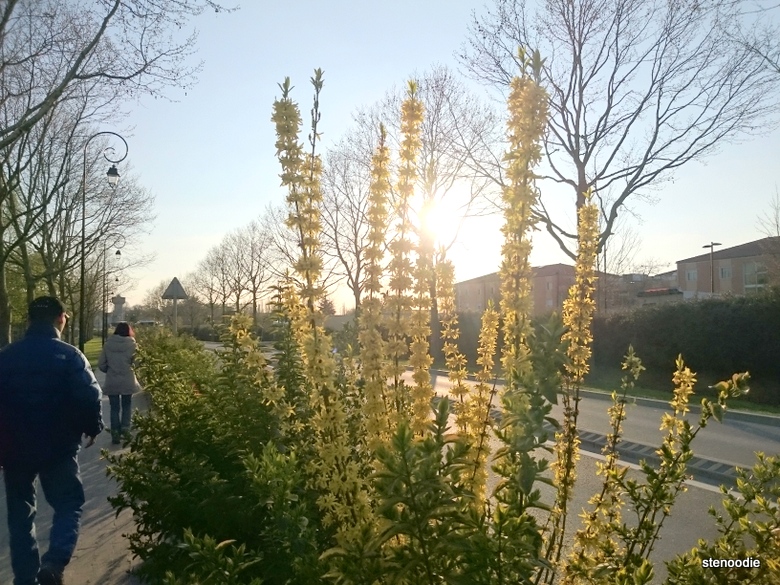 Walking out to find dinner 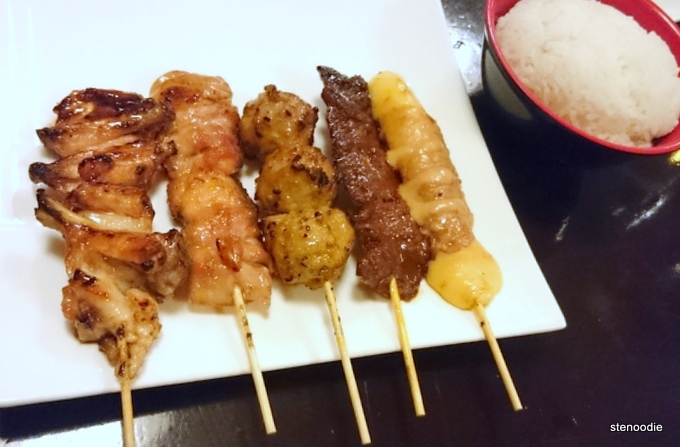 Click here to see what we ate at SushiRama for dinner.

Then home (aka the hotel)!  I will have to make do with what I have at this hotel but showering was definitely inconvenient and the first time I’ve had to a cup to hold water to shower.  XD

Tomorrow is our last official touring day in France.  Time to finally see the Eiffel Tower and Versailles.  Excited!! 🙂

View my posts from the other days of the trip:

I'm a stenographer, foodie, avid traveller, and new mom who loves to share her experiences with the world.
View all posts by stenoodie →
This entry was posted in Travel and tagged Brussel city centre, Galeries Royales Saint-Hubert, the Atomium, Touring Brussels Belgium, travel blog, visiting the Manneken Pis. Bookmark the permalink.