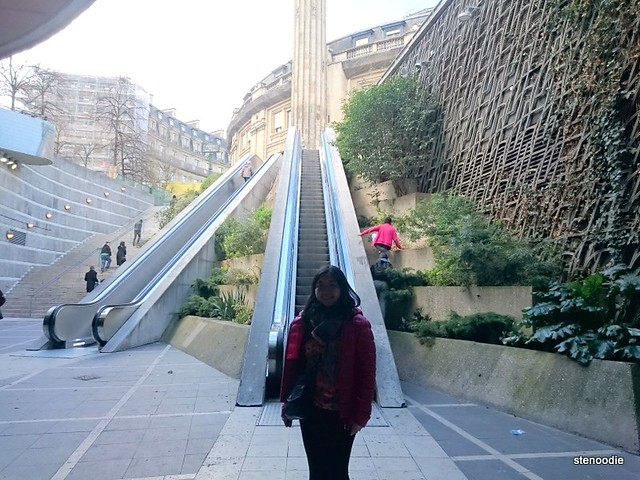 Loving my first day in Paris

Yay!!  I love how for this trip, I didn’t have to wake up super early to take the flight as our flight to France was at 7:40 p.m. in the evening.  Most of my travel plans usually start so early in the morning.

After stuffing in the last item I would need before closing the luggage right before we left (figures.. I do last-minute packing all the time) and blogging as much as I could to pre-schedule, we were off 3 hours early to Pearson International Airport! 😀

(What else did I do before boarding other than blog haha) XD. 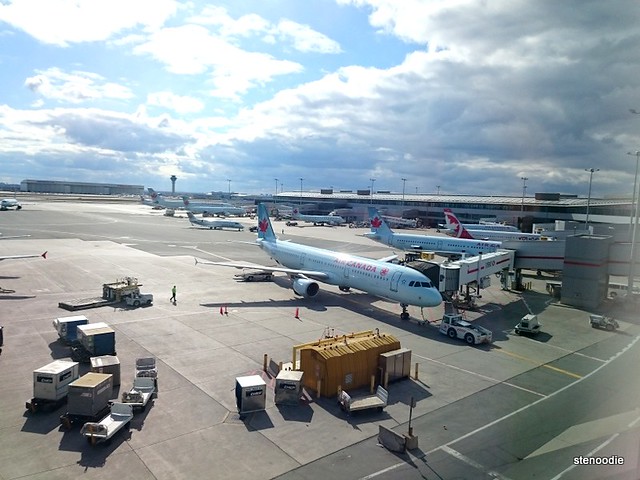 It was a beautiful April evening to fly 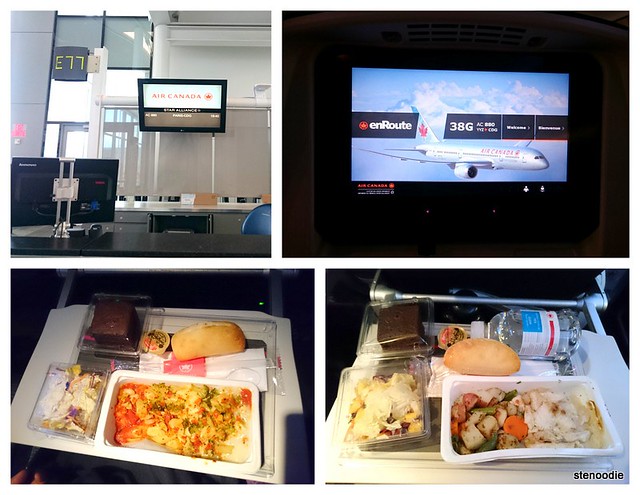 YYZ to CDG. Yay! My first time to Paris, France! The in-flight meal was delicious. I loved that chocolate cake!

The flight from Toronto to Paris was about 7 hours.  I spent it trying to sleep and eating their in-flight meals.  It was so hard to fall asleep!

After 7 hours, arrival in Paris! The weather outside was sunny and a little breezy

Arriving there at 8:30 – 9 a.m. in the morning, we met up with the representative from Tian Bao Tours who was going to pick us up.  Luggage didn’t take long to retrieve and customs was fast and trouble-free.

The drive to our hotel (where we would be staying for the first two nights) took only 10-15 minutes from the CDG Airport.  Our hotel, Comfort Hotel Airport CDG, was located out in Le Mesnil-Amelot, a farmland area with little to see.  (I have blogged about the hotel experience here.)

After checking in and refreshing ourselves, we took the hotel shuttle back to the Airport (where there was a train system) that would take us into the city. 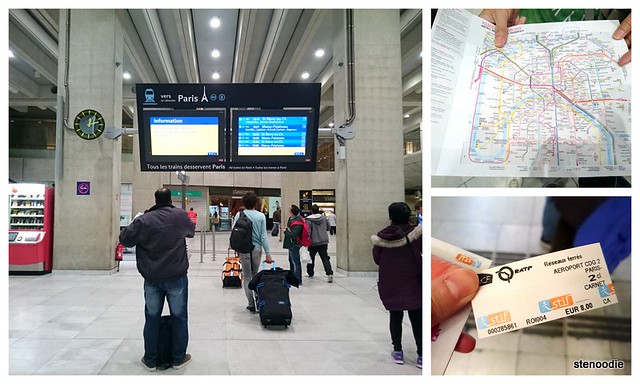 Navigating through the Paris trains and using an old-school map. That’s the one-way ticket for the train

The ticket procedure was rather straight-forward; we got it from a personnel instead of trying to wrangle with the automatic ticket machines haha. 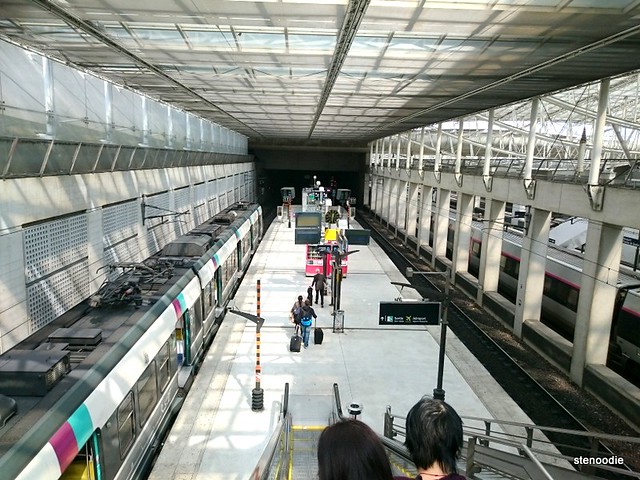 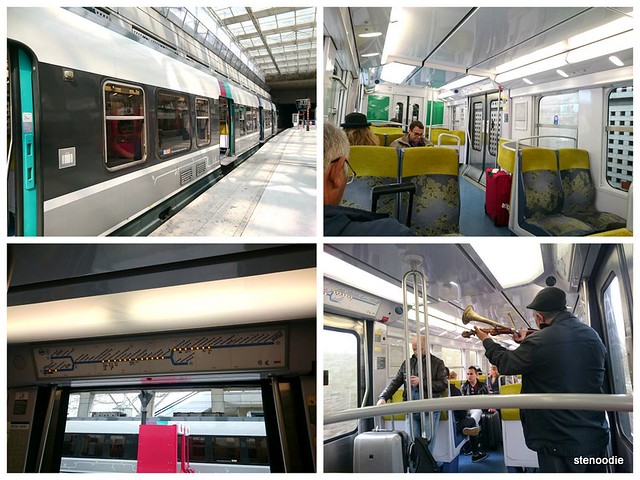 On the train. Their transit is up-to-date with highlighted maps. There was a subway performer too

Their train system is much larger than that of Toronto and fairly easy to figure out.  Our trip to the Châtelet – Les Halles train hub (major commuter train hub in Paris and the largest underground station in the world) took around 15-20 minutes.

We had arrived at a shopping mall, Forum des Halles (the largest indoor — mostly underground — shopping mall in central Paris).  Our first priority was food!  Lunch!

After scoping out the mall and viewing different sandwich shops and cafés, we decided to eat at Pomme de Pain (their sandwiches looked great in the display case).

We ordered two combos with a drink and fries/pastry and a separate sandwich to share. 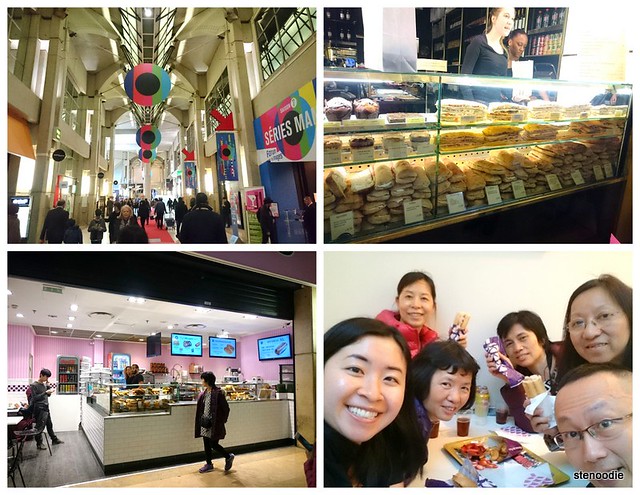 It was really nice to try some French baguette sandwiches and pastries for our first meal in France! ^_^ 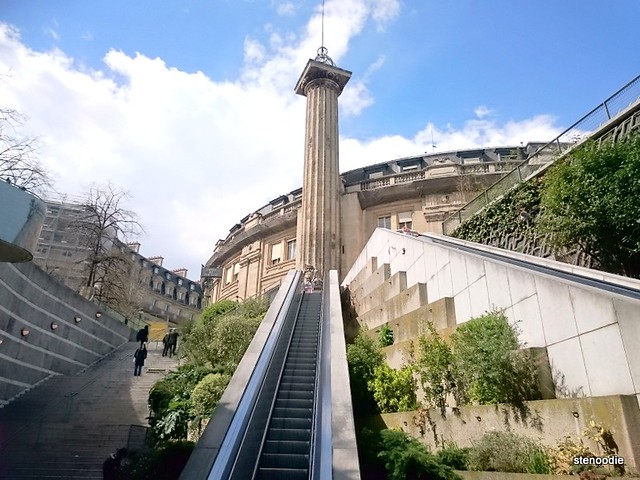 The weather was gorgeous outside! There were some kids on a field trip and a playground in the distance

After satisfying our stomachs, we explored the mall a tiny bit (there was free wifi here) and then went outside to where the beautiful French spring weather greeted us.

This Écoute sculpture caught my eye 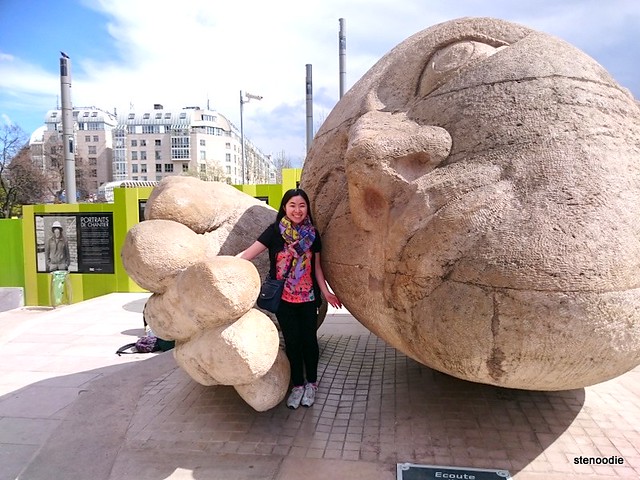 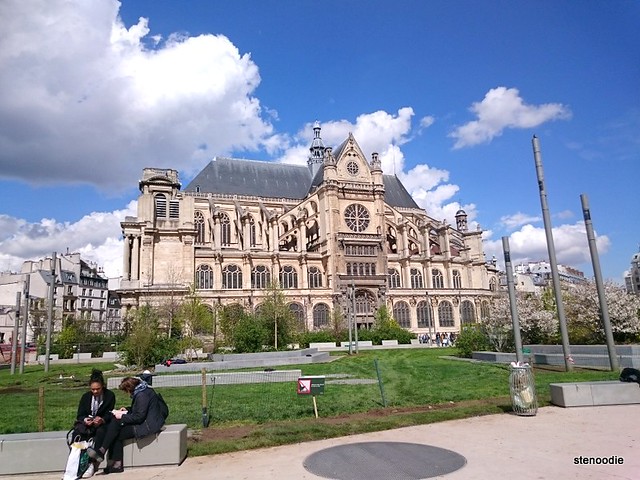 The Saint-Eustache church in Paris

We took some photos at the Écoute (listening) sculpture, the Saint-Eustache church, and walked the surrounding streets.  Turns out we had arrived at Rue Montorgueil, a place where the Parisian locals socialize and do their daily shopping.  There were so many cafés, restaurants, shops, and especially patisseries all along the streets!  Numerous people were enjoying their afternoons solo or with a group in these cafes on the patio.  It was so nice and for a second, it was easy to forget about the pick-pocketing that was common in Paris. 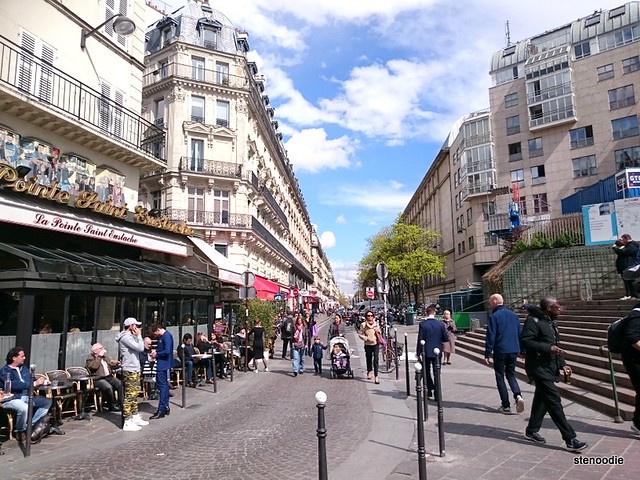 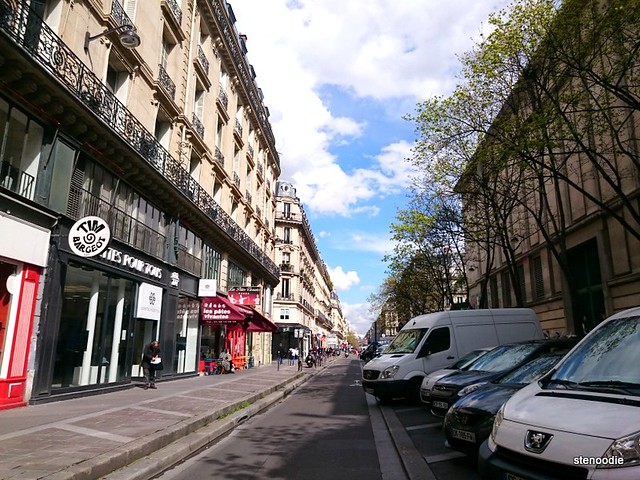 Blue sky and white clouds too 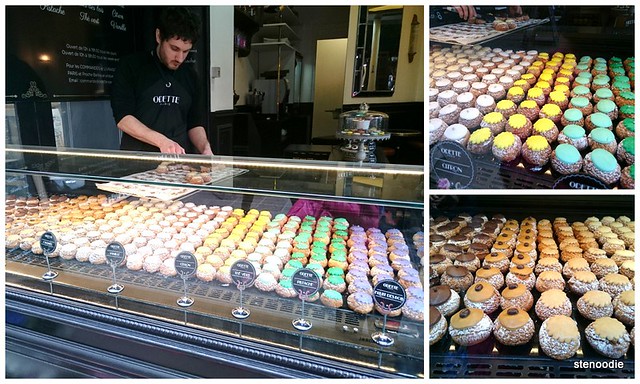 The start of the cafés in Paris. What pastry desserts!! 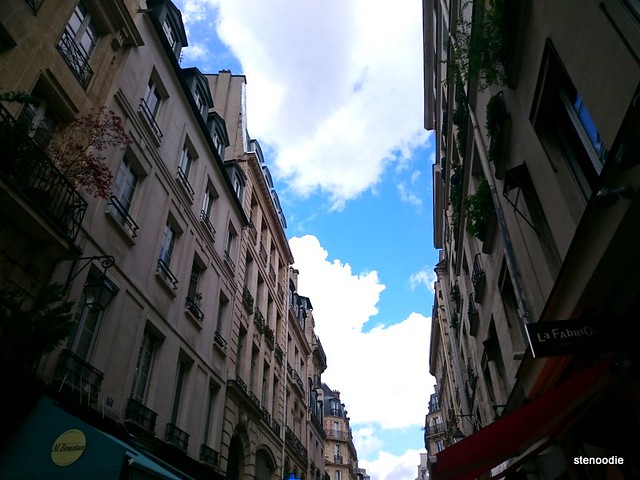 Just look at that sky 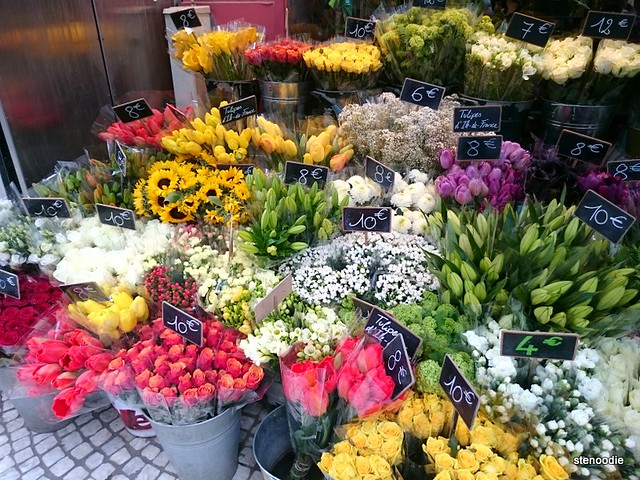 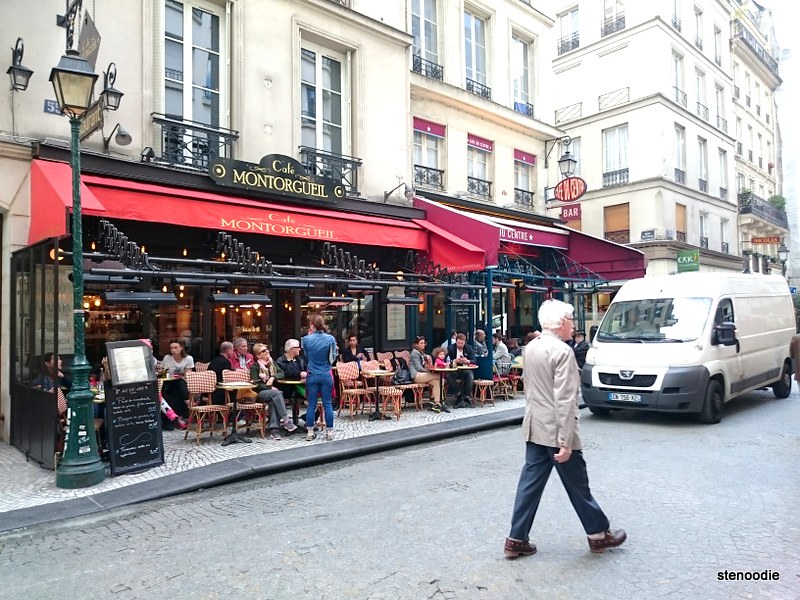 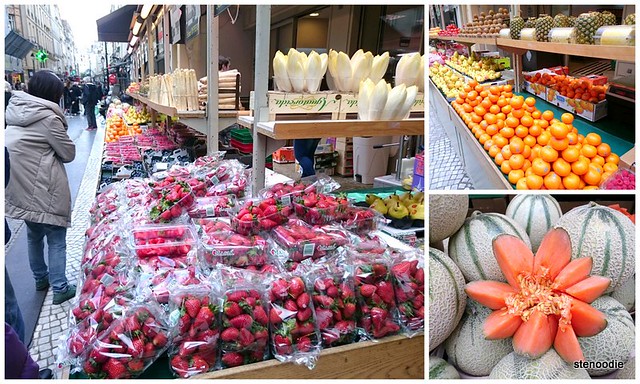 Fresh fruit! We bought a bag of red apples here for 3€ 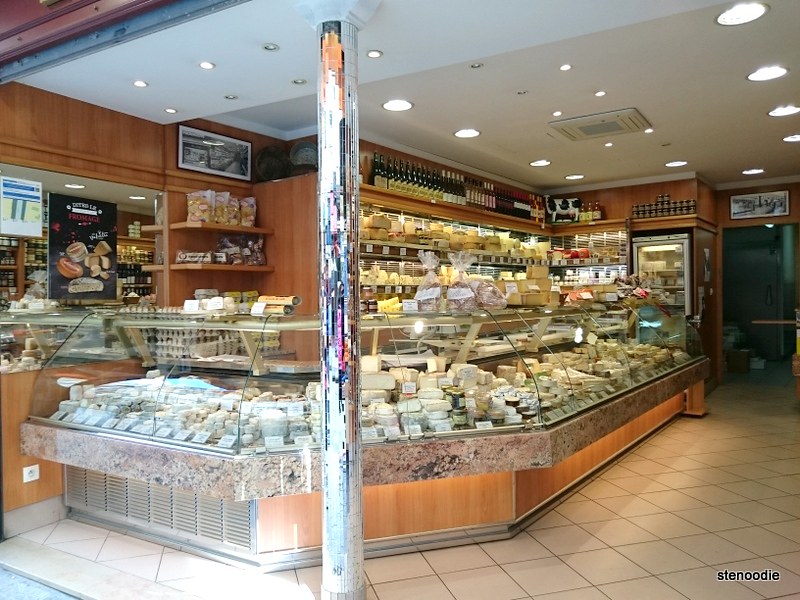 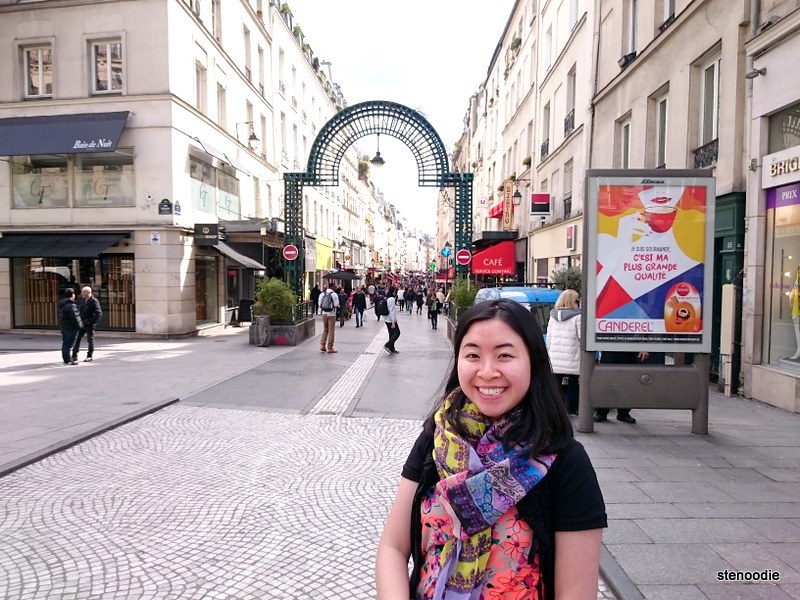 Photo in front of the street at Rue Montorgueil 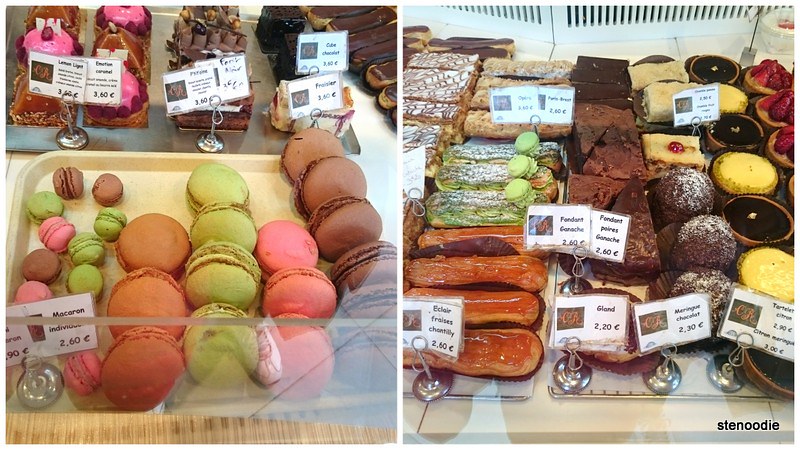 More sweets! This shop was more affordable; hence the presentation of the desserts 😛 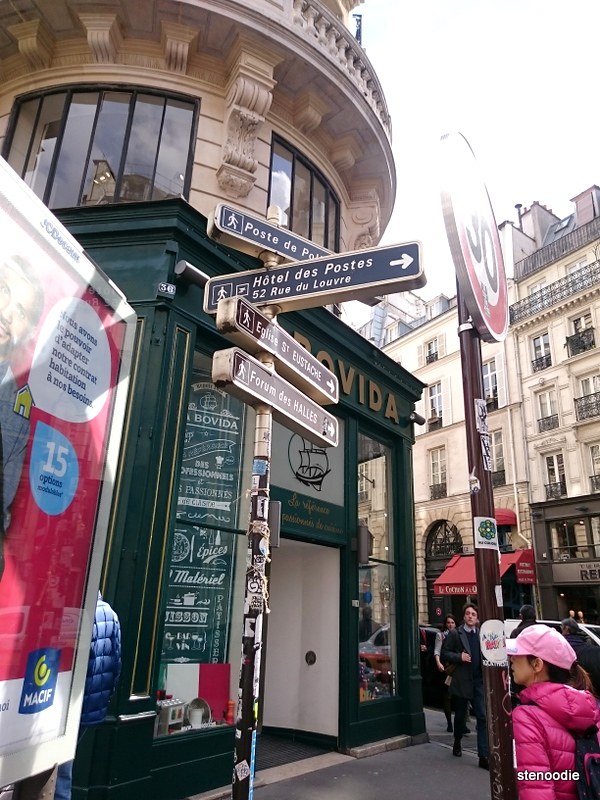 I found it rather amusing that most of the chairs at the cafés had their seats turned out to face the street in an obvious attempt for the patrons to people-watch.  It was so lovely.

After a while of strolling Rue Montorgueil, we were tired and Kerry wasn’t feeling well, so we stopped at one of the restaurants (Bianco Pizzeria — blogged here) we had passed by earlier with the outward facing seats and sat down for drinks.

It was Happy Hour and each cold beverage was buy one get one free.  We decided on having an early dinner too.

After we got our drinks, it started to rain so we had to retreat inside.  So in this case, we got to enjoy the outside patio atmosphere for just a tiny bit before we enjoyed their interior restaurant experience too (orange theme).

The rain didn’t last long at all; only a flash rain.  We finished the delicious Italian food (they had free wifi) before we made our trip back home to our hotel for the night. 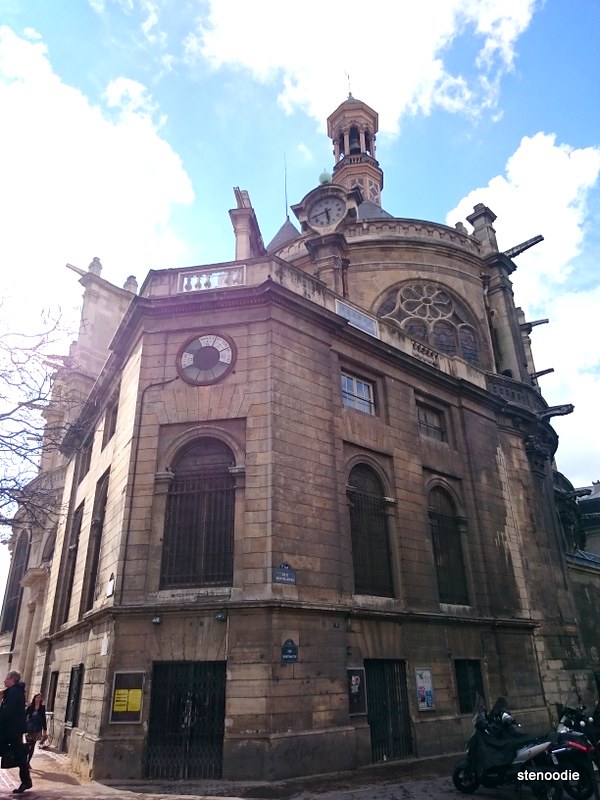 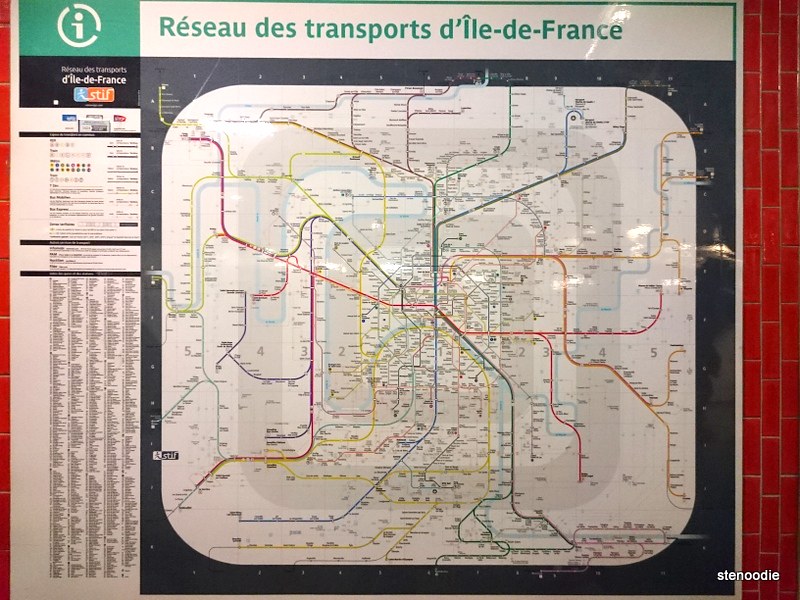 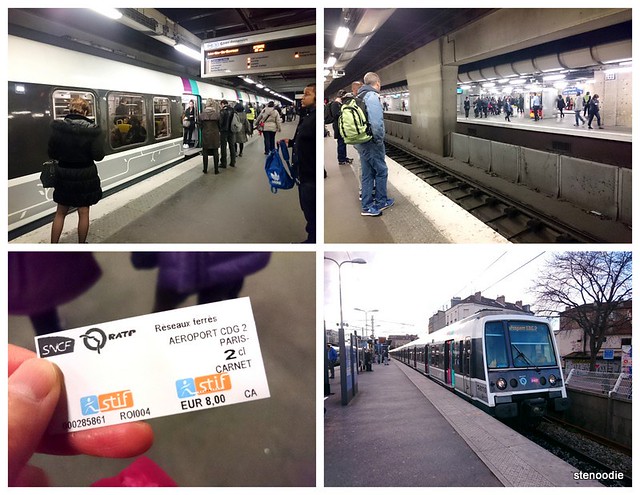 Returning back, it was now rush hour and the train station and trains were flooded with people.  There were specialized staff who overlooked passengers boarding the trains.

We arrived back to the hotel and now the wifi in the hotel was working (yay!).  I was so content with my first day in Paris, France. 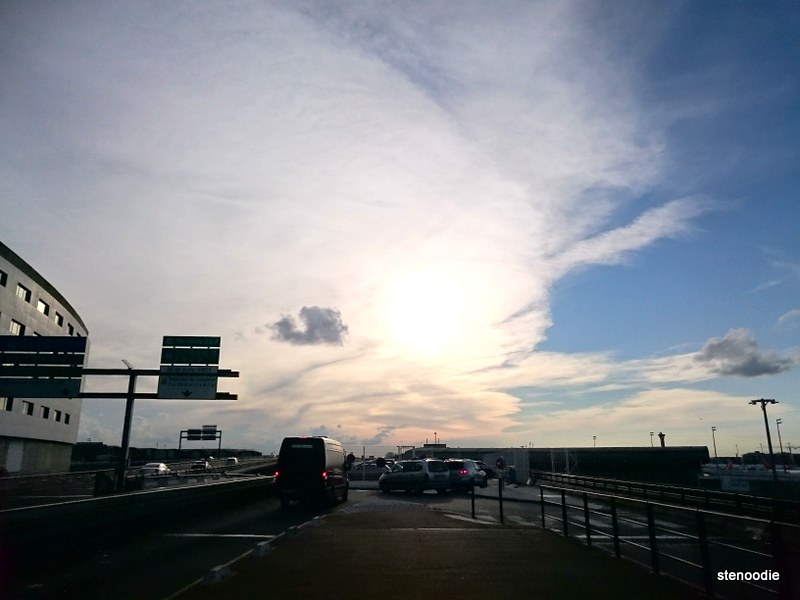 Tomorrow’s adventures continue with the tour group and visiting the Louvre and more of Paris.  I’m excited!! 🙂

View my posts from the other days of the trip: