Yelp Elite Event: “We Are Family at Aunty’s Kitchen” 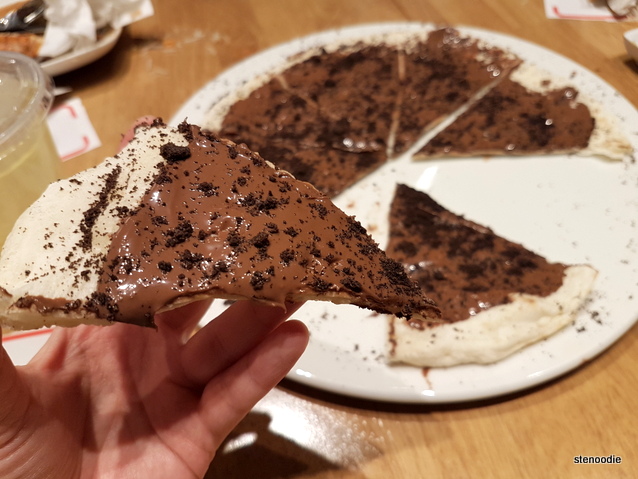 Last night, I had the pleasure of attending a Yelp Elite Event at a new-ish Pakistani casual restaurant called Aunty’s Kitchen in Mississauga.  A Yelp Elite Event is an invite-only event where the organizers of Yelp GTA select Yelp Elite members to dine in on a pre-selected restaurant to celebrate and thank them for their contributions on Yelp.ca.

This was my fourth YEE and I was very thankful to have been selected to be one of the 50-ish people to attend.  I know that not everyone gets into the wait list and that Yelp Elite Events are always put together with flair and perfection.  (The other three events that I attended were also top-notch in terms of quality organizing.) 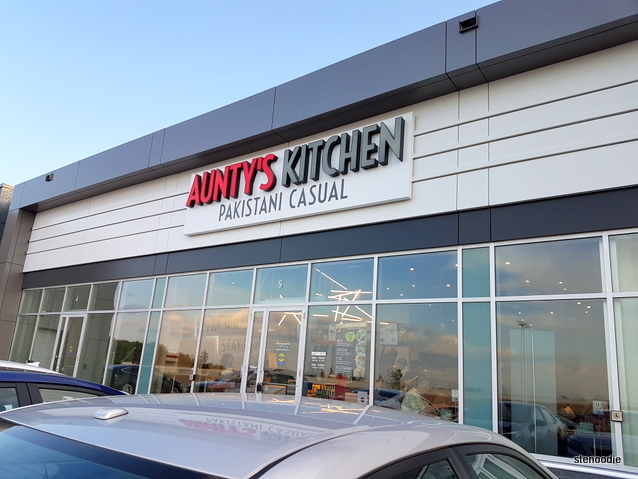 Aunty’s Kitchen in Mississauga. They have opened for about 4 months

The event was slated for 7 to 9 p.m. but unfortunately because Aunty’s Kitchen was located in the west end of the city for me and there was very bad traffic going from Markham to Mississauga that night (there were two crashes that I had to sit in traffic for), I actually ended up being severely late and didn’t get there until 7:35 p.m.  I’ve never been that late to an event before!

Luckily, I made it there safe and sound (which is the important part) and checked in with Kris, the organizer of the YEEs.  He welcomed me with open arms and I was really thankful that the event was organized such that everyone was already pre-planned in tables.  I was at table 4 with three others (two Yelp Elite members and one of their guests). 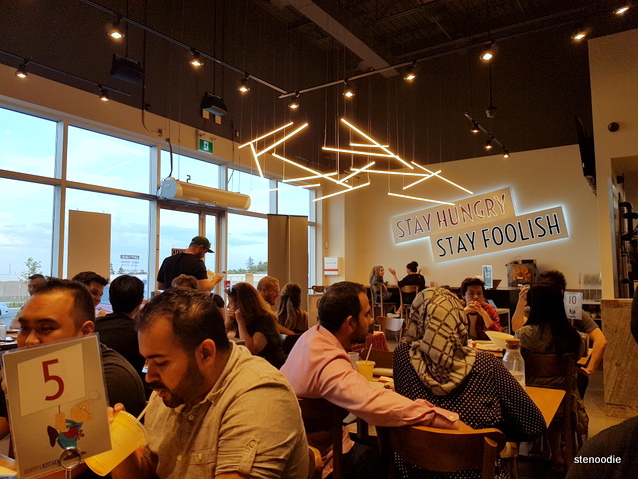 The interior space from my point of view

Upon sitting down at the table, they were just starting their second course which meant I wasn’t missing out on too much thankfully.  Yay. 🙂  We were sharing the food family-style which was a great idea because this meant we could try out many more items that Aunty’s Kitchen was serving us that night.

The first course was a Cheese Naan which my tablemates had very thoughtfully left two pieces for me.  I was really thankful for that because they could have finished it all — they didn’t even know me as we were all strangers.  Thus, I got to try the cheese naan.  It was very thin and the texture was good.  There were three dipping sauces on the table too — a garlic sauce, spicy mayo, and spicy tomato sauce.  I liked the garlic sauce a lot since it was so fragrant. 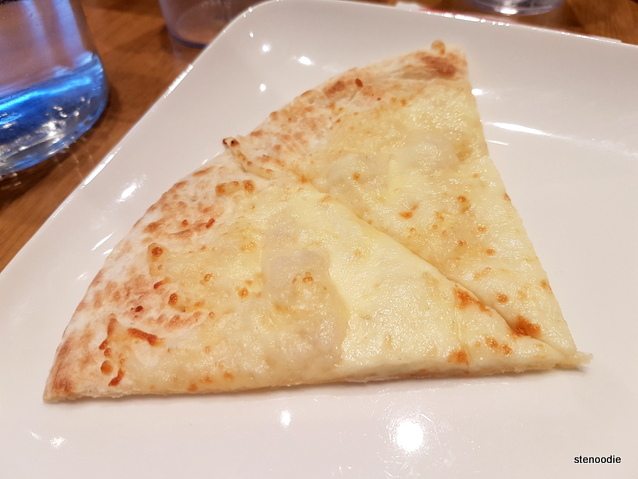 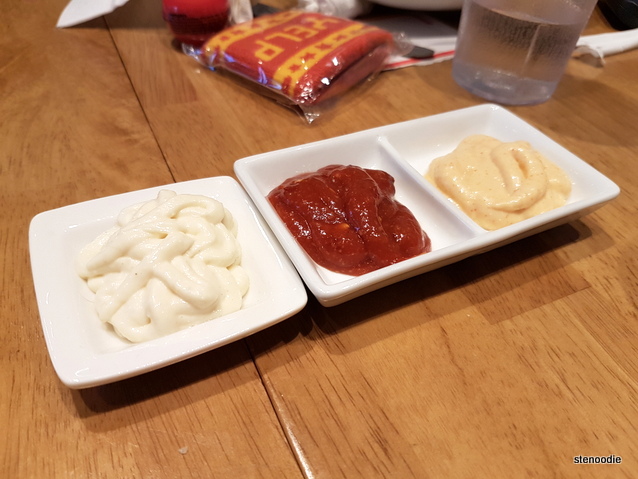 The second course which was already on the table was the Nihari Poutine.  It was a dish of “famous masala fries topped off with veal chunks and cheese kurds and then the deliciously thick nihari sauce.”  Nihari is the national dish of Pakistan where the nihari is beef shank cooked overnight into a thick and spicy stew. 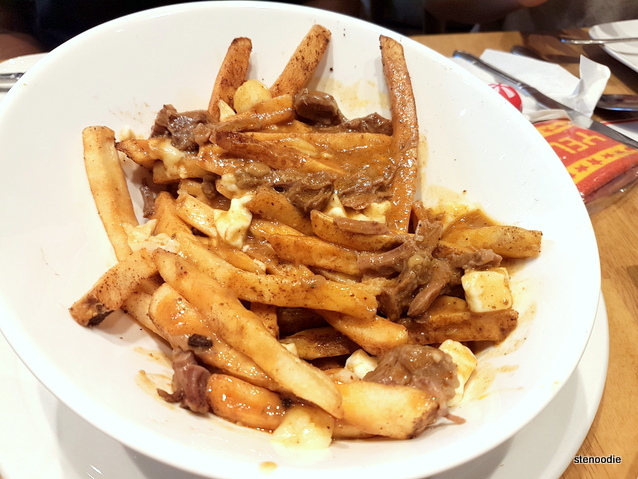 Nihari Poutine. $7.99
-“famous masala fries topped off with veal chunks and cheese kurds and then the deliciously thick nihari sauce”

It looked great and tasted good too.  The fries were coated with the thick nihari sauce which was slightly spicy too.  I liked the veal chunks as they weren’t too rough or chewy.  The cheese curds were good too.

At this time, I also received the Mango Lassi which was a drink available at many Indian restaurants.  It was a drink made with their “own blend of mangoes and goodness.”  I liked this Mango Lassi as it smelled of fresh mangoes and wasn’t too sweet.  This was one of the best items of the night. 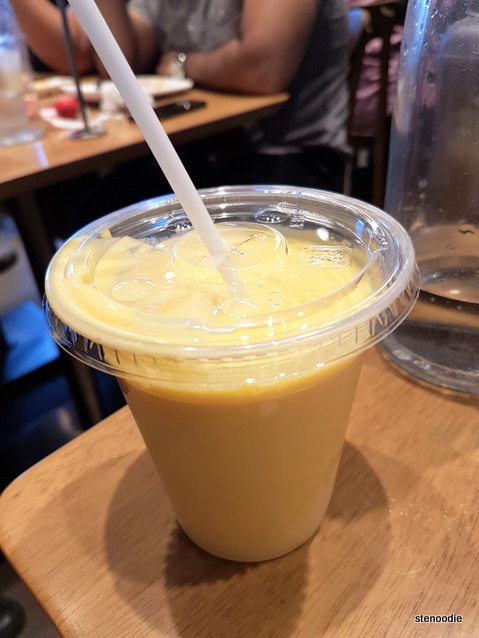 Mango Lassi. $3.99
-made with their “own blend of mangoes and goodness”

The third course was a Butter Chicken with Naan.  I kept my expectations low for this dish because when it was served, the colour and tone of it didn’t impress me.  I like butter chicken to be very smooth, rich, with tender morsels of chicken chunks.  I found that the butter chicken sauce wasn’t creamy or smooth enough for my taste and that the chicken was moderately textured.  It also wasn’t spicy at all or had that bright colourful look or taste that I’ve had in previous establishments. 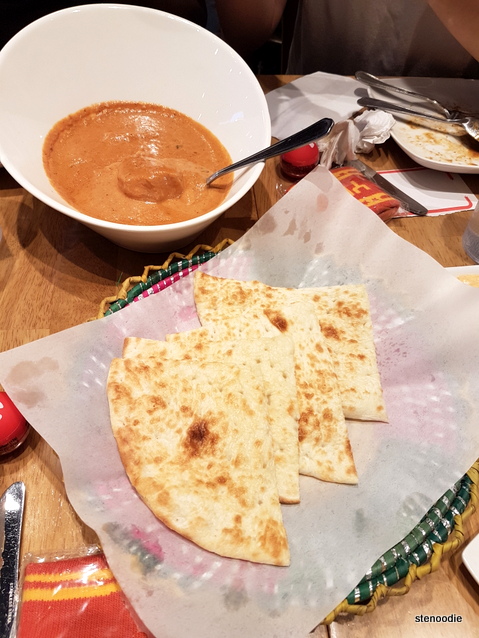 The fourth course was a huge platter for us to share.  I liked how after each course, the server made sure to come around and clear our table of the previous dish before the new one was set down.  The service here was very exceptional and I appreciated it a lot! 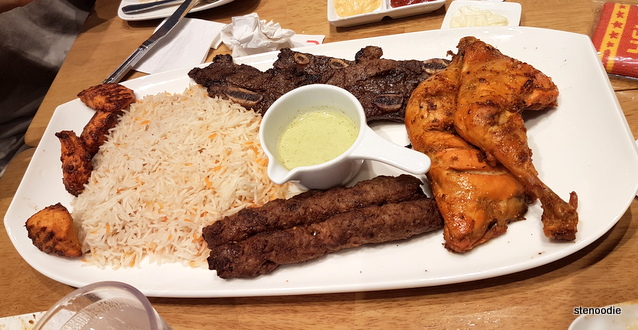 This platter was the Uncle’s Platter which included for us two tandoori chicken, two karachi kababs, two skewers of chicken boti, two ribs, and rice.  Their menu online says they usually include fries too but I guess because we had had the poutine already, the kitchen left the fries out.  We received a cucumber yogurt sauce though for the meat which I thought was very delicious and the acidity helped to break up all the heavy carbs and meats of the night.

I have very particular tastes for meat and when meat is a little rough or dry, I don’t like it.  While the Tandoori chicken was tender, I thought it wasn’t juicy enough for my taste.  It was still the better choice of all the meats that we tried though. 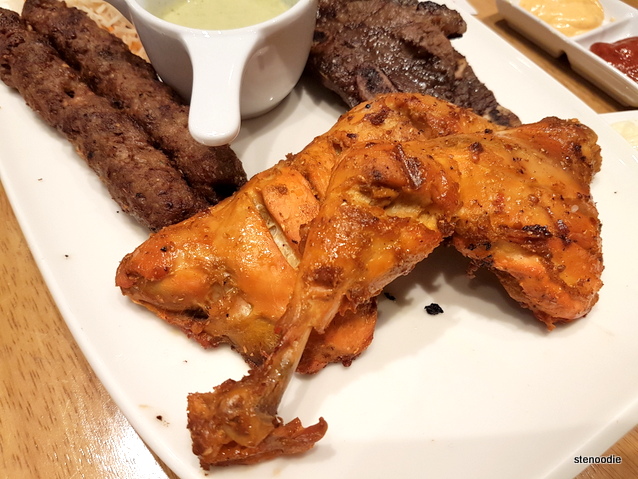 The Pindi ribs were a little rough as well; the fatty portion of it was the better portion. 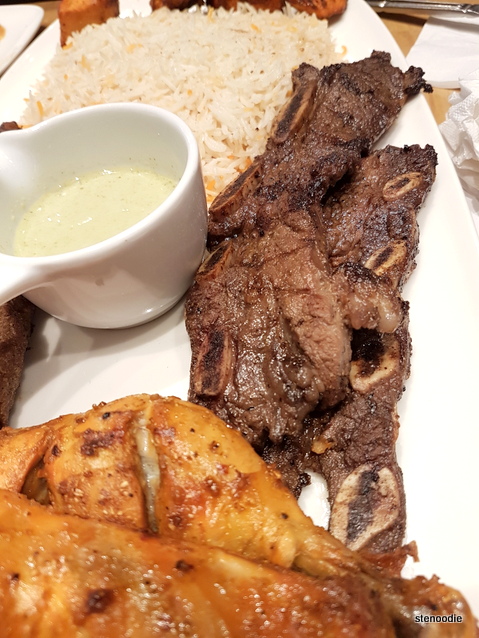 The chicken boti had a good spicy flavour but again I thought it was extremely dry.

The karachi kababs were apparently very spicy according to my tablemates but I didn’t find it all that much spicy at all.  I also found this was rough and a little dry. 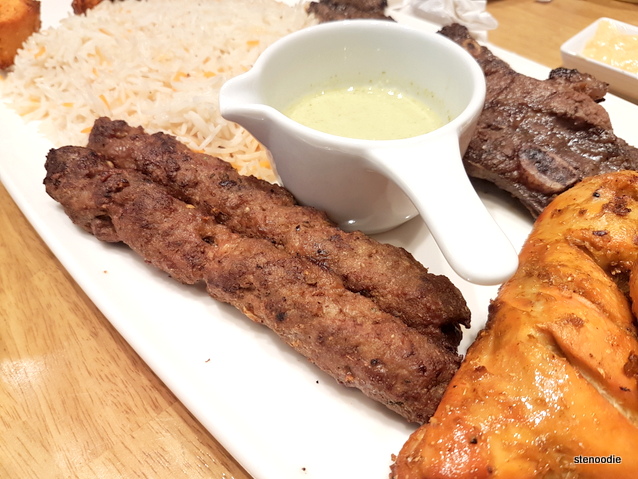 After our main course, Kris did a small thank you speech for us and thanked the staff as well for their generosity in inviting us to try their food.  I definitely commended their service and generosity and closing their restaurant for two hours in order to give us a private dining experience. 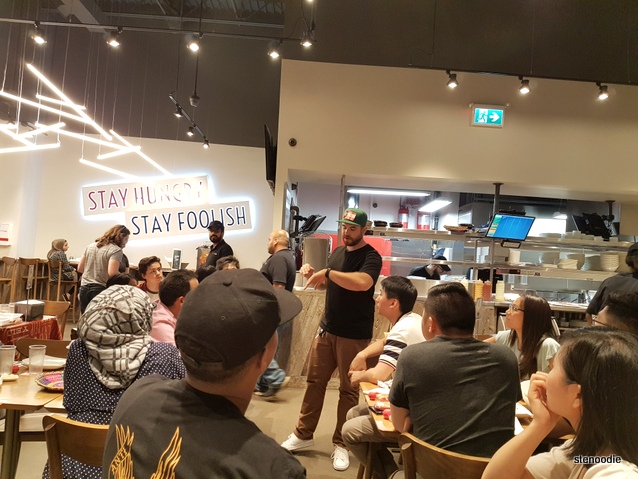 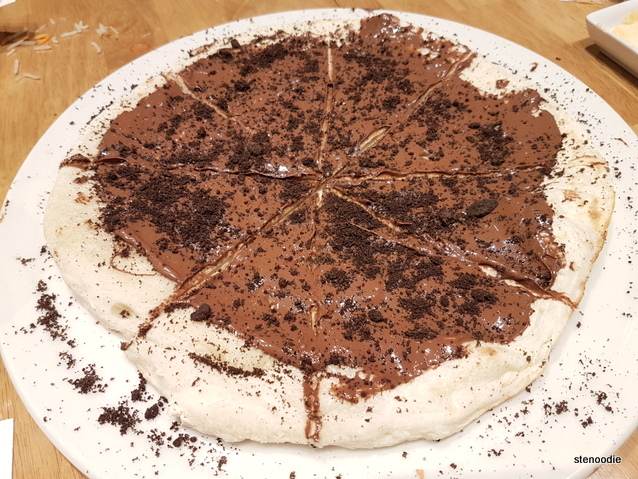 We completed the night with dessert!  I had never had Nutella Oreo Naan before and I was highly impressed with this dessert!  This was a naan pie dressed up with thick nutella and dusted with Oreo crumbs.  One slice was all it took for me to try this out as I was too full for a second serving.  The Nutella was brushed on very thickly on to the naan pie to the point that after I took a bite of it, a lot of it stuck to the roof of my front teeth. XD  It was very sweet though and a good dessert for Nutella and chocolate lovers. 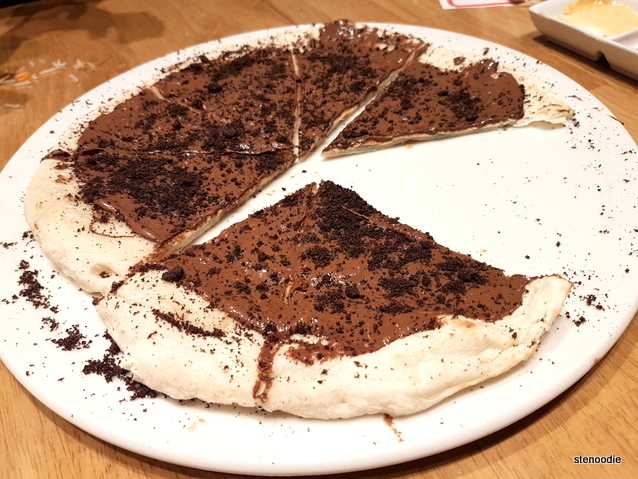 The naan was very soft and thin

I like how Yelp events stick to the schedule for the most part and the event was right on the dot at 9 p.m. 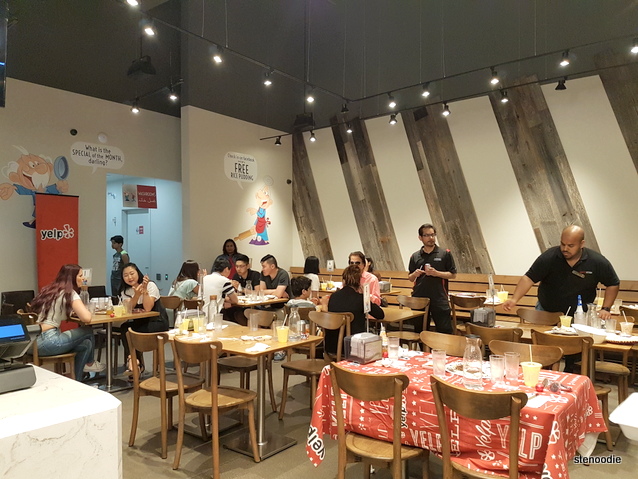 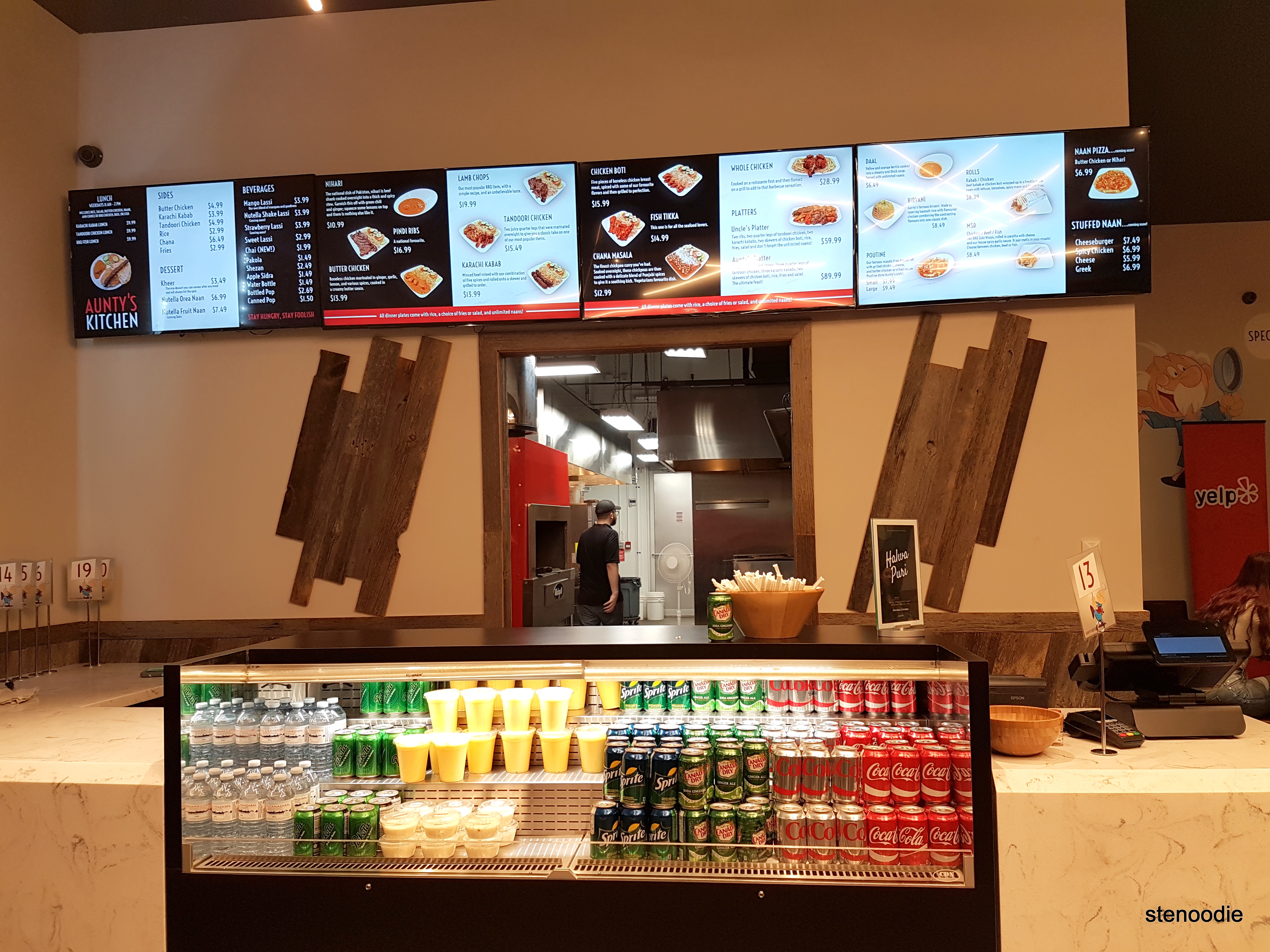 The counter for ordering food

Thank you again, Yelp GTA, for organizing this event for us and to Aunty’s Kitchen for hosting and providing all of the food.

(This location of Aunty’s Kitchen is their second one.  They have an original location in Waterloo!  Also, they offer free wifi on site, is handicapped accessible, and there was lots of free parking.)

FTC Disclaimer:  Although Yelp and Aunty’s Kitchen invited me to a complimentary tasting, the opinions expressed here represent my own and not those of the companies.