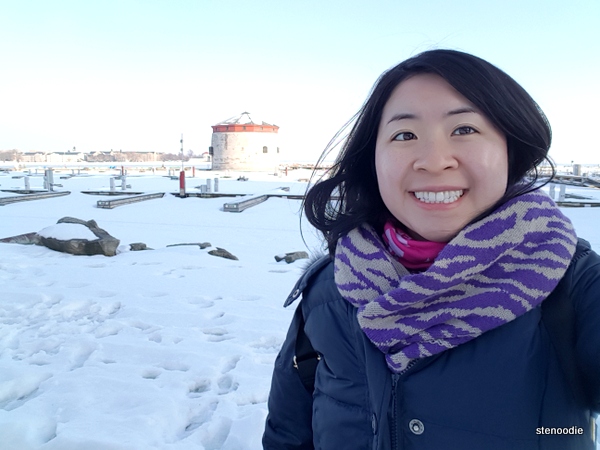 Ending the third day of the trip in Kingston, Ontario 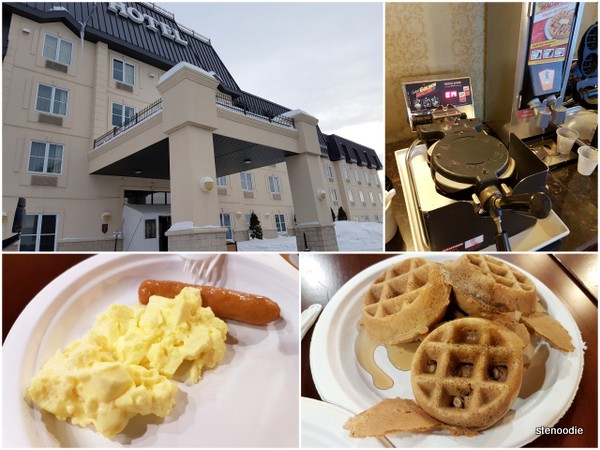 This third day of travels was comprised mostly of driving back to Toronto from Quebec, which was an 8-hour drive in itself.  The biggest attraction of the day was definitely the dog sled ride.  Riding in a dog sled was something that had been on my bucket list for a long time.  I’ve always wanted to experience it and I was so glad that this was on the itinerary as part of the three-day trip from Safeway Tours!  This dog sledding was done at Erablière du Cap Inc., a family-run business operating maple syrup and seasonal dog sled rides, in Saint-Nicolas, Quebec.  I didn’t even know that there was dog sledding available in Quebec!

We arrived at the site of Erablière du Cap Inc. (1925 Chemin Lambert, Saint-Nicolas, QC) very early in the morning.  By that, I mean we were there by 8:15 a.m. and ready to ride.  Not everyone in the tour participated in this activity since it was an extra expense ($25 per person for a 15 to 20 minute ride, which I thought was quite reasonable). 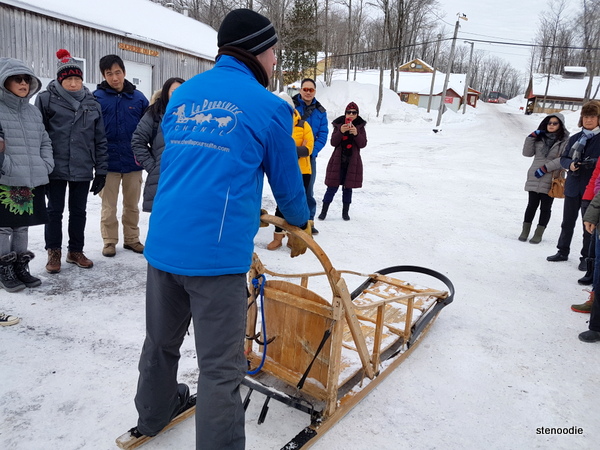 The staff at Erablière du Cap Inc. demonstrating how to operate the dog sled

While on the tour bus, our tour guide Daphne already explained to us a little bit about how it would work.  These were traditional two-person dog sleds where one participant would be sitting in the sled while the other participant actually drives the sled.

Once we got off the bus, the staff member from Erablière du Cap Inc. did a quick demonstration of how it worked.  The person sitting inside the sled obviously didn’t have much to do except sit still, but the person driving the sled had to be mindful of how to steer the sled and how to slow it down or stop it.  Slowing down the sled was done by stomping the foot on the railing which dug into the snow ground and essentially “dragged” along the ground which would tell the dogs to stop.  If someone wasn’t heavy enough to stop the sled this way, they might even have to jump on the railing with both feet in order to get the dogs to stop.

There were some dogs (huskies?) running freely around us as the demonstration went on.

After the demo, the ones who had signed up to ride the dog sled followed the staff member to the area where the start of the track was.  Along the short walk, we saw the dog houses where all the dogs stayed in.  There were essentially large plastic bins placed on its side to provide shelter for the dogs.  There were so many dogs all standing around their shelters and barking.  We were rushed along the path to the start of the track and it seemed a bit unnerving and unlike what I had imagined the start of dog sledding to be. 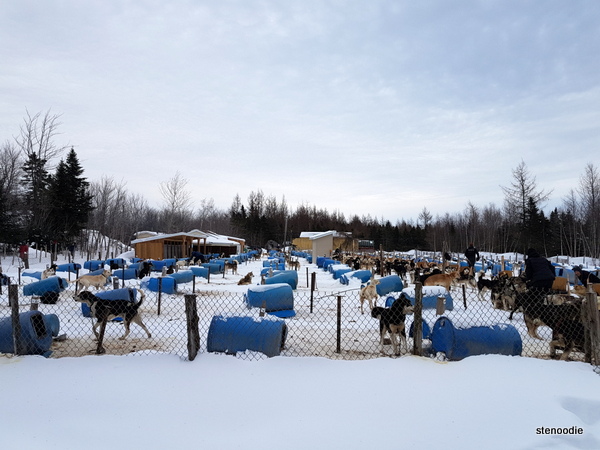 There were so many sled dogs there! 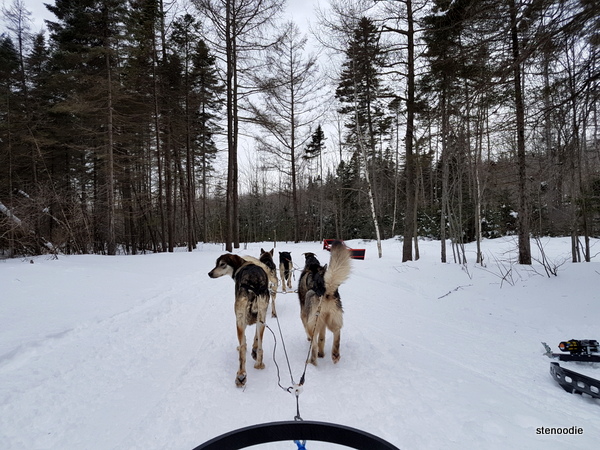 Our doggies leading the way 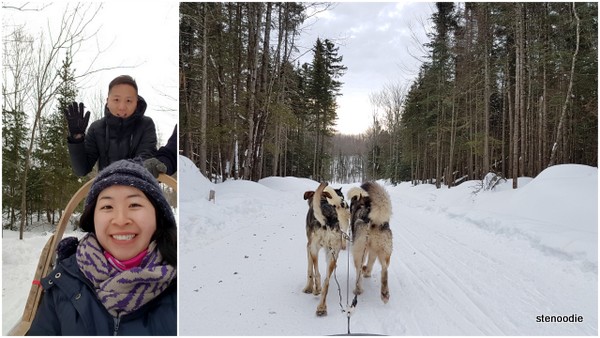 Instead of what the tour guide and staff member had told us previously about one person standing on the sled as the driver, our sled ride was accompanied by one of the female staff members who stayed on our sled throughout the entire ride.  I didn’t really like this (even though I wasn’t the one driving) because it didn’t seem like an authentic experience without my cousin being the one in full control of the sled.  We soon found out why she came along for the ride.  There were five dogs leading our sled at first and at least one of them was very reluctant to run.  Since I was sitting in the sled, I saw how the dog kept looking back at us and didn’t want to run forward at all.  We actually stopped for a bit and a sixth dog was added to the pack.  After a bit of running again with the new dog, it turned out that one of them had to release some poop!  It was cruel that when the sled stopped for the dog to do this that the female staff standing on our sled hollered at the dog to keep going.  You can’t stop nature’s business and I actually didn’t mind if the dog went to do its business first before having to continue running the track.

So that’s probably why we had the female staff member on our sled.  They probably knew that the dogs wouldn’t be easy to handle.  If my cousin and I were the only ones in the sled at this point and the dogs stopped running, we might not have been able to get them to run again because the dogs wouldn’t have listened to us. 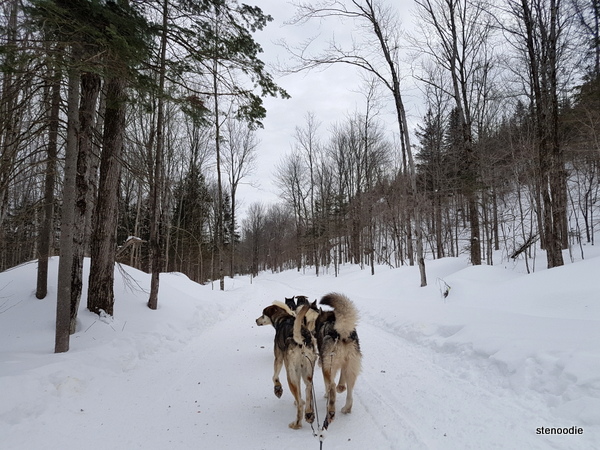 The forests all around us were a nice touch

Anyway, after this little blip, the rest of the dog sledding was a lot more faster since the dogs ran together and with so much speed.  In the last five minutes or so of the ride, the dogs were running so fast that if they weren’t careful, our sled might actually have flipped!  Also, it was so fast that the dogs were kicking up little pellets of snow that were being flicked onto my face.  It hurt and I’m glad that I had on a face scarf to shield the incoming snow pellets.

It was an interesting experience and I do wish that we weren’t the first ones to have gone in the sled.  Some of the other tourmates afterwards got a sled with dogs that were much more well behaved and were able to run freely without any staff member onboard the sled.

The process was also really fast that it was clear to me that it was a straight-up business mentality.  The staff didn’t care about the quality of the dog sledding ride; they merely wanted you to get in and out so that the next person(s) could go in.  I can’t really tell if that’s the way that Erablière du Cap normally runs their business since we came here as part of the Safeway Tours.  Maybe if you were to come here privately, their dog sledding experience is less restrictive on time and more enjoyable? 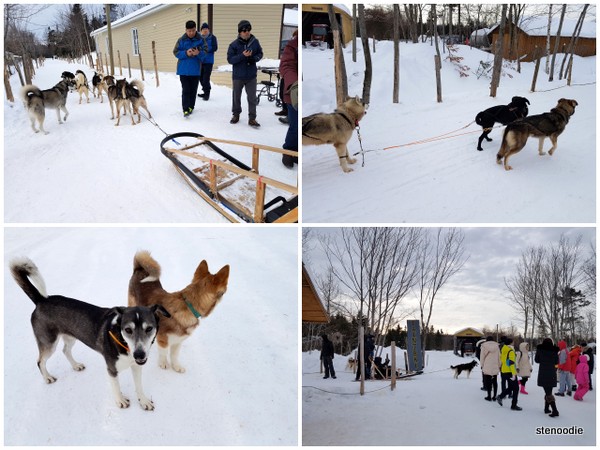 Watching the other tourmates have a go at it

I’m glad that I had my very first dog sledding experience, but I’m definitely looking forward to the one in Yellowknife to see how that compares.

After the dog sledding ride, we took a look at the husky puppies that were in the nursery.  These pups, once grown, will also be like their parents and become sled dogs for the business.  I’m not sure how I feel about that having witnessed how the dogs get treated to make a buck.. 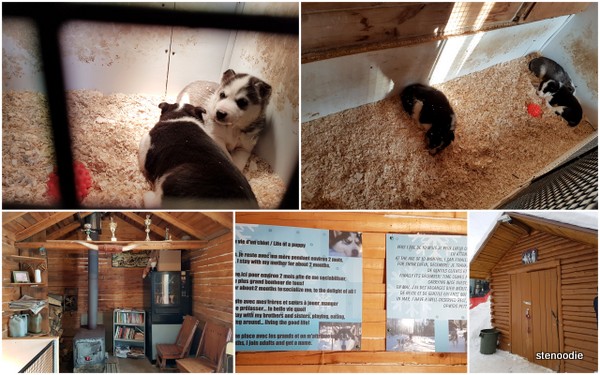 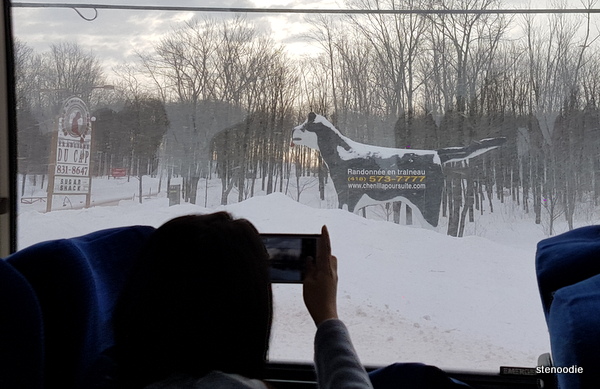 After this early morning adventure, we continued on the road towards Ontario.  After an hour on the bus, we had a pit stop in Saint-Nazaire-d’Acton, Quebec. 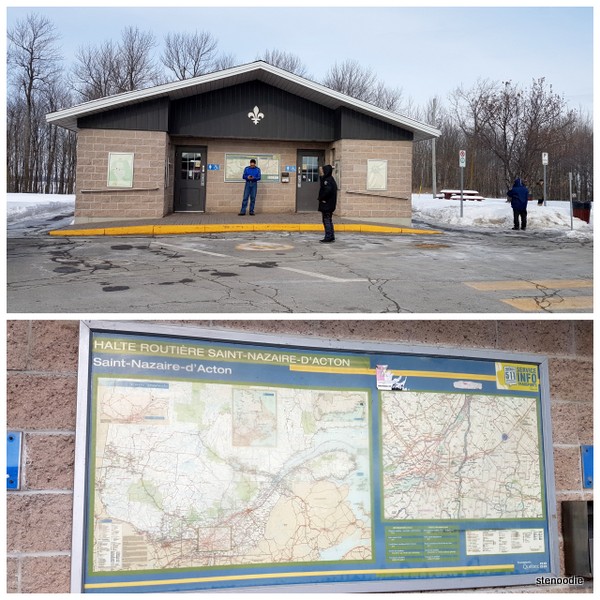 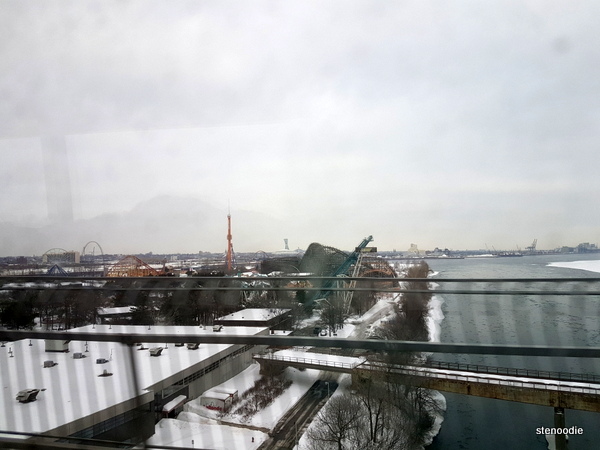 Returning back to Montreal for lunch. You can see the amusement park! 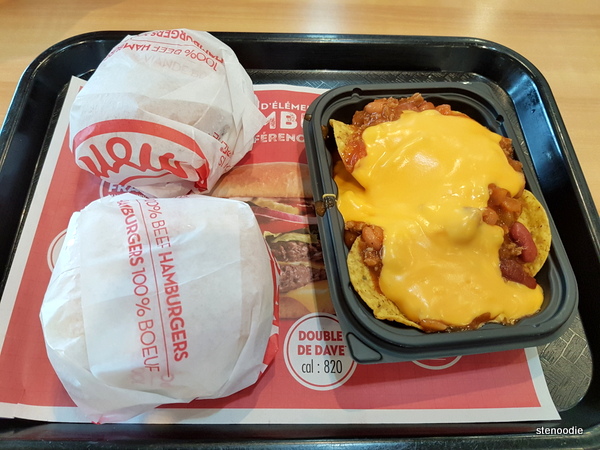 Wendy’s for lunch. This was less than $7!

After another hour of driving, it was lunch time!  The tourmates had lunch at another Mandarin buffet restaurant (as part of the pre-paid three-day meal package) while we scouted out a Wendy’s in the same plaza and dined there.  This was my second time having Wendy’s food in three days’ time since several years ago and I discovered that their cheesy nachos chili is actually really delicious!  Why is Wendy’s (and other fast food chains) food so cheap?  What’s wrong with it that it can be manufactured at such a low cost?  Hmm… 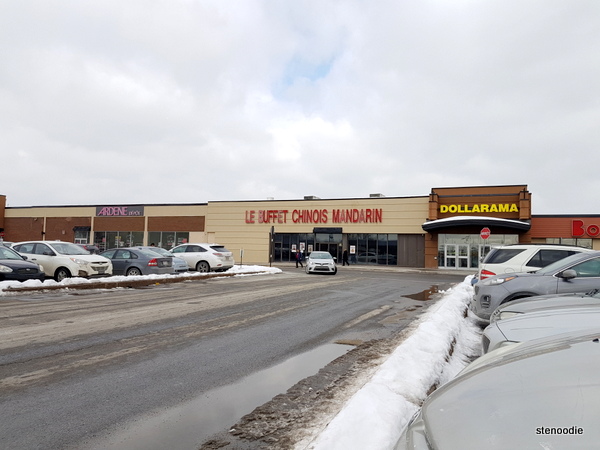 We had another pit stop at an OnRoute (Mallorytown) rest station at 3 p.m. 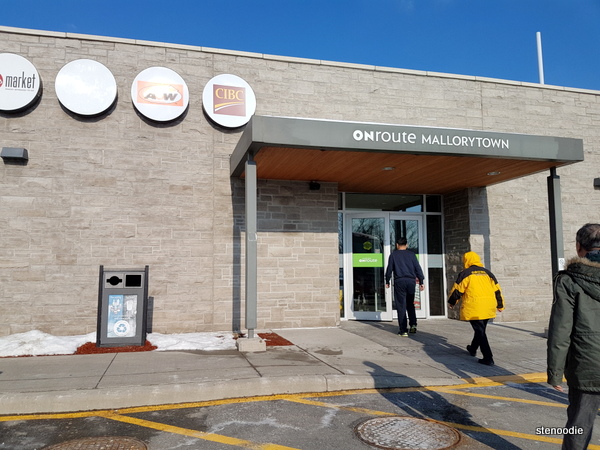 Then by 4 p.m., we had arrived in Kingston!  We passed by their penitentiary (what they’re famous for) and stopped to take photos in front of the Kingston City Hall and surrounding lakeside area.  I remember being here before when we stopped here on the East Coast trip in the summer.  I remembered the large train.  This time, there was also a new Kingston sign fit for tourists to take a photo in. 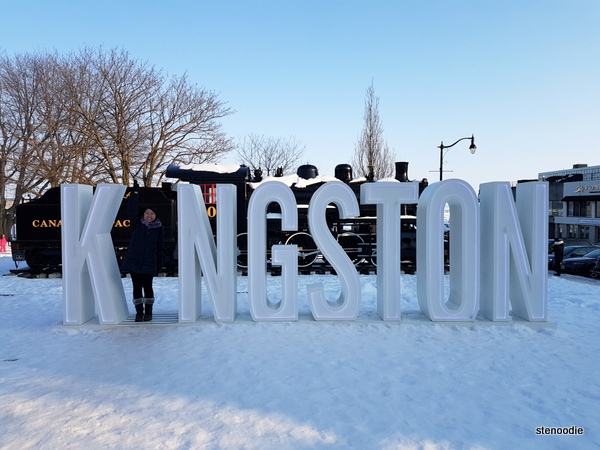 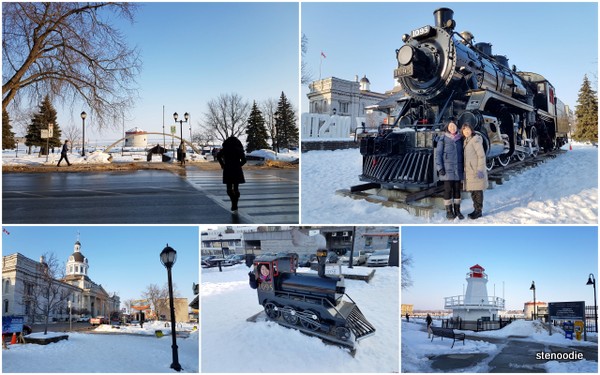 Trains in a winter scene 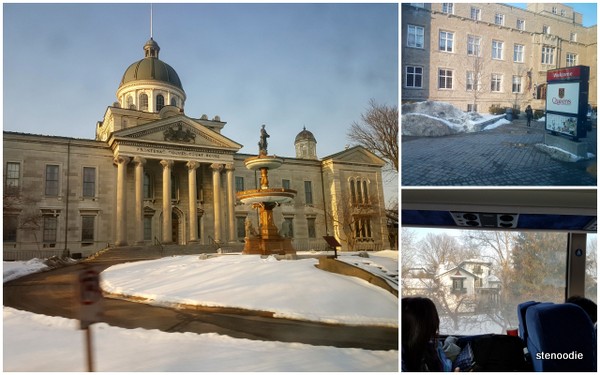 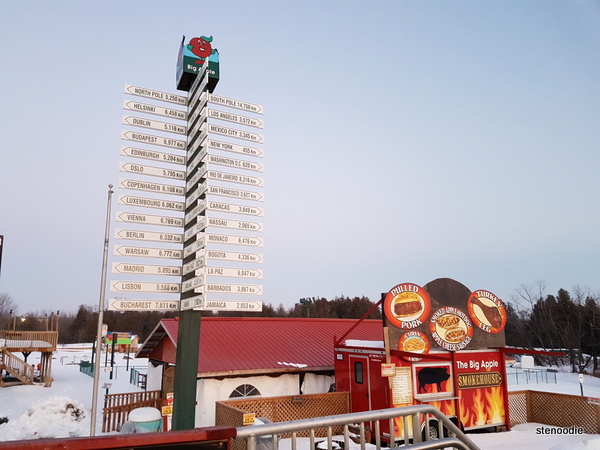 Arrival at The Big Apple!

After this, it was back on to the bus.  By 6 p.m. as the sun was beginning to dip, we arrived in Colborne at The Big Apple (262 Orchard Rd, Cramahe, ON)!  It was dark by this point so I wasn’t able to get a photo of the actual Big Apple.  It had been a few years since I had seen it actually.

Walking into The Big Apple store, I was actually impressed with all of the apple products that they had.  I didn’t remember The Big Apple store being so bright and stocked full of so many varieties of apple products!  I was so impressed.  There were apple teas, apple vinegars, apple pastries, honeys, apple bread, and of course, lots of apple pies.  We left with an apple pie to try and also bought the Apple Cheese Stick to eat on the bus as a pre-dinner snack.  It was quite good and exactly what I wanted. 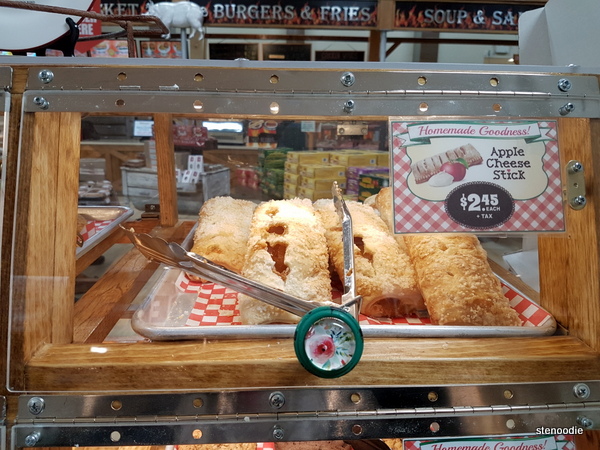 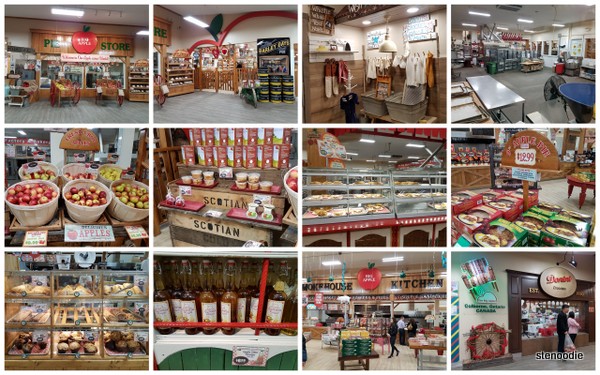