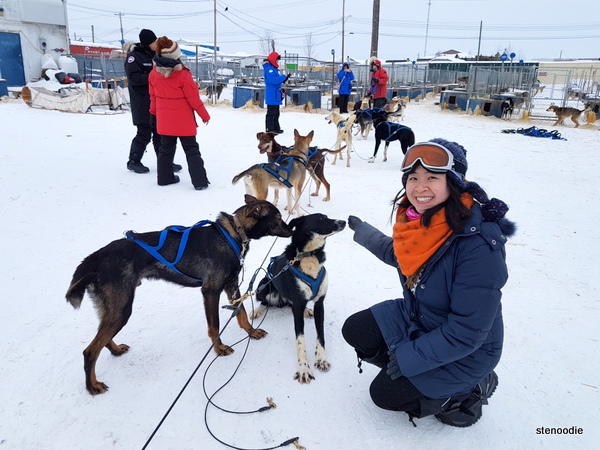 February 24, 2018:  On the third day of our trip in Yellowknife, the first item on the itinerary was dog sledding!  This was an optional activity of the tour and cost $75 per person.  I was very excited to do it despite already having experienced dog sledding for the first time in Quebec only a weekend ago. 😀  I was excited to experience real dog sledding in the north of Canada!

The tour guide picked us up at 1:30 p.m. so we had plenty of time in the morning to eat breakfast and rest in the hotel. 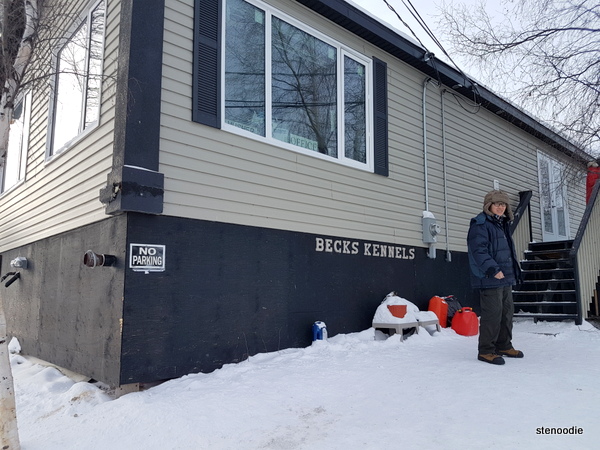 The dog sledding was done at Beck’s Kennels (Beck’s Sled Dog Kennels & Tours) at 124 Curry Drive.  When we arrived, we saw lots of dogs in cages near the side of the facility and then many more dogs in a larger enclosure once we entered the facility.  The dogs were kept outside with individual wooden structures as dog houses.  This one was different from the one in Quebec since there was absolutely no scent. 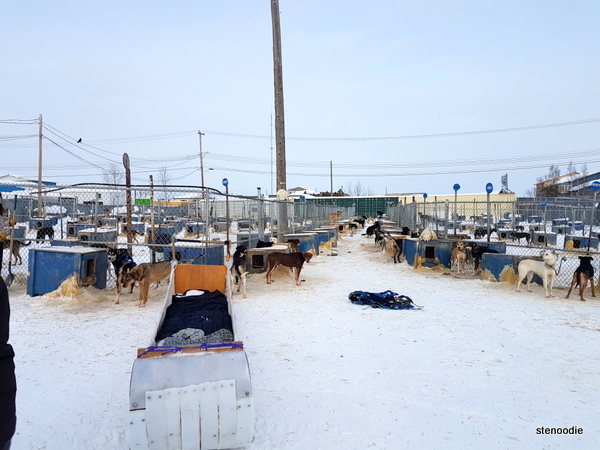 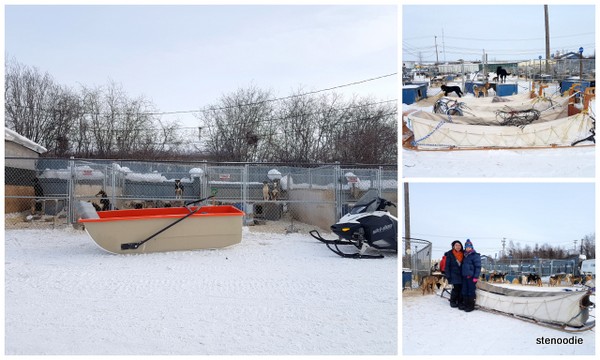 We were one of the first to take off.  The dog sled here was also very different from the one in Quebec.  It sat up to six people!!  There was a certain procedure to getting all six of us snugly in the sled.  Each person had to sit with their legs spread across the width of the sled and then we each had to slide up against the other person to stay snug and safe.  It was close quarters in that sled! 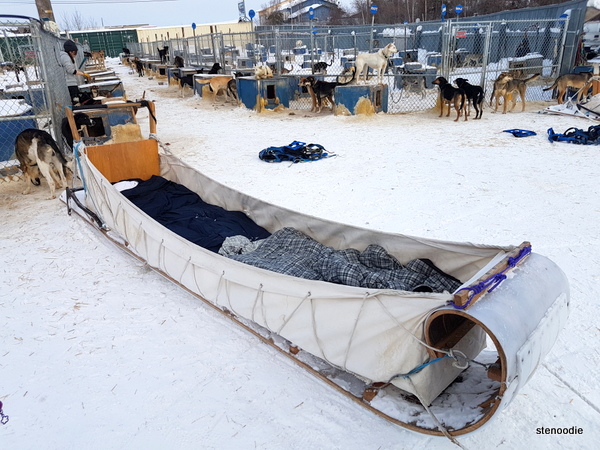 We had six people in one of these dog sleds 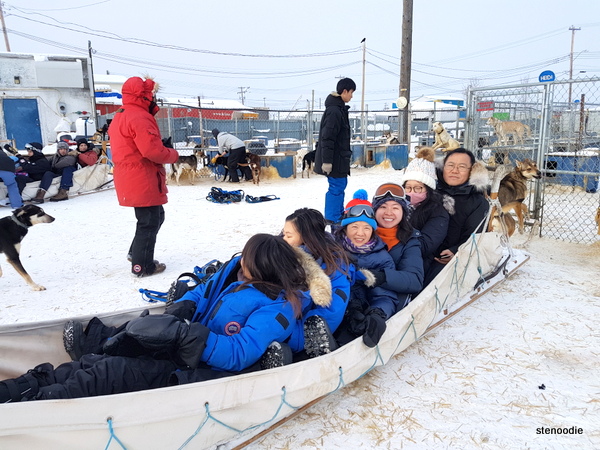 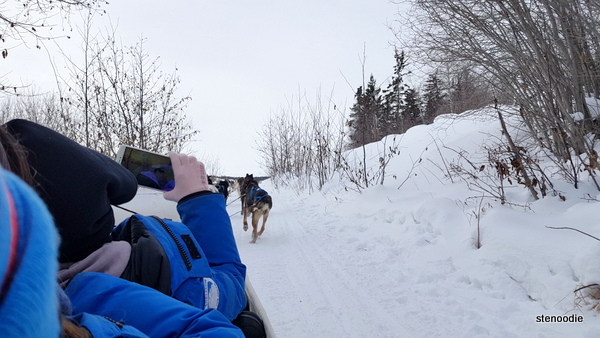 Wheee! Away we go

I believe there were 10 dogs chained up to our sled.  We were all passengers in the activity and one of the staff members was the one driving the dog sled.  Again, it was different from the one in Quebec.

We set up and rode off.  The first couple of turns were exhilarating and a bit bumpy but oh so much fun!  It felt like I was on a roller coaster ride. 😀 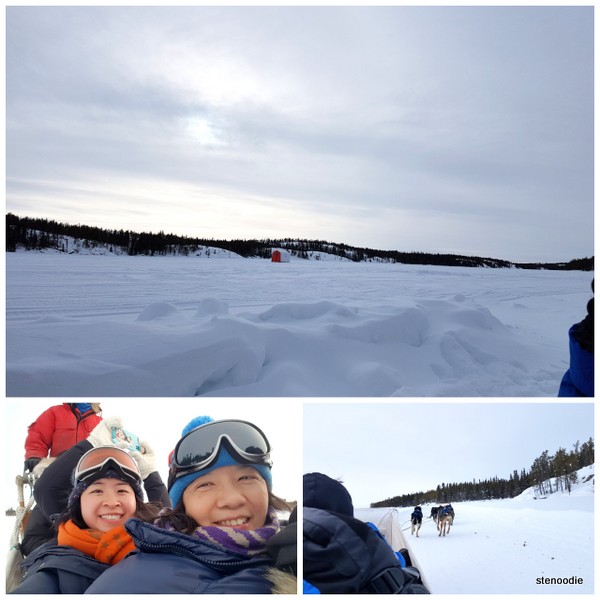 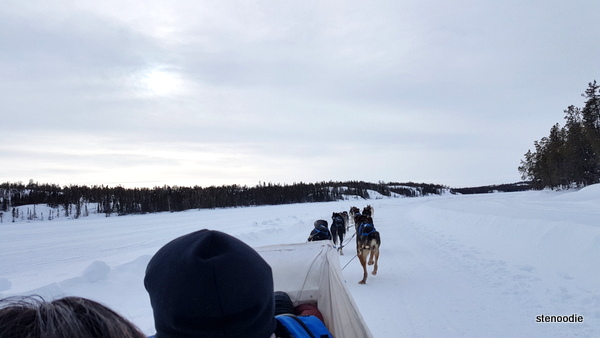 The landscape of Yellowknife in the background was the best thing I could ask for on a dog sledding ride.  It was gorgeous!  It wasn’t too cold either and such a suitable day to play outdoors. 🙂  I could see the big round sun in the distance (or at least when I looked at the photos afterwards).

I liked how the dogs here from Beck’s Kennels were well behaved and willing to run.  The musher only had to call to certain dogs a few times to make them stay on course.  The dogs ran consistently and moved quickly. 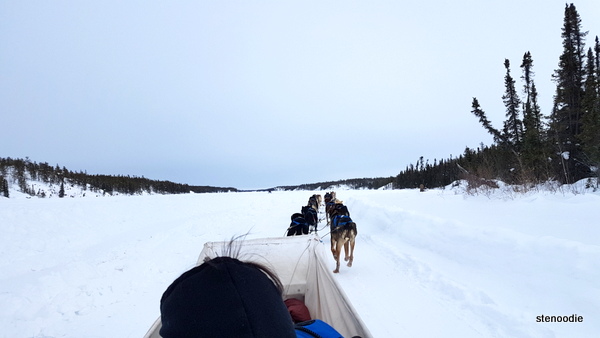 On our way in the tundra (XD), we also saw people on snow mobiles and two-person dog sleds as per the one in Quebec.

The ride was about 20 minutes and so fun.  Because of the way we were sitting and leaning back, I also felt like I was doing some abs exercise to stay 45 degrees upright. XD 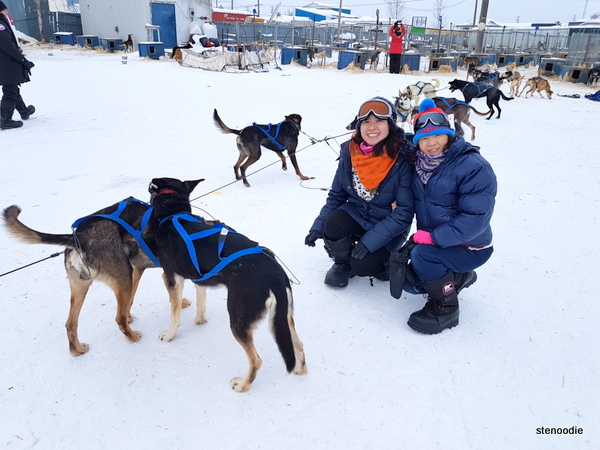 Photo with the doggies that led us 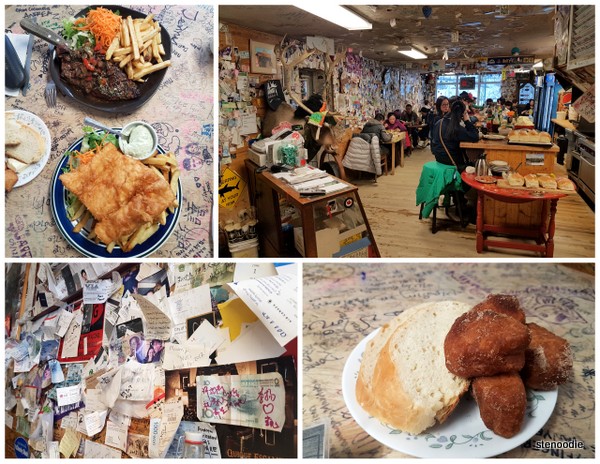 After this, I asked the tour guide if he could drop us off at Bullocks’ Bistro, a place well known for local fish and chips and a tourist must-visit.  I’m glad he was able to drop us off there! 😀

Click here to read about my experience at Bullocks’ Bistro.

After our satisfying meal, we returned back to the hotel by cab.  The cab driver was very friendly.  We originally had planned to walk back to the hotel from Bullocks’, but upon stepping out of the restaurant, the wind had picked up and the sun was setting.  We weren’t willing to take the 30-minute trek in those conditions so the 8-minute cab ride was the better choice.  It was about a $10 ride.  We rested up in the hotel before we ventured out for the third and final time of aurora chasing. 🙂 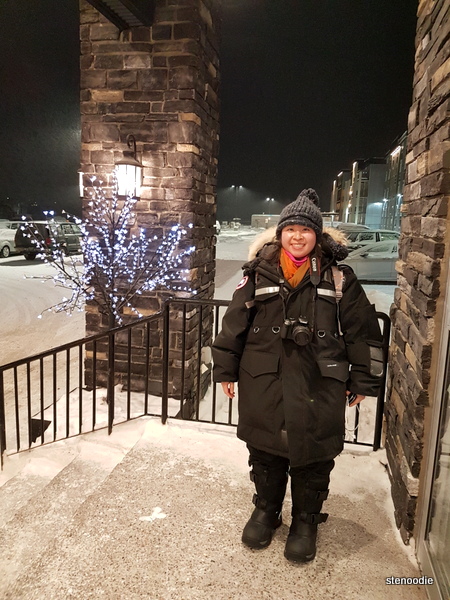 All ready for the third night of aurora chasing in my oversized coat! 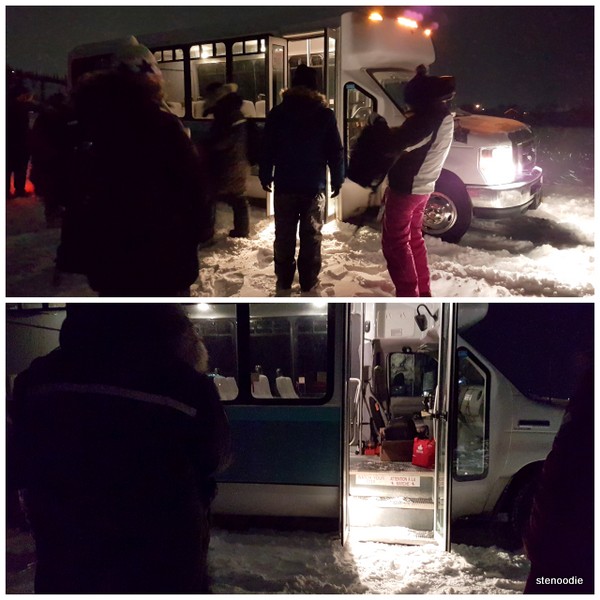 Look at how deep that snow is!

On this night, we unfortunately weren’t able to get to the spot the tour guide intended for us because our tour bus suddenly got stuck in the deep falling snow(!).  It was apparently a short cut that he was taking which led to this situation.  It had been snowing during the afternoon and although the tour guide had driven through that path earlier in the day, by night fall, the soft snow had compacted to a point that when you stepped in, your boots sank into the deep snow too.  (I remember in elementary school during recess time when we got this kind of snow, it was so fun to walk in.)

It took about an hour for the dilemma to be resolved.  First, the tour guide exited the bus and tried to remove the snow from the tires but once it was futile, we all got out from the bus and various tourmates tried to help too.  There were then two other drivers that were called in to help, one of whom was the manager for our tour.

To compensate for our loss of aurora viewing that night, we were given free access to the manager’s villa mansion by the lake!  This was a mansion usually reserved for his VIP guests to take aurora photos with a lake-side view but since they wanted to make up to us for the disappointing evening, this was the proposed bonus feature. 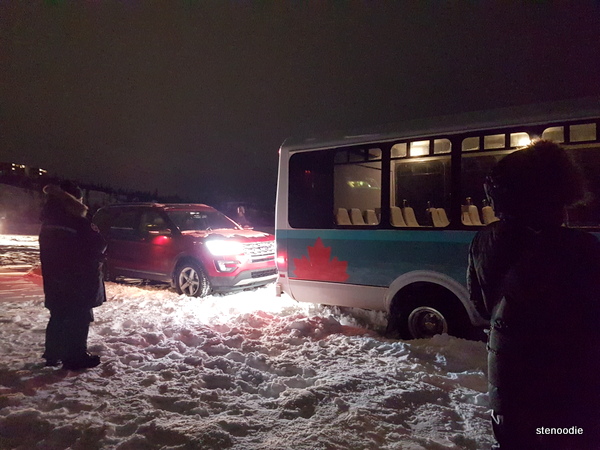 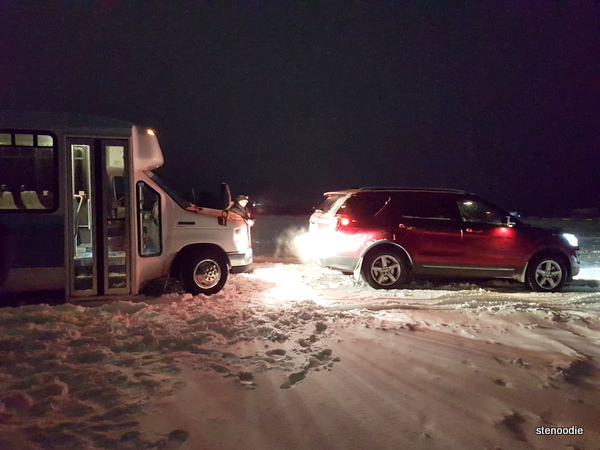 Then we tried to attach a cable to pull the stuck bus forward. It didn’t work either

I already knew that there was no chance of us viewing any auroras that night despite the attempt to reconcile us; there was simply too much snow falling from the sky and thus too many clouds in the way for any clear aurora viewing.  I wasn’t disappointed at all and actually quite thrilled that the third night was so eventful.  XD

We took turns riding in a private car to the villa and within a few rounds of the car going back and forth between the villa and the place where the tour bus was struck, they were able to get the tour bus towed out of the dead spot and back on track.  Yay! 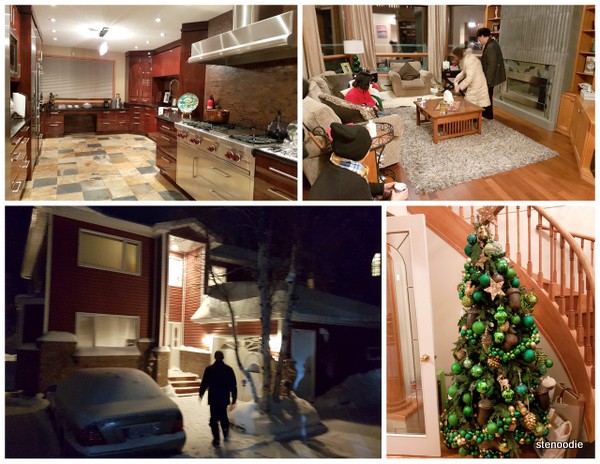 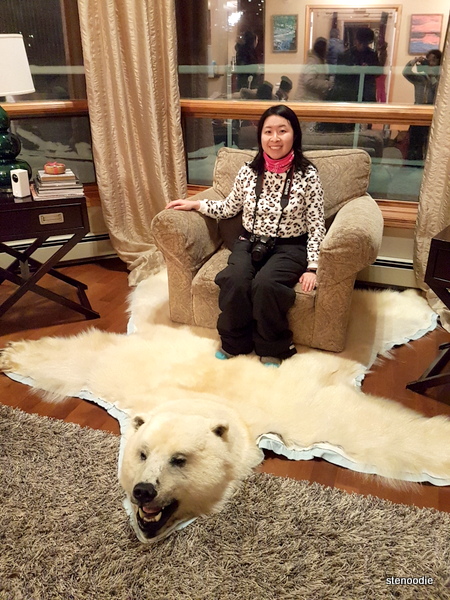 The mansion was very nice and very big.  The tour guide helped us to take fun photos on the frozen snowy lake. 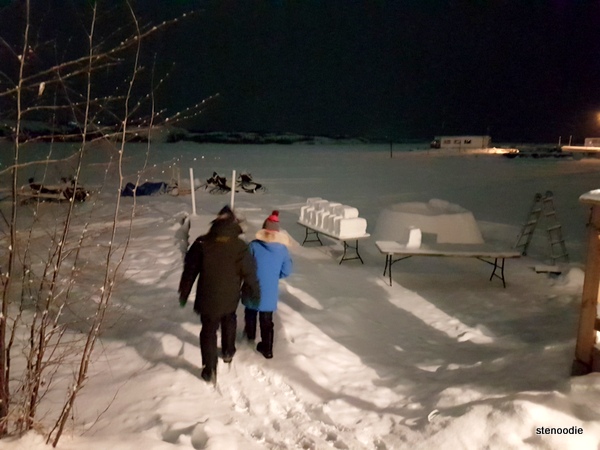 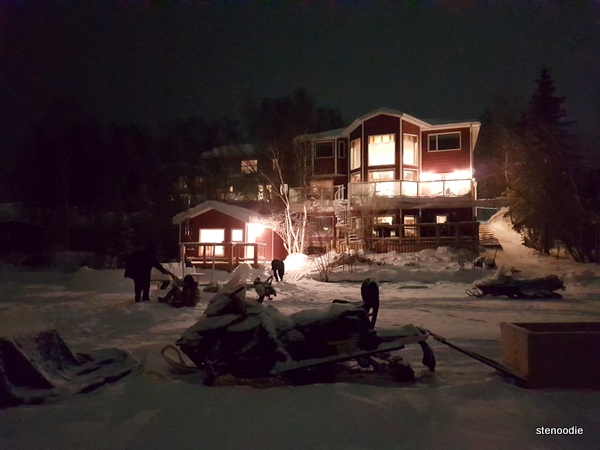 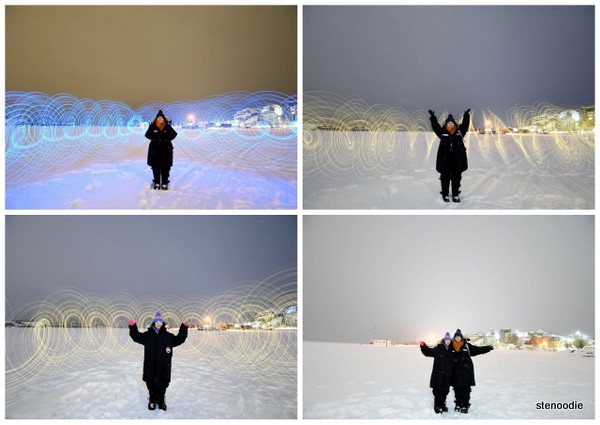 Fun effects in the snow 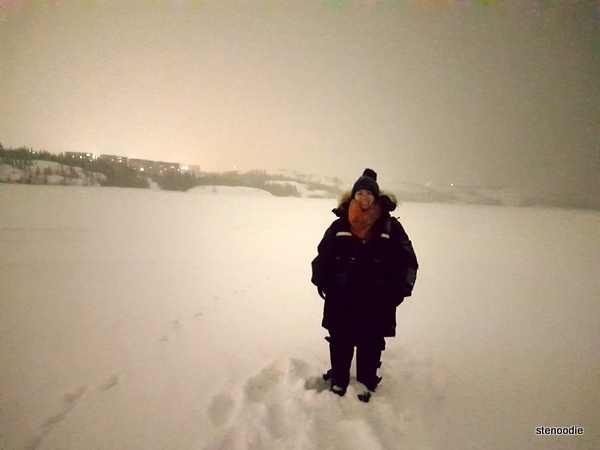 Photo in the snowy frozen lake

After that, we left the mansion at midnight and knowing that there wouldn’t be any auroras that night, I was looking forward to returning back to the hotel for an early night.  I passed out on the the bus ride and we actually didn’t arrive back at the hotel until 2 a.m. or so in the morning!  What actually happened was that to appease the guests (especially the ones who had just arrived for their first night — our tour was made up of various guests that didn’t arrive on the same day), the tour guide had an obligation to “try” chasing the aurora lights until 2 a.m. regardless of weather conditions.  In this way, the guests can’t complain that the tour didn’t try to chase aurora lights.

Tomorrow is our flight back home!

5 Responses to Day 3 in Yellowknife 2018: Dog sledding, Bullock’s Bistro, Stuck in the snow