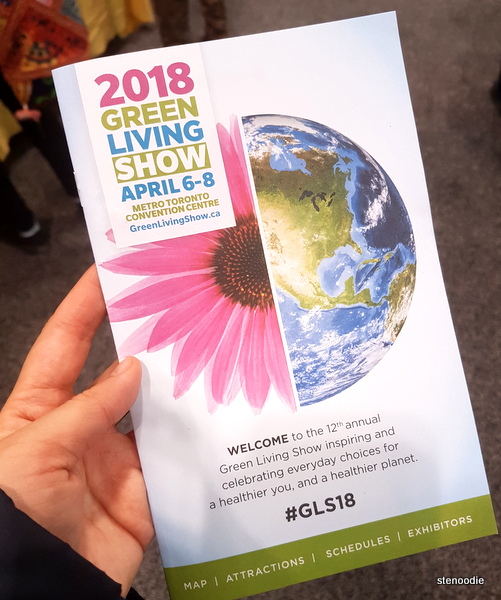 April 6, 2018:  I inadvertently got to go to the Green Living Show this year (held from April 6 to 8) because I randomly won a pair of free tickets on Instagram!  Thank you, @mangiacakeorganics!

The Green Living Show was so much more fun and exciting than I expected — it was my first time attending.  The main premise of the show was to promote green living household items, eco-friendly food and drinks, green living, eco-friendly cars, and even the upcoming legalisation of cannabis in Canada.

Screenshot of the contest that I won

When Priscilla and I arrived about 5:40 p.m., we strolled through the booths until the more exciting booths of the samples of food came up.  We sampled so many items like vegan chicken nuggets, veggie steaks, cricket bars (apple pie, chili chocolate, and lemon), kale chips, wild blueberry juice, coconut jerky, cheese, Nupasta, seasalt chocolate, more cricket bars, chocolate almonds, and so much more.  I had so much fun food sampling!!  I ended up buying a block of Emmental Swiss cheese for $5, all natural blueberry juice three bottles for $25 shared with Priscilla, and kale chips $13 for three bags shared with Priscilla. 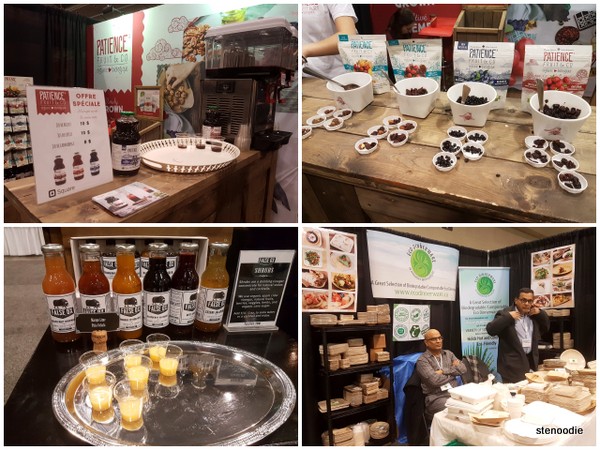 Cricket made into protein bars from Fit Cricket and made into desserts including some raw pressed juice which I liked:

I really liked the sakekasu miso paste from Abokichi that were served on little wheat crackers. 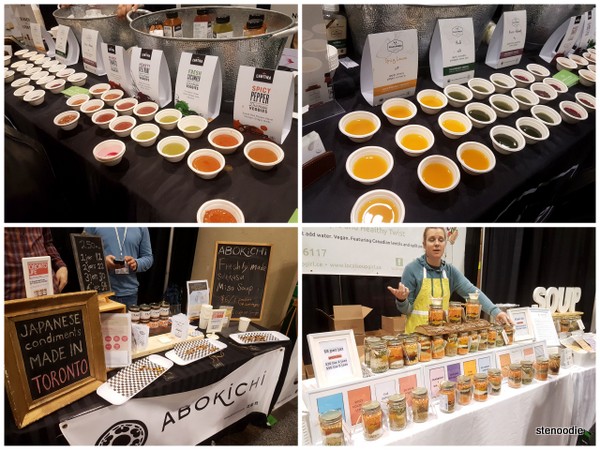 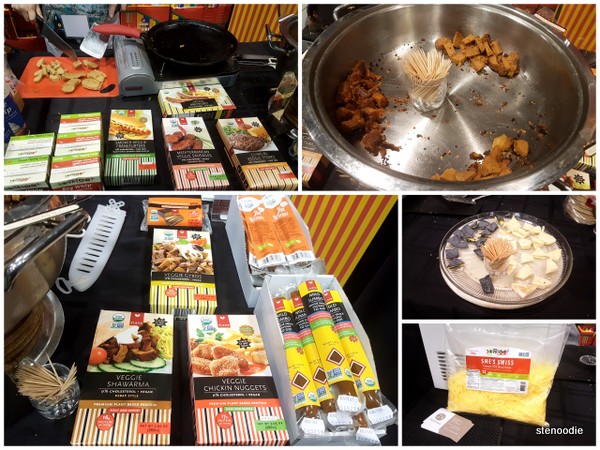 Beeswax wrapping is really popular nowadays.  We saw two vendors selling those beeswax vendors (the first one I had seen at the One of a Kind Show recently).  We also passed by the Carrot vendor and I gleefully expressed my approval and appreciation for this app that sets you earn points for walking.  We also tried some coconut chips and fair trade banana smoothie. 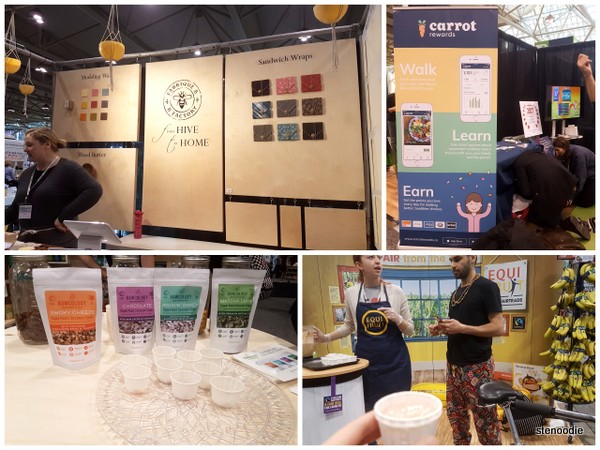 I’ve tried nuPasta before!  They prepared the samples deliciously with a pesto sauce! 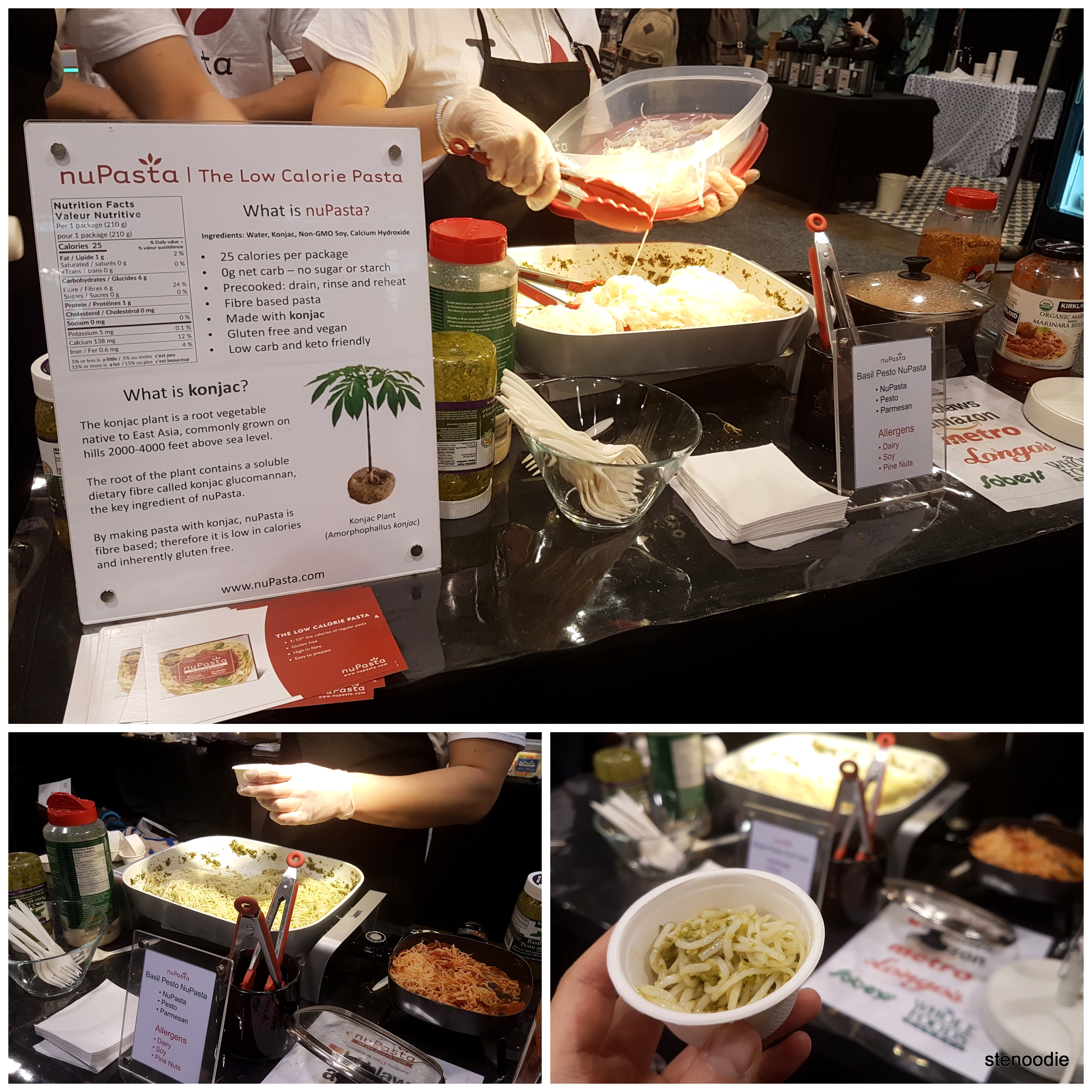 I liked the wild blueberry juice so much from Van Dyk’s Pure Wild Blueberry Juice that I went back to purchase a bottle before we left. 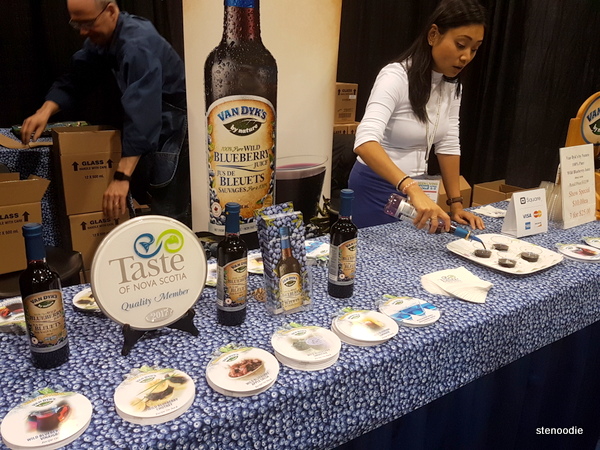 The taste was so refreshing and pure!

Why can’t more vendors use this type of disposable sample spoon called the EcoTensil?!  It’s not plastic and merely a small sheet of paper.  It’s so easy and definitely compostible too!  (Unfortunately the only other time I’ve seen this in use was in New York at Murray’s Cheese shop.)

Excellent job, Smile Natural Foods for using the EcoTensil to promote your products (and delicious superfood blend on yogurt)! 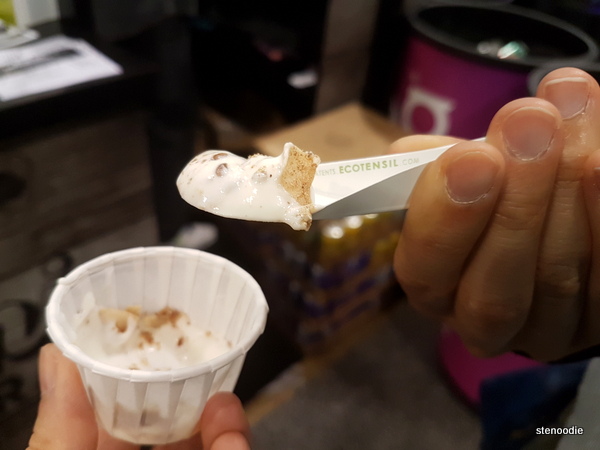 Best concept ever that every single vendor in the world needs to use! 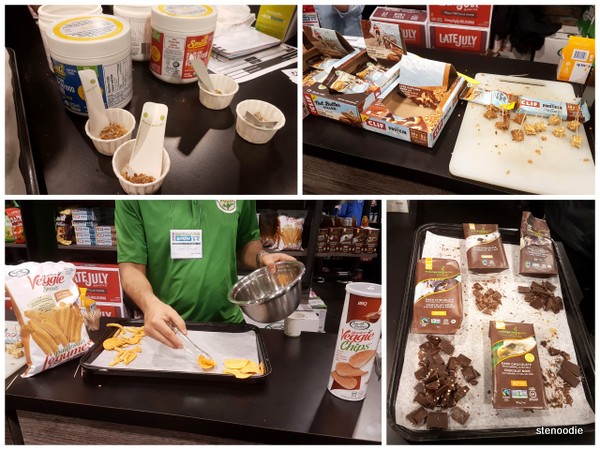 Best sample station was the L’Ancêtre Cheese Factory with three types of cheese!  I loved the Emmental Swiss Cheese so much I bought back a block for myself. 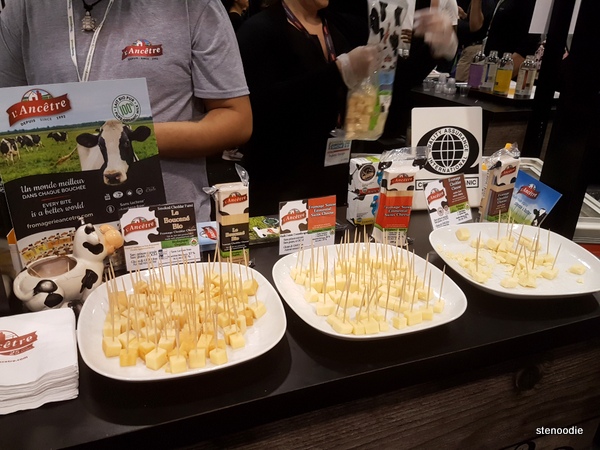 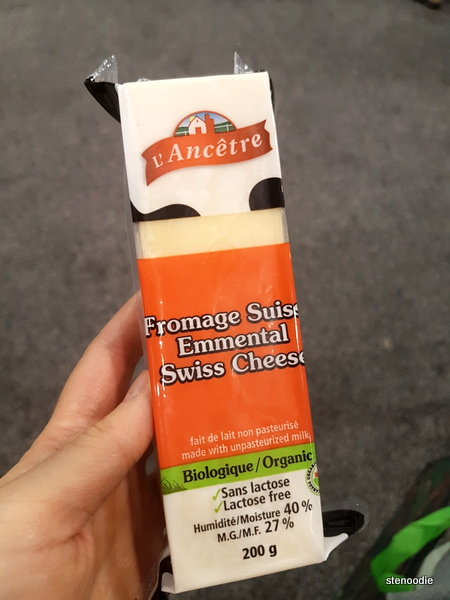 Coconut water in different flavours, bagels (didn’t try this though), and some coconut jerky. 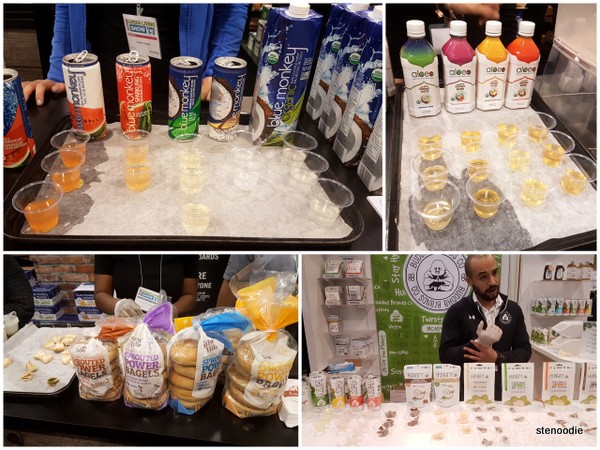 I loved this cluster of food vendors who were all very generous and willing to give out samples.  I understand not every customer will make a purchase after sampling, but when the vendor is generous about giving food out, I’ll try it without hesitation and it could result in a sale for them!  All of these food vendors were happy to give out many samples of their products. 🙂 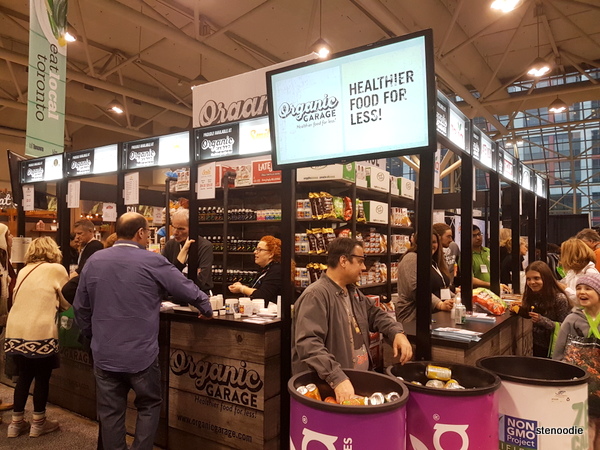 We proceeded to the other side of the show where we found some raw honey, vegan cheese, hot beet burgers, and superfoods juices. 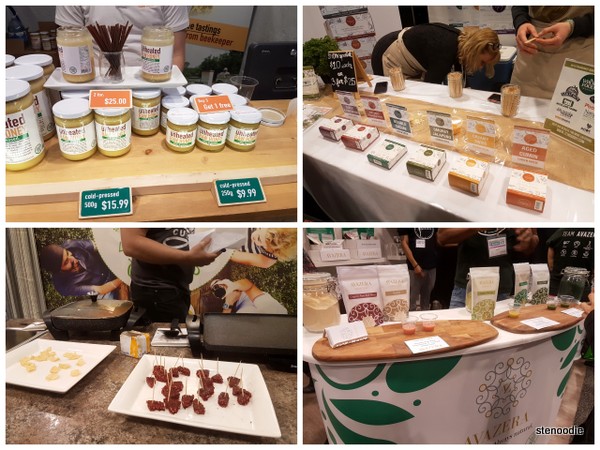 The Healthy Planet vendor where we got to try many varieties of kale chips… (read below for unfortunate circumstances….). 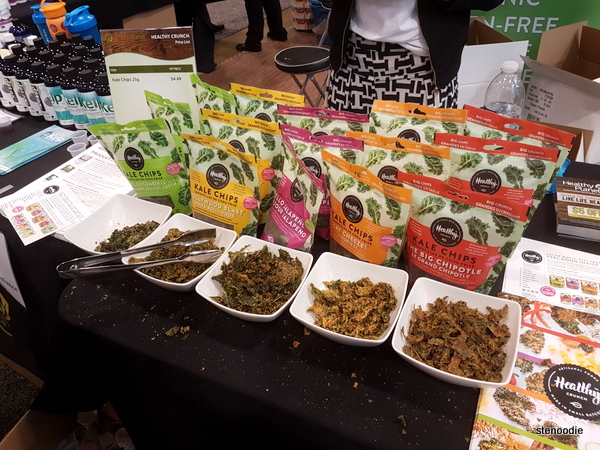 Kale chips from Healthy Planet (some of which were expired… ugh) 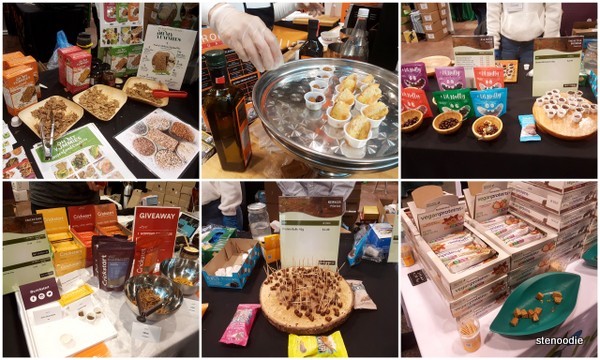 Harmony Organic Milk!  We tried the chocolate milk (so creamy and smooth) and how the mixture of buttermilk and chocolate milk made it taste like a drinkable cheesecake! 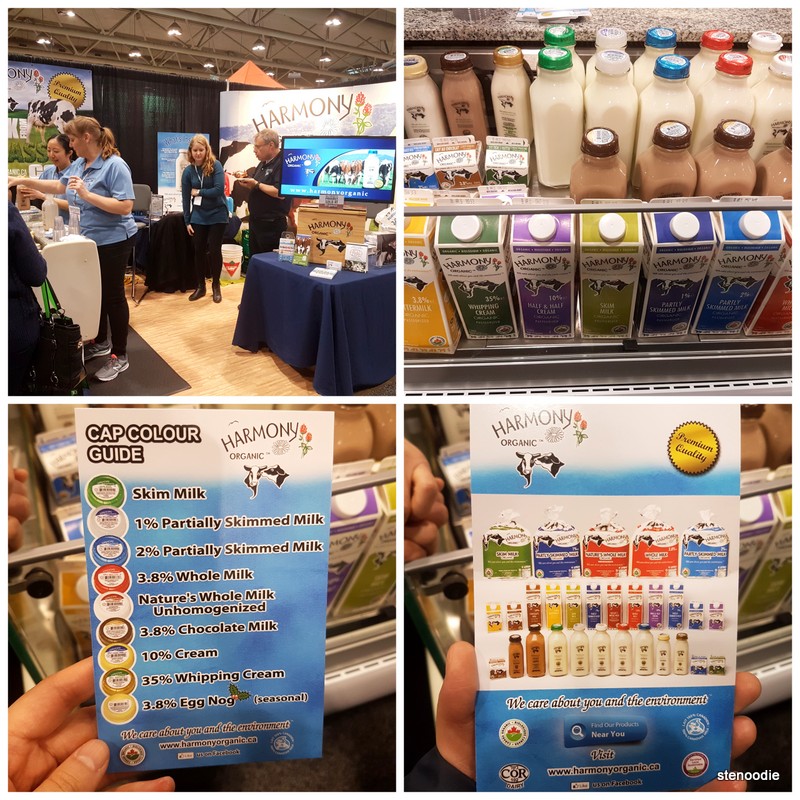 We also saw a vegan eco-friendly household items called Prism Care Corporation that was incredibly cheap.  It was $10 for 4 bottles of dish washing liquid or soaps or $10 for detergent with a free bottle of dish washing or cleaning sprayer.  I decided not to get any at the moment but definitely will keep this brand in mind for the future! 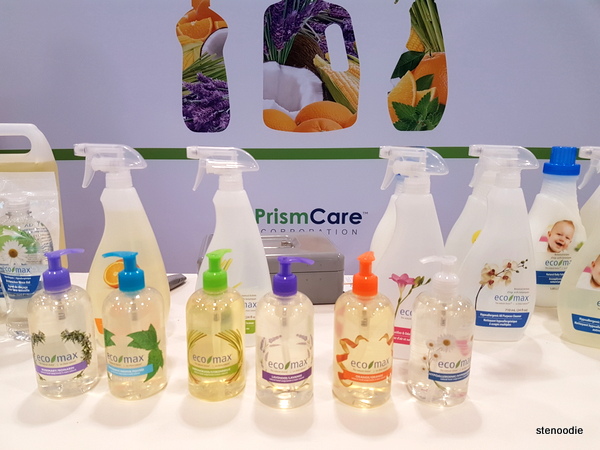 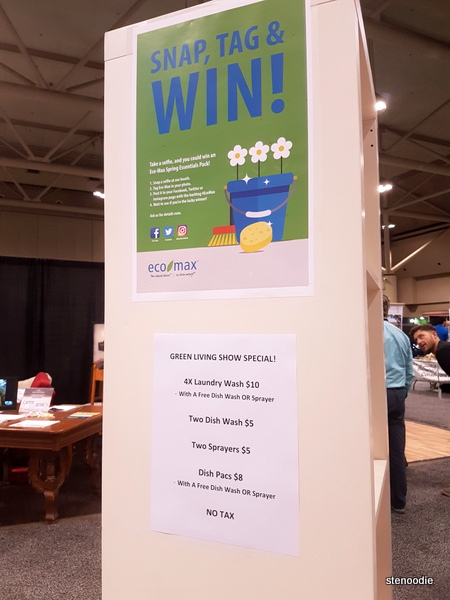 These were so cheap!

There was yoga and tai chi intro classes too. 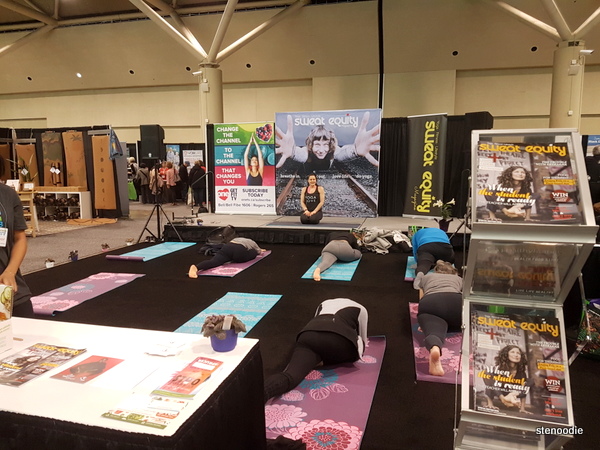 Seeing some of the eco cars and gas efficient cars were cool too.

I’d love to come back again someday to see what else they have next year! 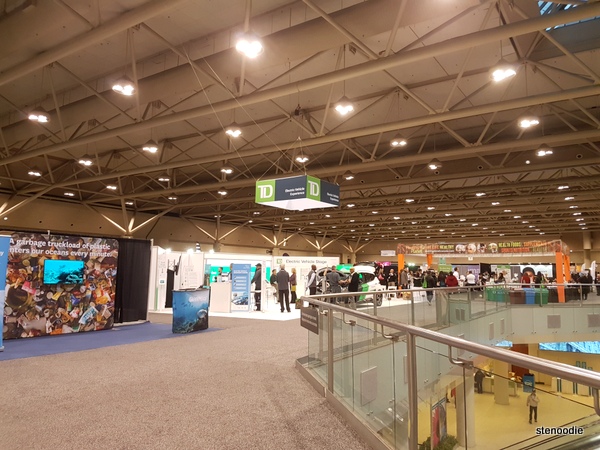 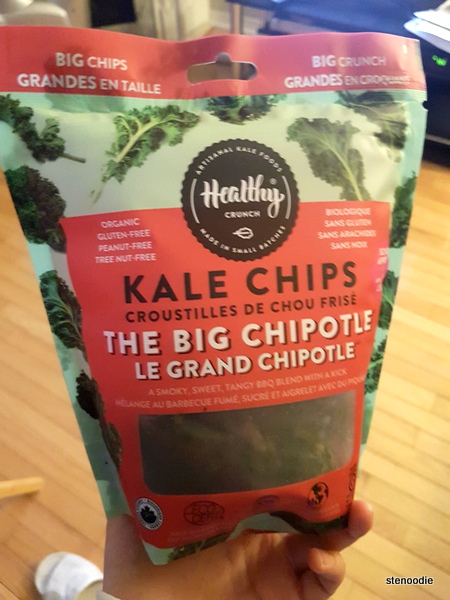 April 6, 2018:  A few days later, I opened the bag of Chipotle kale chips that I had bought from Healthy Planet.  I ate it after dinner with my mom.  Upon finishing the bag and throwing it out, I happened to take a look at the package and noticed that the “use before” date was past already!  It showed a past before date of November 2017!  That’s more than six months ago!  Healthy Planet had sold us expired products!

I informed Priscilla about this immediately and she checked her two bags that she had bought too.  Her Cheddar flavoured bag of kale was not expired but the Chipotle one had expired as well.  Wow, we were so disappointed and, most of all, ripped off!

That night, I had diarrhea and spent some time in the washroom before I felt better again.  I don’t usually have stomach aches! 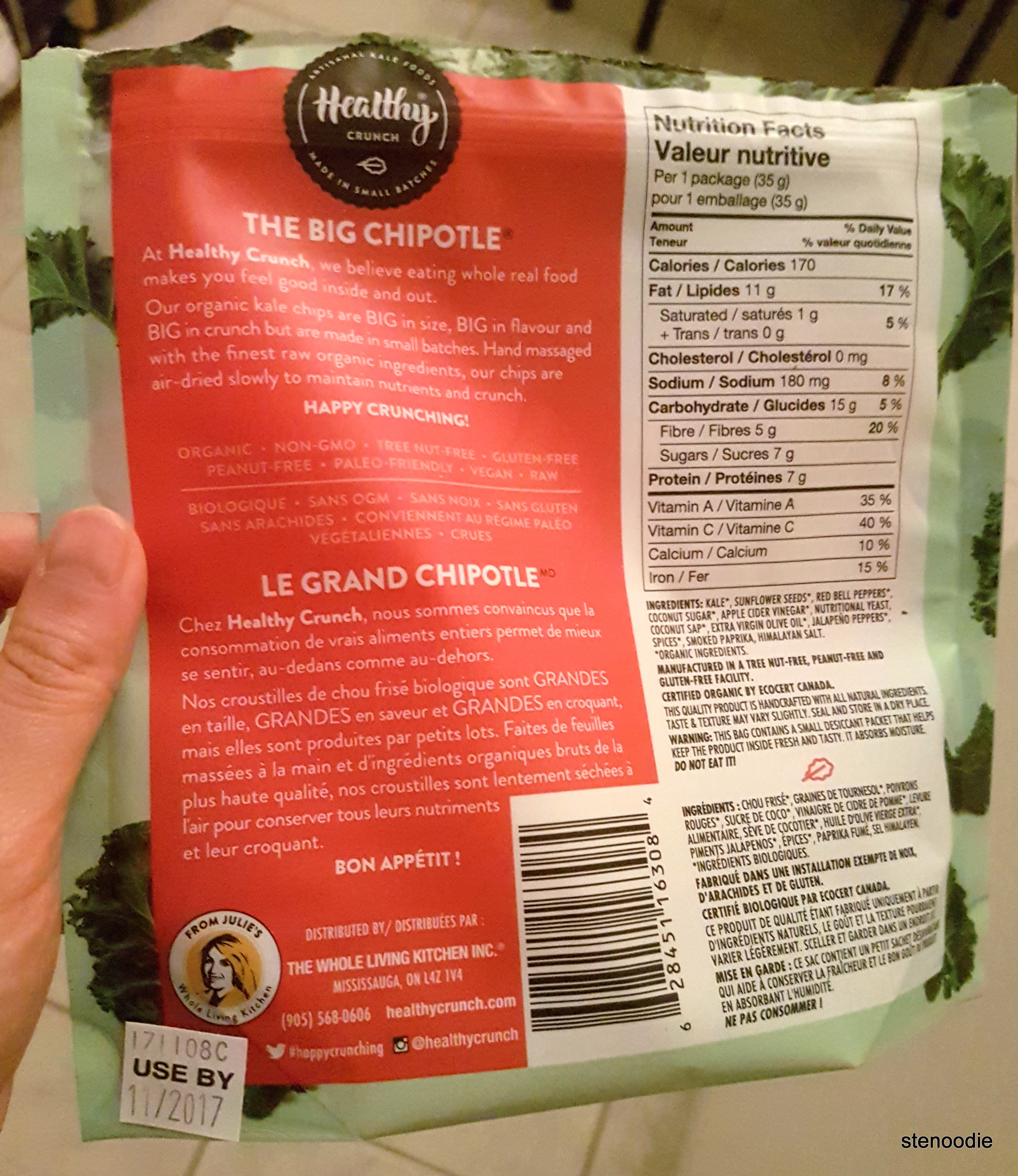 Healthy Planet sent me an automated e-mail to say that they had received my e-mail but that they would be following up with me later.  A few days later, I finally received a reply but this time it said that my inquiry was directed towards their “online sales” department and that to address my problem, I needed to call their office instead.  What the fudge.  What a waste of waiting time and then I still have to contact another department?  It’s garbage customer service.

Anyway, I’m very disappointed in Healthy Planet.  I haven’t reached out to them again or shared about this sale of an expired product at a large-scale show on social media either.  It’s unacceptable and disgraceful.  No vendor should be selling expired products at an exhibition show.

Update:  April 27, 2018:  Healthy Planet contacted me this week and followed up to apologize (it was a person this time and not an automated e-mail; hurrah!).  They informed me that they would never sell expired products and that they had done a full investigation to find that there was a labelling error such that the “use by” sticker was supposed to say “11/2018” instead of “11/2017”.  They compensated me with a box of kale chips to enjoy which arrived promptly today in the afternoon.

I’m content that their customer service rep followed up (although when I look at the calendar, it took them nearly a full month to address the issue).  I’m happy with the free box of kale chips — they were generous and I think I received a value of $50 worth of kale chips!  I hope they do better and never have any more labelling issues again.

5 Responses to First time to the Green Living Show 2018