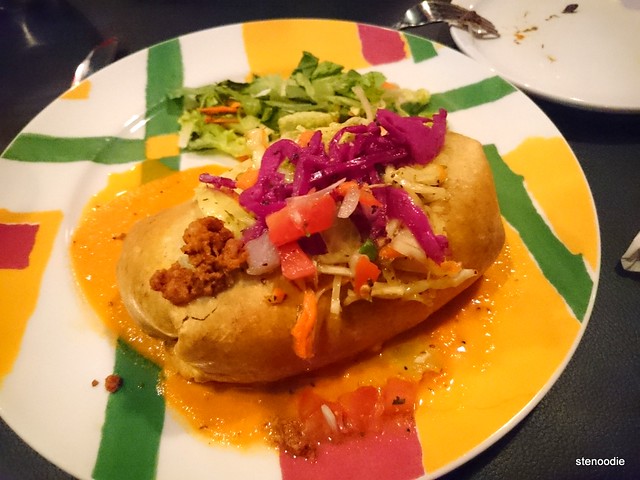 I think this is my first official time celebrating Cinco De Mayo!  Cinco De Mayo is a celebration in the states and Mexico every year May 5th on the calendar rolls around.  Before this, you’ll also hear people post jokes and memes of “May the 4th be with you” on the day previous.  (Haha.) 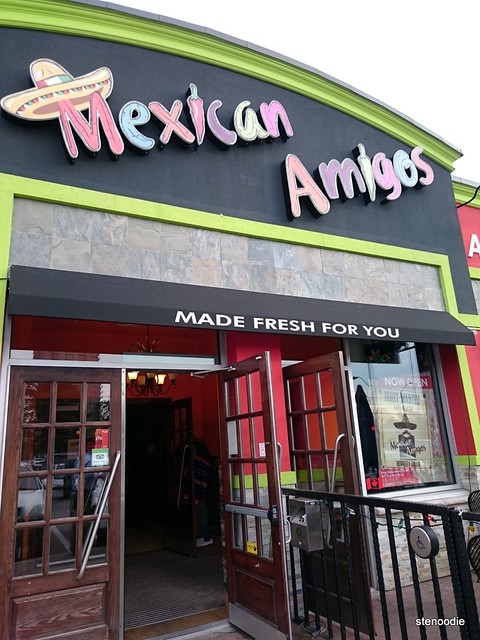 We celebrated together on May 5th at Mexican Amigos, the location at Don Mills and York Mills.  Juliana was kind enough to help us book a table big enough for all of us and even had the restaurant assign a party menu for us.  The party menu consisted of a soup or salad and fajitas for a set price of $25.  However, most of us were adventurous foodies and wanted to try the items on their regular menu.  I’ve already been to the Richmond Hill location of Mexican Amigos before.  From there, I can never forget the amazing fried ice cream that I had.  Delicious!

Sarah, Lawrence, and I shared the Zapata’s 9 Layer Dip to start.  It was a huge pile of crispy corn chips and a baked dish of refried black beans, tomatoes, onions, bell peppers, black olives, shredded lettuce, shredded cheese, sour cream, and salsa roja.  The top layer was all cheese that was baked together and it actually made dipping the corn chips into it rather difficult.  We had to pry it open and on some cases use a knife to separate the gooey cheese in order to submerge the chips into the rest of the dip.  The dip was pretty good but there were more refried black beans in there than I thought.  It was still a tasty starter. 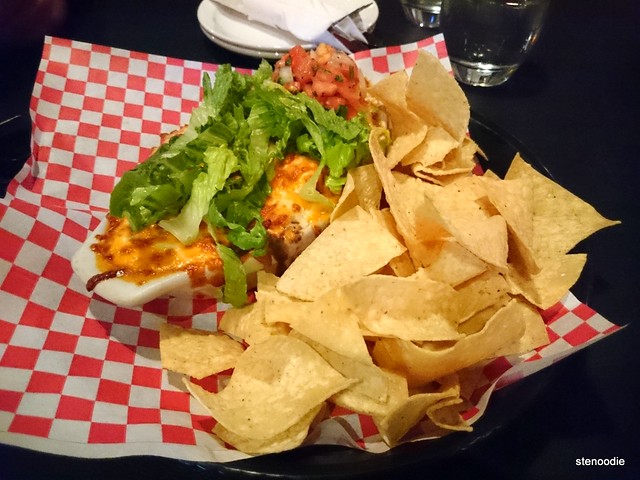 I must mention that before we received this starter dish, it actually took more than an hour for us to receive our drinks (most of us ordered water only) from the server.  I understand that we were a big group, but it was ridiculous how slow and inefficient the service was.  We had all arrived at 7 p.m. on the dot for when our reservation was set, but we didn’t get drinks until 8 p.m.  What the heck?  It also took us another 45 minutes to place our orders and by the time we actually received food on the table, it was 9 p.m.  Also, we had several people at our table who had their orders messed up and didn’t even get their food until 10-15 minutes later.  It was a horrific experience and almost everyone at the table was complaining.

Nevertheless, here is the Chimichanga that I ordered.  I believe this was the first time I had had Chimichanga after hearing a lot about it as a well-known Mexican dish.  The Chimichanga is a “deep-fried burrito that is popular in Southwestern U.S. cuisine and the Mexican states of Sinaloa and Sonora”.  It’s filled with ingredients like rice, cheese, shredded meat, and more; it’s very similar to a burrito. 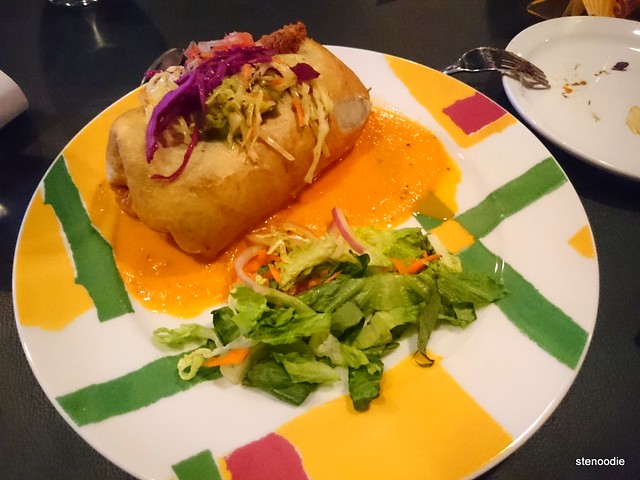 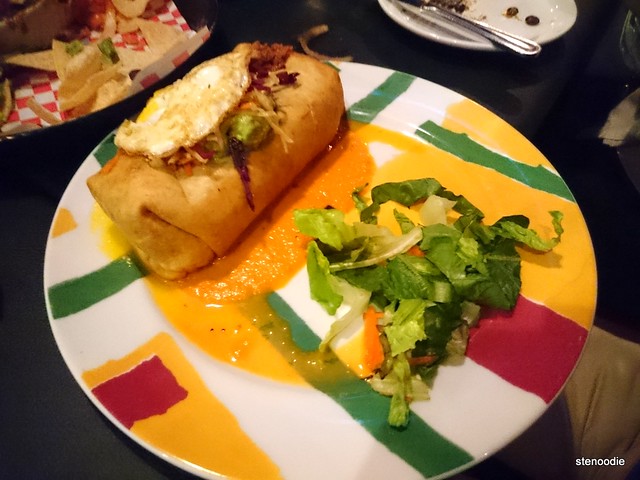 When I sliced my knife into the big deep fried burrito, I was surprised to find that it wasn’t as deeply fried as I thought; it was soft to cut.  It was huge though!  Although similar to a burrito, this was definitely something that you wouldn’t be able to hold in your hands to eat; you needed a knife and fork!

For the Chimichanga, you had the choice of having ground beef, shredded chicken, or chorizo as the meat part of the stuffing.  I chose chorizo (pork sausage).  However, I didn’t really taste the chorizo in the stuffing.  Nevertheless, it was delicious as I loved the blend of soft flour tortilla with the rich stuffing of rice, black beans, shredded cheese, and hardly detectable chorizo.  It was a lot to finish along with the house salad. 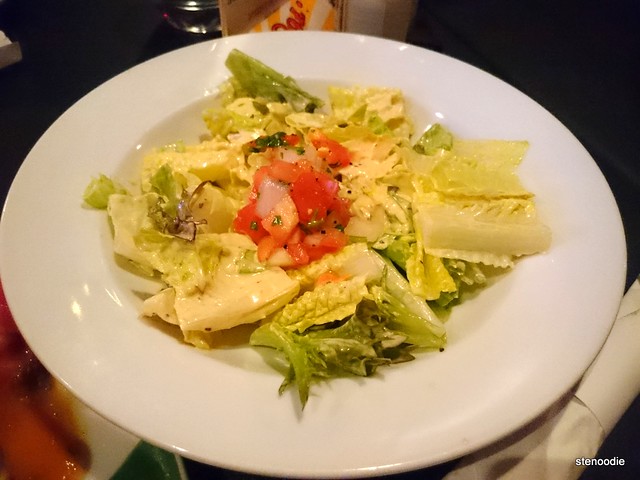 The house salad, while simple, was actually very good

Although the food was delicious, I don’t think many of our friends are going to return to this restaurant.  The service was simply too ridiculous.  It took over 2 hours to serve us while it really only took us an hour to eat.  Why did it take so long to take our order?  I recommend that Mexican Amigos re-evaluate the way they serve big parties of 15+. 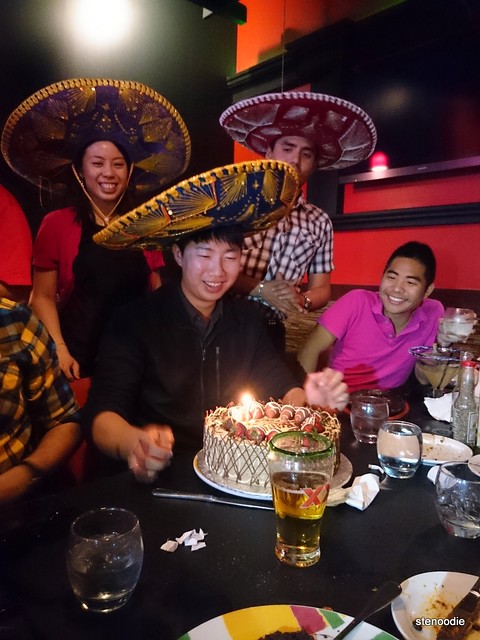 Oh, and at the end, we had a surprise cake for Ronny as it was his birthday the next day.  It was nice that the restaurant had huge sombreros for us to wear and take pictures with.  I couldn’t believe that the cake-cutting fee was $2 each though.  I think we would have preferred to cut the cake ourselves.  That coffee birthday cake was delicious though! 🙂