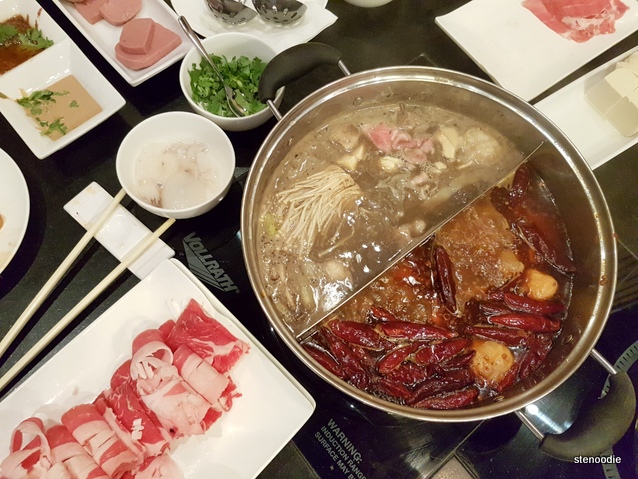 Morals Village Hot Pot (德莊火鍋) started from a store in Markham and then expanded to four more stores in the last couple of years.  They have recently opened a sixth location in Ottawa as well!  They are a high-quality all-you-can-eat hot pot restaurant chain that specializes in superior hot pot foods and customized soupbases and has over 600 locations globally.

I RSVP’ed to the celebration dinner at the Markham location (which I have been to before and actually the very first Morals Village Hot Pot location that I went to — blogged here).  I arrived promptly at 6:30 p.m. and some foodies had already arrived at the table.  We were situated in a private room in the restaurant where we had a long table full of stovetops that were ready to be placed with boiling pots and lots of fresh varieties of hot pot food. 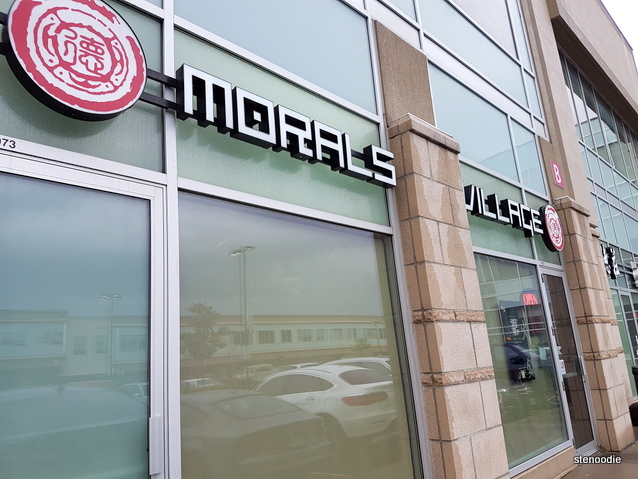 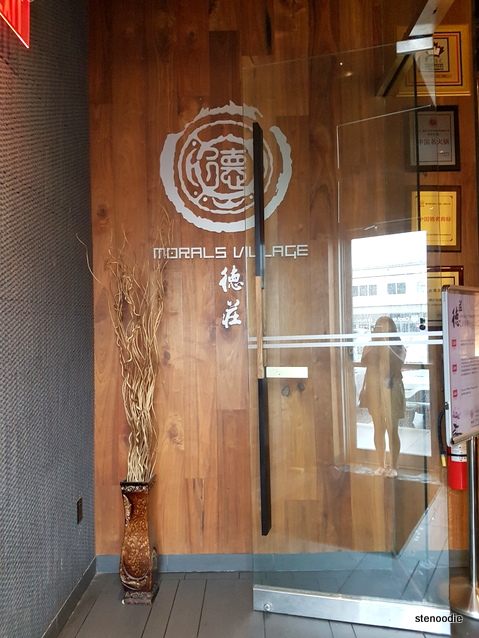 You can see me in the reflection of the glass door 😀 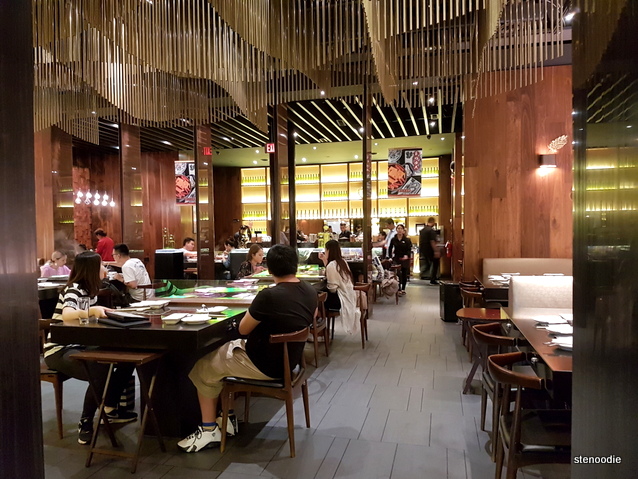 First view of the restaurant when you walk in 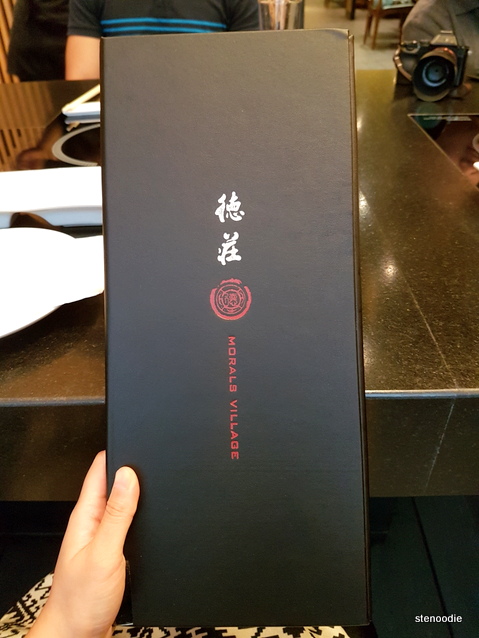 They revamped their menu! It looks so nice now!

Maggie and Walter were the hosts of the evening and we were welcome to order practically anything off of the menu.  We started off with drinks.  I ordered the ever-delicious Homemade Plum Juice.  Everyone else ordered their Fresh Blend Watermelon Juice (one person, like me, strayed from the popular vote and ordered the Kiwi Juice).  I love plum juice and especially during hot pot since it helps to neutralize the acidity in the “hot air” food that we ate. 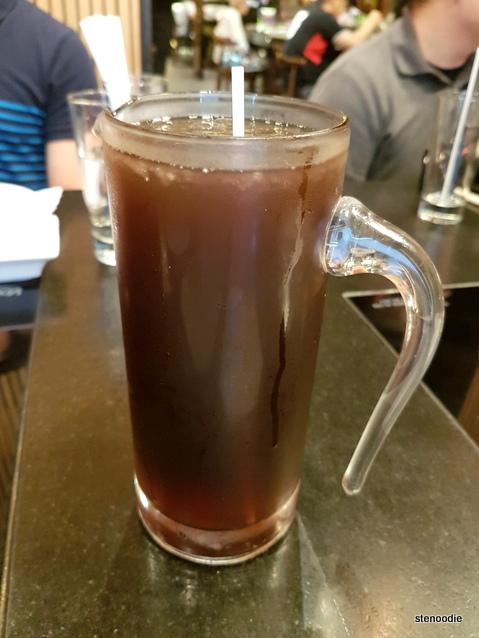 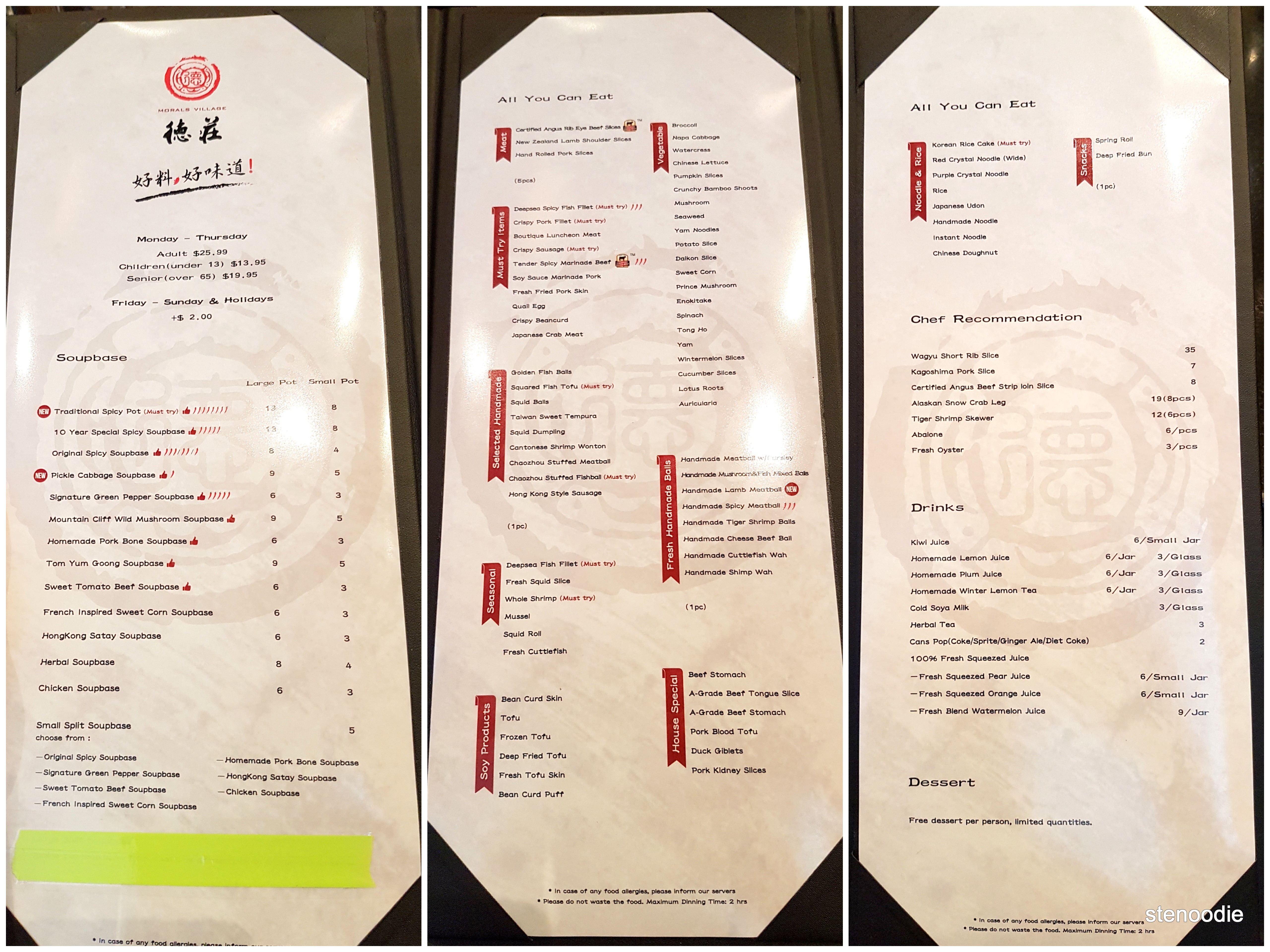 We were treated to order any soup base that we wanted.  I ordered the small split soupbase pot of Sweet Tomato Beef Soupbase and French Inspired Sweet Corn Soupbase.  I hadn’t tried the corn one before.  I remember the Mountain Cliff Wild Mushroom Soupbase was really good too when I had ordered it the very first time around but that one wasn’t available in a split pot.  I enjoyed my two choices of soupbases.  The Sweet Tomato Beef Soupbase tasted strongly of rich tomatoes and the French Inspired Sweet Corn Soupbase really did taste like soup.  (I asked for a bowl and spoon at the end of the meal in order to drink the soups — it’s a great tip when hot potting and you should try it too!) 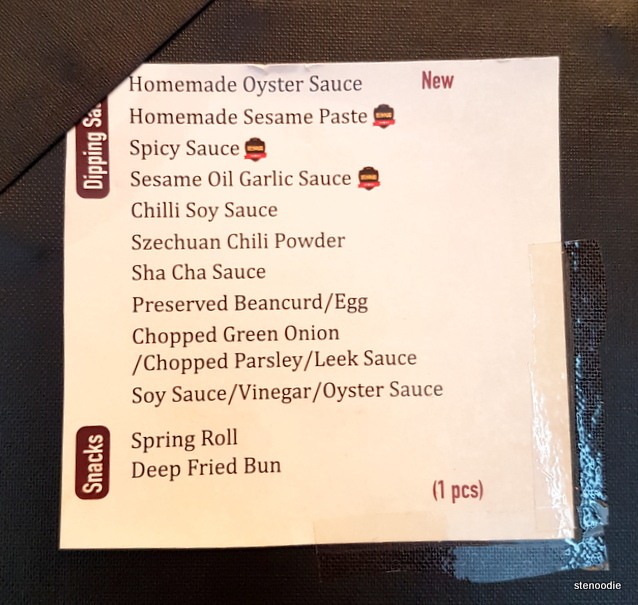 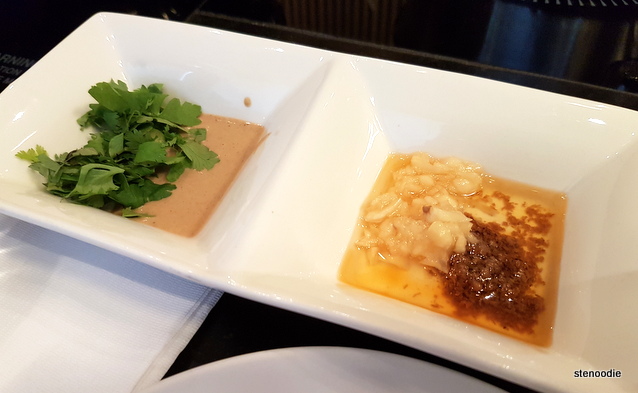 On this visit, I discovered that garlic sauce goes amazing with hot pot!!

Jessy helped us to order a round of popular and generic hot pot items to start off the night since it was probably easier to order as a group than individually.  I was fine with this.  Since I had been to Morals Village Hot Pot at least three other times now, I was well informed of the food items and varieties that they offered so I was not in a rush to try all the items.  Also, since I had been eating out so much lately, I really wanted to eat clean so I opted for mainly veggies that night.

I did try other items other than veggies.  The standout items I had were:  A-Grade Beef Tongue Slices (this was sliced so thinly — you must try it!), Deepsea Spicy Fish Fillet (delicious and very spicy), and Boutique Luncheon Meat (something about luncheon meat that goes so well with hot pot…). 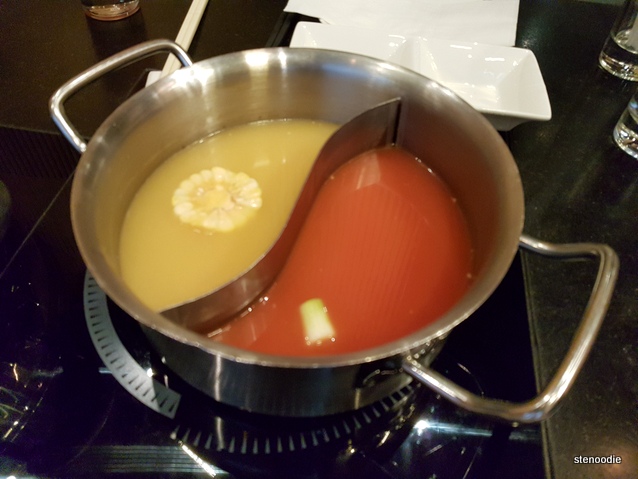 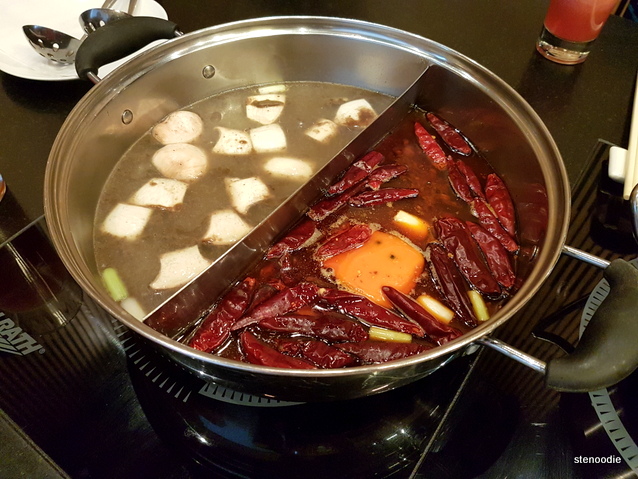 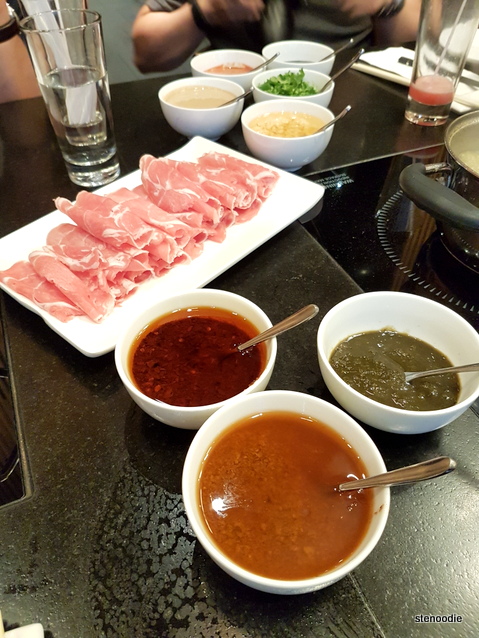 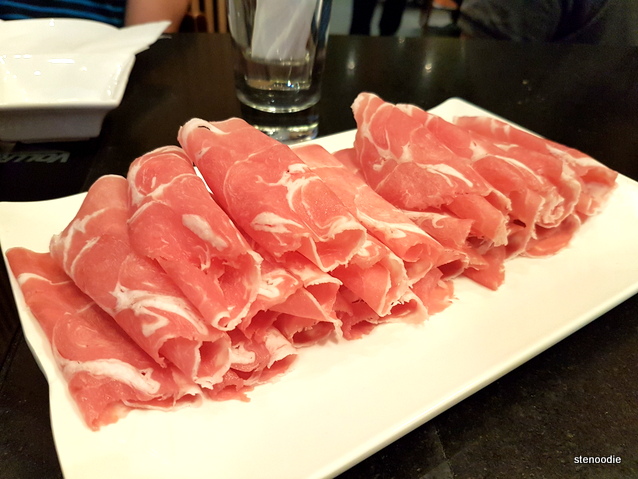 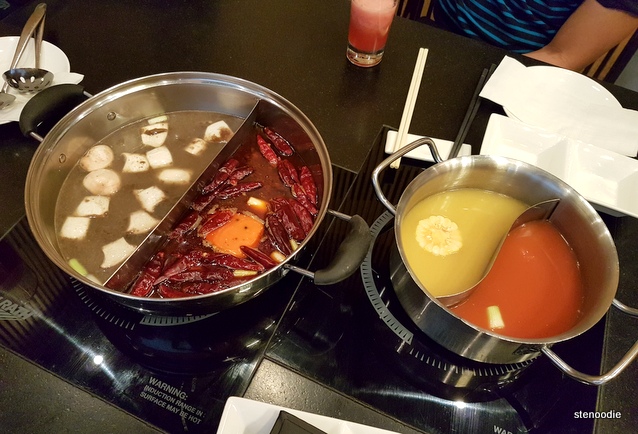 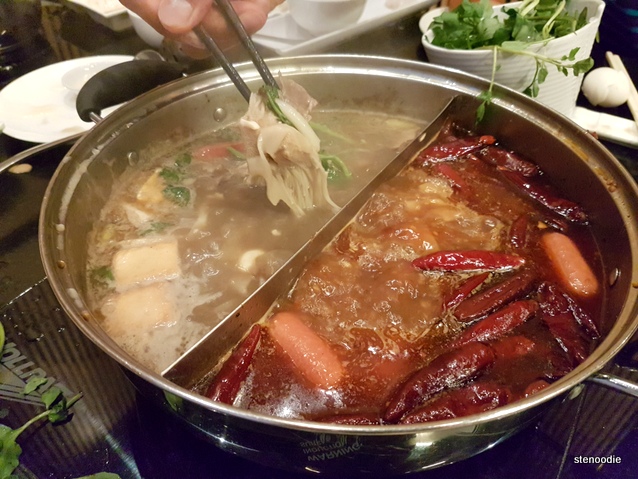 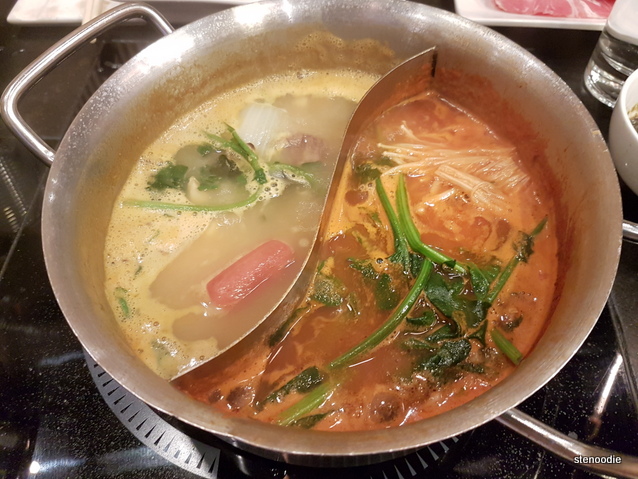 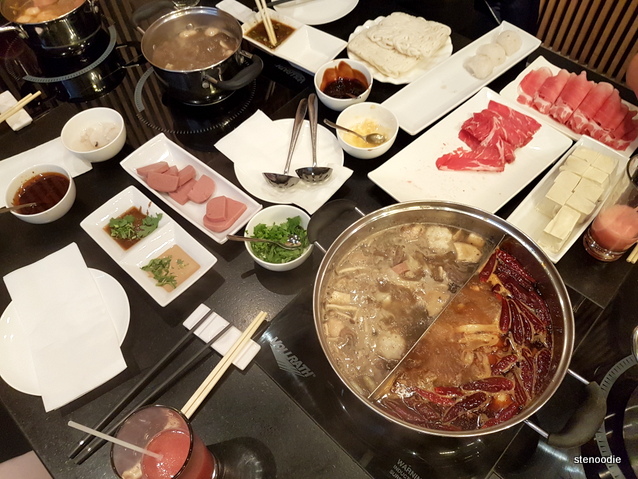 Our side of the table

It was a very satisfying and filling dinner. 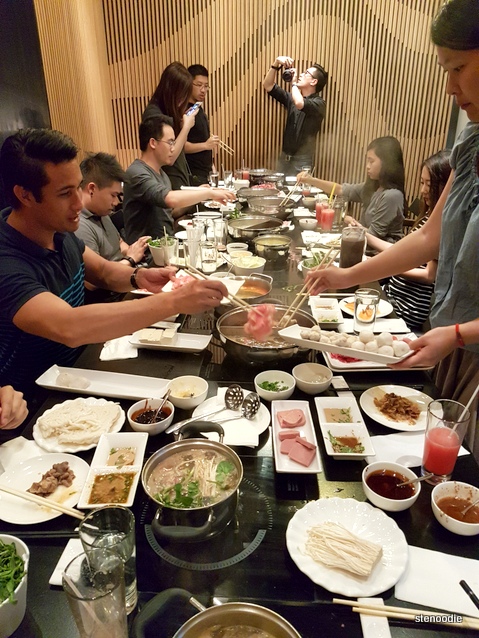 The table was quite high. I wouldn’t have minded standing up during the whole meal but when I realized that everyone else was sitting, it felt weird to be the only one standing XD

At the end of the night, we had soft serve ice cream to complete the night.  They offered vanilla, matcha, or matcha and vanilla twist soft serve.  Almost everyone opted for the twist option.  This was a very light soft serve but a good finish to the meal. 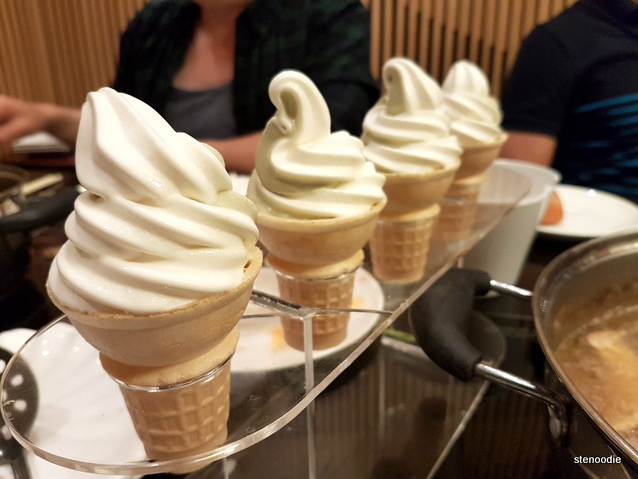 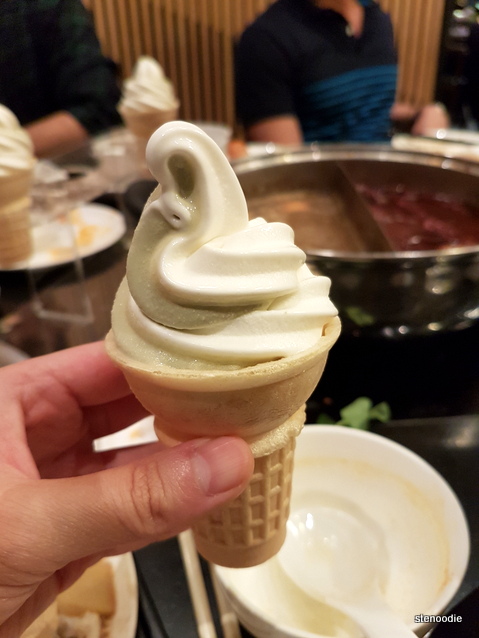 FTC Disclaimer:  Although Morals Village Hot Pot reached out and invited me to a complimentary tasting, the opinions expressed here represent my own and not those of the restaurant.