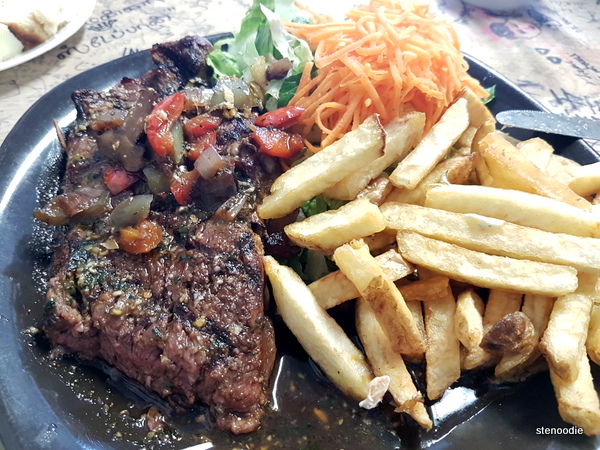 February 24, 2018:  I had heard all about Bullocks’ Bistro in Yellowknife and definitely knew that I wanted to visit if I had the time to.  I read about it both in Stephanie’s blog post when she went to Yellowknife and also when my mom read another blog post that said if you go to Yellowknife without visiting Bullocks, it’s like you never even went to Yellowknife.  For that reason, I’m really glad that after our dog sledding adventure, our tour guide was able to accommodate my request to drop us off at Bullocks’ Bistro.  It needed no introduction and he already knew where it was.  When he got off the car, he told us that there was going to be a wait list for us to put our names. 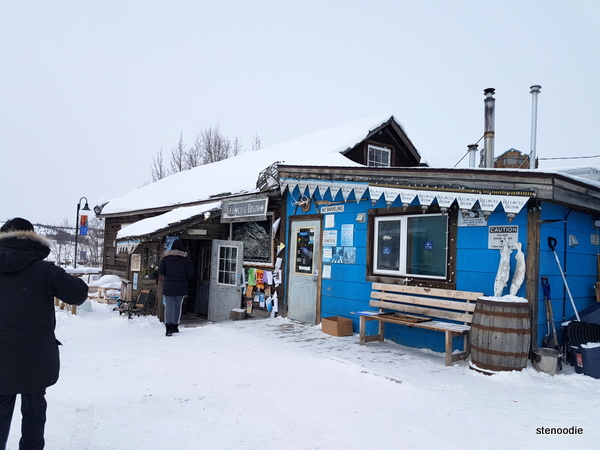 Lo and behold, there was indeed a wait list when we got there.  It was a clipboard of names pinned up in their small vestibule.  We signed our name on the clipboard and waited to be called in.  It was about 20 minutes of waiting with two parties ahead of us. 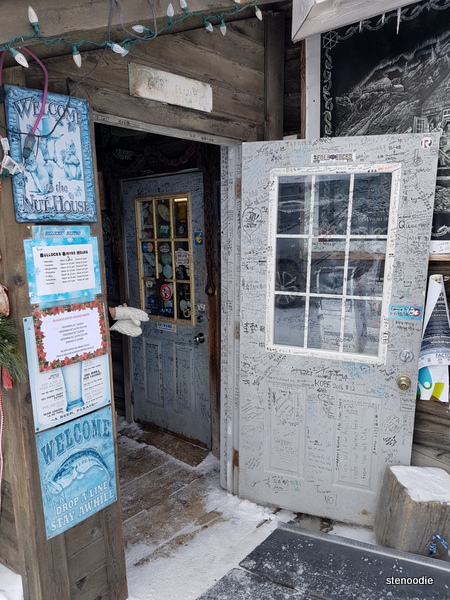 Any surface that is blank, it has been taken over by comments and signatures 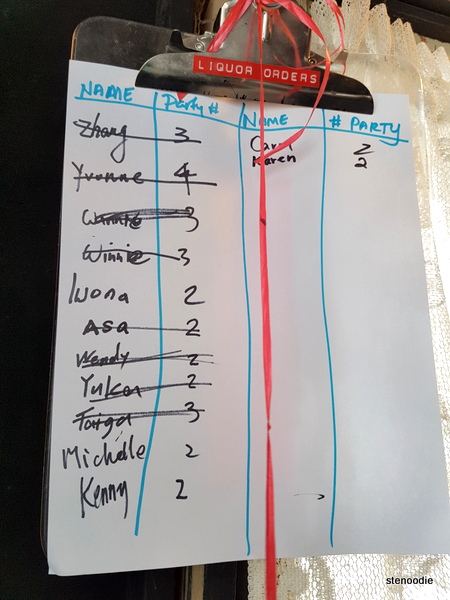 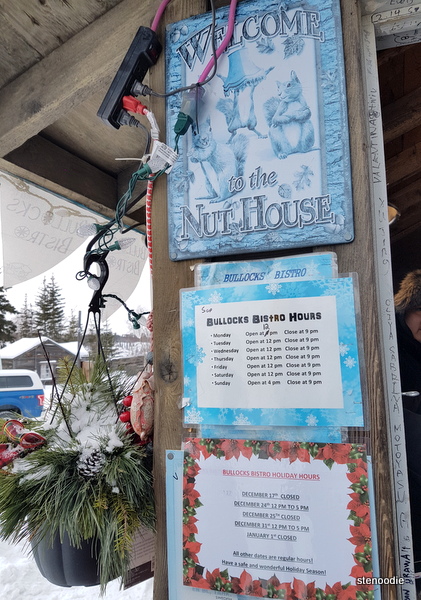 Once inside, I admired the local aesthetics of the restaurant.  It was a tourist hotspot with thousands and hundreds of previous tourists who had left their marks with notes, photos, business cards, receipts, airplane ticket snubs, and messages all over the wooden table, wall panels, and ceilings.  It was definitely a cool spot to dine in.  I’ve never seen anything like it before! 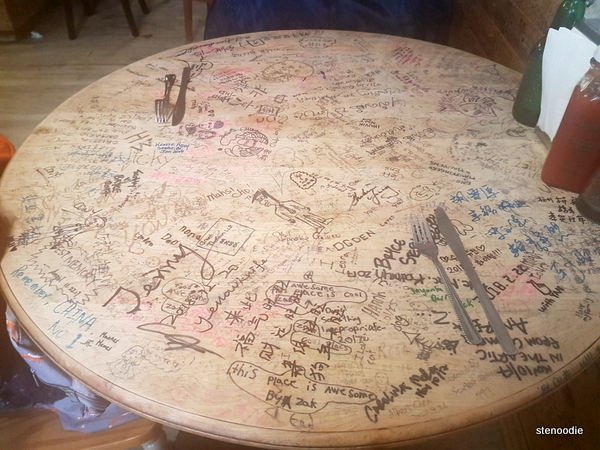 Table covered with signatures and comments 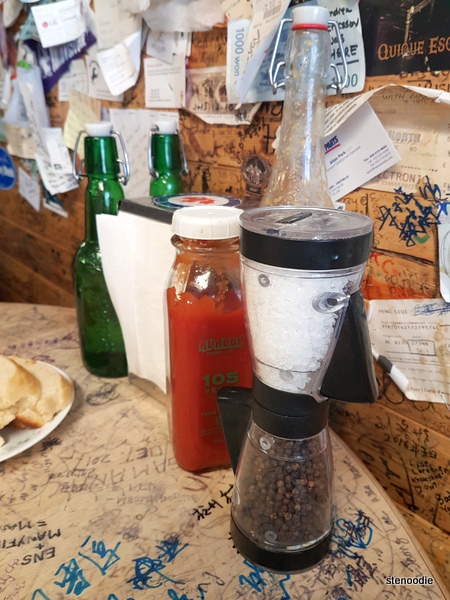 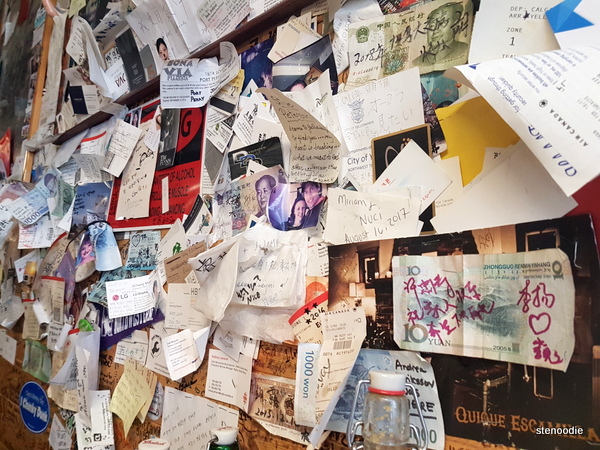 Notes from all over the world 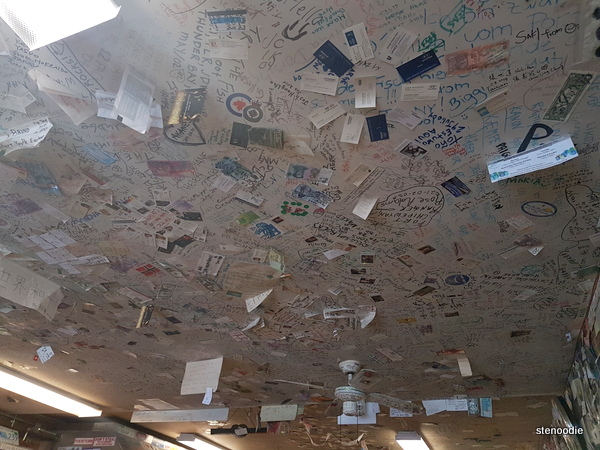 Even on the ceiling!

The only server (who was also the hostess and cashier) gave us utensils and the menu right away.  She illustrated with a marker to the laminated menu of the items that were available to us that day.  It seems they had a rotating menu of available items. 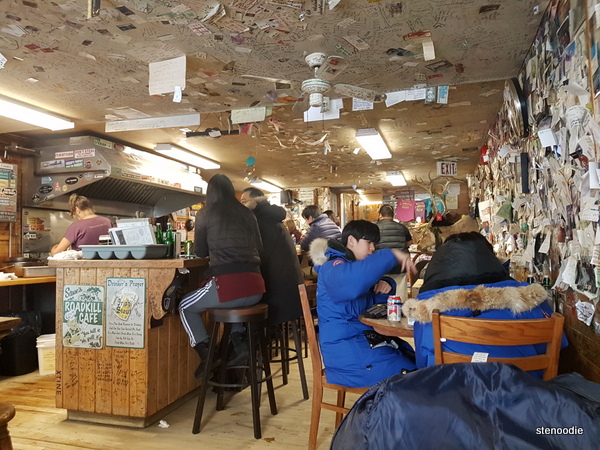 View of the restaurant from my seat

The menu came with an accompanying sheet that showed how grilled, pan fried, or deep fried looked like in photos and which corresponding items matched up with which type of cooking.  It made it easy especially for those who don’t speak English well to order effortlessly and this method breaks the language barrier a bit.  This is also when you know you have ventured into a popular tourist spot catering to many non-English speakers. 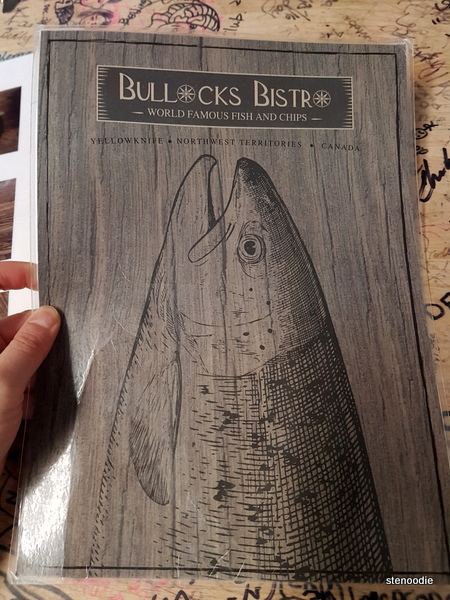 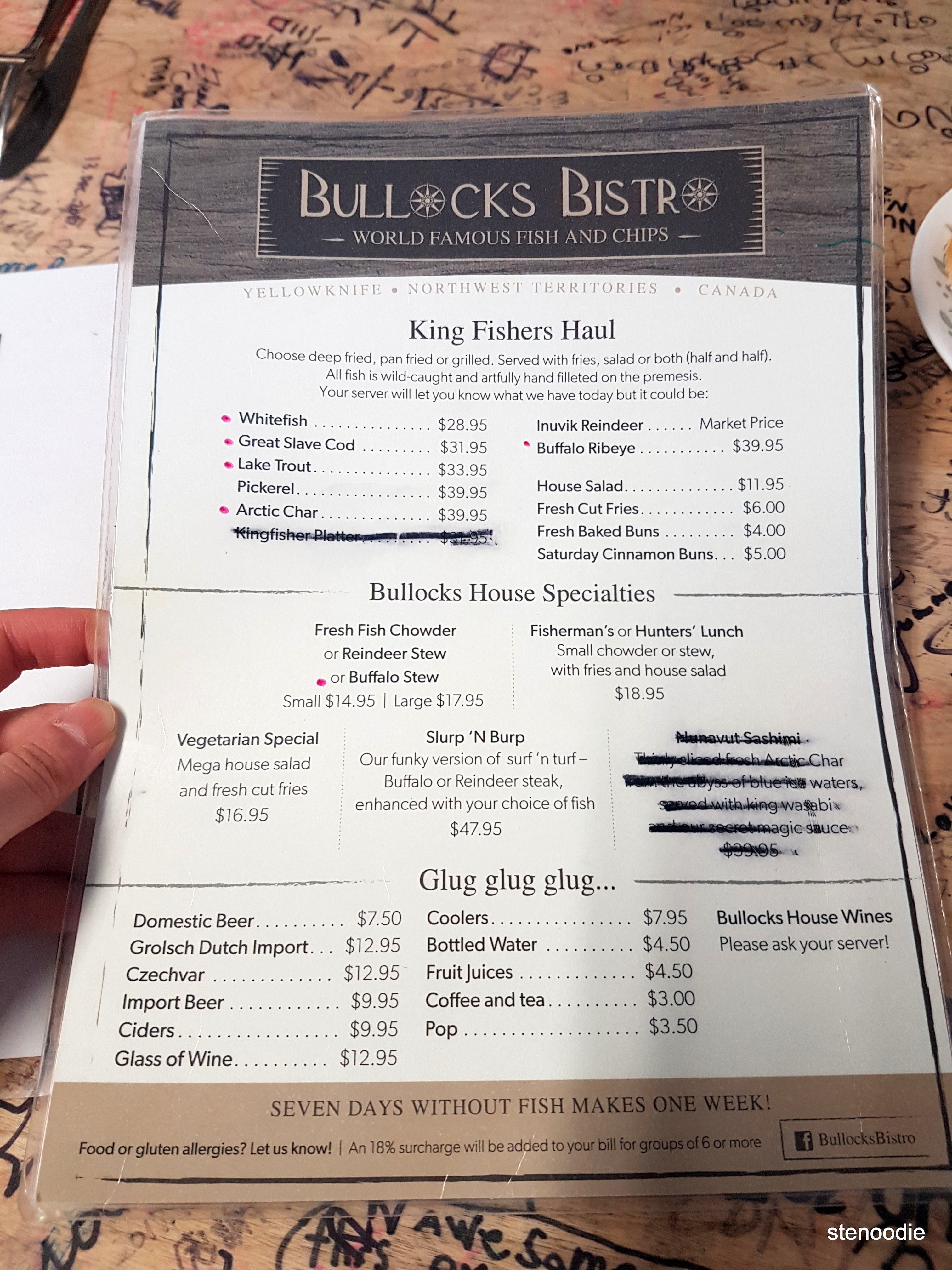 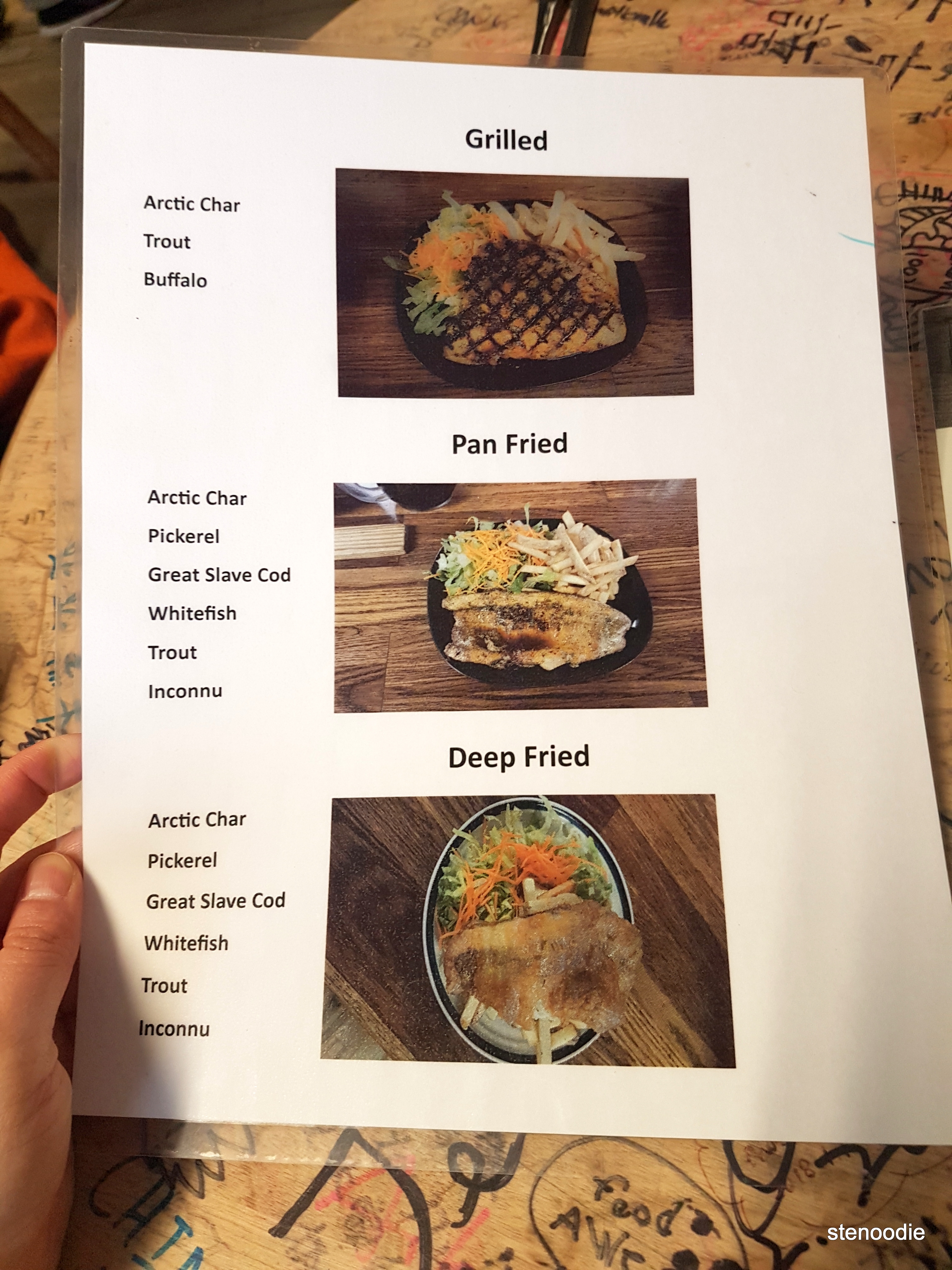 Helpful accompaniment to the menu

The server also gave us a plate of freshly baked bread with butter and cinnamon bread buns.  I couldn’t resist and tried one of the cinnamon buns immediately.  It was good!  We then placed our orders with the server.  (Service here was curt and straight-to-the point.  Since they have so many customers and are so popular, the server was no nonsense when it came to ordering, which some people might perceive to be rude.)

I tried the sliced bread with the butter and it was so good!  (The tour guide also mentioned their bread was good.)  It was soft and a bit chewy :). 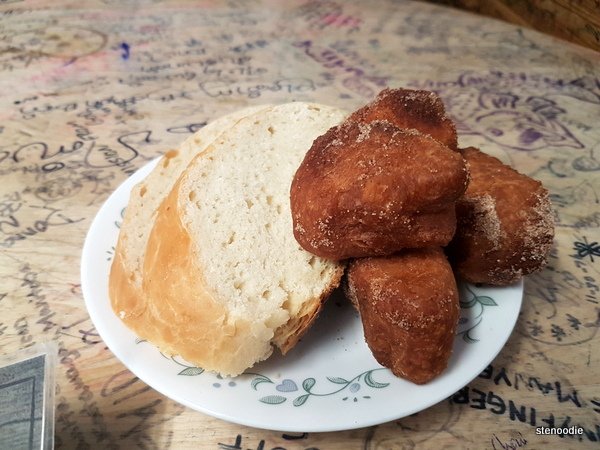 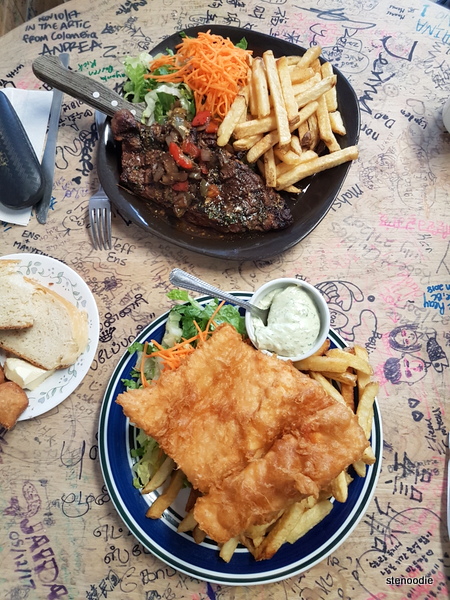 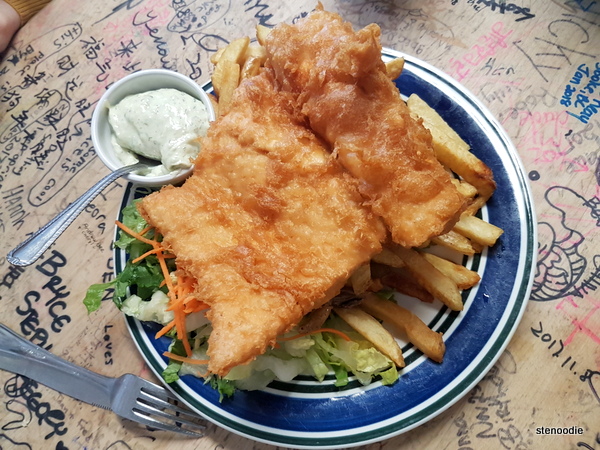 The Deep Fried Arctic Char and Grilled Buffalo Ribeye plates arrived shortly.  The portions were large and the food looked so good.

The arctic char was like a salmon and I was glad that the meat was moist enough and quite tasty.  Like the Elke’s Table from last night, the tartar sauce here was impeccable and improved the arctic char’s taste by a lot.  Their tartar sauce was provided in a small container with a spoon. 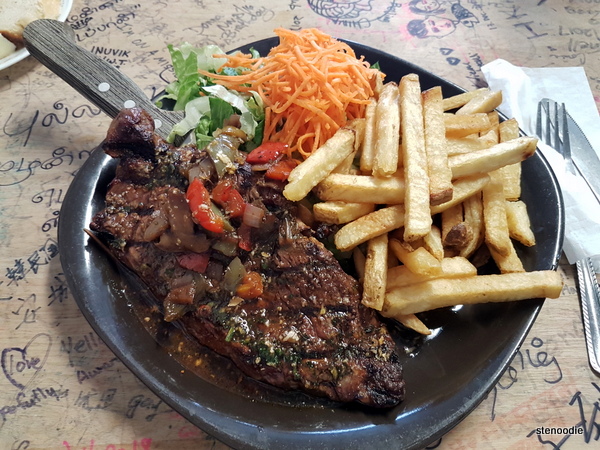 The Grilled Buffalo Ribeye turned out to be the highlight of the meal despite Bullocks Bistro being most well-known for their fish and chips.  The buffalo ribeye was so tender and not chewy at all.  It came out in a nice medium rare as I had asked for.  Best of all, it came in a pool of sauce with sautéed red peppers and onions.  It was so delicious! :9

The salad was nice and fresh with the salad dressing self-serve on the table in a glass bottle.  I was so impressed with the fries too.  They were extra delicious when sopped up with the steak sauce. 🙂 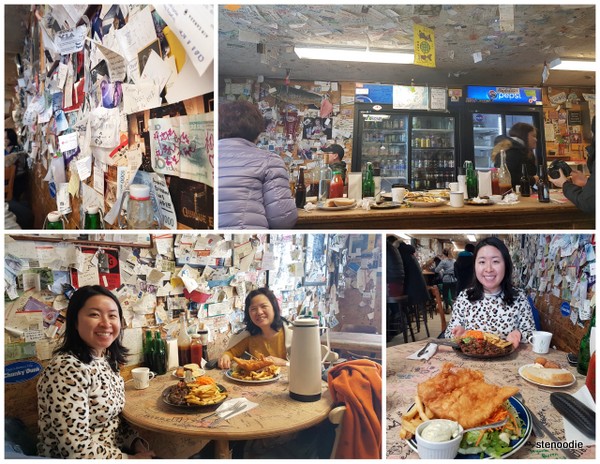 After our satisfying meal (we couldn’t even finish everything and doggybagged it. Good thing we didn’t end up ordering the Buffalo Stew after the server told us our order would be too much with a third item), we returned back to the hotel. 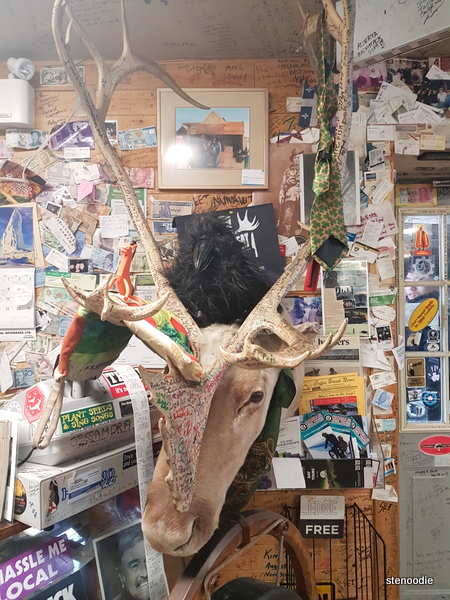 So many interesting decor pieces 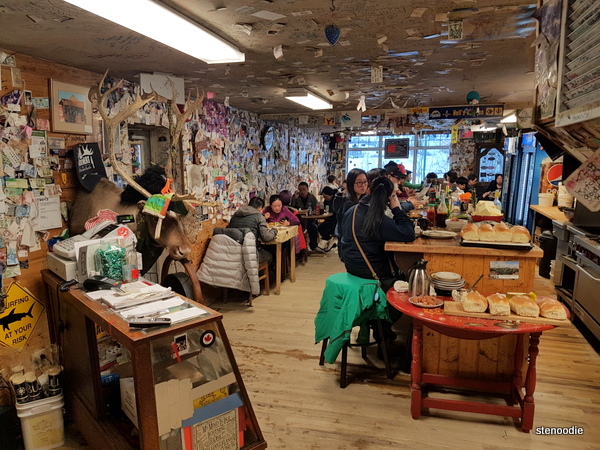 Inside of the restaurant 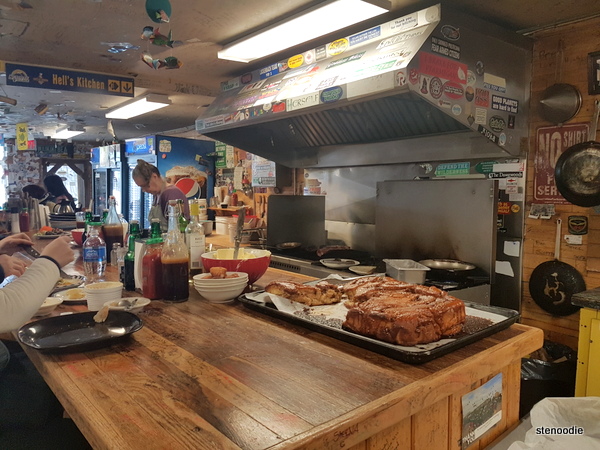 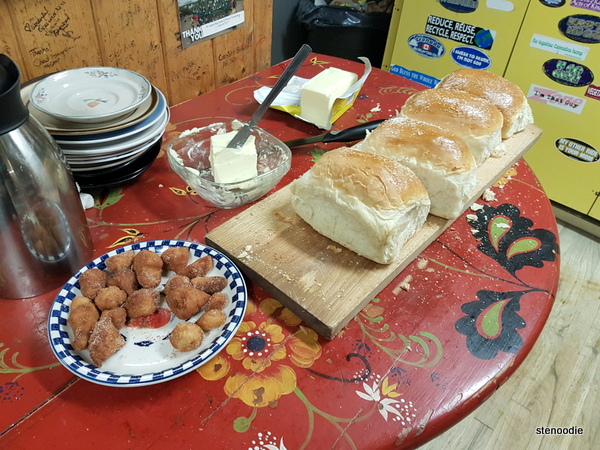 Bread and butter and cinnamon balls

So glad that I got to try Bullocks Bistro!  It really is a must-visit for tourists who come to Yellowknife.  If you come with a group, definitely share the dishes so you can try more of what’s on the menu!

1 Response to Bullocks’ Bistro in Yellowknife