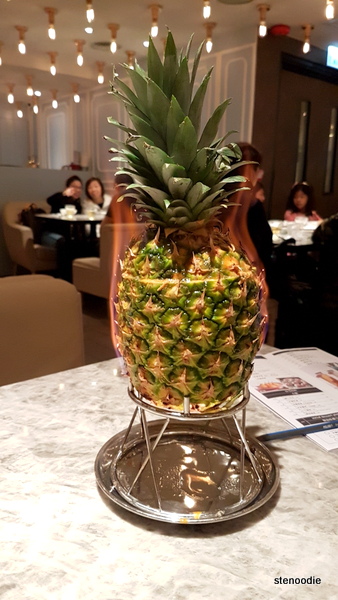 My cousin brought us to Social Place (唐宮小聚) for dim sum.  It wasn’t until we arrived that I realized it was such a trendy restaurant for Shanghainese food and dim sum (branded as contemporary Chinese cuisine)!

It was a Saturday at 12:45 p.m. and we weren’t surprised at all to see lots of people waiting for a table when we approached the restaurant on the third floor of the mall.  I recognized the queuing system immediately from when I used it at a previous Chinese restaurant in Tai Po.  I keyed in the number for our party and we were issued a paper ticket showing our number in line.  I liked this system.  It ensured that others couldn’t butt in and that it was indeed a first-come-first-serve sequence of obtaining a table. 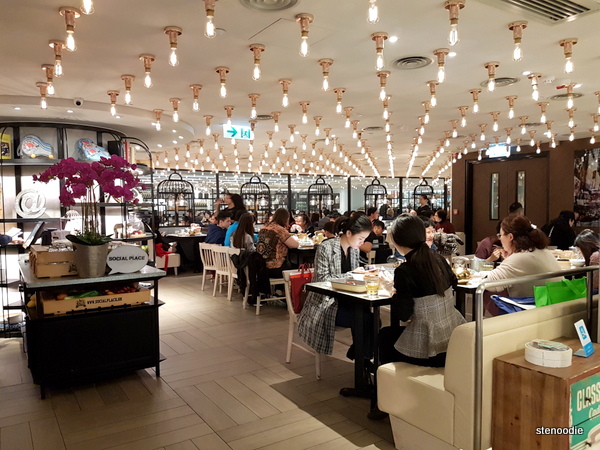 First look of the restaurant from the mall 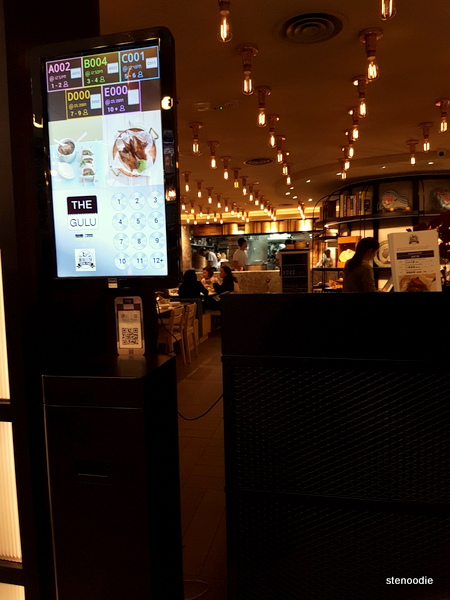 The category of tables for 3 to 4 people moved quite fast.  We were able to get a table after waiting for 45 minutes.  In the meanwhile, I could spot the dishes that people were ordering from where I was standing.  There was a “piggy” bun that I’ve seen before in photos online and also a flaming pineapple on another table.  It looked so cool! 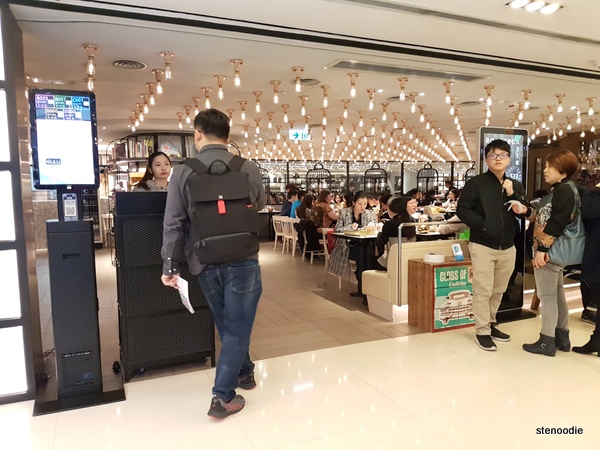 View of the restaurant from the mall 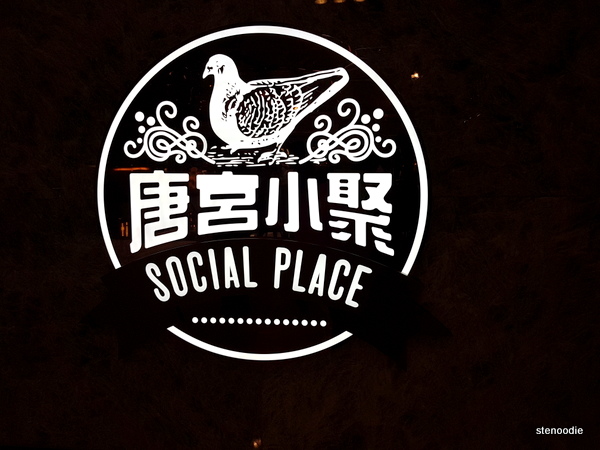 When we got our table, I realized that there were actually more seats inside the restaurant than I thought.  The design of the restaurant made it look as if there was a mirror reflecting the outside. 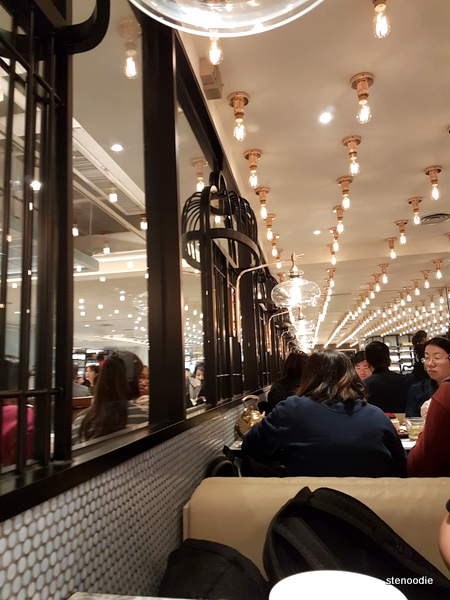 Don’t be alarmed when you see ants inside of your bowl.  They are meant to be there. 😉 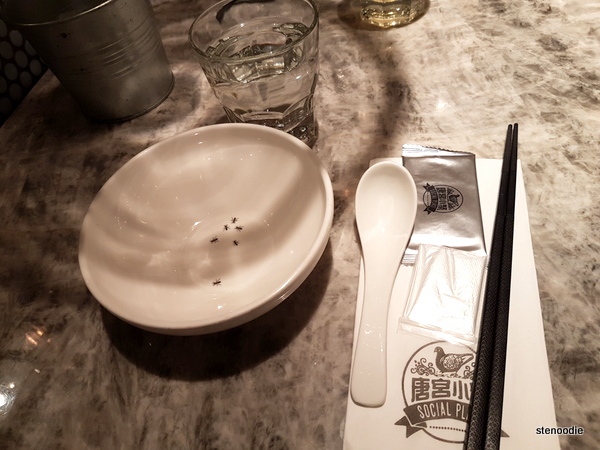 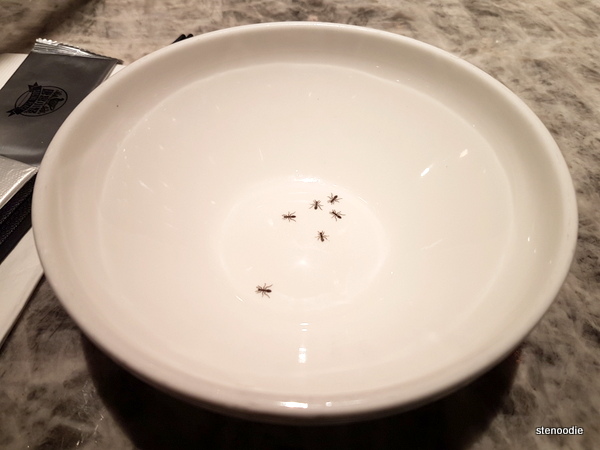 Ants in the bowl!

We ordered a few things from the order sheet to share.  Everything looked aesthetically pleasing to the eye and creative.  Unfortunately, the Sweet Potato Piggy Bun (紫蓉豬豬) I saw and wanted to order was out of stock already when we placed the order.  The order sheet had English names next to each item too. 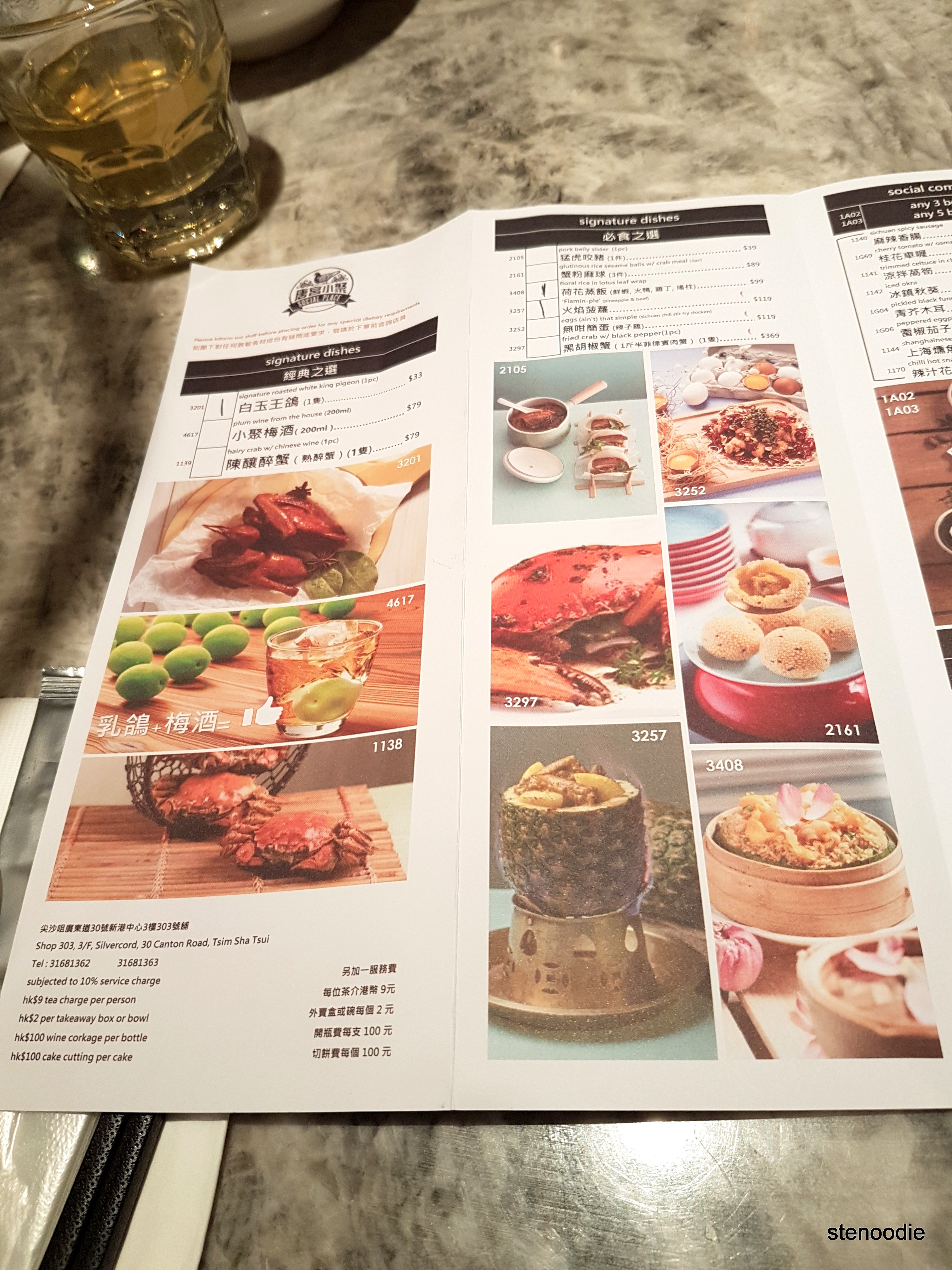 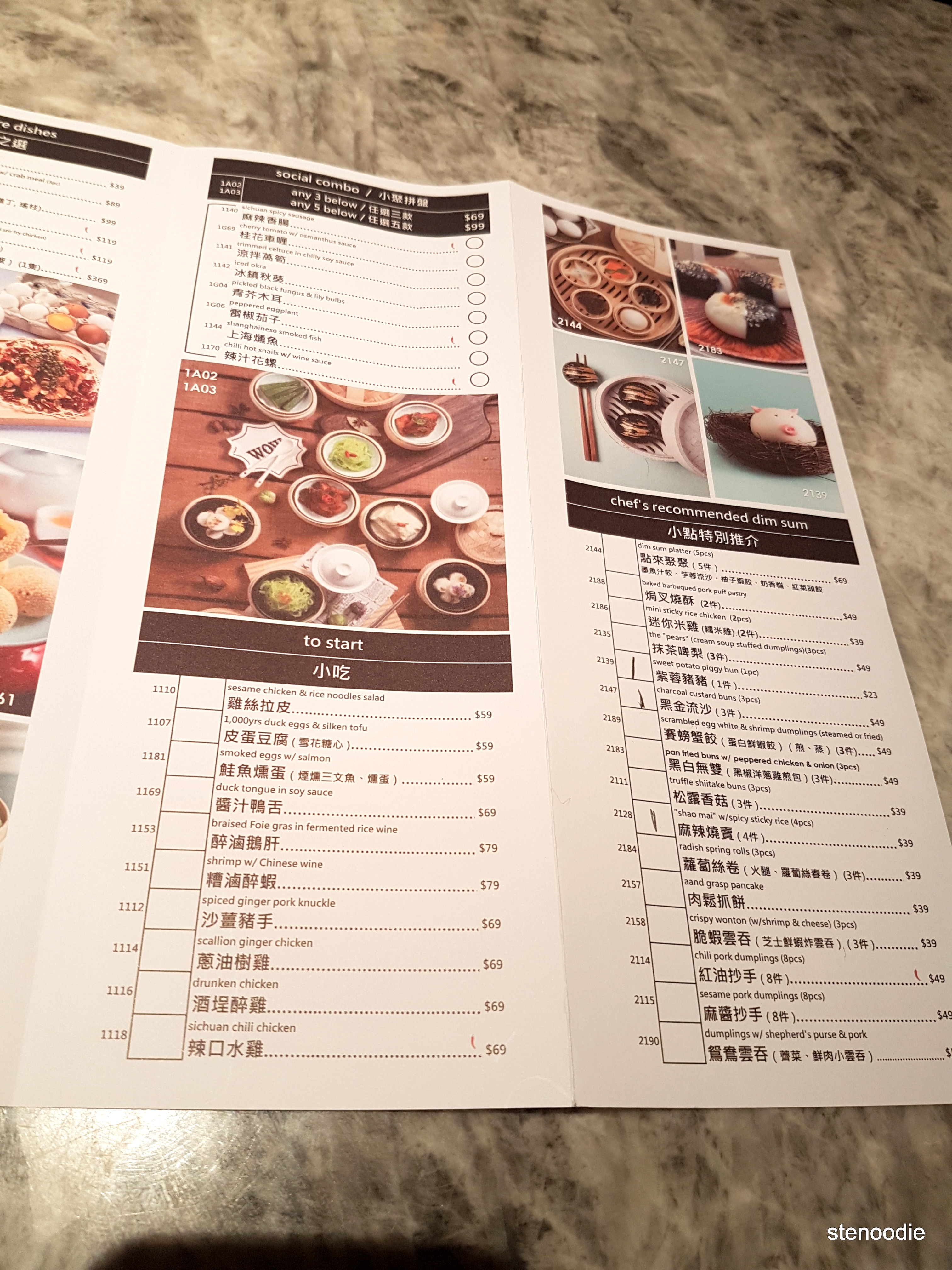 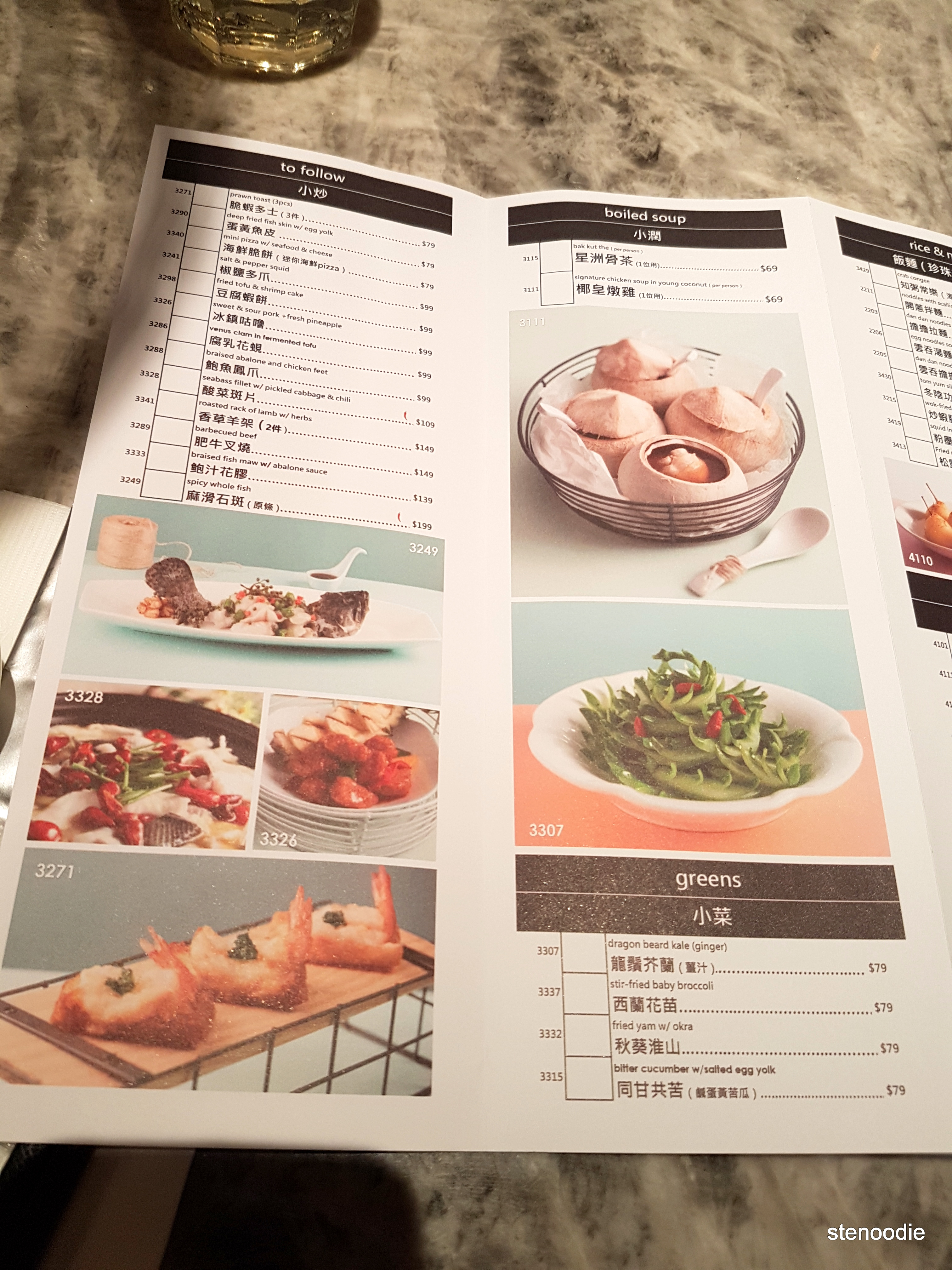 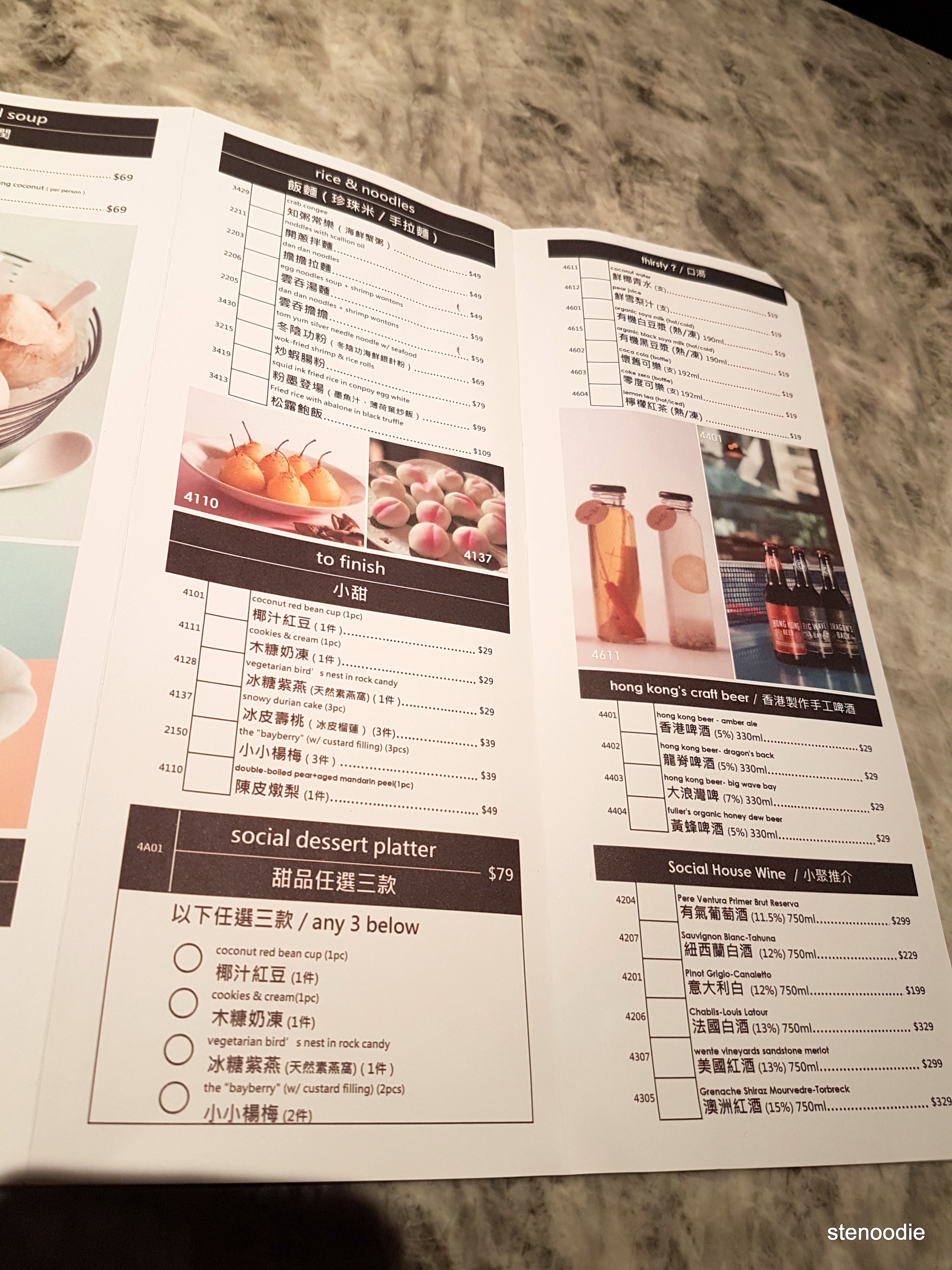 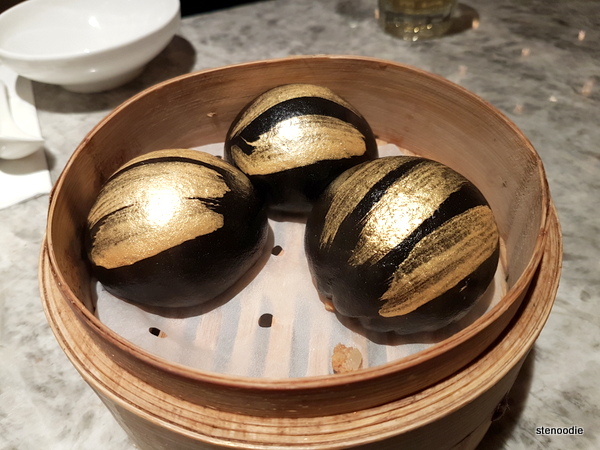 The first thing to arrive was the black and gold Charcoal Custard Buns (黑金流沙) “lau sa” buns.  I had seen something similar before online in photos.  This wasn’t just good looking but it actually tasted really good too!  The charcoal bun was ultra fluffy and soft while the inside was gooey with the lau sa melted.  It was such a soft bun!  (Charcoal doesn’t actually taste like anything.) 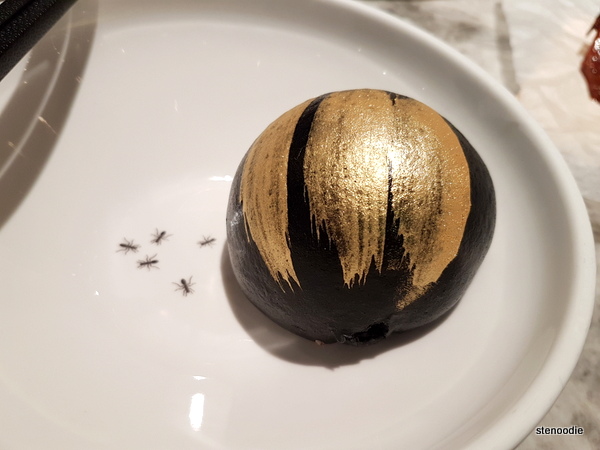 The ants going to try out this unique bun 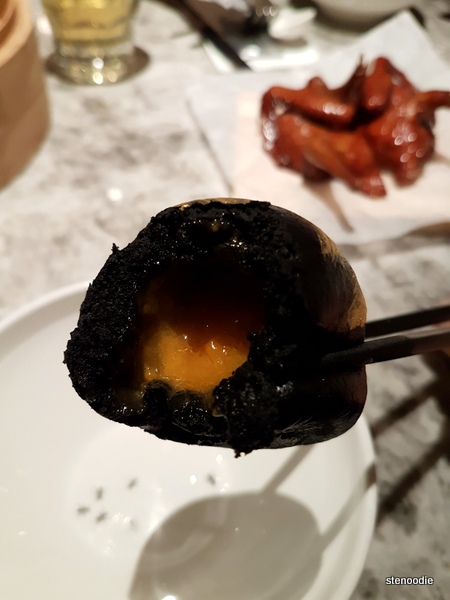 Yummy custard inside of the super soft bun 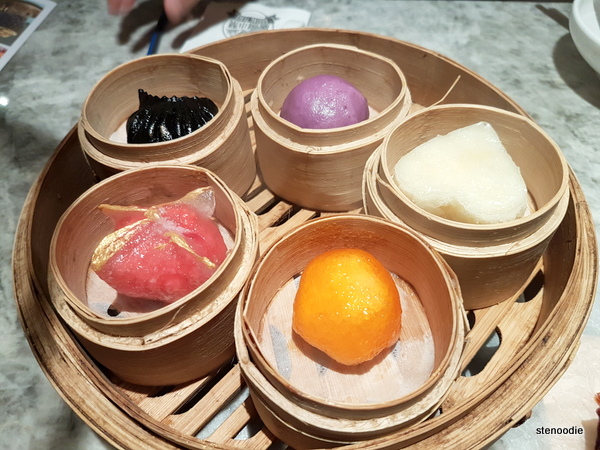 The second item was the Dim Sum Platter (點來聚聚) of five assorted buns and dumplings.  There was a white heart-shaped milk sponge cake (奶香糕), a purple taro lui sa bun (芋蓉流沙), a squid ink dumpling (墨魚汁鮫), a beet dumpling (紅菜頭餃), and pomelo shrimp dumpling (柚子蝦餃).  It was quite an assortment.  We ended up splitting the buns and dumplings in three each so that we could each get a taste.  The dumplings all had really nice gooey and soft skins. 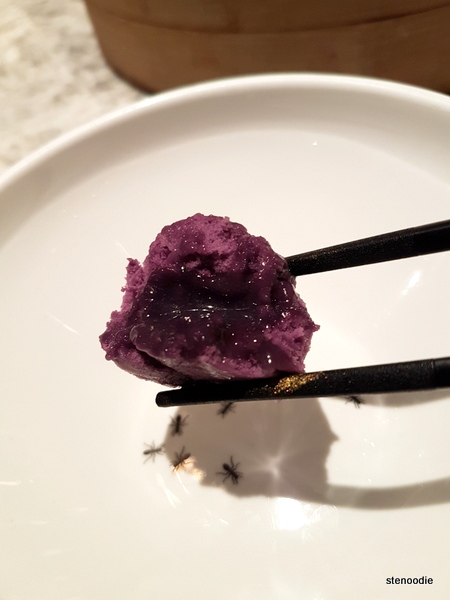 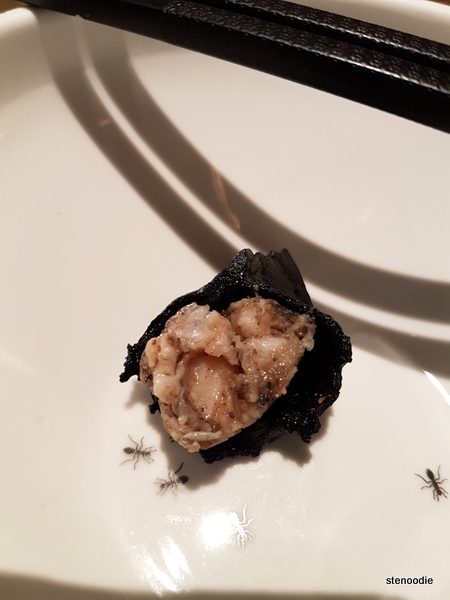 The $33 HKD Signature Roasted White King Pigeon (白玉王鴿) was small and didn’t contain much meat on its small frame.  It was a good deal for fried pigeon in general though, like the one we had at Yuen Long Bistro last week. 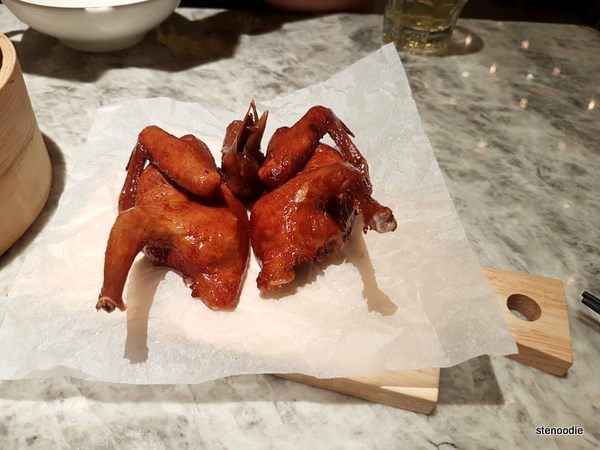 We ordered a Floral Rice in Lotus Leaf Wrap (荷花蒸飯 [鮮蝦, 火鴨, 雞丁, 瑤柱]), which tasted pretty good.  On the menu through, it said that there would be chicken chunks and shrimp and shredded duck, but there was more rice than these other ingredients. 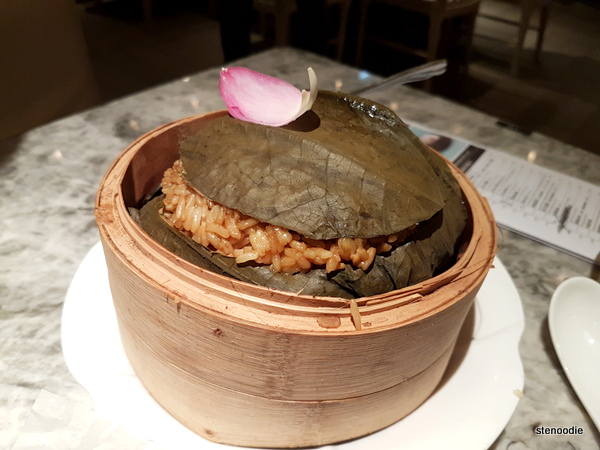 We thought that the pineapple item would arrive at the same time as the lotus rice so that we could eat both together (as the pineapple contained beef and pineapple chunks), but alas we had to follow up with the servers to get the dish on the table. 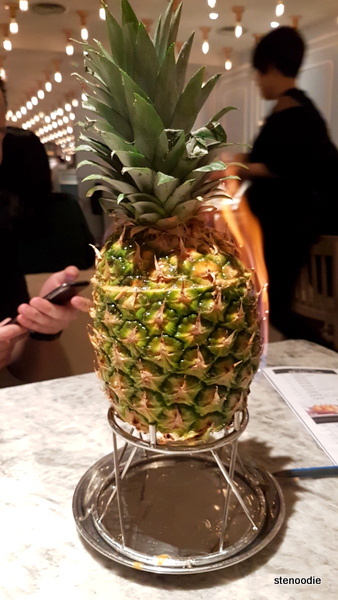 The pineapple lit on fire (“Flamin-ple” [火焰菠羅]) was indeed as cool as it looked.  Our flaming pineapple didn’t seem to have too much alcohol put on it though, so the burning didn’t last for very long.  Once it was done burning, a server came by to remove the top and then placed the pineapple in a ceramic dish.  Within the pineapple was cooked beef and pineapple chunks.  The beef pieces were a bit too big and difficult to chew through, but my tablemates enjoyed the sauce that it came with.

Like my cousin said though, this was more of a gimmick dish.  It was indeed very unique and nothing that I’ve seen or tried before though. 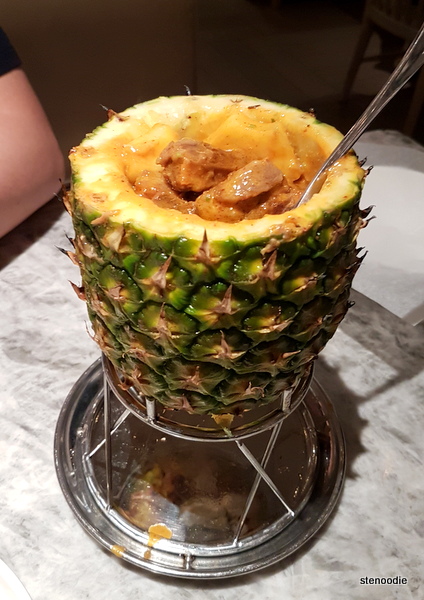 The pineapple top is opened to reveal the cooked food inside 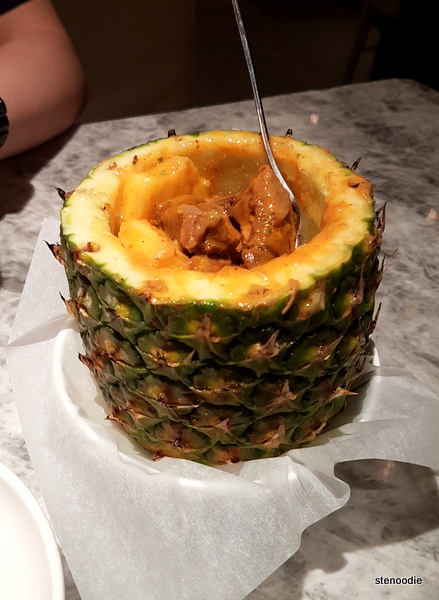 It was put on to a dish and served

The “black and white” Pan-fried Buns with Peppered Chicken & Onion (黑白無雙 [黑椒洋蔥雞煎包]) were super spicy inside!  They had a funky look, sort of like a yin and yang.  These tasted good. 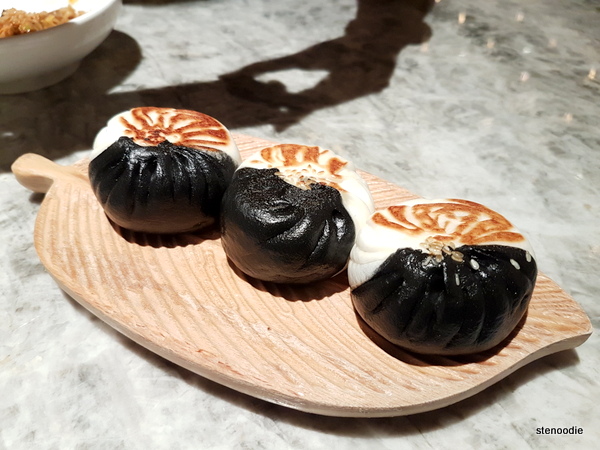 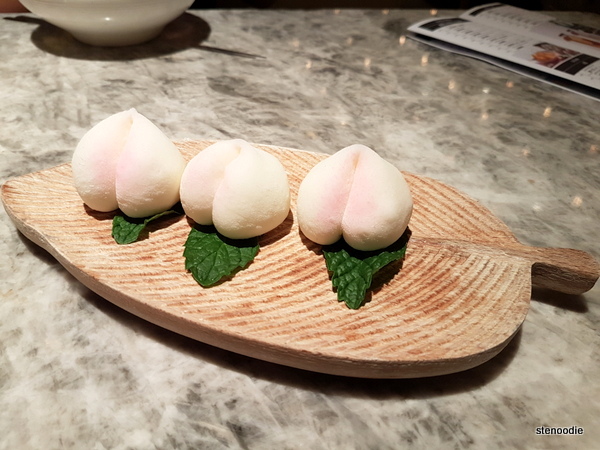 For dessert, we ordered the durian buns that looked like peach bums.  The insides of the Snowy Durian Cake (冰皮壽桃 [冰皮榴莲]) were so moist and gooey with white durian cream.  The skin of the bun was also elastic and thin like those cold mochi mooncakes.  They certainly make good buns here!  My tablemates said they would have preferred actual durian meat in the buns, however.

This was such a picture-worthy restaurant!  Thankfully, the tastes were remarkable.  It’s more important that the food tastes good in addition to the appearance and so it was nice to have the cute creative dishes tasting good in this case. 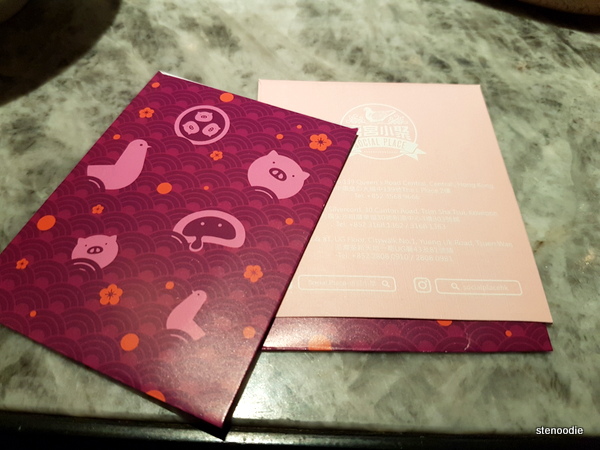