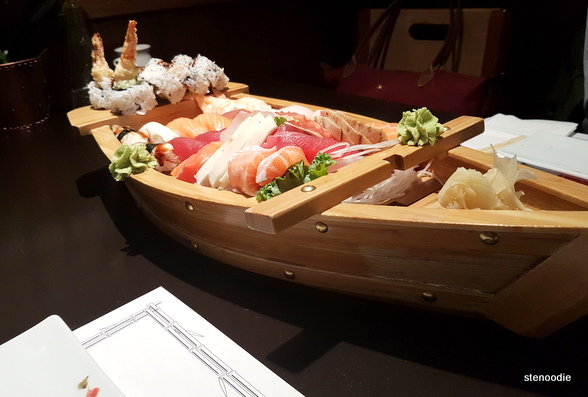 March 24, 2019:  After our Paint Nite event next door, we headed over to Hamaru Sushi at 4 p.m. for a really early dinner.  The online ratings for this small Japanese restaurant at a strip plaza next to a CIBC were very high and thus worth checking out to fix a sushi craving. 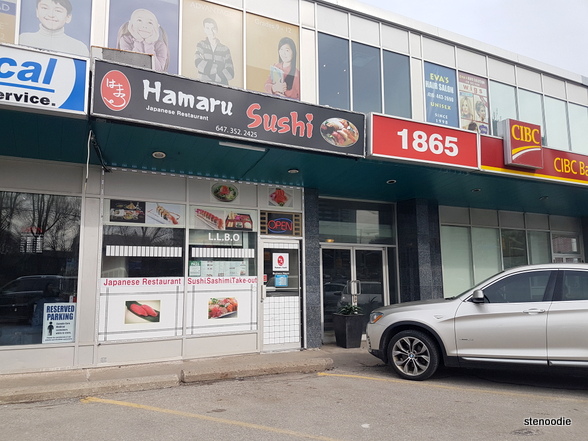 It’s located in a non-descript and old strip plaza

Not surprising as it was so early for dinner service (and late for lunch service), we were one of the only ones here when we walked into Hamaru Sushi.  We decided to order the small boat set which included 21 pieces of sashimi, 20 pieces of sushi, and 8 pieces of maki to share.  I love ordering sushi boats because there’s so much variety and the presentation is always pretty! 😀 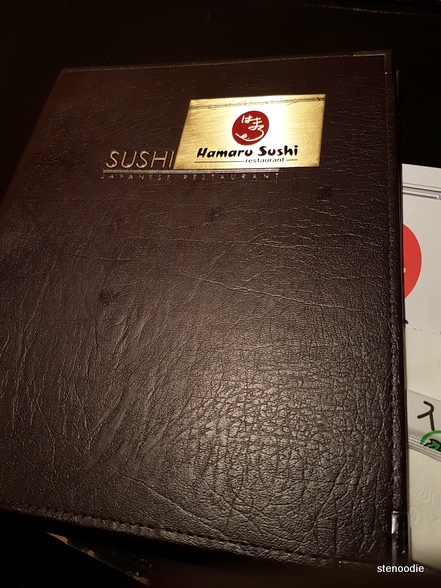 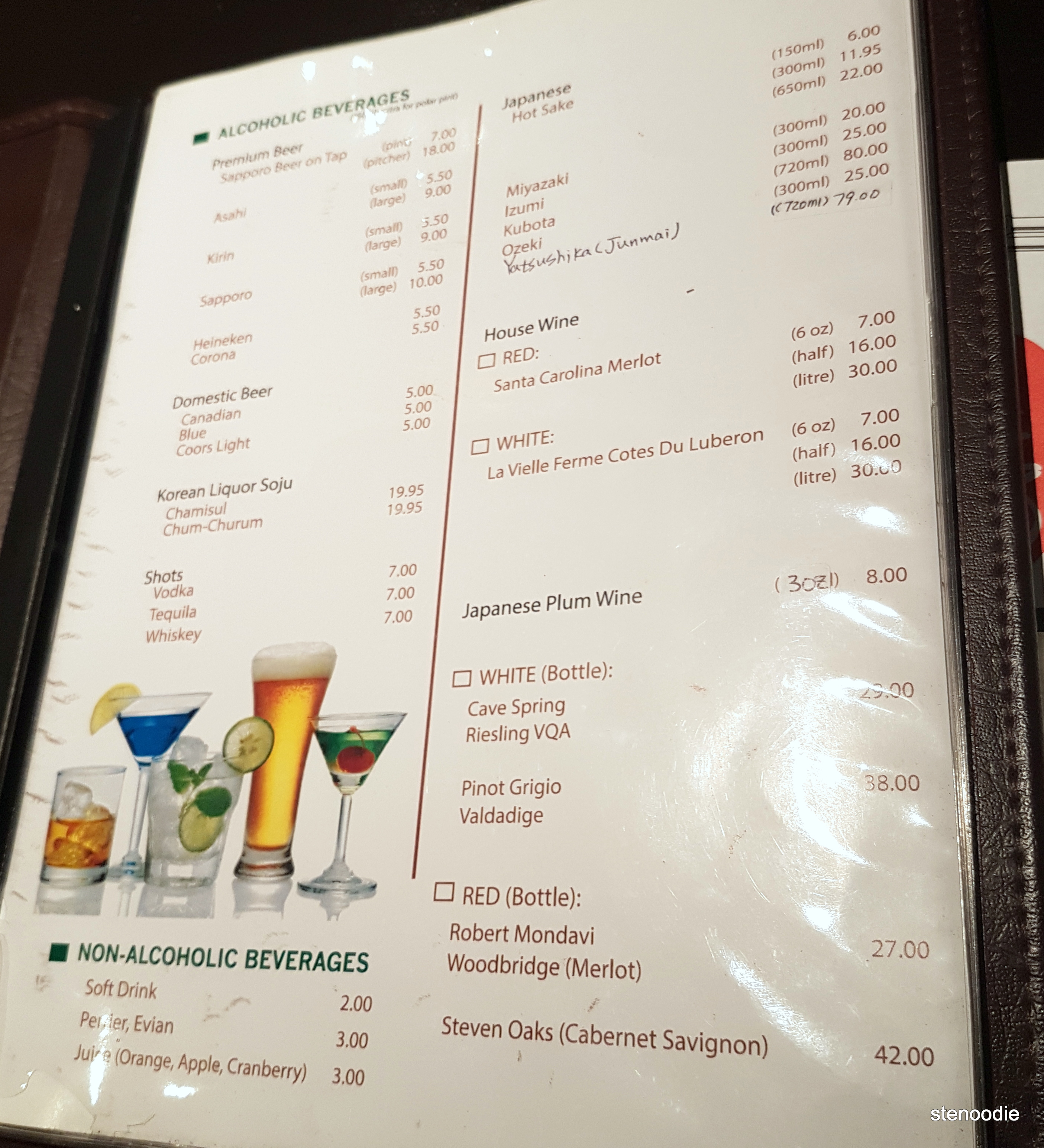 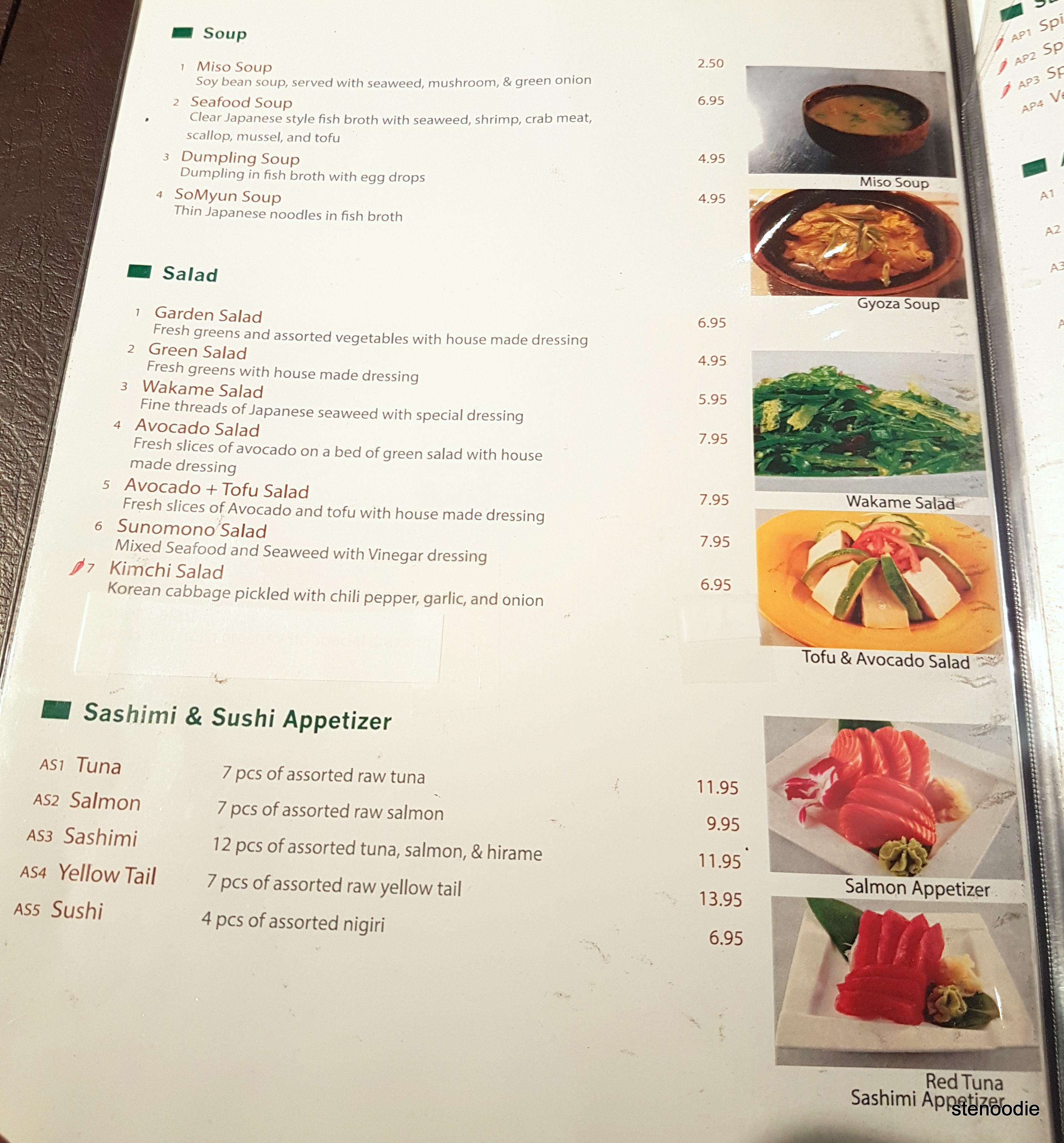 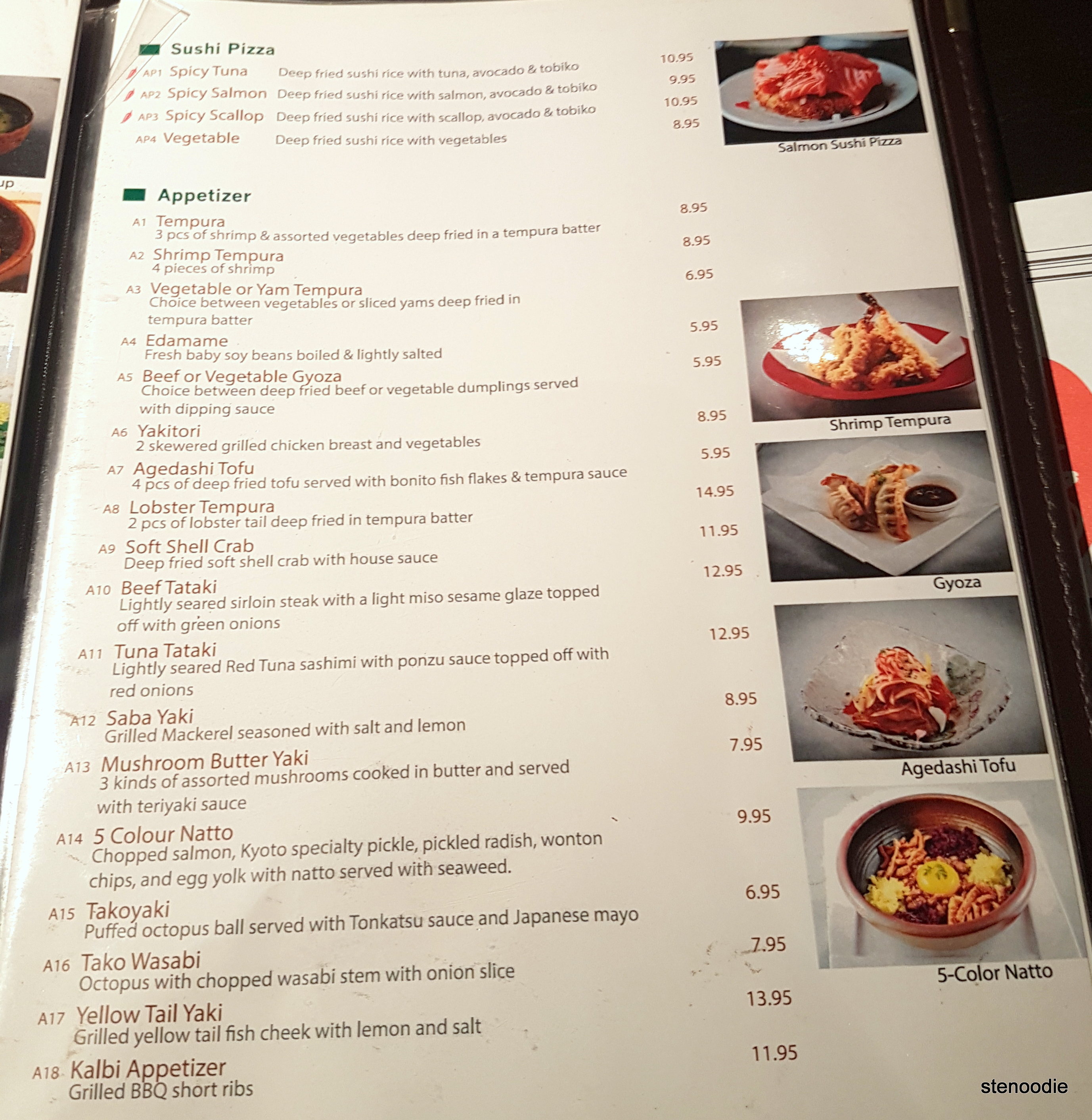 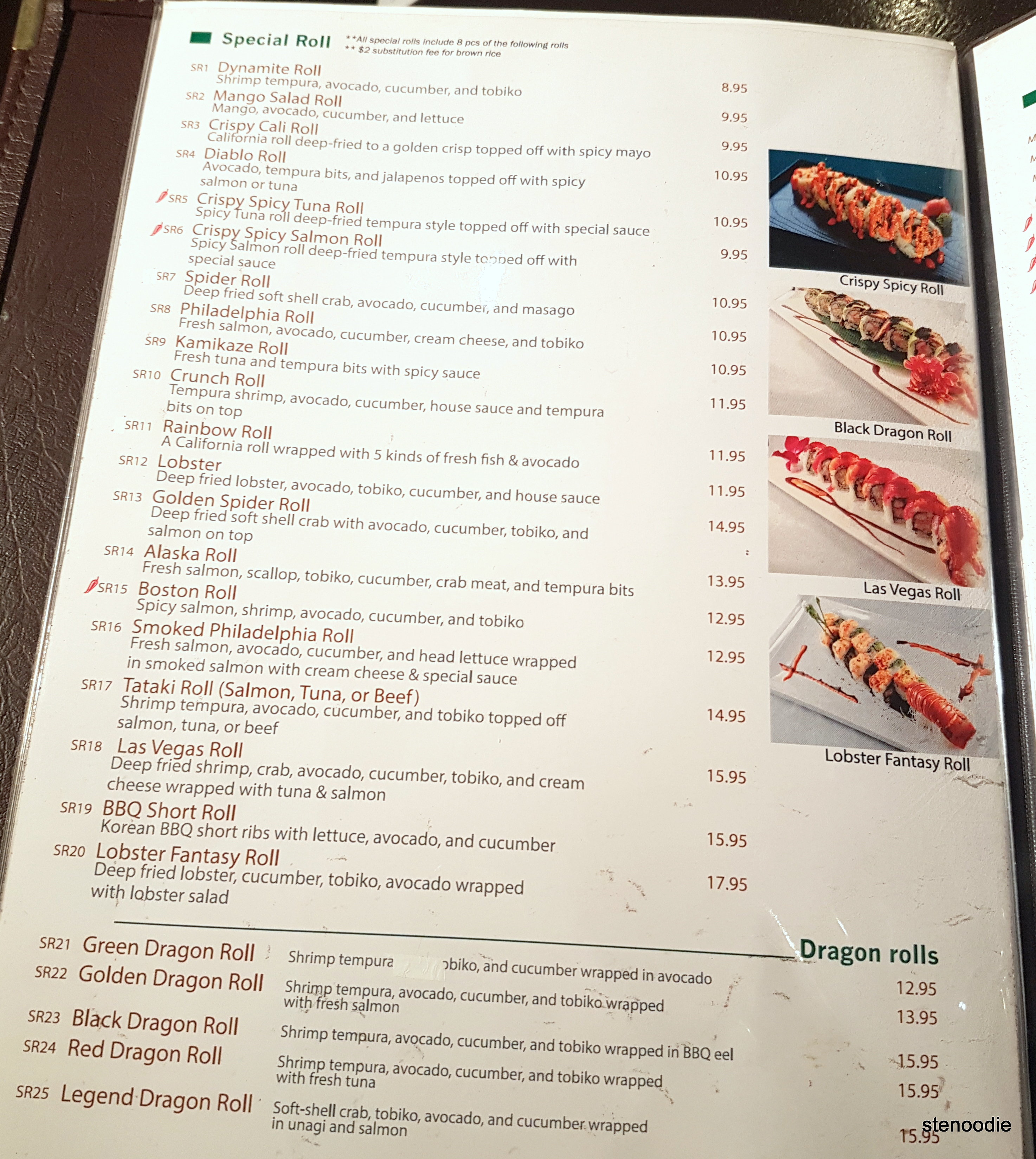 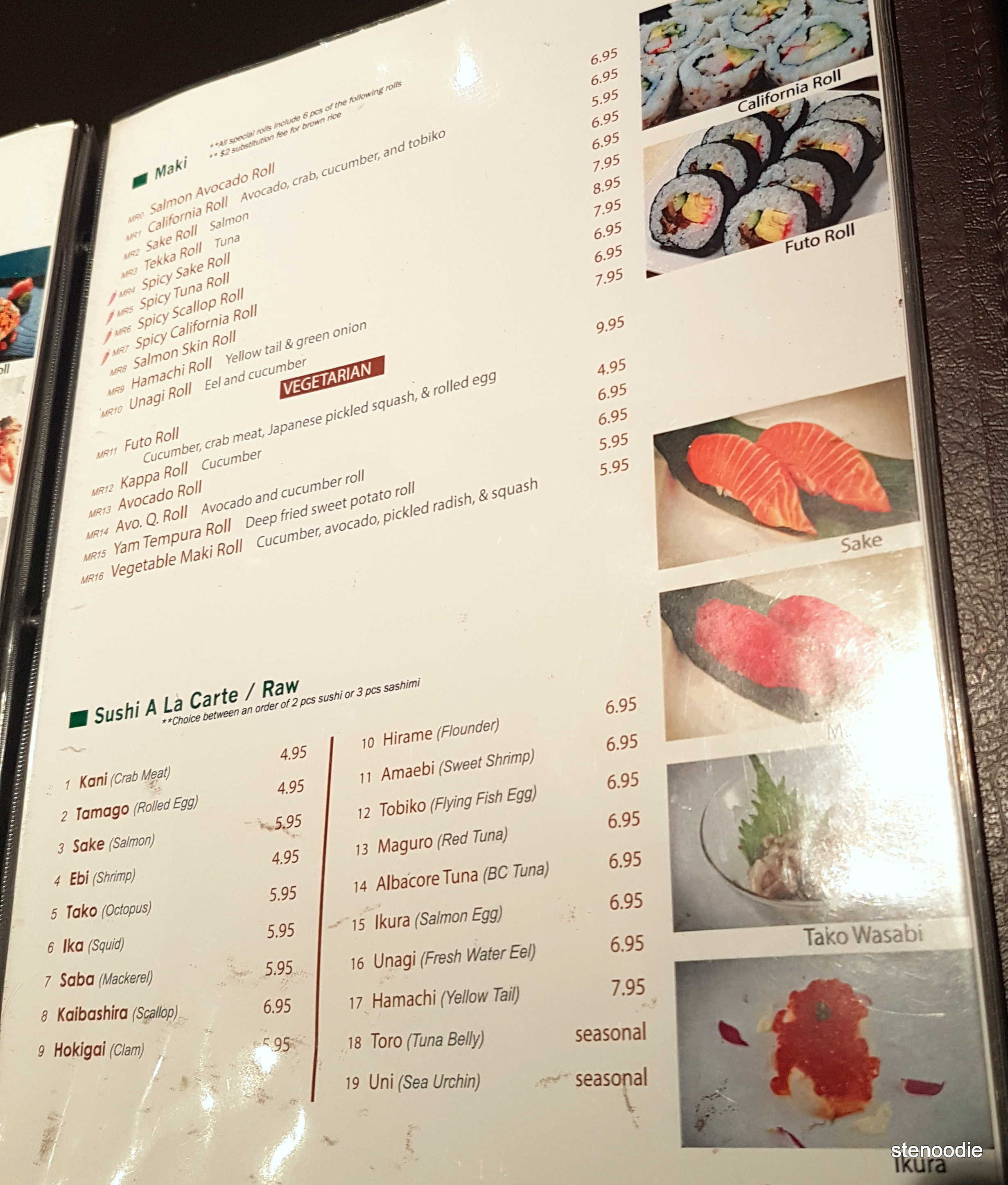 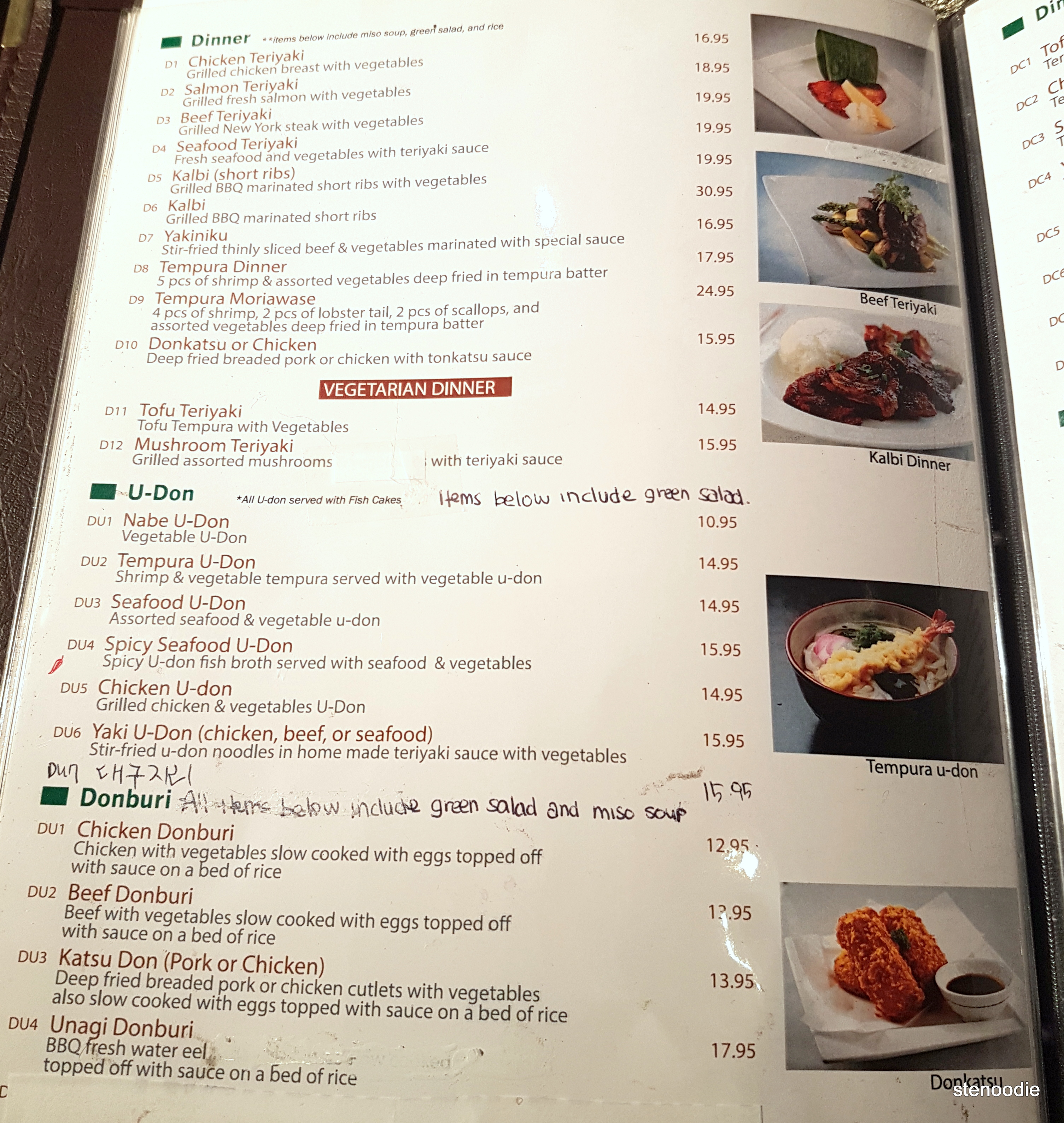 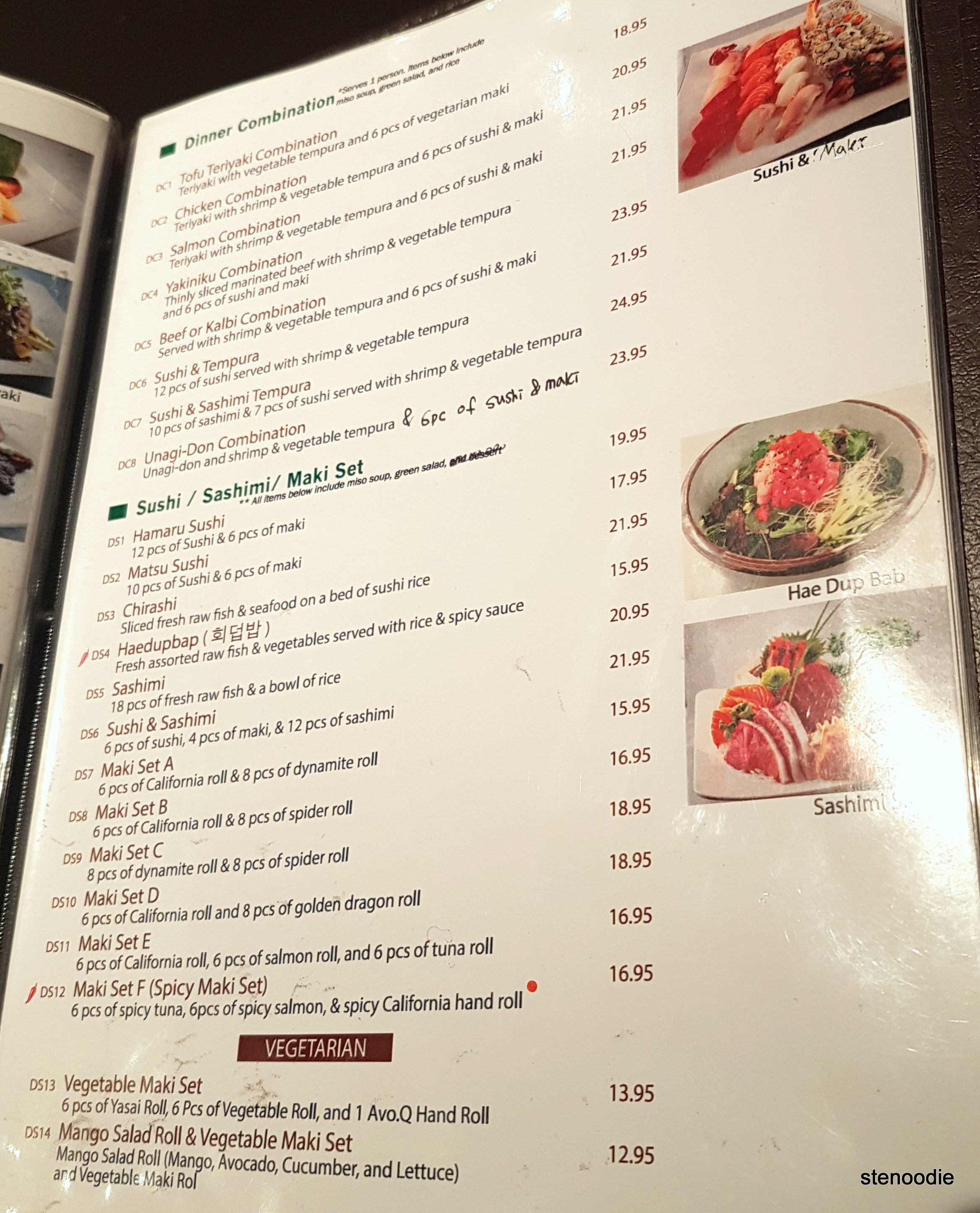 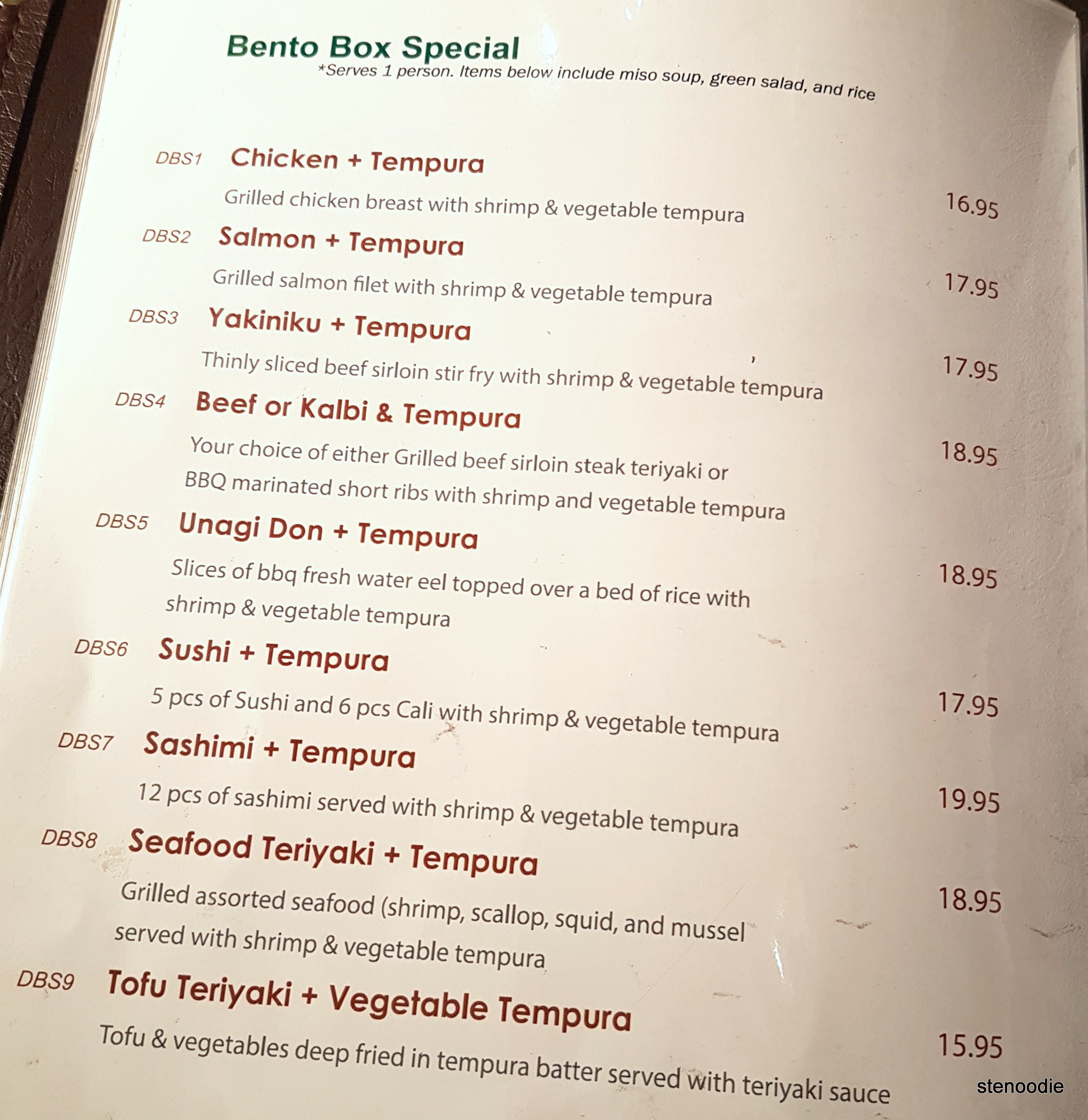 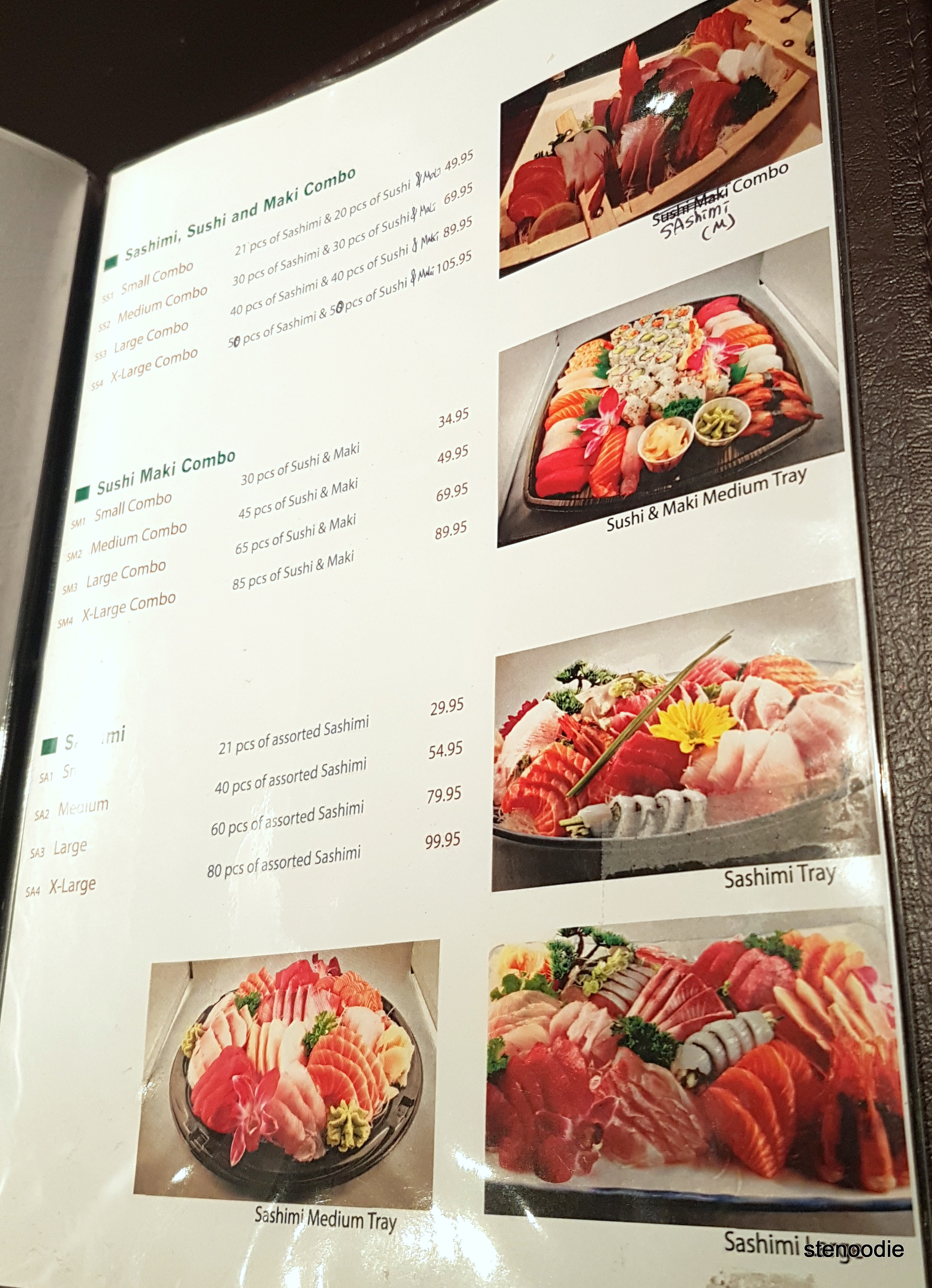 First, we were served a small complimentary bowl of soup noodles (I believe it’s called “SoMyun Soup“).  I always enjoy these “noodle crunch soup” where the noodles are thin, the soup is umami, and there’s little pieces of floating tempura bits which are soggy yet crunchy.  There are many other restaurants that also serve this exact noodle soup appetizer complimentarily before the meal. 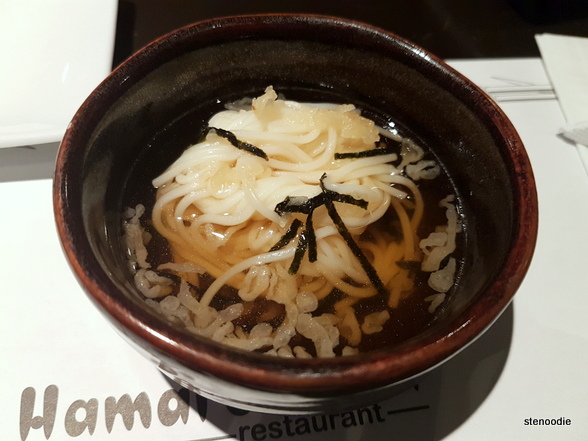 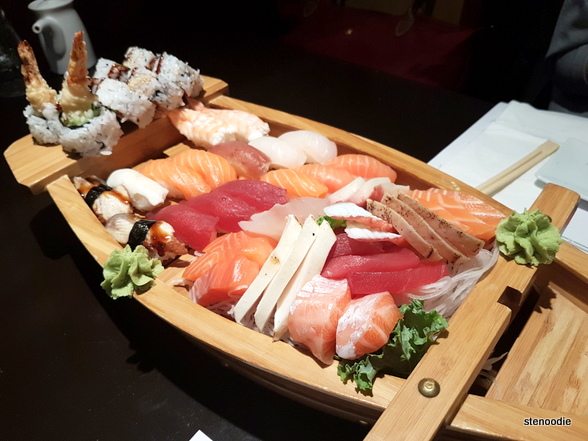 Not long after ordering, our small Sashimi Sushi and Maki Boat arrived!  It was beautiful! 😀  There were various pieces of sashimi, sushi, and the maki roll was a Dynamite Roll.  Yummy!

The cuts of salmon sashimi were nice and thick — exactly the way I like them.

It’s best to eat all the items sooner rather than later because the longer they sit in the boat and warm up to room temperature, the items don’t taste half as good as when they’re freshly brought out.

The wasabi here wasn’t too spicy and melted too easily into the soy sauce.  We were stuffed by the end but we ended up finishing the entire boat of fish and rice (49 items in total!). 😀 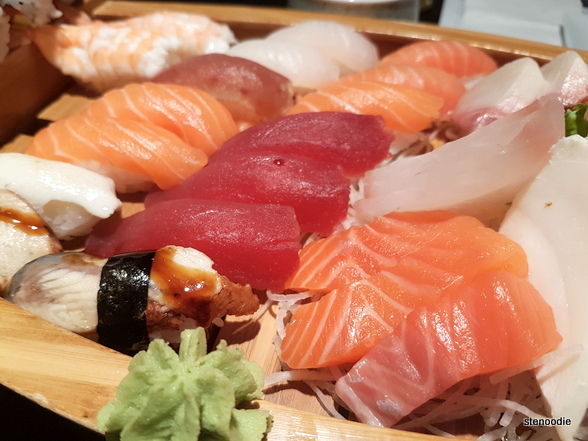 At the end, we were given complimentary ice cream as well!  There was a choice between vanilla or green tea ice cream.  I chose the former while my friend chose the latter. 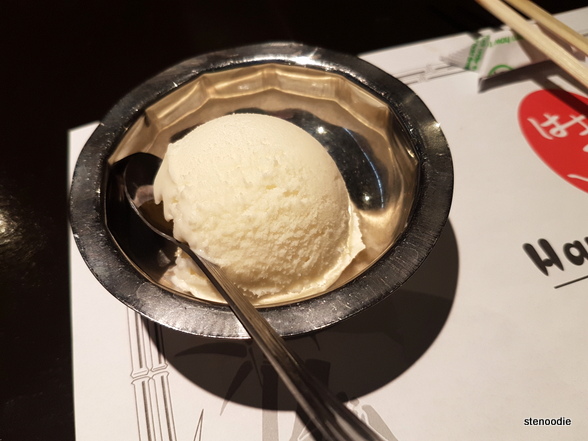 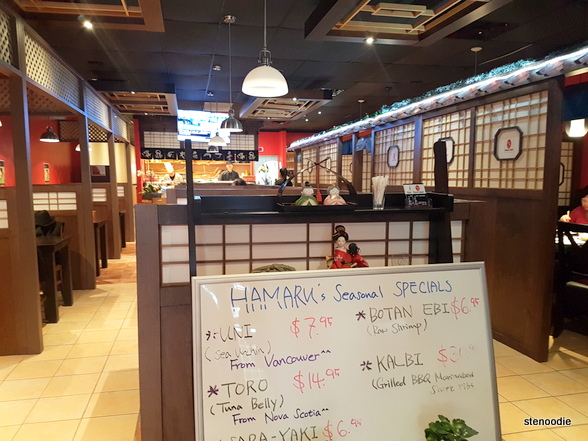 It’s so pretty inside!

This was a really great and solid Japanese restaurant for sushi and sashimi! 🙂

The decor of Hamaru Sushi was also nice.  It reminded me immediately of Osaka Sushi Japanese Restaurant in Markham where they also have tables in the middle of the restaurant with private rooms on both sides of the restaurant.  I wonder if the two restaurants are related in any way.