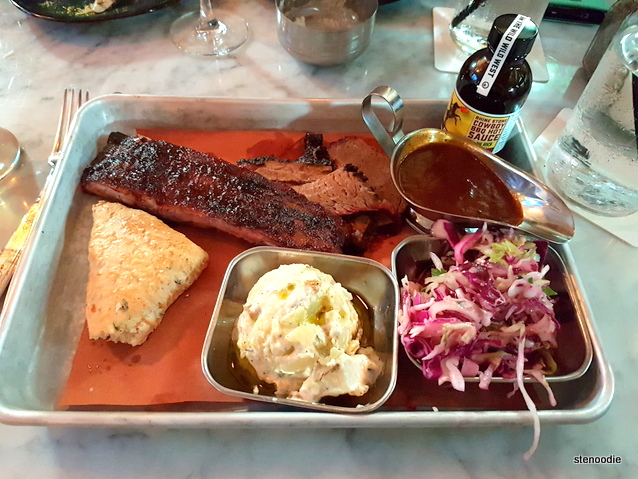 The only Summerlicious restaurant I participated in this year was Liberty Commons at Big Rock Brewery.  This was such a uncommon practice for me; I used to attend the licious restaurants religiously and would go to more than one restaurant in a season.  This year, I didn’t actively plan any Summerlicious events because I had been going out so often already for tastings and other meals.  Also, not all licious restaurants actually live up to the event — there are a handful of times where I’d rather visit the restaurant as a standalone to see how their usual meals fare than the prix fixe meals. 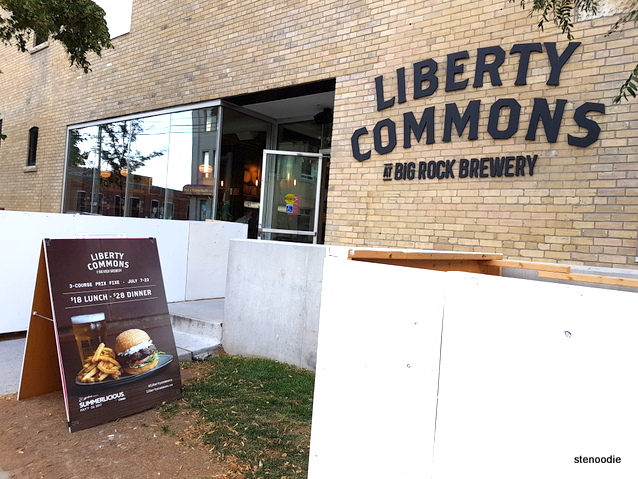 The entrance to Liberty Commons. It looks like they are renovating it

Daphne made a reservation for us there at 6:30 p.m.  They have a large patio for those beautiful summer days but unfortunately on the day we were there, it was really humid and muggy outside.  We sat inside at the lower common area.  Daphne arrived before I did. 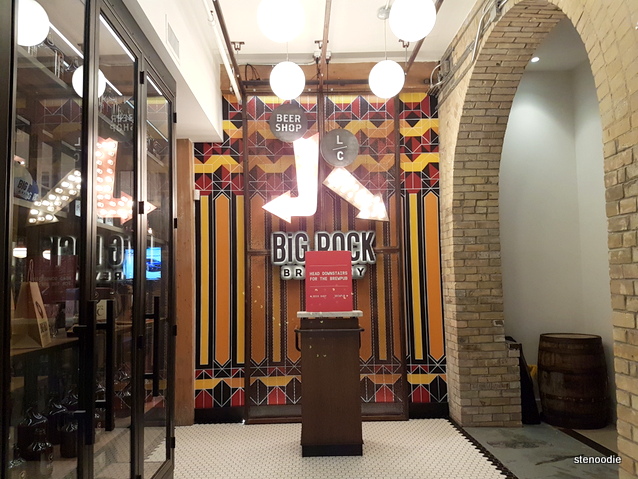 The lobby. Go down the stairs to your right to go to the dining area (there is an elevator for those in need of one) 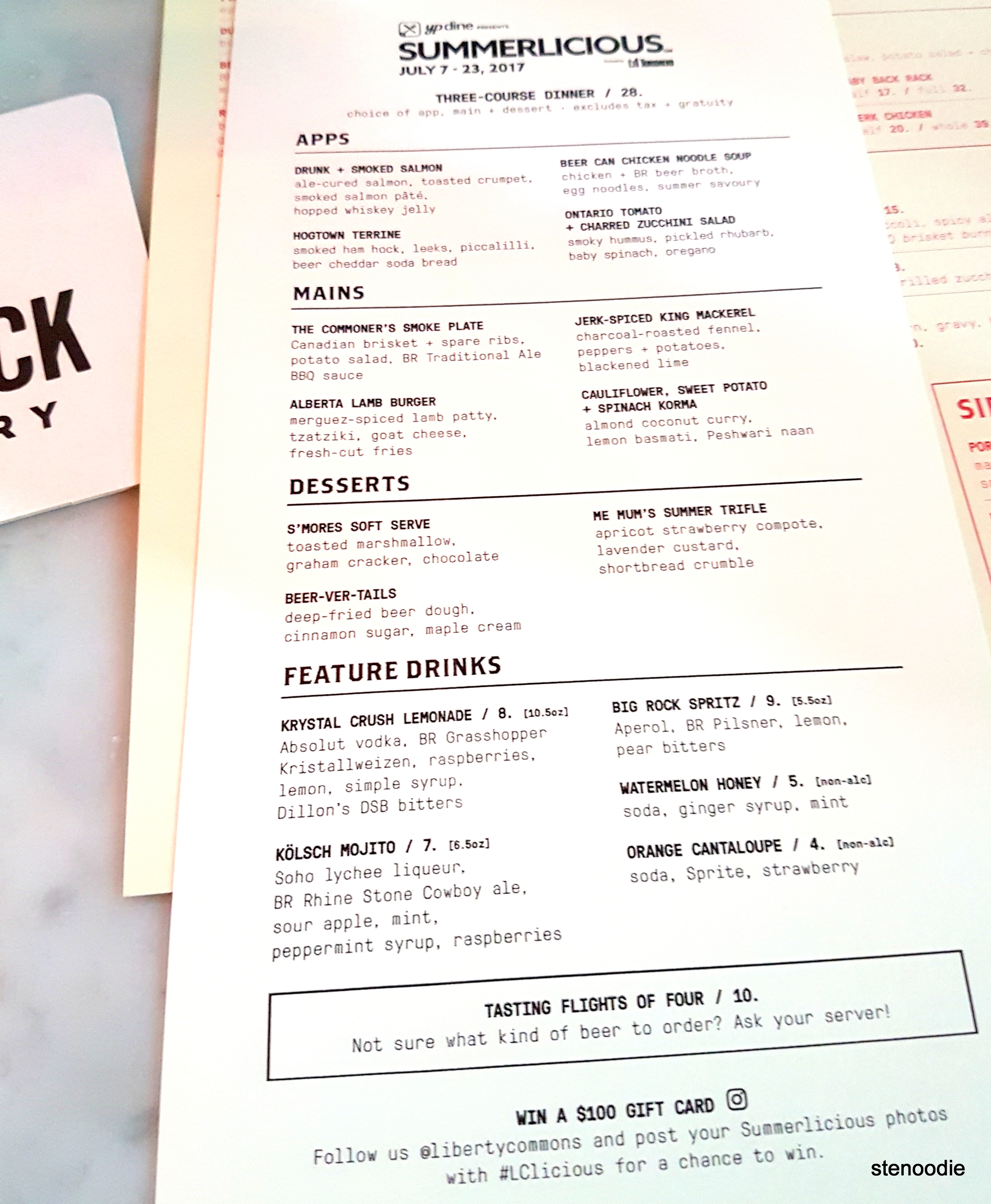 When Daphne got seated, the server informed her that she would get her some water.  However, even when I got there a couple of minutes later, the water hadn’t even arrived yet — what was taking so long?  We had to flag down another server to request for water as well as inform him that we were ready to order.  The male server apologized for the wait and took our orders right away.  However, when we wanted to take orders for our drinks as well, he informed us that our original server would be with us shortly to do that. 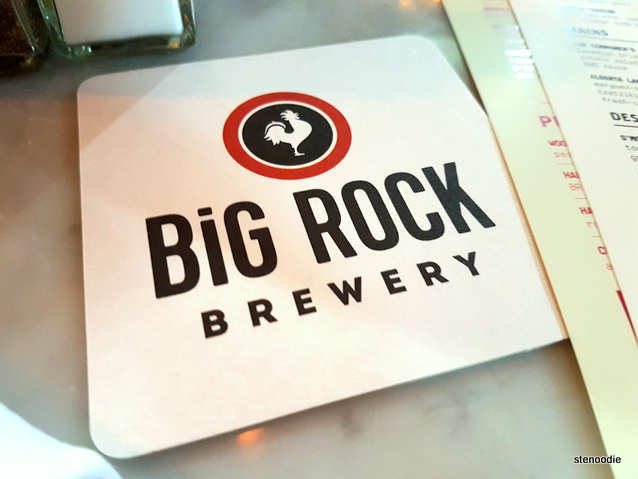 The downstairs area of Liberty Commons was a little stuffy and since we were near the farther side of the main restaurant area, it was more difficult to wave down our server when we needed to. 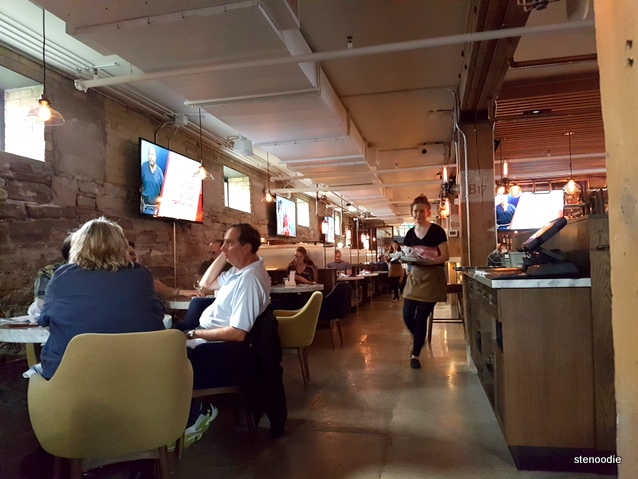 Our view of the restaurant from our table 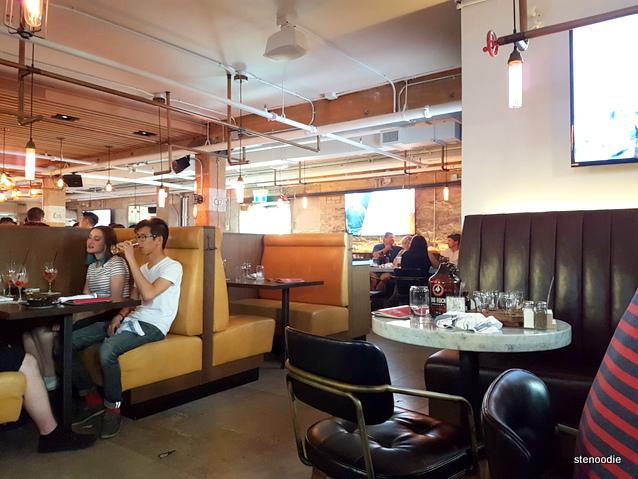 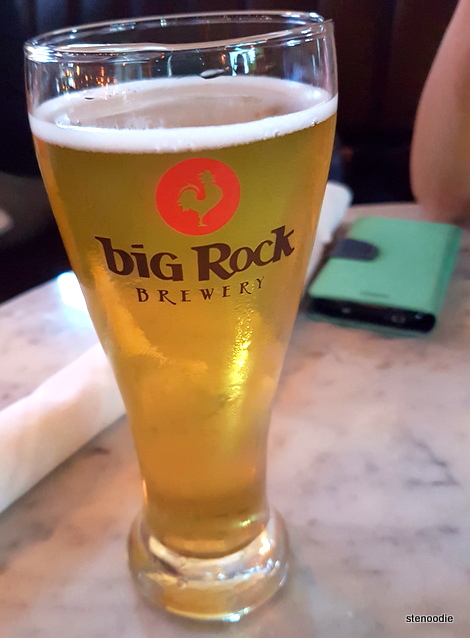 Daphne ordered The Uncommon Sangria (funny that mine was a “common” lager and hers was an “uncommon” one XD).  It had pear cider, calvados, white cranberry, and ginger.  It looked so pretty and tasted sweet and yummy too. 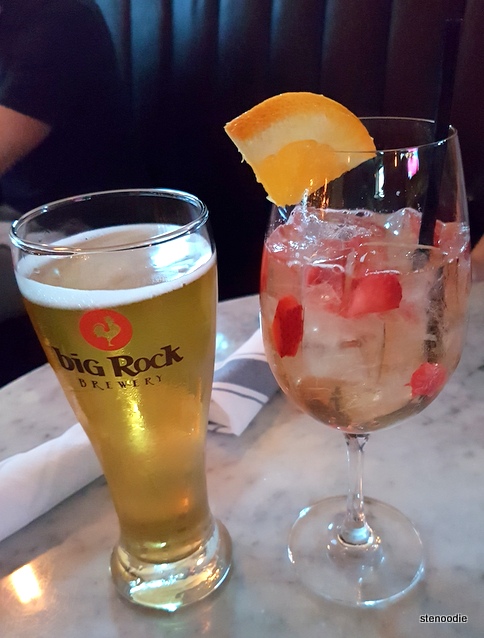 We decided to share our Summerlicious options between the both of us which was an amazing idea because we could both try more of the food! 😀 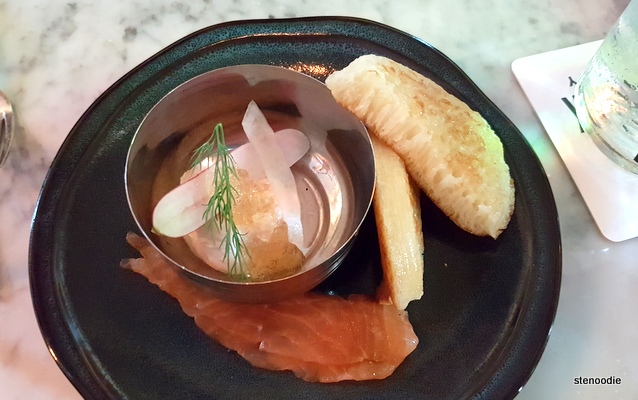 The appetizer that Daphne ordered was the “Drunk + Smoked Salmon” which consisted of ale-cured salmon, toasted crumpet, smoked salmon pâté, and hopped whiskey jelly.  It was a really small portion (both appetizers were).  It was in essence just the ingredients put together on a plate.  I can understand that it must be have been difficult for a pub to serve food in a “licious” theme (usually licious restaurants are the more higher-end types).

I REALLY enjoyed the taste of the smoked salmon pâté.  The hopped whiskey jelly was good too.  I thought that there could have been more of the ale-cured salmon; there were only two small and thin slices of it. 😦 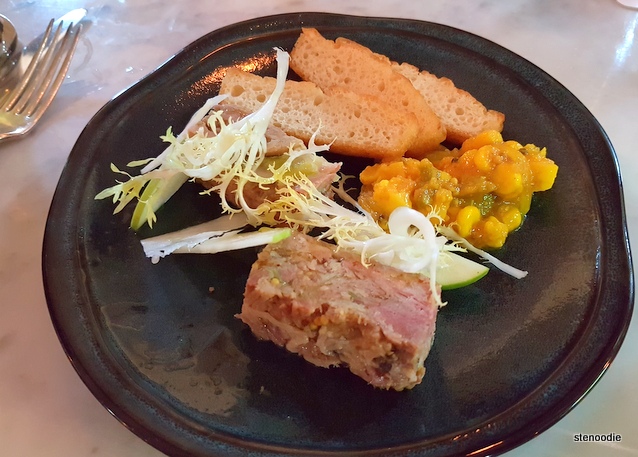 Our dishes were cleared before our mains arrived next.  Daphne ordered the Alberta Lamb Burger.  This burger had a merguez-spiced lamb patty with tzatziki, goat cheese, and were served with fresh-cut fries.  This was a huge portion!  The lamb burger was really good.  Like Daphne said, it was very gamey and it was overall a tasty burger. 🙂  There was a lot of goat cheese in it too.  The fresh-cut fries were good. 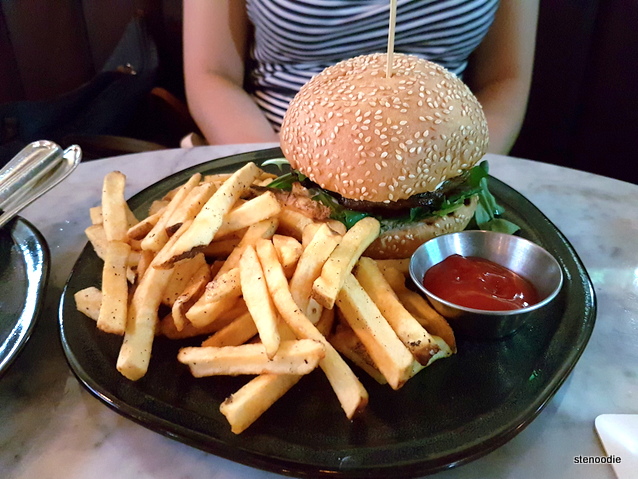 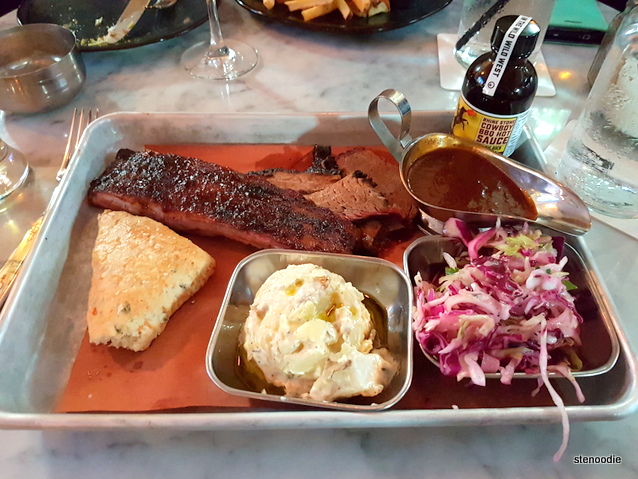 I ordered the Commoner’s Smoke Plate.  This was an assortment of their main meats and sides on a metal tray.  This included Canadian brisket, spareribs, and potato salad (and cheese scone and some coleslaw).  There was also a BR Traditional Ale BBQ sauce.  This was neat because in addition to the container of sauce, there was a full mini bottle of “Rhine stone Cowboy BBQ Hot Sauce” that was a souvenir to take home.

I loved the assortment of goods on my table.  I love variety. 😀   I really liked the spareribs.  I thought they were so tender and practically fell off the bone.  However, after a few bites, they tasted more salty than we would have liked.  The Canadian brisket appeared like it was dry and indeed, it tasted dry. 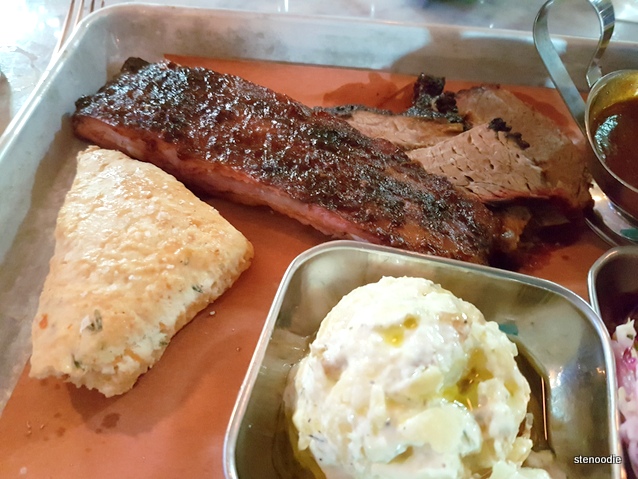 I liked the tender spareribs!

I liked the potato salad, coleslaw, and the cheese scone. 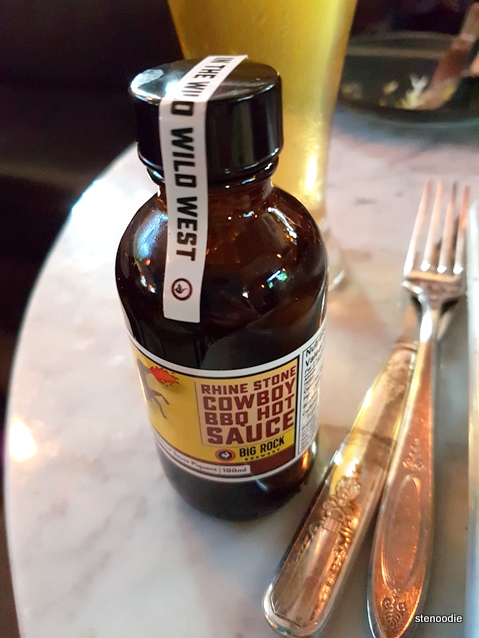 Free for us to take home!

In the end, this was a lot of food and I wasn’t able to finish most of the contents on the Commoner’s Smoke Plate.  I asked for a takeout box to take it home (I liked that their takeout containers were plastic lined paper boxes and that they didn’t use Styrofoam boxes — go Mother Earth!)

Our final course was dessert!  We were very much both looking forward to this because the dessert options sounded so unique and appetizing! 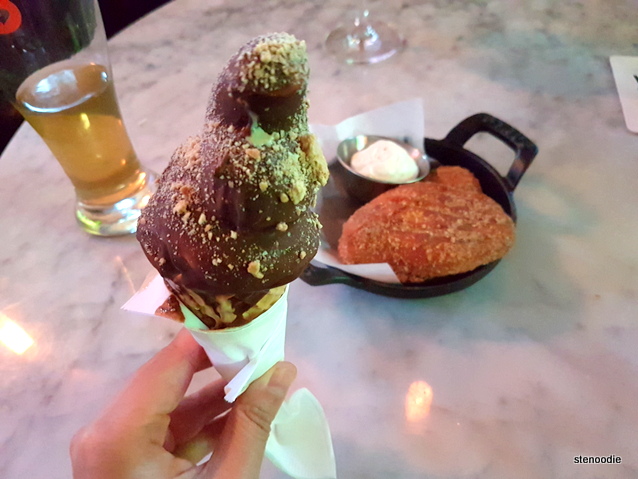 Daphne ordered the S’mores Soft Serve.  To both of our surprises, this appeared not as a dessert in a dish but actually as a soft serve cone!  This included toasted marshmallow, graham cracker, and chocolate.

After a few photos, we had to eat this quickly because it was immediately melting.  We asked our server for a plate and spoons so that we could share this properly.  In the end, because I liked this dessert more than Daphne, I took the cone over and finished it.  I really enjoyed it!  The chocolate bits on top of the toasted marshmallow ice cream was delicious for my chocolate-loving taste buds.  The graham cracker wasn’t very obvious though. 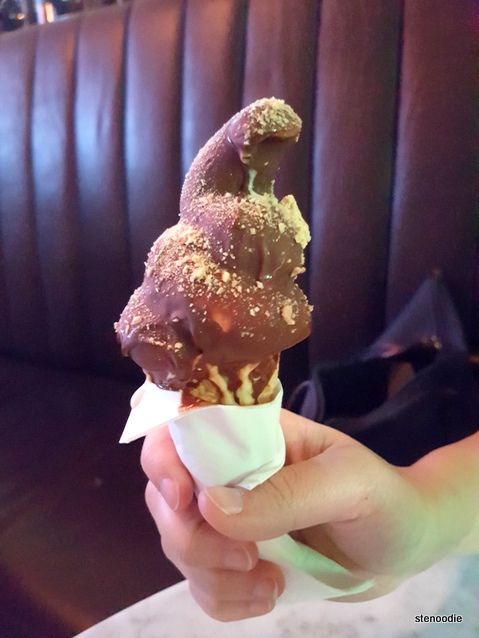 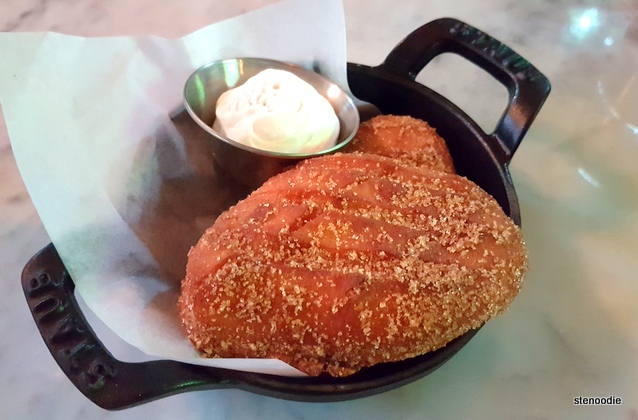 The dessert that I ordered was the Beer-ver-tails (again, so creative; right?  It is a take on the Canadian dessert, BeaverTails, and beer in case it wasn’t obvious).  This was two pieces of deep-fried beer dough with cinnamon sugar dusted on it and a container of maple cream on the side.  Wow, the maple cream was delicious!!  I thought this maple cream made the deep-fried beer dough stand out.  I wasn’t a big fan of the main component, the beer though.  Daphne loved it though and that’s why we switched desserts. 😀

Overall, this was a pretty good meal at Liberty Commons.  It was a nice overview to taste the items that they offer here.  It wasn’t anything too fancy though and I’m not sure if I would run back for another meal here.  However, when I was flipping through their regular menu, they have some really great deals on food and drinks (and a brunch menu too)! 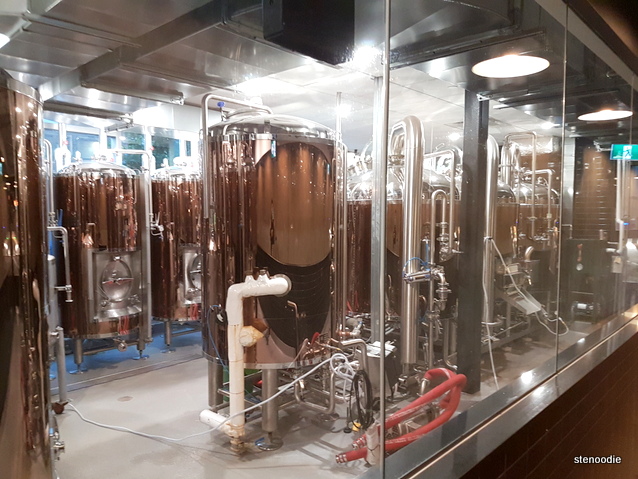 They have an onsite brewery!