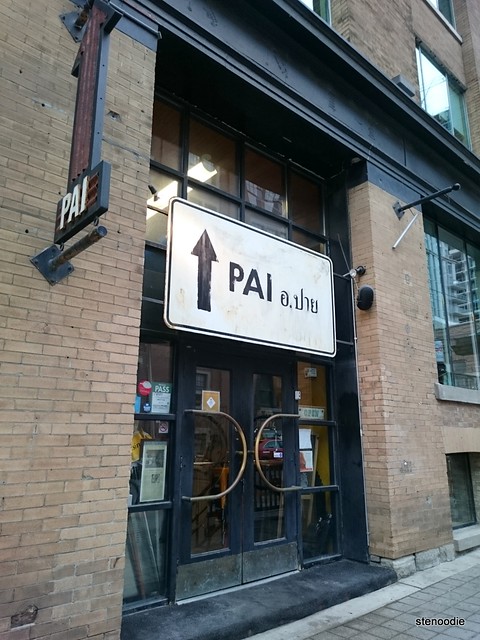 Located on 18 Duncan Street in Toronto

Joyce and I finally had a catch-up dinner at Pai Northern Thai Kitchen.  This restaurant has been on top of the almost-extinct Urbanspoon top restaurant list for a while now so I definitely had my eye on it.  It is located on Duncan Street off of King Street West in the Entertainment/Theatre District in downtown Toronto.

Its exterior has an interesting yet simple facade.  After you open the doors, you head down a flight of stairs to where the dining room is.  It’s a little dark in there and some of the tables are close to another so don’t expect total privacy if you are dining for two.

With the flags on a line, it reminds me of a party atmosphere

The service here was efficient and fast and the food arrived timely; so much so that our mains arrived before I even finished my appetizer.

Joyce has been here for lunch many times since her workplace is close by.  I was excited to see what this place was all about!  I wanted to compare it to other popular Thai restaurants like Khao San Road and Sukhothai. 🙂 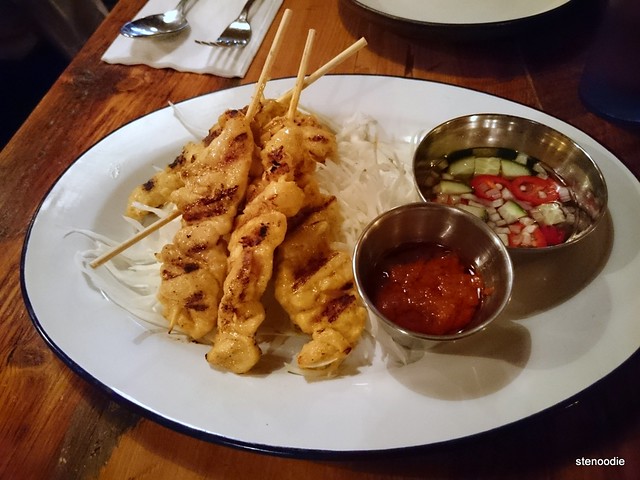 I ordered the Gai Satay since I was in the mood for some saucy chicken skewers!  It is grilled curry marinated chicken on a skewer with peanut sauce on the side.  There was also another dip that contained chopped green and red peppers and tasted a little sour but light.  There were five chicken skewers and I couldn’t believe how incredibly soft the meat was.  It was very smooth!  However, I found that the chicken by itself was a little bland and relied heavily on the peanut sauce and dipping sauce to taste good.  The peanut sauce was very good though and chunky!  I would recommend this appetizer because of how soft the chicken skewers were.  Yum! 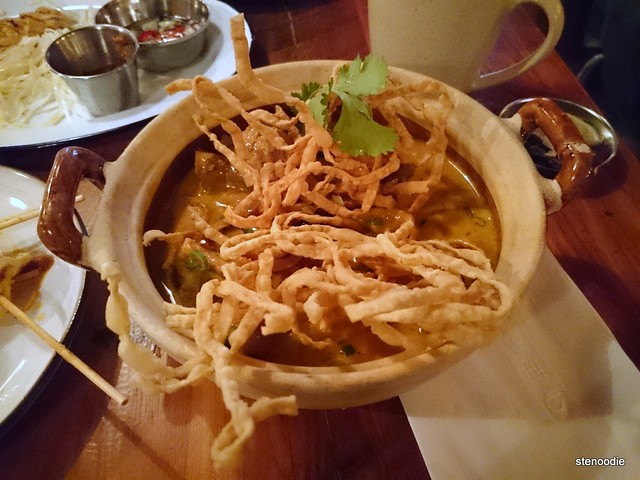 I ordered the Khao Soi after remembering how much I admired it at Khao San Road.  Khao Soi contains fresh egg noodles in golden curry topped with crispy noodles, coriander, green onions, and a choice of braised beef, chicken breast, or chicken drumsticks.  I chose the braised beef. 🙂

It arrived in a fashion similar to the one at Khao San Road.  The crispy yellow noodles were sticking out of the bowl like a mad man’s hair.  It was picture worthy.  Underneath the crispy noodles, there were also flat noodles that were soft and soaked up the golden curry sauce.  The curry sauce was smooth and smelled great. The chunks of braised beef were pretty good; not too rough but not entirely tender either.  The entire bowl was rather good!  However, I think I like the one at Khao San Road better simply because there were more noodles and meat and that the curry was very, very smooth and even stronger in flavour than this one.  Also, since the spice level can be customized, I chose the Medium spice level. 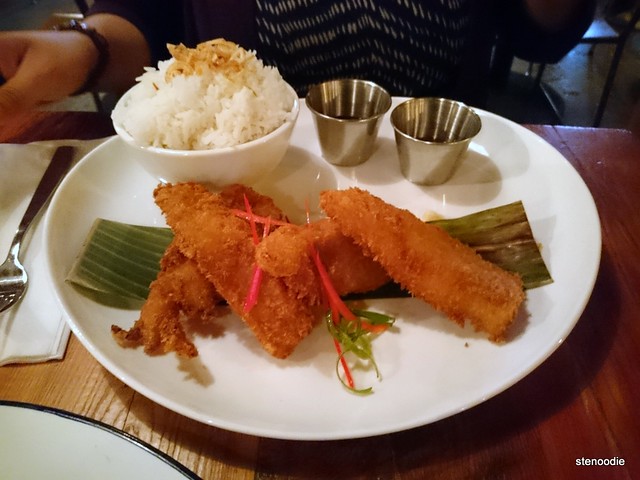 Joyce chose the Khao Pla Tawt which is a crispy basa fillet that is served with jasmine rice.  I tried a little bit of the fried fish and I was very impressed with how soft and tender the fillet was!  Joyce liked her dish. 🙂

My Khao Soi and the chicken skewers filled me up definitely so I ended up taking the rest of my Khao Soi home.  They gave me a nice tight-sealed container to bring the noodles and curry home.  It was great. 🙂 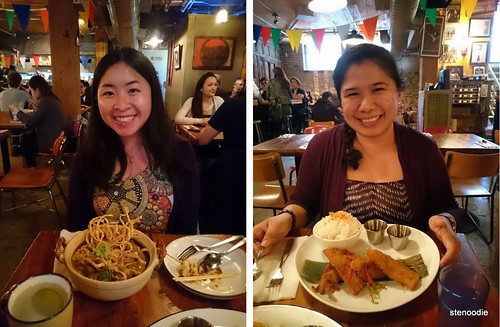 There were a lot of patrons here as the night carried on from 5:30 to 7 p.m. and the tables were all full.  If you want a spot here, it’s best to make a reservation if you have more than two people.  I’m happy that I have tried Pai Northern Thai Kitchen now!