The Captain’s Boil’s New Lobster Rolls and Bisque on a Ship! 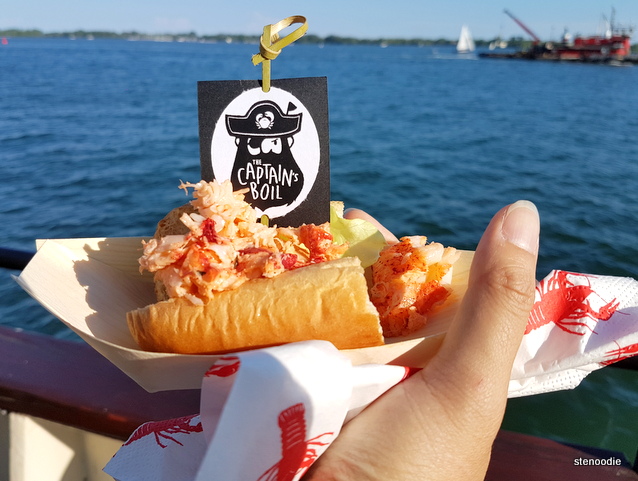 What a fun and creative way to launch brand new menu items!  The Captain’s Boil came to fame in the fall of 2015 when their very first restaurant opened in North York.  Since then, they have opened a sum of ten restaurants (and growing) in the Greater Toronto Area and expanding all across Canada.  I love their seafood boil meals; it’s all so finger-licking good! ^_^

Their newest menu items are their Lobster Rolls and Lobster Bisque!  They launched it by renting out “The Tall Ship Kajama” ship at Toronto’s Harbourfront.  I’ve never attended any event on this ship before and thought it was a genius move on their marketing department to launch the lobster items on pirate-themed ship!  Ridiculously fun and innovative! 😀 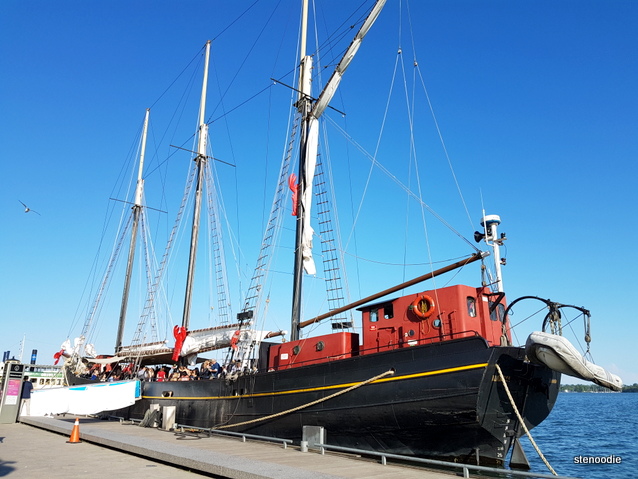 Captain’s Boil party on board The Tall Ship Kajama

The pirate ship party was slated from 6 to 9 p.m. on a Wednesday evening.  It was a beautiful summer day with perfect 25 degree weather; sunny with a slight breeze.  We couldn’t have asked for better weather for an outdoor event such as this one!

Mandy and I had trouble finding the venue at first.  Since the address on the invitation said ‘235 Queens Quay West’, I really thought it was at a building and not a ship (I thought it was too good to be true lol).  Long story short, we found the ship and boarded it.  The pirate ship was decorated with red lobsters on its stern and ports!  So fitting! 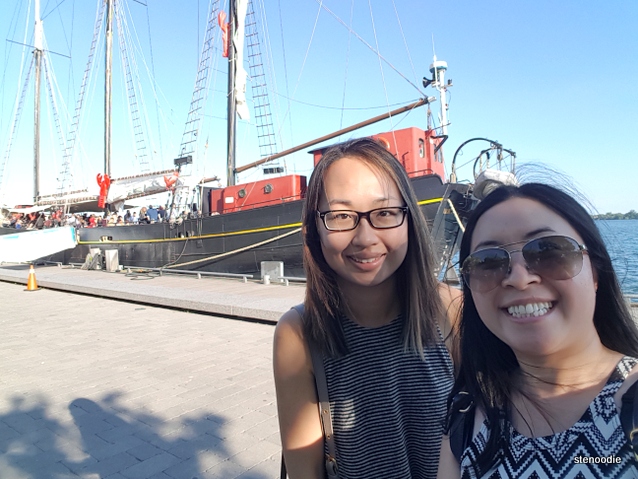 Yay! So excited! Never had a tasting on a boat before!

There were a lot of people already on the ship when we got there at 6:30 p.m.-ish.  There were lots of Instagram foodies that I recognized too.

The party was jumping when we got there! 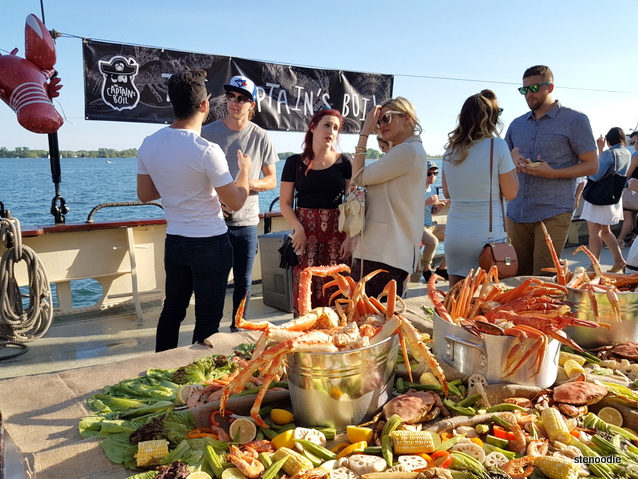 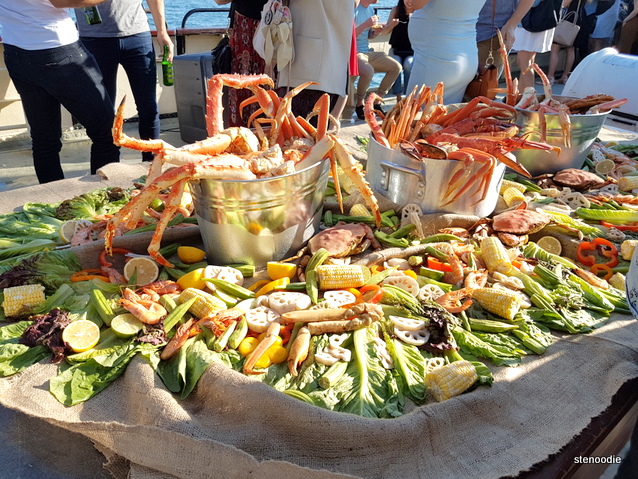 I wonder if these were eaten after the display was dismantled?

There were servers providing Lobster Rolls and Lobster Bisque all throughout the night.

As well, there was a station for drinks in a bag (but seriously, let’s think about the environmental concerns with excessive plastic?  I know it looks cool though).  There were three flavours: Soju Lemonade, Mango Passionfruit Soju, and Mixed Berry Soju.  I tried the Soju Lemonade and later the Mixed Berry Soju.  Everyone could agree that the drinks were watered down and you couldn’t taste much Soju in them.  However, they made for a good thirst-quencher.  The Mixed Berry Soju had a strong berry flavour. 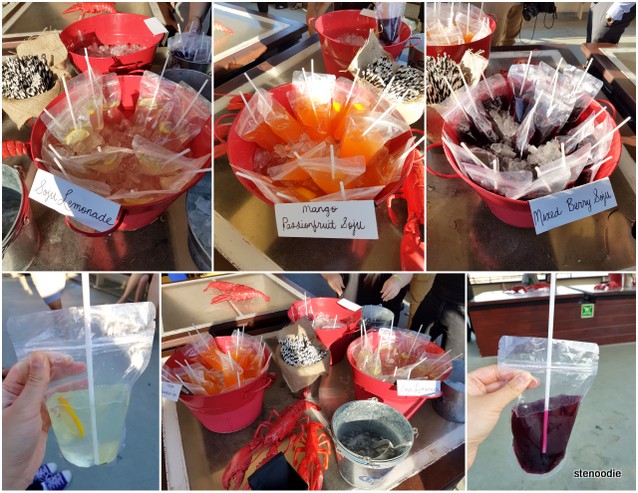 Drinks in a bag!

We could also get beers from the bar — so generous!  We could choose from the Corona or Steamwhistle beers. 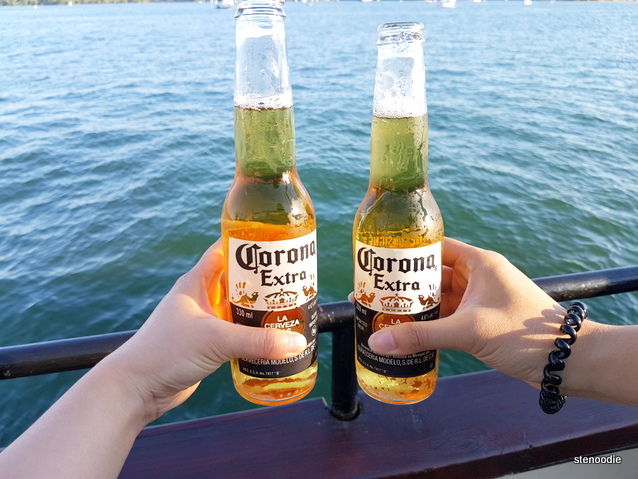 Cheers to being on a boat!

The Lobster Roll was a good sample!  It was a buttered bun with lettuce, crispy bacon, and chunks of lobster meat.  The lobster in each roll was quite substantial!  I liked the freshness and slight saltiness of the lobster meat.  Who can say no to a Lobster Roll?  I had at least four lol. 😀 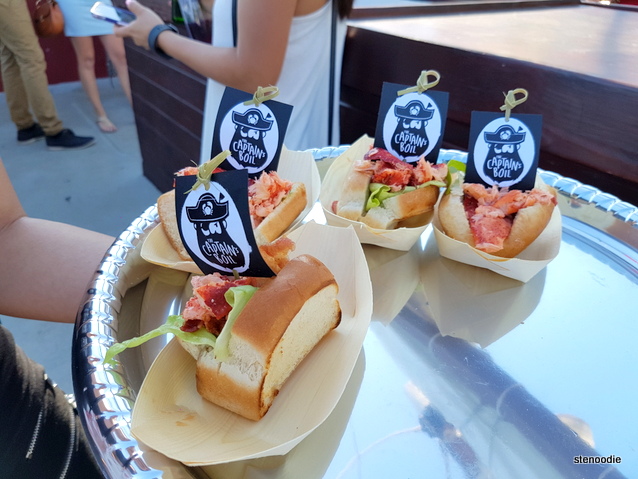 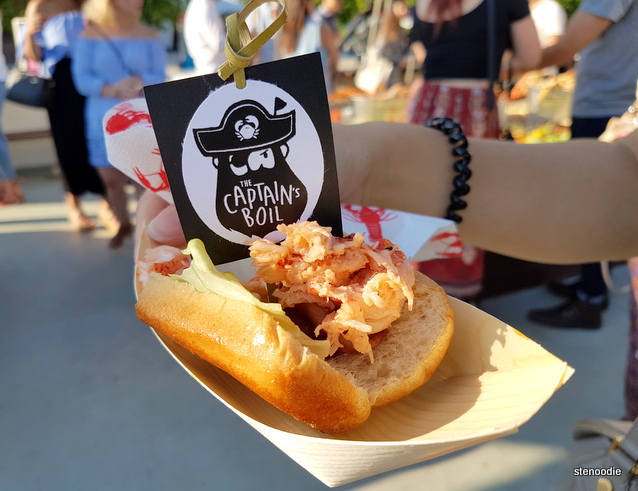 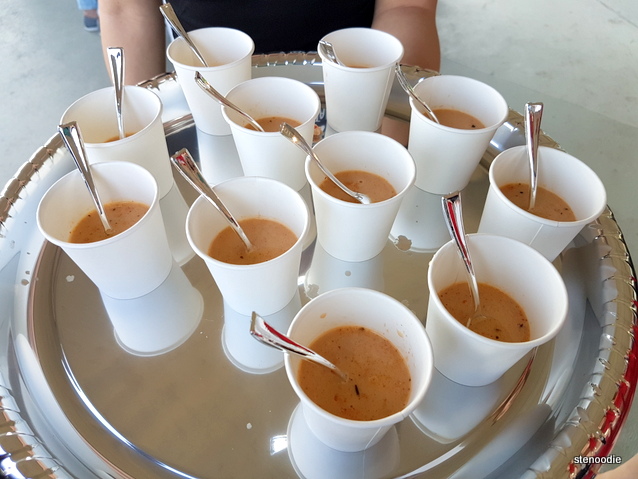 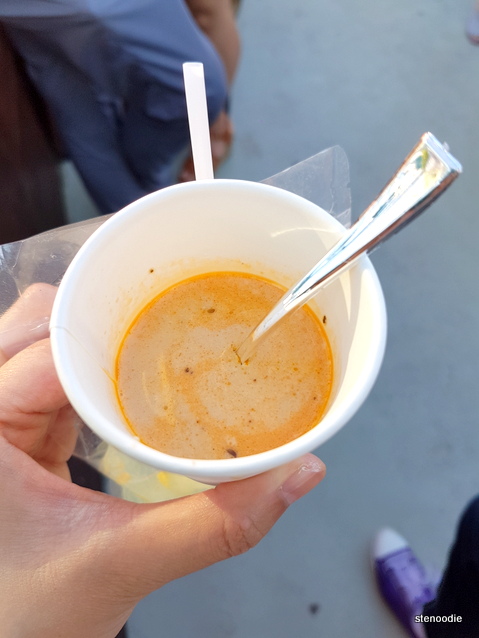 There was a fun photobooth too for us to take photos for keepsakes of the event.  There were props like giant lobster claws, plastic lobsters, pirate gear, and a “I’m on a boat” sign to pose with. 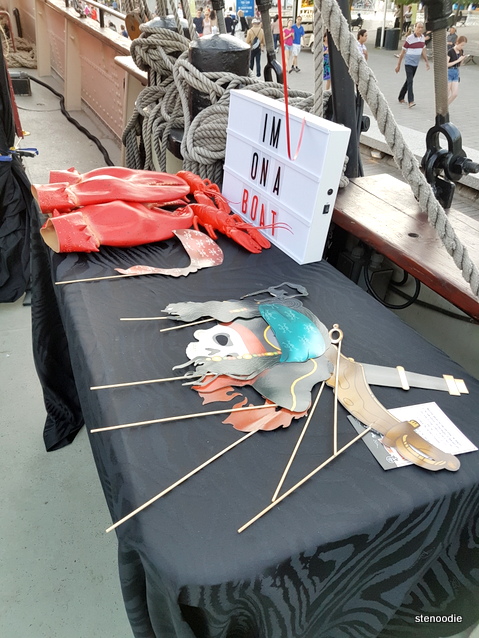 What a nice keepsake!

There was a photo contest as well! 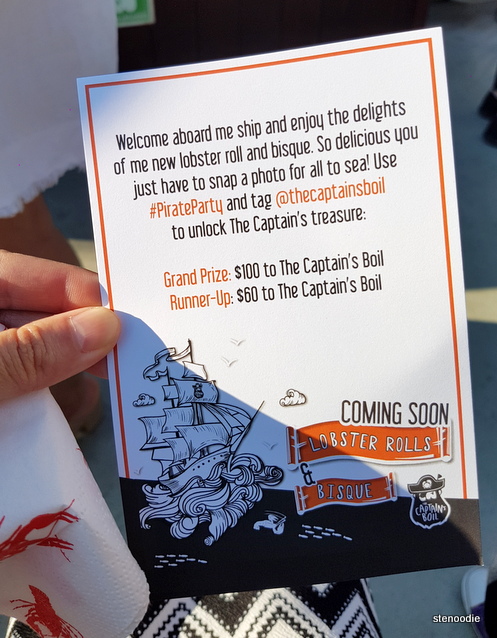 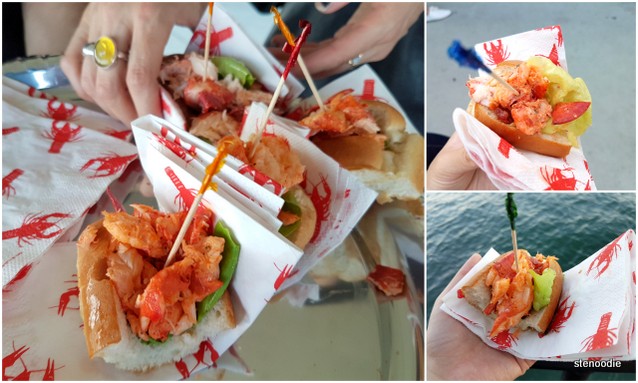 More Lobster Rolls! The latter ones were served in a napkin

I didn’t end up leaving the boat until almost 8:30 p.m.  (I thought it was considerate of the staff to phase the serving of food so that even latecomers would receive the food — I noticed that there was another new round of Lobster Rolls and Bisque coming out of the kitchen at 8 p.m.)  Since I left so close to the conclusion of the event, the event keepsakes were already distributed — I had spotted some mini bottles during the start of the event.  Oh, well.  If anyone received a keepsake, post a photo of it!  I want to see what it was. 🙂

Thank you to The Captain’s Boil for inviting me!  This was truly a one-of-a kind launch party and I’m so glad I attended! 😀  You can visit their website to see where the closest location of The Captain’s Boil is for you so that you can try out their scrumptious new lobster offerings! 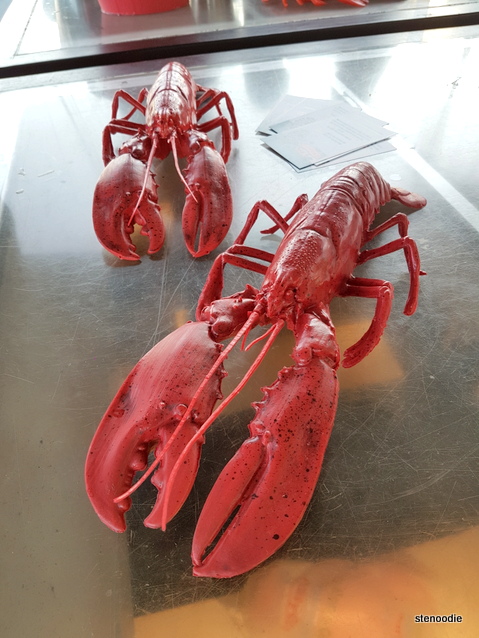 Plastic lobsters for photography use 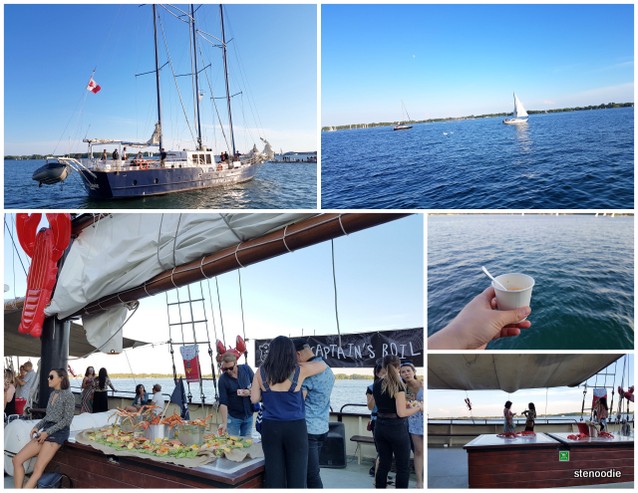 The best day to be outdoors! 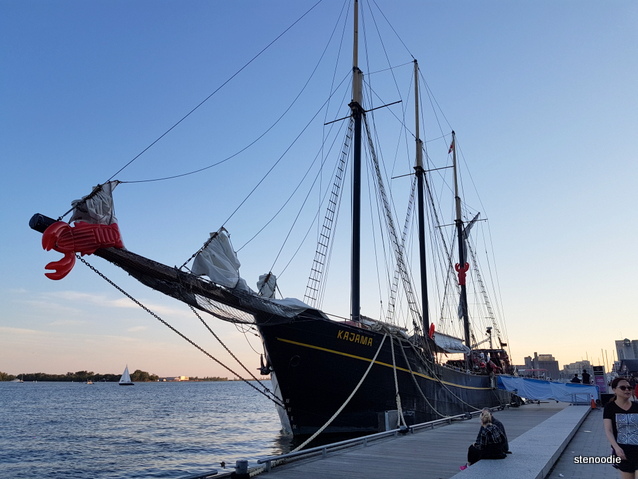 FTC Disclaimer:  Although The Captain’s Boil reached out and invited me to a complimentary tasting to showcase their new menu items, the opinions expressed here represent my own and not those of the restaurant.