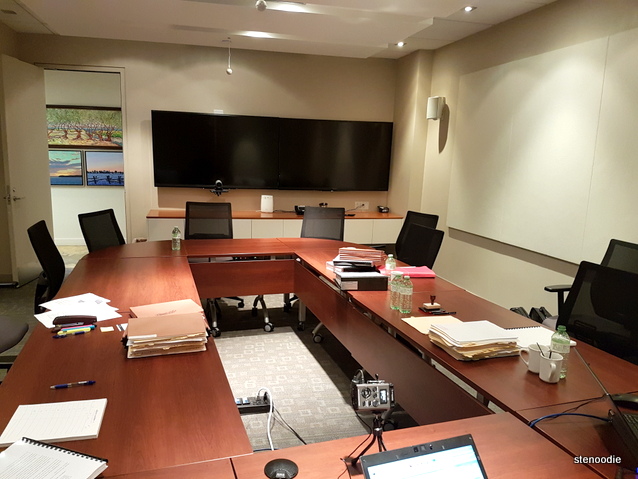 This was a crazy week of steno adventures. 😀 :O

It started on Monday.  I was supposed to sit on the same matter for all five days this week (a feat that I still haven’t achieved yet — earlier this year I was scheduled to sit for five days but then due to a transcript expedite, one of the days was switched over to another reporter for my own sake).  The Monday began with walking into a room of four policeman who were stationed there to bolster security.  It was for a “infamous licensee” in the hearings that was known for certain “choice words” (remaining vague so I don’t give away too much?!).  Anyway, this was only the second time I had had policemen in my courtroom.  The environment was only heightened when the clerk told me out of an abundance of caution that if anything were to happen — the worst case scenario — I would follow her with the panel members through the back door and leave right away.  It was serious!

I was apprehensive but also ready.  Unfortunately or fortunately, the individual in question never even showed up for his hearing and thus the proceedings were given permission to proceed without him.  It ended up being a short day (yay).

It was interesting because just as I was about to pack up and was in fact packing up, the clerk ran back into the room and told me not to leave yet — the panel members had decided to continue the case after all and not leave it until Friday due to security issues.  Luckily, we were able to get the counsel member back and we resumed the hearing for another ten minutes to speak of schedules.

We continued said hearing on Tuesday.  Because we were doing penalty submissions, it was a short day.  All of a sudden, my five-day week only consisted of two days — but wait, it doesn’t end…

As I was confirming schedules with the coordinator and she found out that my hearing had completed, she shot me an urgent e-mail requesting me to go to the office for a last-minute job.  I said I would be able to get there in 30 minutes.  This was definitely an urgent matter because the arbitrators and counsel decided to go ahead without a reporter in the room and our lovely front desk staff had to sit in with a recorder at noon.  I ended up waiting for 1.5 hours before they took a break to allow me to slip in to take over.  It was a special day to be able to chat with two other reporters and a student reporter that day while I was waiting — seriously, what are the chances that we were all free that day just to sit in the kitchen and chat?!

The arbitration was my first (or second now that I think about it).  The room was huge and set up arbitration style with the panel members to the right of me.  Everyone spoke into mics which made it super clear and articulate.  Unfortunately, I found the material a little dry.  Fortunately, I’ve done an examination on this case before so I had most of the names.

They didn’t finish until 5:20 ish but good thing I still had enough time to dash back uptown for a tasting. 😀 (They actually wanted to go later but a panel member had a conference call at 5:30 and thus we completed at 5:15.)

The next day, the arbitration continued.  This was a full day of arbitrating and I found relief during the lunch break to have some me time.  During the afternoon break, I also saw some unusual activity on the streets below me.

Although the panel members didn’t want to stay late and to end promptly at 5 p.m., this did not happen.  I got my second overtime job!  Counsel had too much to say and there was a lot of arguing back and forth.  I watched the clock like crazy, especially for the 15-minute intervals.  Finally, we finished by 5:52 p.m. with just enough time for me to dash over to dinner in the west end. 😀

They didn’t end up sitting the next day (they were thinking of doing so and if they did, I would have been able to leave my steno bag there).  Thus, I was able to go on my originally scheduled exam at a brand new location!  I love going to new steno locations.  There’s such a thrill to it because you don’t know what to expect.

I ended up really liking the venue of this law office.  The boardroom was so large, spacious, so comfortable, and was so close to the washrooms and kitchen.  This made it so easy to just slip out to use the restroom and the layout was so straight-forward.  What boardroom dreams are made of essentially lol.  A cherry on the top would have been a pre-existing extension cord or outlets on the table but it was still a really sweet location. 😀 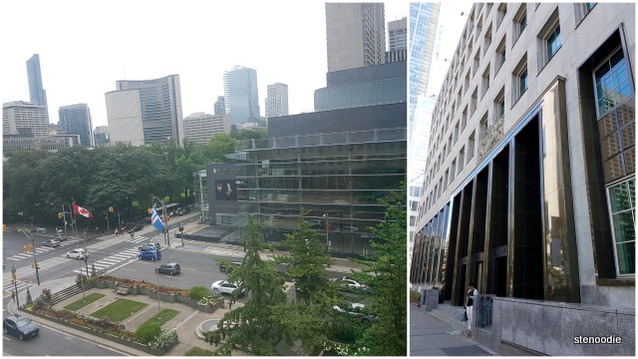 The view from above. Does anyone recognize which building this is?

I’m happy I get to work from home tomorrow after such a long crazy week.

I'm a stenographer, foodie, avid traveller, and new mom who loves to share her experiences with the world.
View all posts by stenoodie →
This entry was posted in Steno and tagged court reporting, steno adventures, steno blogger, stenography. Bookmark the permalink.