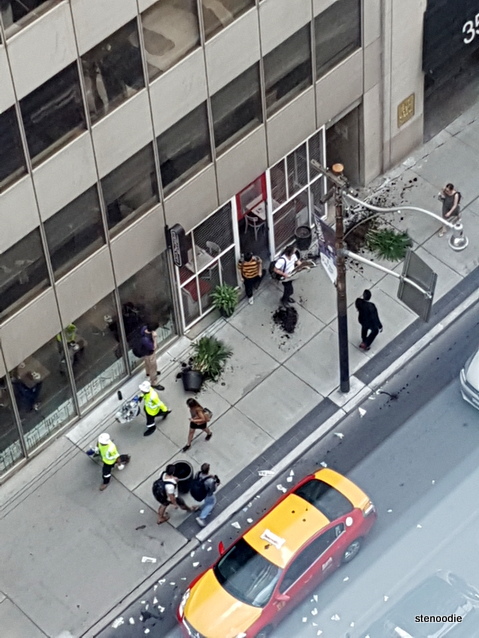 Today I saw something unusual outside the window.  First of all, it was an unusual move on my part as I rarely look out the window (for an extended period of time anyway) to notice anything significant.  I was on the ninth floor of the building at Bay and Adelaide for a job and all of a sudden I noticed a man on the street pick up a potted plant that was in front of a restaurant and THROW it directly onto the street where there were lots of cars moving.  What the…  It immediately caught my attention and I zoned into what this particular guy was doing.  The rest of the passerbys on the street seemed baffled too.  Next, this man grabbed the next potted plant and threw it down on the road, scattering out all of the soil and the plant thrown halfway out of the pot.  He did this erratically to the other 2 plants too before walking away briskly.  In this time, with my phone already in my hand, I was able to snap a video and some photos too.  It was such unusual behaviour; I’ve never seen something of this sort so out of the blue before.

I wonder what happened to trigger him to do something like this?

I'm a stenographer, foodie, avid traveller, and new mom who loves to share her experiences with the world.
View all posts by stenoodie →
This entry was posted in Weekly Photo Challenge and tagged downtown Toronto, from the ninth floor, postaday, things you see when you look at the window, Toronto, Unusual, weekly photo challenge. Bookmark the permalink.