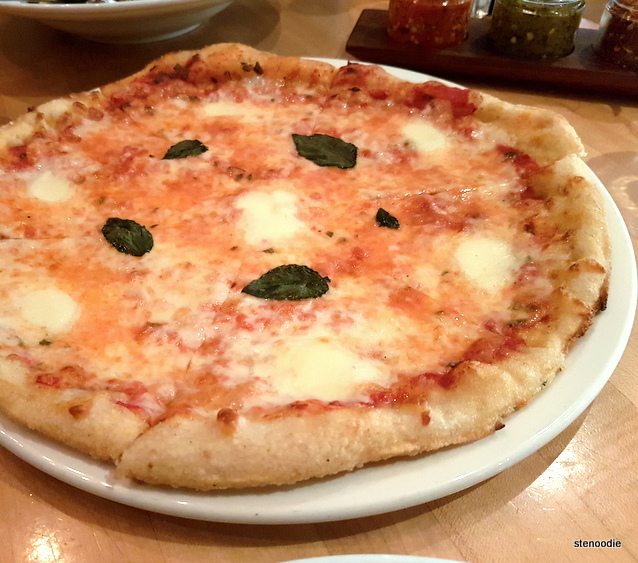 After our escape game at Casa Loma, Priscilla and I went to PAESE Ristorante for dinner!  I had won a $50 gift card to PAESE (thank you @girlswithnofrills for hosting the contest!) and was eager to redeem it.  Thus, it was perfect that we were in the area already and planned to have dinner here.

I had been to PAESE Ristorante many years ago when they were located on King Street West in downtown Toronto.  I remember having really fond memories of the meal that Betty and I had had there.  I remember we went there for Summerlicious and had such an amazing meal — the service was great, the food was unique and delicious, and the portions were large too.  That still remains one of my favourite meals.  Thus, I was sad when I heard that they had shuttered their downtown location as I thought it was closed for good.  Fortunately, I found out later that they had simply relocated to the midtown area of Bathurst and Wilson.  Since then, I had been curious to return to it to try the food again. 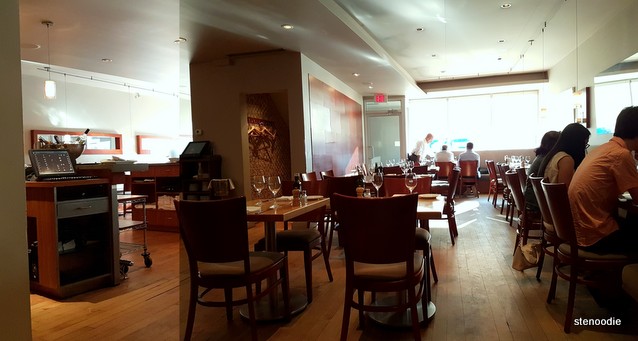 The interior of the restaurant from our table view

Priscilla and I had made reservations for our Saturday night dinner just in case.  We arrived at 6:20 p.m. and were one of the first customers there.  We had actually arrived during the three-week period of Summerlicious and were presented the $38 Summerlicious prix fixe menu along with the regular dinner and drinks menu.  Although the $38 three-course meal was a really good deal, we decided to order off the regular menu (that doesn’t happen a lot with me!  I usually like prix fixe menus but nowadays my taste feels more “refined” and I like to order specific things.) 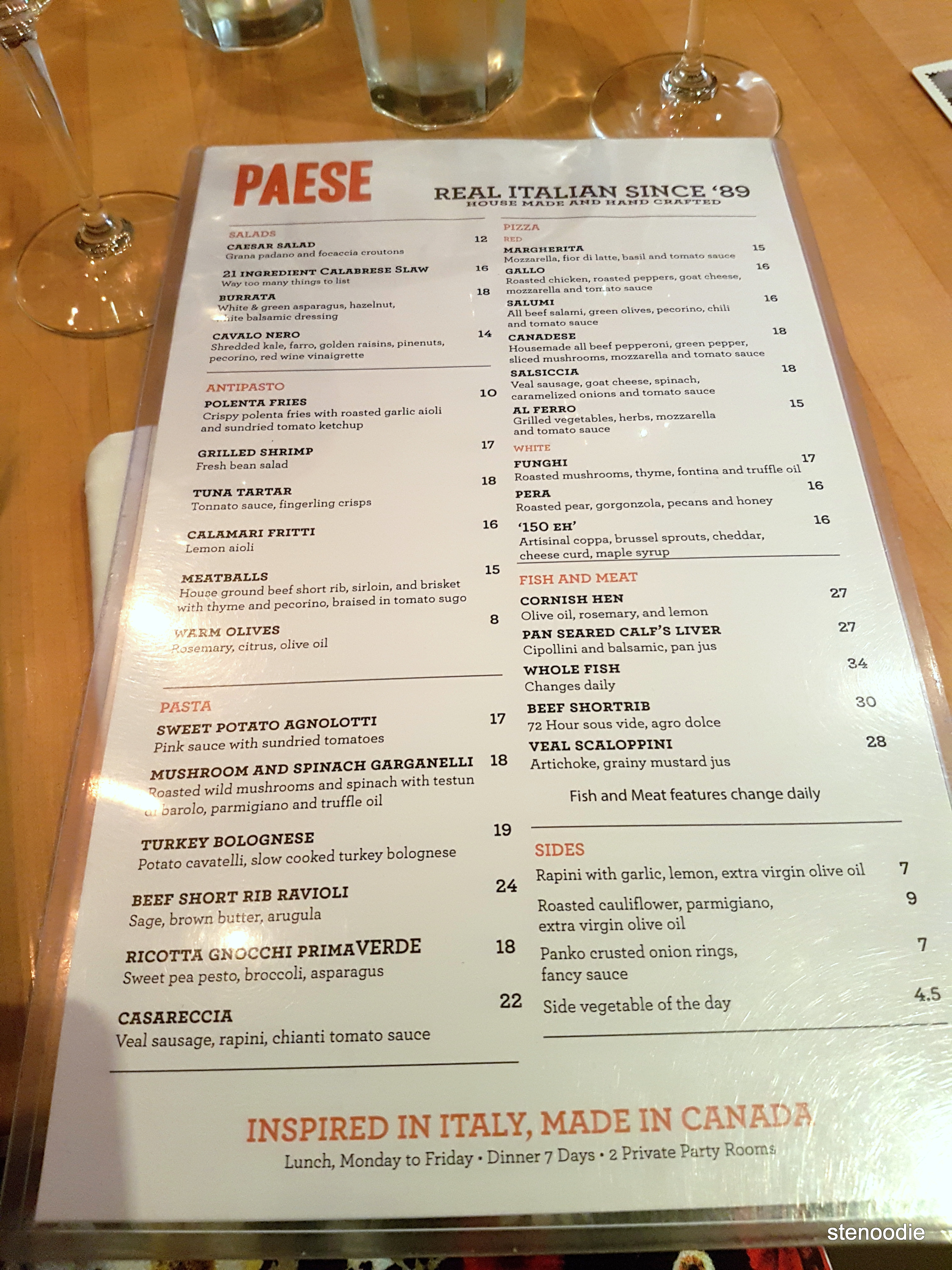 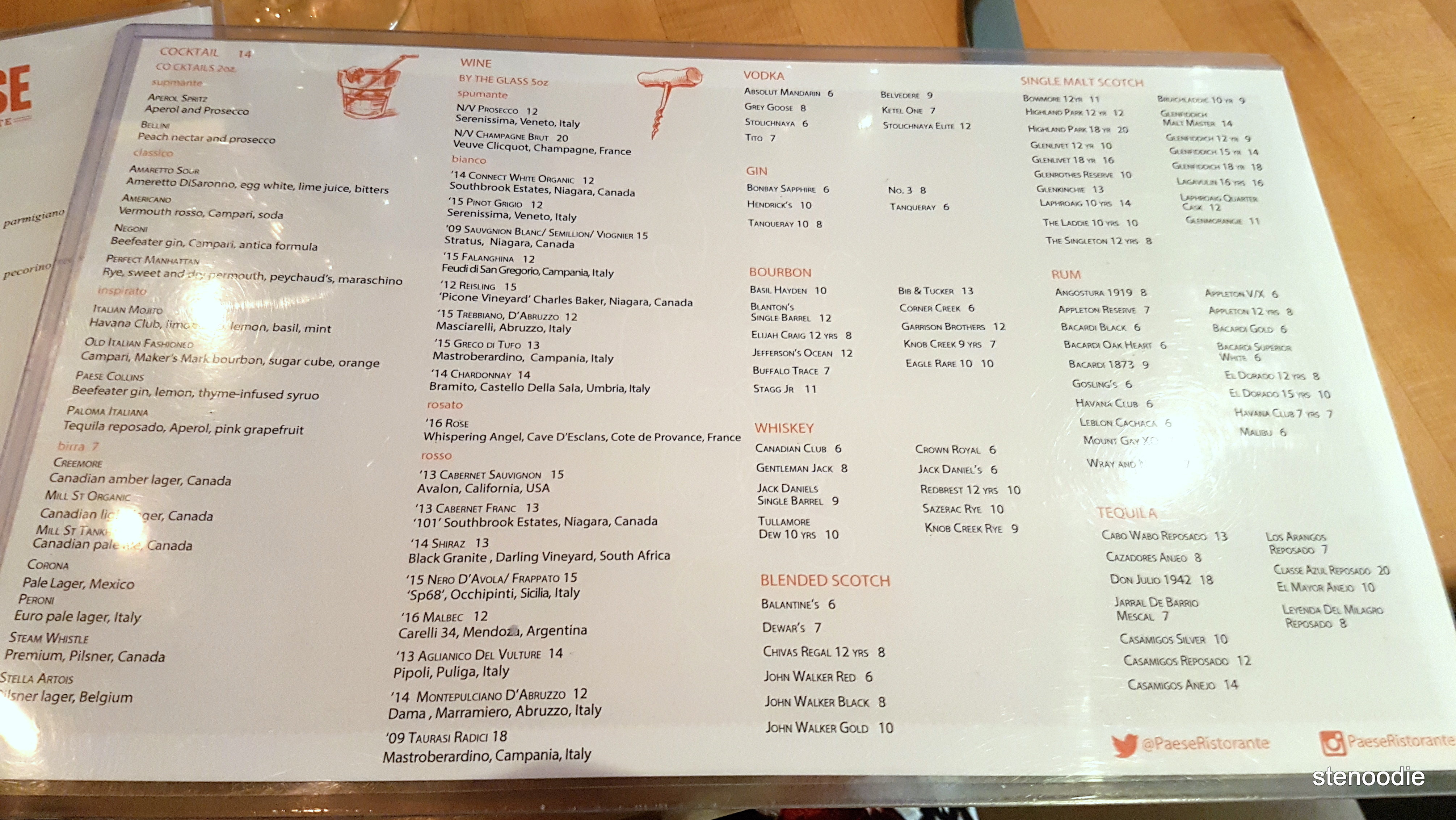 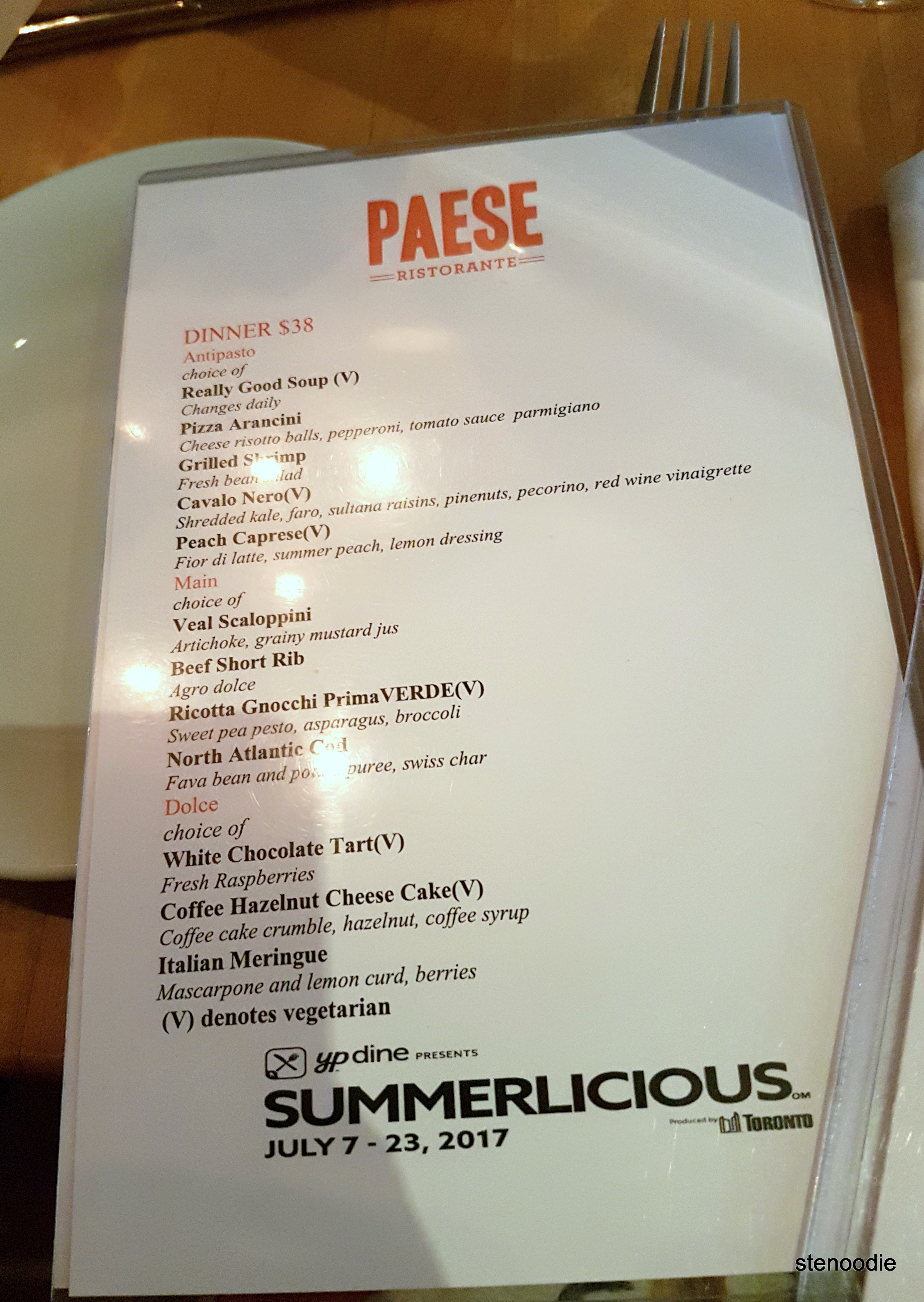 Since we had a $50 gift card, we felt the desire to splurge a little bit. 😀  We ordered two cocktails to start.  I had the Paese Collins, a cocktail with beefeater gin, lemon, and a thyme-infused syrou.  It was refreshing!  I was also impressed with this cocktail because there was sufficient alcohol content in it.  After a few sips, I definitely felt the alcohol!  I liked this because it meant that the restaurant did not cheap out on the ingredients. 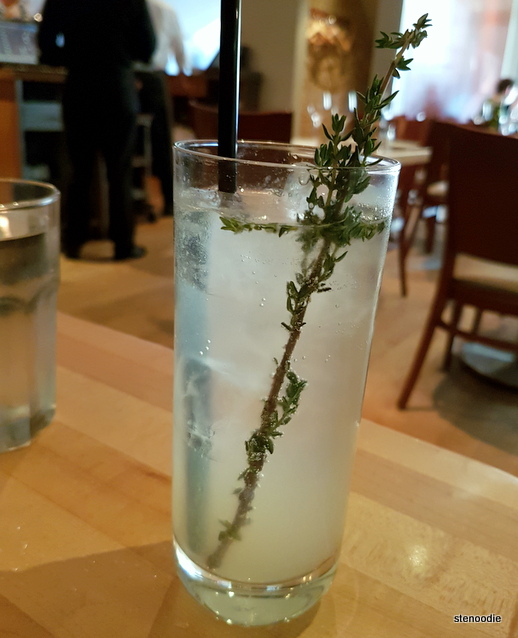 Priscilla had the Paloma Italiana, a cocktail with tequila reposado, Aperol, and grapefruit.  At the time, I think I liked it but it wasn’t very memorable now when I’m blogging about it.. lol.  (I do remember that it was just as strong as my cocktail meaning that again, they included sufficient alcohol into it — you’ll be surprised at how many restaurants cheap out on the alcohol in cocktails.) 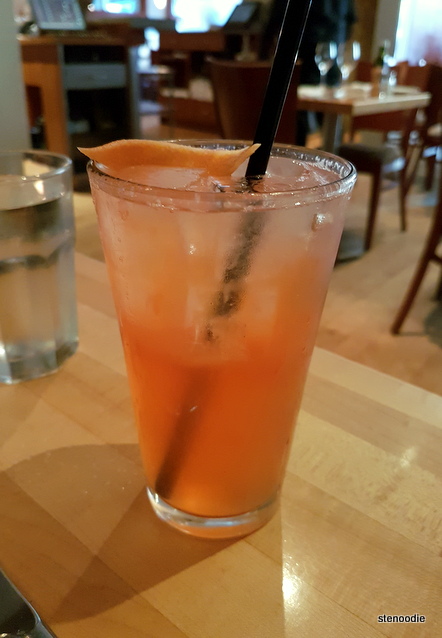 We were served some bread with an olive spread (that had something else in it but I forget what it was now).  The olive spread was so delicious and tasted like fresh olives!  Yummy. 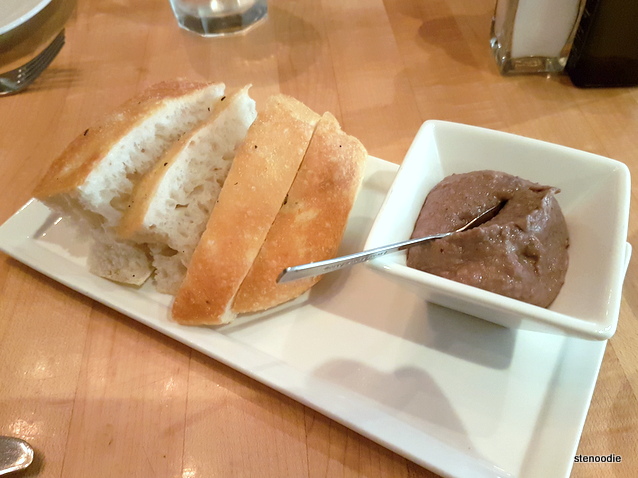 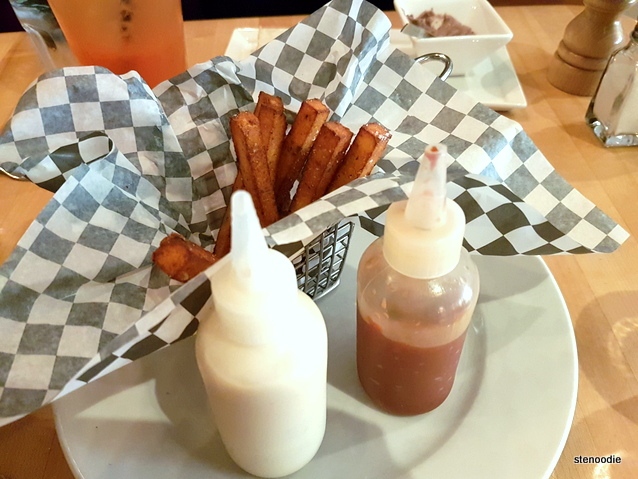 For an antipasto to share, we had the Polenta Fries.  These were polenta fries served with roasted garlic aioli and a sundried tomato ketchup.   I’m a fan of polenta fries but I was really disappointed in this dish because of its portion size.  The presentation of it was unique — the fries were served in a mini cart with paper.  However, since there were only seven or so polenta fries, it didn’t look like there was very much of it at all.  The two dipping sauces were served in small squeezable plastic bottles.  I think to improve this dish, they should display it differently to emphasize the fries and not a couple of small fries in a large cart and plate. 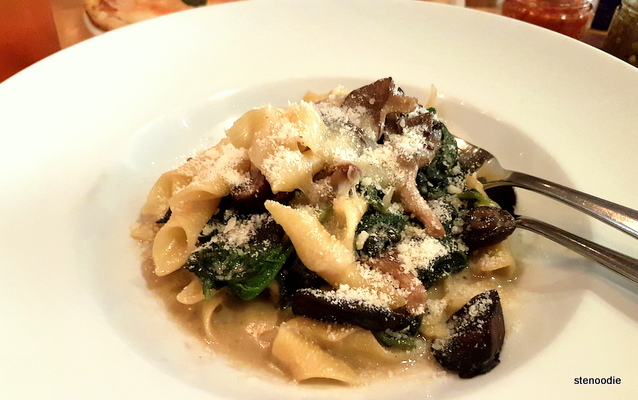 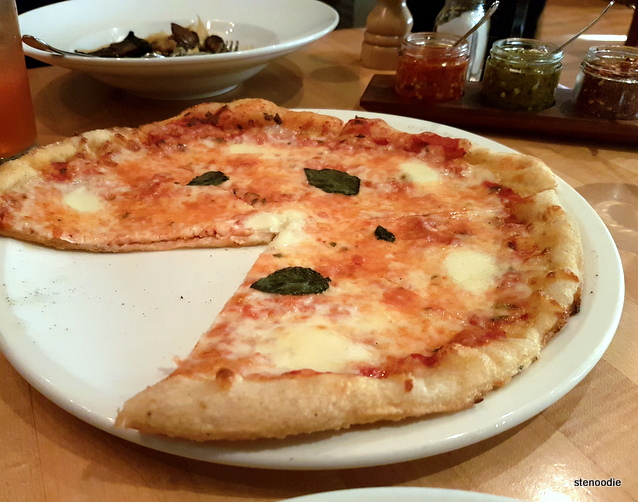 The Margherita Pizza is a classic pizza to order.  It had mozzarella, fior di latte, basil, and tomato sauce.  Unfortunately, I thought that it’s presentation wasn’t impressive at all.  I expected the fior di latte to have melted in a more pronounced display on the pizza.  Instead, it looked just like a flat cheese pizza lol.  XD

Taste-wise, the Margherita Pizza was all right.  I liked the cheese in it.  I also expected there to have been more fresh basil leaves on it to look better (look at the photo of the Margherita Pizza on their website and you will see a big difference between the stock photo and this real life one).  Instead, the few pieces of basil on it were wilted due to the heat of the pizza.  Each bite of the pizza did have basil flavour though. 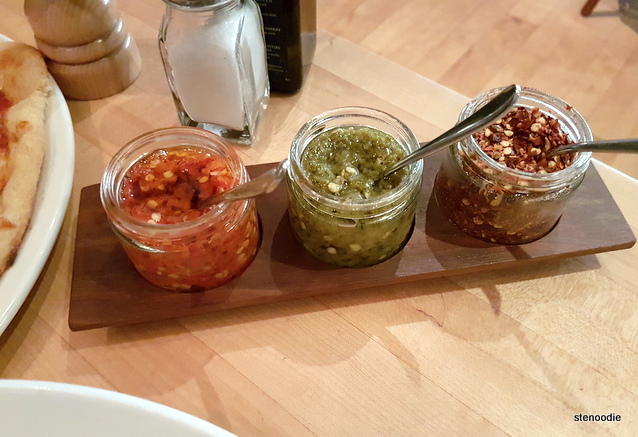 Peppers for the pizza 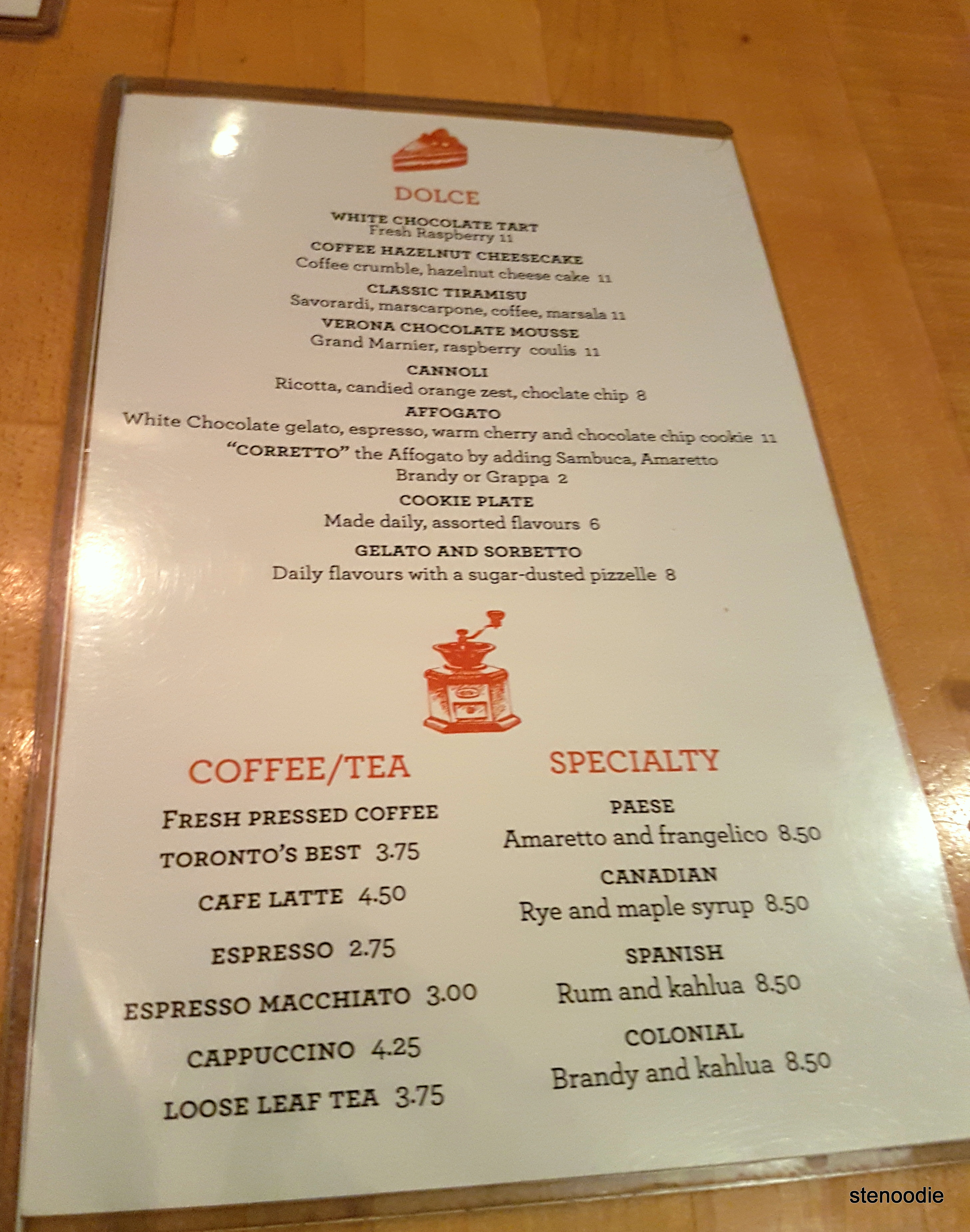 We ordered two desserts.  The Verona Chocolate Mousse had Grand Marnier and raspberry coulis.  The chocolate mousse was very soft and creamy.  The chocolate flavour was definitely evident.  It was a pretty dessert too. 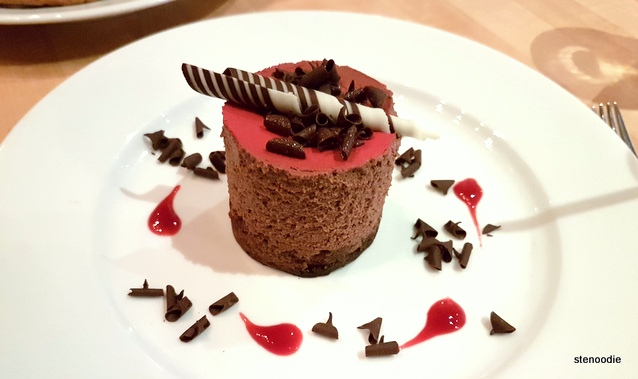 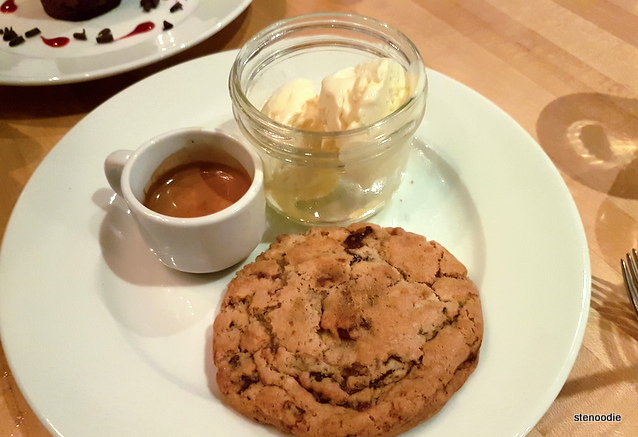 One of the desserts that I remembered having from my first visit to Paese that stood out in my mind was the Affogato.  At the time, I didn’t know it was called an affogato but only that there was ice cream where you poured espresso on it and there was a huge delicious cookie (that Betty and I couldn’t even finish because we had been so full that time).  I described it to Priscilla and she was curious about it and thus we ordered the Affogato on this visit.  It had white chocolate gelato, espresso, and a warm cherry and chocolate chip cookie. 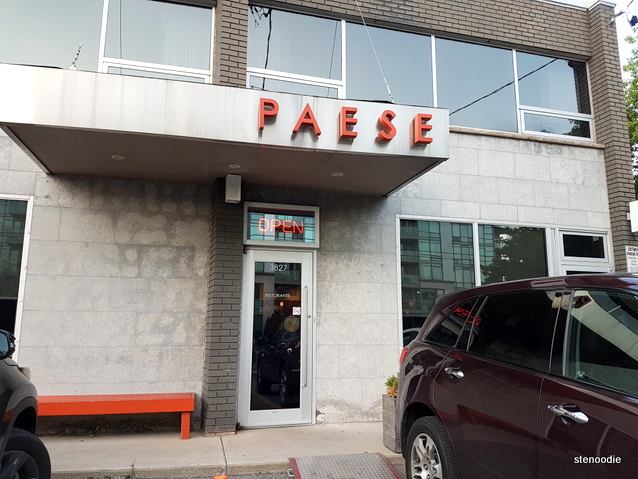 Its storefront is quite nondescript

I’m glad that I got to try the new PAESE again and with the benefit of a gift card too!  I was disappointed that they simply serve Italian classics now and the creative dishes that I tried at their King Street PAESE years ago weren’t available any longer.  Thus, to me PAESE is just like any other Italian restaurant — their food was good but did come at a price.  The service was very professional though!