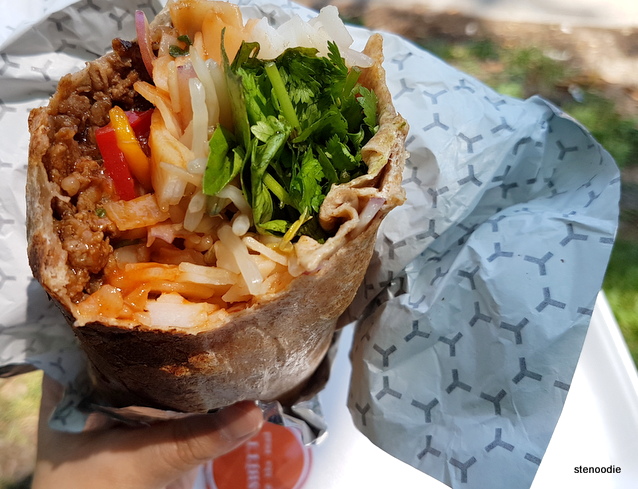 Sushitto on the Road, a moving food truck in Toronto

This past Monday, when I was heading to work for an afternoon job, I spotted the Sushitto on the Road food truck right outside my work building!  I had only seen this food truck for the second time (first time spotted them at the second Coconut Festival that I attended) and had never tried them before.  As far as I know, Sushitto on the Road was the very first vendor in Toronto to serve sushi burritos when the food trend blew up in 2016.  I had always wanted to try their sushi burritos and never got to do so because they are a moving food truck that spots at a different spot each day in Toronto during the summer months (winter too?  Not sure.).

Thus, I was determined to try Sushitto on the Road since I saw them right up and centre!  I wanted to try them especially because I had noticed that they were the only ones in Toronto as of the time of writing that served the brand new pho-burritos too.  A Pho-rritto is the lovechild of a bowl of pho (Vietnamese rice noodles) and a Mexican burrito.  Although food trends come and go, I definitely was curious and wanted to try this new creation out. 😀 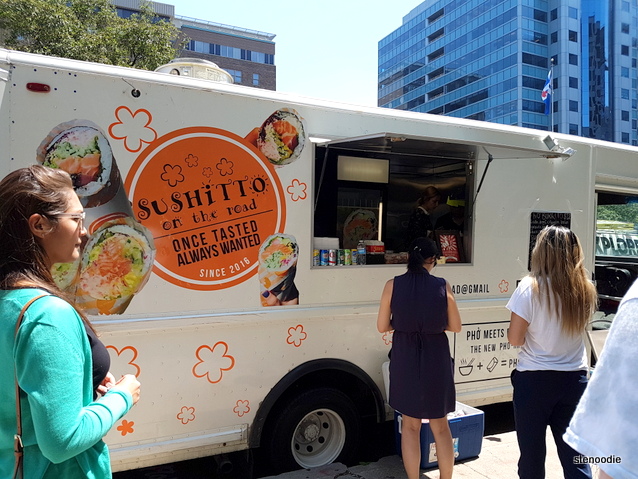 Sushitto on the Road during lunch hours

I tried the pho-rrito on Tuesday (since I was already full from lunch on the Monday when I spotted them).  Luckily, their Instagram page told me that they were just up the street from where I worked that day.  Also, I was lucky that I had a relatively long lunch break that day and didn’t have to work over lunch either in order to be able to walk outside of the building and up the street to where Elm Street and University Avenue was.  The Sushitto on the Road food truck was parked across the street from where the Sick Kids Hospital was.  I was so excited to approach and order my first item from Sushitto on the Road! 😀

There was a moderate line-up of people here waiting for their lunch orders when I arrived to the food truck.  The Pho-ritto cost $12.  It had a choice of whole wheat or white tortilla (I chose the whole wheat), beef, cilantro, bean sprouts, rice noodles, hoisin sauce, peppers, and onions.  After I placed my order, I waited about ten minutes to receive it.  I was actually surprised with how short the wait time was because it seemed like I got my order before even some of the other customers who had arrived before me. 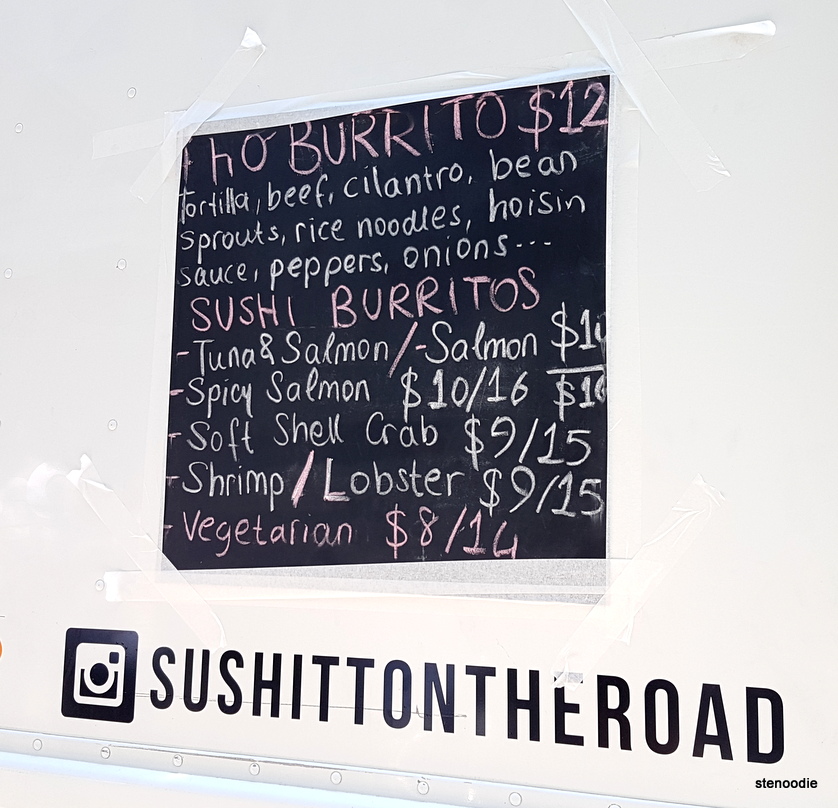 Sushitto on the Road Menu

It was such a beautiful perfect summer day with a breeze, no humidity, and sunshine.  I sat outside to enjoy this pho-ritto. 😀 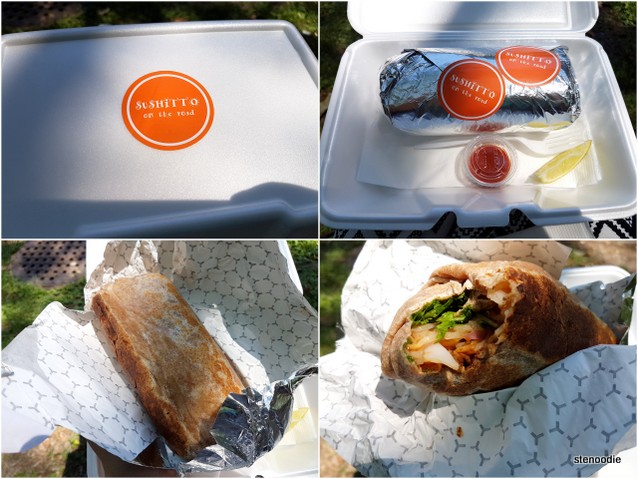 The ordering of the famed Pho-ritto

The pho-ritto was placed into a Styrofoam box with the Sushitto on the Road logo sticker on the top of it.  The huge pho-ritto was inside the box along with a plastic fork, one slice of lime, napkin, and a container of Sriracha sauce.  I was so excited to try it! 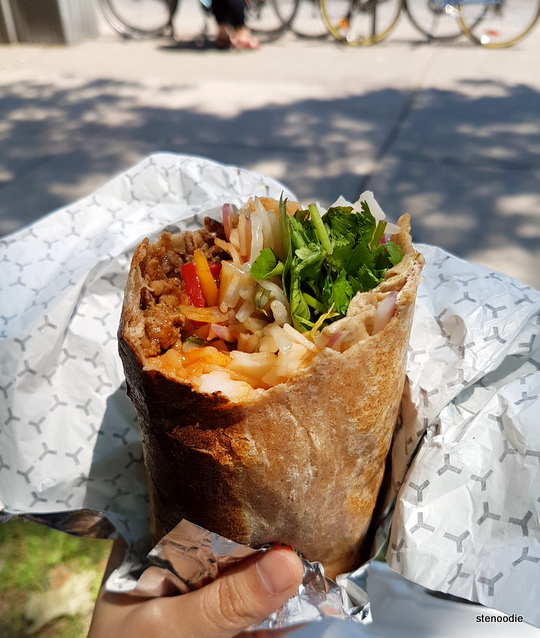 The pho-ritto was huge!  It was wrapped with a piece of foil paper.  I was really impressed with it!  I had previously noted online reviews that stated the pho-ritto wasn’t up to par because it lacked the quintessential part of the pho broth.  I think that’s a silly comparison to make; if you want a bowl of hot steaming pho with the broth, go for an actual bowl of pho in a restaurant or make it at home!  The fusion of pho plus a burrito is exactly what Sushitto on the Road has created.  It was a burrito with all of the pho elements in it and was made as creatively as possible.  The beef was very juicy and very well flavoured.  I loved it.  There was a lot of cilantro which broke up the heavy meat and carbs.  I was actually surprised to see rice noodles in it too (having not carefully read the description of it when I got it) but it made sense to have rice noodles in it to relate to the pho part.  However, I thought that the rice noodles were a little too hard for my taste.  I loved the pho-ritto thoroughly and thought it was very well made!

I do have to say that I went into this with low expectations due to having read negative reviews online.  Thus, I was pleasantly surprised and extra impressed when I found out that it was a delicious work of art!

Since the phoritto was so large, I actually didn’t finish the entire thing in one sitting.  I saved the rest of it for an afternoon snack later that day. 🙂 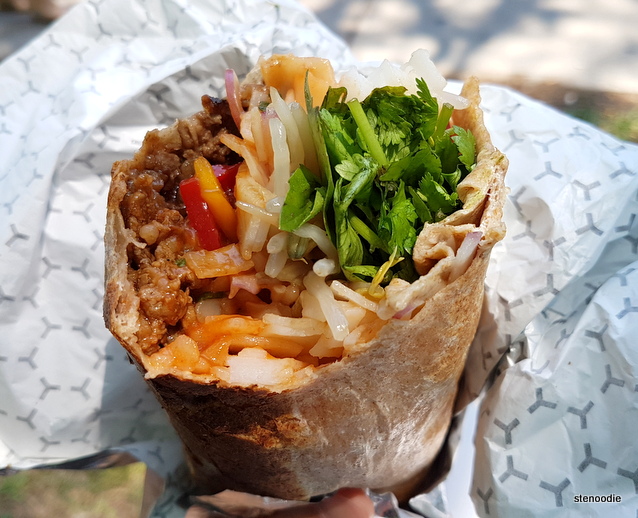 There was so much stuffing in it! Well worth the $12 for lunch!

(The Sriracha sauce gave the pho-ritto a good kick and the lime helped to give some acid to the heavy meal — I wish the lime was bigger actually!)

The next day, I wanted to try the spicy salmon sushi burrito creation from Sushitto on the Road but the truck had already moved to another neighbourhood.  Hopefully I’ll get to try it when they’re in the area again! 🙂 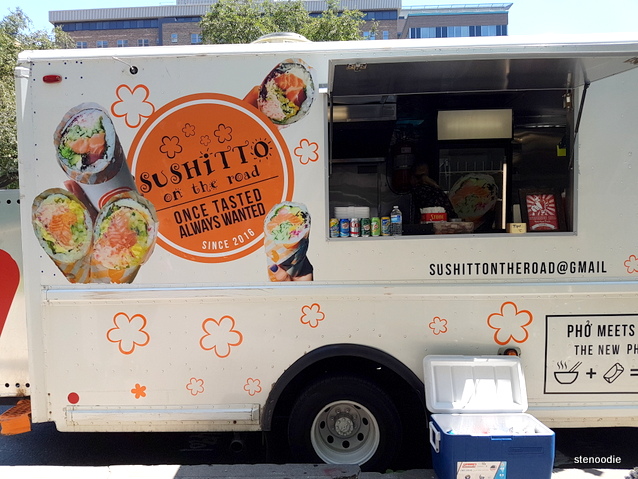 (Actually, they have an actual store in Little Italy too!  Maybe I’ll visit someday… :))