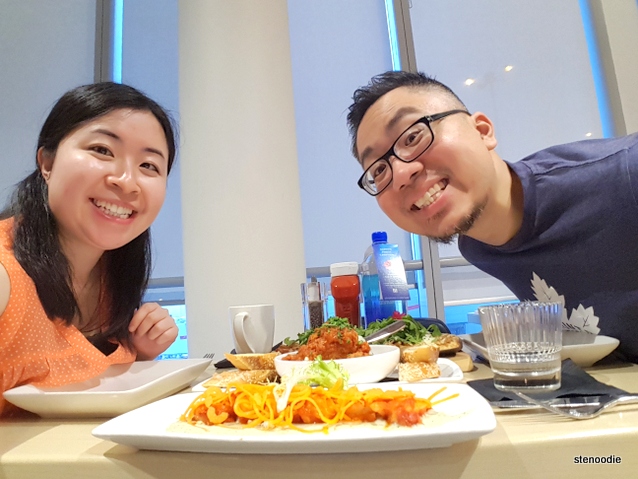 Dinner at the airport before flying!

This blog post comes nearly three months after we actually went to New York in April of 2017.  Oops!  With transcripts and work and being tired for two weeks after the trip and letting everything pile up, I had created another backlog for myself and thus never got around to blogging about this trip that we had.  But no more!  It’s going to be blogged this week before we head to another foodie city. 😀

This blog post covers our trip to New York starting on April 27, 2017!

I’ll begin with our dinner and flight to the Big Apple.  We were so excited to go on our first airplane trip together! 😀 😀 😀

Since we arrived three hours early to the airport, we ate dinner at the airport — our boarding time for the flight wasn’t until 8:20 p.m.  We were all checked in and ready to go and since we only had carry-on luggage, we didn’t have to worry about checking in luggage for the short one-hour-ish flight. 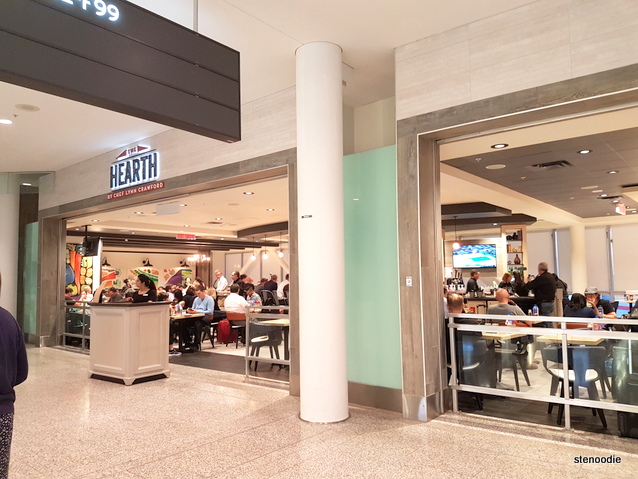 The Hearth located at Terminal 1 (After Security), Level 2, Near Gate F60,

We decided to eat at The Hearth by Lynn Crawford, a well-known Canadian celebrity chef.  (I had previously tried out her restaurant, Ruby Watchco, a few years ago.)

I was quite impressed with the selection of new restaurants that were open at Toronto Pearson Airport actually.  The Hearth looked like a really great restaurant!  Since it was a restaurant inside the airport, we were assured that the service would be quick for those passengers needing a fast in-and-out experience.

I really loved the design and feel of the restaurant too.  There were some very Canadian elements to the restaurant and this further added to our first meal of our trip. 😀 😀

We ordered a few appetizers to share since the mains weren’t too appealing for us.  We ordered the Hearth Flatbread with spicy sausage, olives, ricotta, and arugula; Old School Meatballs; and Buffalo Shrimp from the Hearth. 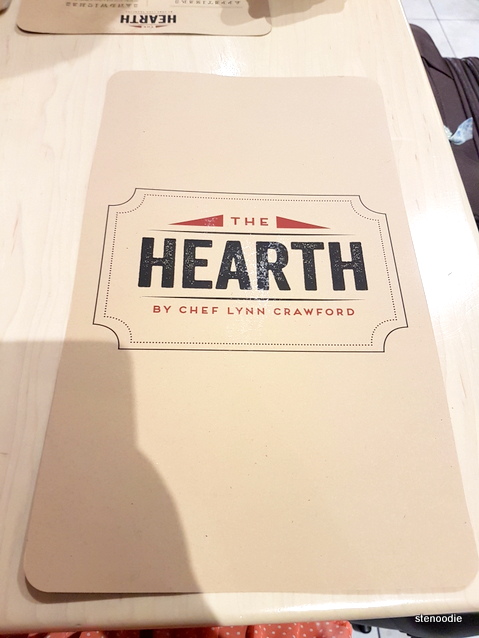 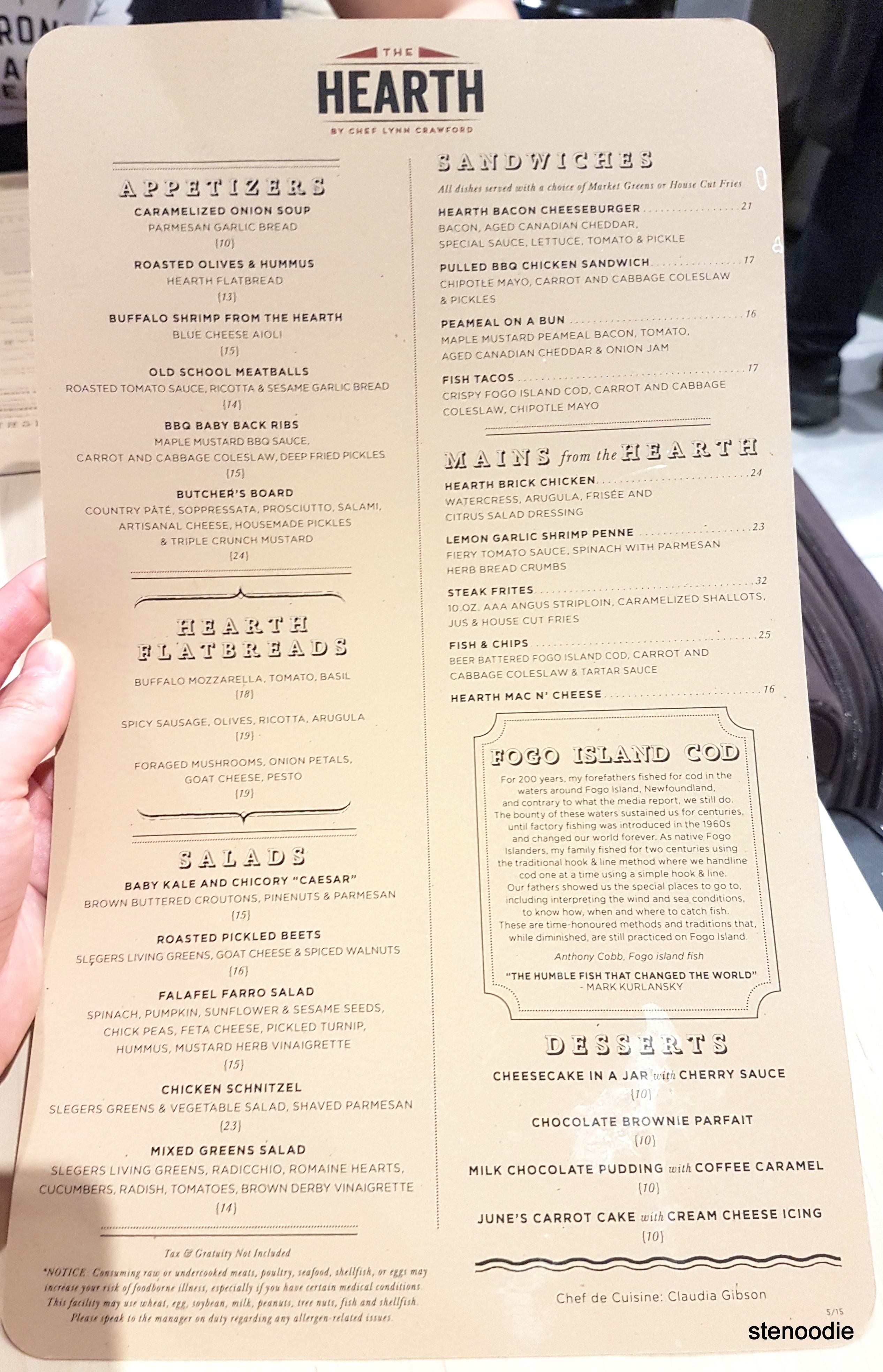 Since we were seated near the window and my seat was facing the kitchen, I saw all of the dishes that came out of the kitchen and sat under the heating lamp waiting to be served to their owners.  I liked watching the food come out. 😀 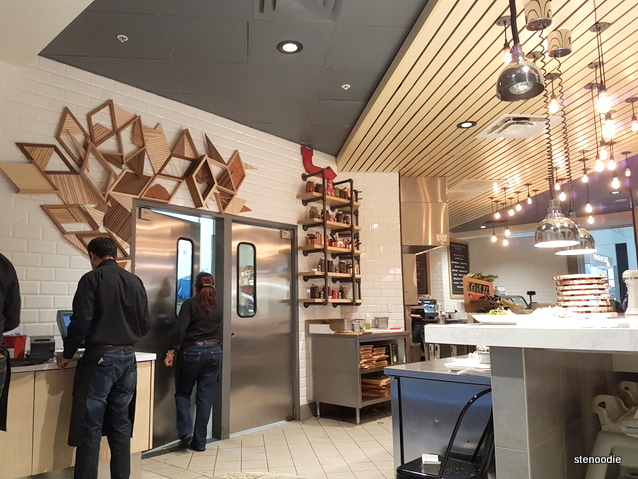 Their wood elements reminded me of Canadian themes 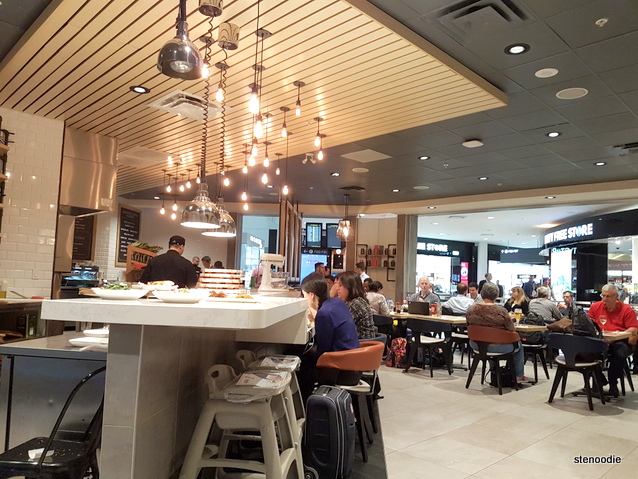 Our food was really good!  Everything was nicely presented, colourful, and tasted good. 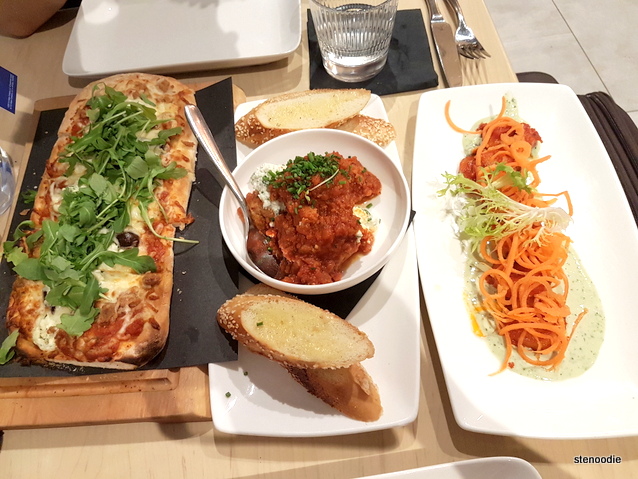 I liked the Buffalo Shrimp which came with a delicious blue cheese aioli.  I could have licked the plate actually. 😀  The shrimp itself was good too. 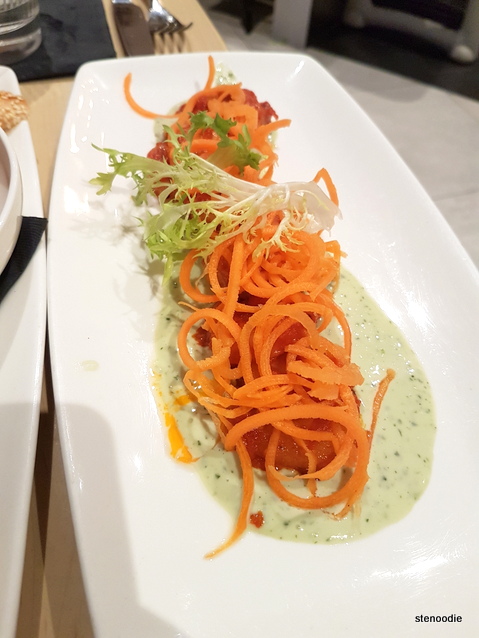 The Old School Meatballs were covered abundantly with a roasted tomato sauce, ricotta, and served with sesame garlic bread.  The meatballs were chunky and large; just the way that meatballs should be served at a restaurant — it’s so much more satisfying this way. 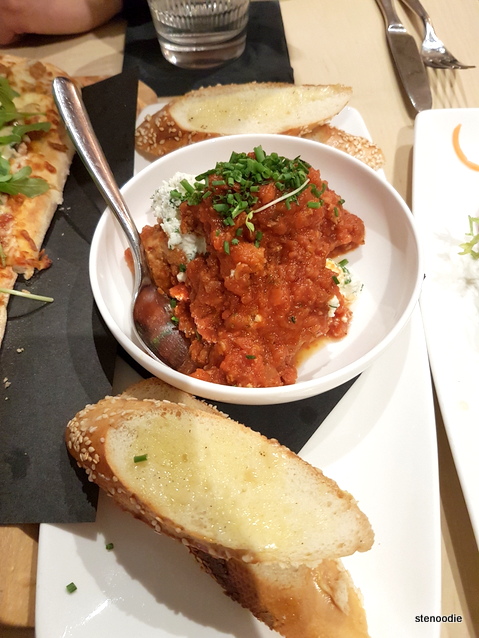 The Hearth Flatbread looked great and was topped with spicy sausage, olives, ricotta, and arugula.  This was pretty good too.  I don’t remember anything bad about it at all. 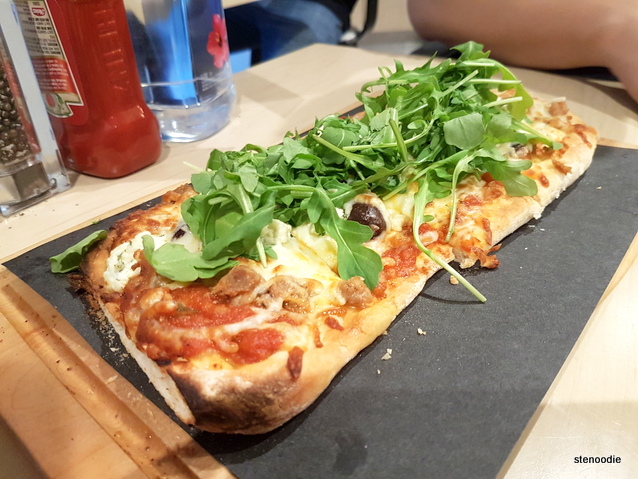 We finished our meal in a comfortable amount of time and didn’t need to rush at all. 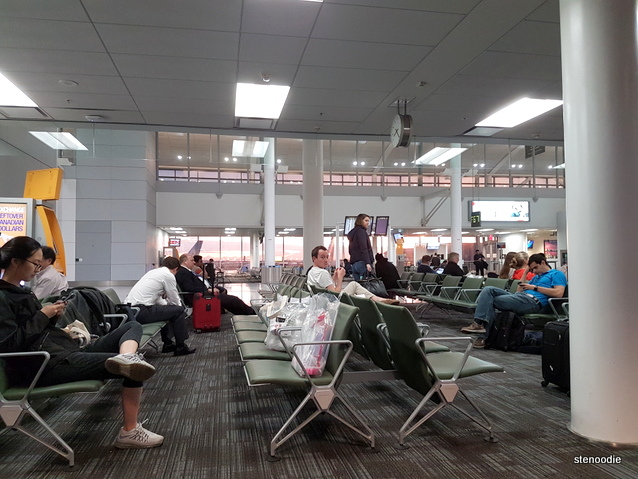 There was a really beautiful pink sunset as we waited. Unfortunately this photo doesn’t capture it well 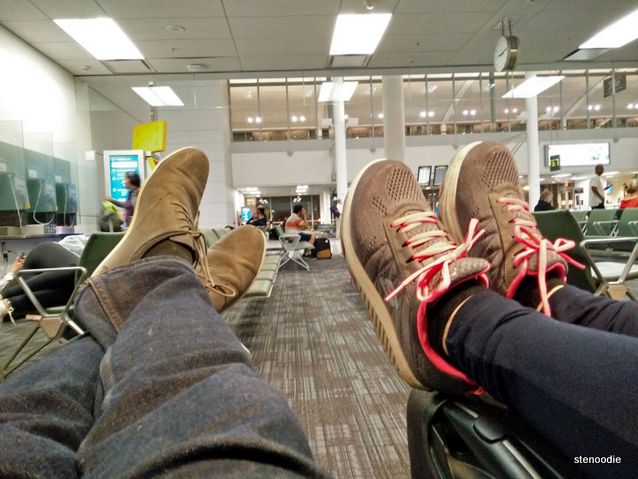 When we were done our dinner, we double checked our gate and headed to it.  Unfortunately, our flight ended up being delayed for an hour so we weren’t able to board at our original time of 8:20 p.m..  Then, it was delayed a second time for a revised boarding time of 10:30 p.m.  The delay was  caused by bad weather in New York and lots of ground traffic at their airport.  And then, it was delayed for a third time until 12 a.m.(!)  We were unlucky that that happened because we actually planned to arrive in New York by 9 p.m. ish and enjoy some midnight snacks before we turned in for the night.  Since the flight was delayed until midnight, we knew that there was no chance of that happening anymore.  However, there was also nothing we could do about it so we waited… and took selfies while we waited lol. 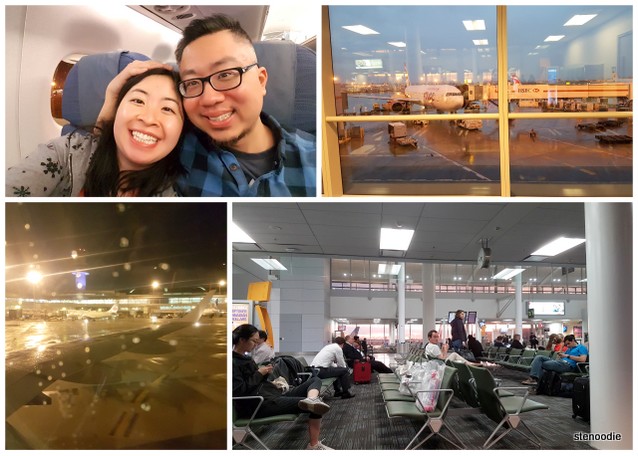 Yay! Finally on the plane!!!

When we did board at 12 a.m., the flight was uneventful and I think I just slept through it.  We arrived at 1:30 a.m. at the LaGuardia Airport in New York City, New York.  Yay!  We successfully arrived finally.

We had some trouble getting the Uber driver at first because there was construction going on at the pick-up area at the airport and thus we actually had to take a shuttle bus to a separate pick-up area where the Uber driver was waiting along with many other drivers and taxi drivers.  We were lucky in the sense that the driver was patient enough to wait for us because we did take a while before we got to the correct area in order for him to pick us up.  Now we know!

The last time I had been to New York was over 20 years ago when I was in grade four or so.  It was a bit surreal to see the New York streets late at night; it was unfamiliar but also exciting at the same time.  We got to our hotel around 3 a.m. and crashed.