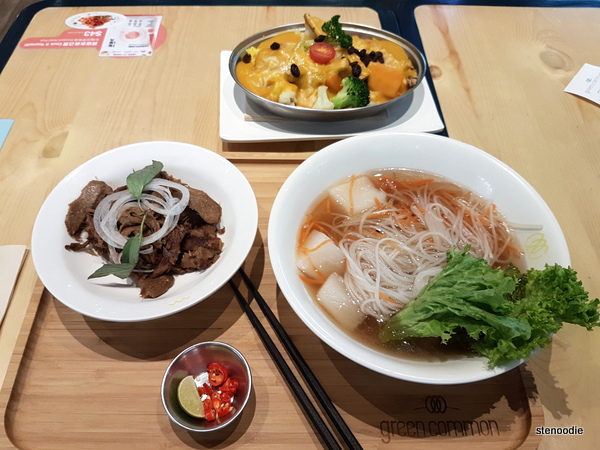 My first vegan restaurant in Hong Kong on this trip!!  I love inventive vegan/vegetarian restaurants where I can increase my intake of veggie consumption while at the same time trying new meatless recipes.

I found Green Common as a recommended vegan restaurant in an online article.  Green Common has several outposts in Hong Kong and this one that I went to was located inside an “upper street” mall called The Forest in Mong Kok (basically, you go up a flight of stairs/escalators and arrive at an indoor mall with shops.  It had a hipstery vibe from even walking into the mall.

It was 6:25 p.m. when we got there.  There didn’t seem to be too many available tables, so even before taking a thorough look at the menu, we nabbed a seat first. I later found out there was another section of dine-in tables at the other side where the cashier and goods were. 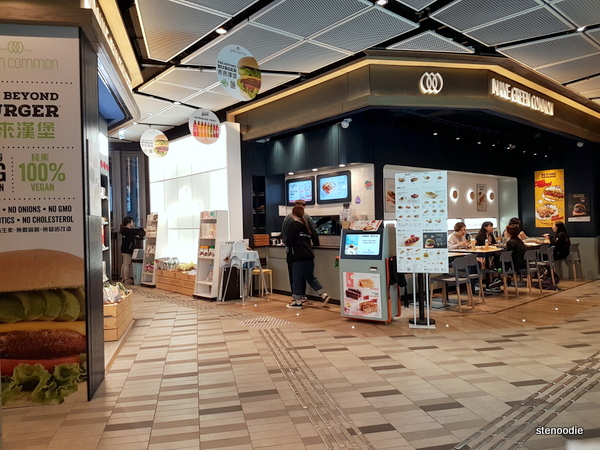 Green Common inside The Forest mall

The menu had a lot of Asian dishes but all veganized!  They had rainbow quinoa bowls, salads, cold press juices, smoothies, the Beyond Meat burger, and lots of Beyond Chicken, Beyond Sausage, Omnipork, and other vegan reincarnations of meat.  I would definitely need a second visit to try more but on this visit, we ordered the Beef Pho and Portuguese Chicken Rice (all vegan of course). 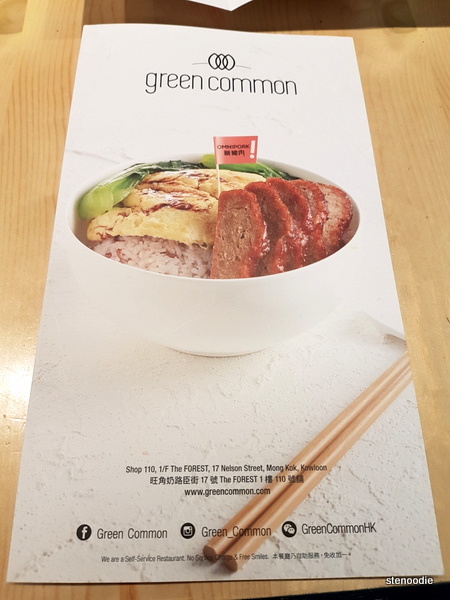 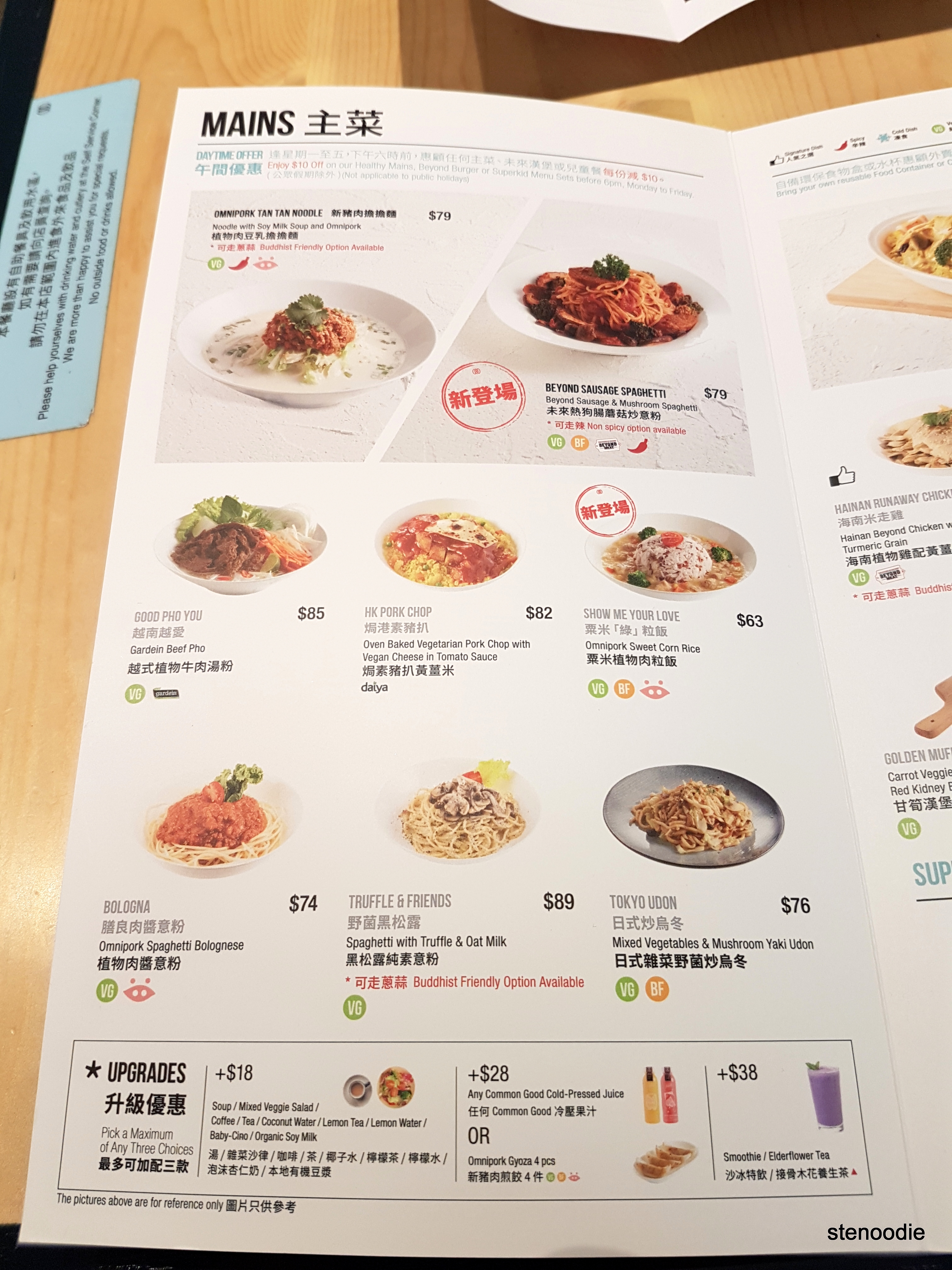 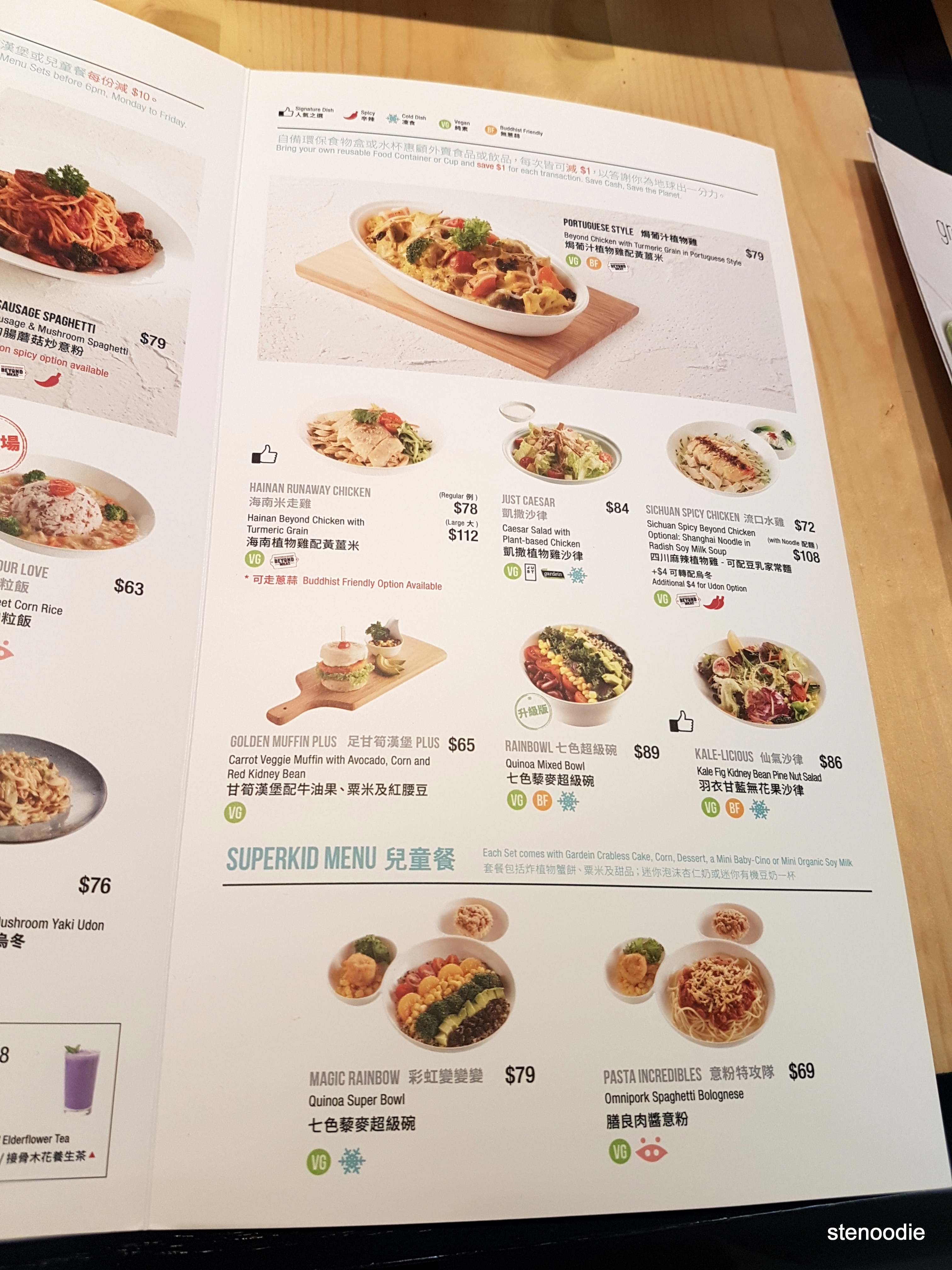 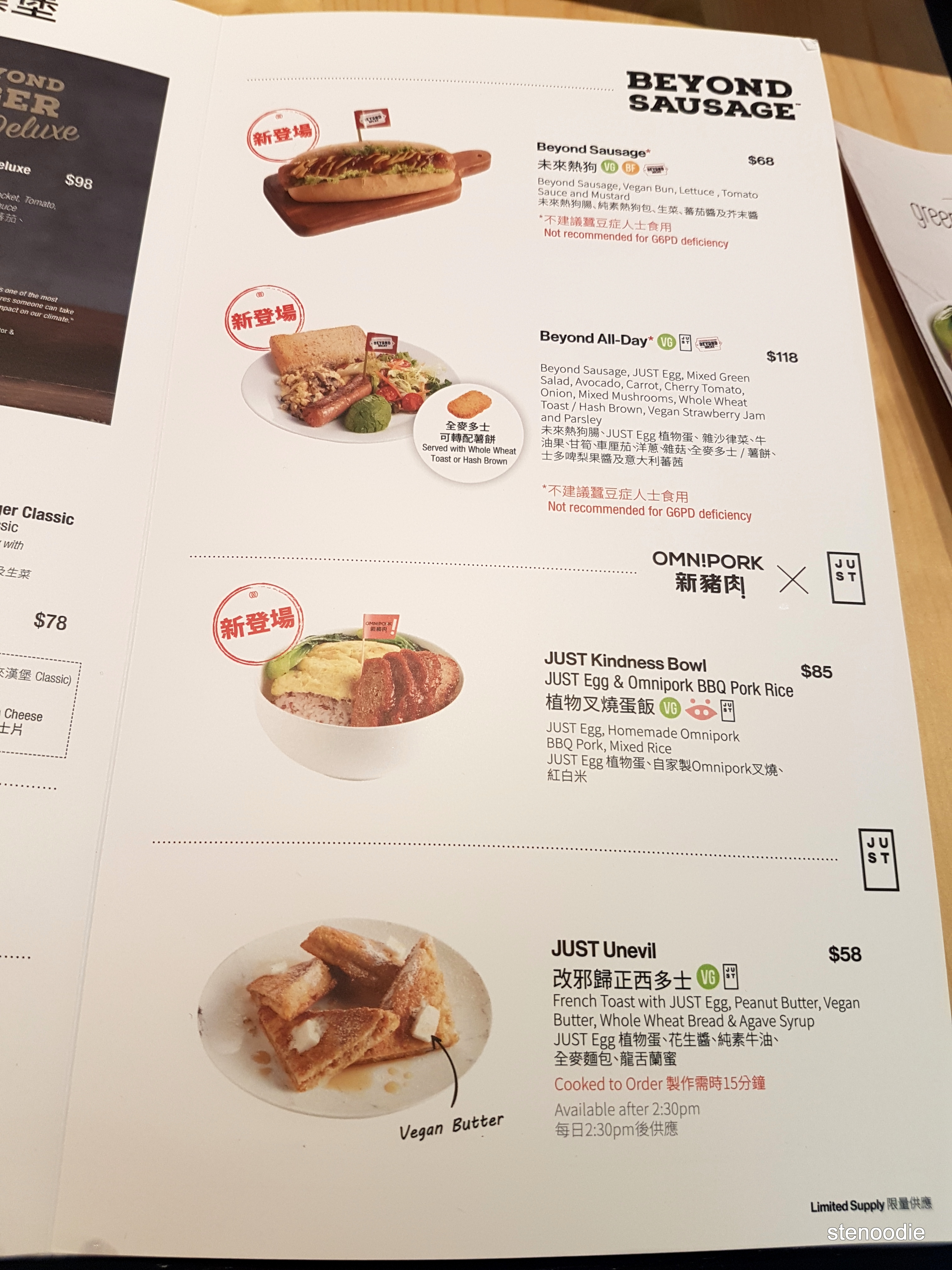 Beyond Sausage and Omnipork options 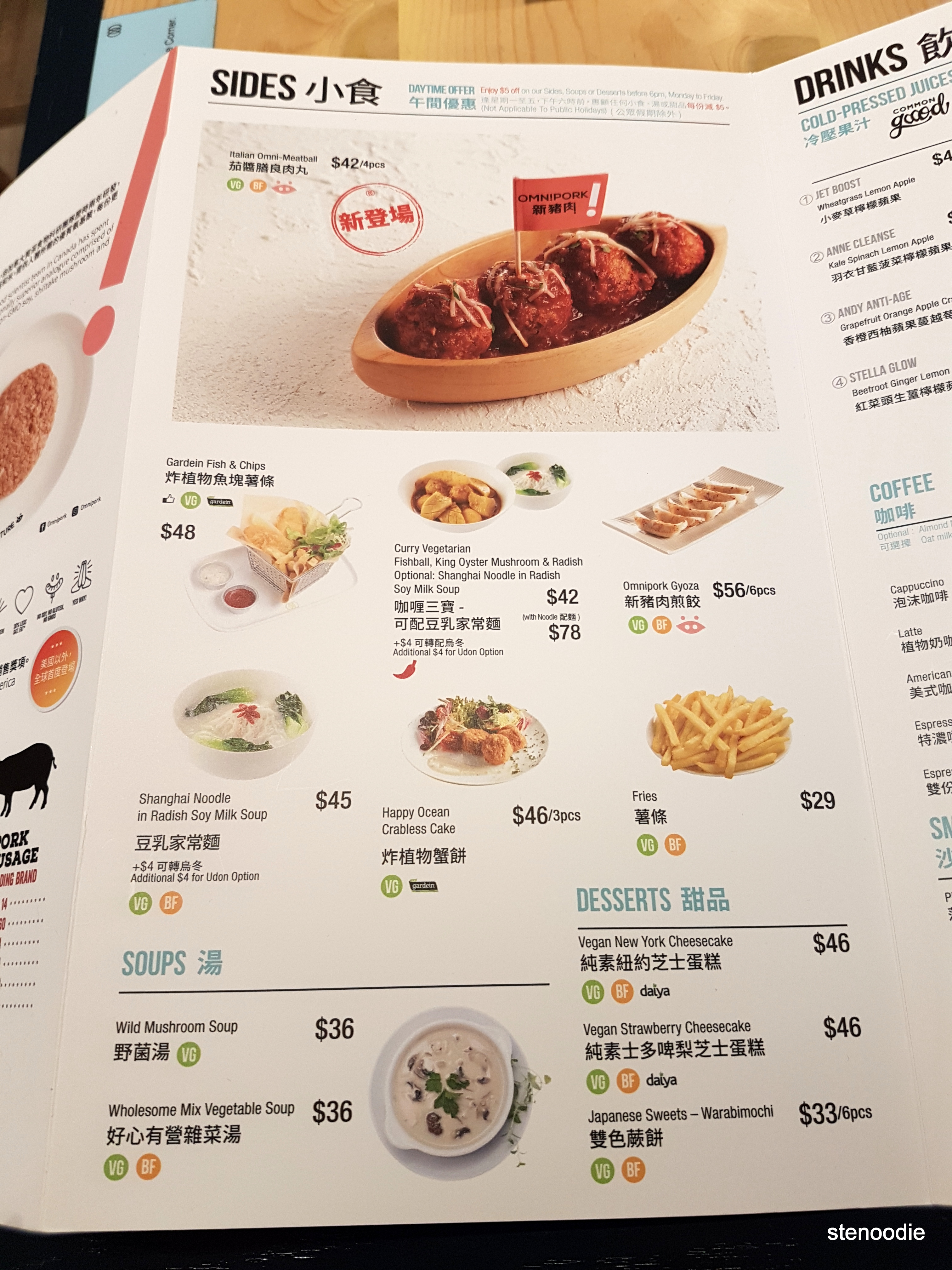 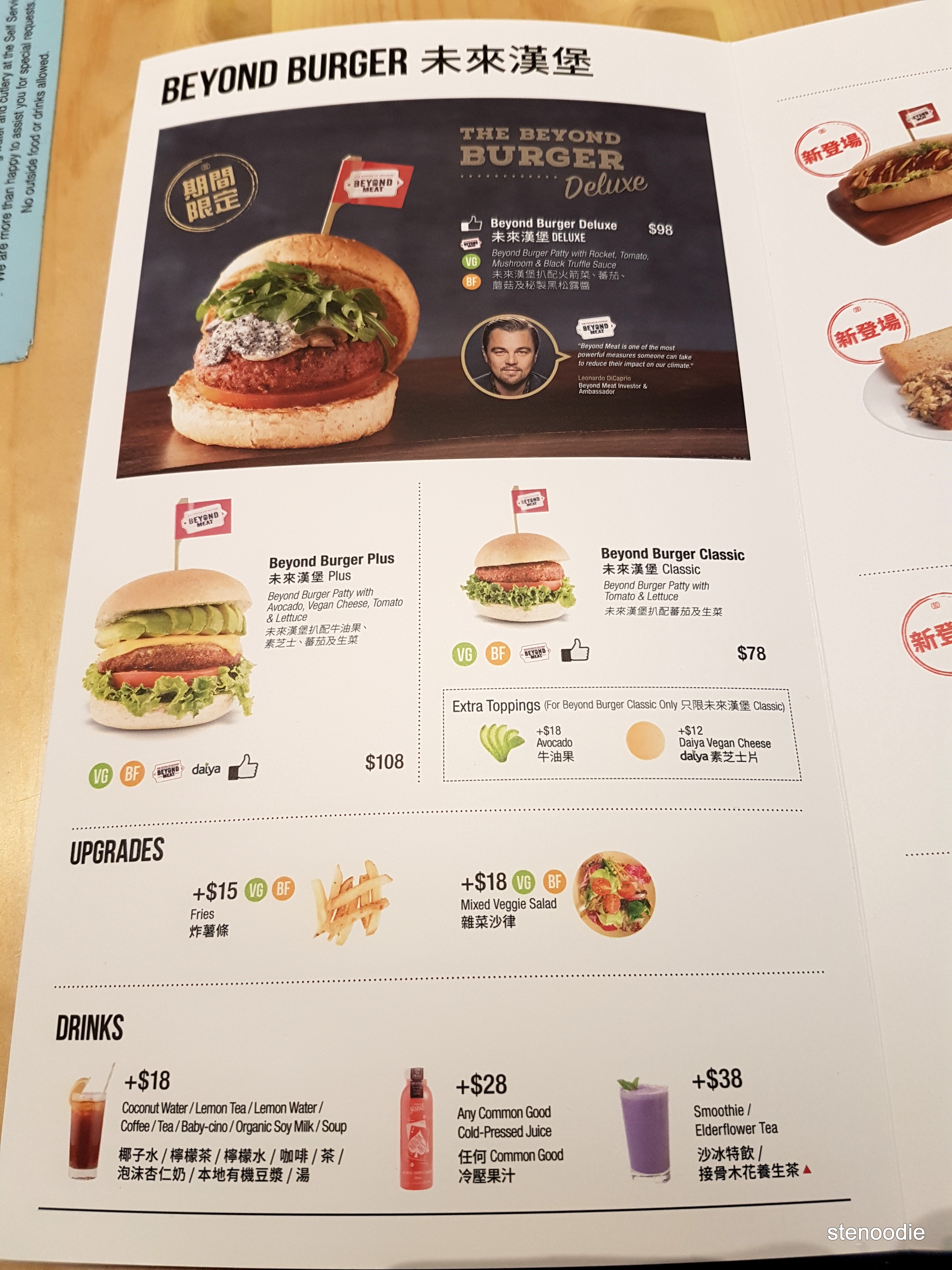 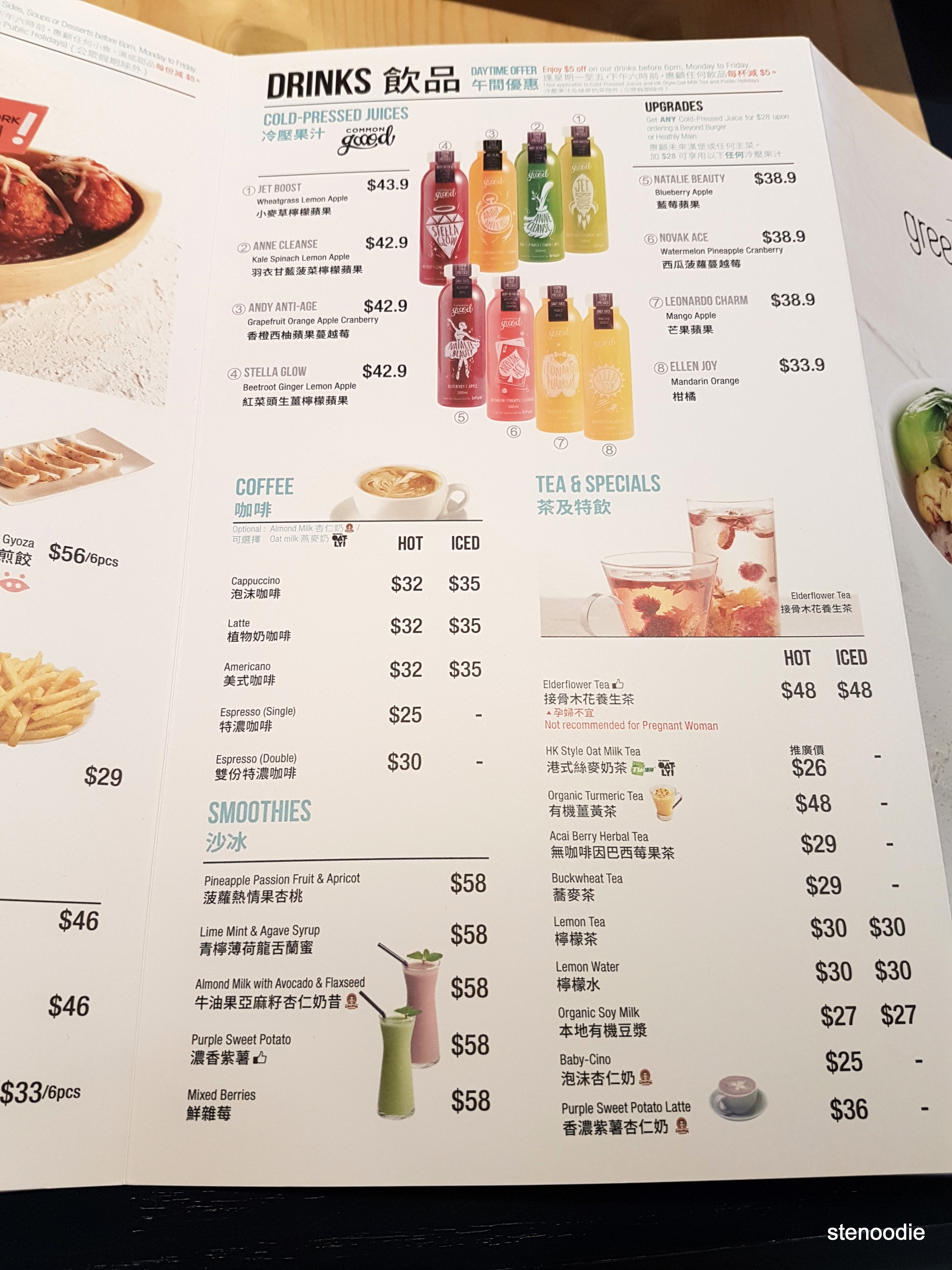 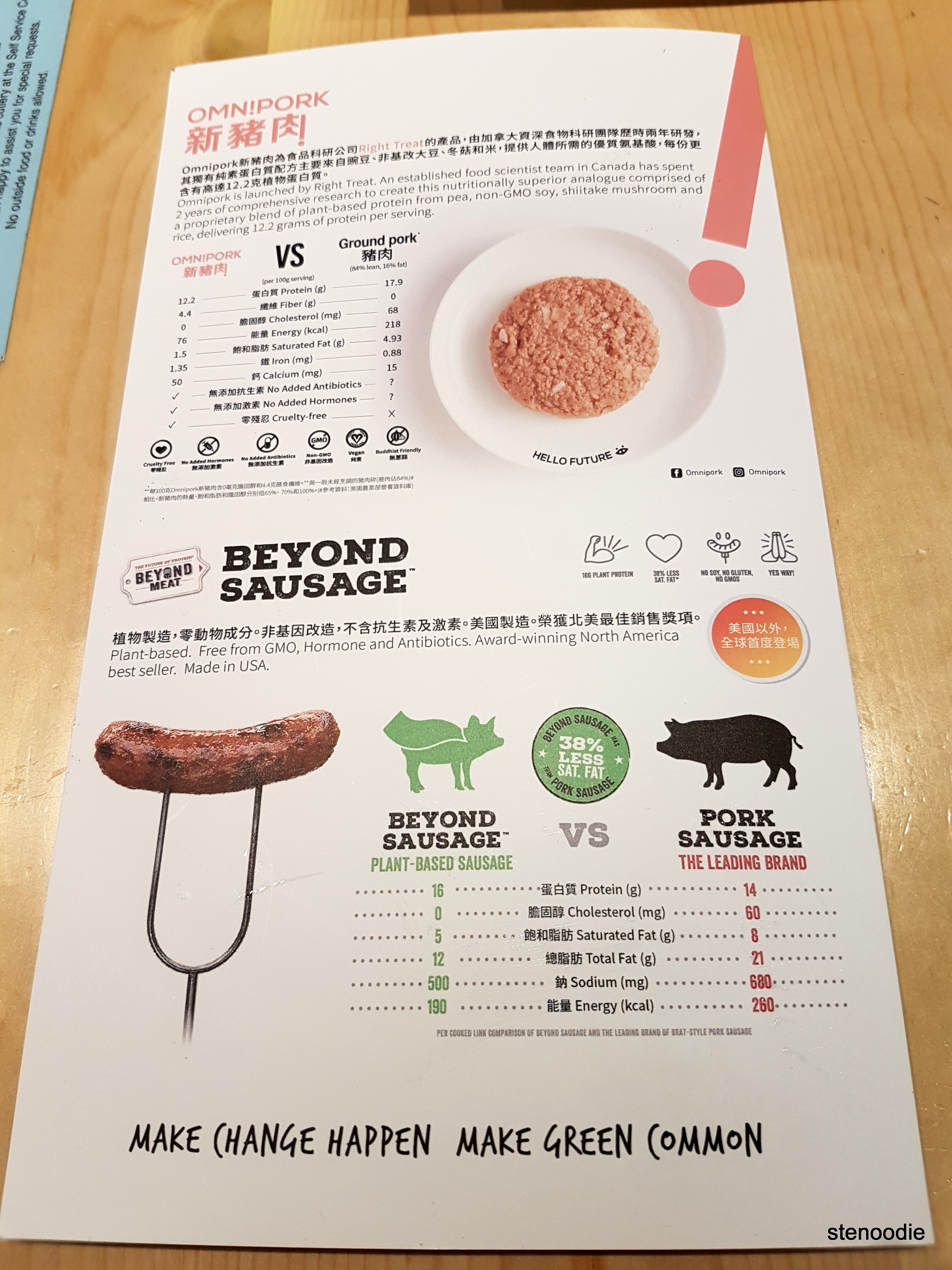 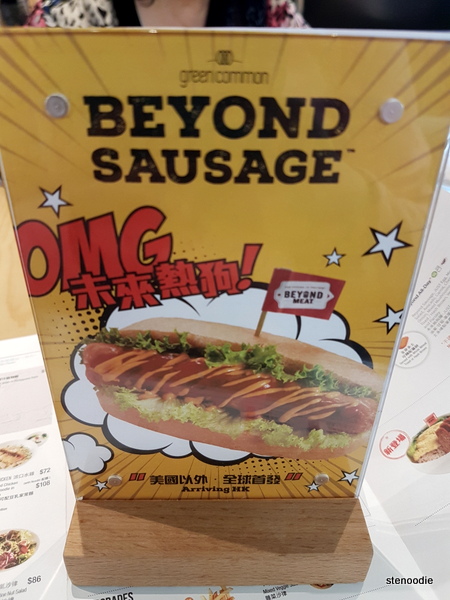 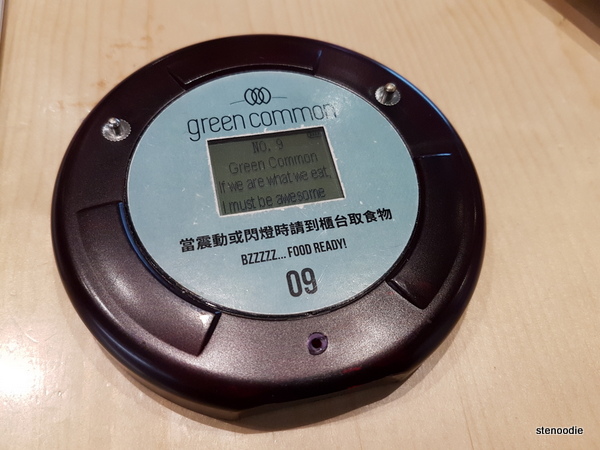 The staff directed me to the cashier to place my order whereupon I received an electronic buzzer.  It was a fast casual system and self-service where the buzzer would alert you to when the food was ready.  You would then take the buzzer to the kitchen counter to retrieve your food.  All of the utensils were at your table in a pull-out cupboard while water and extra bowls were also self-serve.  The only thing the attendants did was take away your finished dishes and trays when you left. 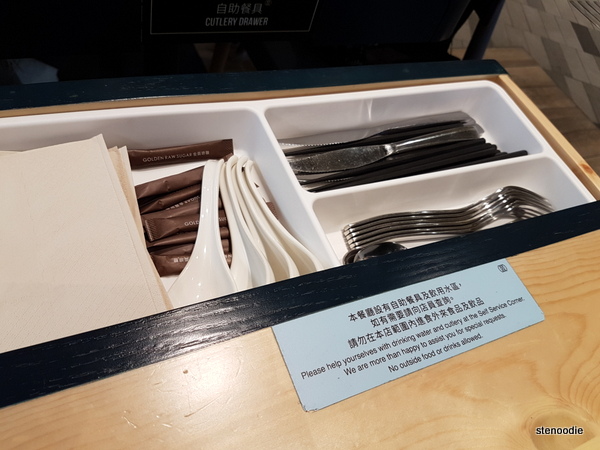 Cutlery in the pull-out drawer 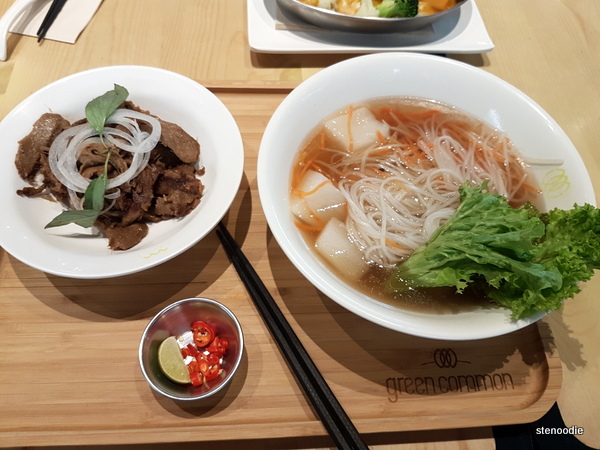 The food took a reasonable amount of time to arrive.  The “Good Pho You” Gardein Beef Pho arrived with a hot bowl of rice noodles, shredded carrots in soup.  The “beef” was served in a separate bowl with a few tendrils of onion and two mint leaves.  There was a small metal cup of diced red peppers and a halved lime too.

The “beef” actually was made to look and taste like real beef.  It was really tasty.  There were a lot more beef pieces than I expected, which was good for the value.  The rice noodles were good with the fragrant soup broth too. 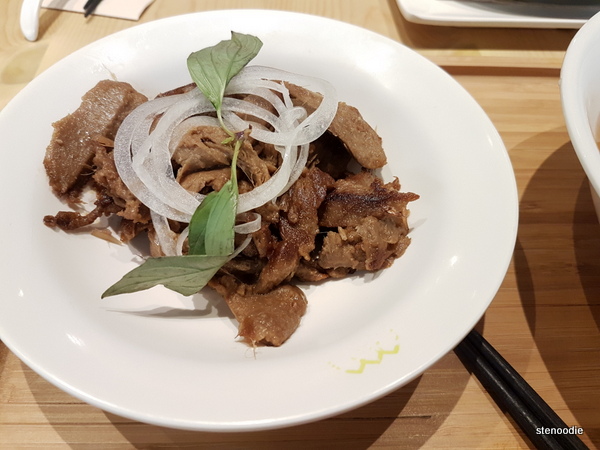 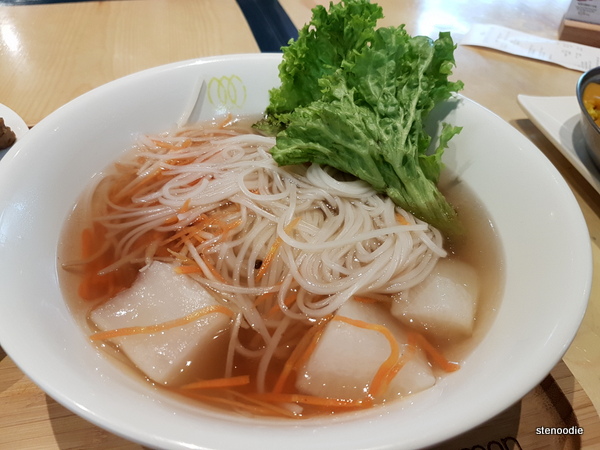 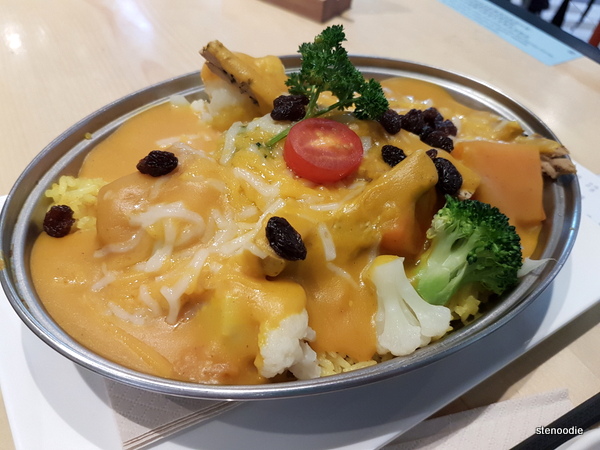 The Portuguese Style Beyond Chicken was baked with tumeric rice (so good for you) with vegan cheese, broccoli, cauliflower, tomatoes, and carrots. This was my first time trying Beyond Chicken and it was really similar in taste and texture to the real thing.  It was sliced in strips for this dish.  I really liked the vegan cheese — gooey and not fatty at all.  The tumeric rice was a highlight too.  I liked how the whole dish screamed comfort food to me — soft grains and tender vegetables.

A lot of patrons came in as the 7 p.m. prime dinner time approached.  One thing I didn’t like about sitting in the open concept mall was how drafty it was.  My food cooled down a lot faster than I wanted it.

When we were done, the attendants cleared our trays.  I went to browse the goods that they had for sale.  It was all vegan goodies like green wasabi peas, Chinese mushrooms for gift giving, Chinese new year cakes all in vegan style, and more.  When browsing their refrigerator section, I spotted the Daiya yogurt that I had seen a vegan friend post about on her Facebook.  I was eager to try, especially since this dessert was vegan. 😀 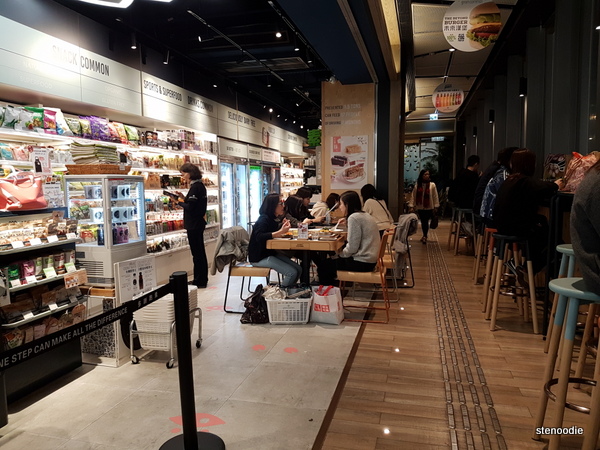 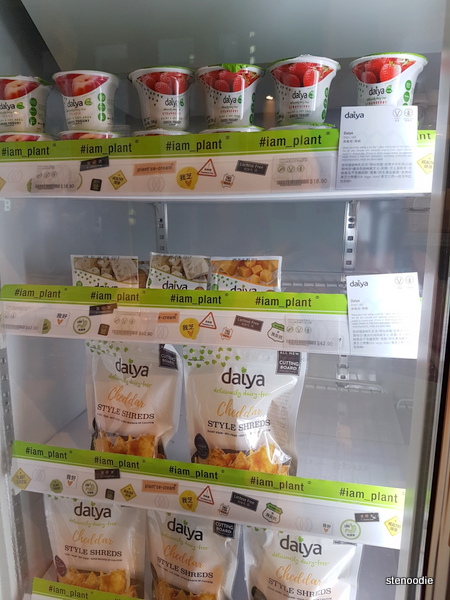 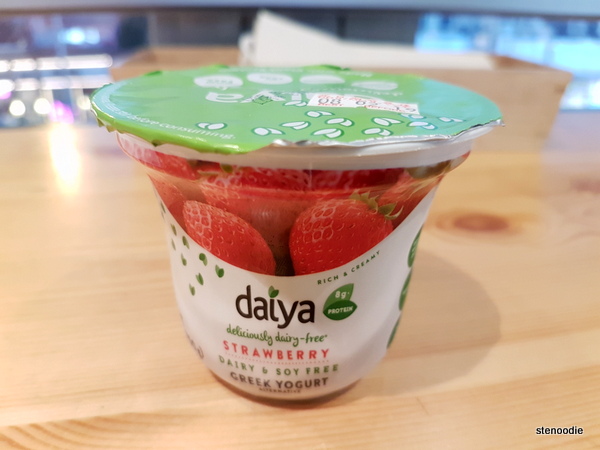 It was a Strawberry dairy and soy free “Greek yogurt” ($18.90 HKD).  It was a small cup.  Upon opening, it appeared as a tan-colour and not like a usual pink tone for strawberry yogurts.  It tasted more dense than usual yogurts and wasn’t too sweet.  This dessert had 8 grams of protein in it too.  I was pleasantly surprised to learn it was a Canadian product based out of Vancouver. 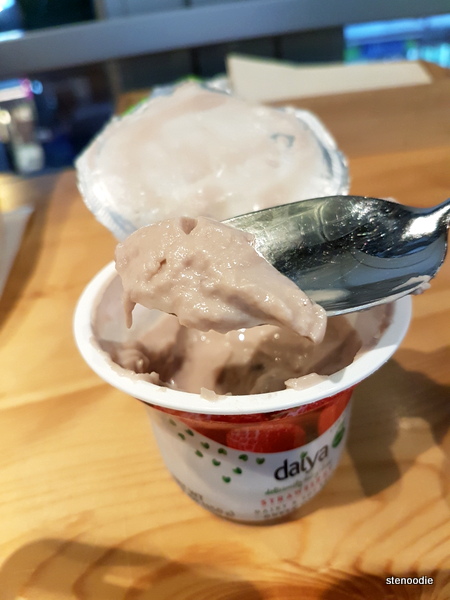 I’d love to return and try their other vegan dishes. 😀 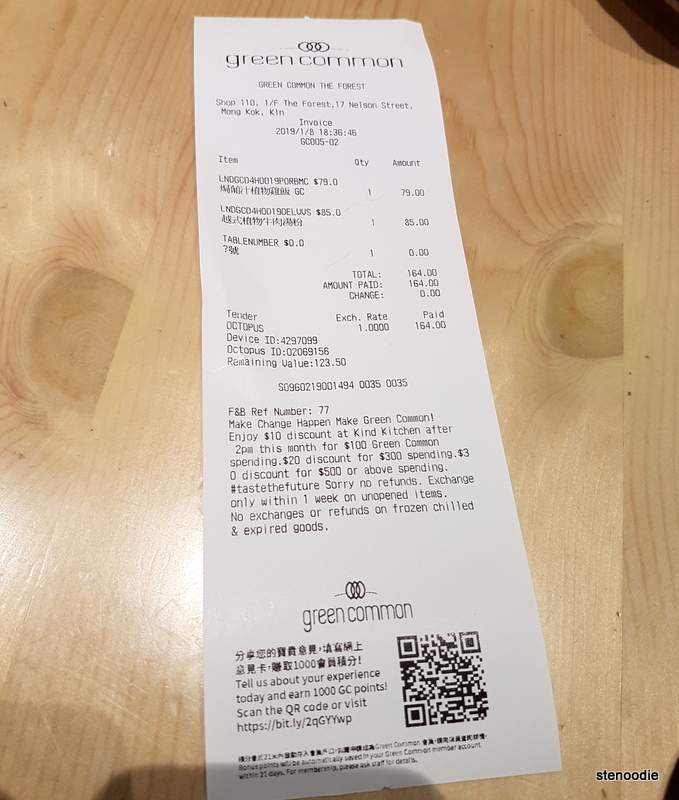