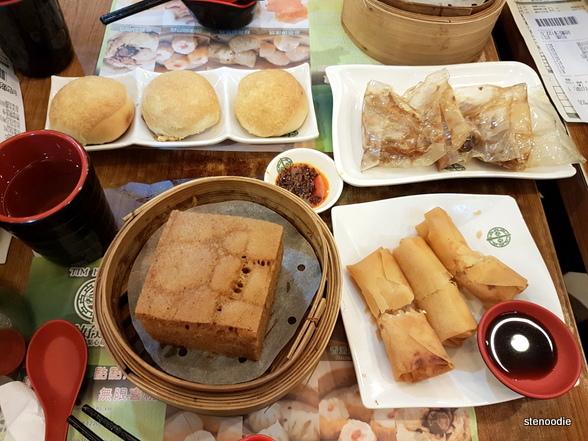 This is what Michelin star dim sum looks like! 😀 Despite having a full western style breakfast at 6:30 a.m. in the morning, my stomach was ready and hungry to try some Michelin starred dim sum at Tim Ho Wan (添好運) at noon.  This is apparently one of the cheapest and most affordable Michelin star restaurants you could eat at in Hong Kong and I was definitely all for it. 😀

We arrived at 12:20 p.m. on a Wednesday and I was fully anticipating a long line-up to get seated at a table.  Much to my surprise and excitement, we didn’t need to wait at all!  After I peeked my head in the door and informed them we were a party of two, we were waved in and seated immediately.  I loved the feeling of not having to wait! 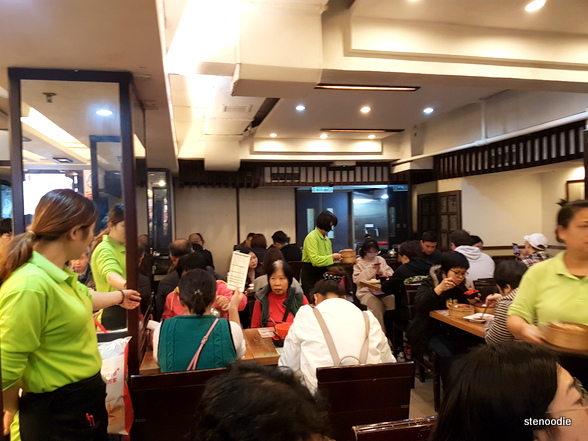 My first impression of Tim Ho Wan was that it was a dumpier looking place than i expected.  It was packed full with tables and chairs in a dimly lit space with servers carrying dim sum orders constantly.  As is common in Hong Kong and with few spaces to use, our two-seater table was right next to another couple.  There was practically no breathing space or privacy for either of us.  I was fine with this though.

The order sheet for dim sum contained a modest number of dim sum, separated by category.  There was no English translation or English menu in sight.  I wondered how the non-Chinese visitors were able to order?  The paper place mat at each seat did show some items pictorially with English, but it wasn’t the full menu translated. 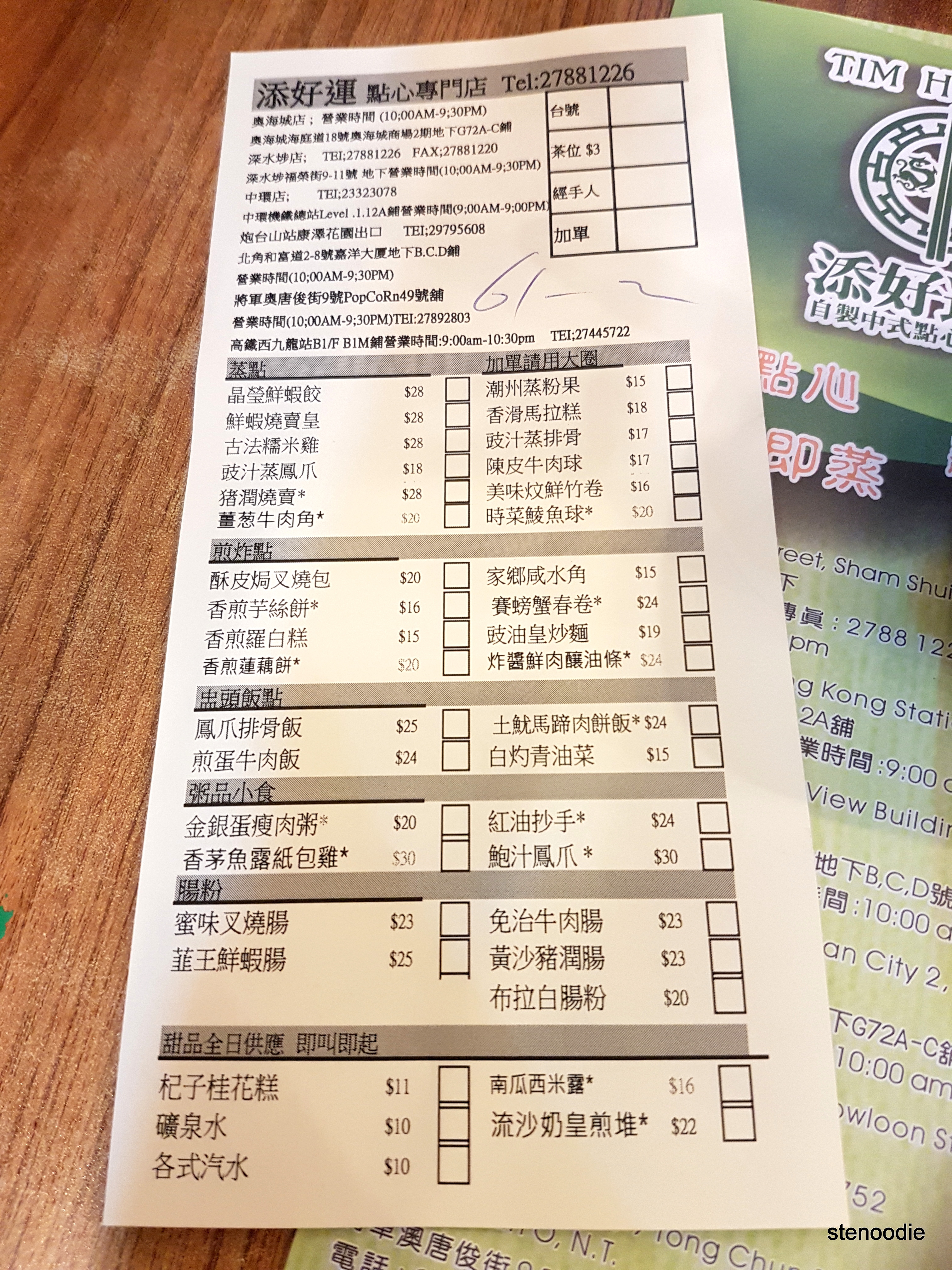 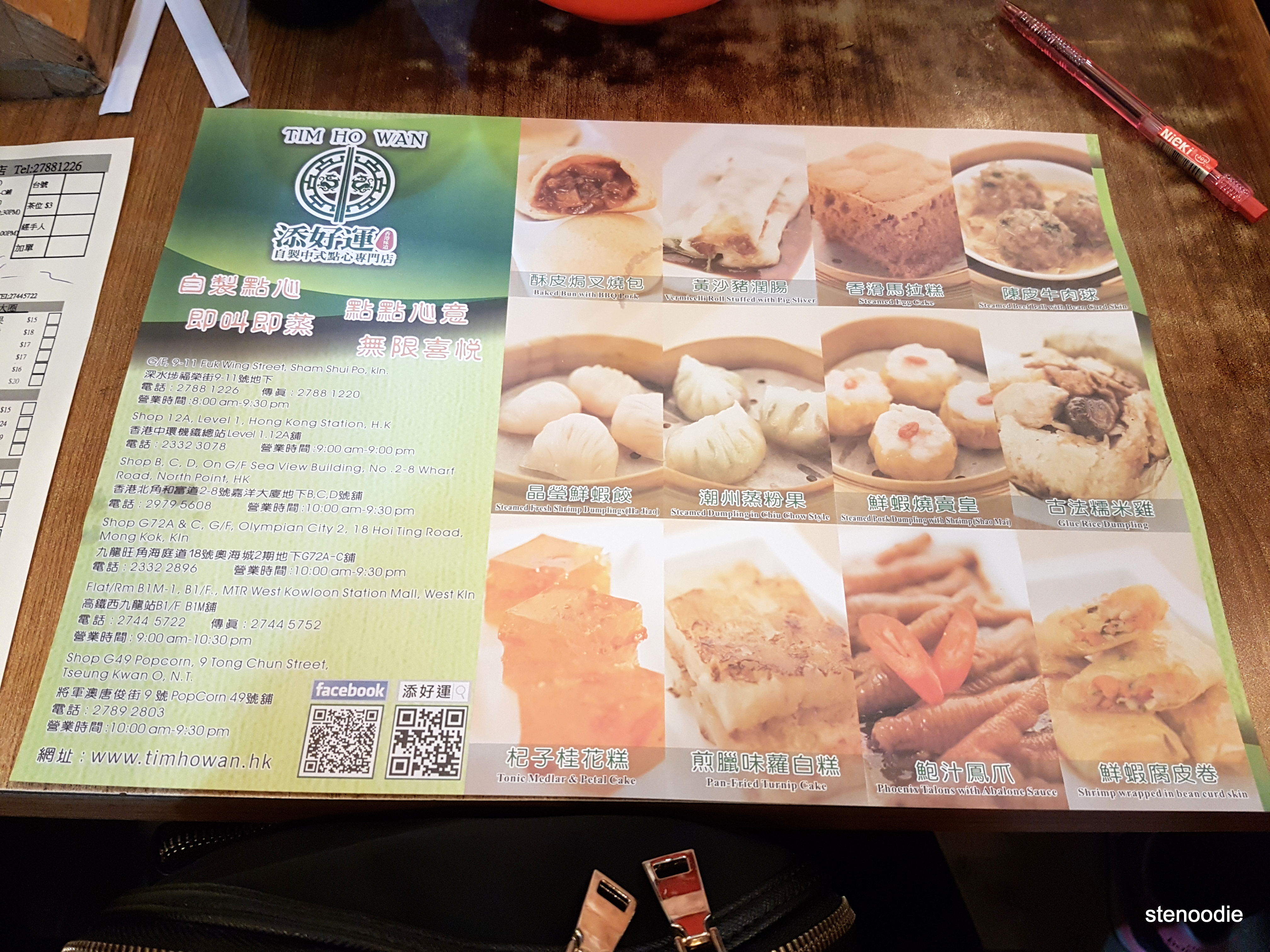 Anyway, we had a big red bowl in the middle of the table.  This was the usual practice for the customer to rinse their own utensils and bowls with the hot tea to further clean them. 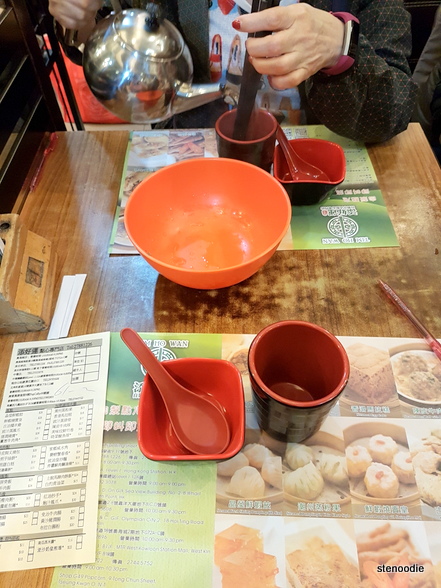 The Steamed Fresh Shrimp Dumplings (晶瑩鮮蝦餃) was the first item into my mouth and I was impressed with it immediately!  The shrimp was smooth and substantial while the dumpling skin was so bouncy and smooth!  It was definitely one of the best shrimp dumplings I’ve ever had! 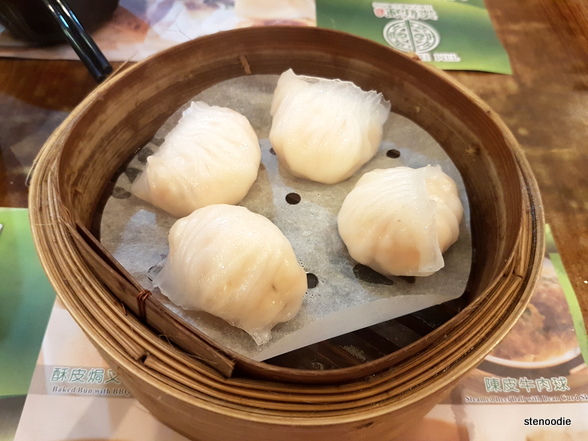 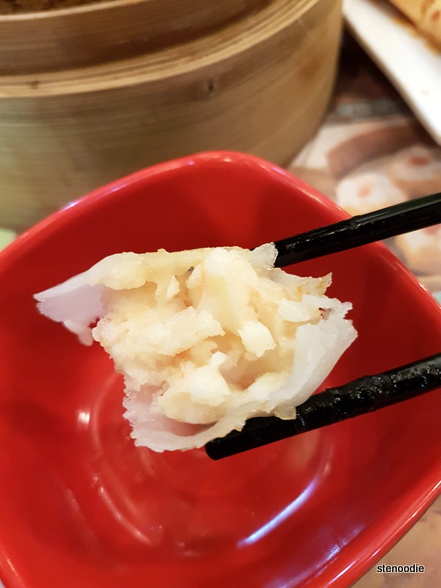 The inside of the shrimp dumpling

The Steamed Egg Cake (香滑馬拉糕) was amazingly soft and fluffy.  It was also a very well done cake.  After the airiness, the sweetness was like honey in your mouth.  This is best eaten hot when it arrives to the table. 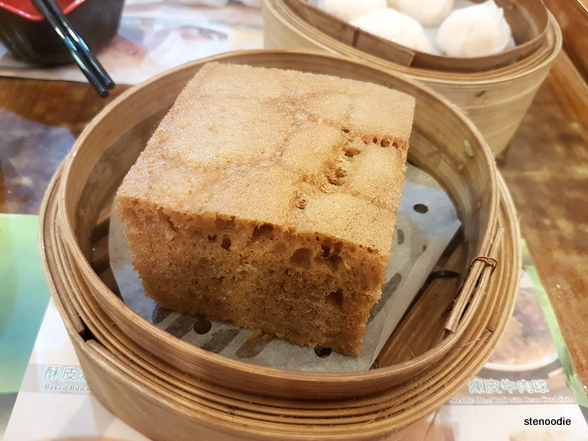 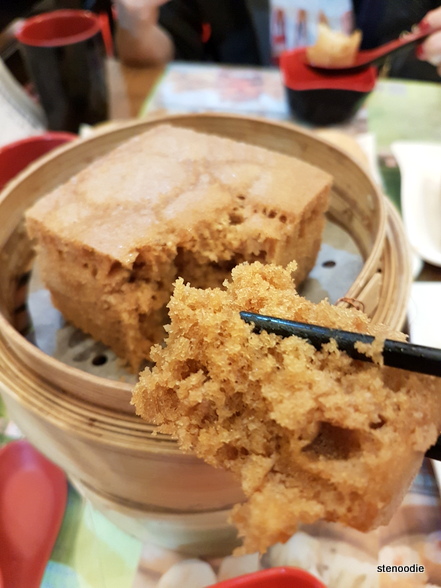 Look at the fluffiness 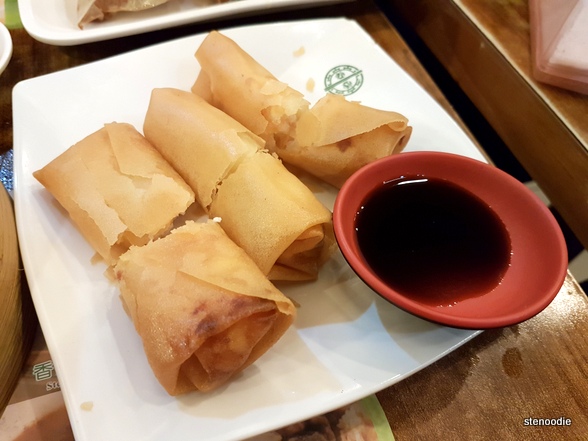 The Deep Fried Spring Roll filled with Egg White & Crab (賽磅蟹春卷) were amazingly crispy!!  I’ve never had spring rolls with this type of crab in it before.  It was so good and each spring roll had a lot of crab in it.  The vinegar was the perfect complement. 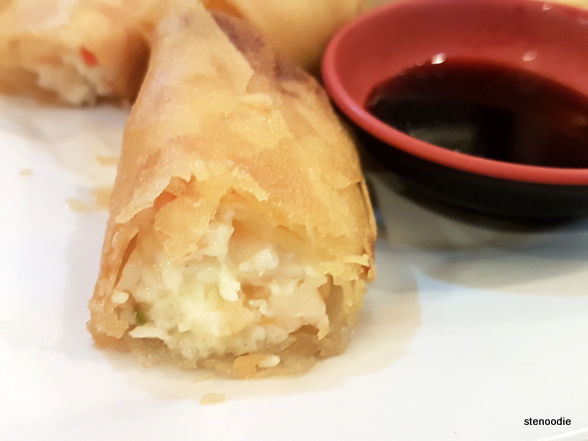 You can see the inside of the crab spring roll

The famous BBQ pork buns!  The Baked Bun with BBQ Pork (酥皮焗叉燒包) arrived in a set of three and smelled amazing.  It was as tasty as I expected.  The bun was slightly crispy, the BBQ pork was meaty and saucy and slightly sweet.  It was hot inside.  Yummy! 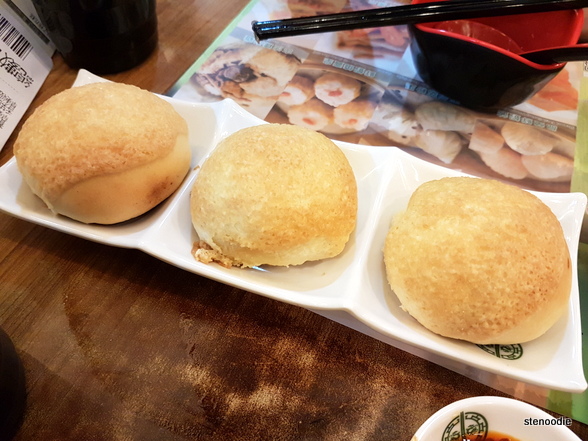 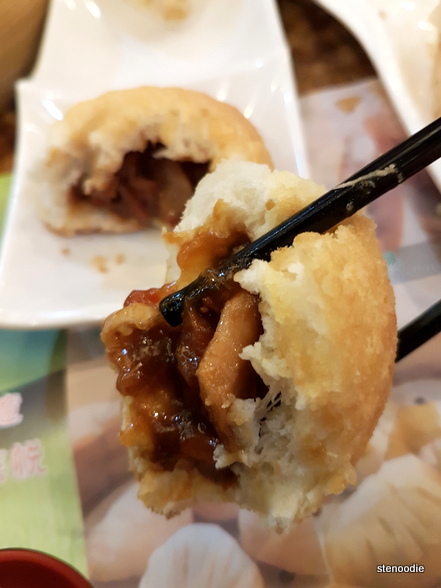 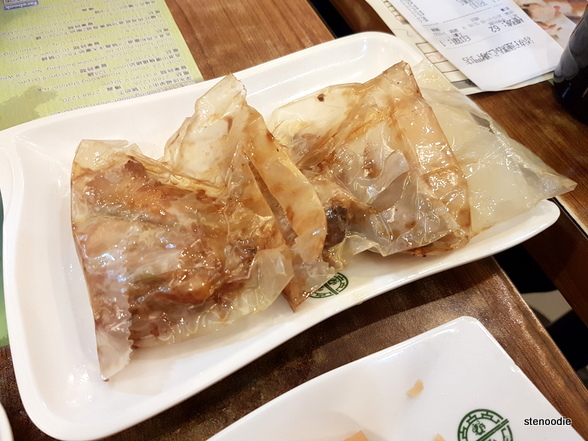 The fried lemongrass chicken in paper (香茅魚露紙包雞) was new to me and something my mom wanted to eat.  It was the traditional way of eating it.  You had to peel away the thin paper to reveal the morsels of chicken inside.  It was cooked with lots of lemongrass, which made it smell so nice.  However, I found that there were bones and too many lemongrass twigs.  I had to constantly pick either one out from the precious meat. 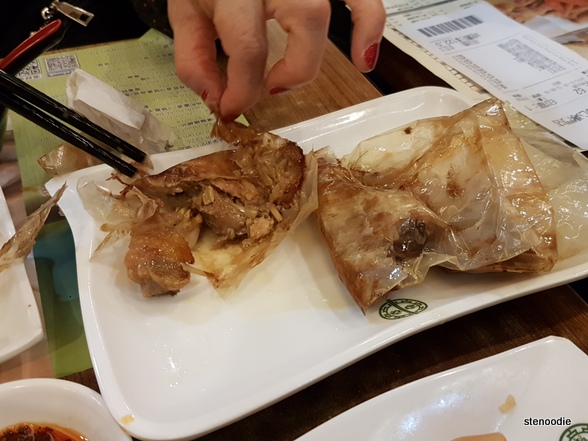 After this, we decided to try a few more items (the glutton in me reared its greedy head).  We had siu mai (kinda classic thing to order), taro cakes, pork liver rice rolls, and dessert cakes. 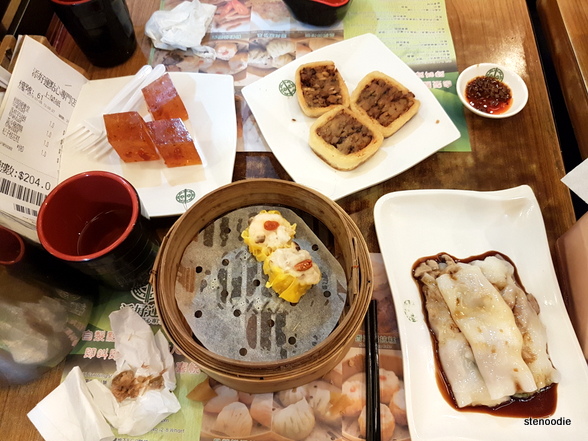 Our second round of dim sum orders

The Fresh Shrimp Siu Mai (鮮蝦燒賣皇) was small and reminiscent of fish siu mai.  It was bouncy and nice.  Since it was fish and shrimp based, it wasn’t heavy or meaty like its pork counterpart. 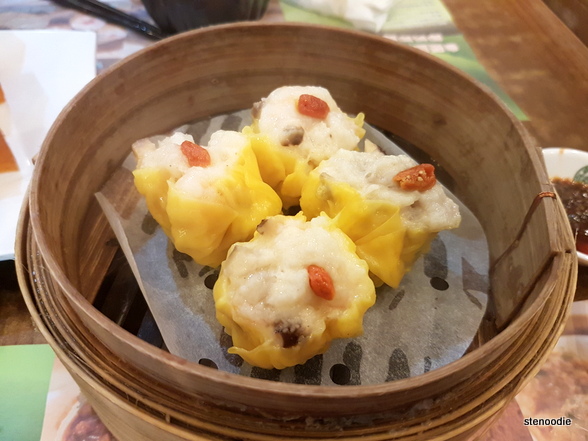 The taro cakes (香煎芋絲餅) came in three and is good to share with a bigger group (especially since we were getting full).  It was also fragrant and crispy.  It was pretty good and unique. 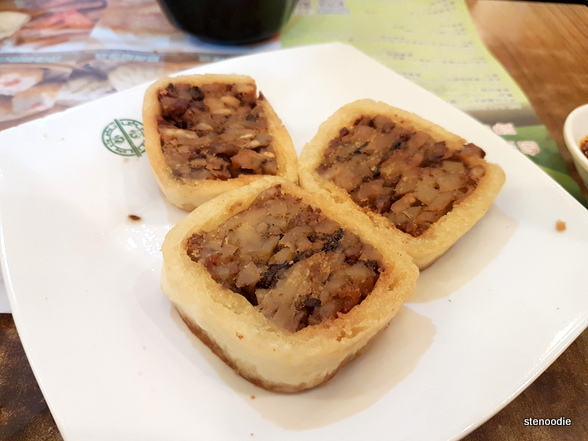 The Rice Roll stuffed with Pig’s Liver (黃沙豬潤腸) had very smooth pork slivers.  It was pretty good.  The rice rolls could have been even silkier for my taste. 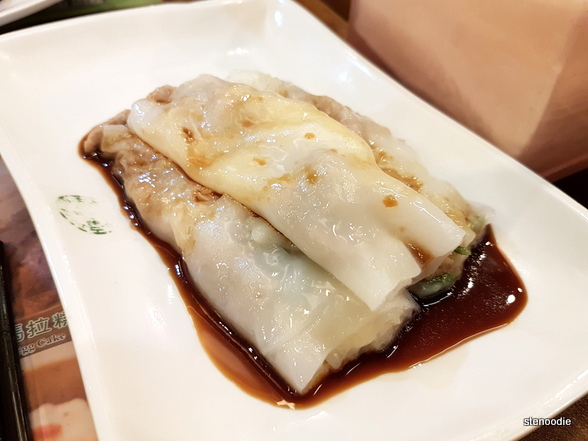 The Tonic Medlar and Petal Cake (杞子桂花糕) was the best one I’ve had to date.  It again smelled so fragrant like flowers and contained so many petals and flowers inside.  It was definitely a fancy flower cake. 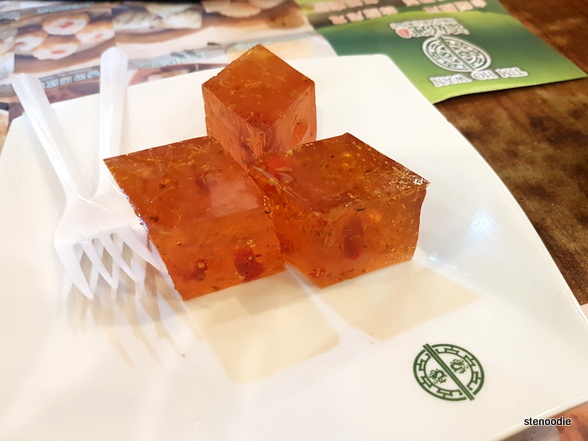 The table next to us had changed occupants three times by the time we left. XD

Overall, I really enjoyed the dim sum experience at Tim Ho Wan.  The servers were prompt with the orders with people constantly ordering so the turnover was high.  The servers made sure empty dishes were cleared quickly too. 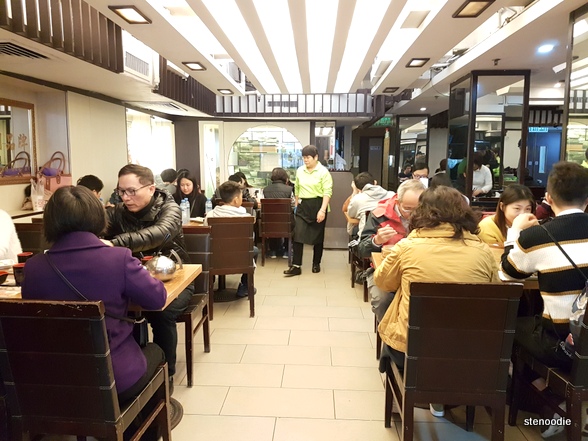 The other side of the room

I’ve tried basically everything I needed to on this visit, but if I were to come again, I’d still be open to try their other dim sum dishes that I didn’t order. 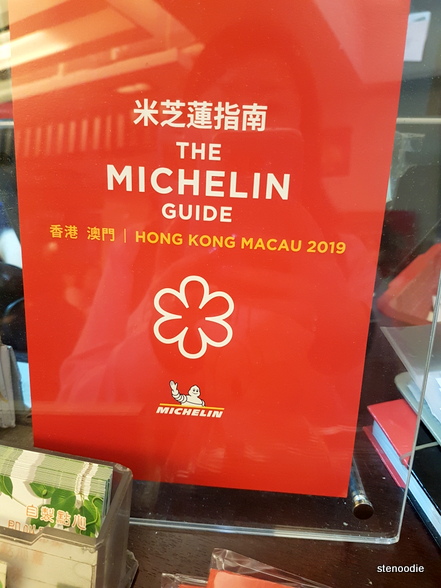 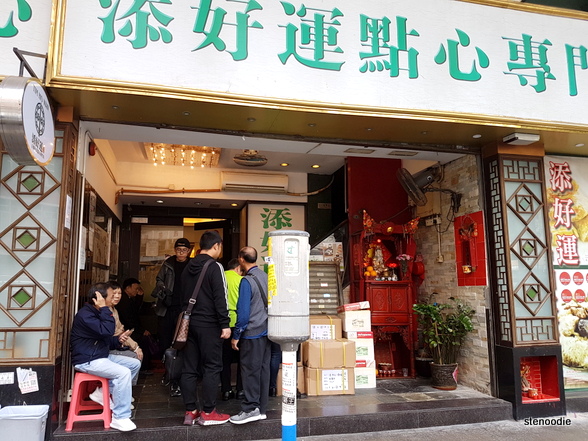 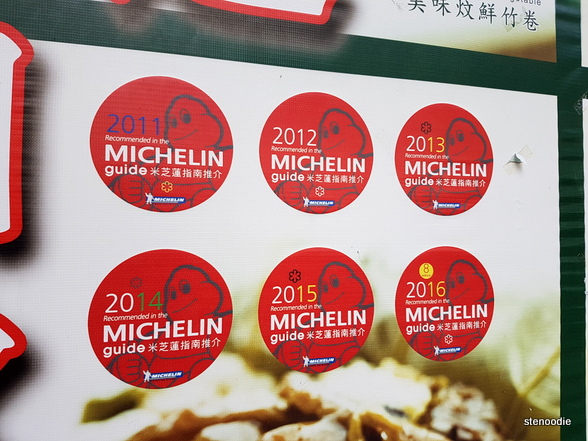 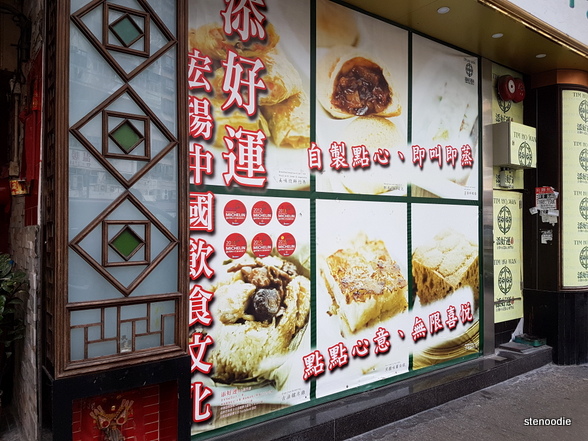 Pictures of dim sum on their wall 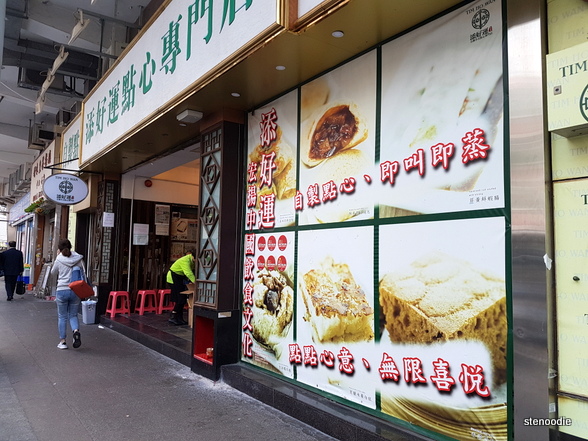