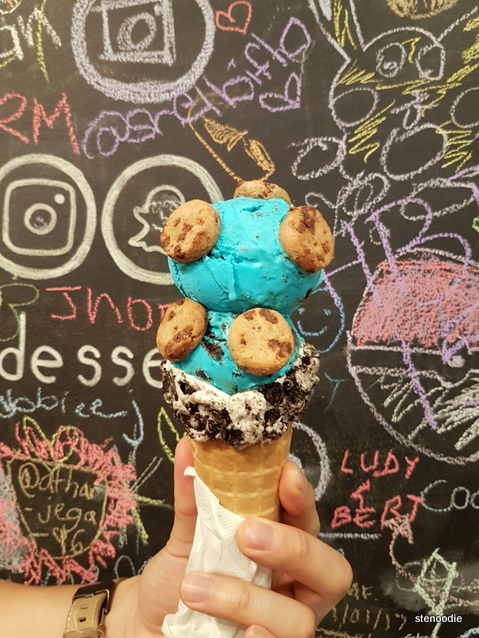 A year after its debut, I finally tried the ice cream from Fugo!  (I had stepped into this store and passed by it when it opened but was either too full from other sweet desserts or wasn’t in the mood for trying it at the time.)  The Cookie Monster Ice Cream from Fugo came to fame a year ago when the blue-dyed cookies and cream ice cream made every foodie on Instagram want to get a cone just to put it on their feed (come on, we all eat #forthegram now, no?).

We arrived just after 9 p.m. on the Canada Day long weekend and as expected, there were a lot of people lining up for ice cream on a nice summer’s day.  I ordered the Cookie Monster ice cream creation (as expected) while Ken ordered the Bangkok Brownie Parfait.

The line moved quickly and after placing my order at the counter, the two ice creams were ready really quickly too!  Considering that there was only one staff manning the cashier and two in the open kitchen behind him, it was a really fast order process! 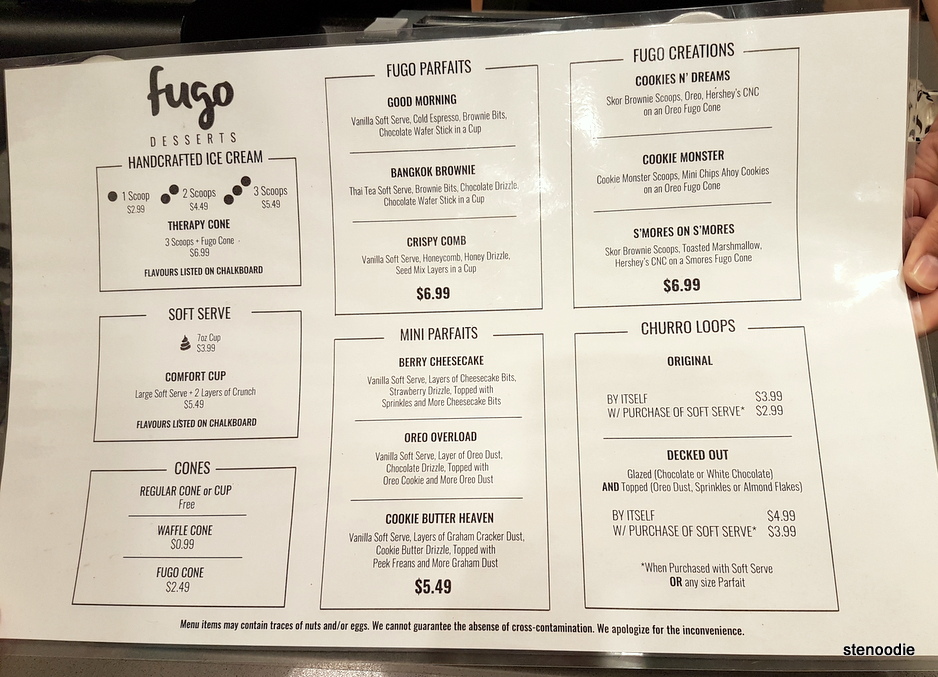 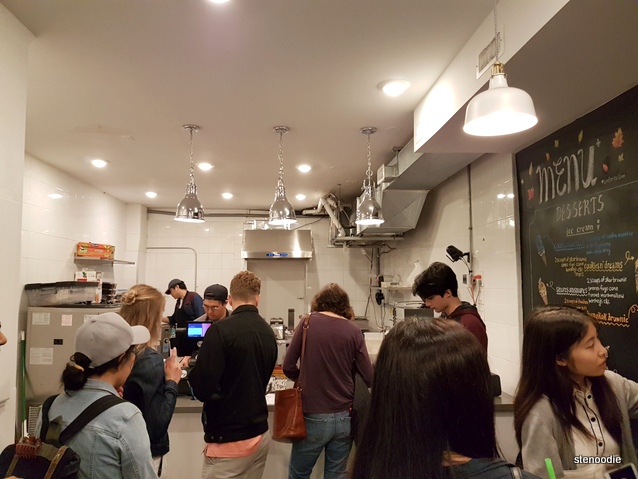 The inside of Fugo Desserts 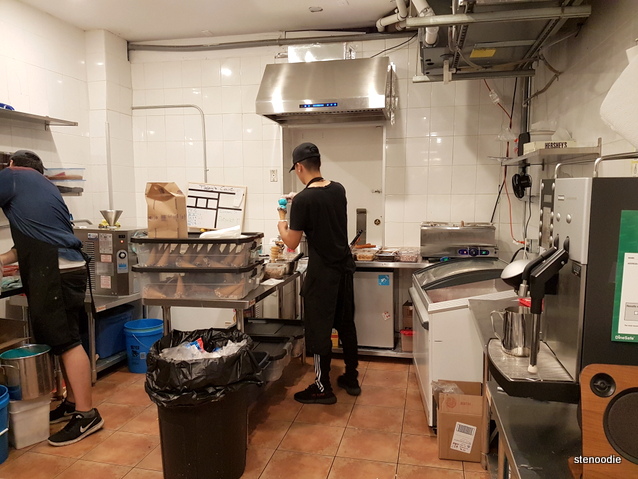 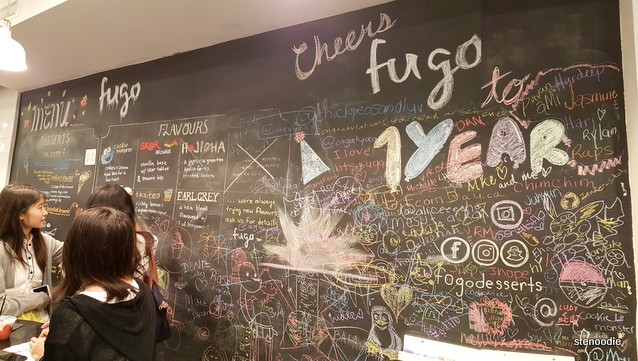 Fugo’s space isn’t big and there are only a handful of tables with stools for you to dine in.  Most people order and then go with their ice cream or parfaits.  At the time of ordering, they also had a brand new creation:  You could put a “churros loop” into your parfait.  It looked pretty cool but we only saw a few people ordering it.  The rest of the other customers ordered the ice cream cones (with the majority of people ordering the blue famed Cookie Monster ice cream cone). 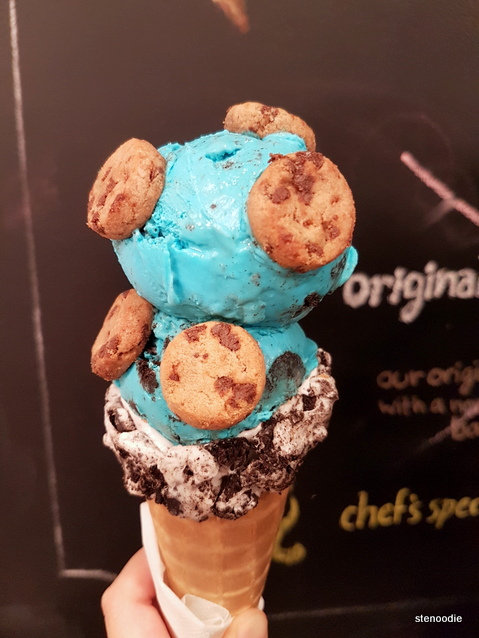 As expected, the Cookie Monster Fugo Creation was highly “instagramable” /photogenic.  Many people like myself took the photo of this dessert creation against their chalkboard wall.  There was chalk available too for you to leave your own comments or messages too.

There were two scoops of the Cookie Monster ice cream and mini Chips Ahoy Cookies all on an Oreo Fugo Cone.  This was a big portion and if it really weren’t for the photo, I could have ordered the one-scoop version.  Upon trying it, I understood why this was so hyped.  The ice cream not only looked good (and cute), but it tasted really good too!  The cookies and cream ice cream was very good and although it was blue, it’s not like there was any flavour to the “blueness”.  The Chips Ahoy Cookies were a good and yummy addition.  The ice cream didn’t melt too quickly (a bonus!) and when I finally got to the cone part of the ice cream, the Oreo Fugo Cone was really delicious too.  The Oreo pieces were stuck onto the cone with something that tasted like sweet marshmallows.  After eating this, I’m sure I had a bit of a sugar high. XD 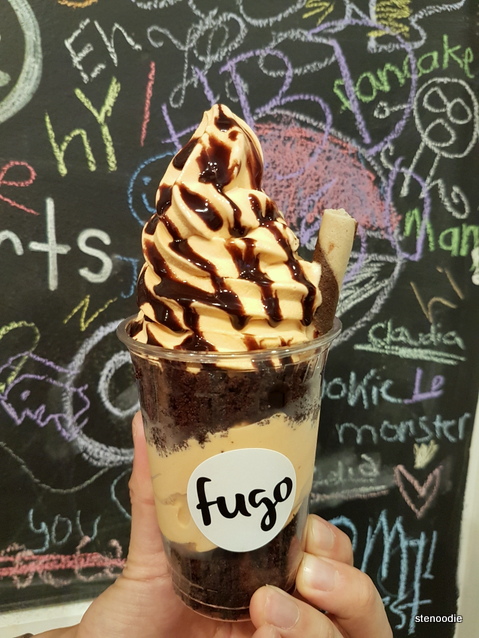 The Bangkok Brownie Parfait that Ken ordered consisted of Thai tea soft serve, brownie bits, chocolate drizzle, and chocolate wafer stick.  When tasting it, it had a very strong and loud Thai tea flavour.  I was impressed with that!  However, I don’t drink or eat tea-flavoured things a lot these days due to its caffeine so a bite to taste was more than enough for me.  I tasted the brownie bits too and was so satisfied with it too.  Yummy! 😀

I’m so glad that I got to finally try the famed ice cream creations from Fugo! 😀  It’s nice to see that they are still doing so well a year into their launch and the Cookie Monster ice cream is still just as popular as ever.  The only thing I would say is that their desserts aren’t cheap.  One ice cream creation or parfait was $6.99 and that’s before tax.  That could be a cheap meal somewhere. XD 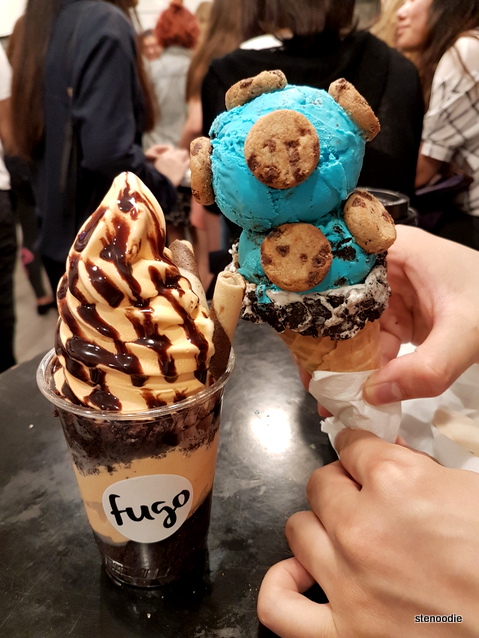 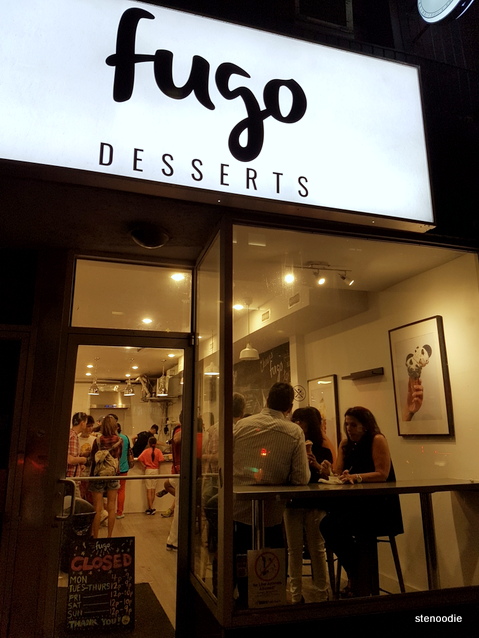