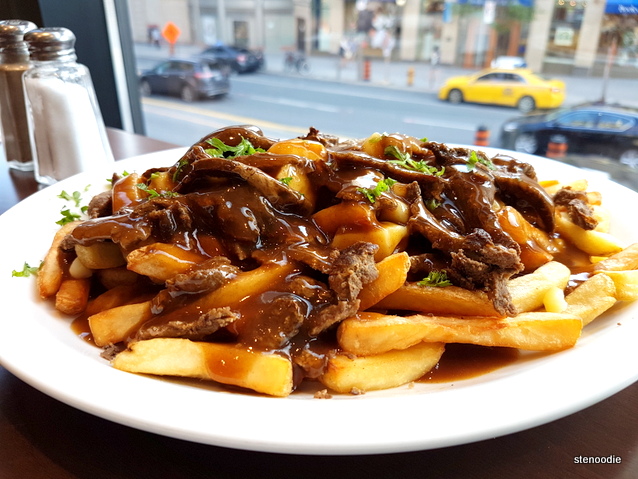 Thanks to Liquid Communications, I was once more invited to Paramount Fine Foods to partake in a private tasting for myself and a guest to try out their food and help them promote their menu.  This time, the goal of the tasting was to promote their new summer items.  The tasting was held at their Yonge and Eglinton location, one of many Paramount Fine Foods locations all across the GTA.

Clarissa and I entered the restaurant just after 5:30 p.m. where we were led to the upstairs dining room of the restaurant (the location of this Paramount Fine Foods was incredibly convenient; once you exit the North side of the Eglinton exit — you do have to follow the signs to walk through the mall first — the restaurant was located directly across the street of the exit.  What a great location to have this Middle Eastern cuisine restaurant! 🙂 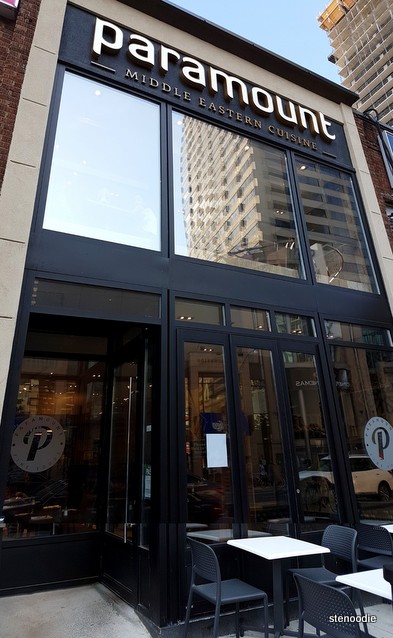 Once upstairs, Amy introduced herself to us and we were welcome to sit anywhere we liked.  Since the tasting event was slated for 5 to 7 p.m., a lot of the other food bloggers and food instagrammers didn’t arrive until the 6 p.m. mark (after they got off work, I was assuming).

Clarissa already had prior commitments after 7 p.m. so we were committed to ordering quickly and maximizing our stay to enjoying the food that Paramount Fine Foods had to offer us.

We immediately knew that we were going to try their Shawarma Poutine and the Whole Chicken dish since those two were on their new summer menu.  We also picked a few classic items and drinks too.  However, when we tried to place our order, the server actually informed us that they didn’t have the Whole Chicken summer item for us.  We found it a bit odd because we were there to try out their new summer menu (of which the Whole Chicken dish was part of) and yet it wasn’t available for us influencers to try out (how do we help them promote it then?).  (They didn’t have the aforementioned new summer slushies either.) 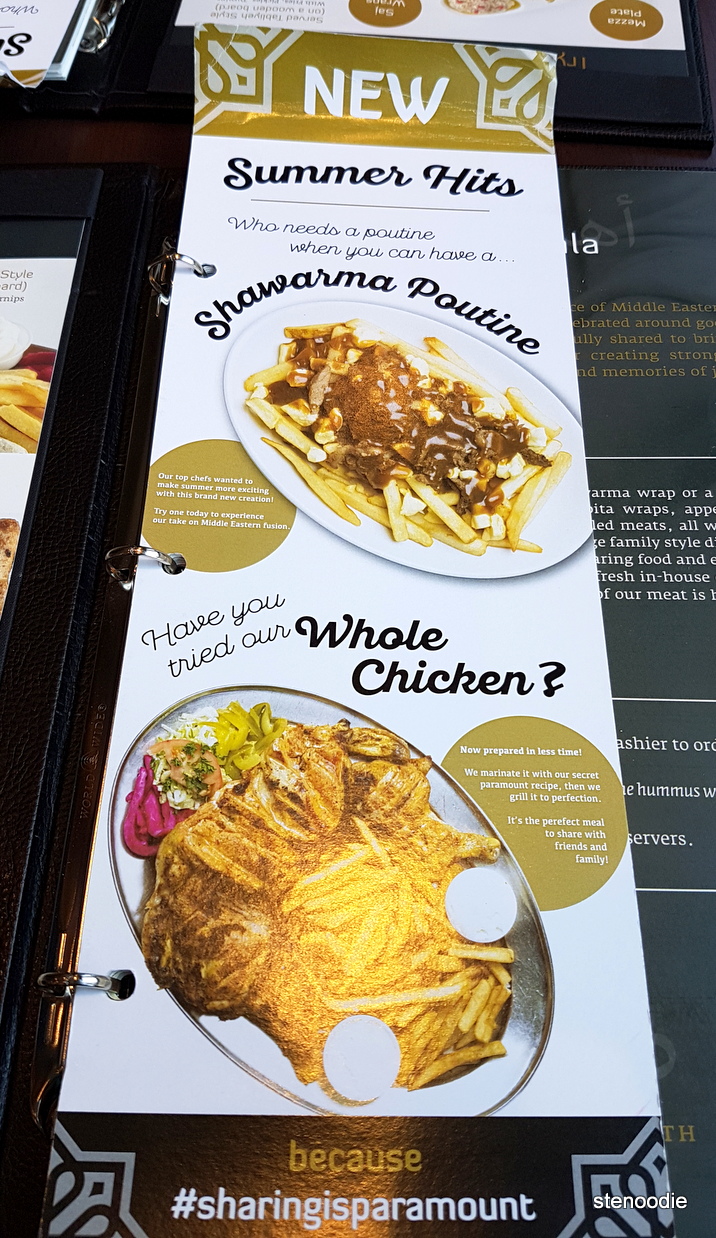 In any case, we were content to switch up our options and ordered the Spinach and Cheese Manakeesh, Grape Leaves, and Mixed Grill Platter in addition to the new Shawarma Poutine (which thankfully was available).

Before that though, we each ordered a drink to try.  Clar got the Paramount Special.  This consisted of layers of fresh strawberry and mango juices and mixed fruits, topped with fresh strawberry, kiwi, pineapple, almonds, crushed pistachio, ashta cream, and honey.  This was a beautiful drink of so many colours and fresh fruits!  It tasted sweet and rich! 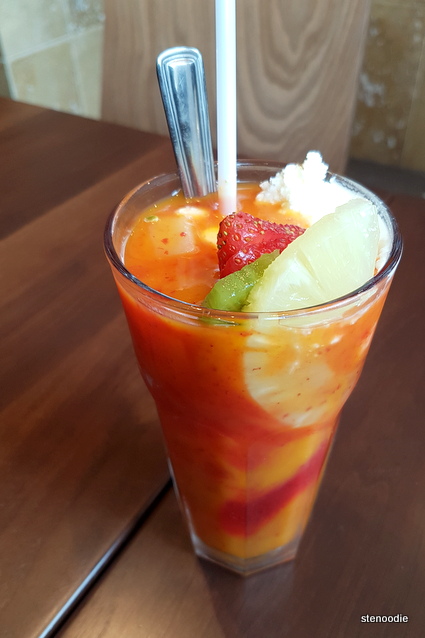 The Jellab drink caught my eye on the drink and I decided to try it.  This was an authentic, refreshingly sweet Middle Eastern drink with the flavour of fruit, rose water, and dates.  I’m really glad I ordered this because this was a gem!  It doesn’t look all that amazing compared to the flashier fruit drinks but this was incredibly refreshing and simple.  It reminded me of a Middle Eastern version of those sweet-tasting Chinese herb drinks.  I loved this and Clar found it so refreshing and delicious as well.  It was a great start to our meal! 🙂 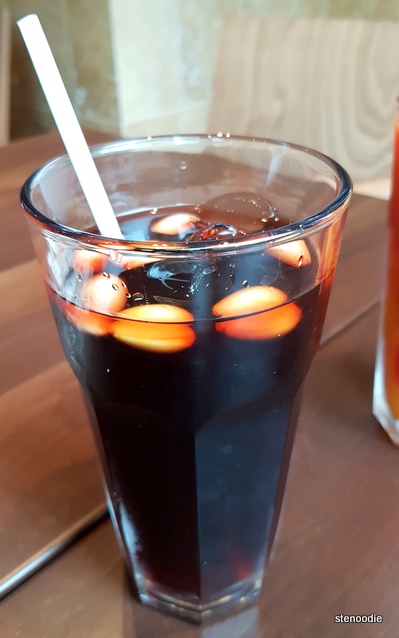 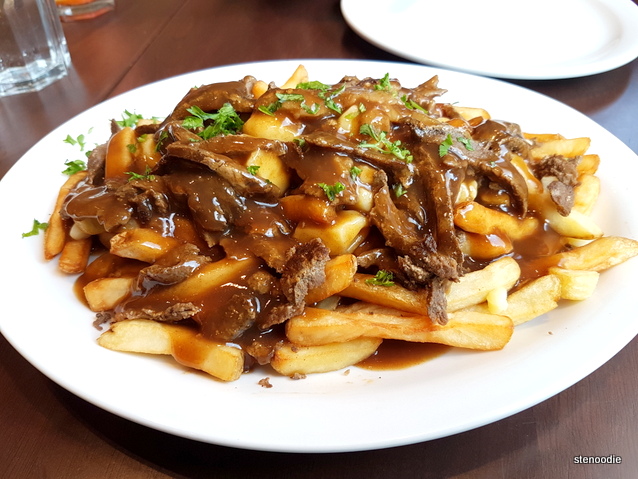 To begin with, the Shawarma Poutine arrived first.  This was as appetizing and delightful as the menu described it to be.  As part of the continuing 150th birthday celebrations in Canada and Paramount Fine Foods’ own 10th anniversary, Paramount crafted this twist on a Canadian staple, poutine, with its Middle Eastern counterpart, shawarma.  It was a huge portion and definitely shareable.  It was a delicious Shawarma Poutine indeed!  What I loved particularly about it was that the gravy was rich and flavourful (the only way gravy should be on any poutine), there were some significant melted cheese curds (so important for poutine), lots of fries, and lots of good shawarma meat.  It was such a perfect combination and delicious!

The Grape Leaves were an appetizer of vine leaves stuffed with rice, tomatoes, parsley, and fresh mint.  I’ve always been fond of grape leaves and found this appetizer to be substantial.  I thought this was so well-made and tasty!  It had the perfect taste of sourness to it too to open up our appetites even more. 😀 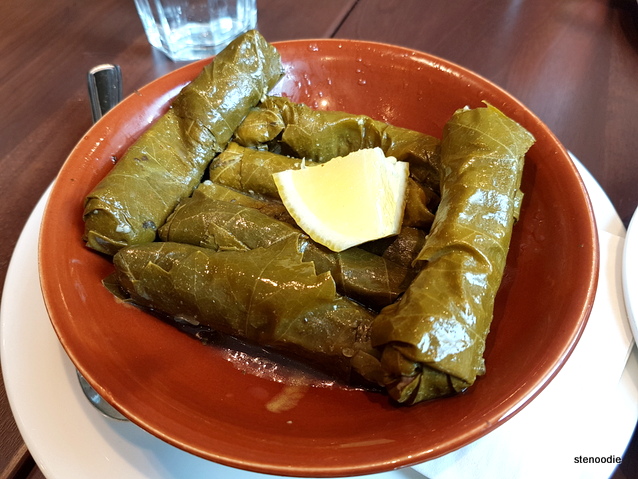 “The word Manakeesh comes from the root verb ‘naqsha’ to sculpt or carve out meaning after the dough has been rolled flat, it is pressed by the fingertips to create little dips for the toppings to lie on.” 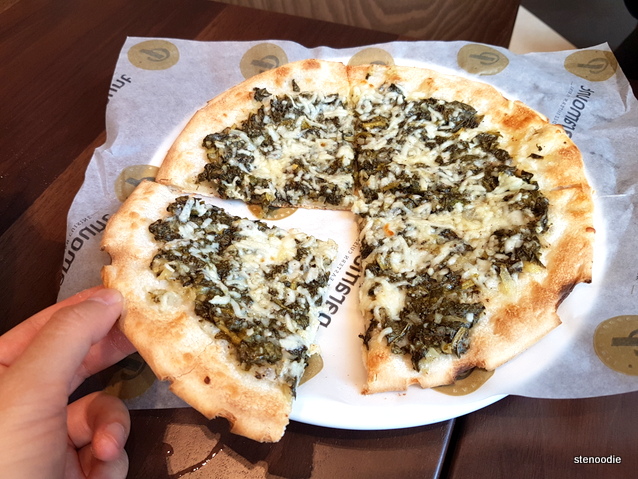 This Manakeesh turned out to be a bigger portion than I expected (I think it was because the first time I had them at the grand opening at the Don Mills location, they were giving out bite-sized Manakeesh and I incorrectly assumed that their usual size were the small ones).  Anyway, it smelled amazing and it was definitely edible like a pizza.  I used my hands to eat it (is that the right way to eat it?).

The Spinach with Cheese Manakeesh had spinach mixed with onions, sumac, and was topped with melted Accawi cheese.  It was delicious!  I liked that it wasn’t too heavy.  The onions and sumac (fruit of a shrub) gave the Manakeesh a lemony flavour that also helped to open up the appetizer for heavier food. 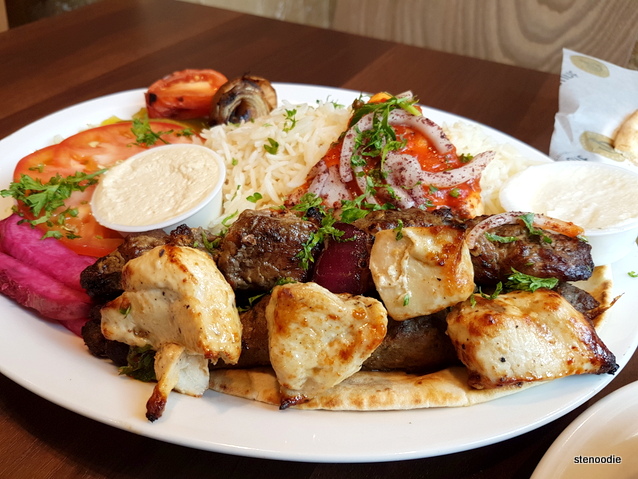 Mixed Grill Platter. $21.99
-grilled skewer of striploin beef, skewer of shish tawouk, two skewers of kafta served with grilled tomatoes, onions, a piece of spicy bread, a side of hummus and garlic sauce

Ordering the Mixed Grill Platter was a smart idea to be able to try a combination of their meats all in one place!  It included a grilled skewer of striploin beef, skewer of shish tawouk, two skewers of kafta served with grilled tomatoes, onions, a piece of spicy bread, and a side of hummus and garlic sauce.

I was really impressed with this Mixed Grill Platter.  It was so delicious!  Everything from the tender and very flavourful striploin beef and shish tawouk to the well-seasoned kafta to the freshly grilled tomatoes to the most delicious hummus and best garlic sauce (that had a bit of a kick to it).  This was a winning plate of goodies all in one plate!  The hot pita was also available on our table to go with the mixed grill platter.  The rice was also a good pairing with all the meats and salad! 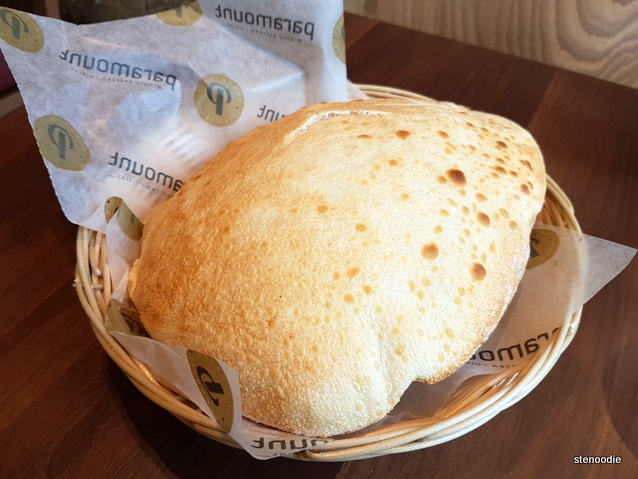 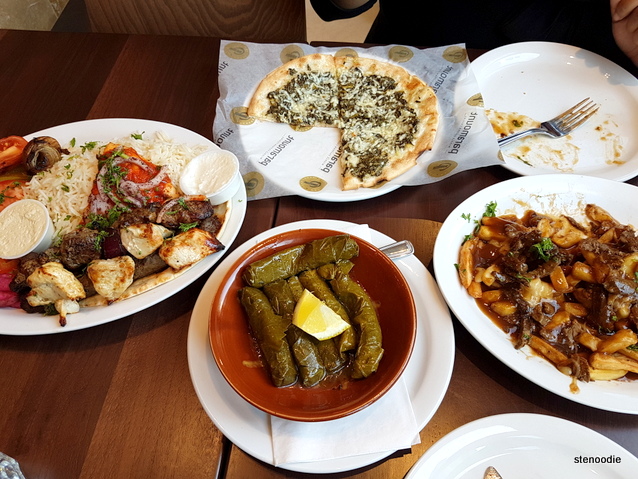 Our spread of Middle Eastern deliciousness 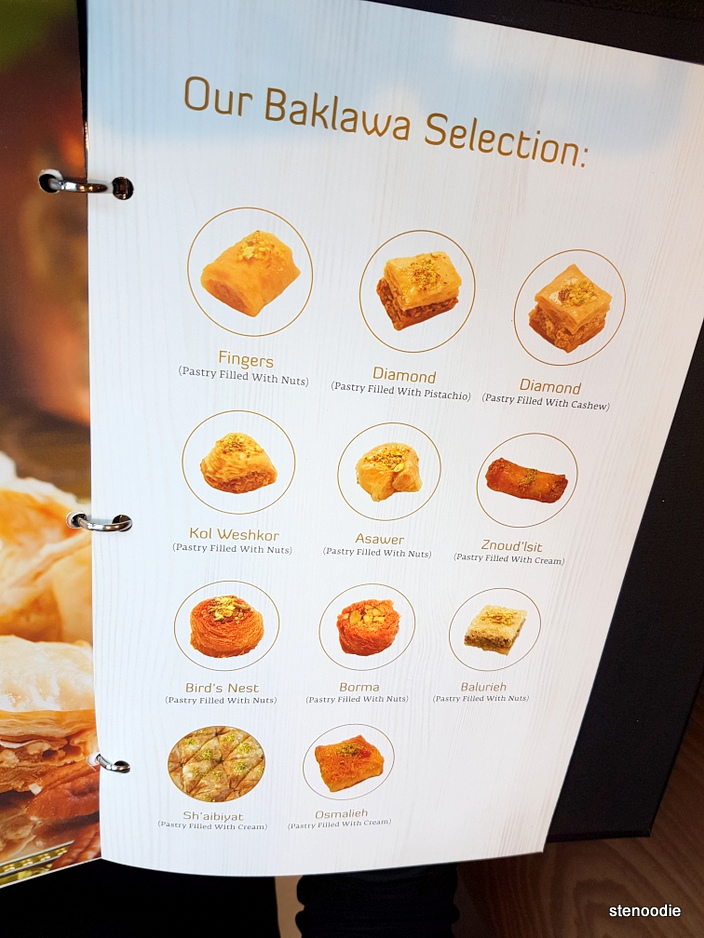 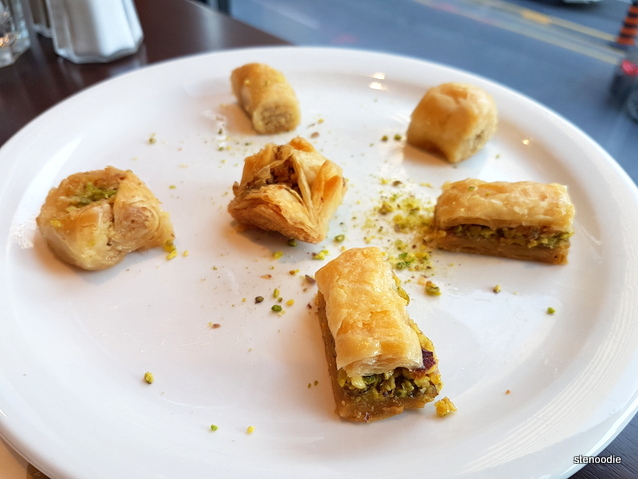 A little bit of each!

Finally, it was inching closer to 7 p.m. and Cinderella Clar (:P) had to go soon.  Thus, we nicely asked the server for some boxes to pack up our remaining food and ordered dessert.  The server informed us that there was only a limited of baklava desserts that day.  We were fine with trying one each of the pistachio and nut baklava creations in different shapes.

The pistachio and nut baklava were actually all really tasty.  I liked that they were just bite-sized and not overly sweet at all.  It was the perfect finish to a wonderful meal!

As we left, Amy also gifted me with a box of baklava to go (I heard from another food blogger later that her guest got a box too… so I wonder why Clar didn’t receive one?)  Anyway, it’s not a big deal because we ended up sharing our gift.  It was more than enough to ask since the gift was a bonus for the night. 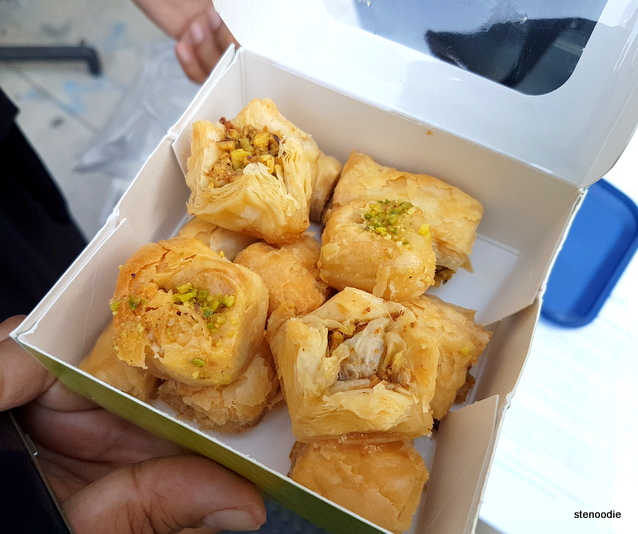 Thank you Amy of Liquid Communications and all of Paramount Fine Foods and the staff at the restaurant for making our stay so delicious and enjoyable. 🙂

FTC Disclaimer:  Although Liquid Communications invited me to a complimentary tasting to showcase the new summer menu at Paramount Fine Foods, the opinions expressed here represent my own and not those of the companies.