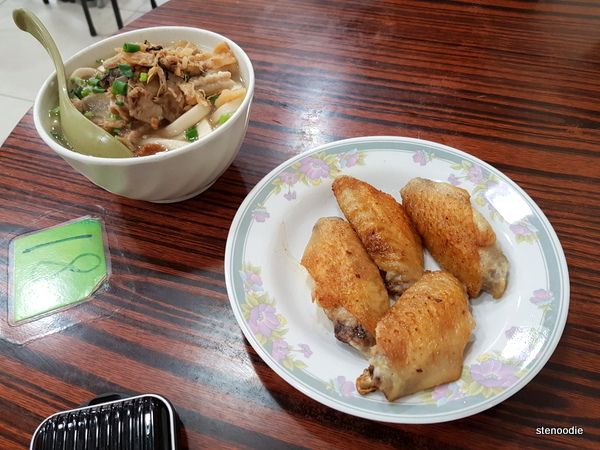 After the foot massage, I was feeling a bit hungry so we went to one of the nearby noodle places recommended by the hotel.  This was Ying Kee Noodle (英記油渣麵) and featured pig lard noodles.

Apparently, lard noodle originated from the 60s and 70s as a traditional Hong Kong food. Ying Kee has been operating for more than 40 years with its pork soup and deep fried pork belly as its signature dishes. 😀

I was excited to try it out despite looking at the photos originally and not truly interested in the thick-cut noodles (I prefer thin noodles). 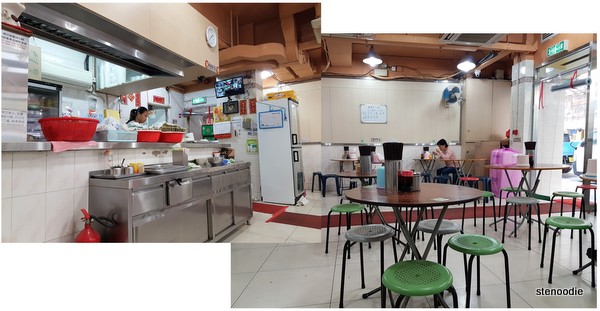 We walked in at 1:30 p.m. on a Friday.  Right as we walked in to choose a table, the owner asked us what size of noodle we wanted.  We replied we’d take a look first.  The owner said there were only two size bowls — small or large — and proceeded to show us the actual bowls.  We chose the small size.  She asked if we wanted chicken wings or vegetables, and I said yes to the wings and chose “yau mac choi” (油麥菜) for the vegetables.

This was a typical and very traditional dai pai dong style of eatery where there were fold-up stools at each table with all the self-serve utensils and condiments on the table. 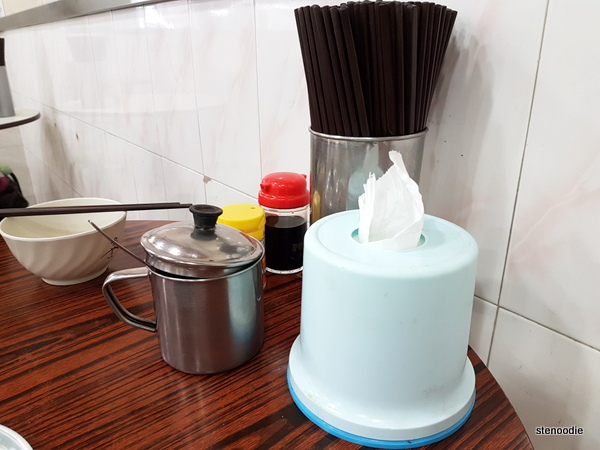 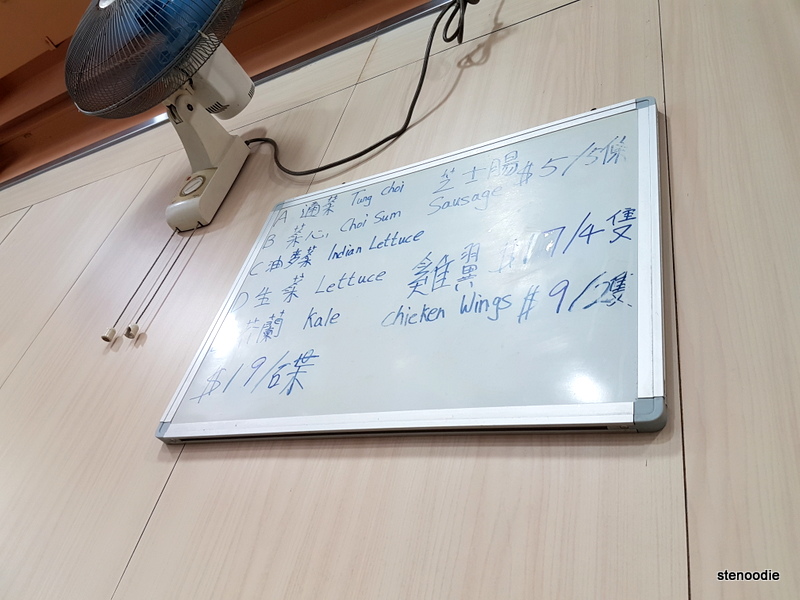 Menu for side dishes (sausages, chicken wings, and types of vegetables) 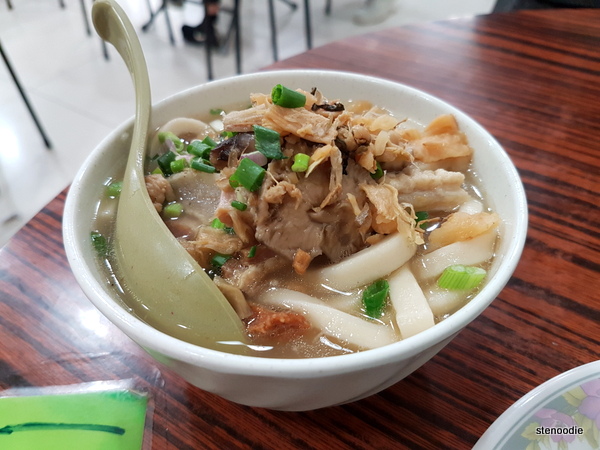 The bowl of pig lard noodles arrived almost instantly.  It was filled with long thick noodles, lean and fat prices of pork belly, and diced Chinese mushrooms in the pork soup.  There were green onions and preserved veggies scattered on top.

I took one sip of the soup, and it was wonderfully umami and delicious.  The thick noodles were very tender and smooth, completely unlike other thick starchy noodles I’ve had before.  It wasn’t greasy or fatty despite being fried in pig lard.  It was really tasty and unique.  No wonder this place was so popular!  The fatty pieces of pork were tasty too.  I finished all of the pork soup too. 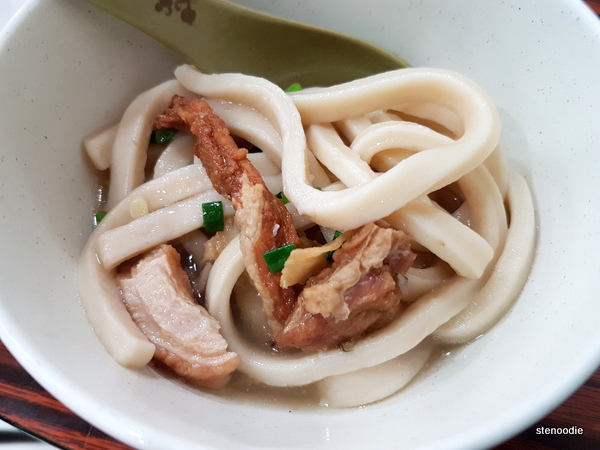 Close-up of the lard noodles and some pork

The plate of four chicken wings arrived, and it was so home-style.  It was delicious!  It was fresh, slightly seasoned, and perfect. 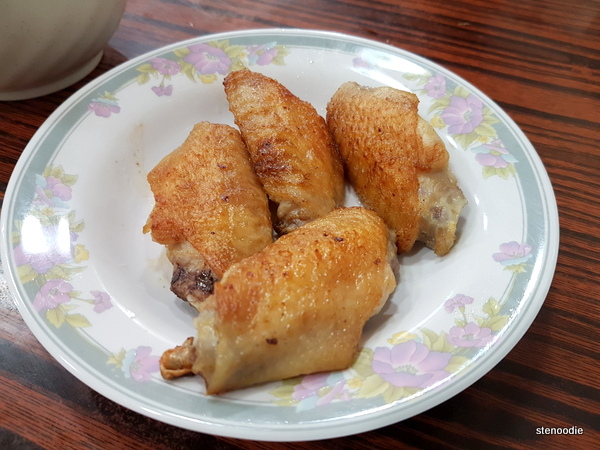 The Indian lettuce (油麥菜) was also great and fresh.  It was delicious as well. ^_^ 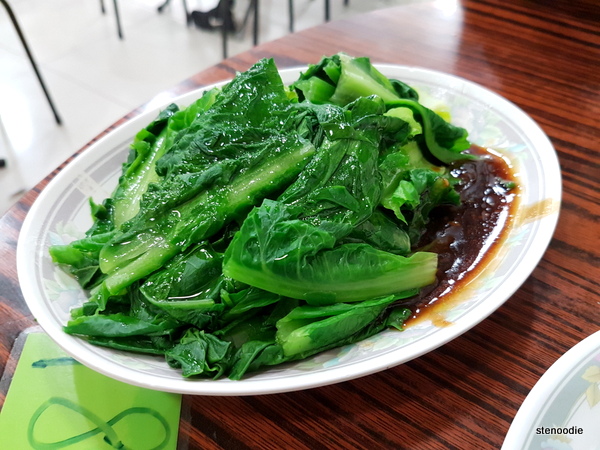 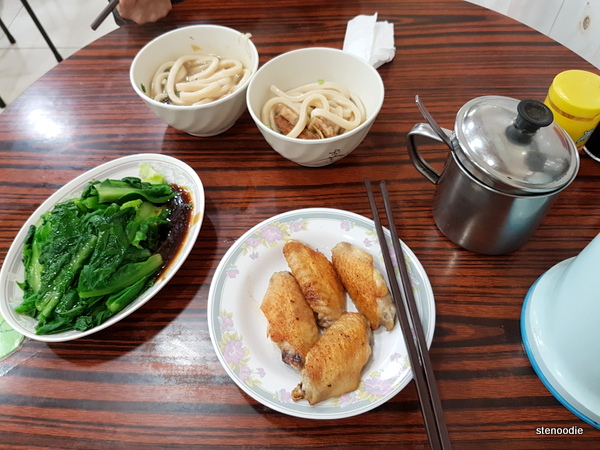 Such a simple but satisfying lunch!

During our visit, I saw so many people come in for a bowl of the pig lard noodles.  Some were locals, coming in and asking right away for a large or small bowl with customization requests of “small bowl, more lean pork, less mushrooms” or “large bowl, more mushrooms, less soup”, etc.  A few were newbies like us where the owner waved the size of the bowl to them in the air.

It was very fast, effective, and no-nonsense service.  Having only three main items on the menu made for such a simple ordering process too (noodles — large or small size, chicken wings — two or four, and vegetables — a few kinds). 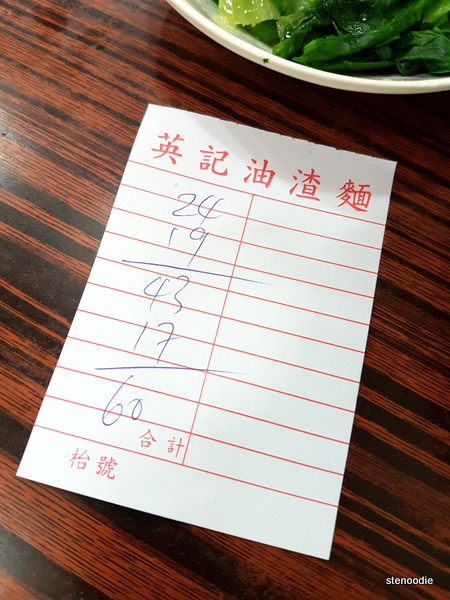 I really liked this place and would recommend it to tourists and locals. 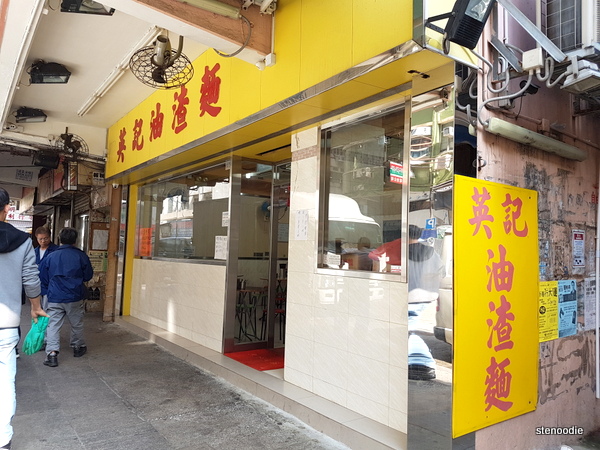