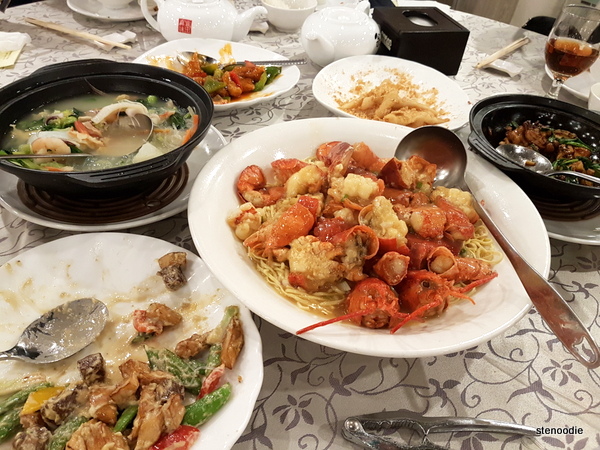 We had dinner with some family friends at Fu Weng Seafood Restaurant in Kwun Tong.  We ordered seven dishes to eat a la family style.  The food was very good and the portions were reasonable.

Fu Weng Seafood (福翁海鮮薈) located inside the Lu Plaza is a typical Chinese restaurant; clean, bright, with waitstaff, and tables with tablecloth, TVs.  I noticed there was a promotion for hot pot and a platter of sashimi in addition to ordering regular Cantonese dishes.  It was no surprise then that lots of large parties around us were indulging in hot pot.

The first dish was a honey BBQ pork (not pictured).  It was arranged slice by slice on a long plate.  The BBQ pork was so juicy and meaty yet with just enough fat on each piece.  It was delicious! 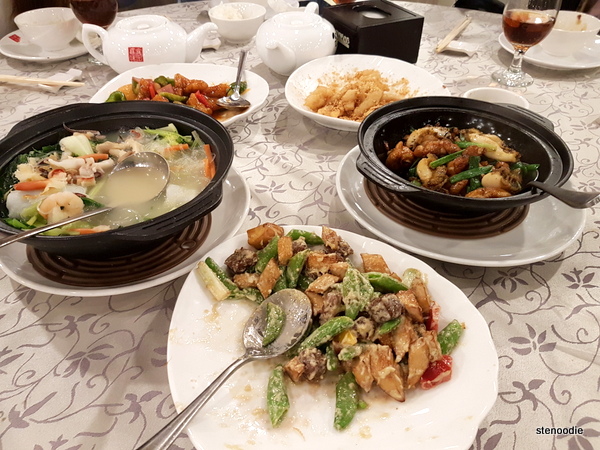 There was a wasabi stir-fried beef cubes with peas and potatoes.  This was quite good too.  The wasabi sauce covering each piece wasn’t enough to be “spicy” in the wasabi kind of way.

The sweet and sour pork was good — meaty and tasty.

The salt and pepper fried squid was nice.  The batter was light so that upon your first bite, it actually separated from the rest of the piece of squid.

The hot clay stone pot had braised chicken and pieces of abalone.  I liked how they halved the abalone pieces.

The assorted seafood vermicelli vegetable stew was the best.  It was 100% comfort food and very “ching” (simple-flavoured).  The vermicelli had soaked up all of the broth and was delicious.  (There weren’t a lot of seafood itself; however, a couple of shrimps and mostly diced squid tentacles.)

Last but not least, the Boston double lobster cheese e fu noodles was also good.  The lobster was cut into smaller pieces than usual.  This was good for sharing though.  The e fu noodles didn’t have enough of a cheese taste than expected. 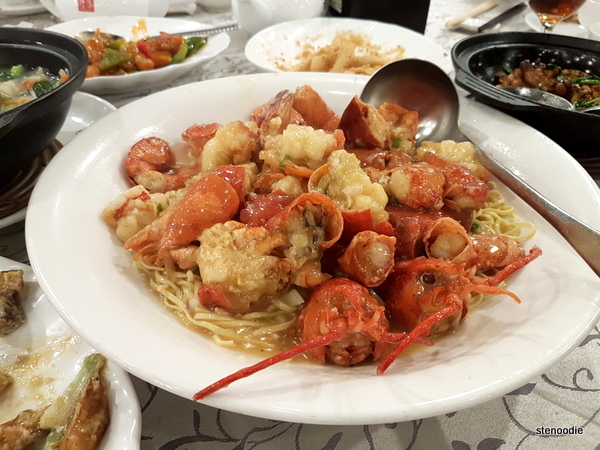 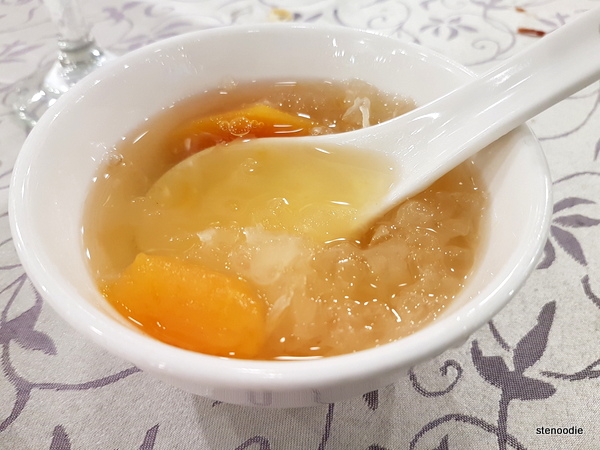 We were given a sweet papaya white fungus dessert to finish off the meal.  The white fungus in this was so soft!

Although the food was very good, the service wasn’t.  They essentially tried to scam us out of $200.  When we placed the order, it was mentioned that the lobster cheese noodle would be $298 ($198 for the double lobster and $100 added for the cheese e fu noodle).  When the bill arrived, it was shown as $498.

We questioned the server about this, and she said there was a typo on the menu and that $298 was only for one lobster cheese noodle and that the double lobster cheese noodle was $498.  We insisted that the menu said it was $298 for the double.  My friend said she had verbally confirmed with the server about the price at least two times before we submitted the order (apparently this discrepancy of prices had occurred to them at this restaurant at a prior meal).  The server feigned apologies and said the problem would be resolved. 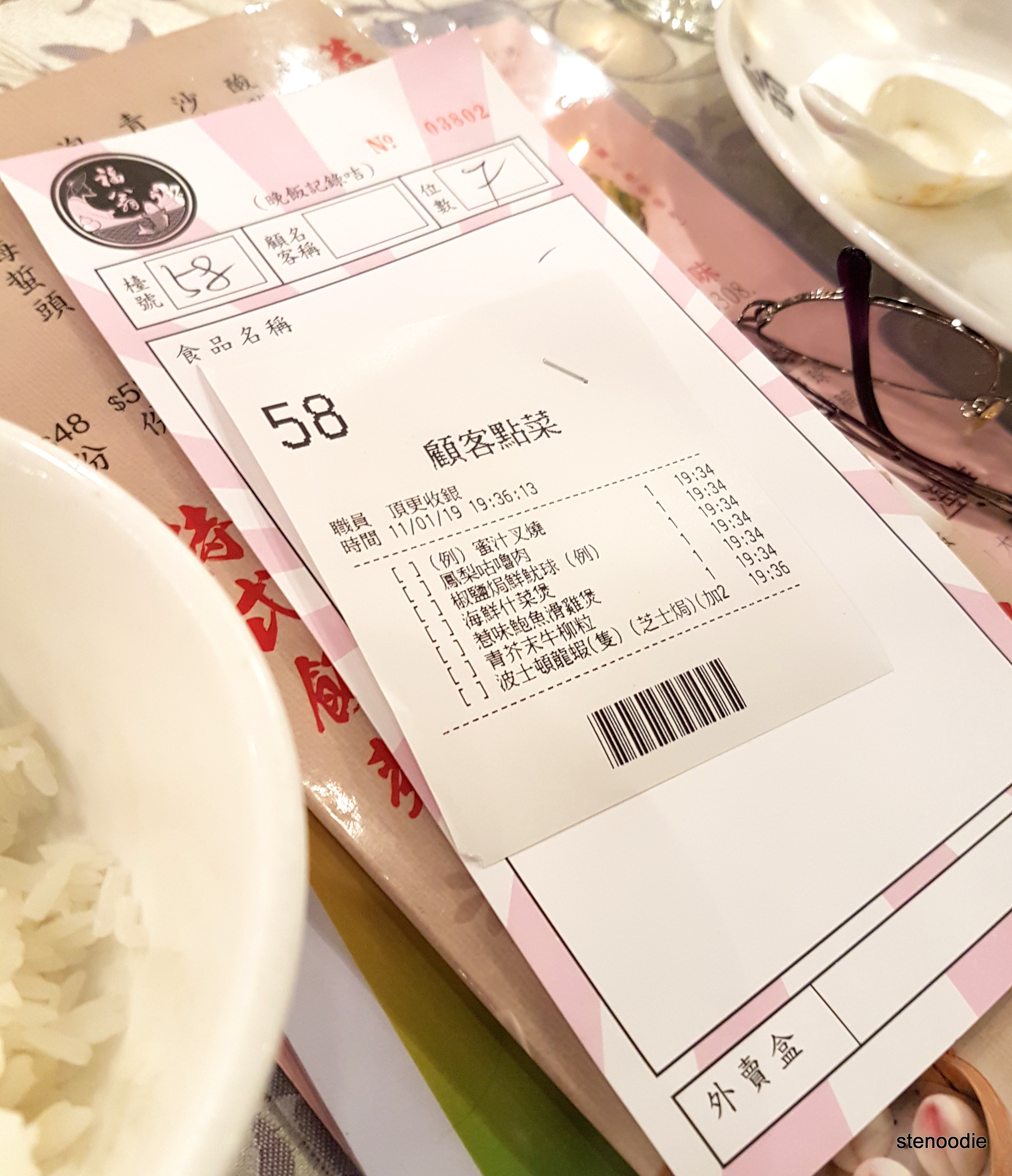 We waited a while for this to be sorted out.  When it was done, we were given $200 in cash to make up for the difference as apparently it couldn’t be done electronically (my friends had paid via credit card).  This was an odd arrangement as usually the change should be able to be made via the machine.

Anyway, we had a long discussion about this afterwards.  The service at this restaurant has proven to be shady after this incident, so please make sure you double check the receipt before paying if you choose to dine at this restaurant.  (If we hadn’t checked the figures, we would have erroneously paid $200 HKD more.) 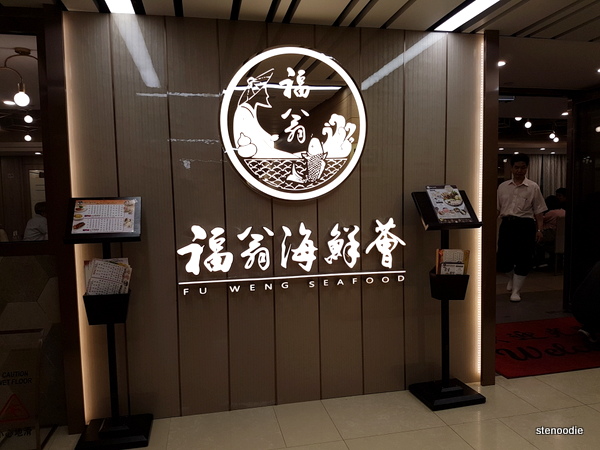