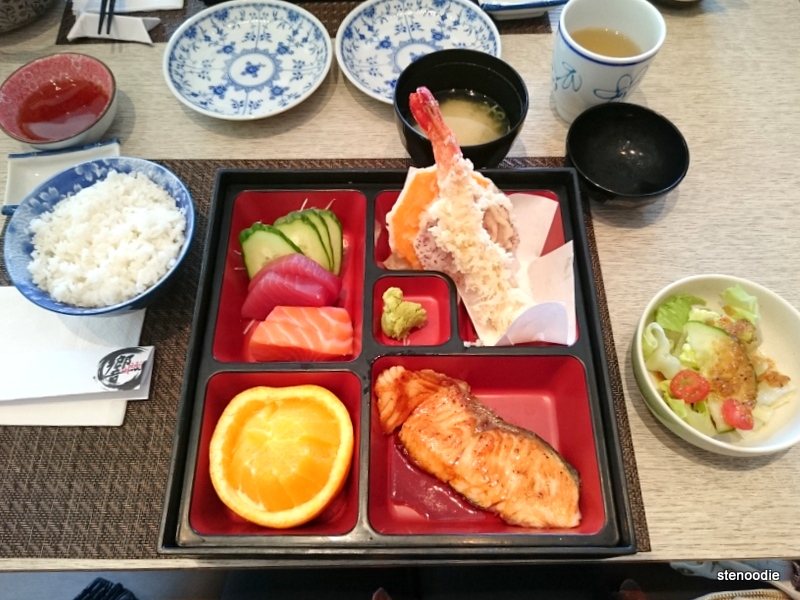 I had a quick lunch with some friends on a Friday afternoon.  Hibiki Japanese Cuisine is located on Highway 7 near Kennedy Road in Markham.  I had actually never heard of this restaurant before and it’s a little hidden if you don’t look out for it while driving on Highway 7.

In fact, I had missed my turn into the restaurant when I was getting there!  It was only because I had looked up what the restaurant looked like ahead of time online that I recognized it and turned into a small side street in order to arrive at their parking lot.  Since I was here for lunch a little after noon time on a weekday Friday, the parking lot was already jam packed!  I had to park a little down the street since there were no more parking spaces.  Good thing it was a beautiful, crisp spring day for a short 2-minute walk. 🙂 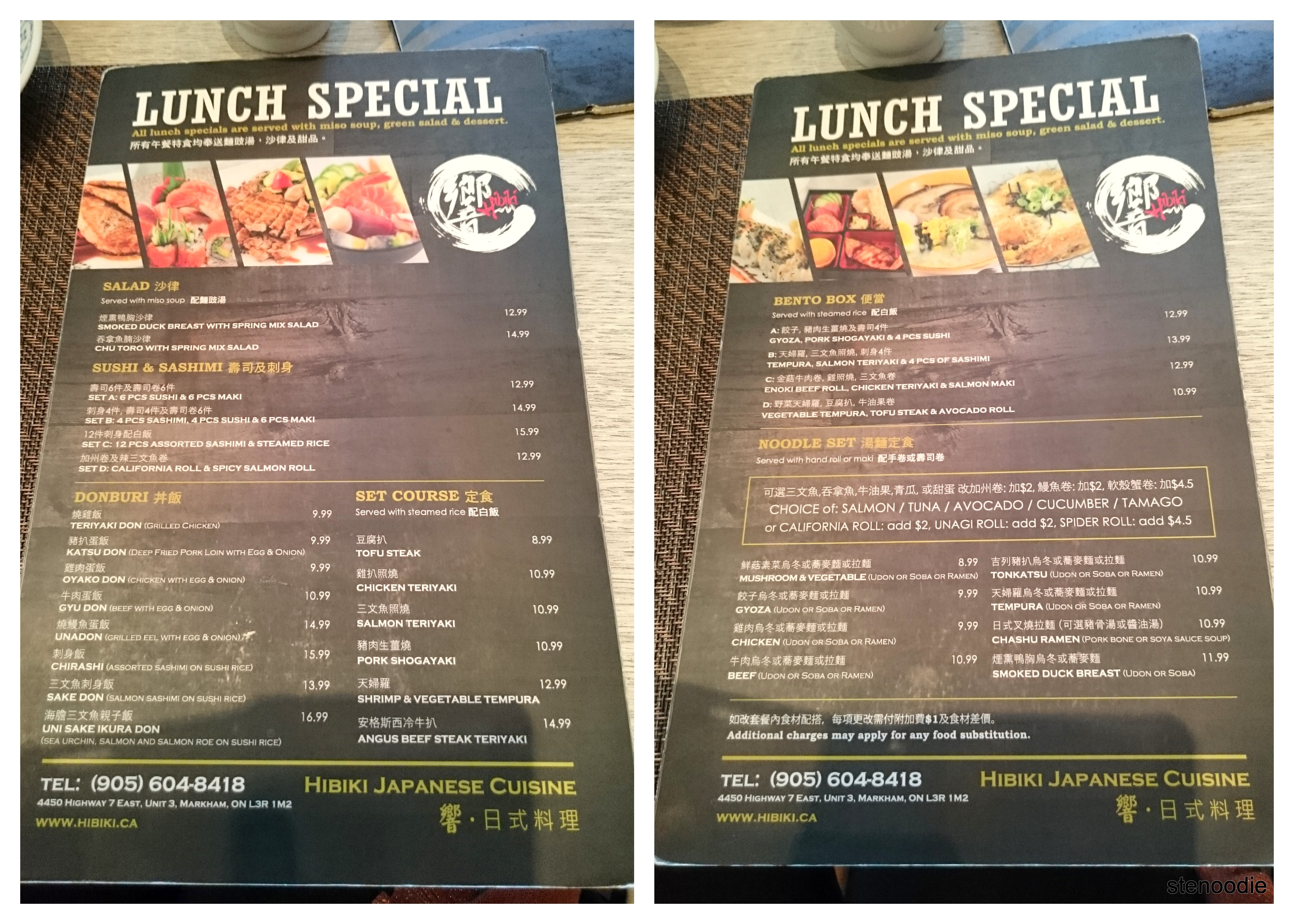 My friends had already arrived and ordered their food.  Looking at their lunch menu, I was impressed with the variety.  They not only had bento boxes and ramen set options, but they also had donburi, salads, and set courses with cooked food.

Hikibi Japanese Cuisine is really nicely designed inside with an open concept dining room with ample tables and booths.  I really liked the atmosphere there.  Steve said that when he arrived at noon, there was no one inside the restaurant.  However, in a matter of just 30 minutes for lunch, the place had completely filled up!  Their lunch specials are very decently priced and the quality of the food was really good as well. 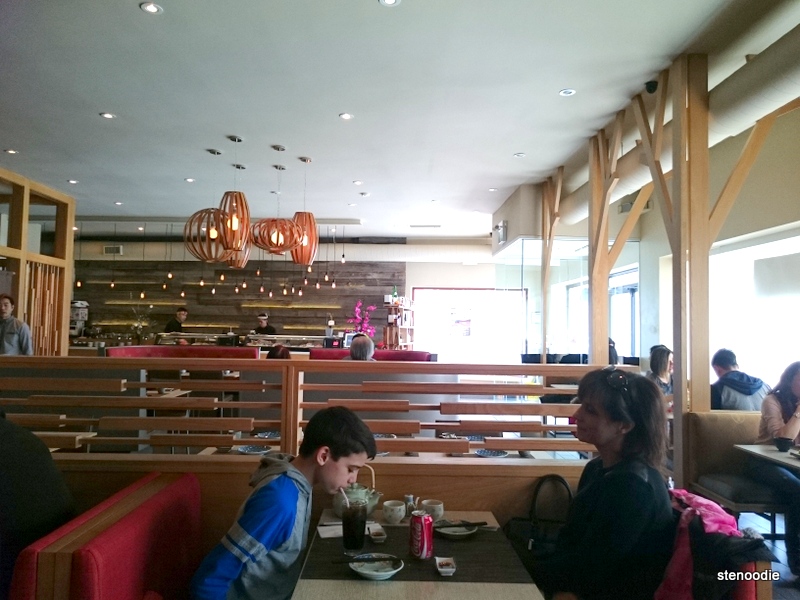 The inside of Hibiki Japanese Cuisine

I ordered the Bento Box Set B.  It came with tempura, salmon teriyaki, and 4 pieces of sashimi.  I was in the mood for this that day! 🙂  All of their lunch specials are served with miso soup, green salad, and dessert (or coffee). 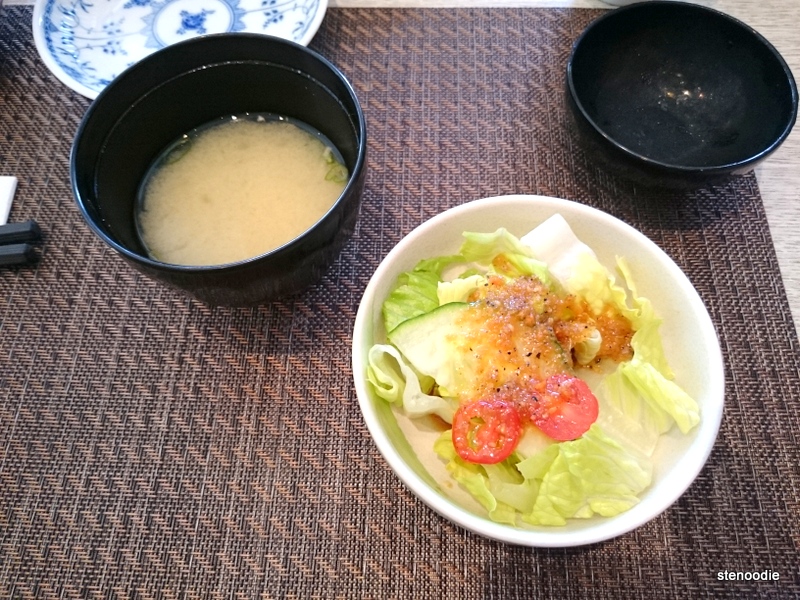 I was also impressed with how fast my food arrived considering that I had arrived after my friends already did and ordered too.  The service here was very fast, efficient, and professional.

I liked the green salad.  The greens were very fresh, crisp, and the dressing was light.  The miso soup was good and I didn’t feel too thirsty afterwards so that meant there was no MSG used (probably). 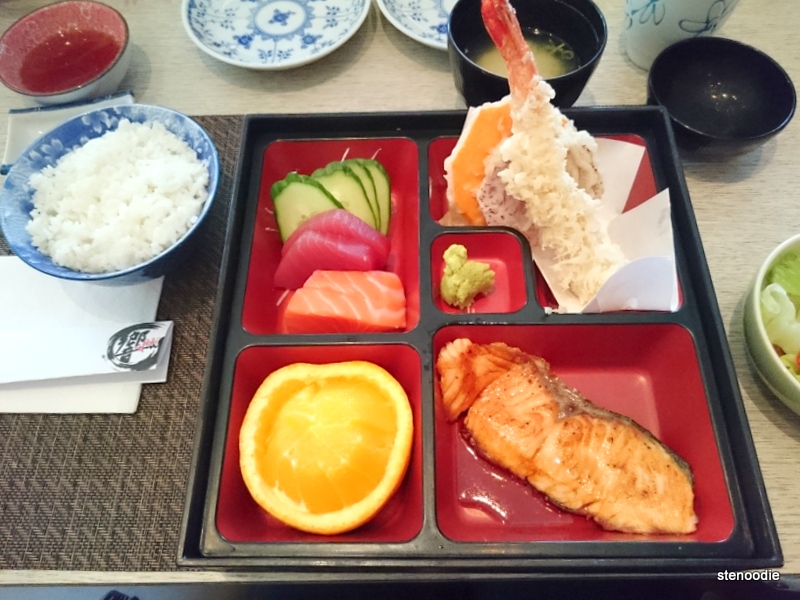 My Bento Box was a delight and so colourful!  It had some segmented oranges too for post-meal.  I liked the quality of the salmon and tuna sashimi.  Yum!  The wasabi was spicy too.

The shrimp tempura was absolutely delicious!  The shrimp itself was large and substantial.  The batter of the tempura wasn’t too thick either.  There was also tempura sweet potato, zucchini, and taro; all of which were fresh and tasted good.

I liked the texture of the Japanese rice.  The salmon teriyaki was a little on the dry side and thin.  It was still decent.

The bento box was more than enough for me and so I packed the rest home.

These are what my friends ordered: 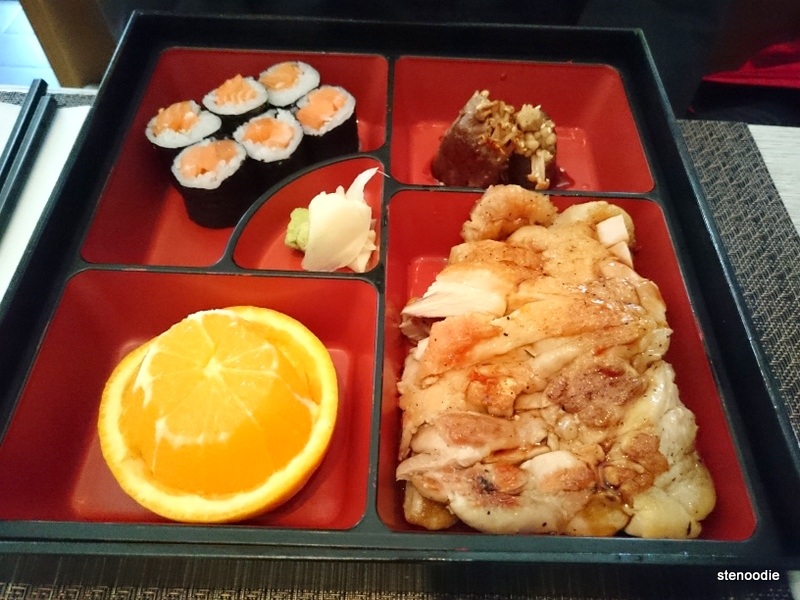 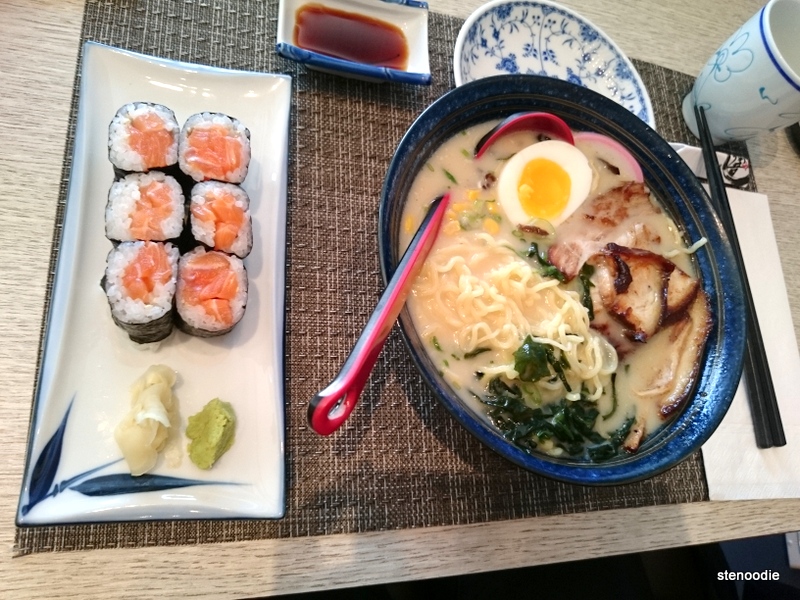 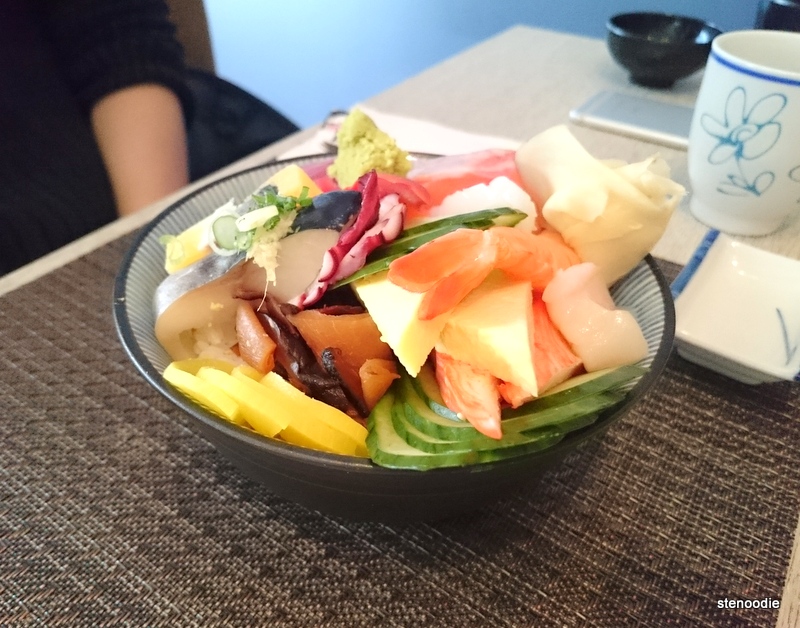 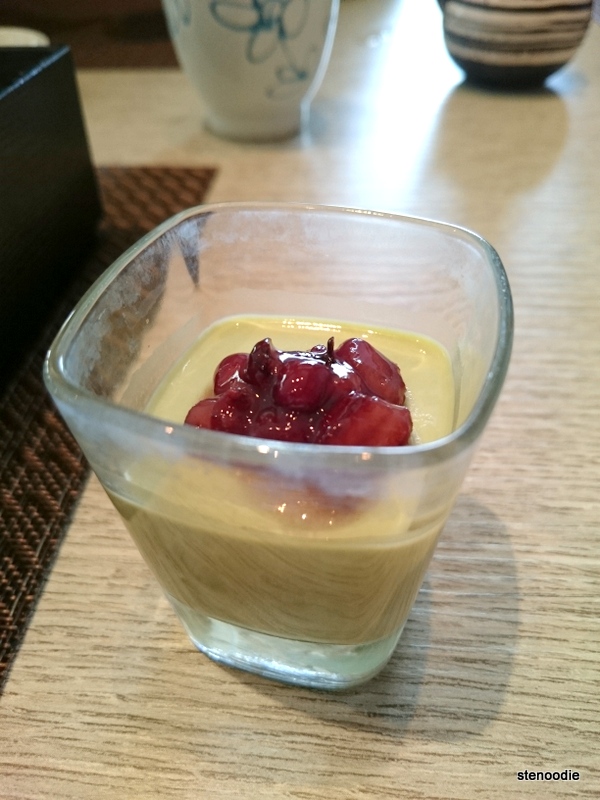 We were given a choice of dessert or coffee to finish off the lunch special.  Three of us chose dessert while TK chose coffee.  Their coffee is a special type of Japanese coffee.  It’s called Siphon Coffee and you can read more about it in this article.

The dessert was a small cute container of matcha pudding with red beans on top of it.  I really liked the dense matcha flavour in the pudding and it was a great cold dessert to end our meal.

This was a nice, quick lunch for us to catch up briefly and see each other again.  It was really enjoyable!  I’m so glad that I got to check out this new Japanese restaurant in Markham that I had never been to.  I’d love to come again in the future to try more! 🙂

Have you been to Hibiki Japanese Cuisine before?  What did you think of it? 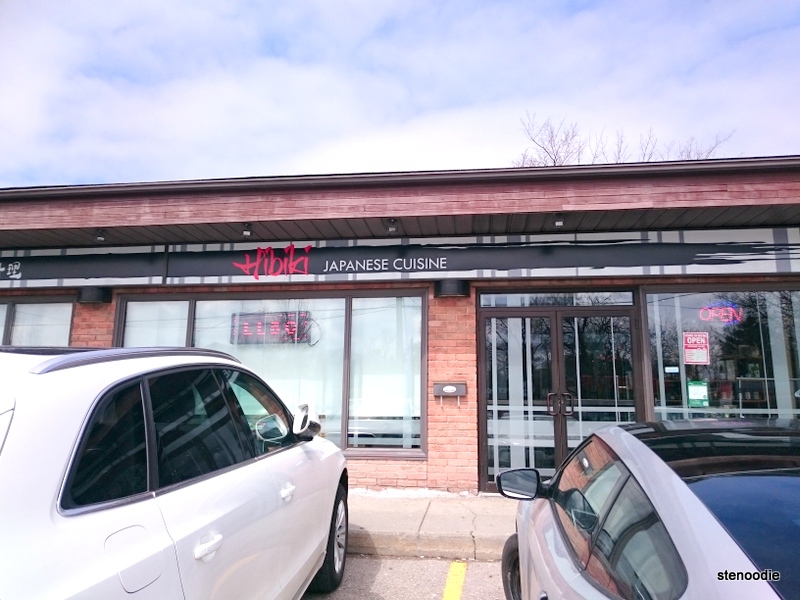 What Hikbi Japanese Cuisine looks like from the outside