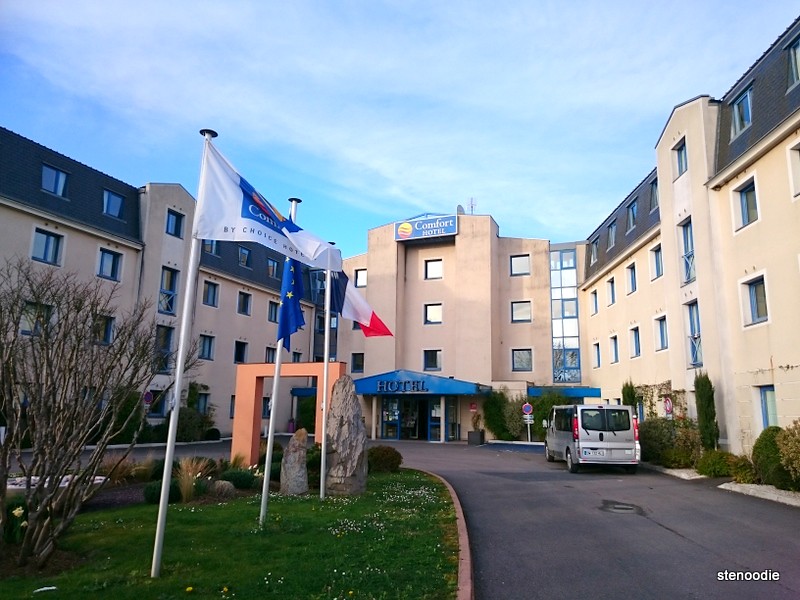 This blog post is a review on the Comfort Hotel Airport CDG hotel that I stayed at in Paris, France for four nights in April 2016.

On our first night in Paris, France, we checked into Comfort Hotel Airport CDG.  It was a medium-sized hotel located at 1 bis Rue de Paris, 77990 Le Mesnil-Amelot in France.  It is considered a 2-star hotel and located just ten minutes by car from Aéroport Paris-Charles de Gaulle, the main airport in France (about 4.1 km).  The hotel offers a complimentary shuttle to and from the airport that operates every half hour which made it very convenient for travellers such as myself. 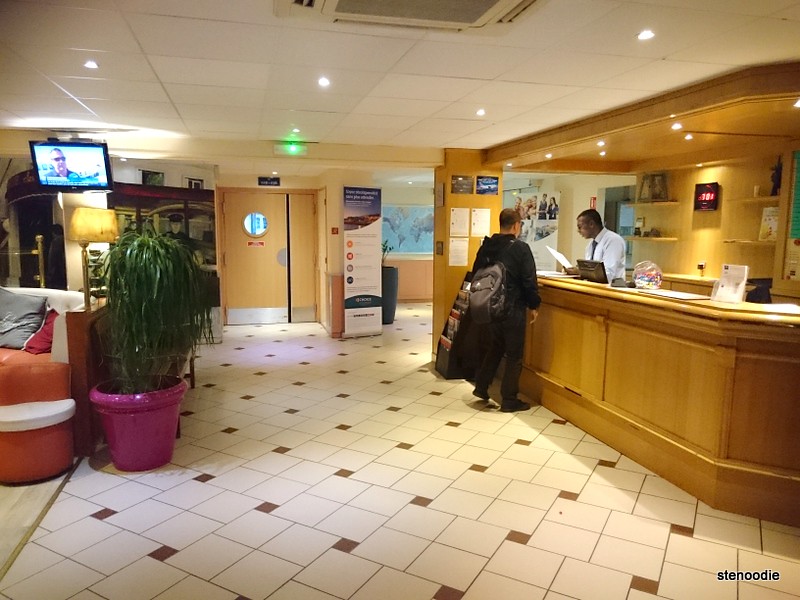 First view of the lobby when you walk in

As we were travelling by a tour company in Paris, France, our arrangements for our stay at Comfort Hotel Airport CDG were pre-arranged and all we had to do when we arrived at the hotel was check in at the reception desk.  It was a smooth process using our passports.  We were given our room key (a single one using a touchless key card system).

It was a medium-sized hotel as their lobby was very low-key and casual.  From the lobby, could see the L’Escale restaurant and bar right away. 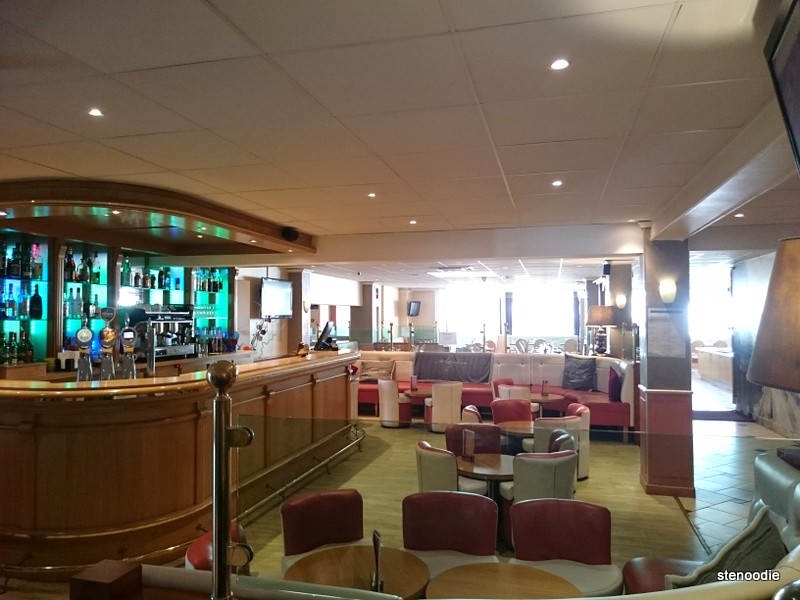 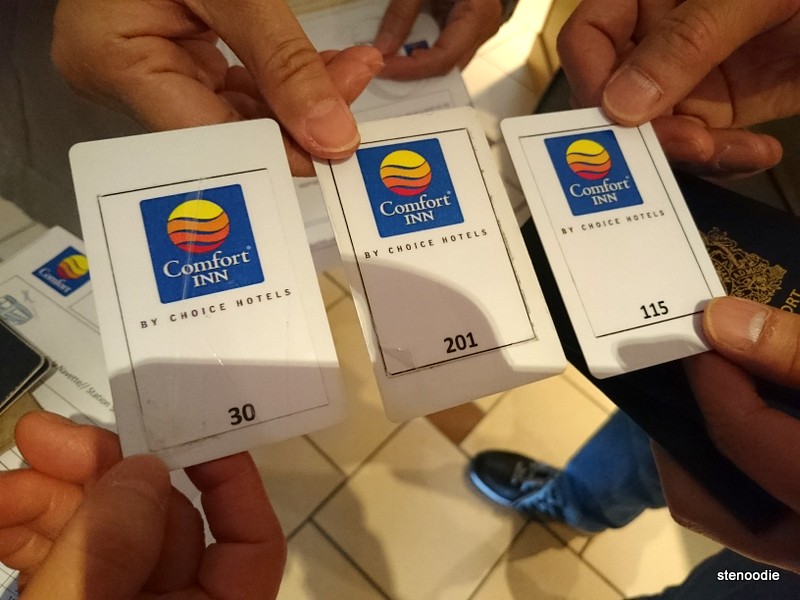 Upon checking into our room, we knew right away that this was definitely one of those “European” hotels.  This was much smaller, old, and lower grade than the hotels that I usually stay at.  Nevertheless, I was grateful for it as I knew we were saving money by staying in a lower-grade hotel as touring in Europe was already a pricey trip in and of itself.  Staying at this hotel for four nights definitely humbled me because I was so used to certain things.  It made me grateful to live in a first world country and get to travel.  I also have to add that even though it was small and old, the room was still very clean. 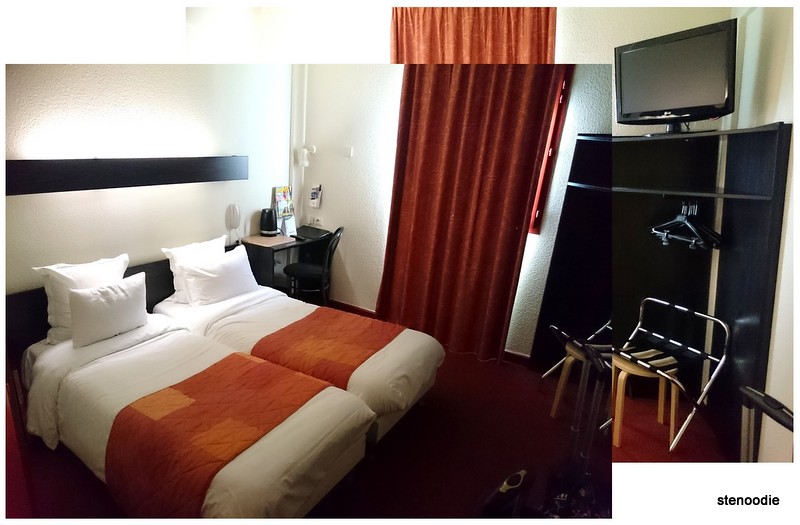 First off, the room was very small and the two single beds were pushed together (I think this was a style of European hotels).  There wasn’t much room to walk around in in the room.  There was a safe, a small desk with a simple chair, water kettle, a flat-screen TV hung on the corner, a bench to place the luggage, a corner “closet” with clothes hangers, temperature control system on the wall, and a full-length wall mirror. 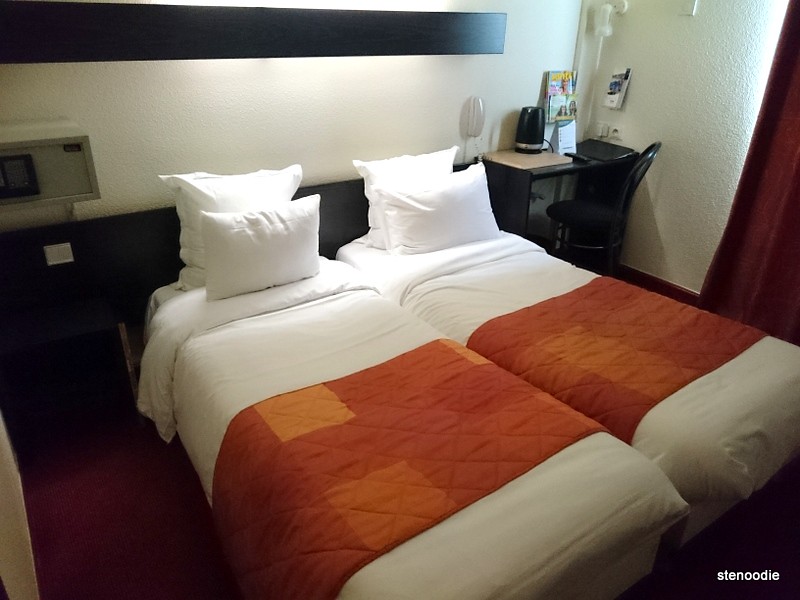 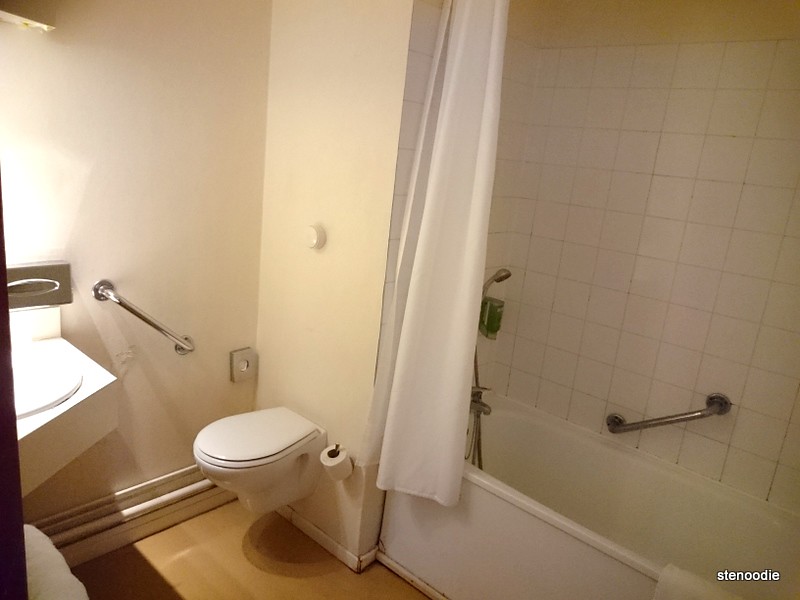 The bathroom was a decent size.  The corners and walls of the hotel revealed its old age and lack of upkeep.  There was a tub with a shower head that you could maneuver around (I love these showers!).  There was a simple hair dryer connected to the wall and a multi-use gel for all-in-one hand wash/body wash/shampoo/conditioner — in fact, this must have been one of the first times that I’ve seen a container be so multi-functional all at once!  There was also a second similar bottle in the shower area.  There were no ceramic mugs or glasses; instead, there were two plastic cups wrapped in plastic for you to use.

One thing I really appreciated about the bathroom is that the shower head was extremely powerful!  I had to adjust and turn down the power of the shower head because it was just so strong.  I had never used such a strong shower head before and this was quite rare in hotels especially because their shower heads usually are so weak.

This was such a different experience staying at this hotel because everything was so simple and run-down.  Again, this experience humbled me so much. 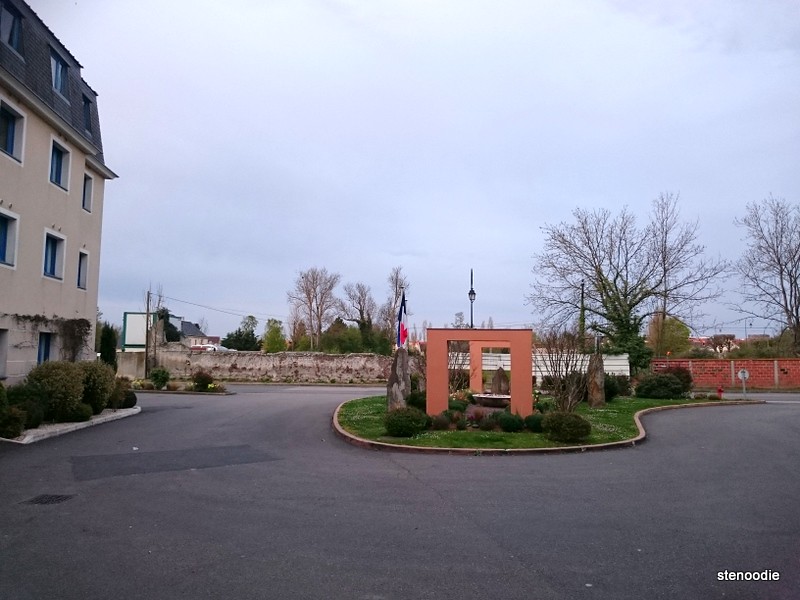 The view across from the hotel

As much as everything was simple and quite old, I actually found a lot of comfort staying at this hotel.  We stayed here for four nights; the first two consecutively and then returning again to stay here for our last two nights in Paris (April 12-13th and 19-20th).  The bed and pillows were exceedingly comfortable and I fell asleep easily at night.  It actually felt like I was at home.  Their namesake “comfort hotel” definitely rang true for me! 🙂 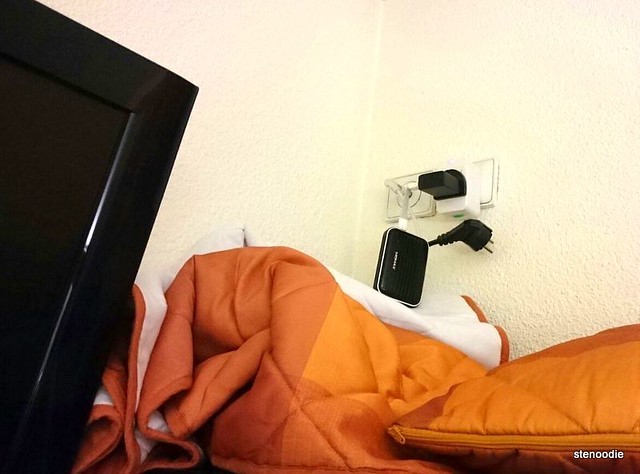 You can’t tell from this angle, but I had to climb on top of a chair in order to use this power outlet that was in the wall

One definite down side to this hotel room was that there were only two power outlets in the entire room available for use (the third visible one was perched high on the wall for the flat-screen TV).  I was glad that at least I could fully charge my devices using the two available outlets (one beside the desk and one in the washroom above the towel rack).  However, when we compared room details with our friends, they said that theirs only had one power outlet in the room and that they had no towel rack either!

This dilemma wasn’t personally felt until our last two nights at the hotel (where after we returned, we got a different room than the first one we had).  In this second room, I found out that we only had one power outlet as well!  This was highly inconvenient!  (I had to charge not only my phone to maximum capacity for travelling and sightseeing but also my battery pack as well — both of which typically took four hours to charge fully.) 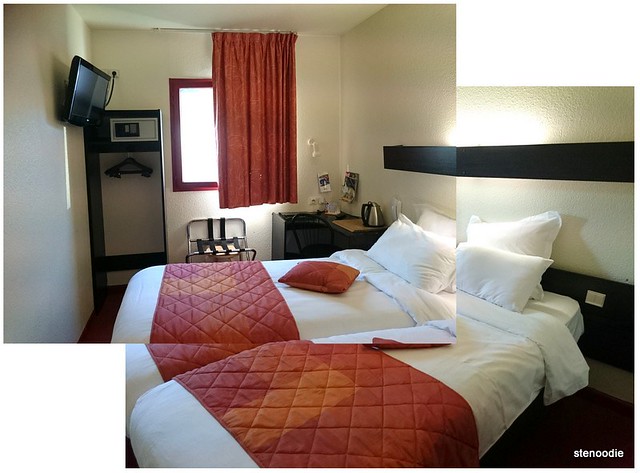 Room #1 that we stayed at on our second visit. This room was much smaller 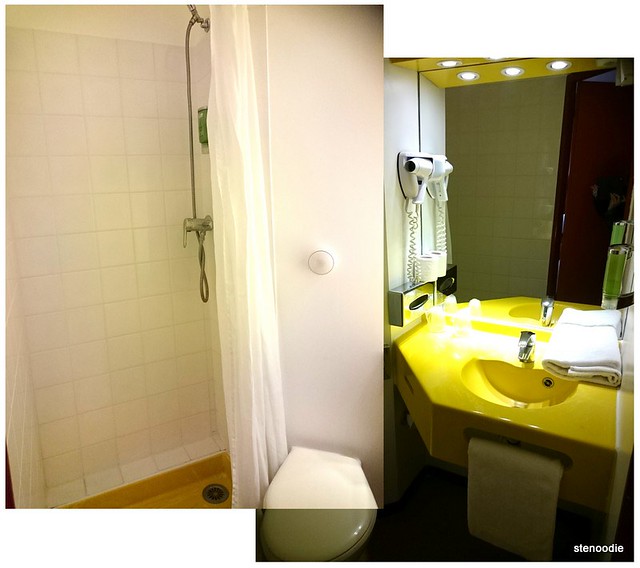 To solve this problem, I actually climbed up on the chair and unplugged the cord of the flat-screen TV from the wall and used that second power outlet in the room.  I had no other choice.  This made me realize the value of power outlets and how much we take available ones for granted!

In addition, the shower in the bathroom in the second hotel room we stayed at (lucky room #1) had an incredibly inconvenient shower head.  First of all, it was very small and cramped.  Second of all, the shower head was fixed and not adjustable.  The way that the shower head directed was on the wall so that you could barely get much water out of the shower.  It made for two frustrating (but humble) nights of showering.  I actually used one of the plastic cups provided to scoop up water to pour on myself to shower properly….  that was definitely a first in a hotel.  Again, I was humbled, to put it gratefully, because not everyone in the world has access to hot water or showers. 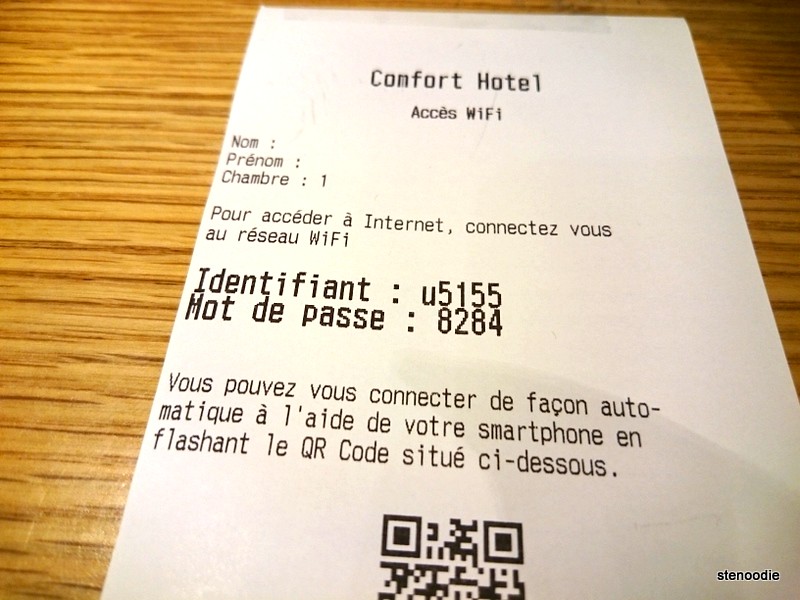 One more slightly problematic topic was the wifi in the hotel.  There was wifi in the hotel for sure, but in order to obtain it, you needed to get the login and password from the front reception desk.  The first one didn’t work for me so I had to go out and get another login slip from the front reception desk (interesting system as the reception printed me off different variations of the wifi login and password but yet they all still were applicable in the login browser process).  The wifi signal was a little wonky at times, going in and out late at night, but was relatively fast.  The wifi for my friends didn’t work on the second night so they had to do without it (the horror!).

When we returned to the hotel for the second stay, I actually went out into the front lobby to use their wifi where the wifi reception was the strongest instead of staying in my room to use it.

Their service was fast and friendly.  We needed some extra towels on the second last night of our stay.  I telephoned the reception desk to inquire about it and the man told me to come out to get them from the front desk (no room service here haha).  The service was fast though and it was short walk to the reception desk (seeing as it was a small-ish medium-sized hotel). 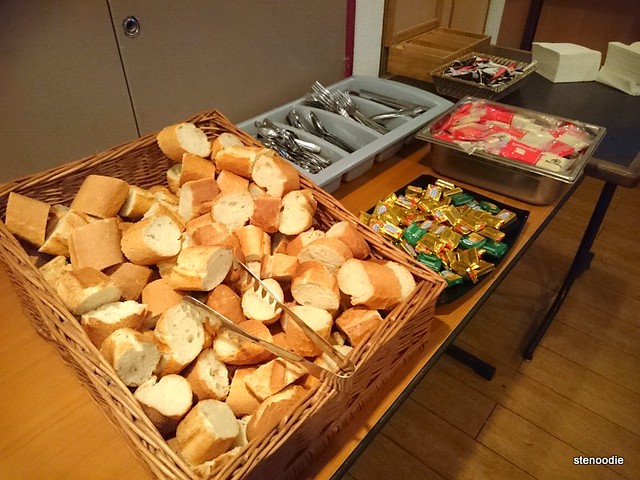 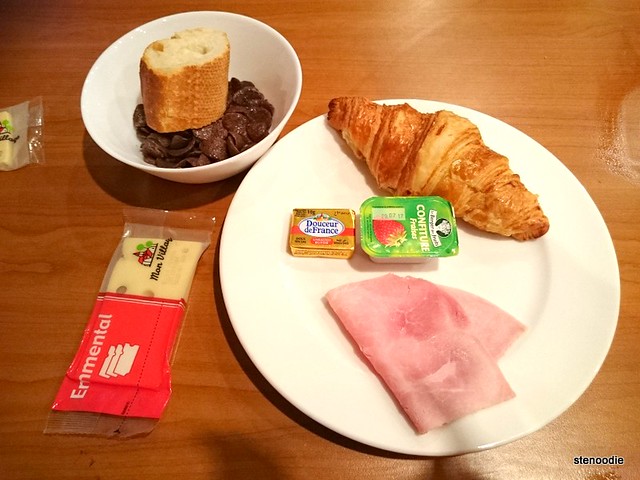 Simplest breakfast I’ve had in a while! 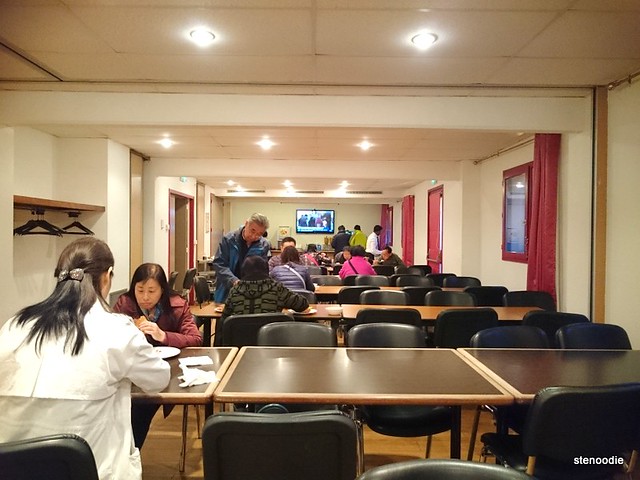 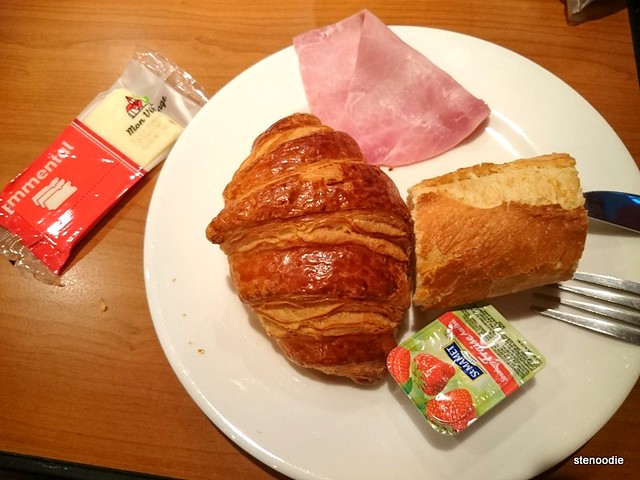 Getting into a routine with my simple breakfast 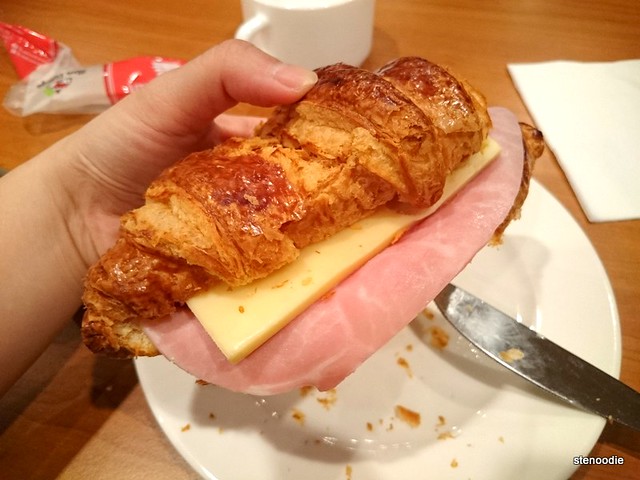 I made a breakfast croissant sandwich! XD

Breakfast:  Breakfast at the hotel was very minimalist.  Don’t expect a satisfying continental breakfast here.  All we had were cold items like cereal, croissants, French baguettes, ham, jam, hot coffee, and water.  At least, this was the type of breakfast that was included as part of our tour.  We heard that if you wanted a better breakfast, you could pay 20€ for a typical continental one. 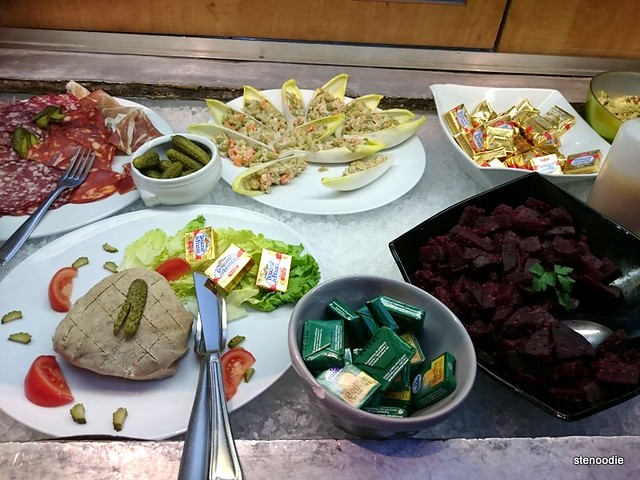 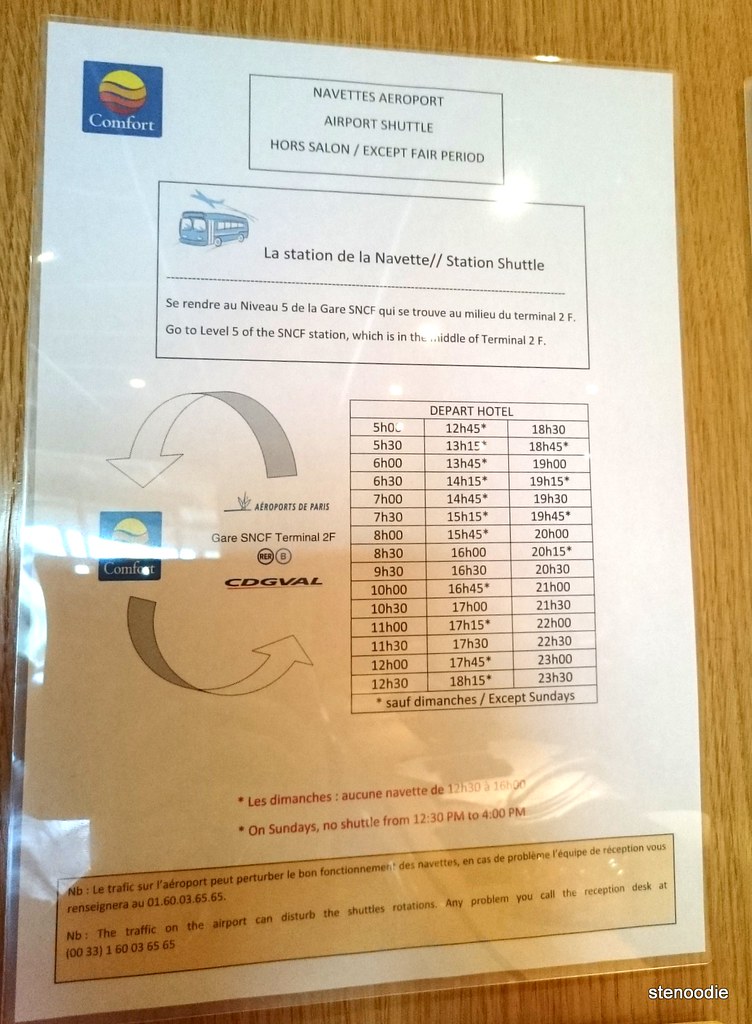 Free shuttle bus service:  This was very convenient and fast.  The shuttle bus driver departed and arrived right on schedule to and from the airport and hotel. 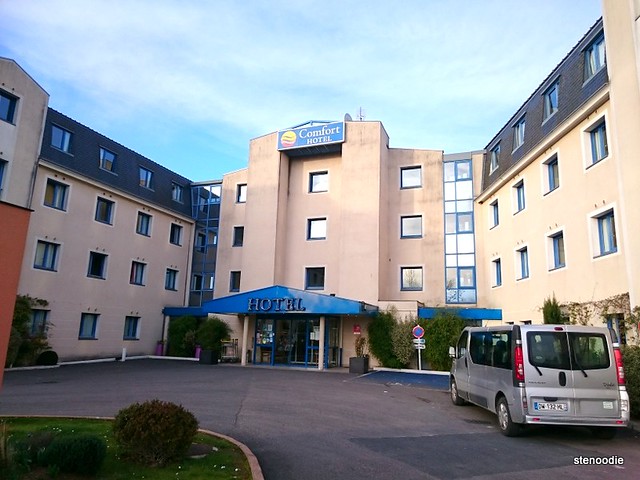 Ultimately, I think that if you are saving money and travelling in Paris, this hotel is a decent one to stay at.  However, if you are used to 4 star and above hotels, you will find this one quite horrifying and definitely not up-to-par — there’s a reason why this is a 2-star hotel!  Also, it is a little far from the main city, so you will have to spend your way commuting around the city to the hotel if that is where your main touring points are.  I found that the hotel room mainly lacked enough power outlets (bring a power bar!) and reliable wifi.  It was a clean, comfortable, and minimalist stay.

Hope this review of Comfort Hotel Airport CDG was useful for you! 🙂