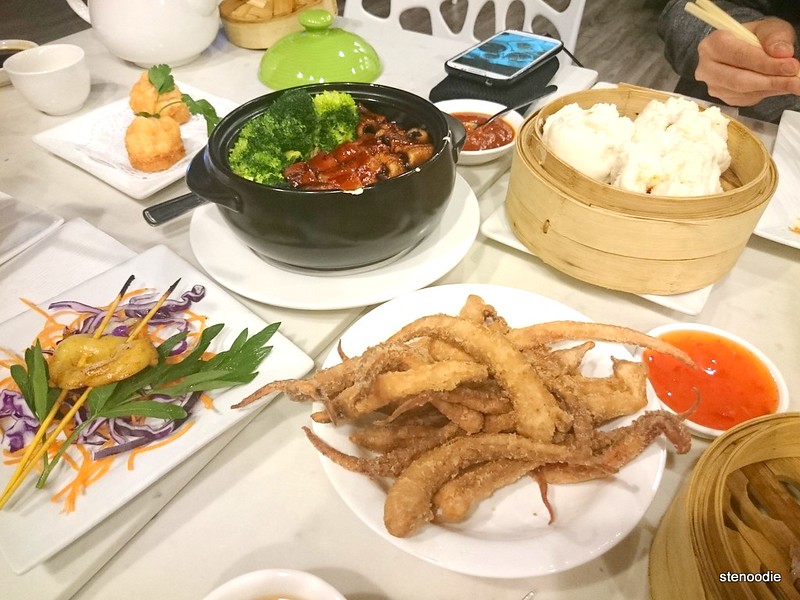 On a Monday afternoon, three of us were able to find time to go for dim sum together at Pearl King in downtown Toronto.  There was a great deal on Groupon where you could get $15 for $30 worth of dim sum so we decided to try it out and also have some quality catch-up time during this meal.

Pearl King is located in downtown Toronto on King Street West where there are a plethora of many other great restaurants like Home of the Brave, Lee, and Bar Hop.  It is a Chinese restaurant with authentic Chinese dim sum in addition to small plates or tapas with more of a Western feel.  As it was a weekday, there weren’t many people dining inside the restaurant as we arrived just after noon. 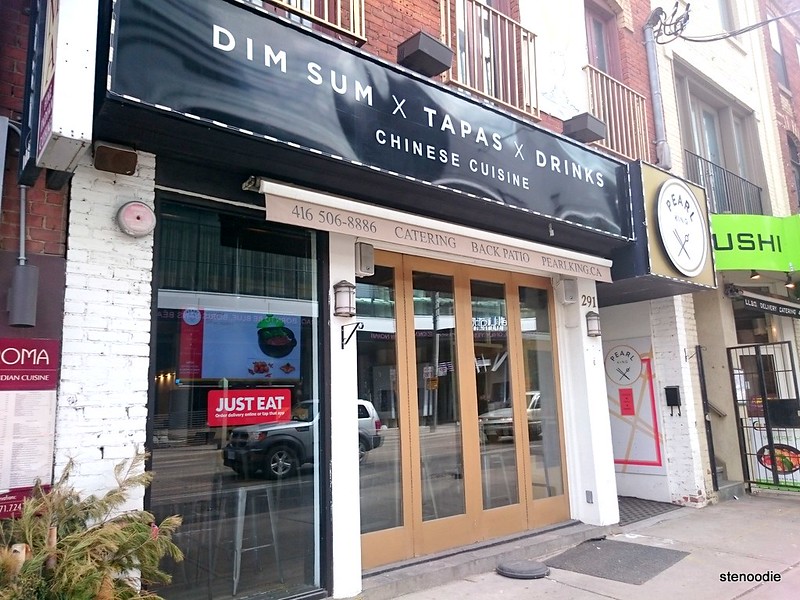 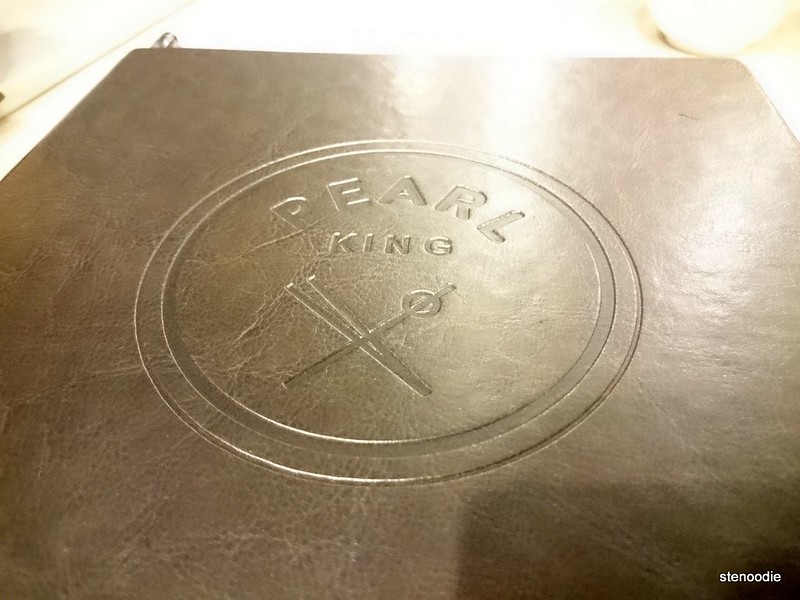 Emily was one of the servers there on this quiet Monday and she was very courteous and professional while attending to us.  We ordered eight dishes off the menu to share and informed her about our Groupon deal upon ordering.  It seemed like the other two parties who were dining a few tables away from us were also here because of the Groupon deal. 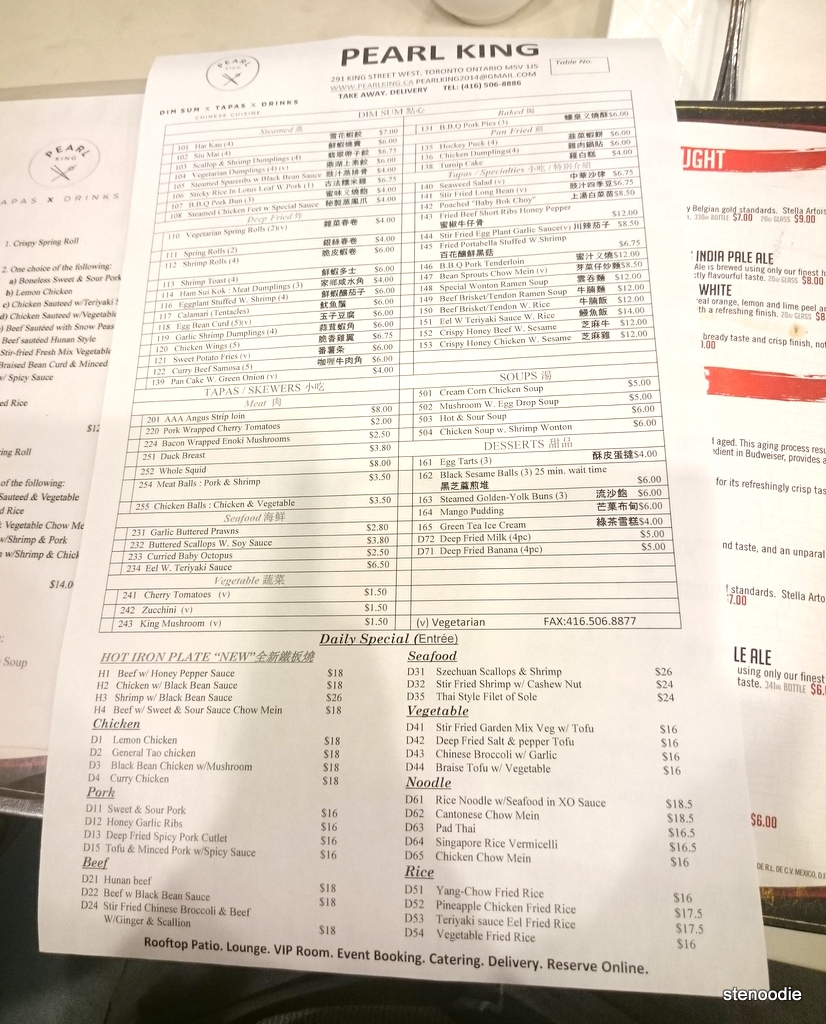 The food didn’t take long to arrive and I was so happy to take pictures of it all because it all looked so good!  We had an amazing spread of Chinese dim sum to share. 😀 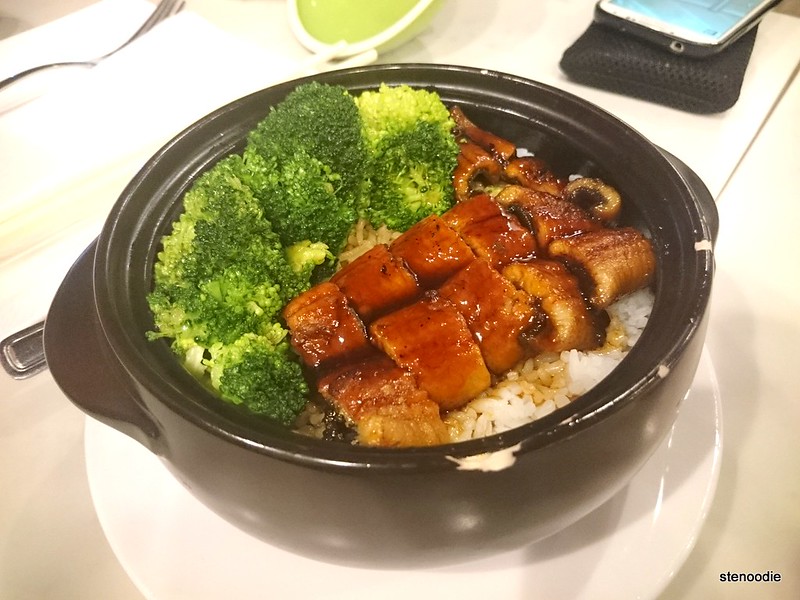 Eel with Teriyaki Sauce with Rice. $14

The Eel with Teriyaki Sauce with Rice was the first to arrive.  It was so colourful and all fit neatly in a little pot.  I actually really enjoyed this one because the eel was so soft, tender, and delicious with the teriyaki sauce.  The slight sauce that mixed into the rice was really good as well.

Unfortunately, there were only two skewers of the Curried Baby Octopus, but the small piece that I did have was so delicious!  The baby octopus was smooth and tender and wasn’t chewy at all.  It was abundantly seasoned with a rich curry too. 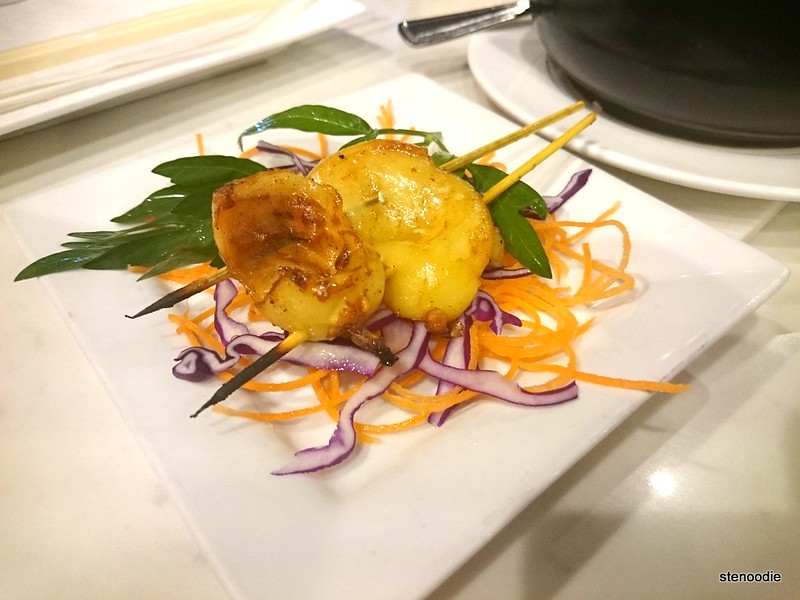 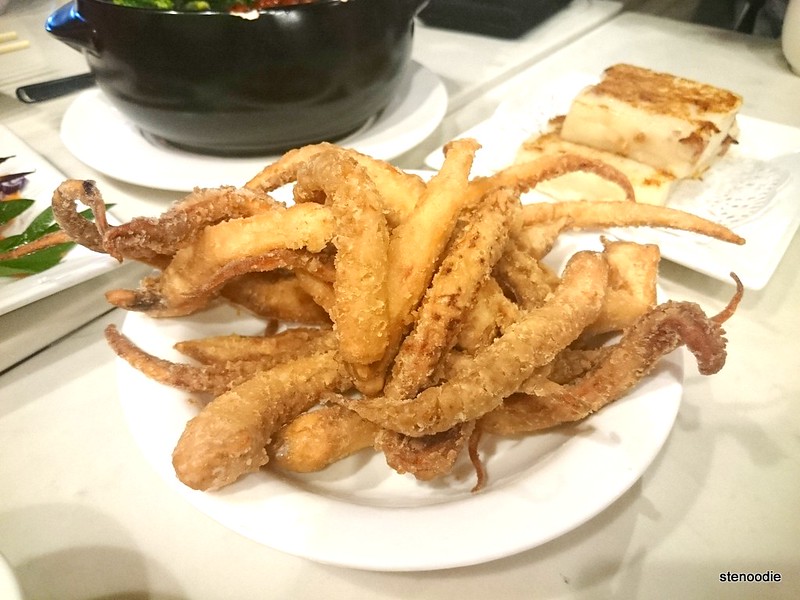 The Calamari (tentacles) were perfect!  I loved how it was so lightly battered and fried.  Underneath the thin layer of batter, you could taste the juicy octopus tentacles.  This was really good and there was a lot of it too!  (It was best to eat it while hot because it became hard when cooled down.)

The Turnip Cake was nothing too special as it resembled traditional Chinese dim sum turnip cake.  It was good! 🙂 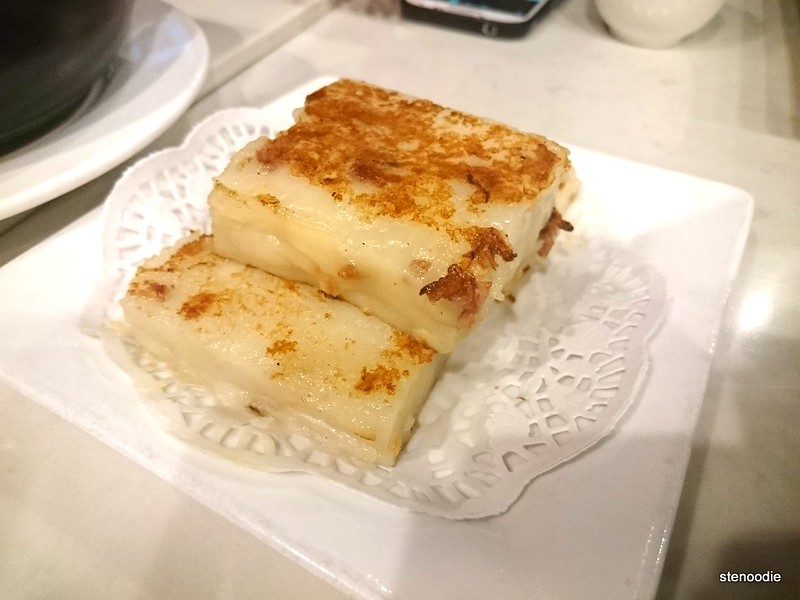 The “Har Kau” Shrimp Dumplings were good.  The shrimp inside the dumpling was huge! 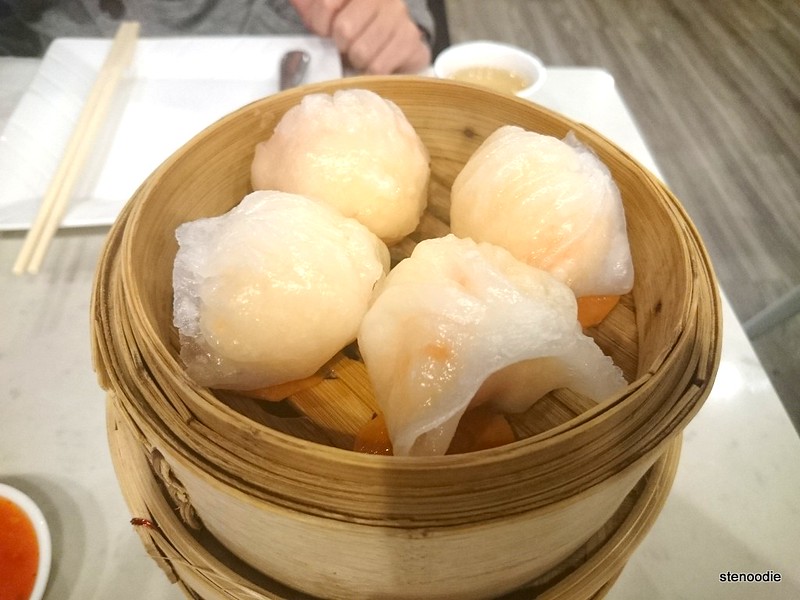 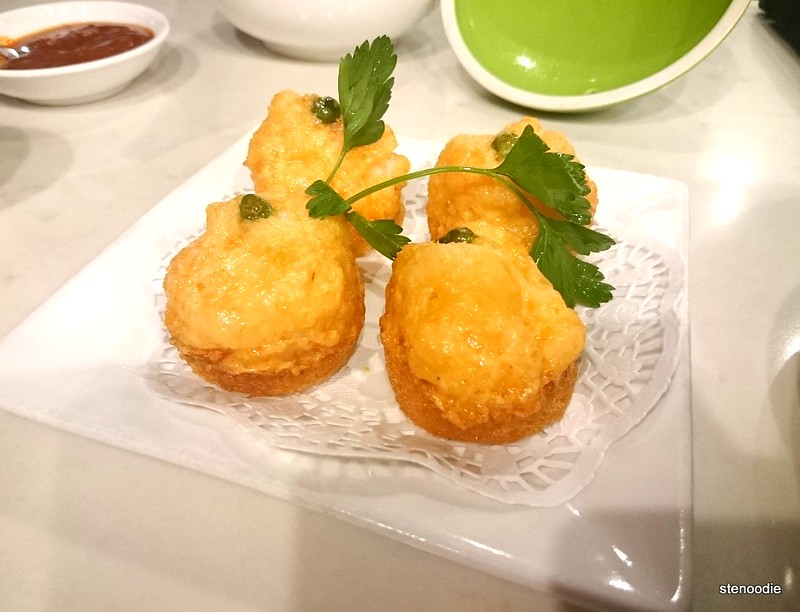 I was very curious about the Shrimp Toast.  Seeing it on the dim sum list immediately made me want to try it.  It spurred my memories of having a wonderfully delicious and unique Shrimp Toast at R&D Restaurant so that’s why I wanted to see how this one would be made.

To my surprise, the Shrimp Toast dim sum arrived as an entire shrimp fried on top of a toast together.  This made it so crispy to bite into and was a unique dim sum to try.  This was one of the dim sum that Emily recommended. 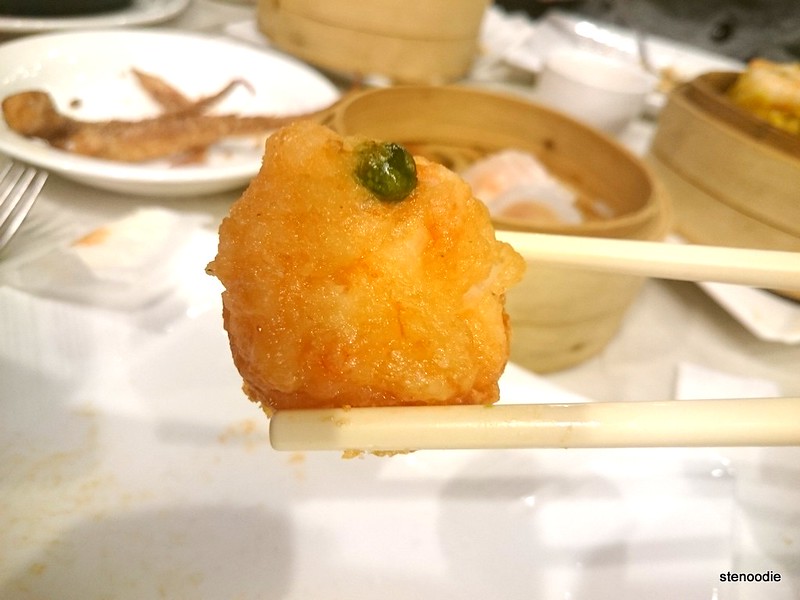 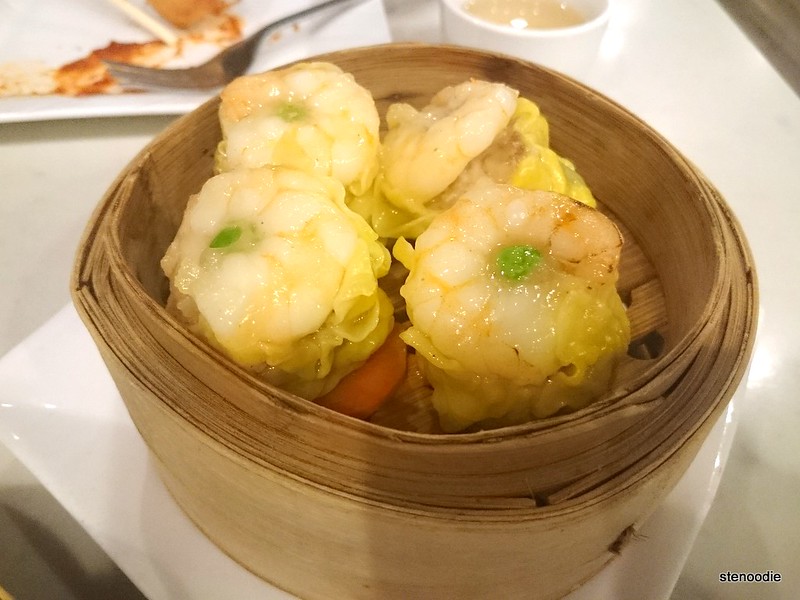 Yet another dim sum classic is the BBQ Pork Buns.  I haven’t had these in a long time because I just don’t care to eat them that much when I’m out at a regular dim sum outing with family.  I liked these ones at Pearl King though.  The BBQ pork inside of the bun was moist and tasty and the overall bun was good. 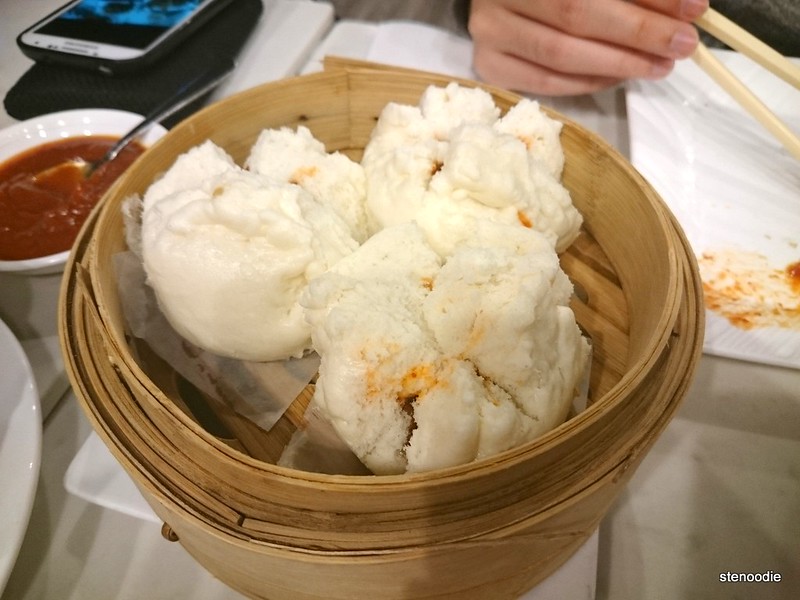 And there we have it.  All eight dim sum dishes blogged about with photos.  We were there from just after noon until 3 p.m. because we were doing a heavy catch-up session and engaging in some good discussions.  Other than that, the food had arrived in a good amount of time that we could have been done by 1:30 p.m. or 2 p.m. if we had intended to leave promptly. 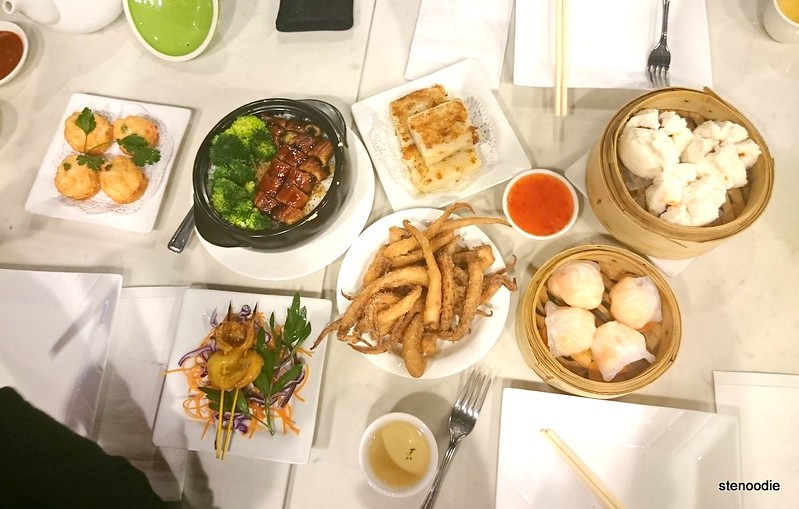 A beautiful spread of dim sum on our table 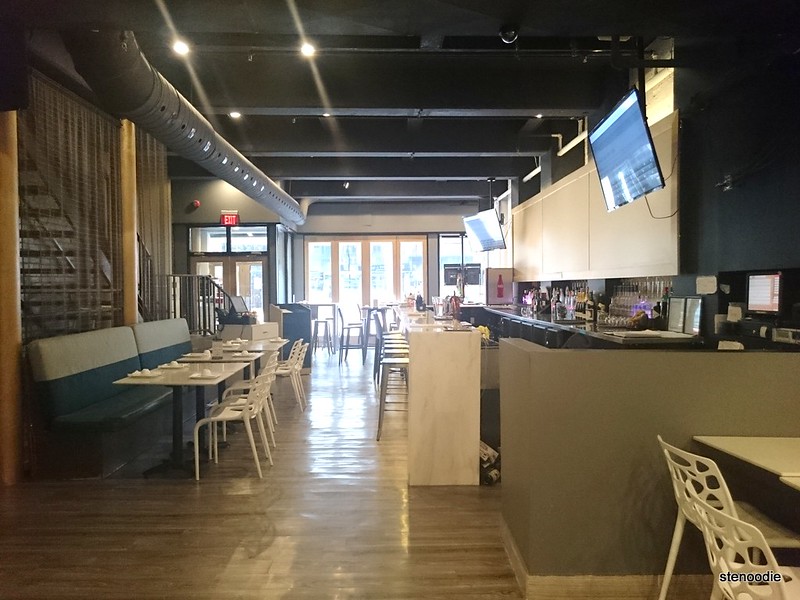 Near the end of our visit, we were the only customers in the restaurant

This was my first time having dim sum downtown as I usually go to Chinese restaurants in uptown Scarborough, Markham, or Richmond Hill.  Have you been to Pearl King before for their dim sum?  What was your experience like?  At the time of writing, there are two more days before the Groupon deal expires.  Perhaps when you read this, it will already be a thing of the past.  Nevertheless, I’m sure you might want to try this restaurant out without a Groupon if you want to pay a more premium price for downtown dim sum (yes, it is pricier than the uptown Chinese dim sum places).

Leave your comments below! 🙂