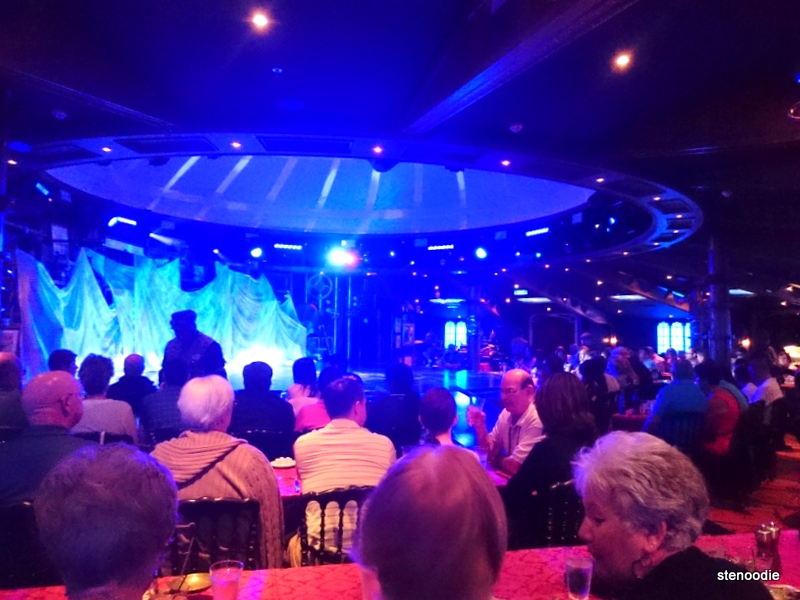 Illusionarium on board the Norwegian Getaway cruise ship

I love magic shows!  So when I found out that there was a specialty entertainment magic show on the Norwegian Getaway cruise, specifically designed for the ship, I was so eager to attend!  On the second last day of our Norwegian Getaway seven-day cruise trip, three of my friends and I went to go watch it after dinner.

The Illusionarium show was housed in its very own custom designed dome theater inside the Norwegian Getaway cruise ship!  If you are cruising on this ship, I think you should really go to see it because it is such a special show for this cruise ship. 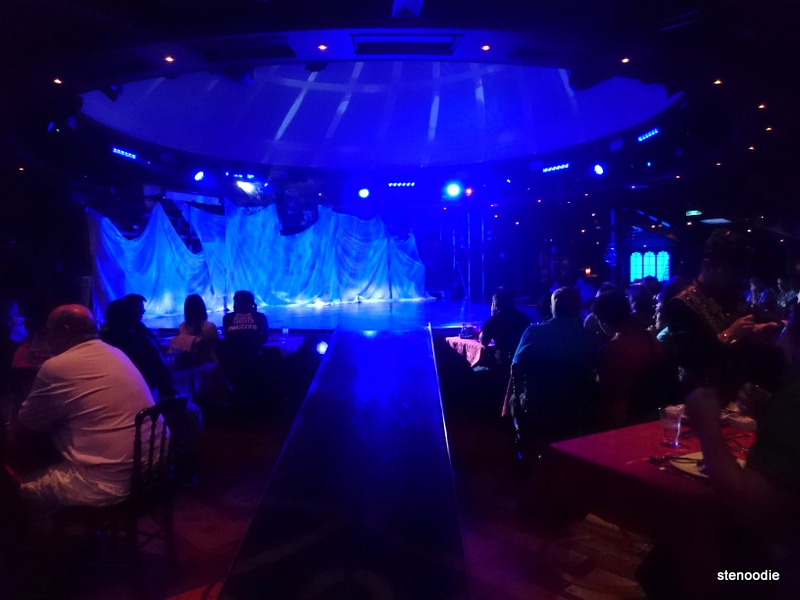 Dome theatre on board the cruise ship

The price of the Illusionarium show was not included as part of the regular cruise room price.  (Price per person: Floor Seating: $29.99 or Banquet Seating: $24.99.  We booked the floor seating).  You will have to book it yourself using one of the self-automated screens on the ship (these were so convenient and easy to use, by the way!) or at the theatre reception deck or online before you board the ship.

We booked the 8:45 p.m. show.  The show included a three-course prix fixe fine dinner in addition to the actual magic show.  Even though we knew this already, we still had dinner with the rest of our friends as part of our normal dinner routine at the Taste Dining Room.  (So yes, that night we actually had two dinners XD). 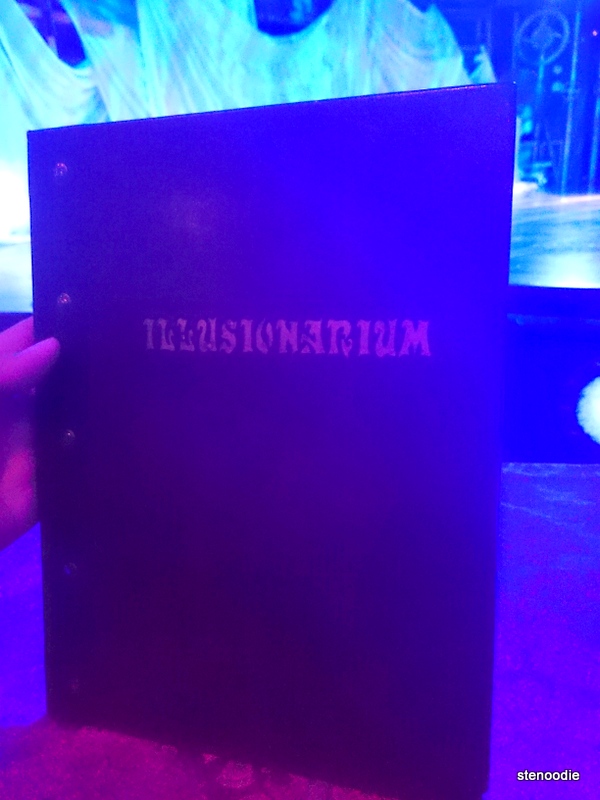 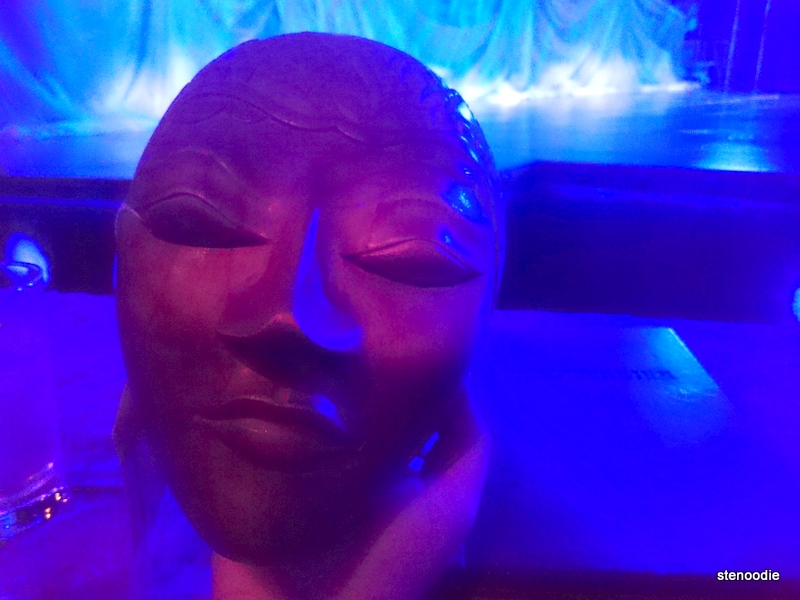 One of the props at our table

There was no fancy dress code required for the show as Norwegian Getaway cruise line loves their “freestyle cruising” slogan of running the ship.

We showed up at the Illusionarium theatre on Deck 6 before the 8:15 p.m. start.  We were the first to get there and after the host logged our key cards in, we stood around waiting for a bit before we were allowed in. 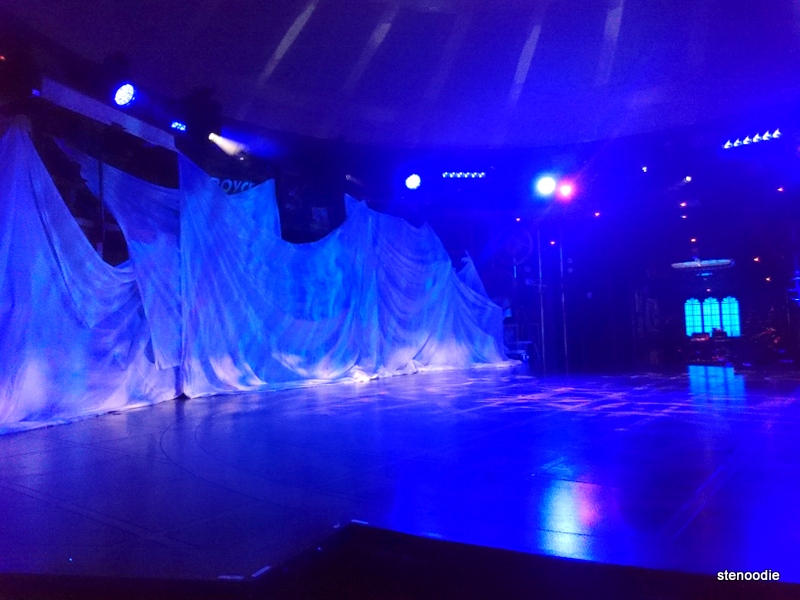 The view of the stage from our floor seats

Since we were the first to go in, we were given seats at the very first row of the show!  It was a huge dimly lit theatre where all these single-row tables lined up to face the stage.  The stage was a big round one with ample space for actors to move around.  There were some things hidden behind a large canvas.

We were served our second dinner very soon after we sat down!  Since my friends and I were still so full from our first dinner, we actually decided on sharing the main course (so as to not waste food and also because we weren’t even hungry… XD).  Also, please pardon the poorly lit photos.  The lighting in the theatre was all purple and pink. 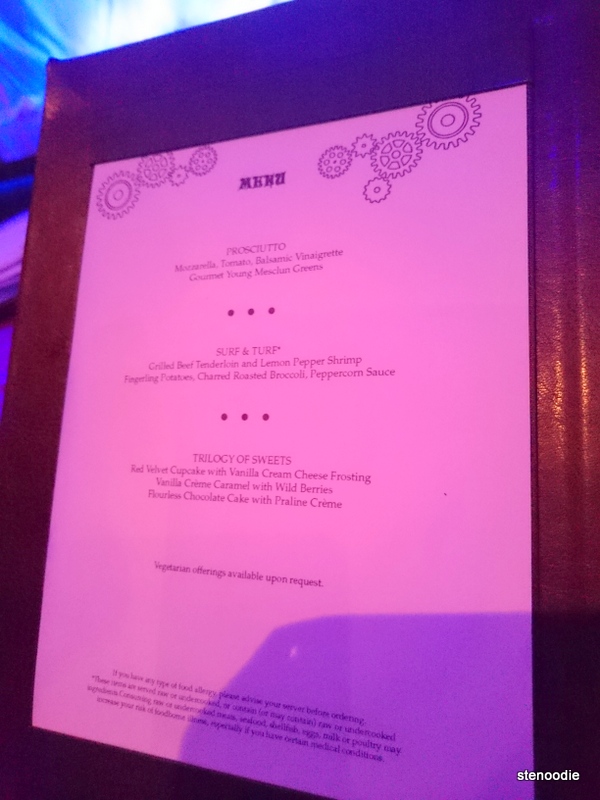 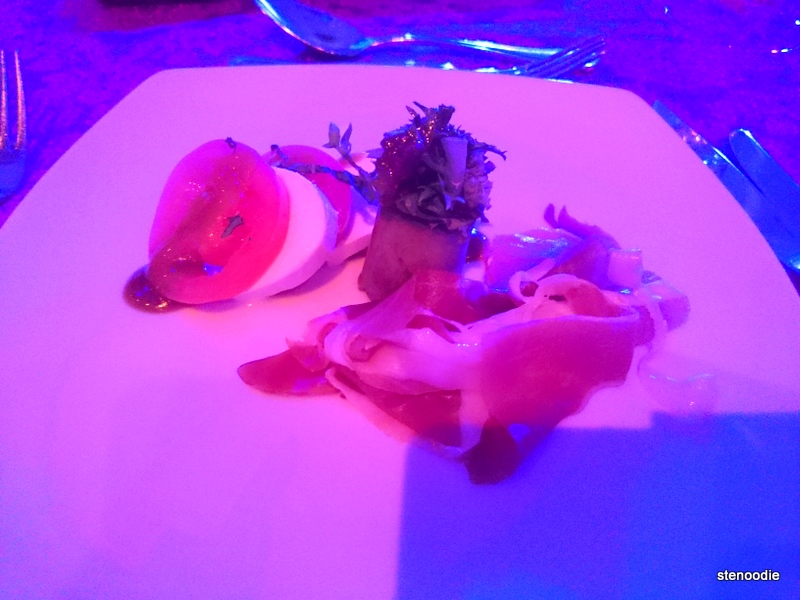 The first course was Proscuitto with mozzarella, tomato, balsamic vinaigrette, and gourmet young mesclun greens.  I loved the thiny sliced proscuitto.  It was so good and not too salty!  Yum!  I also liked the mozzarella and tomato.  The tomato was so fresh.  Yummy! 🙂

The second course was a Surf & Turf.  It was a grilled beef tenderloin and lemon pepper shrimp with fingerling potatoes, charred roasted broccoli, and peppercorn sauce. 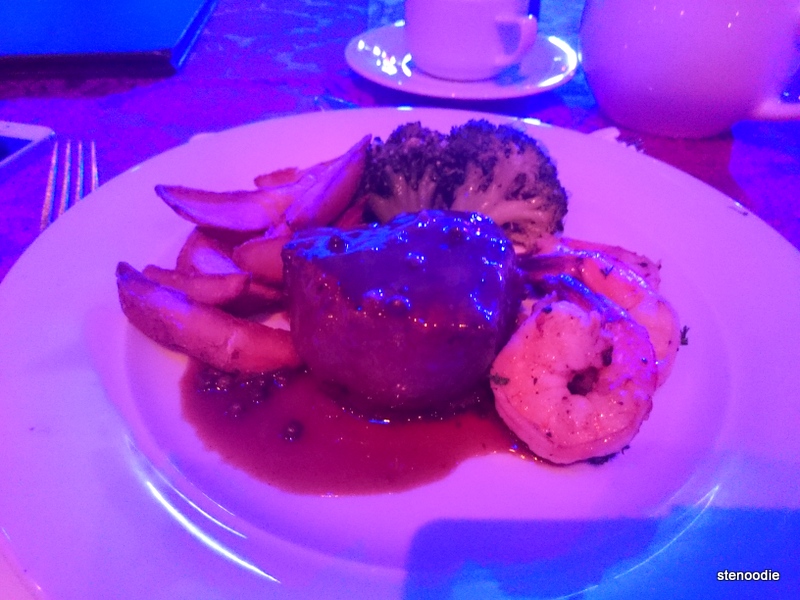 The grilled beef tenderloin steak was actually really, really good!  It was grilled just right.  The lemon pepper shrimp was firm but salty.

By this point after we had received our second course, the show had begun.

I’m not going to tell you all the magic components that were part of the Illusionarium show as that would spoil the fun and secrecy behind the show.  All I have to say is that there was a story line where the magical components were linked into and there were various elements of magic that were performed such as telepathy, levitation, prediction, escape, and more. 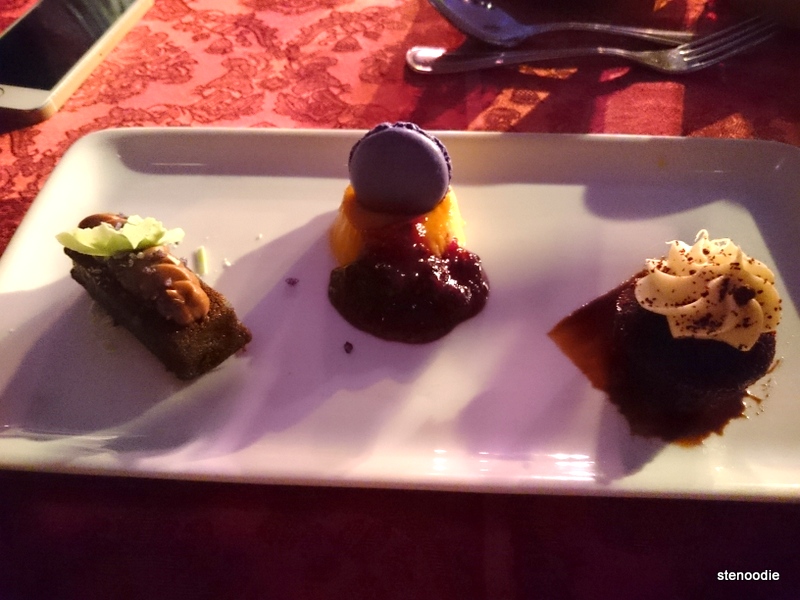 The desserts were small and nice.  However, I was just too full and simply took a bite of each one before I called it quits on the food.

The entire show finished too quickly and we were all left spellbound.  We left the show discussing the details of what we saw and wanted to know how they did specific elements because it really did seem like magic.  It was a great show! 🙂 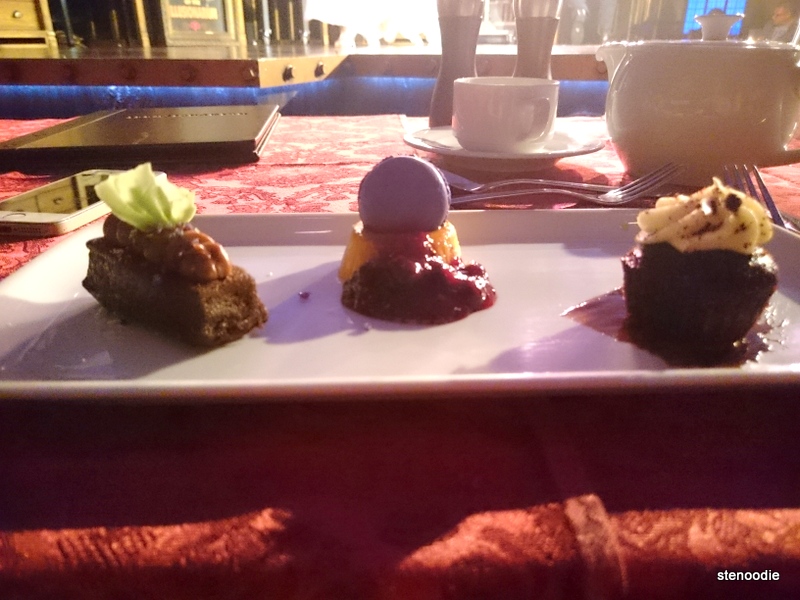 You can see part of the stage from this photo. It was level to where we were seating since we were in the front row

If you are planning to board the Norwegian Getaway cruise for a trip sometime, be sure to check out this show when you’re there! 🙂