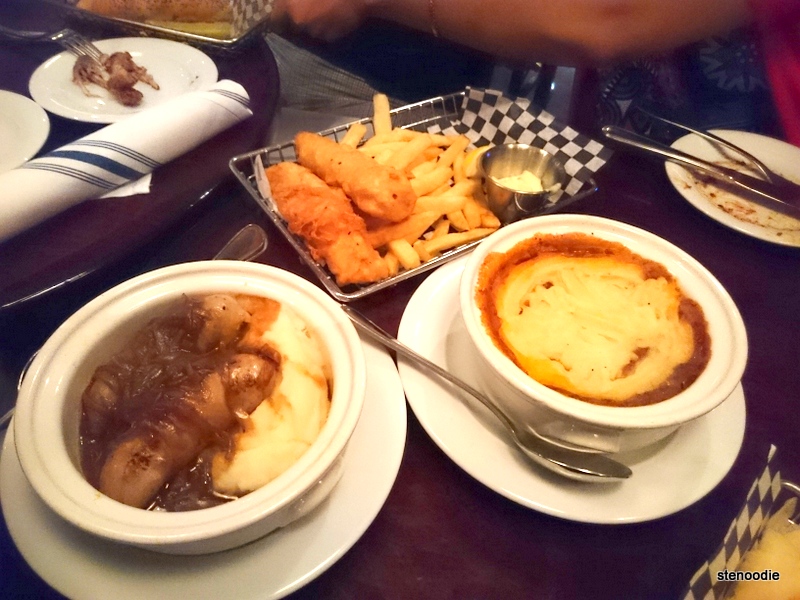 In addition to the dining rooms and specialty dining restaurants on board the Norwegian Getaway cruise ship, there was also a pub that we frequented often while on the ship for the seven days of our trip.

O’Sheehan’s Neighborhood Bar & Grill is a pub that serves Irish and American classics.   It was located on Deck 7 at 678 Ocean Place on the ship.  This was such a cool place to hang out because not only was the food really delicious but they were open for 24 hours on the ship and included a gigantic two-story screen for sports and movies.  I remember this was one of the first things I noticed when we first walked on to the ship on the first day. 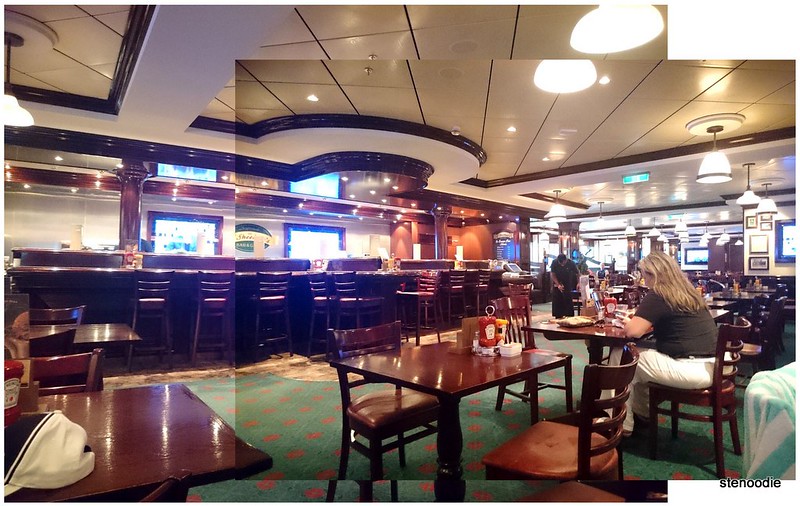 In addition to that, they also have billiards, darts, and arcade games!  You literally had everything that you could want in an entertainment zone here — food and fun.

For that reason, we actually stopped by to eat here on Day 3, 5, and 7 of our trip (yes, I was very meticulous and actually took note of which days we dined here). 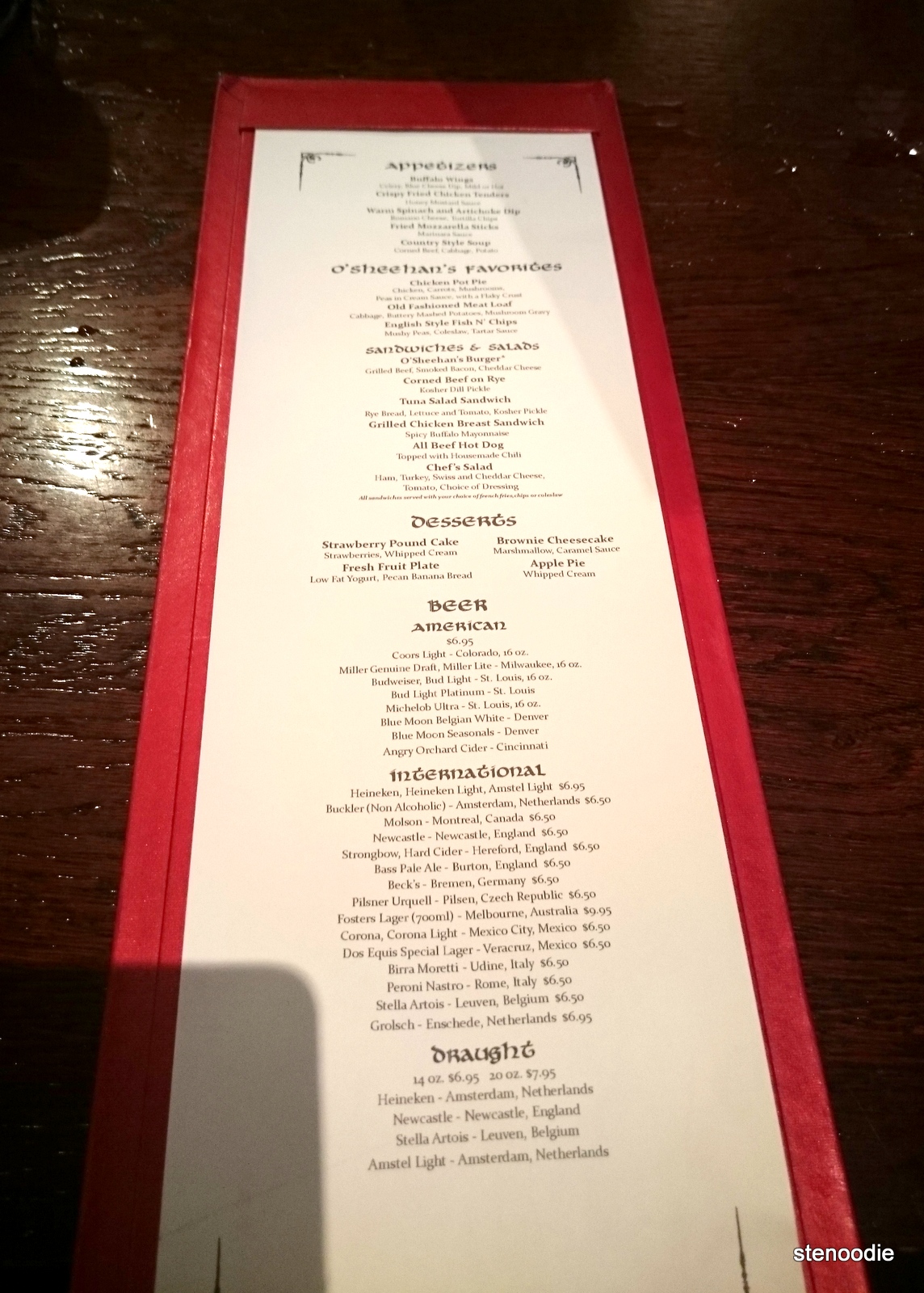 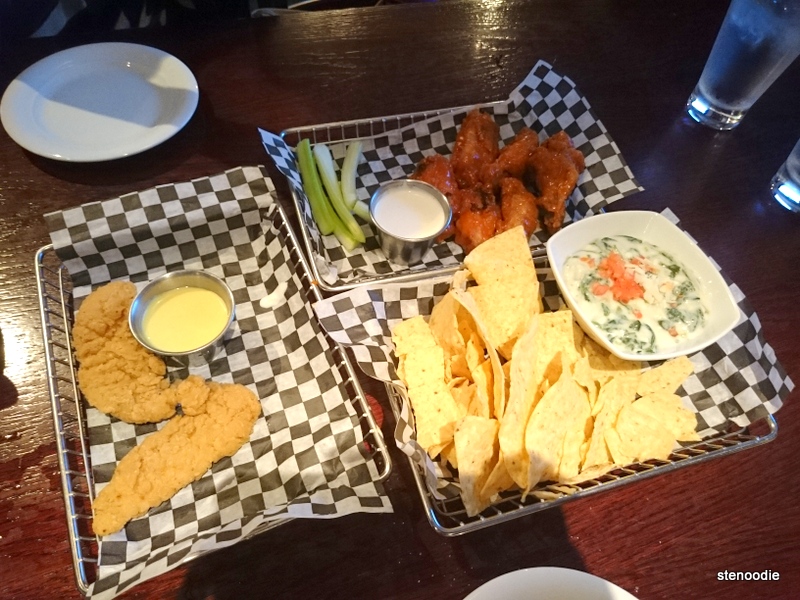 Our pub food on our first visit to O’Sheehan’s

On the first visit on Day 3, Melissa, Alice, and I went to O’Sheehan’s for our first time to eat some snacks since we had skipped lunch.  We ordered yummy buffalo wings, fried chicken tenders, creamy spinach and artichoke dip, and a brownie cheesecake. ^_^ 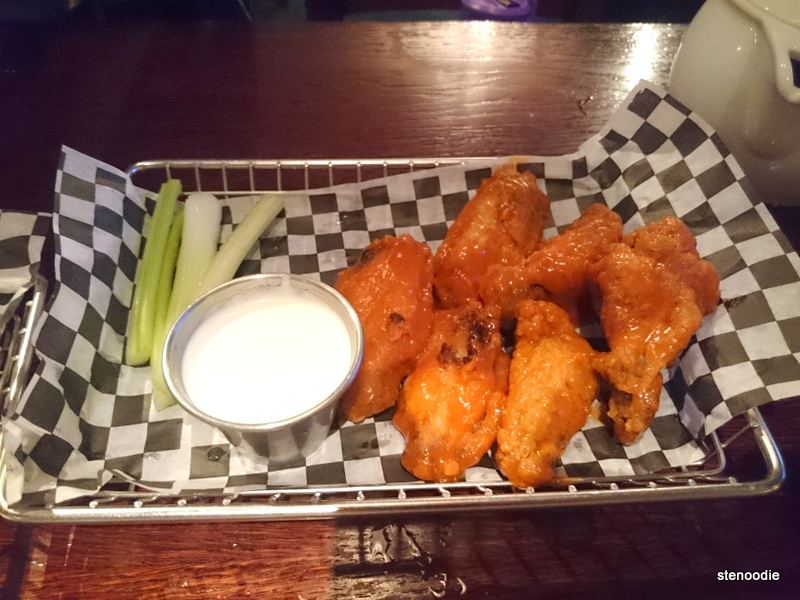 These Buffalo Wings were so delicious!  I absolutely loved the blue cheese dip too. 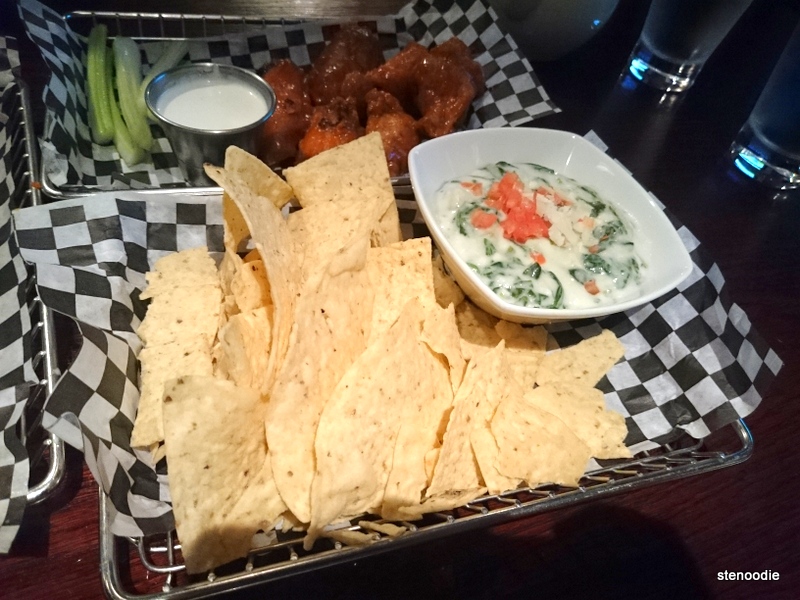 These tortilla chips don’t look the greatest but the Warm Spinach and Artichoke Dip was so creamy and tasty! 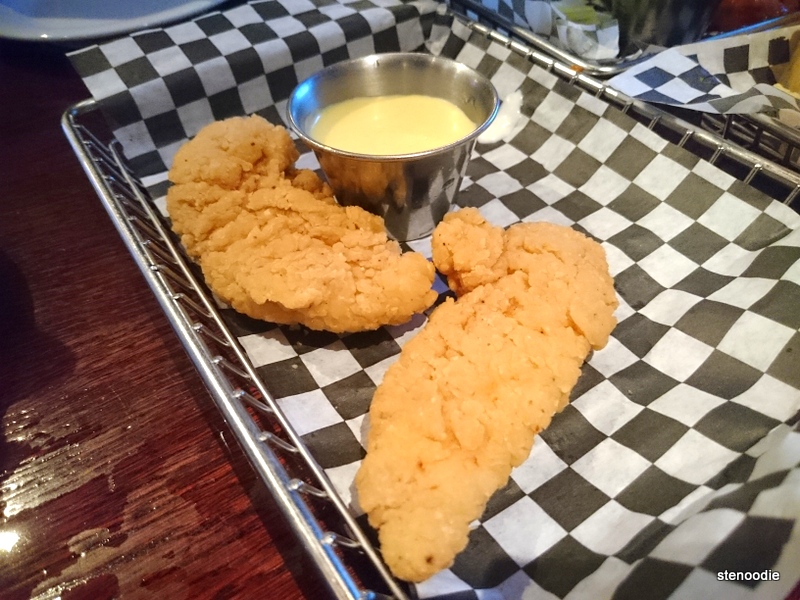 These Crispy Fried Chicken Tenders look very obviously frozen, but they actually tasted quite good.  The honey mustard sauce was good too. 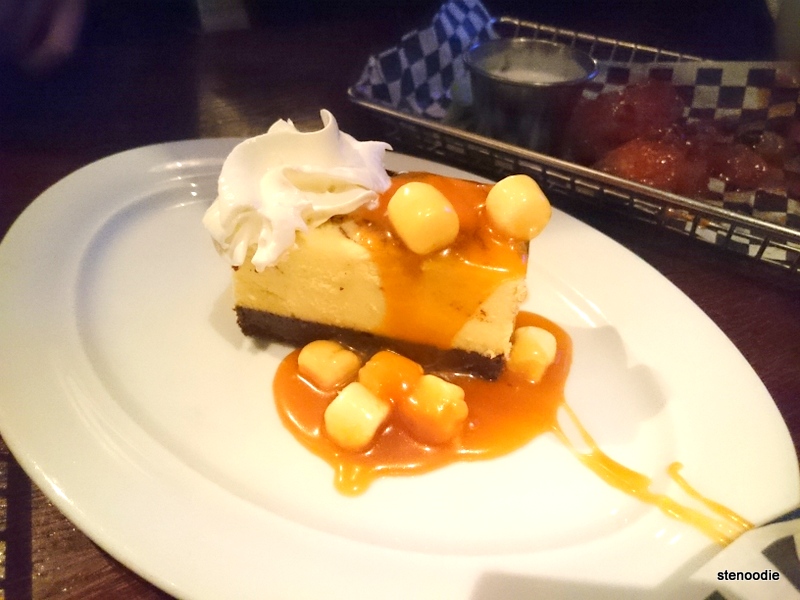 Yum!  This Brownie Cheesecake was good.  The soft marshmallows were a nice addition to the dessert.  The cheesecake was quite dense and sweet though. 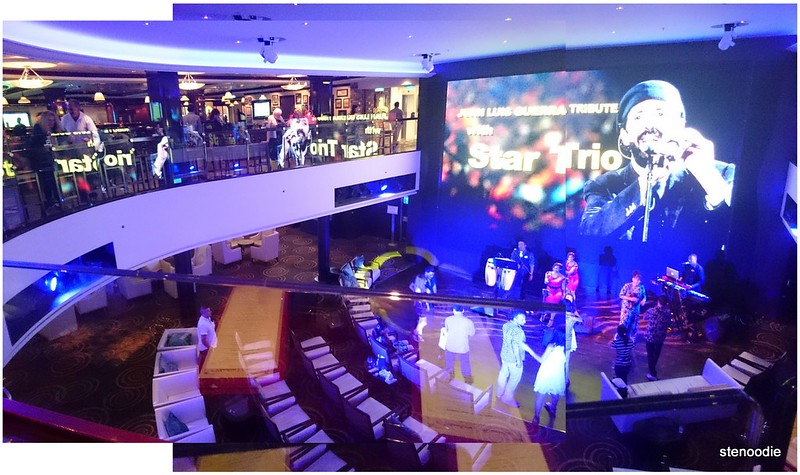 Our second visit to O’Sheehan’s came after we finished watching The Legally Blonde musical.  The movie called The Proposal was going on at 12:15 a.m. at night on the huge two-story screen and we all wanted to watch a movie together.  So we did!  We got some seats near the counter that faced the giant screen and ordered food to share.  We got Chicken Pot Pie, Fish and Chips, and the Buffalo Wings that we had on our first visit. 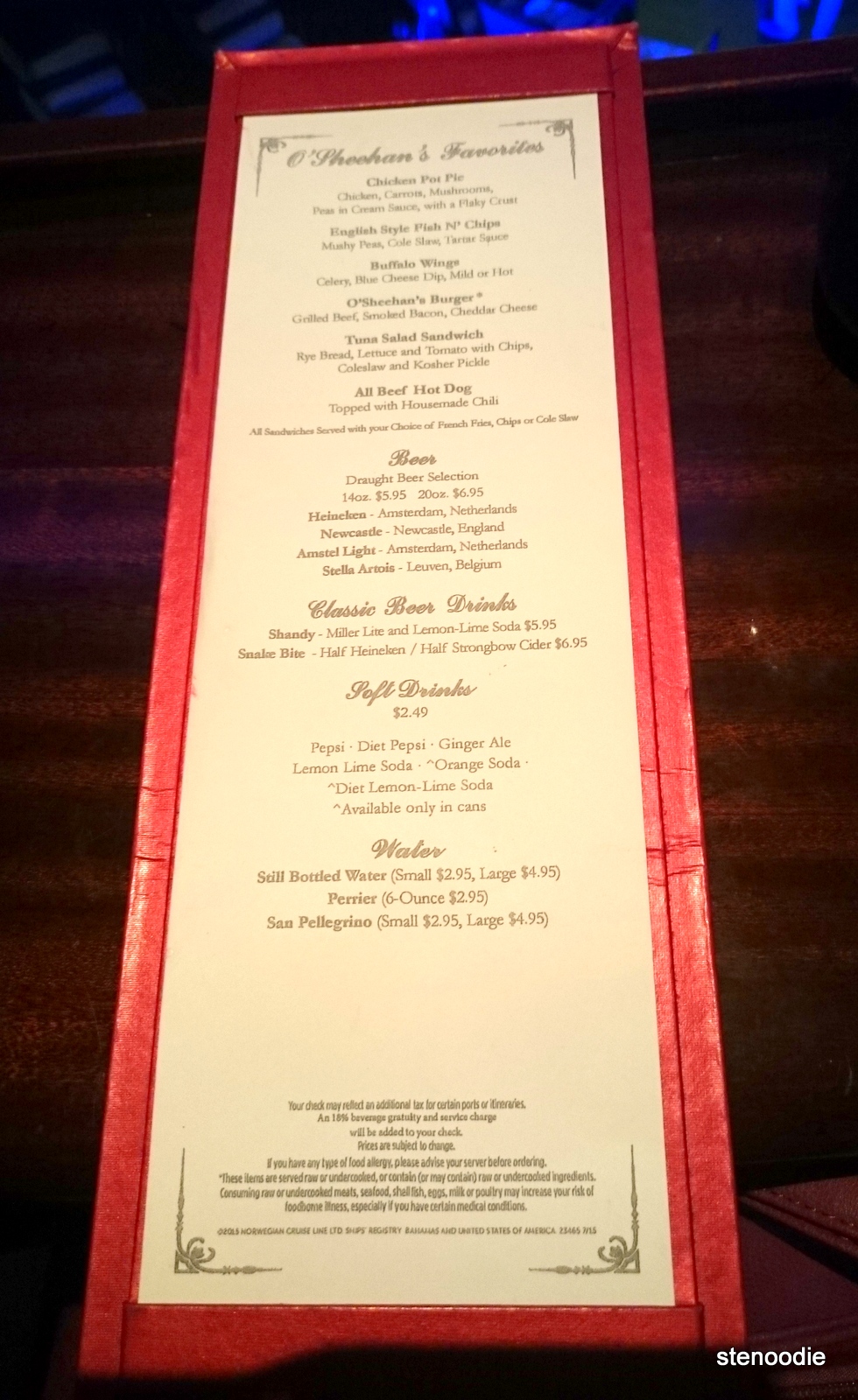 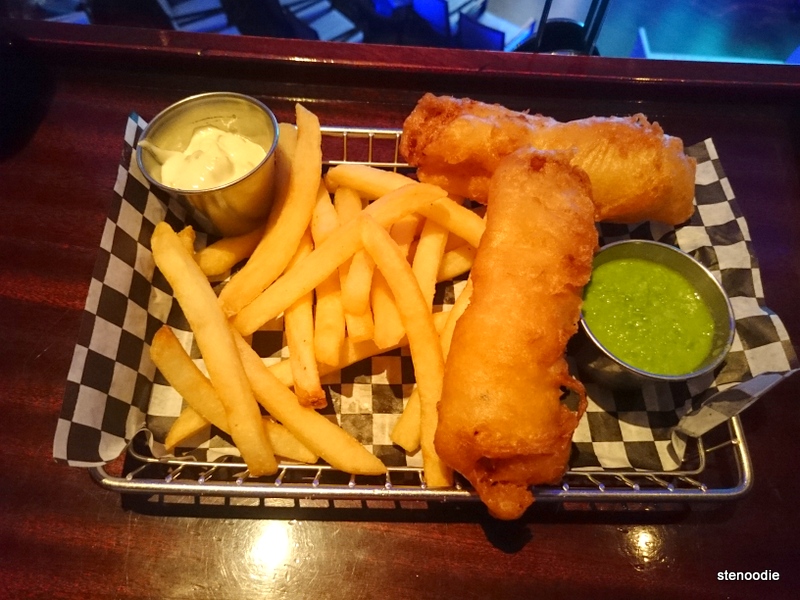 The fish and chips was soooo crunchy and well battered.  So good! 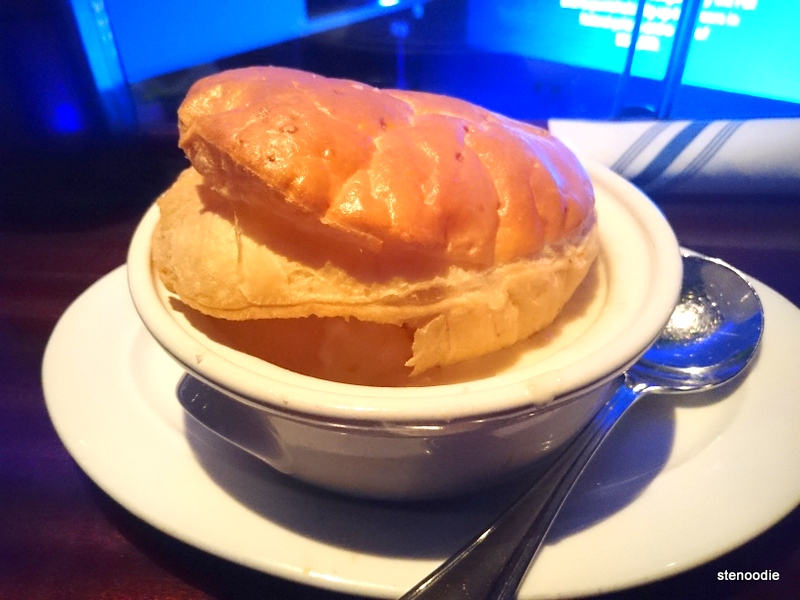 The chicken pot pie was very creamy, but I didn’t like the chicken too much. 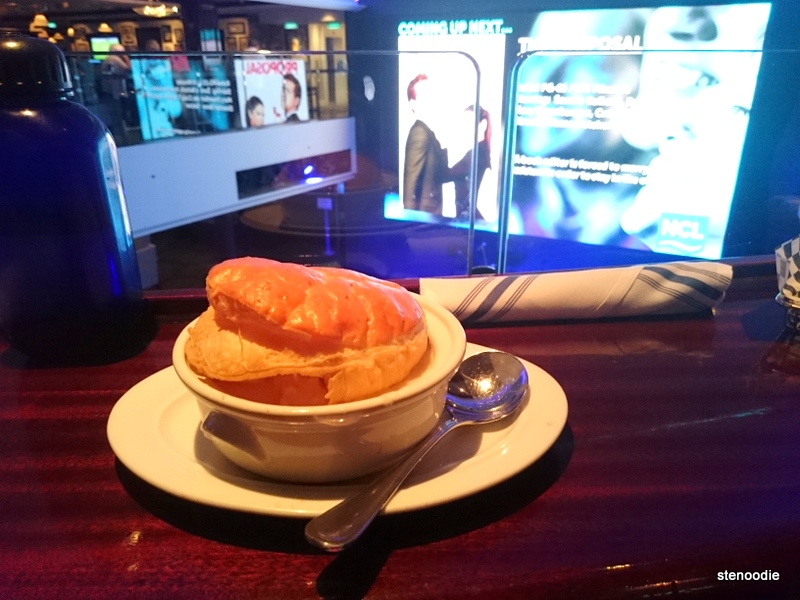 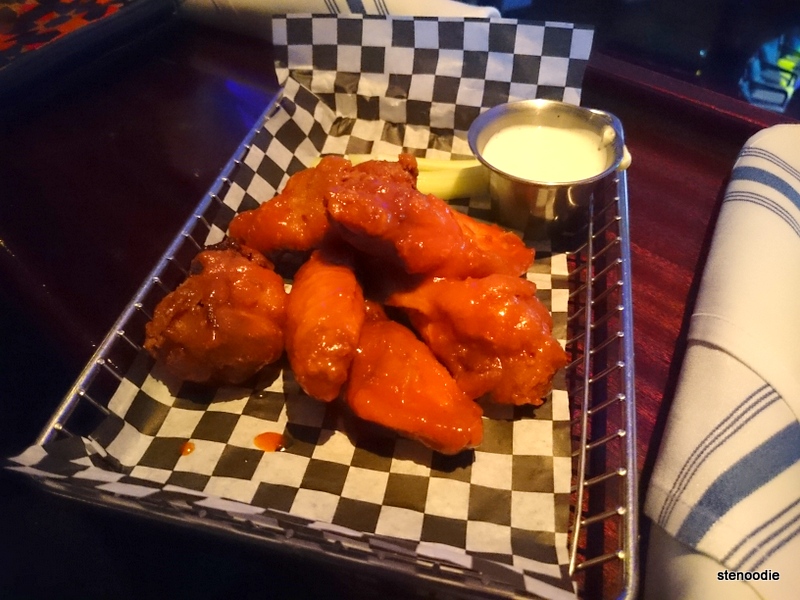 The Buffalo Wings were just as delicious as the first visit.

Our final visit to O’Sheehan’s came on the last day.  We went there for lunch instead of dining at the Garden Cafe buffet.  We were a bigger group this time and ordered more dishes to share. 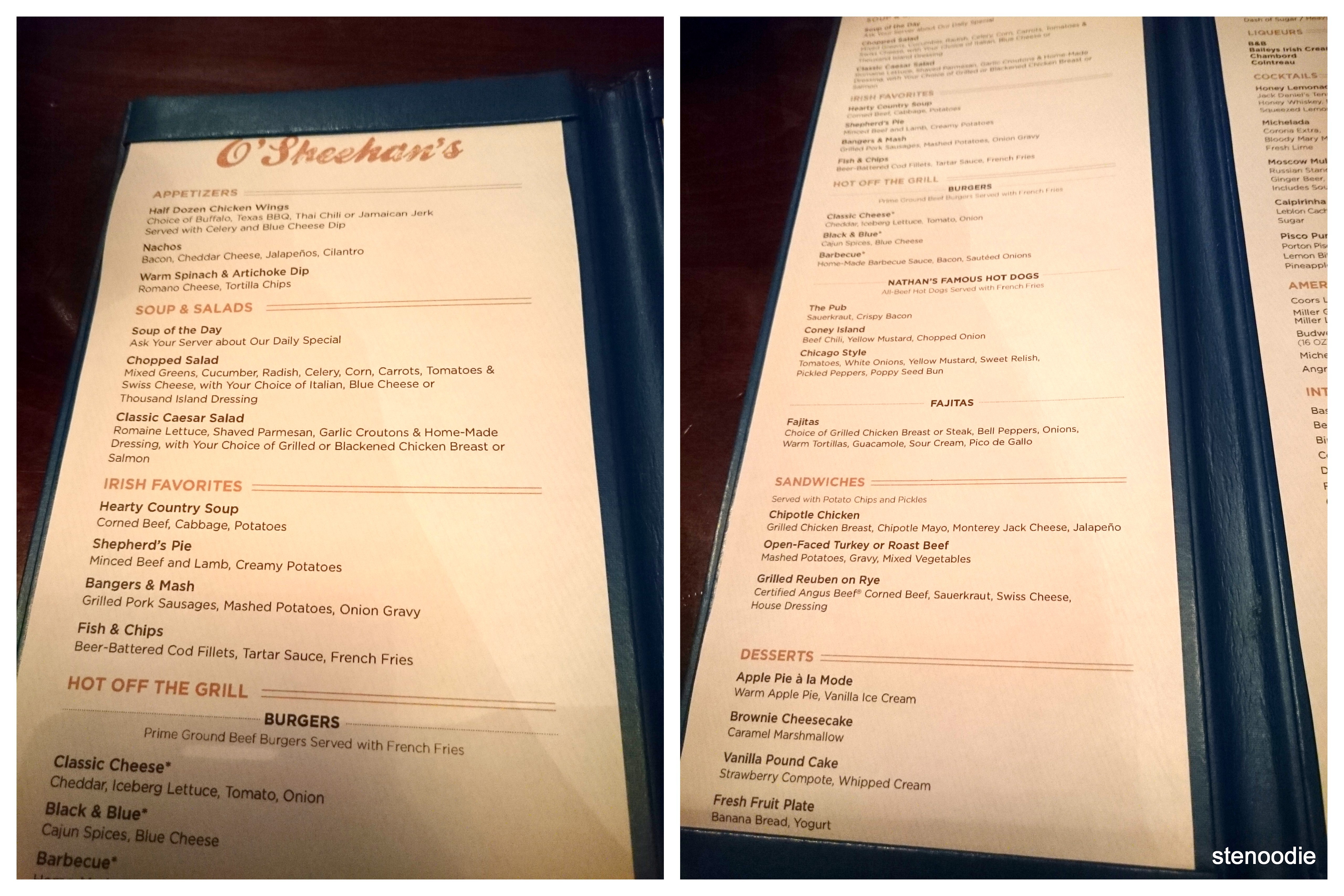 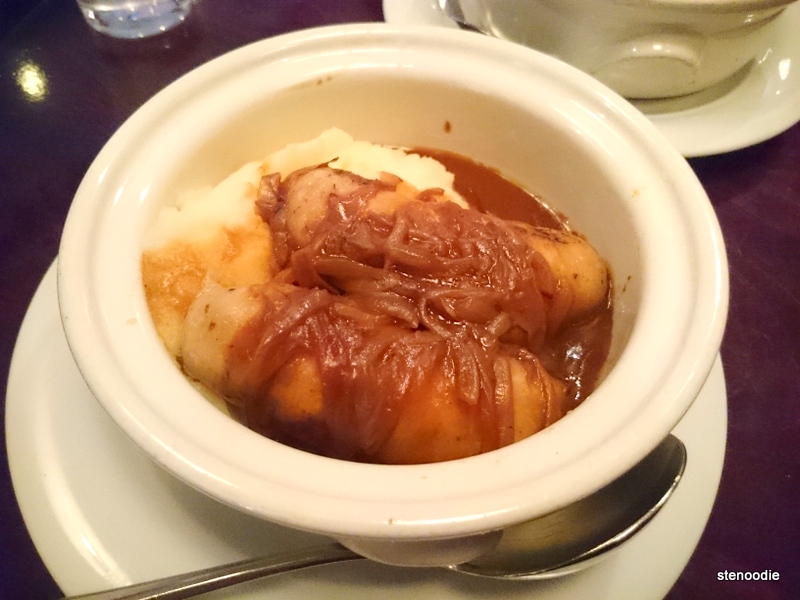 We shared a Bangers and Mash.  That was just okay. 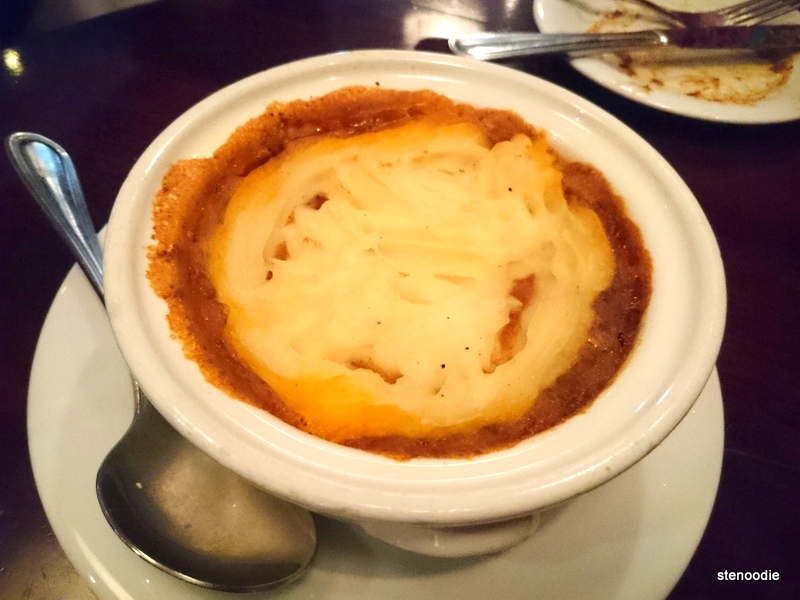 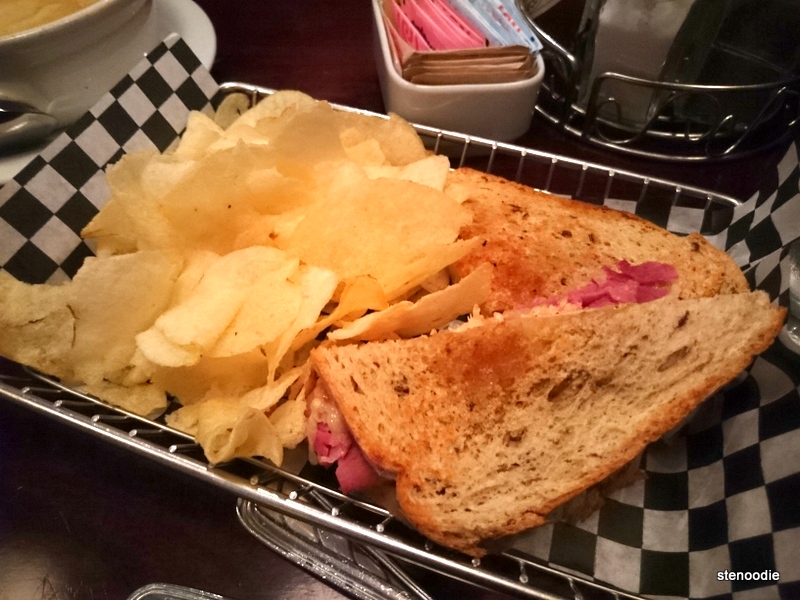 The Grilled Reuben on Rye sandwich made with certified Angus Beef corned beef, sauerkaut, and Swiss cheese was very, very good though. 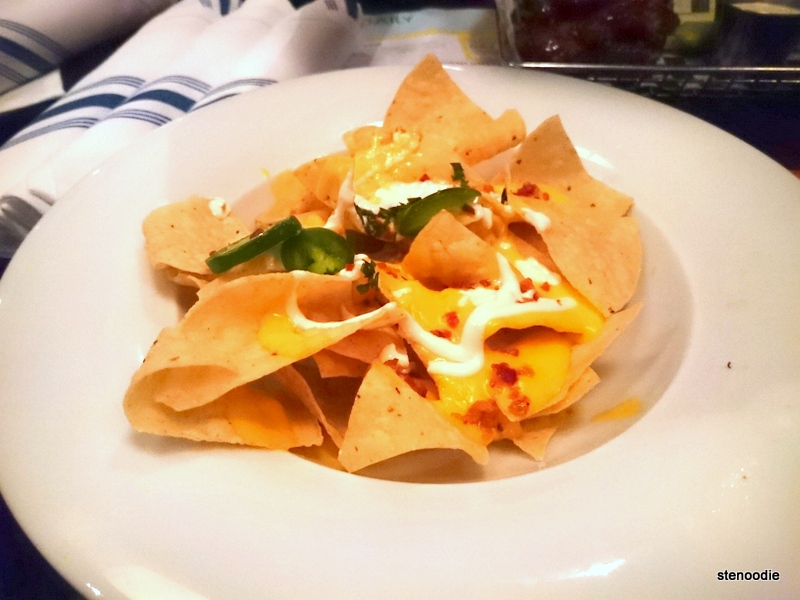 The nachos were just so so.  It was literally cold nachos on a plate with cheese slathered on top of it with not much flavour. 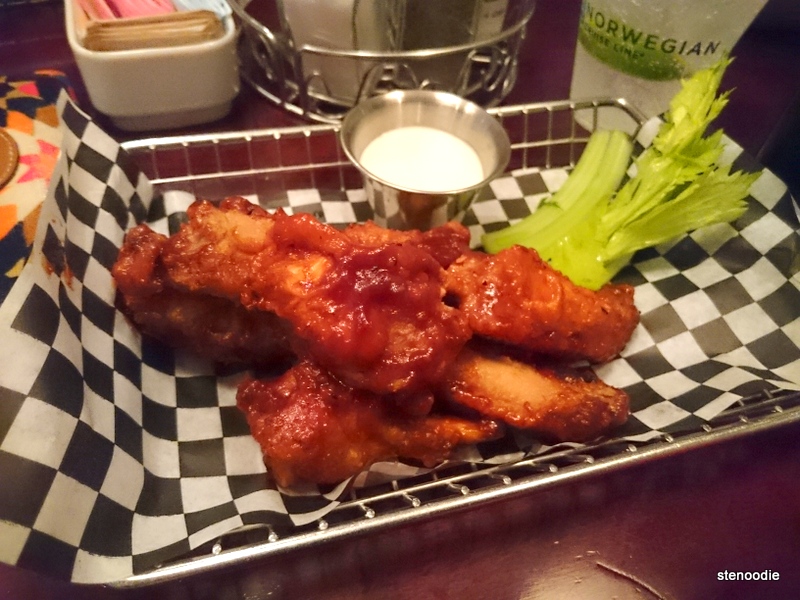 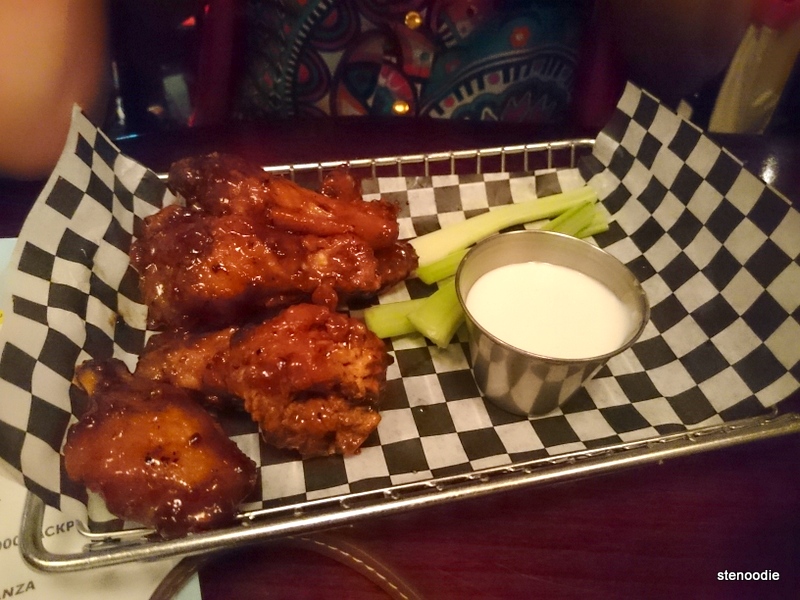 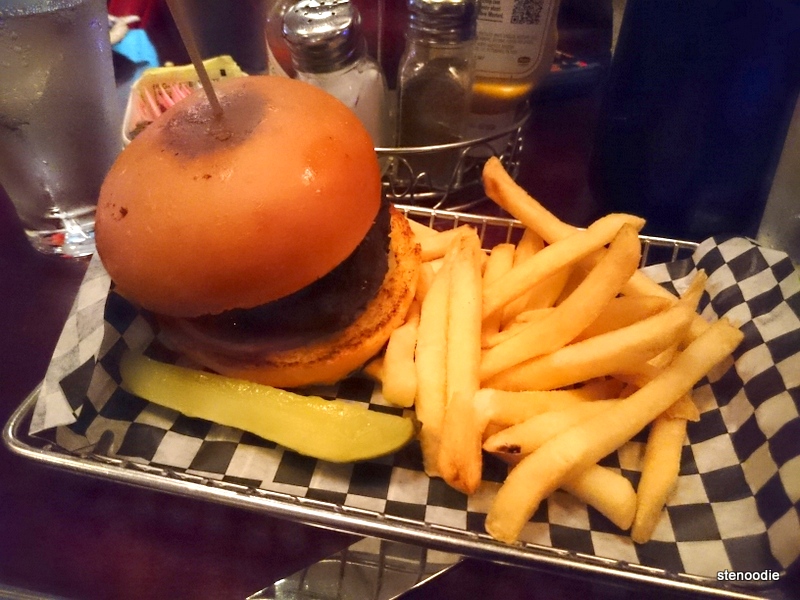 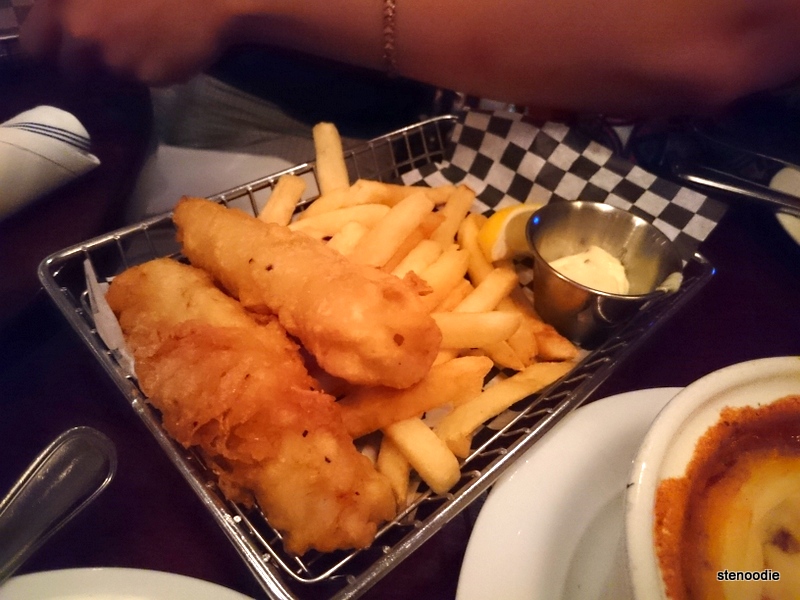 The other guys at our table got a burger and Fish & Chips too.

Since we had already tried the Brownie Cheesecake on our first visit, we ordered the rest of the desserts on the menu to try.  We got three desserts: Apple Pie a la Mode, Vanilla Pound Cake, and Fresh Fruit Plate. 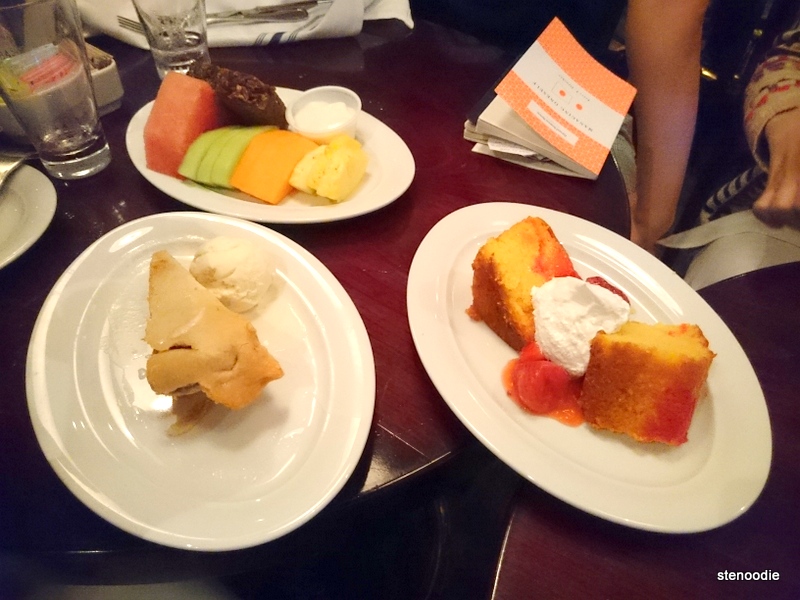 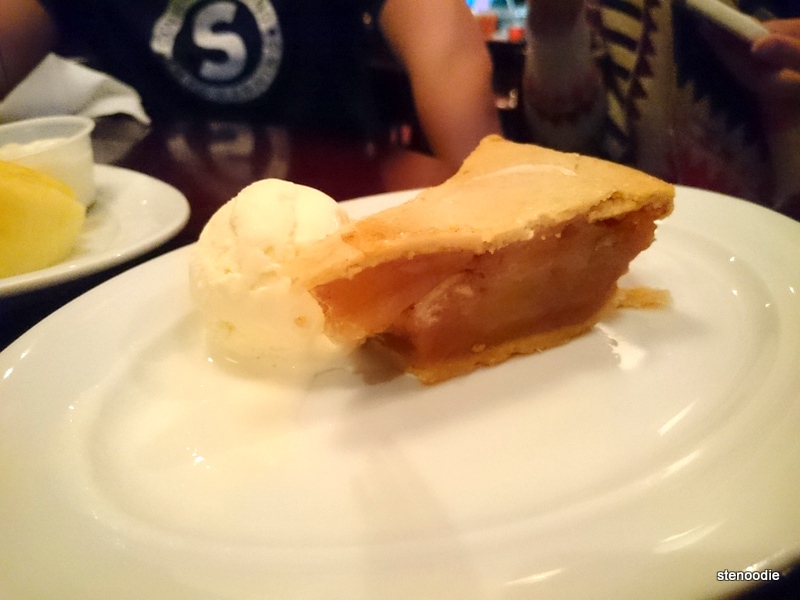 The Apple Pie a la Mode was really bad.. it was frozen, but the vanilla ice cream was good. 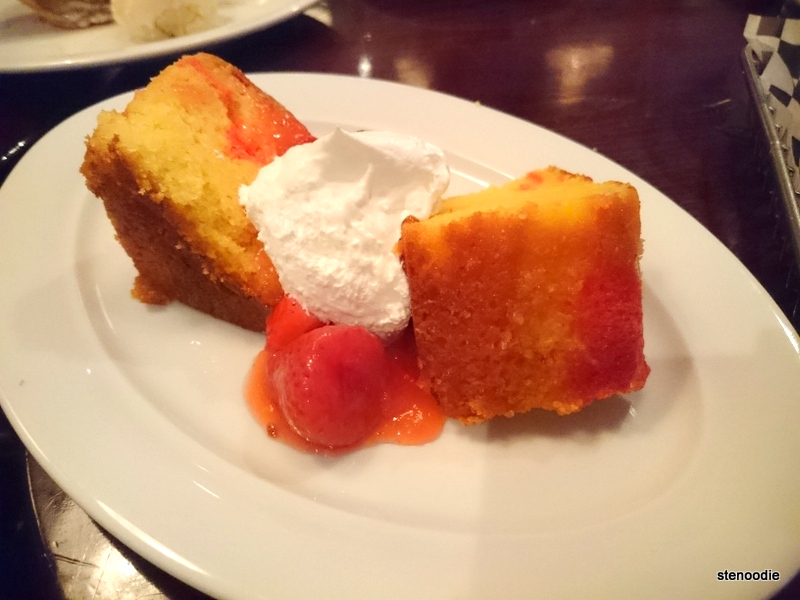 The Vanilla Pound Cake was good too but quite sweet. 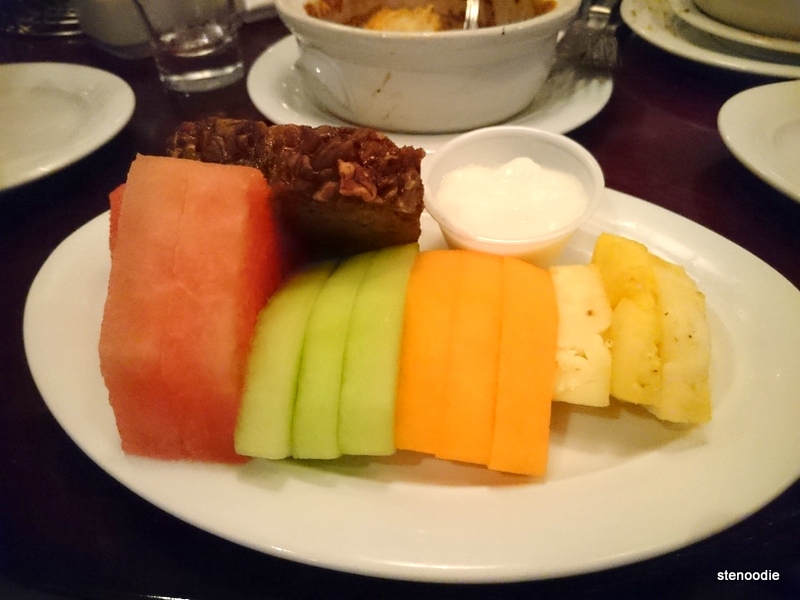 The Fresh Fruit Plate was so-so.  The fruits really weren’t that fresh (considering it was our Day 7 on board the cruise).  It came with a banana bread and yogurt.

Overall, O’Sheenan’s was a great place to hang out and eat food on the cruise!  It was very casual and so many young people hung out here during the day for a quick bite to eat. 🙂  Not all of the selections were delicious as some of the things were hits or misses but the wings and fish & chips were definite hits!