Posted on September 6, 2017 by stenoodie 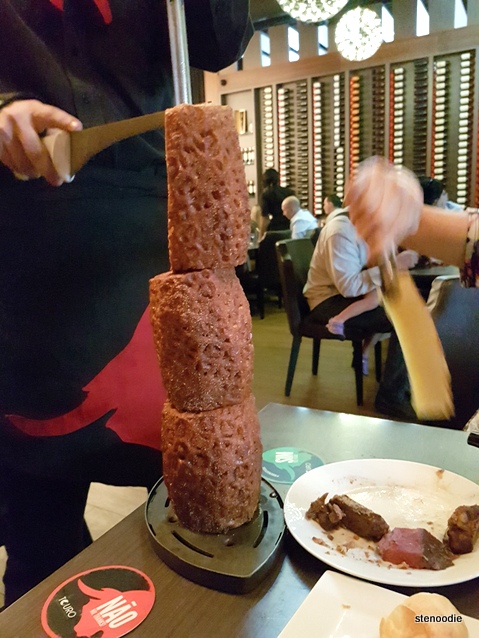 The final contest meal I won this summer was a meal for two at Touro Brazilian Steakhouse (Touro Churrascaria).  Thanks to Jackie of @theeverydayfoodie who hosted the Instagram contest, I was selected as a winner to enjoy this complimentary meal.  Yay!

I had dined at another Brazilian steakhouse before; that of Copacabana Brazilian Steakhouse located in downtown Toronto.  Thus, I had a general idea of what to expect already.  A Brazilian steakhouse restaurant is where there are servers called Gauchos who bring various cuts of meat like chicken, beef, and lamb on a skewer to your table.  If you want to take it, then you take your tongs to clamp a piece while the Gaucho slices it it on to your plate.  It’s a unique table-side service for all-you-can-eat meat!

I decided to bring my mom with me since she had never experienced a Brazilian steakhouse restaurant before.

Touro Brazilian Steakhouse was located at 125 York Boulevard at Leslie and Highway 7 in Richmond Hill where there are a number of other big name restaurants too.  I had called ahead of time to make reservations for our dinner at 5 p.m. on a Saturday evening.  I made sure to inform them that it was for a contest prize redemption and the female on the phone was friendly and able to take down my reservation seamlessly. 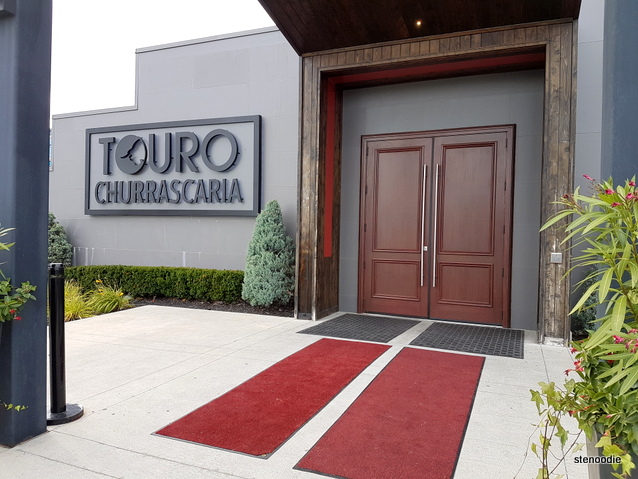 Grand entrance with a red carpet too! 😛

When we arrived to the sleek restaurant, the hostess greeted us and led us to our table.  At first, she led us to a table that was in the corner of the restaurant where a superfluous door was; which also let in a lot of light from the outside parking lot and in stark contrast to the dimly lit and upscale feel of the rest of the restaurant.  I requested that we be placed elsewhere.  There was no problem with this and we were led to a table in the middle of the restaurant instead.  This was much better!  I wanted to see all of the Gauchos walk around serving meat, which was definitely part of the experience of being at a Brazilian steakhouse.  I’m glad that we got a better table after all. 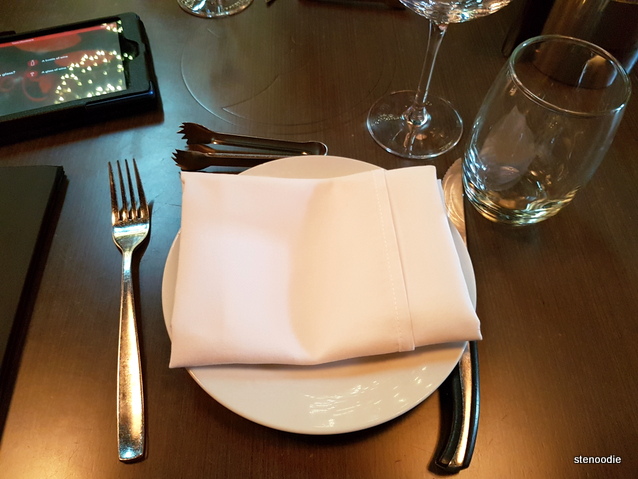 Before our server arrived, I reiterated again to the hostess about the meal being a comped one.  I didn’t want to have any awkward situation come up where the comp wasn’t acknowledged — I have bad experiences about this in prior contests/tastings unfortunately.  However, the hostess reassured me that our server would be informed.  Yay!  This was great and our server ended up taking great care of us that evening. 🙂

When she arrived, she took our drink orders.  The prize for two also included some soda drinks so we asked for cola.  Since we had never been here before, she explained to us a little bit about how the restaurant worked.  There was an “Appetizer Island” in the middle of the restaurant where we were free to select from the hot and cold dishes a la buffet style.  When we were done selecting from the Appetizer Island, we could return to the table and show our “Sim” or “Não” signs in order to indicate to the Gauchos whether we wanted them to stop at our table to serve us meats or not.  I think this style of dining is so fun and interactive! 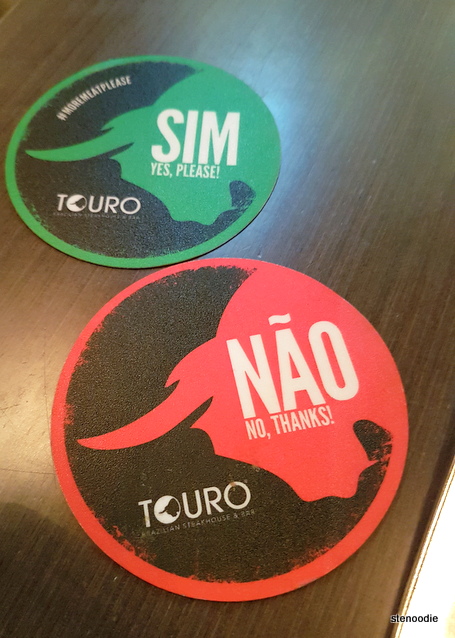 Rodizio cards with a red and green side 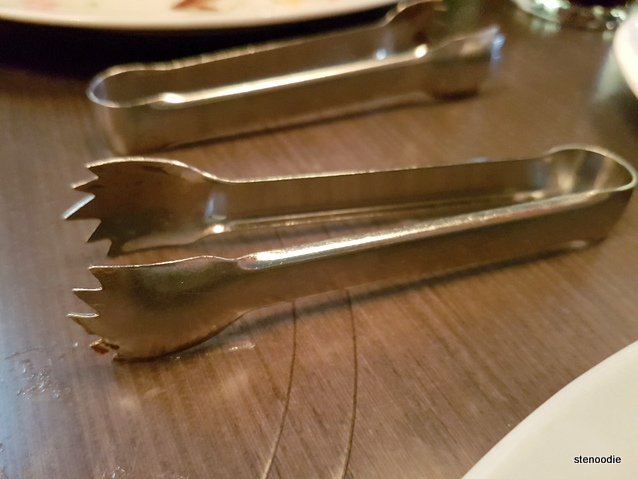 I took a few vegetarian options from the Appetizer Island like guacamole, artichoke, watermelon salad, grilled eggplant, cucumbers, and red peppers.  I definitely didn’t want to fill up on the appetizers. 😀 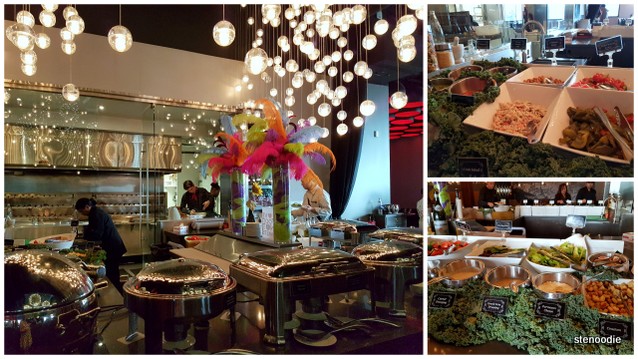 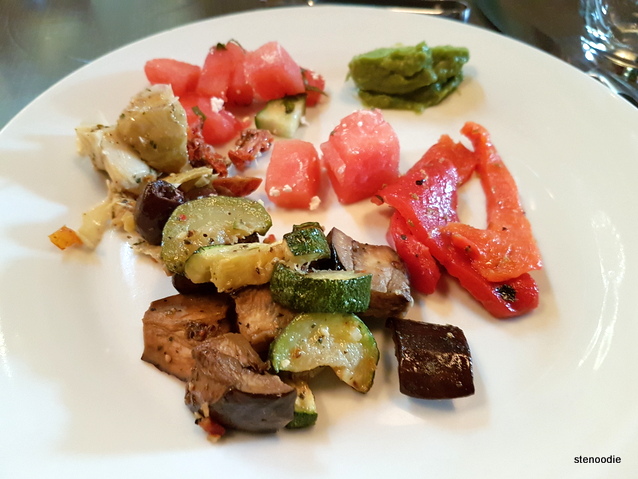 The small amount of veggies that I selected from Appetizer Island

Once we got back to the table, I displayed the “Sim” card and the Gauchos approached us right away with cuts of meat.  The first one was the Pork Ribs which was very a very large piece and very tasty.  The meat on it was nicely seasoned and tasted good.

The Leg of Lamb was fairly good too and not too rough at all. 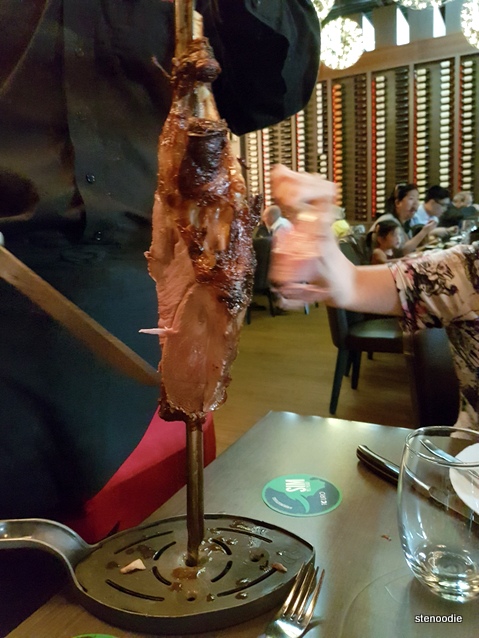 I had to flip the card over to the red side to pause and eat first since the meats were coming so quickly. 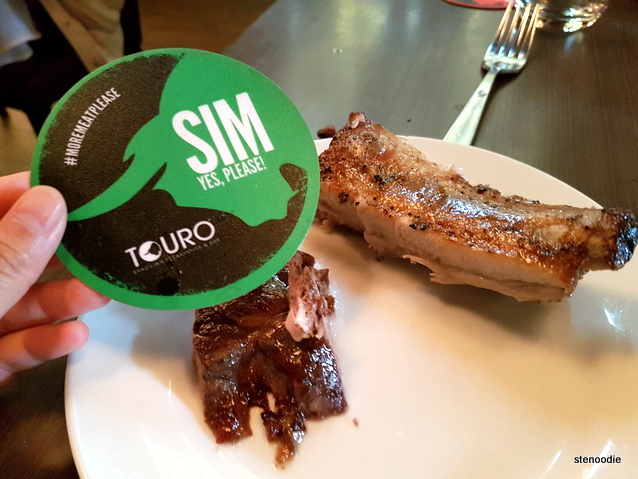 Once the Sim card was up, we immediately received two cuts of meat! It was so fast!

The Bacon-Wrapped Chicken Breast was surprisingly tender and moist.  It was quite good!

However, when it came to chicken, I liked the Chicken Legs more.  The meat was smooth and tender.  I did think it was a little over-salty though, even for my taste.

I didn’t notice the BBQ Chicken Wings that night….

The Picanha (cut of beef called sirloin cap in the U.S. that is popular in Brazil and referred to as the rump cover, rump cap or coulotte) had a very crispy skin and the meat was firm. 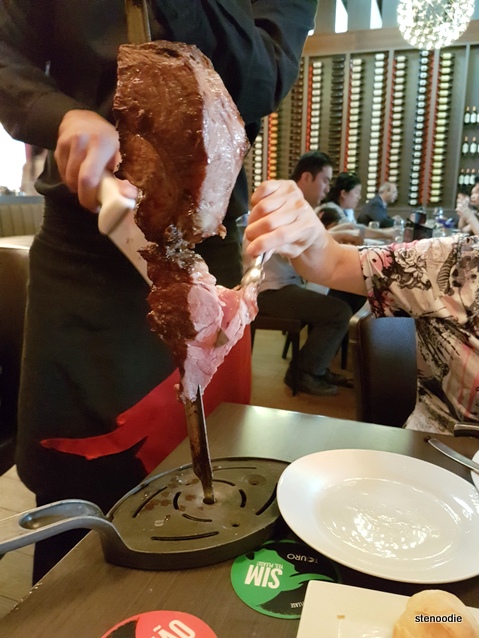 Getting a cut of the Picanha

I had to keep my eyes (and ears) open for the Parmesan Sirloin and Garlic Steak.  When our server stopped by to ask us if we needed anything or if we needed any specific cuts of meat, I asked for the Garlic Steak since I wasn’t sure which Gaucho was serving it (some of the meets looked the same from afar).  The Parmesan Sirloin was very good and tasty!  I really enjoyed how it had crunchy Parmesan grilled on top of the moist sirloin.  The Garlic Steak was very moist and juicy although the garlic wasn’t as strong as the Parmesan.

I also kept my eyes peeled for the Pork Sausage too.  This was just okay-tasting to me.

I found the Beef Short Ribs a bit rough to chew through. 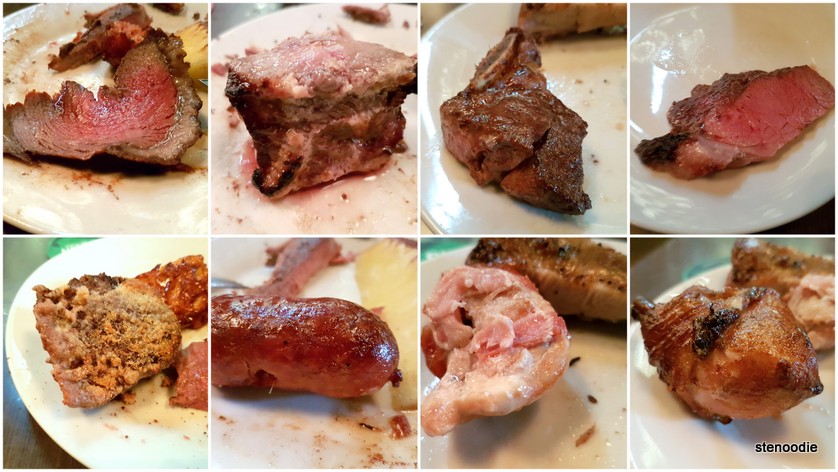 All of the the meats I had that night!

Out of the 12 meats that night (plus two special ones), I didn’t try the Flank Steak or Top Sirloin.  After a while, the abundant meats was really filling and I just couldn’t eat too much anymore. 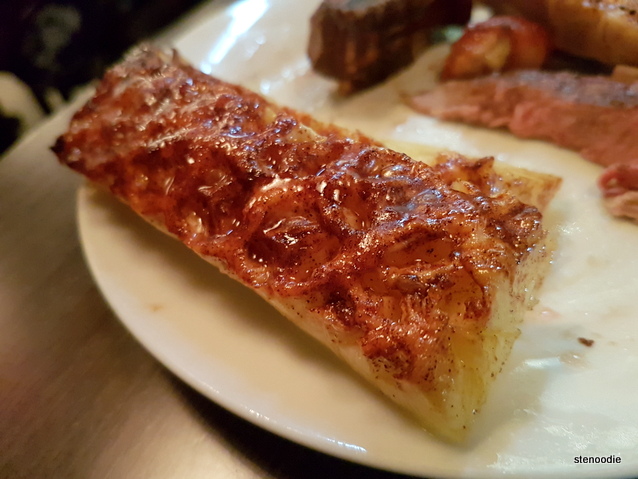 Last but not least, I’ll talk about the Grilled Pineapple (which was everyone’s favourite at the other Brazilian steakhouse too).  I had high expectations for it here because I knew it wouldn’t be a poor choice.  The Grilled Pineapple was actually out a lot and the gaucho didn’t fail to bring it out constantly.  This was a larger piece than I had experienced before at the other Brazilian steakhouse and not as sweet.  Their Grilled Pineapple is covered with cinnamon and sugar before being grilled so the exterior is crispy with a cinnamon and sugar crust. 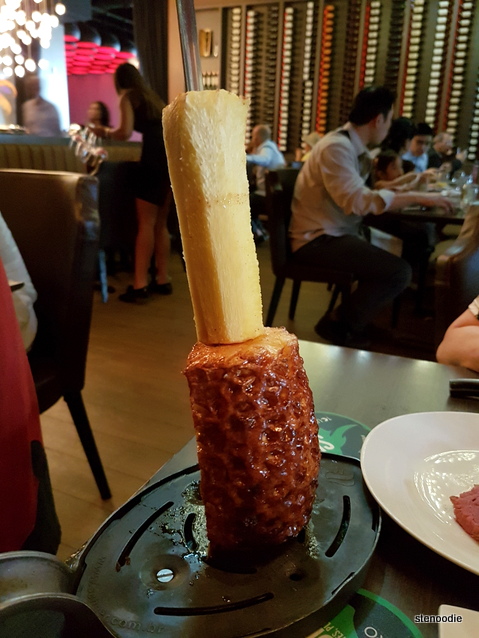 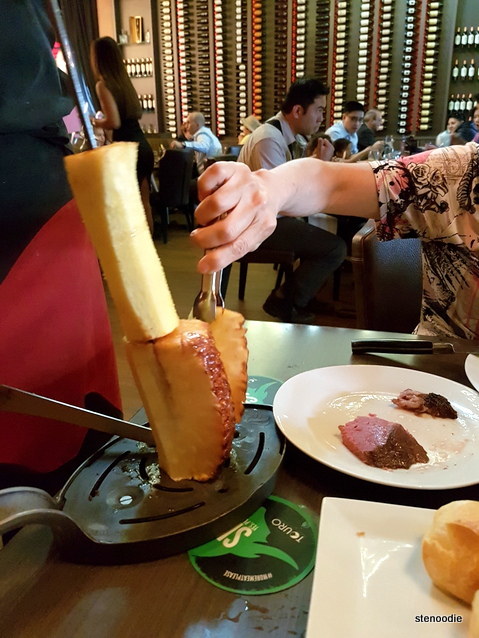 The slices were huge and thick 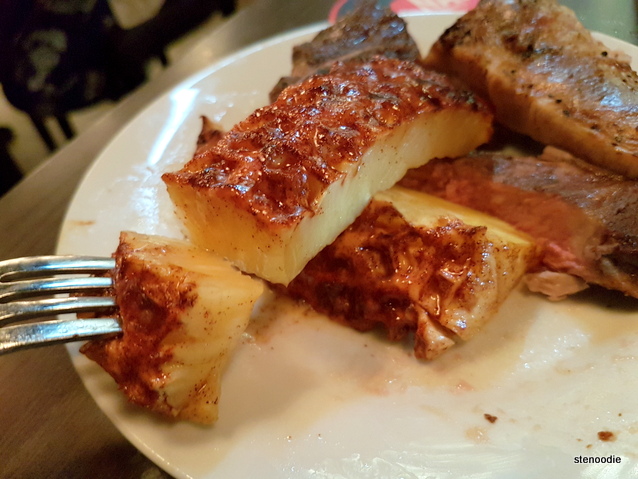 I found that all of the the portions here were larger than what I experienced at the other Brazilian steakhouse.  I preferred the smaller portions at the other restaurant since it meant you wouldn’t be too full after just one round.  The grilled pineapple portions were smaller there too, which I enjoyed more. 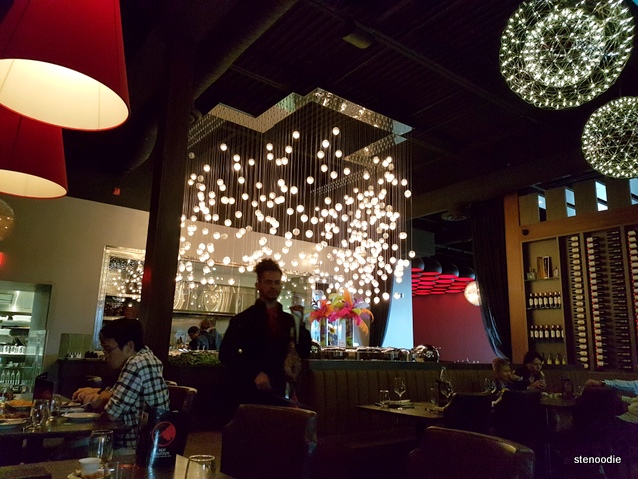 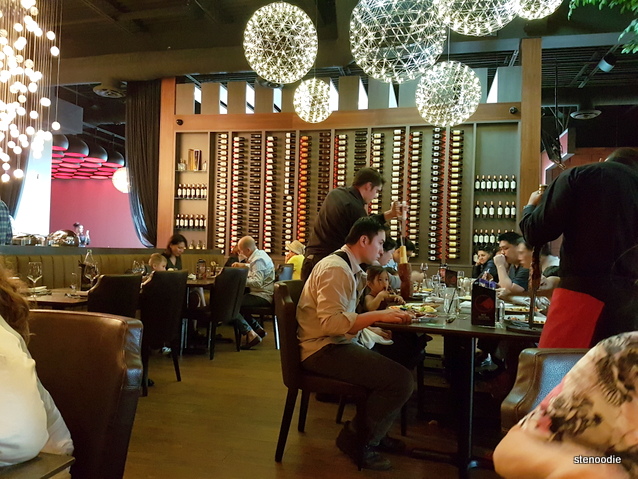 Our server also gave us a portion of cheese bread at the beginning of the meal which I loved!  These little morsels of cheese bread were so gooey, chewy, and cheesy!  I ate three. 😀 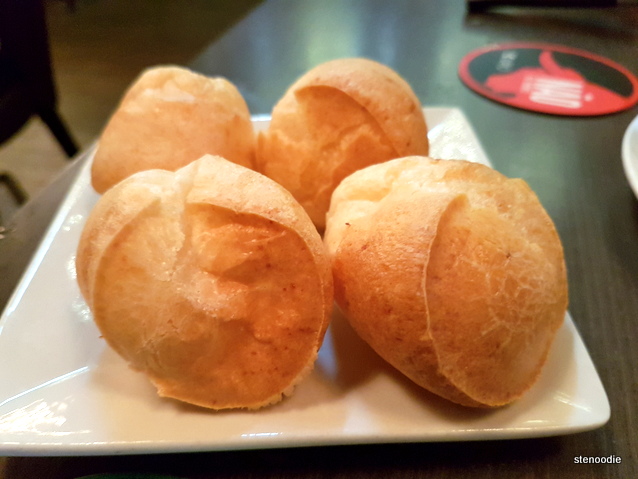 After about two hours’ time (the dining limit is two hours before 8:30 p.m on Saturday evenings and holidays), we were very stuffed.  I was really satisfied with everything that I tried and even though I didn’t try all of the cuts of meat, I was good to call it a day. 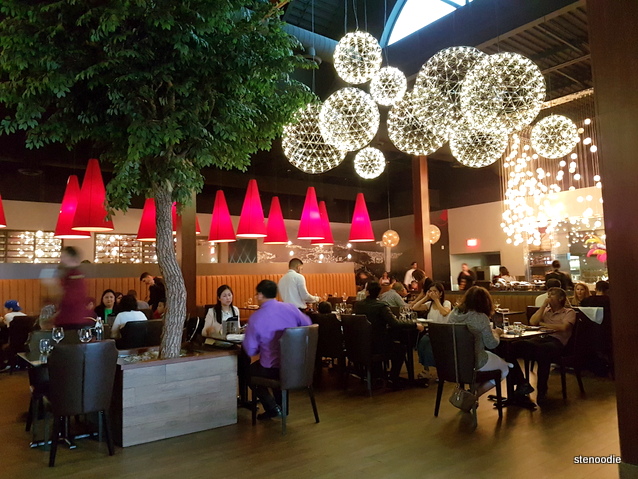 A snap of the dining area as I was leaving 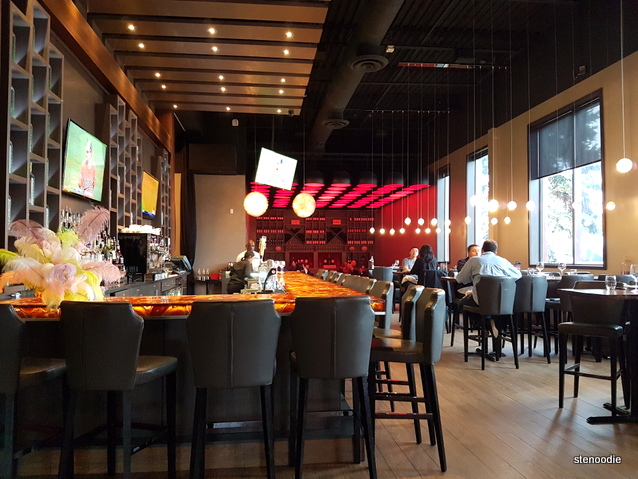 For a lighter fare, you can go to the Lava Bar for a selection of Brazilian appetizers and sandwiches

Thank you so much Jackie for hosting the contest and to Touro Brazilian Steakhouse for the comped meal! 🙂

FTC Disclaimer:  Although Touro Brazilian Steakhouse provided the meal free of charge via winning an online contest, the opinions expressed here represent my own and not those of the contest holder or restaurant.